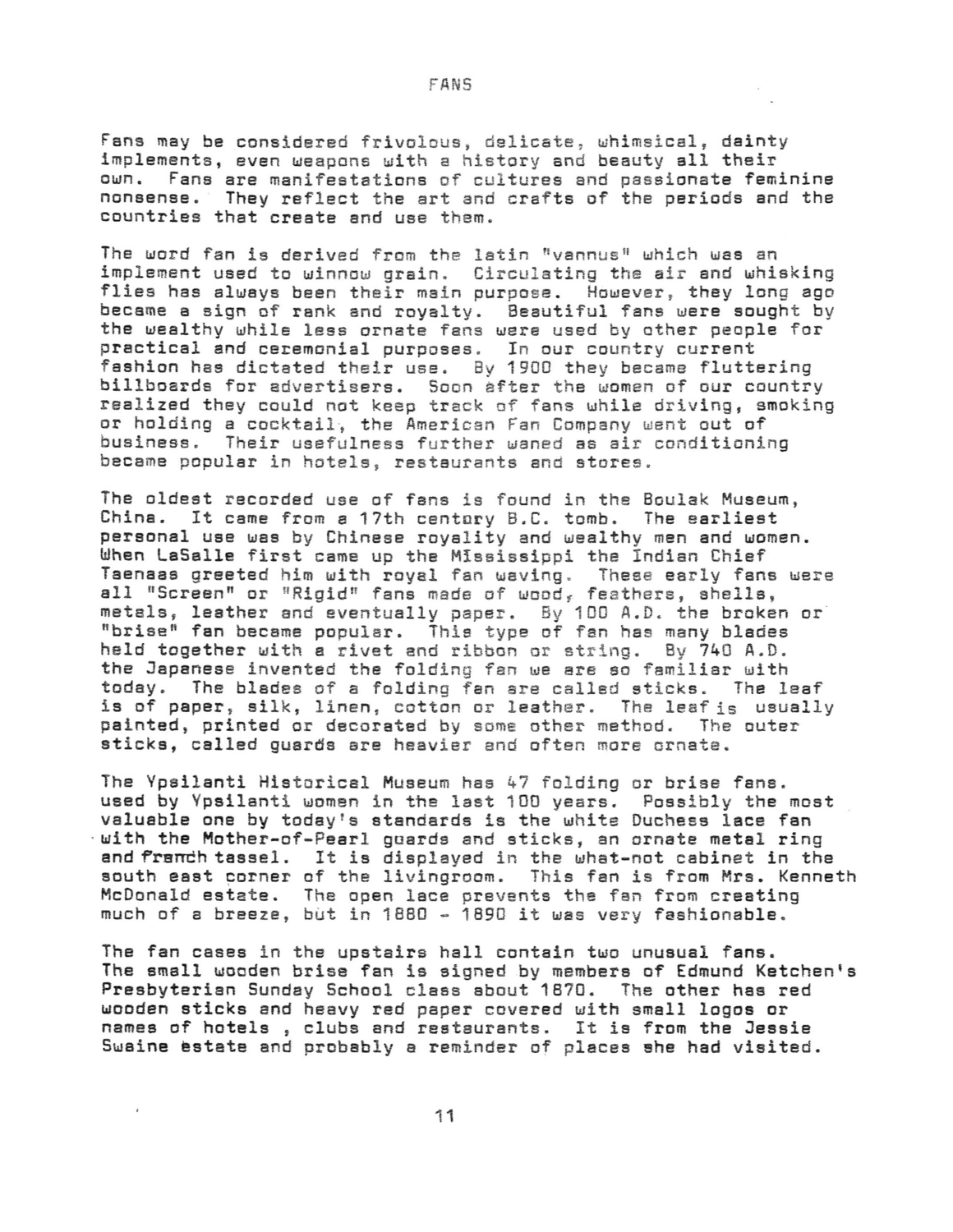 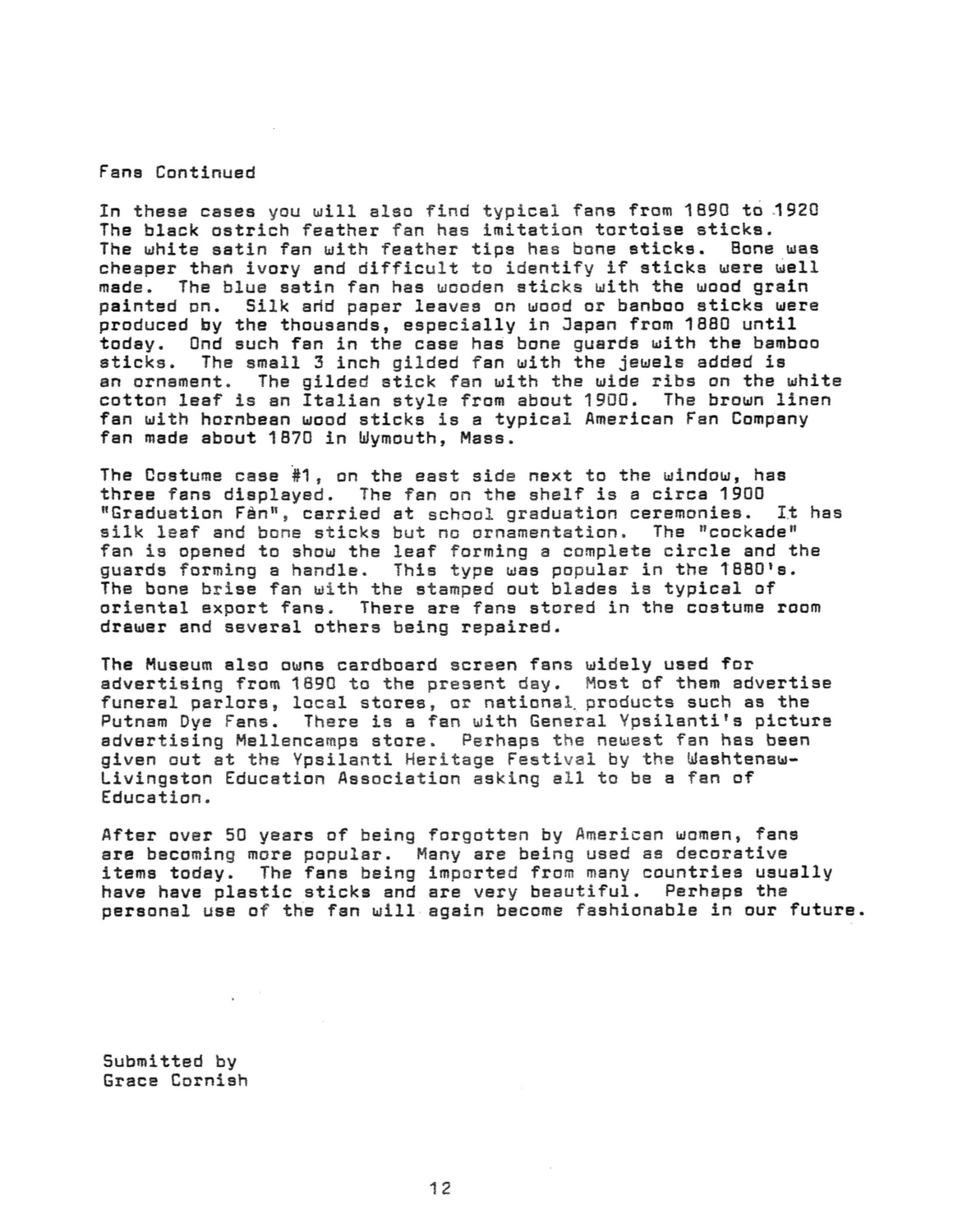 Fans may be considered frivolous, delicate, whimsical, dainty implements, even weapons with a history and beauty all their own. Fans are manifestations of cultures and passionate feminine nonsense. They reflect the art and crafts of the periods and the countries that create and use them.

The word fan is derived from the latin “vannus” which was an implement used to winnow grain. Circulating the air and whisking flies has always been their main purpose. However, they long ago became a sign of rank and royalty. Beautiful fans were sought by the wealthy while less ornate fans were used by other people for practical and ceremonial purposes. In our country current fashion has dictated their use. By 1900 they became fluttering billboards for advertisers. Soon after the women of our country realized they could not keep track of fans while driving, smoking or holding a cocktail, the American Fan Company went out of business. Their usefulness further waned as air conditioning became popular in hotels, restaurants and stores.

The oldest recorded use of fans is found in the Boulak Museum, China. It came from a 17th century B.C. tomb. The earliest personal use was by Chinese royality and wealthy men and women. When LaSalle first came up the Mississippi the Indian Chief Taenaas greeted him with royal fan waving. These early fans were all “Screen” or “Rigid” fans made of wood, feathers, shells, metals, leather and eventually paper. By 100 A.D. the broken or “brise” fan became popular. This type of fan has many blades held together with a rivet and ribbon or string. By 740 A.D. the Japanese invented the folding fan we are so familiar with today. The blades of a folding fan are called sticks. The leaf is of paper, silk, linen, cotton or leather. The leaf is usually painted, printed or decorated by some other method. The outer sticks, called guards are heavier and often more ornate.

The Ypsilanti Historical Museum has 47 folding or brise fans. used by Ypsilanti women in the last 100 years. Possibly the most valuable one by today's standards is the white Duchess lace fan with the Mother-of-Pearl guards and sticks, an ornate metal ring and french tassel. It is displayed in the what-not cabinet in the south east corner of the livingroom. This fan is from Mrs. Kenneth McDonald estate. The open lace prevents the fan from creating much of a breeze, but in 1880–1890 it was very fashionable.

The fan cases in the upstairs hall contain two unusual fans. The small wooden brise fan is signed by members of Edmund Ketchen's Presbyterian Sunday School class about 1870. The other has red wooden sticks and heavy red paper covered with small logos or names of hotels, clubs and restaurants. It is from the Jessie Swaine estate and probably a reminder of places she had visited. In these cases you will also find typical fans from 1890 to 1920 The black ostrich feather fan has imitation tortoise sticks. The white satin fan with feather tips has bone sticks. Bone was cheaper than ivory and difficult to identify if sticks were well made. The blue satin fan has wooden sticks with the wood grain painted on. Silk and paper leaves on wood or banboo sticks were produced by the thousands, especially in Japan from 1880 until today. One such fan in the case has bone guards with the bamboo sticks. The small 3 inch gilded fan with the jewels added is an ornament. The gilded stick fan with the wide ribs on the white cotton leaf is an Italian style from about 1900. The brown linen fan with hornbean wood sticks is a typical American Fan Company fan made about 1870 in Wymouth, Mass.

The Costume case #1, on the east side next to the window, has three fans displayed. The fan on the shelf is a circa 1900 “Graduation Fan”, carried at school graduation ceremonies. It has silk leaf and bone sticks but no ornamentation. The “cockade” fan is opened to show the leaf forming a complete circle and the guards forming a handle. This type was popular in the 1880's. The bone brise fan with the stamped out blades is typical of oriental export fans. There are fans stored in the costume room drawer and several others being repaired.

The Museum also owns cardboard screen fans widely used for advertising from 1890 to the present day. Most of them advertise funeral parlors, local stores, or national, products such as the Putnam Dye Fans. There is a fan with General Ypsilanti's picture advertising Mallencamps store. Perhaps the newest fan has been given out at the Ypsilanti Heritage Festival by the Washtenaw-Livingston Education Association asking all to be a fan of Education.

After over 50 years of being forgotten by American women, fans are becoming more popular. Many are being used as decorative items today. The fans being imported from many countries usually have have plastic sticks and are very beautiful. Perhaps the personal use of the fan will again become fashionable in our future.