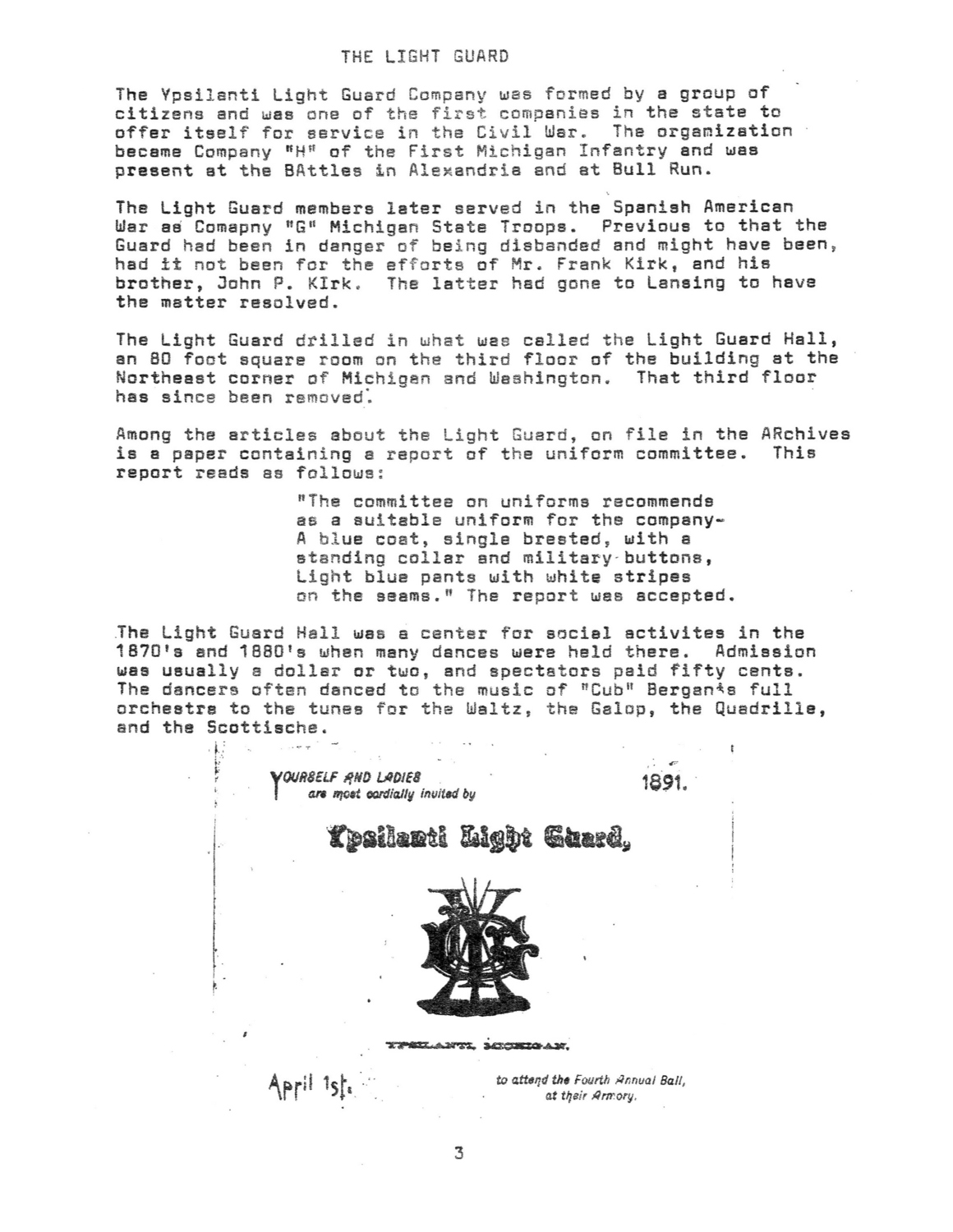 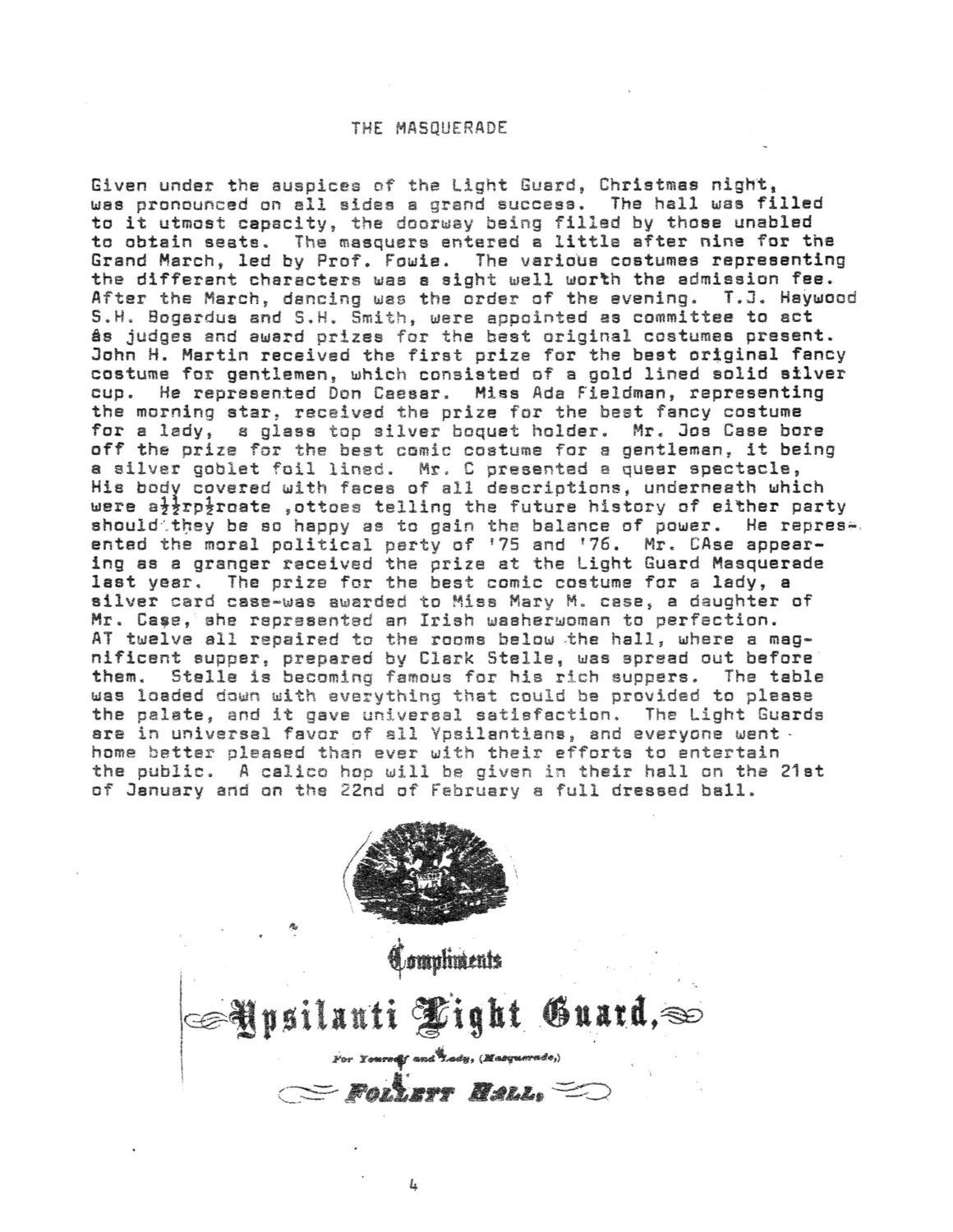 The Ypsilanti Light Guard Company was formed by a group of citizens and was one of the first companies in the state to offer itself for service in the Civil War. The organization became Company “H” of the First Michigan Infantry and was present at the Battles in Alexandria and at Bull Run.

The Light Guard members later served in the Spanish American War as Company “G” Michigan State Troops. Previous to that the Guard had been in danger of being disbanded and might have been, had it not been for the efforts of Mr. Frank Kirk, and his brother, John P. KIrk. The latter had gone to Lansing to have the matter resolved.

The Light Guard drilled in what was called the Light Guard Hall, an 80 foot square room on the third floor of the building at the Northeast corner of Michigan and Washington. That third floor has since been removed.

Among the articles about the Light Guard, on file in the ARchives is a paper containing a report of the uniform committee. This report reads as followe:

“The committee on uniforms recommends as a suitable uniform for the company-A blue coat, single brested, with a standing collar and military buttons, Light blue pants with white stripes on the seams.” The report was accepted.

The Light Guard Hall was a center for social activites in the 1870's and 1880's when many dances were held there. Admission was usually a dollar or two, and spectators paid fifty cents. The dancers often danced to the music of “Cub” Bergants full orchestrs to the tunes for the Waltz, the Galop, the Quadrille, and the Scottische.

are most cardially invited by 1891.

Given under the auspices of the Light Guard, Christmas night, was pronounced on all sides a grand success. The hall was filled to it utmost capacity, the doorway being filled by those unabled to obtain seats. The masquers entered a little after nine for the Grand March, led by Prof. Fowie. The various costumes representing the different characters was a sight well worth the admission fee. After the March, dancing was the order of the evening. T.J. Haywood S.H. Bogardus and S.H. Smith, were appointed as committee to act as judges and award prizes for the best original costumes present. John H. Martin received the first prize for the best original fancy costume for gentlemen, which consisted of a gold lined solid silver cup. He represented Don Cassar. Miss Ade Fieldman, representing the morning star, received the prize for the best fancy costume for a lady, a glass top silver boquet holder. Mr. Jos Case bore off the prize for the best comic costume for a gentleman, it being a silver goblet foil lined. Mr. C presented a queer spectacle, His body covered with faces of all descriptions, underneath which were appropriate mottoes telling the future history of either party should they be so happy as to gain the balance of power. He represented the moral political party of ‘75 and ‘76. Mr. Case appearing as a granger received the prize at the Light Guard Masquerade last year. The prize for the best comic costume for a lady, a silver card case-was awarded to Miss Mary M. case, a daughter of Mr. Case, she represented an Irish washerwoman to perfection. At twelve all repaired to the rooms below the hall, where a magnificent supper, prepared by Clark Stelle, was apread out before them. Stelle is becoming famous for his rich suppers. The table was loaded down with everything that could be provided to please the palate, and it gave universal satisfaction. The Light Guards are in universal favor of all Ypsilantians, and everyone went home better pleased than ever with their efforts to entertain the public. A calico hop will be given in their hall on the 21st of January and on the 22nd of February a full dressed ball.

View an image of a Civil War Re-Enlistment Receipt for Henry Davis, 1864 in our Gleanings image gallery.