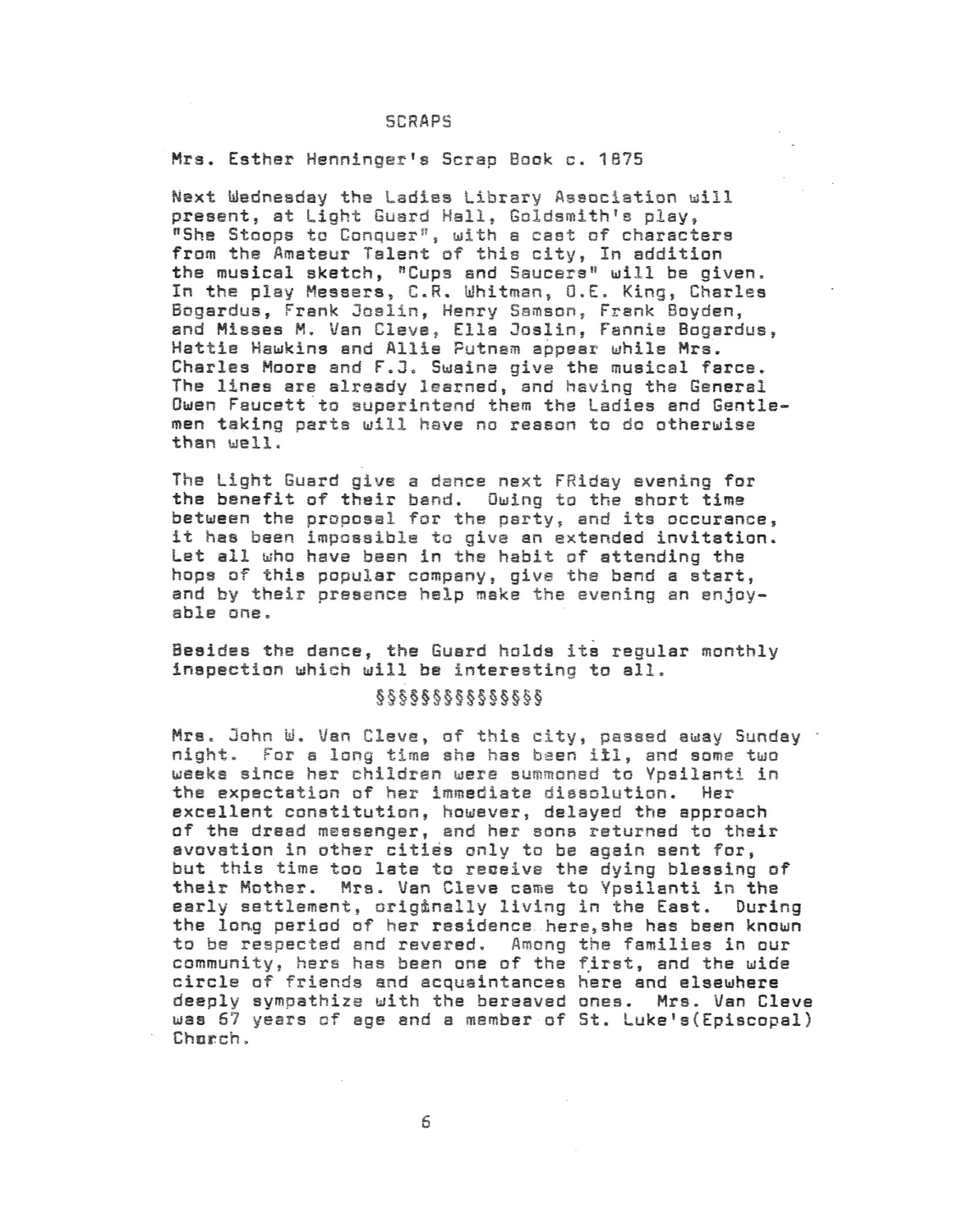 Next Wednesday the Ladies Library Association will present, at Light Guard Hall, Goldsmith's play, “She Stoops to Conquer”, with a cast of characters from the Amateur Talent of this city, In addition the musical sketch, “Cups and Saucers” will be given, In the play Messers, C.R. Whitman, O.E. King, Charles Bogardus, Frank Joslin, Henry Samson, Frank Boyden, and Misses M. Van Cleve, Ella Joslin, Fannie Bogardus, Hattie Hawkins and Allis Putnam appear while Mrs. Charles Moore and F.J. Swaine give the musical farce. The lines are already learned, and having the General Owen Faucett to superintend them the Ladies and Gentlemen taking parts will have no reason to do otherwise than well.

The Light Guard give a dance next Friday evening for the benefit of their band. Owing to the short time between the proposal for the party, and its occurance, it has been impossible to give an extended invitation. Let all who have been in the habit of attending the hops of this popular company, give the band a start, and by their presence help make the evening an enjoyable one.

Besides the dance, the Guard holds its regular monthly inspection which will be interesting to all.

Mrs. John W. Van Cleve, of this city, passed away Sunday night. For a long time she has been ill, and some two weeks since her children were summoned to Ypsilanti in the expectation of her immediate dissolution. Her excellent constitution, however, delayed the approach of the dread messenger, and her sons returned to their avovation in other cities only to be again sent for, but this time too late to receive the dying blessing of their Mother. Mrs. Van Cleve came to Ypsilanti in the early settlement, originally living in the East. During the long period of her residence here, she has been known to be respected and revered. Among the families in our community, hers has been one of the first, and the wide circle of friends and acquaintances here and elsewhere deeply sympathize with the bereaved ones. Mrs. Van Cleve was 67 years of age and a member of St. Luke's(Episcopal) Church.