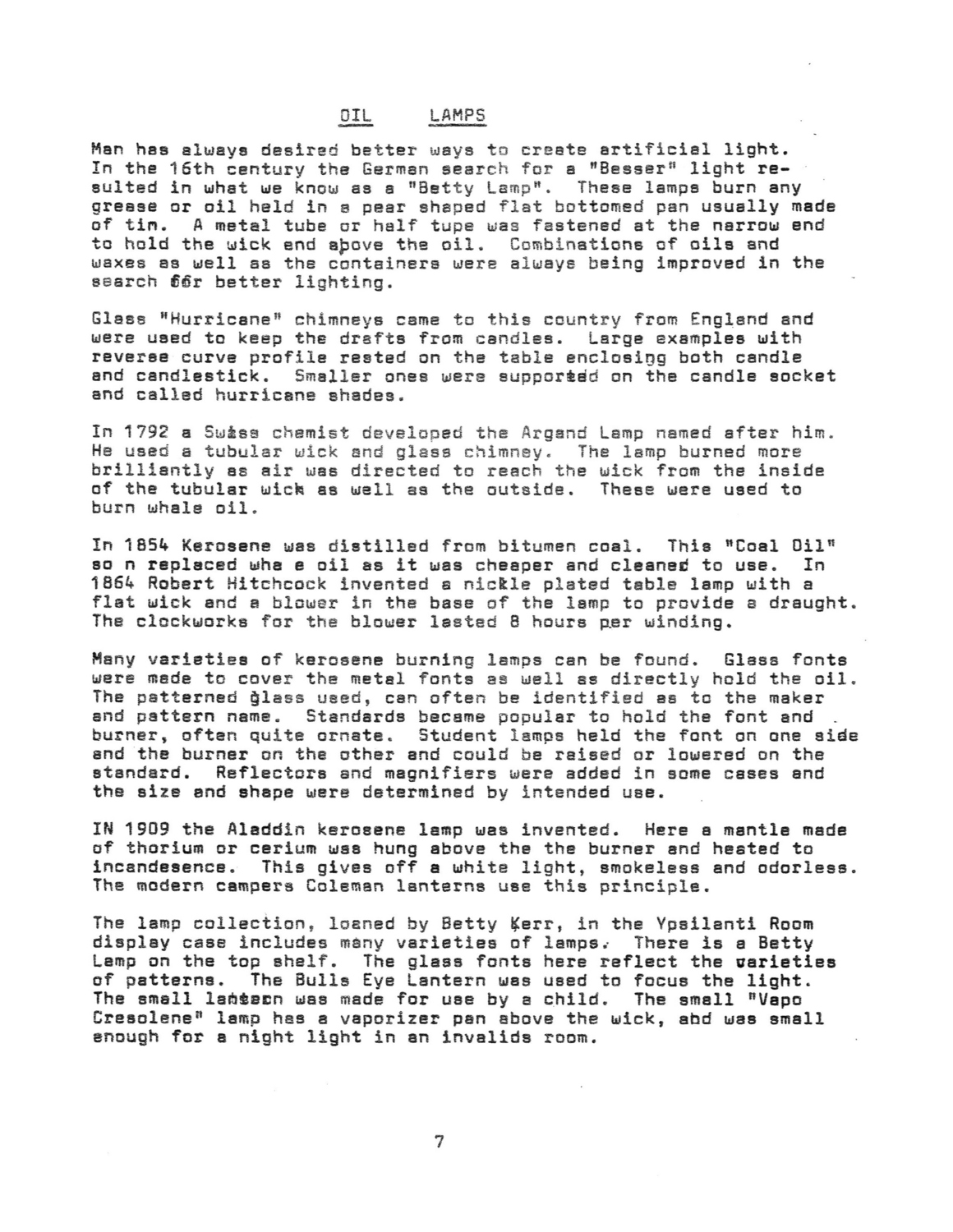 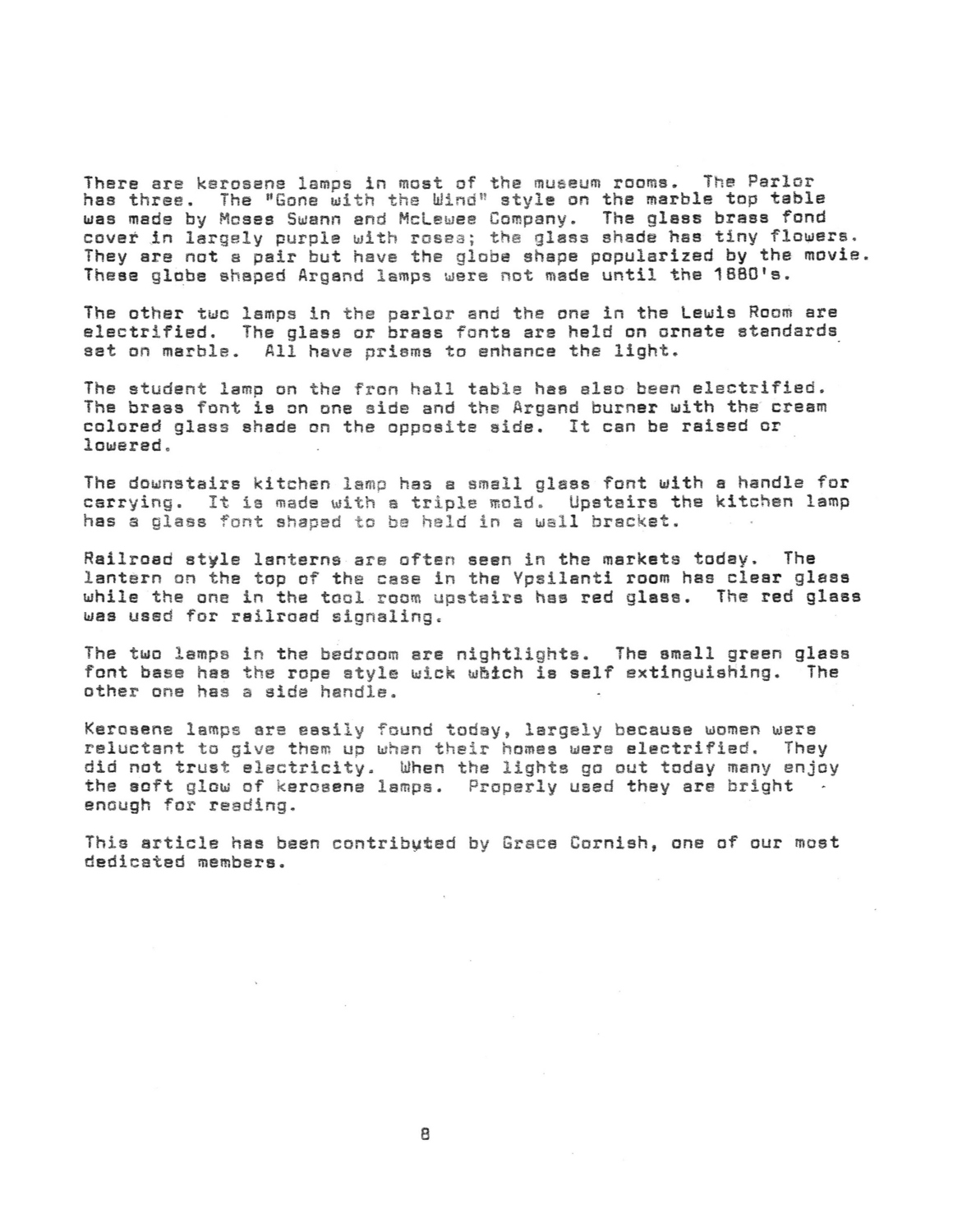 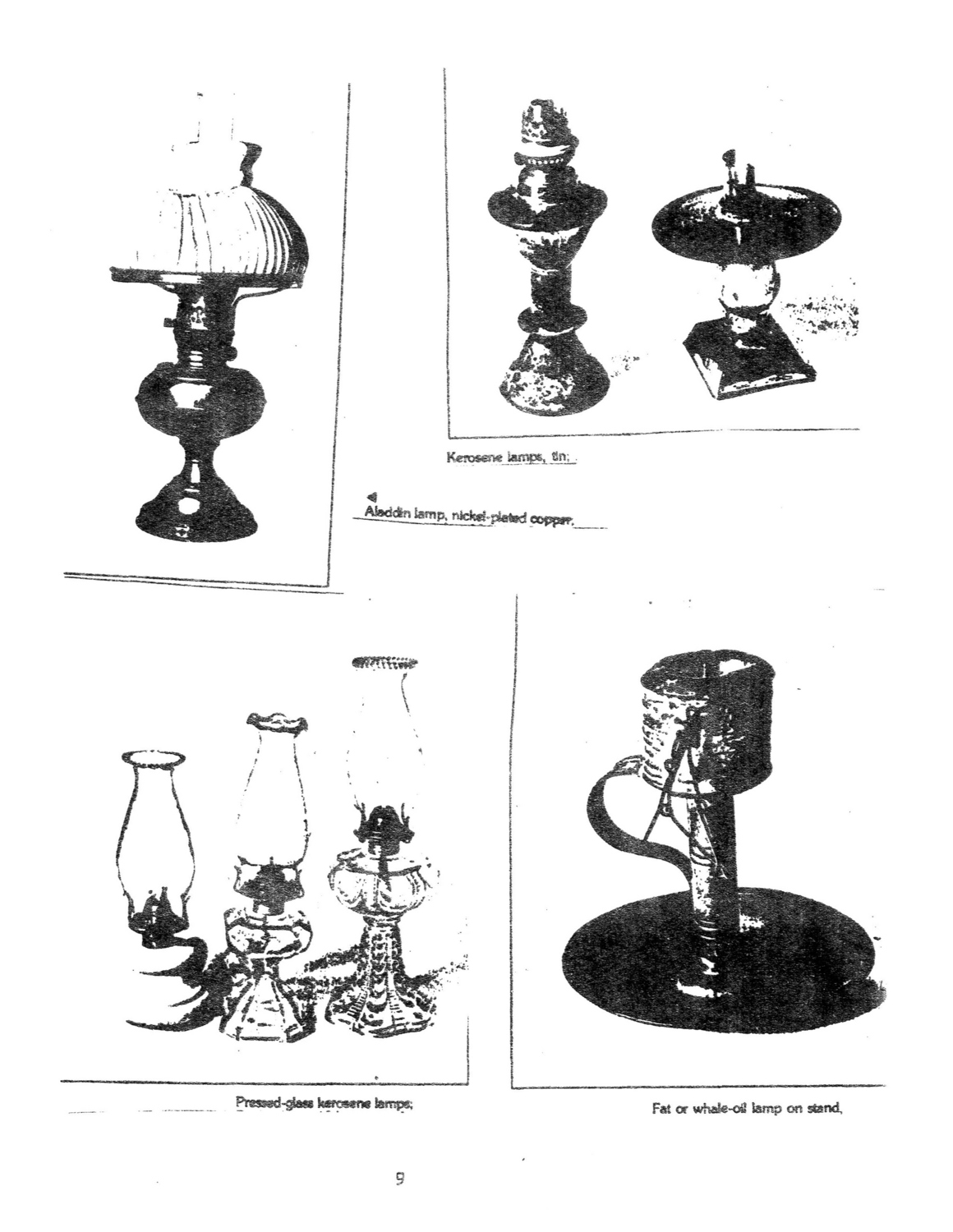 Man has always desired better ways to create artificial light. In the 16th century the German search for a “Besser” light resulted in what we know as a “Betty Lamp”. These lamps burn any grease or oil held in a pear shaped flat bottomed pan usually made of tim. A metal tube or helf tupe was fastened at the narrow and to hold the wick end above the oil. Combinations of oils and waxes as well as the containers were always being improved in the search for better lighting.

Glass “Hurricane” chimneys came to this country from England and were used to keep the drafts from candles. Large examples with reverse curve profile rested on the table enclosing both candle and candlestick. Smaller ones were supported on the candle socket and called hurricane shades

In 1792 a Swtes chemist developed the Argand Lamp named after him. He used a tubular wick and glass chimney. The lamp burned more brilliantly as air was directed to reach the wick from the inside of the tubular wich as well as the outside. These were used to burn whale oil.

In 1854 Kerosene was distilled from bitumen coal. This “Coal Oil” so n replaced whale oil as it was cheaper and cleaner to use. In 1864 Robert Hitchcock invented a nickle plated table lamp with a flat wick and a blowar in the base of the lamp to provide a draught. The clockworks for the blower lasted 8 hours per winding.

Many varieties of kerosene burning lamps can be found. Glass fonts were made to cover the metal fonts as well as directly hold the oil. The patterned glass used, can often be identified as to the maker and pattern name. Standards became popular to hold the font and burner, often quite ornate. Student lamps held the font on one side and the burner on the other and could be raised or lowered on the standard. Reflectors and magnifiers were added in some cases and the size and shape were determined by intended use.

IN 1909 the Aladdin kerosene lamp was invented. Here a mantle made of thorium or cerium was hung above the the burner and heated to incandesence. This gives off a white light, smokeless and odorless. The modern campers Coleman lanterns use this principle.

The lamp collection, loaned by Betty Kerr, in the Ypsilsnti Room display case includes many varieties of lamps. There is a Betty temp on the top shelf. The glass fonts here reflect the varieties of patterns. The Bulls Eye Lantern was used to focus the light. The small lansecn was made for use by a child. The small “Vapo Cresolene” lamp has a vaporizer pan above the wick, and was small enough for a night light in an invalids room.

There are kerosene lamps in most of the museum rooms. The Parlor has three. The “Gone with the Wind” style on the marble top table was made by Moses Swann and McLawee Company. The glass brass fond cover in largely purple with rosea; the glass shade has tiny flowers. They are not a pair but have the globe shape popularized by the movie. These globe shaped Argand lamps were not made until the 1680's.

The other two lamps in the parlor and the one in the Lewis Room are electrified. The glass or brass fonts are held on ornate standards sat on marble. All have prisms to enhance the light.

The student lamp on the fron hall table has also been electrified. The brass font is on one side and the Argand burner with the cream colored glass shade on the opposite side. It can be raised or lowered.

Railroad style lanterns are often seen in the markets today. The lantern on the top of the case in the Ypsilanti room has clear glass while the one in the tool room upstairs has red glass. The red glass was used for reilroad signaling.

The two lamps in the bedroom are nightlights. The small green glass font base has the rope style wick which is self extinguishing. The other one has a side handle.

Kerosens lamps are easily found today, largely because women were reluctant to give them up when their homes were electrified. They did not trust electricity. When the lights go out today many enjoy the soft glow of kerosene lamps. Proparly used they are brigh enough for reading.

This article has been contributed by Grace Cornish, one of our most dedicated members.

Fat or whale-oil lamp on stand.