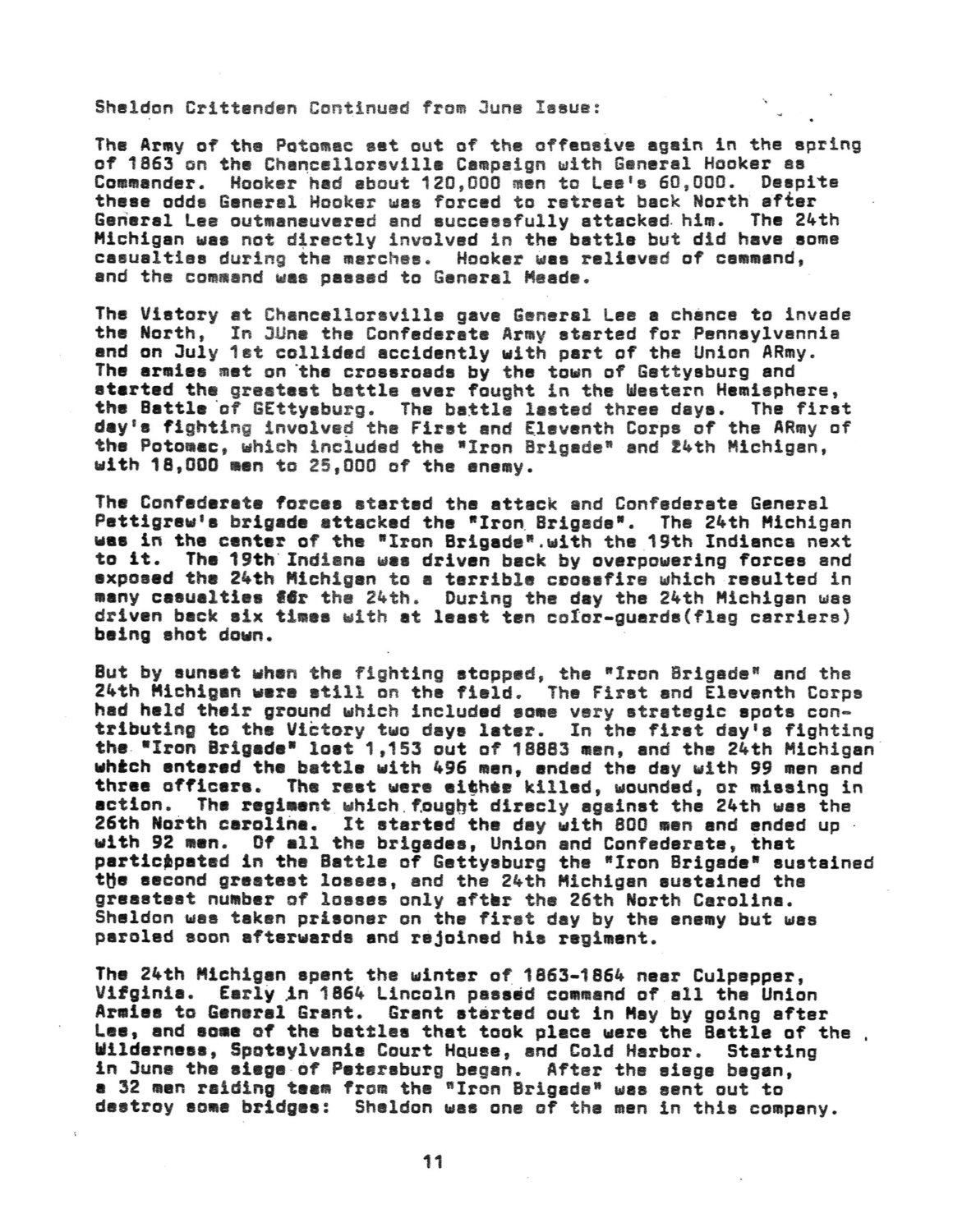 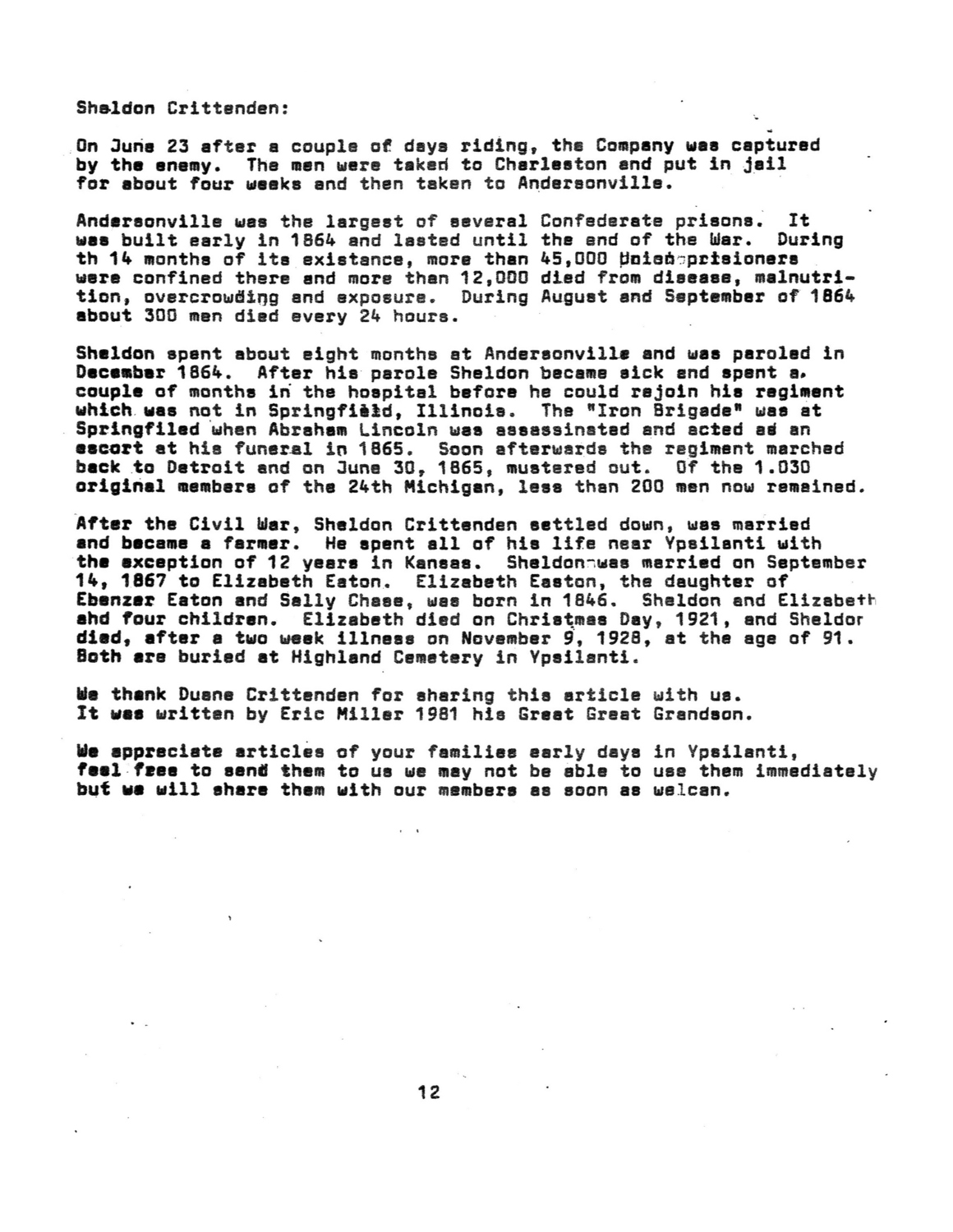 The Army of the Potomac set out of the offensive again in the spring of 1863 on the Chancellorsville Campaign with General Hooker as Commander. Hooker had about 120,000 men to Lee's 60,000. Despite these odds General Hooker was forced to retreat back North after General Lee out maneuvered and successfully attacked him. The 24th Michigan was not directly involved in the battle but did have some casualties during the marches. Hooker was relieved of command, and the command was passed to General Meade.

The Vistory at Chancellorsville gave General Lee a chance to invade the North, In June the Confederate Army started for Pennaylvannia and on July 1st collided accidently with part of the Union Army. The armies met on the crossroads by the town of Gettysburg and started the greatest battle ever fought in the Western Hemisphere, the Battle of GEttysburg. The battle lasted three days. The first day's fighting involved the First and Eleventh Corps of the ARmy of the Potomac, which included the “Iron Brigade” and 24th Michigan, with 18,000 men to 25,000 of the enemy.

The Confederate forces started the attack and Confederate General Pettigrew's brigade attacked the “Iron Brigede”. The 24th Michigan was in the center of the “Iron Brigade”. with the 19th Indiancs next to it. The 19th Indiana was driven back by overpowering forces and exposed the 24th Michigan to a terrible coossfire which resulted in many casualties for the 24th. During the day the 24th Michigan was driven back six times with at least ten color-guards (flag carriers) being shot down.

But by sunset when the fighting stopped, the “Iron Brigade” and the 24th Michigan were still on the field. The First and Eleventh Corps had held their ground which included some very strategic spots contributing to the Victory two days later. In the first day's fighting the “Iron Brigade” lost 1,153 out of 18883 men and the 24th Michigan which entered the battle with 496 men, ended the day with 99 men and three officars. The rest were sithee killed, wounded, or missing in action. The regiment which fought direcly against the 24th was the 26th North caroline. It started the day with 800 men and ended up with 92 men. Of all the brigades, Union and Confederate, that particepated in the Battle of Gettysburg the “Iron Brigade” sustained the second greatest losses, and the 24th Michigan eustained the greastest number of losses only after the 26th North Carolins. Sheldon was taken prisoner on the first day by the enemy but was paroled soon afterwards and rejoined his regiment.

The 24th Michigan spent the winter of 1863–1864 near Culpepper, Vifginis. Early in 1864 Lincoln passed command of all the Union Armies to General Grant. Grant started out in May by going after Lee, and some of the battles that took place were the Bettle of the Wilderness, Spotsylvanie Court House, and Cold Harbor. Starting in June the siege of Petersburg began. After the siege began, a 32 men raiding team from the “Iron Brigade” was sent out to destroy some bridges: Sheldon was one of the men in this company.

On June 23 after a couple of days riding, the Company was captured by the enemy. The men were taken to Charleston and put in jail for about four weeks and then taken to Andersonville.

Andersonville was the largest of several Confederate prisons. It was built early in 1864 and lasted until the and of the War. During th 14 months of its existance, more than 45,000 Union prisioners were confined there and more than 12,000 died from disease, malnutrition, overcrowding and exposure. During August and September of 1864 about 300 men died every 24 hours.

Sheldon spent about eight months at Andersonville and was paroled in December 1864. After his parole Sheldon became sick and spent a, couple of months in the hospital before he could rejoin his regiment which was not in Springfield, Illinois. The “Iron Brigade” was at Springfiled when Abraham Lincoln was assassinated and acted as an escort at his funeral in 1865. Soon afterwards the regiment marched back to Detroit and on June 30, 1865, mustered out. Of the 1.030 original members of the 24th Michigan, less than 200 men now remained.

After the Civil War, Sheldon Crittenden settled down, was married and became a farmer. He spent all of his life near Ypsilanti with the exception of 12 years in Kanses. Sheldon was married on September 14, 1867 to Elizebeth Eaton. Elizabeth Easton, the daughter of Ebenzer Eaton and Sally Chase, was born in 1846. Sheldon and Elizabet and four children. Elizabeth died on Christmas Day, 1921, and Sheldon died, after a two week illness on November 9, 1928, at the age of 91. Both are buried at Highland Cemetery in Ypsilanti.

We thank Duane Crittenden for sharing this article with us. It was written by Eric Miller 1981 his Great Great Grandson.

We appreciate articles of your families early days in Ypsilanti, feel free to send them to us we may not be able to use them immediately but we will share them with our members as soon as welcan.