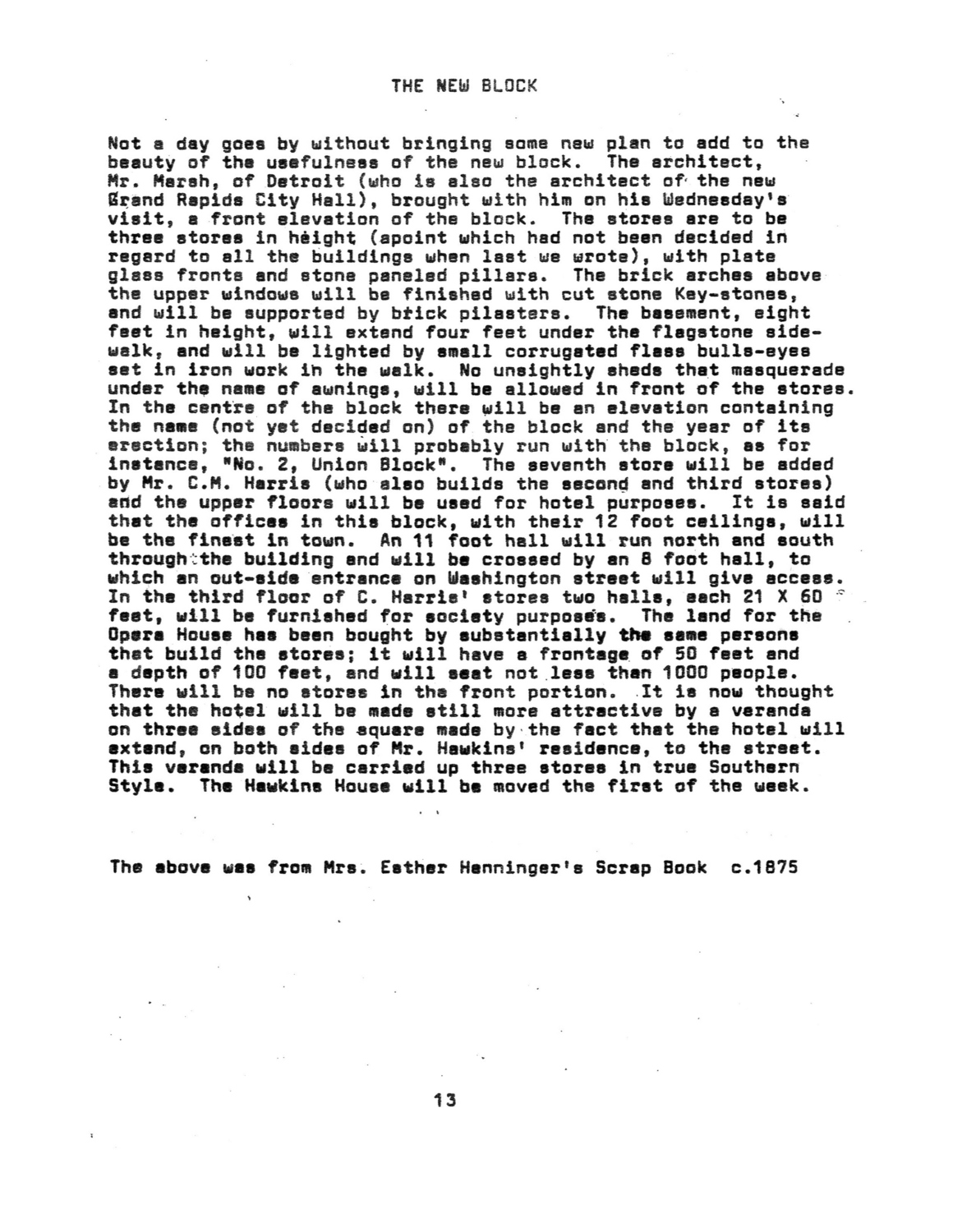 Not a day goes by without bringing some naw plan to add to the beauty of the usefulness of the new block. The architect, Mr. March, of Detroit (who is also the architect of the new Grand Rapids City Hall), brought with him on his Wednesday's visit, a front elevation of the block. The stores are to be three stores in height (apoint which had not been decided in regard to all the buildings when last we wrote), with plate glass fronts and stone paneled pillars. The brick arches above the upper windows will be finished with cut stone Key-stones, and will be supported by brick pilasters. The basement, eight feet in height, will extend four feet under the flagstone sidewalk, and will be lighted by small corrugated flass bulls-eyes set in iron work in the walk. No unsightly sheds that masquerade under the name of awnings, will be allowed in front of the stores. In the centre of the block there will be an elevation containing the name (not yet decided on) of the block and the year of its erection; the numbers will probably run with the block, as for instance, “No. 2, Union Block”. The seventh store will be added by Mr. C.M. Harris (who also builds the second and third stores) and the upper floors will be used for hotel purposes. It is said that the offices in this block, with their 12 foot ceilings, will be the finest in town. An 11 foot hall will run north and south through the building and will be crossed by an 8 foot hall, to which an out-side entrance on Washington street will give access. In the third floor of C. Harris' stores two halls, each 21 × 60 feet, will be furnished for society purposes. The land for the Opers House has been bought by substantially the same persons that build the stores; it will have a frontage of 50 feet and a depth of 100 feet, and will seat not less than 1000 people. There will be no stores in the front portion. It is now thought that the hotel will be made still more attractive by a veranda on three sides of the square made by the fact that the hotel will extand, on both sides of Mr. Hawkins' residence, to the street. This verands will be carried up three stores in true Southern Style. The Hawkins House will be moved the first of the week.

The above was from Mrs. Esther Henninger's Scrap Book c. 1875