From the Archives: A Letter from Henry Buck 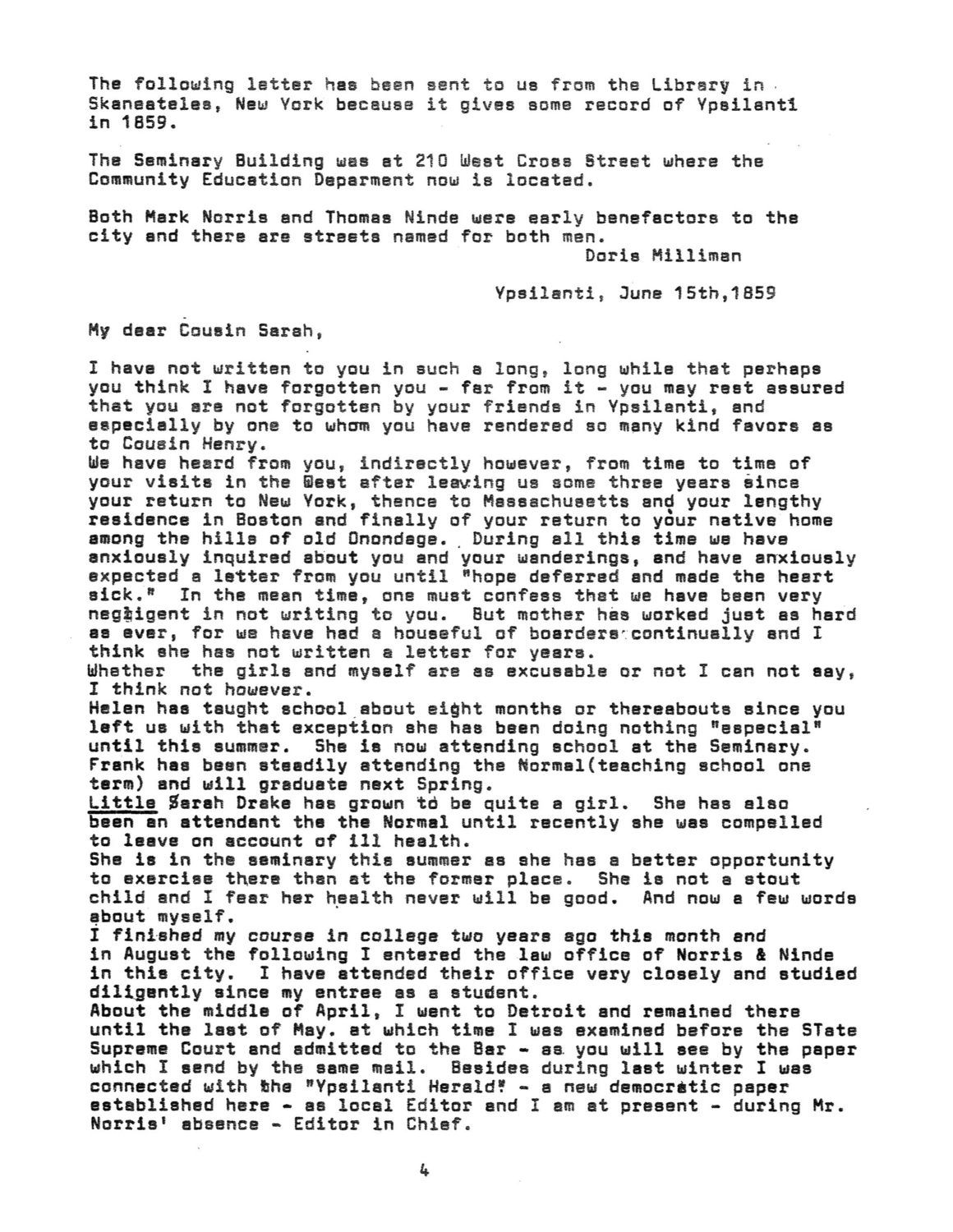 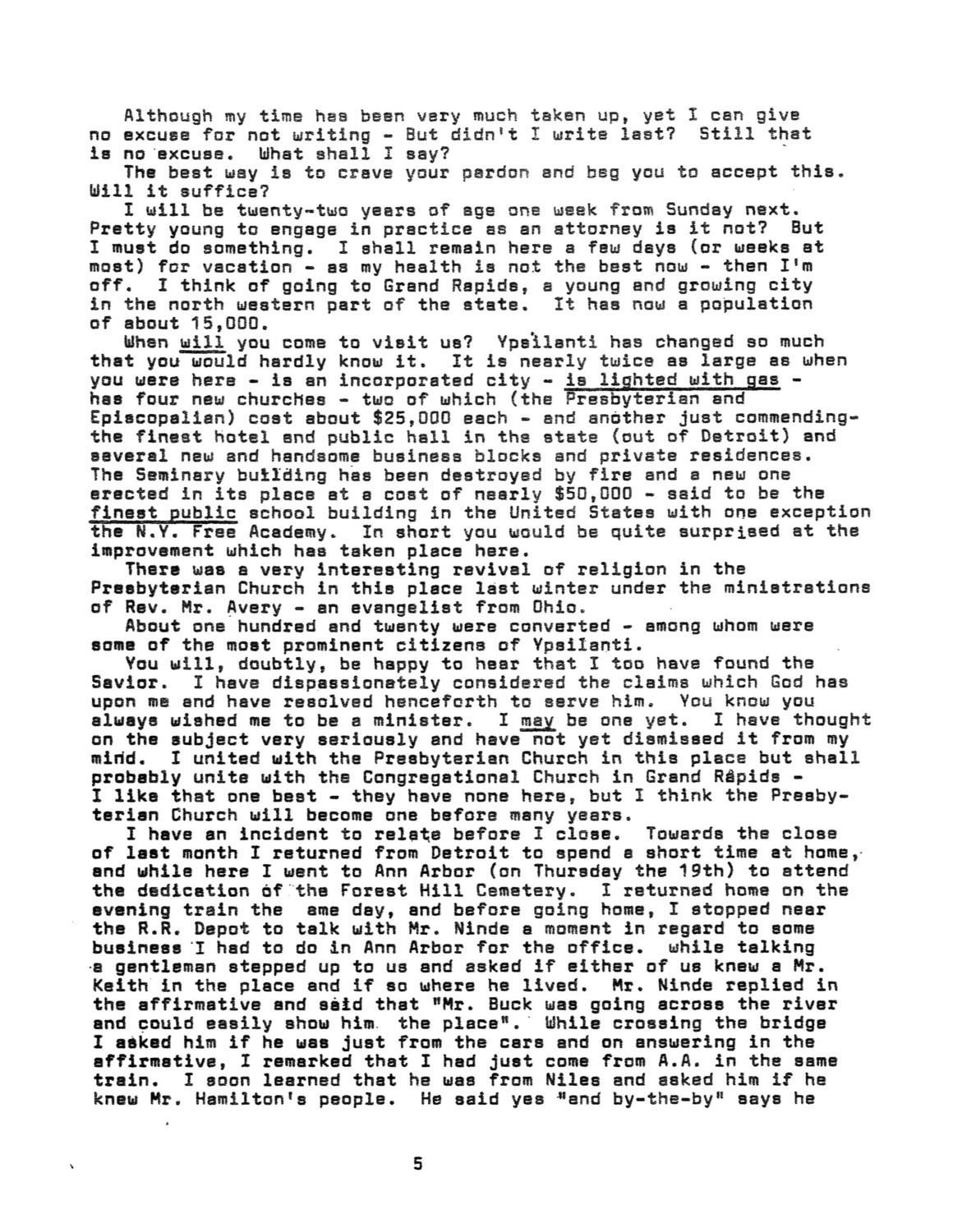 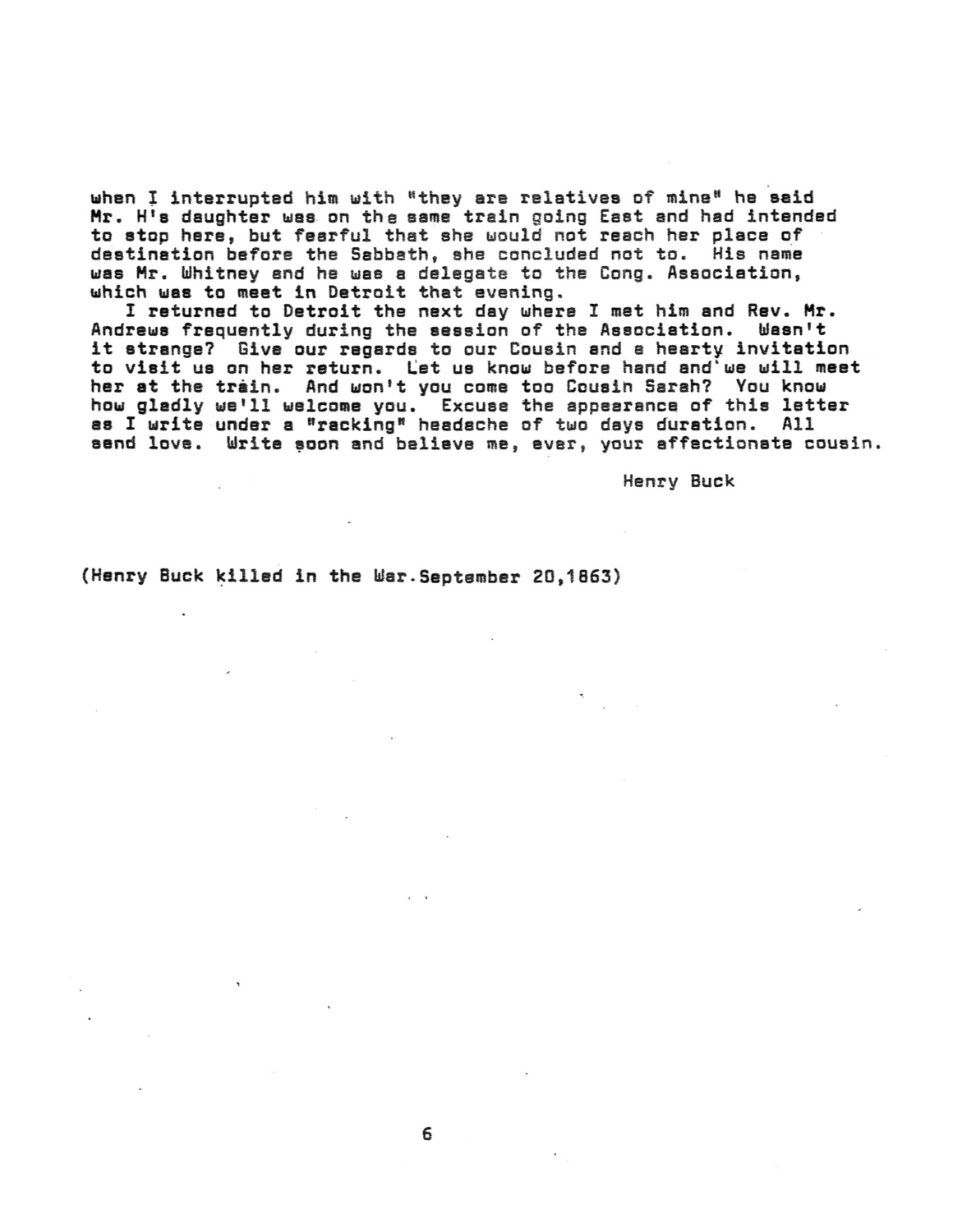 The following letter has been sent to us from the Library in Skaneateles, New York because it gives some record of Ypsilanti in 1859.

The Seminary Building was at 210 West Cross Street where the Community Education Department now is located.

Both Mark Norris and Thomas Ninde were early benefactors to the city and there are streets named for both men. ~Doris Milliman

I have not written to you in such a long, long while that perhaps you think I have forgotten you-far from it-you may rest assured that you are not forgotten by your friends in Ypsilanti, and especially by one to whom you have rendered so many kind favors as to Cousin Henry.

We have heard from you, indirectly however, from time to time of your visits in the West after leaving us some three years since your return to New York, thence to Massachusetts and your lengthy residence in Boaton and finally of your return to your native home among the hills of old Onondaga. During all this time we have anxiously inquired about you and your wanderings, and have anxiously expected a letter from you until “hope deferred and made the heart sick.” In the mean time, one must confess that we have been very negligent in not writing to you. But mother has worked just as hard as ever, for we have had a houseful of boarders continually and I think she has not written a letter for years.

Whether the girls and myself are as excusable or not I can not say, I think not however.

Helen has taught school about eight months or thereabouts since you left us with that exception she has been doing nothing “especial” until this summer. She is now attending school at the Seminary.

Frank has been steadily attending the Normal (teaching school one term) and will graduate next Spring.

Little Sarah Drake has grown to be quite a girl. She has also been an attendant the the Normal until recently she was compelled to leave on sccount of ill health.

She is in the seminary this summer as she has a better opportunity to exercise there than at the former place. She is not a stout child and I fear her health never will be good. And now a few words about myself.

I finished my course in college two years ago this month and in August the following I entered the law office of Norris & Ninde in this city. I have attended their office very closely and studied diligently since my entree as a student.

About the middle of April, I went to Detroit and remained there until the last of May. at which time I was examined before the STate Supreme Court and admitted to the Bar-as you will see by the paper which I send by the same mail. Besides during last winter I was connected with the “Ypsilanti Herald”-a new democratic paper established here-as local Editor and I am at present-during Mr. Norris' absence-Editor in Chief.

Although my time has been vary much taken up, yet I can give no excuse for not writing-But didn't I write last? Still that is no excuse. What shall I say?

The best way is to crave your pardon and bag you to accept this. Will it suffice?

I will be twenty-two years of age one week from Sunday next. Pretty young to engage in practice as an attorney is it not? But I must do something. I shall remain here a few days (or weeks at most) for vacation-as my health is not the best now-then I'm off. I think of going to Grand Rapids, a young and growing city in the north western part of the state. It has now a population of about 15,000.

When will you come for visit us? Ypsilanti has changed so much that you would hardly know it. It is nearly twice as large as when you were here-is an incorporated city-is, lighted with gas-has four new churches-two of which (the Presbyterian and Episcopalian) cost about $25,000 each-and another just commending-the finest hotel and public hall in the state (out of Detroit) and several new and handsome business blocks and private residences. The Seminary building has been destroyed by fire and a new one erected in its place at a cost of nearly $50,000-said to be the finest public school building in the United States with one exception the N.Y. Free Academy. In short you would be quite surprised at the improvement which has taken place here.

There was a very interesting revival of religion in the Presbyterian Church in this place last winter under the ministrations of Rev. Mr. Avery-an evangelist from Ohio.

About one hundred and twenty were converted-among whom were some of the most prominent citizens of Ypsilanti.

You will, doubtly, be happy to hear that I too have found the Savior. I have dispassionately considered the claims which God has upon me and have resolved henceforth to serve him. You know you always wished me to be a minister. I may be one yet. I have thought on the subject very seriously and have not yet dismissed it from my mind. I united with the Presbyterian Church in this place but shall probably unite with the Congregational Church in Grand Rapids-I like that one best-they have none here, but I think the Presby-terian Church will become one before many years.

I have an incident to relate before I close. Towards the close of lest month I returned from Detroit to spend a short time at home, and while here I went to Ann Arbor (on Thursday the 19th) to attend the dedication of the Forest Hill Cemetery. I returned home on the evening train the ame day, and before going home, I stopped near the R.R. Depot to talk with Mr. Ninde a moment in regard to some business I had to do in Ann Arbor for the office. while talking a gentleman stepped up to us and asked if either of us knew a Mr. Keith in the place and if so where he lived. Mr. Ninde replied in the affirmative and said that “Mr. Buck was going across the river and could easily show him the place”. While crossing the bridge I asked him if he was just from the cars and on answering in the affirmative, I remarked that I had just come from A.A. in the same train. I soon learned that he was from Niles and asked him if he knew Mr. Hamilton's people. He said yes “and by-the-by” says he when I interrupted him with “they are relatives of mine” he said Mr. H's daughter was on the same train going East and had intended to stop here, but fearful that she would not reach her place of destination before the Sabbath, she concluded not to. His name was Mr. Whitney and he was a delegate to the Cong. Association, which was to meet in Detroit that evening.

I returned to Detroit the next day where I met him and Rev. Mr. Andrews frequently during the session of the Association. Wasn't it strange? Give our regards to our Dousin and a hearty invitation to visit us on her return. Let us know before hand and we will meet her at the train. And won't you come too Cousin Sarah? You know how gladly we'll welcome you. Excuse the appearance of this letter as I write under a “racking” headache of two days duration. All send love. Write soon and believe me, evar, your affectionate cousin.