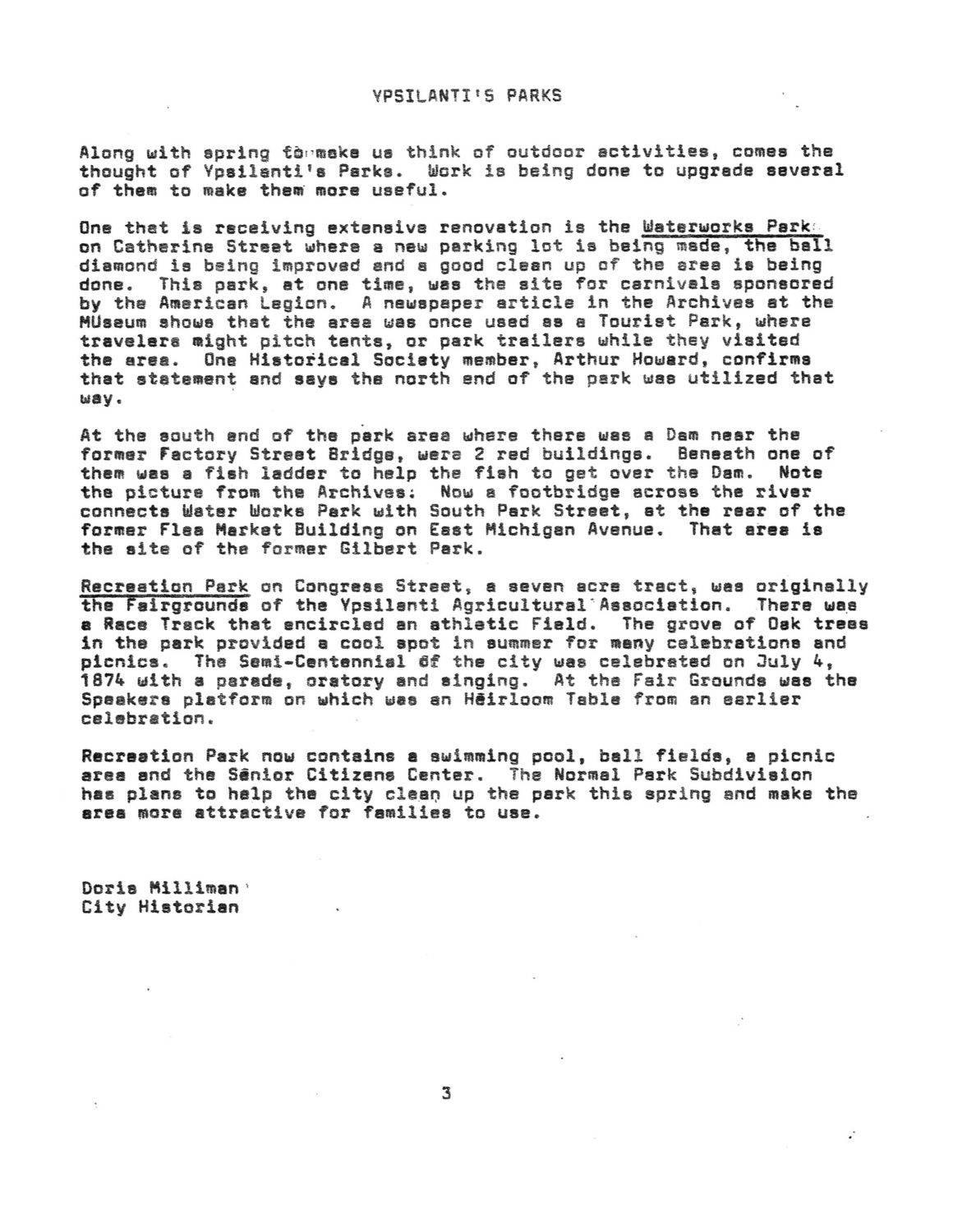 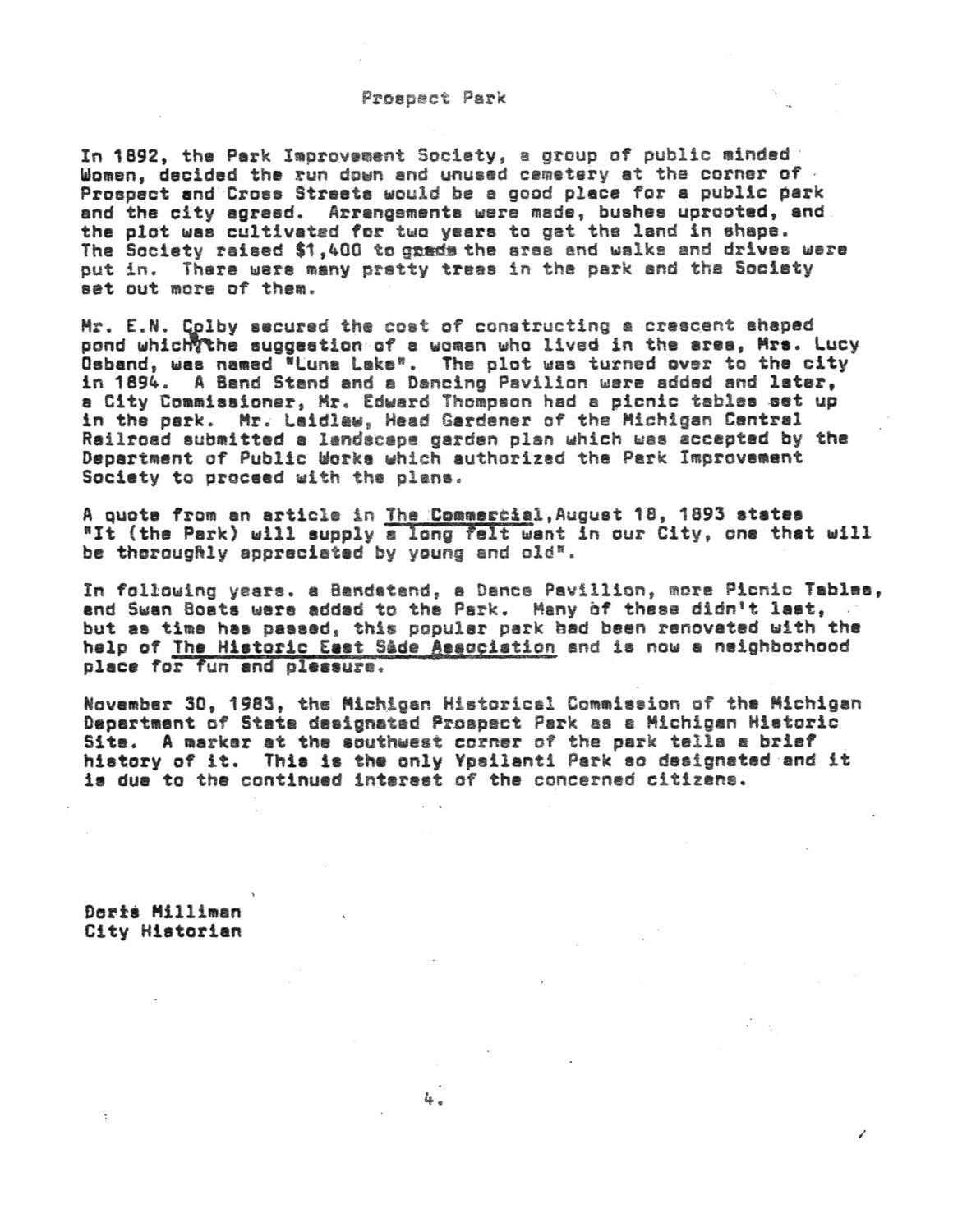 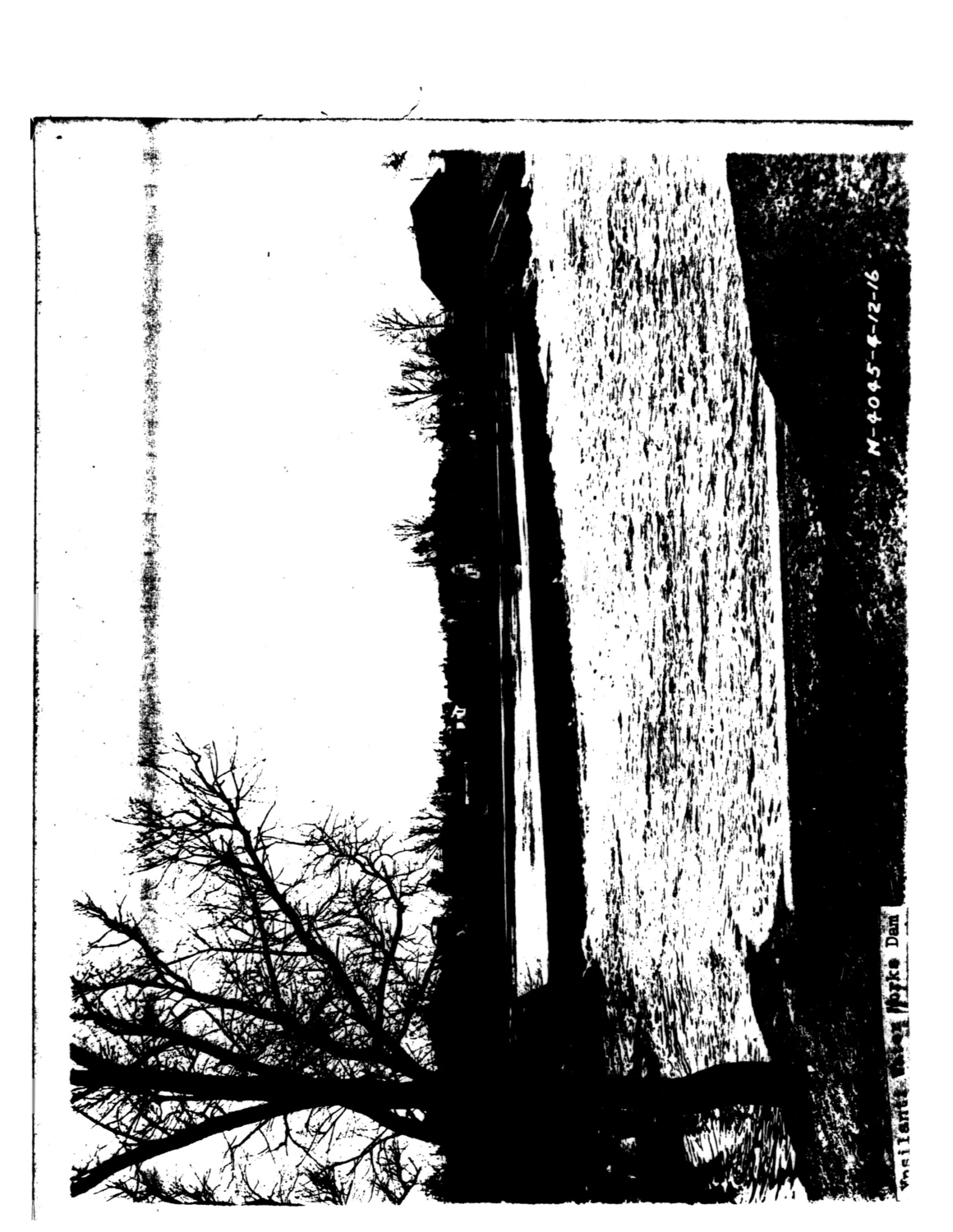 Along with spring to make us think of outdoor activities, comes the though of Ypsilanti's Parks. Work is being done to upgrade several of them to make them more useful.

One that is receiving extensive renovation is the Waterworks Park On Catherine Street where a new parking lot is being made, the ball diamond is being improved and a good clean up of the area is being done. This park, at one time, was the site for carnivals sponsored by the American Legion. A newspaper article in the Archives at the MUseum shows that the area was once used as a Tourist Park, where travelers might pitch tents, or park trailers while they visited the area. One Historical Society member, Arthur Howard, confirms that statement and says the north and of the park was utilized that way.

At the south and of the park area where there was a Dam near the former Factory Street Bridgs, were 2 red buildings. Beneath one of them was a fish ladder to help the fish to get over the Dam. Note the picture from the Archives. Now a footbridge scross the river connects Water Works Park with South Park Street, at the rear of the former Flea Market Building on East Michigan Avenue. That area is the site of the former Gilbert Park.

Recreation Park on Congress Street, a seven acre tract, was originally the Fairgrounds of the Ypsilanti Agricultural Association. There was a Race Track that ancircled an athletic Field. The grove of Oak trees in the park provided a cool spot in summer for meny celebrations and picnics. The Semi-Centennial of the city was celebrated on July 4, 1874 with a parade, oratory and singing. At the Fair Grounds was the Speakers platform on which was an Heirloom Table from an earlier celebration.

Recreation Park now contains a swimming pool, ball fields, a picnic area and the Senior Citizens Center. The Normal Park Subdivision has plans to help the city clean up the park this spring and make the area more attractive for families to use.

In 1892, the Park Improvement Society, a group of public minded Women, decided the run down and unused cemetery at the corner of Prospect and Cross Streets would be a good place for a public park and the city agreed. Arrangements were mads, bushes uprooted, and the plot was cultivated for two years to get the land in shape.
The Society raised &dollar;1,400 to goods the area and walks and drives were put in. There were many pretty trees in the park and the Society set out more of them.

Mr. E. N. Colby secured the cost of constructing a crescent shaped pond which the suggestion of a woman who lived in the area, Mrs. Lucy Osband, was named “Lune Lake”. The plot was turned over to the city in 1894. A Bend Stand and a Dancing Pavilion were added and later, a City Commissioner, Mr. Edward Thompson had a picnic tables set up in the park. Mr. Laidlaw, Head Gardener of the Michigan Central Railroad submitted a landecaps garden plan which was accepted by the Department of Public Works which authorized the Park Improvement Society to procsed with the plans.

A quote from an article in The Commercial, August 18, 1893 states “It (the Park) will supply a long felt want in our City, one that will be thoroughly appraciated by young and old”.

In following years. a Bendetand, a Dance Pavillion, more Picnic Tables, and Swan Boats were added to the Park. Many of these didn't last, but as time has passed, this popular park had been renovated with the help of The Historic East Sade Association and is now a neighborhood place for fun and pleasure.