Mayors of Ypsilanti, Part I 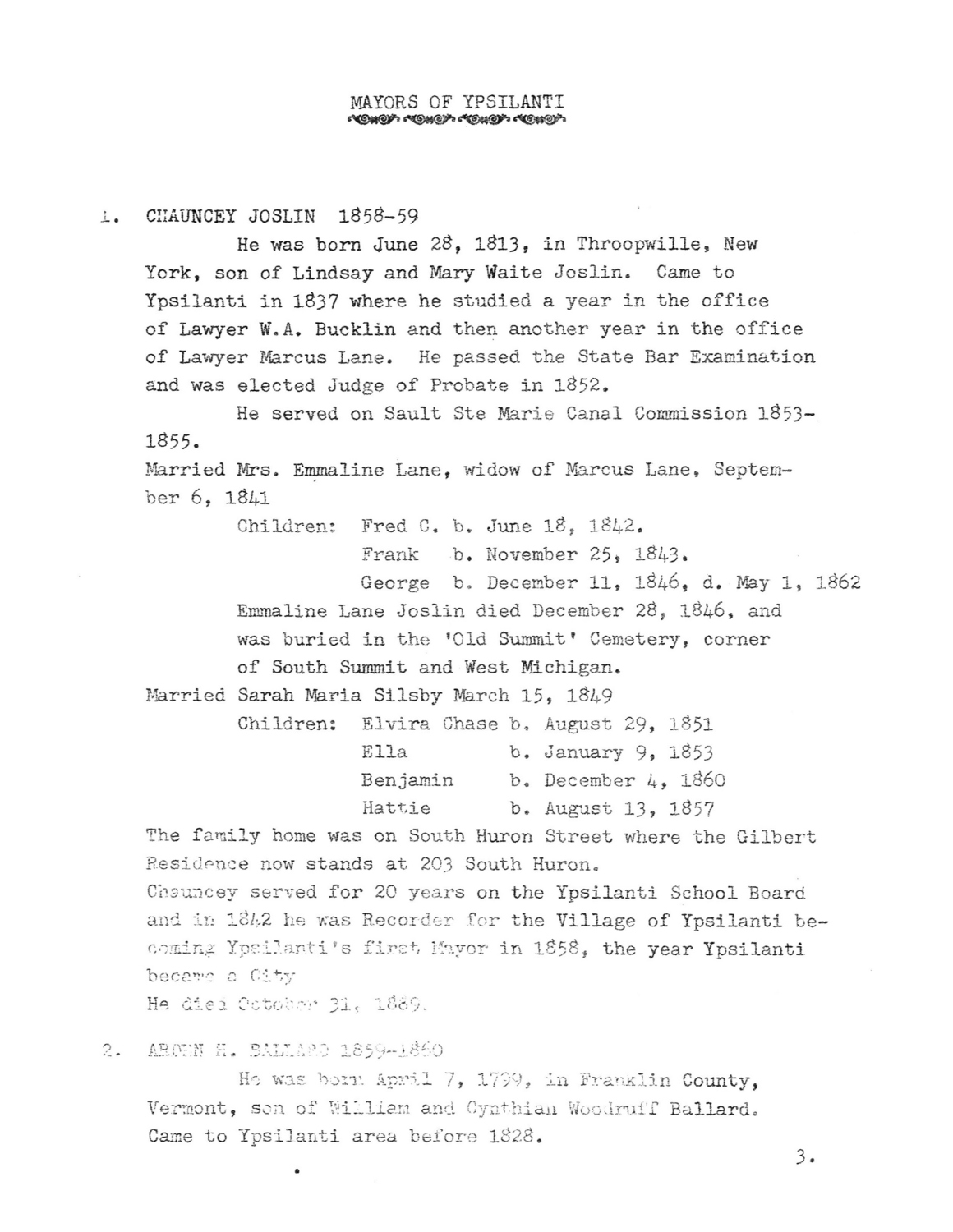 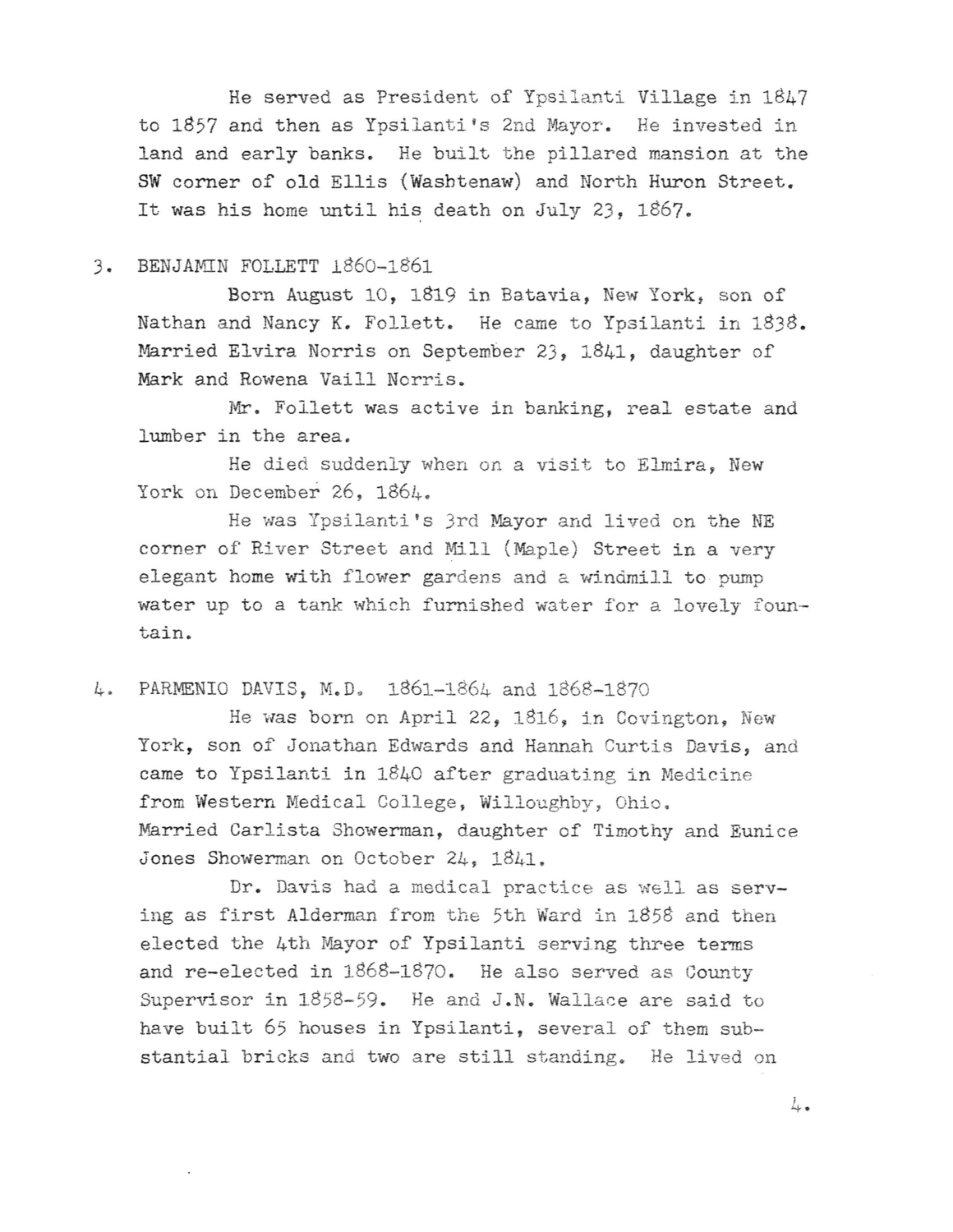 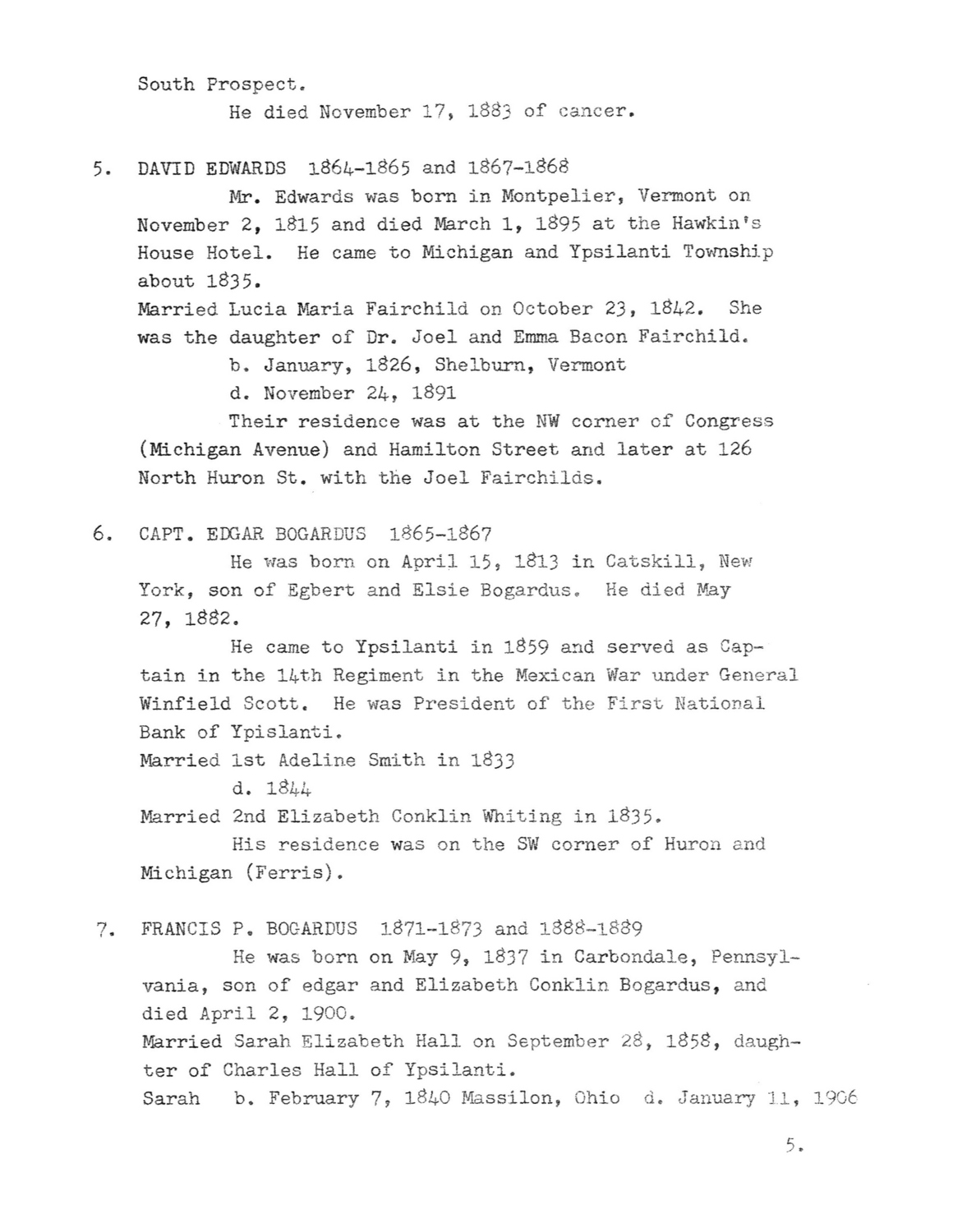 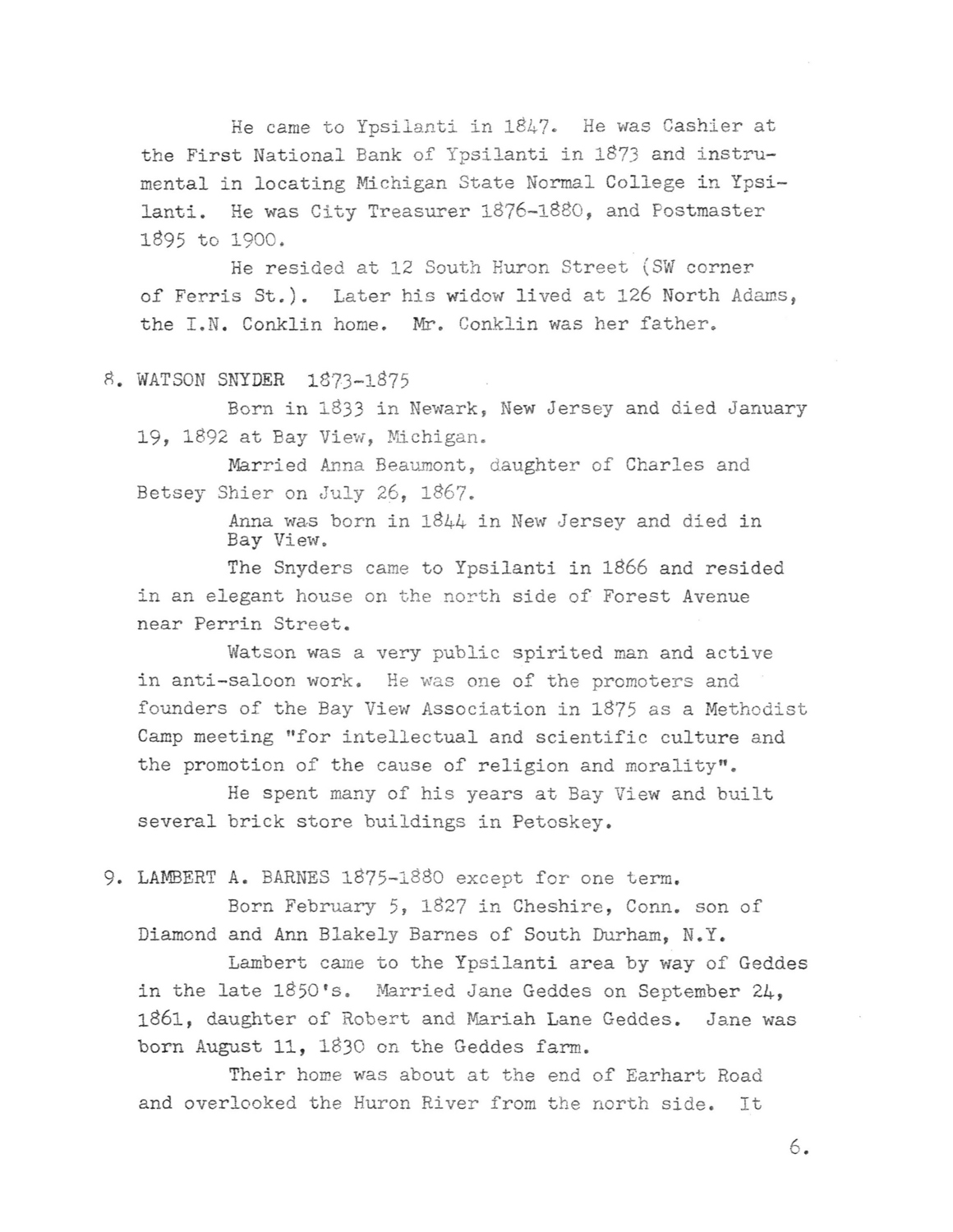 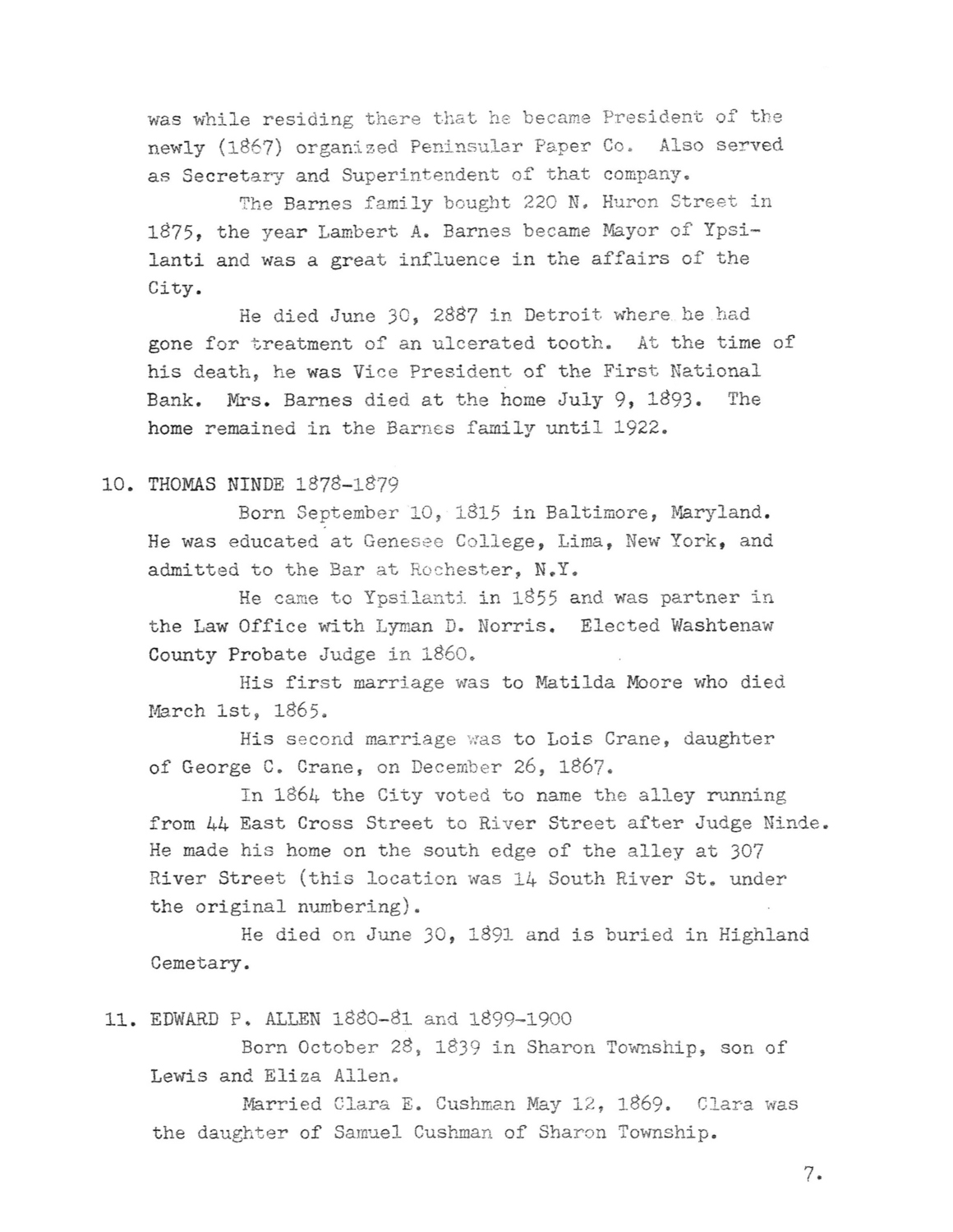 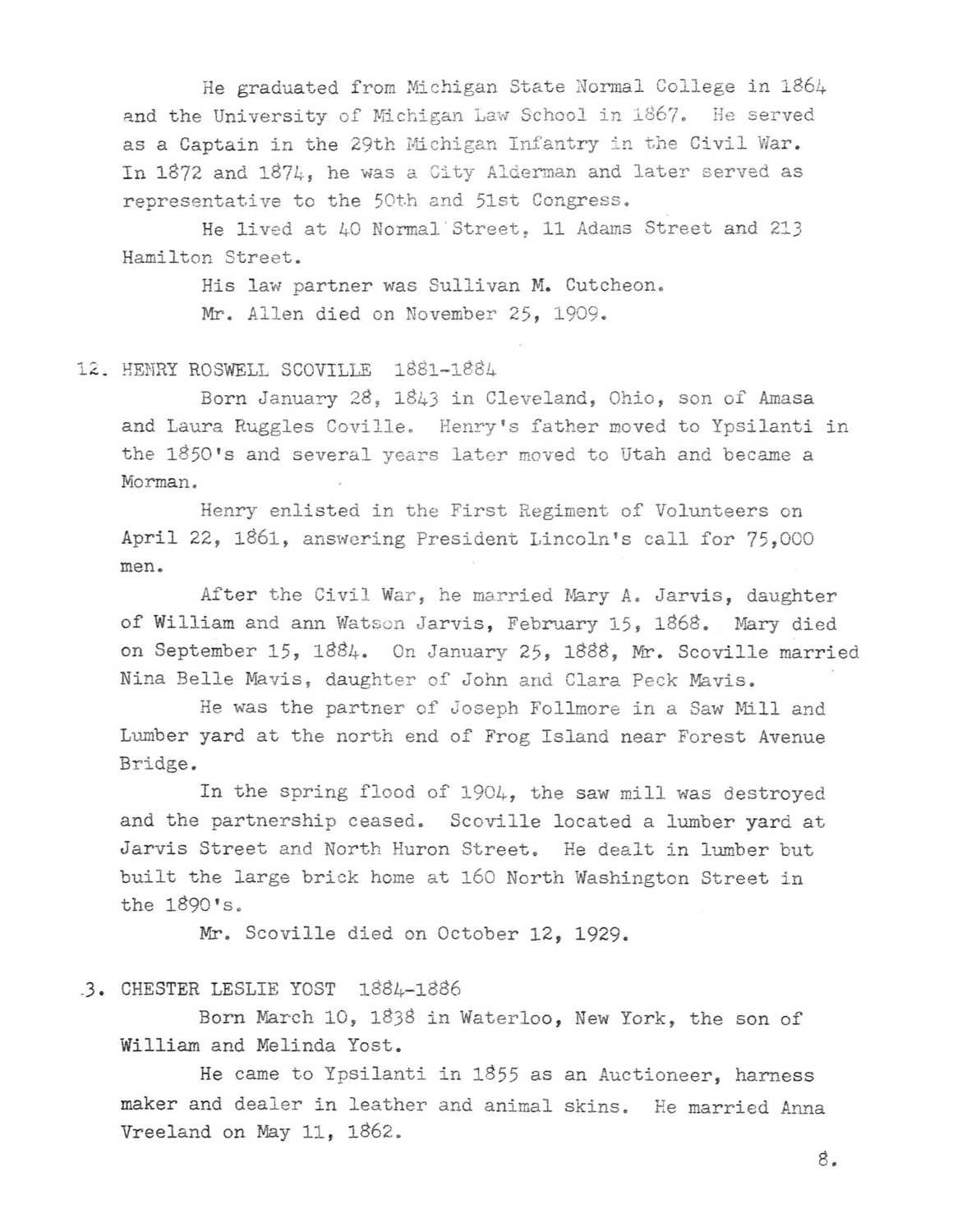 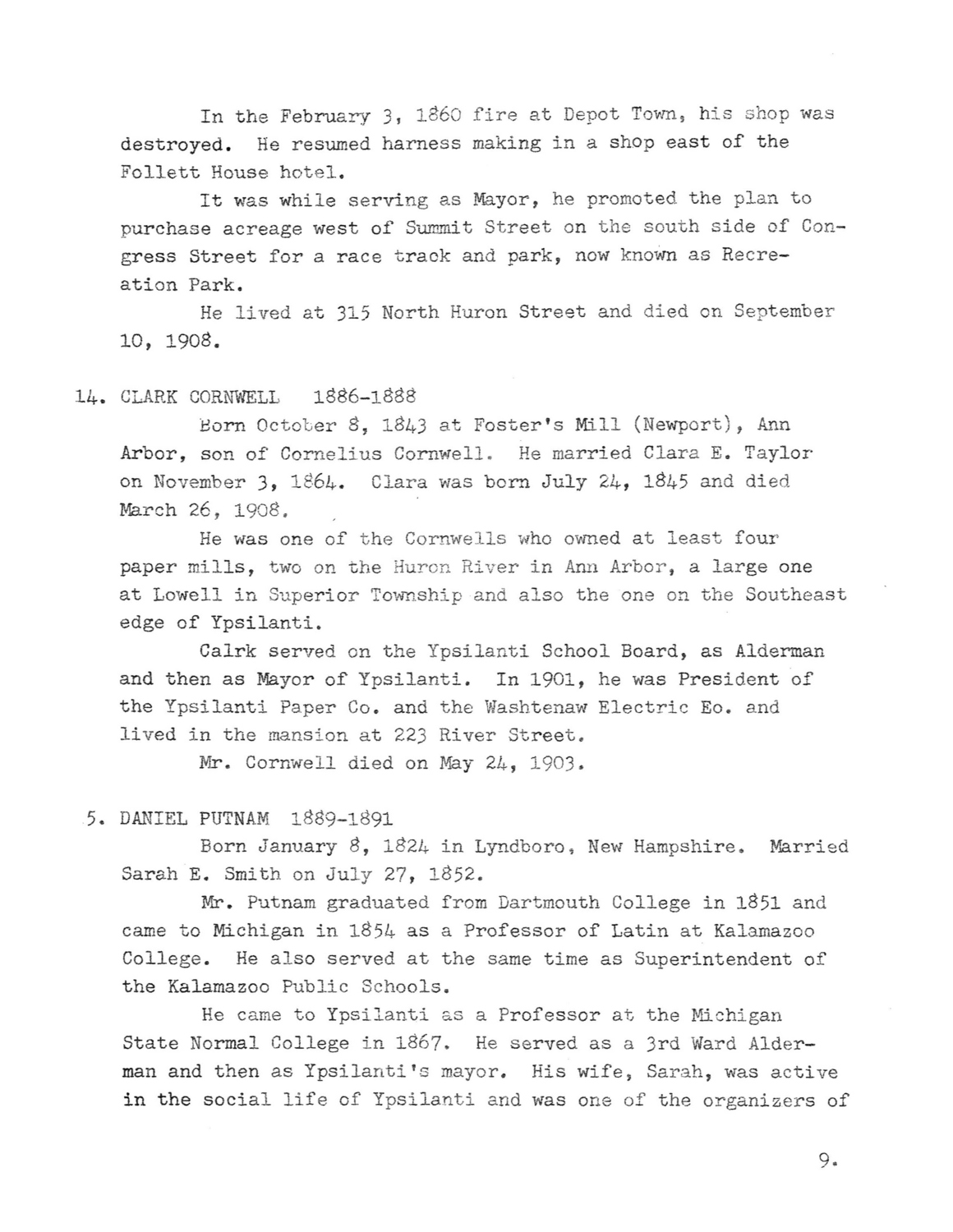 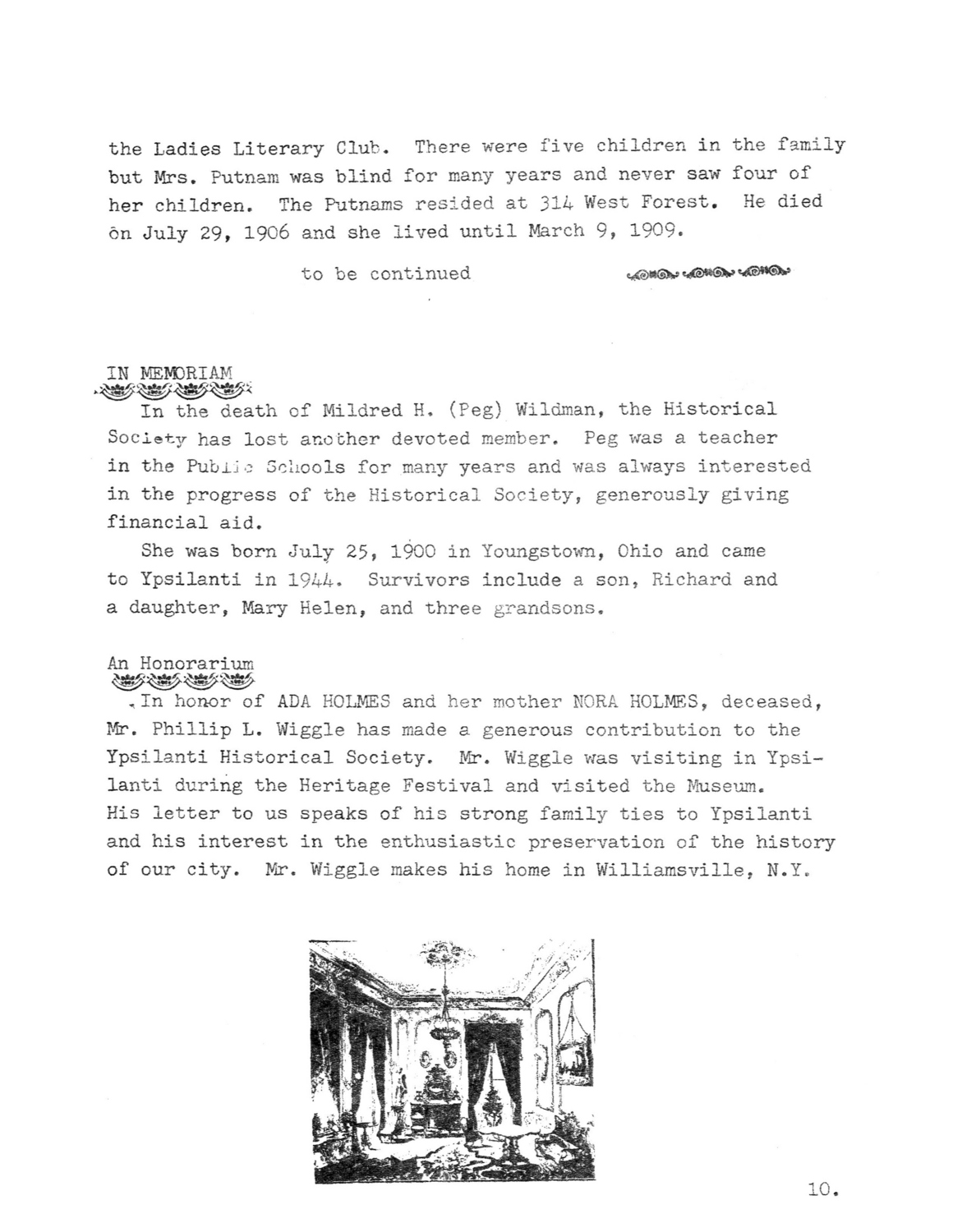 Chsuncey served for 20 years on the Ypsilanti School Board and in: 1842 he was Recorder for the Village of Ypsilanti becaning Ypsilanti's first Mayour in 1858, the year Ypsilanti became a City

He was born April 7, 1799, in Franklin County, Vermont, son of William and Cynthian Woodm Ballard, Came to Ypsilanti area before 1828.

He served as President of Ypsilanti Village in 1847 to 1857 and then as Ypsilanti's 2nd Mayor. He invested in land and early banks. He built the pillared mansion at the SW corner of old Ellis (Washtenaw) and North Huron Street. It was his home until his death on July 23, 1867.

Mr. Follett was active in banking, real estate and lumber in the area.

He was Ypsilanti's 3rd Mayor and lived on the NE corner of River Street and Mill (Maple) Street in a very elegant home with flower gardens and a windmill to pump water up to a tank which furnished water for a lovely fountain.

He was born on April 22, 1816, in Covington, New York, son of Jonathan Edwards and Hannah Curtis Davis, and came to Ypsilanti in 1840 after graduating in Medicine from Western Medical College, Willoughby, Ohio. Married Carlista Showerman, daughter of Timothy and Eunice Jones Showerman on October 24, 1841.

Dr. Davis had a medical practice as well as serving as first Alderman from the 5th Ward in 1853 and then elected the 4th Mayor of Ypsilanti serving three terms and re-elected in 1868-1870. He also served as County Supervisor in 1858-59. He and J.N. Wallace are said to have built 65 houses in Ypsilanti, several of them substantial bricks and two are still standing. He lived on South Prospect.

Mr. Edwards was born in Montpelier, Vermont on November 2, 1815 and died March 1, 1895 at the Hawkin's House Hotel. He came to Michigan and Ypsilanti Township about 1835.

Married Lucia Maria Fairchild on October 23, 1842. She was the daughter of Dr. Joel and Emma Bacon Fairchild.

Their residence was at the NW corner of Congress (Michigan Avenue) and Hamilton Street and later at 126 North Huron St. with the Joel Fairchilds.

He came to Ypsilanti in 1859 and served as Captain in the 14th Regiment in the Mexican War under General Winfield Scott. He was President of the First National Bank of Ypislanti.

His residence was on the SW corner of Huron and Michigan (Ferris).

He was born on May 9, 1837 in Carbondale, Pennsylvania, son of edgar and Elizabeth Conklin Bogardus, and died April 2, 1900.

He came to Ypsilanti in 1847. He was Cashier at the First National Bank of Ypsilanti in 1873 and instrumental in locating Michigan State Normal College in Ypsilanti. He was City Treasurer 1876-1880, and Postmaster 1895 to 1900.

Anna was born in 1844 in New Jersey and died in Bay View.

The Snyders came to Ypsilanti in 1866 and resided in an elegant house on the north side of Forest Avenue near Perrin Street.

Watson was a very public spirited man and active in anti-saloon work. He was one of the promoters and founders of the Bay View Association in 1875 as a Methodist Camp meeting “for intellectual and scientific culture and the promotion of the cause of religion and morality”.

He spent many of his years at Bay View and built several brick store buildings in Petoskey.

Lambert came to the Ypsilanti area by way of Geddes in the late 1850's. Married Jane Geddes on September 24, 1861, daughter of Robert and Mariah Lane Geddes. Jane was born August 11, 1830 on the Geddes farm.

Their home was about at the end of Earhart Road and overlooked the Huron River from the north side. It was while residing there that he became President of the newly (1867) organised Peninsular Paper Co, Also served as Secretary and Superintendent of that company.

The Barnes family bought 220 N. Huron Street in 1875, the year Lambert A. Barnes became Mayor of Ypsilanti and was a great influence in the affairs of the City.

He died June 30, 2887 in Detroit where he had gone for treatment of an ulcerated tooth. At the time of his death, he was Vice President of the First National Bank. Mrs. Barnes died at the home July 9, 1893. The home remained in the Barnes family until 1922.

Born September 10, 1815 in Baltimore, Maryland. He was educated at Genesee College, Lima, New York, and admitted to the Bar at Rochester, N.Y.

He came to Ypsilanti in 1855 and was partner in the Law Office with Lyman D. Norris. Elected Washtenaw County Probate Judge in 1860.

His first marriage was to Matilda Moore who died March 1st, 1865.

His second marriage was to Lois Crane, daughter of George C. Crane, on December 26, 1867.

In 1864 the City voted to name the alley running from 44 East Cross Street to River Street after Judge Ninde. He made his home on the south edge of the alley at 307 River Street (this location was 14 South River St. under the original numbering).

Married Clara E. Cushman May 12, 1869. Clara was the daughter of Samuel Cushman of Sharon Township.

He graduated from Michigan State Normal College in 1864 and the University of Michigan Law School in 1867. He served as a Captain in the 29th Michigan Infantry in the Civil War. In 1872 and 1874, he was a City Alderman and later served as representative to the 50th and 51st Congress.

He lived at 40 Normal Street, 11 Adams Street and 213 Hamilton Street.

Born January 28, 1843 in Cleveland, Ohio, son of Amasa and Laura Ruggles Coville. Henry's father moved to Ypsilanti in the 1850's and several years later moved to Utah and became a Morman.

Henry enlisted in the First Regiment of Volunteers on April 22, 1861, answering President Lincoln's call for 75,000 men.

He was the partner of Joseph Follmore in a Saw Mill and Lumber yard at the north end of Frog Island near Forest Avenue Bridge.

In the spring flood of 1904, the saw mill was destroyed and the partnership ceased. Scoville located a lumber yard at Jarvis Street and North Huron Street. He dealt in lumber but built the large brick home at 160 North Washington Street in the 1890's.

He came to Ypsilanti in 1855 as an Auctioneer, harness maker and dealer in leather and animal skins. He married Anna Vreeland on May 11, 1862.

In the February 3, 1860 fire at Depot Town, his shop was destroyed. He resumed harness making in a shop east of the Follett House hotel.

It was while serving as Mayor, he promoted the plan to purchase acreage west of Summit Street on the south side of Congress Street for a race track and park, now known as Recreation Park.

He was one of the Cornwells who owned at least four paper mills, two on the Huron River in Ann Arbor, a large one at Lowell in Superior Township and also the one on the Southeast edge of Ypsilanti.

Calrk served on the Ypsilanti School Board, as Alderman and then as Mayor of Ypsilanti. In 1901, he was President of the Ypsilanti Paper Co. and the Washtenaw Electric Eo. and lived in the mansion at 223 River Street.

Mr. Putnam graduated from Dartmouth College in 1851 and came to Michigan in 1854 as a Professor of Latin at Kalamazoo College. He also served at the same time as Superintendent of the Kalamazoo Public Schools.

He came to Ypsilanti as a Professor at the Michigan State Normal College in 1867. He served as a 3rd Ward Alderman and then as Ypsilanti's mayor. His wife, Sarah, was active in the social life of Ypsilanti and was one of the organizers of the Ladies Literary Club. There were five children in the family but Mrs. Putnam was blind for many years and never saw four of her children. The Putnams resided at 314 West Forest. He died on July 29, 1906 and she lived until March 9, 1909.