What a Reunion Means 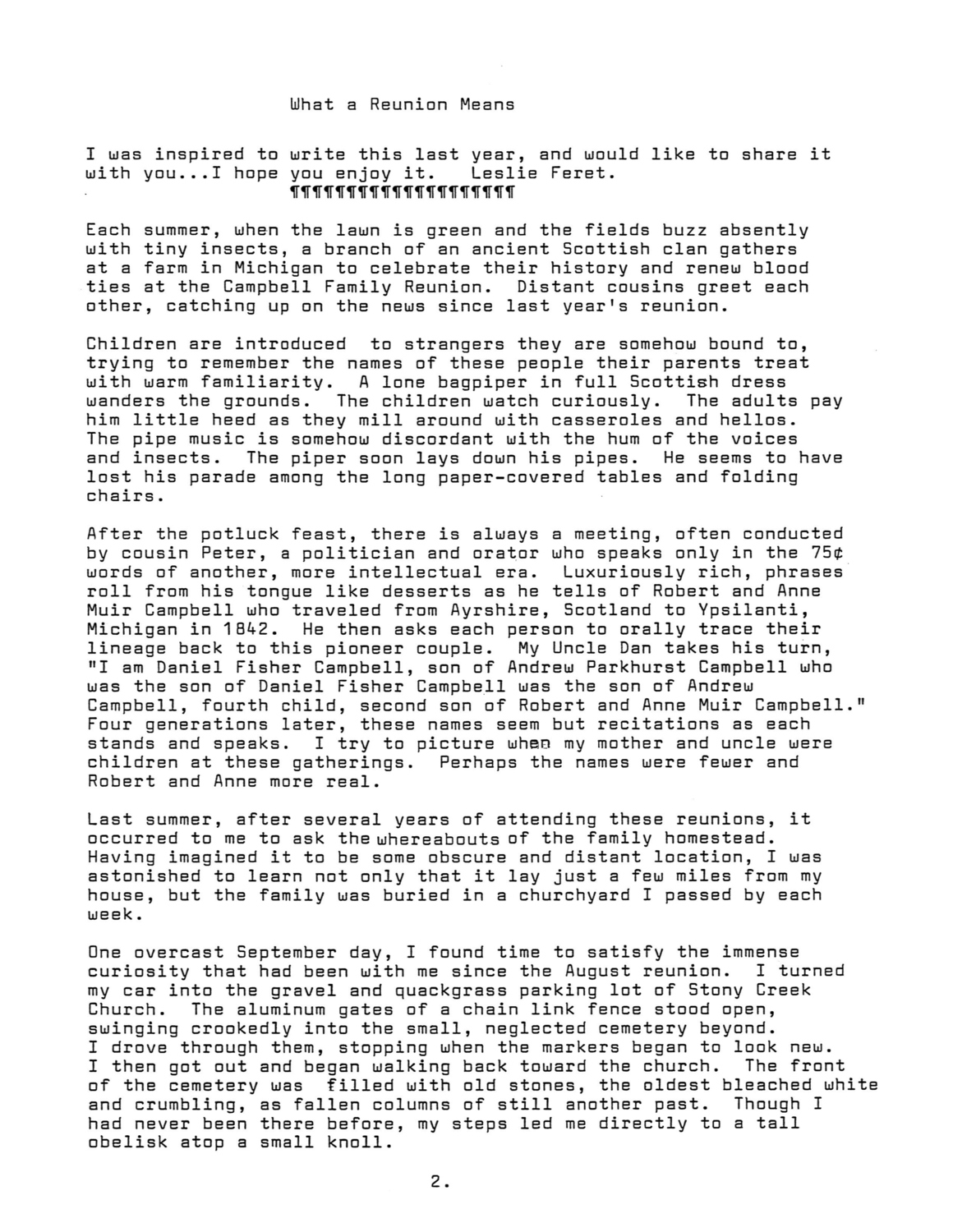 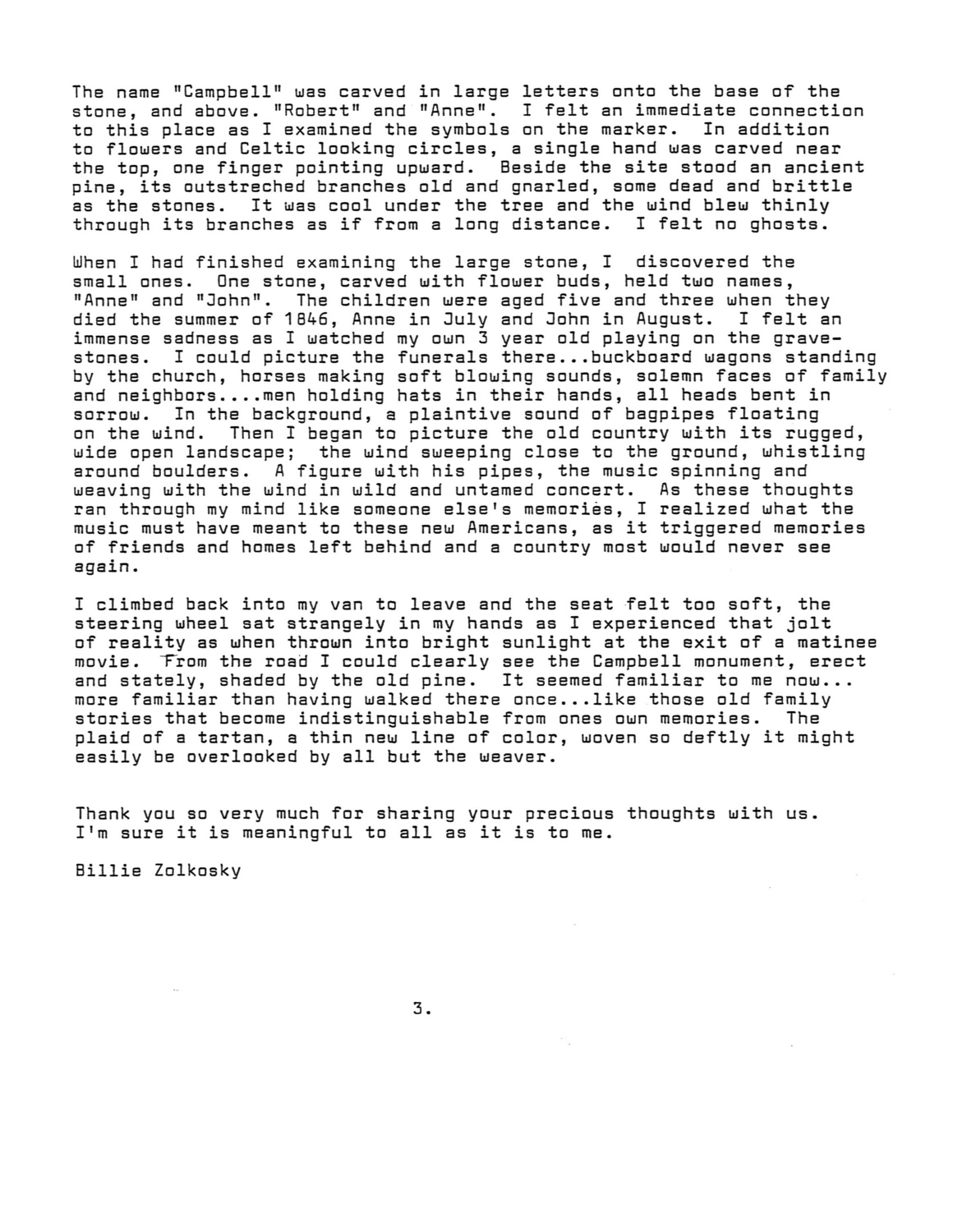 I was inspired to write this last year, and would like to share it with you…I hope you enjoy it. ~Leslie Feret.

Each summer, when the lawn is green and the fields buzz absently with tiny insects, a branch of an ancient Scottish clan gathers at a farm in Michigan to celebrate their history and renew blood ties at the Campbell Family Reunion. Distant cousins greet each other, catching up on the news since last year's reunion.

Children are introduced to strangers they are somehow bound to, trying to remember the names of these people their parents treat with warm familiarity. A lone bagpiper in full Scottish dress wanders the grounds. The children watch curiously. The adults pay him little heed as they mill around with casseroles and hellos. The pipe music is somehow discordant with the hum of the voices and insects. The piper soon lays down his pipes. He seems to have lost his parade among the long paper-covered tables and folding chairs.

After the potluck feast, there is always a meeting, often conducted by cousin Peter, a politician and orator who speaks only in the 75¢ words of another, more intellectual era. Luxuriously rich, phrases roll from his tongue like desserts as he tells of Robert and Anne Muir Campbell who traveled from Ayrshire, Scotland to Ypsilanti, Michigan in 1842. He then asks each person to orally trace their lineage back to this pioneer couple. My Uncle Dan takes his turn, “I am Daniel Fisher Campbell, son of Andrew Parkhurst Campbell who was the son of Daniel Fisher Campbell was the son of Andrew Campbell, fourth child, second son of Robert and Anne Muir Campbell.” Four generations later, these names seem but recitations as each stands and speaks. I try to picture when my mother and uncle were children at these gatherings. Perhaps the names were fewer and Robert and Anne more real.

Last summer, after several years of attending these reunions, it occurred to me to ask the whereabouts of the family homestead. Having imagined it to be some obscure and distant location, I was astonished to learn not only that it lay just a few miles from my house, but the family was buried in a churchyard I passed by each week.

One overcast September day, I found time to satisfy the immense curiosity that had been with me since the August reunion. I turned my car into the gravel and quackgrass parking lot of Stony Creek Church. The aluminum gates of a chain link fence stood open, swinging crookedly into the small, neglected cemetery beyond. I drove through them, stopping when the markers began to look new. I then got out and began walking back toward the church. The front of the cemetery was filled with old stones, the oldest bleached white and crumbling, as fallen columns of still another past. Though I had never been there before, my steps led me directly to a tall obelisk atop a small knoll.

The name “Campbell” was carved in large letters onto the base of the stone, and above. “Robert” and “Anne”. I felt an immediate connection to this place as I examined the symbols on the marker. In addition to flowers and Celtic looking circles, a single hand was carved near the top, one finger pointing upward. Beside the site stood an ancient pine, its outstreched branches old and gnarled, some dead and brittle as the stones. It was cool under the tree and the wind blew thinly through its branches as if from a long distance. I felt no ghosts.

When I had finished examining the large stone, I discovered the small ones. One stone, carved with flower buds, held two names, “Anne” and “John”. The children were aged five and three when they died the summer of 1846, Anne in July and John in August. I felt an immense sadness as I watched my own 3 year old playing on the grave-stones. I could picture the funerals there…buckboard wagons standing by the church, horses making soft blowing sounds, solemn faces of family and neighbors….men holding hats in their hands, all heads bent in sorrow. In the background, a plaintive sound of bagpipes floating on the wind. Then I began to picture the old country with its rugged, wide open landscape; the wind sweeping close to the ground, whistling around boulders. A figure with his pipes, the music spinning and weaving with the wind in wild and untamed concert. As these thoughts ran through my mind like someone else's memories, I realized what the music must have meant to these new Americans, as it triggered memories of friends and homes left behind and a country most would never see again.

I climbed back into my van to leave and the seat felt too soft, the steering wheel sat strangely in my hands as I experienced that jolt of reality as when thrown into bright sunlight at the exit of a matinee movie. From the road I could clearly see the Campbell monument, erect and stately, shaded by the old pine. It seemed familiar to me now… more familiar than having walked there once…like those old family stories that become indistinguishable from ones own memories. The plaid of a tartan, a thin new line of color, woven so deftly it might easily be overlooked by all but the weaver.

(Thank you so very much for sharing your precious thoughts with us. I'm sure it is meaningful to all as it is to me. ~Billie Zolkosky)