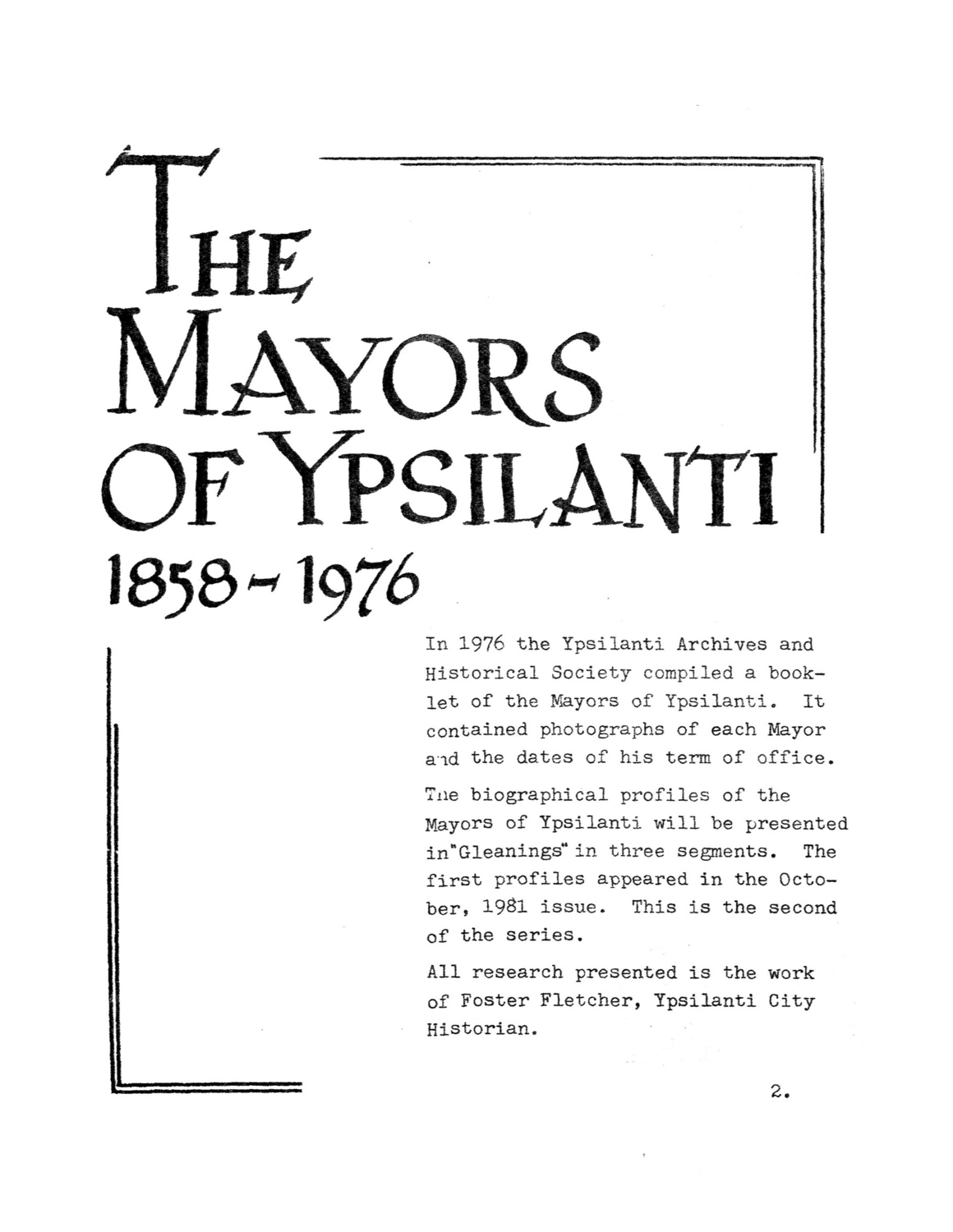 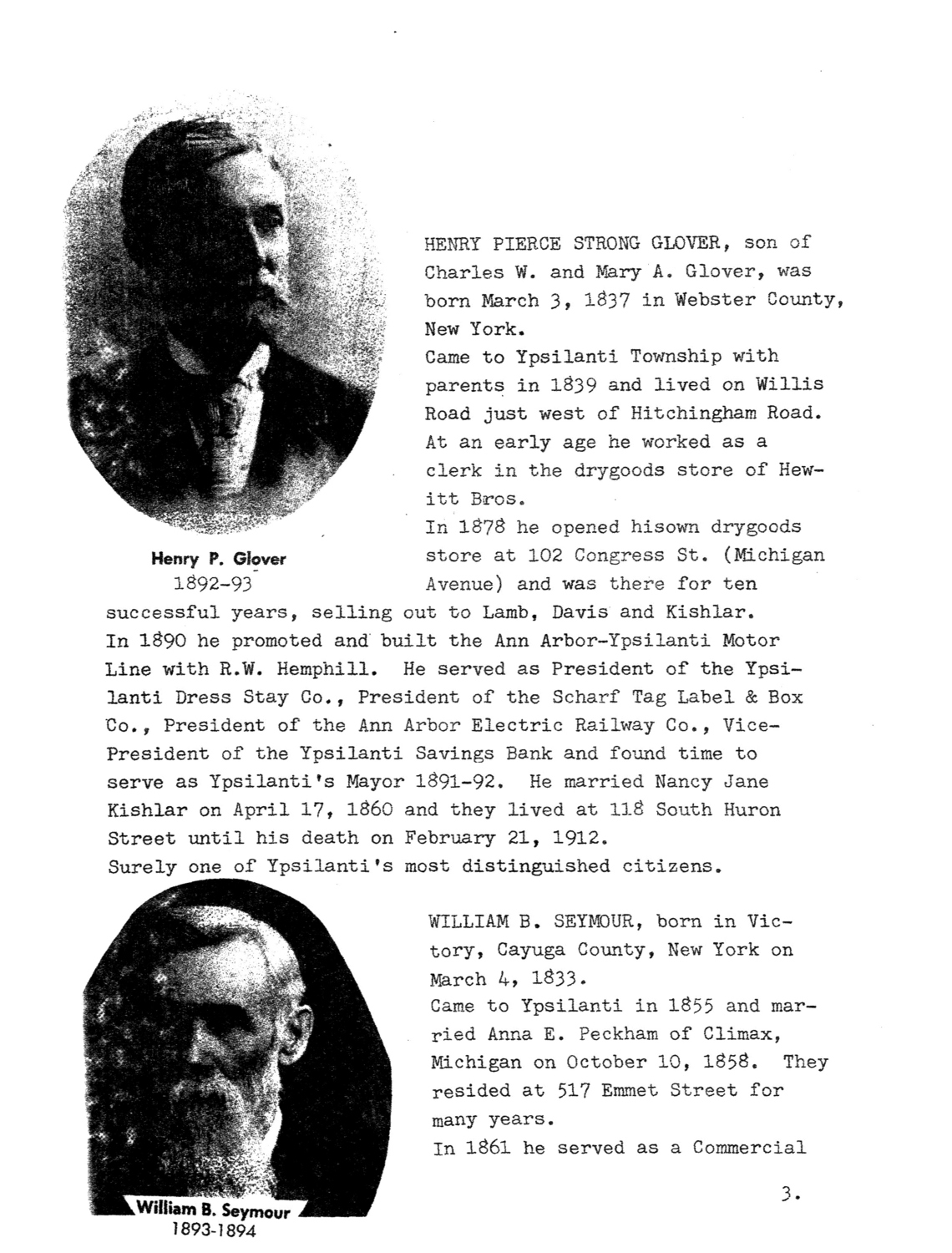 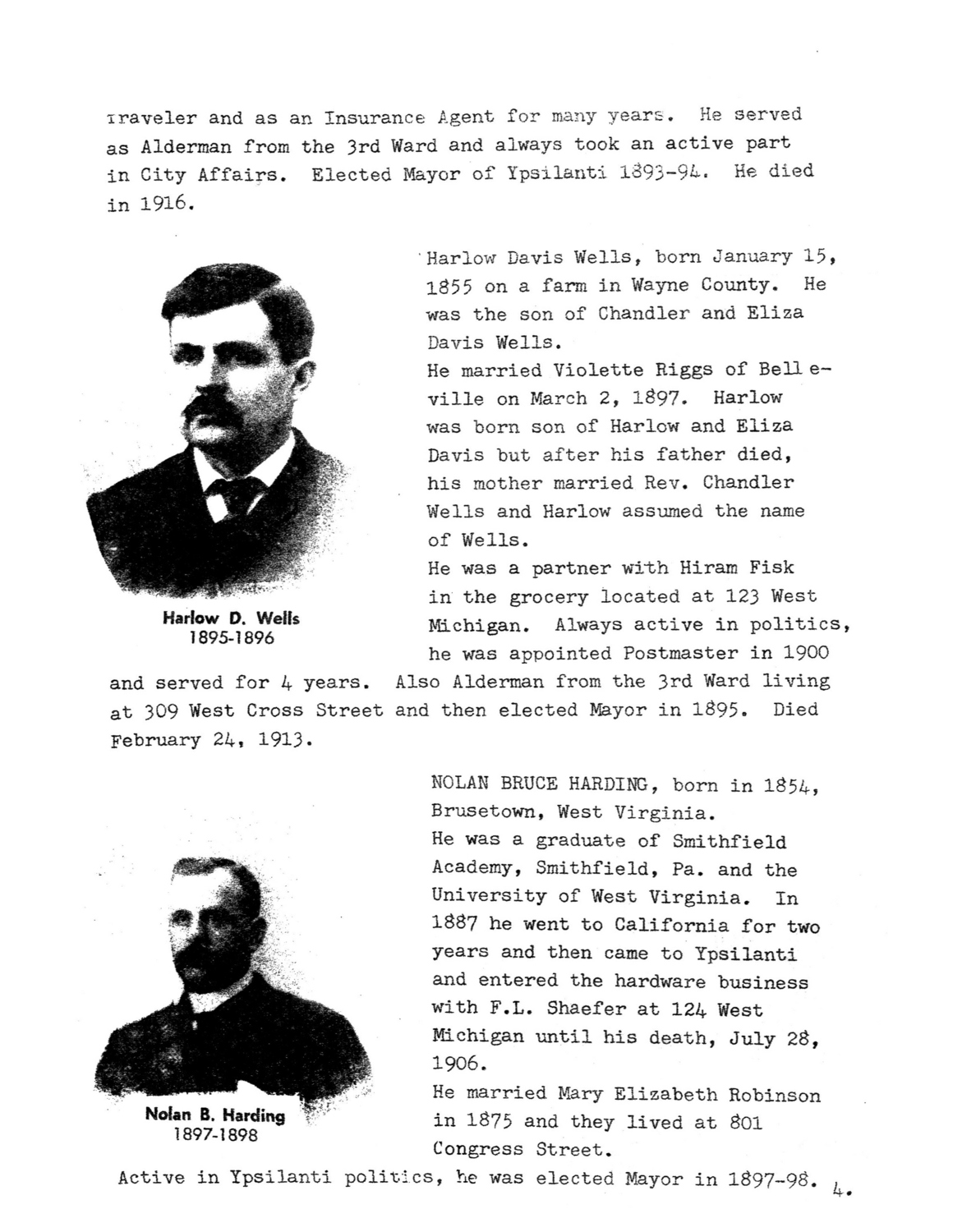 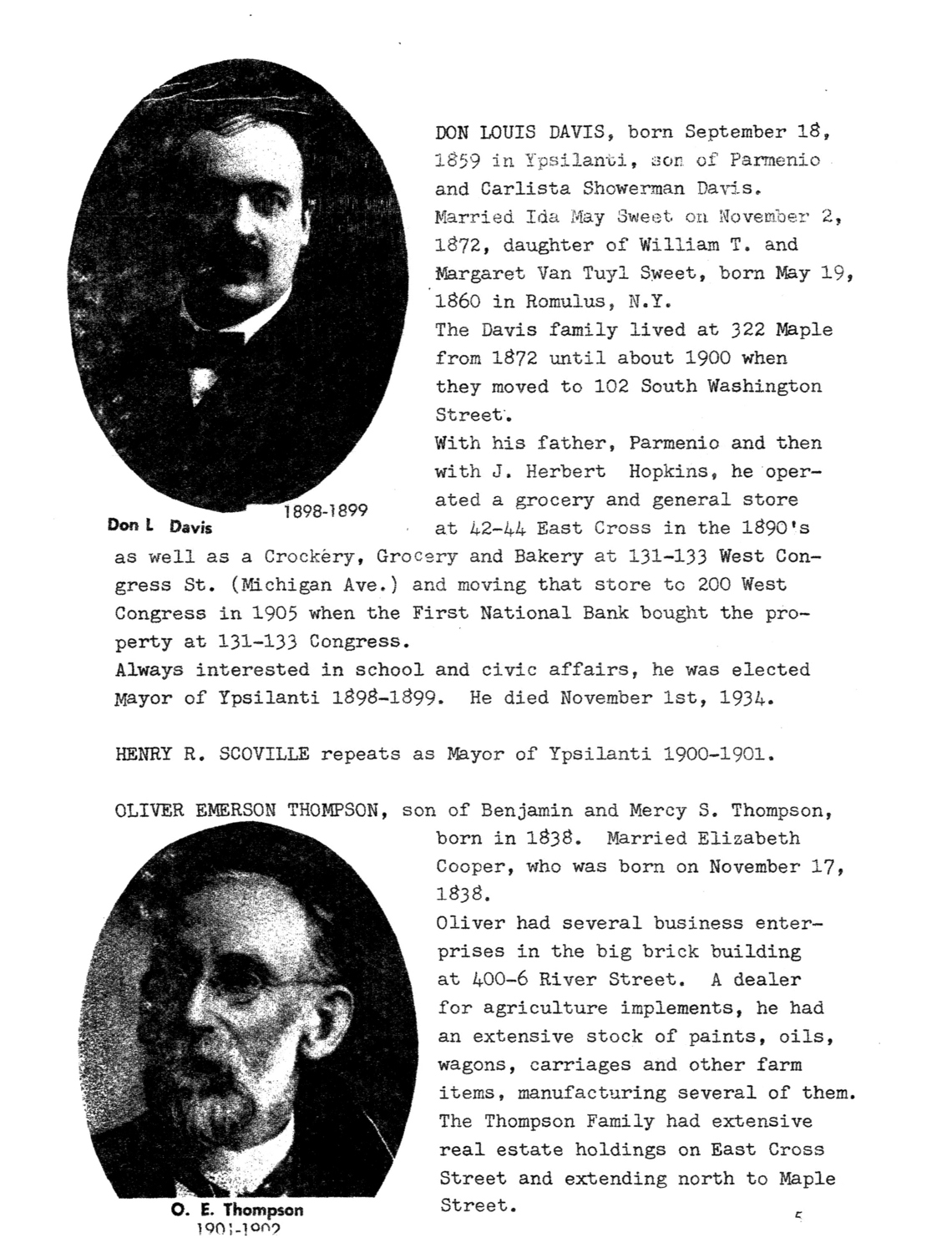 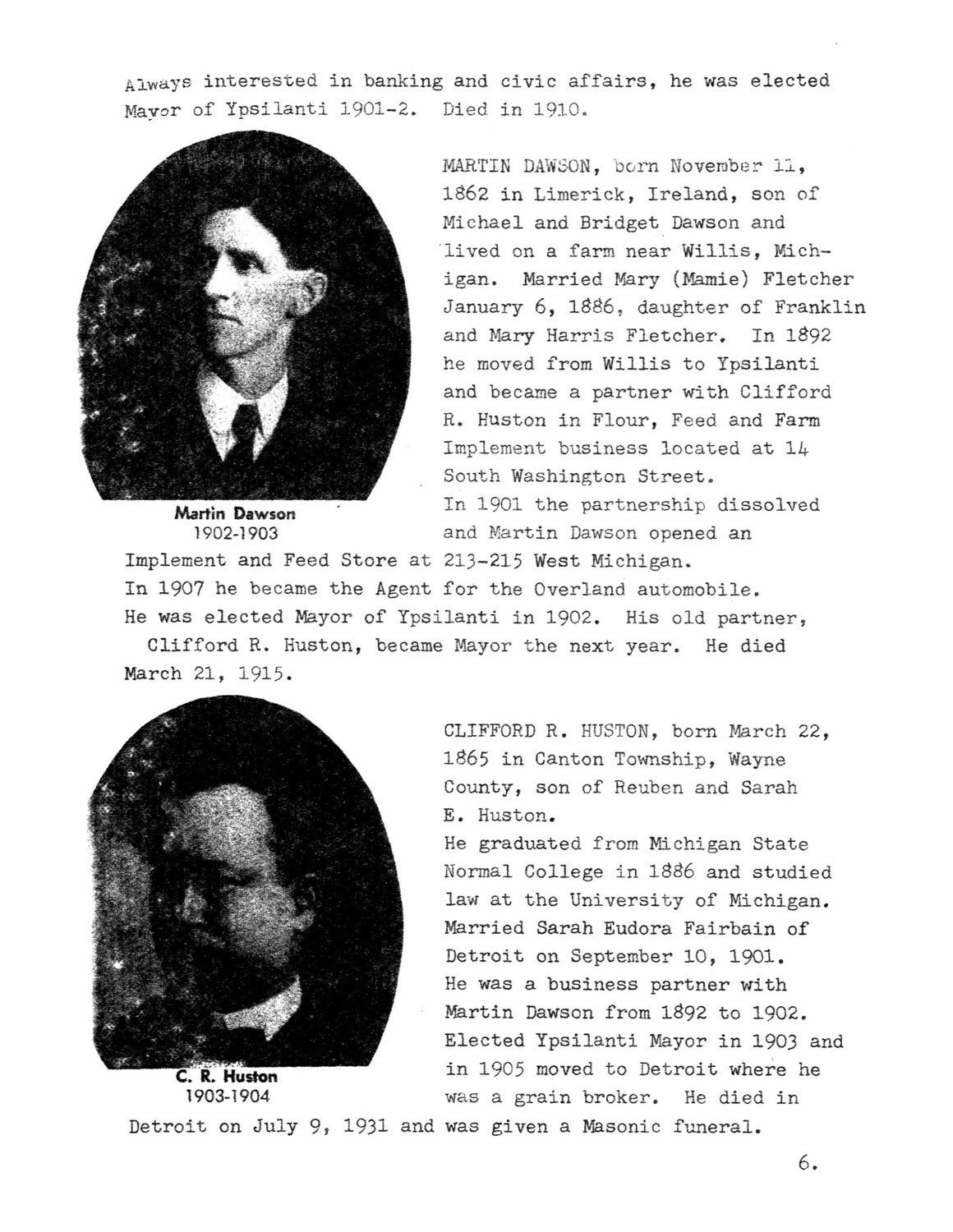 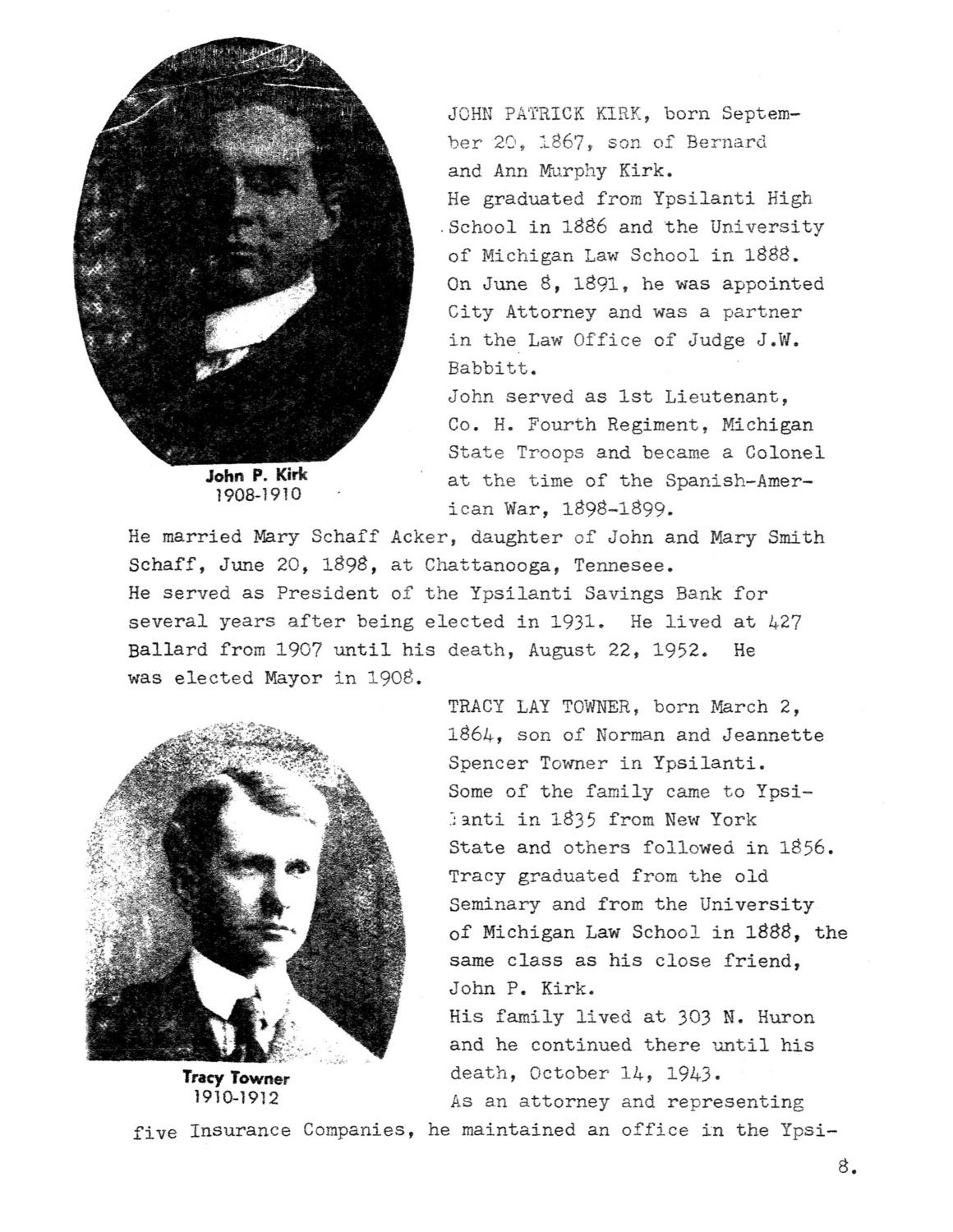 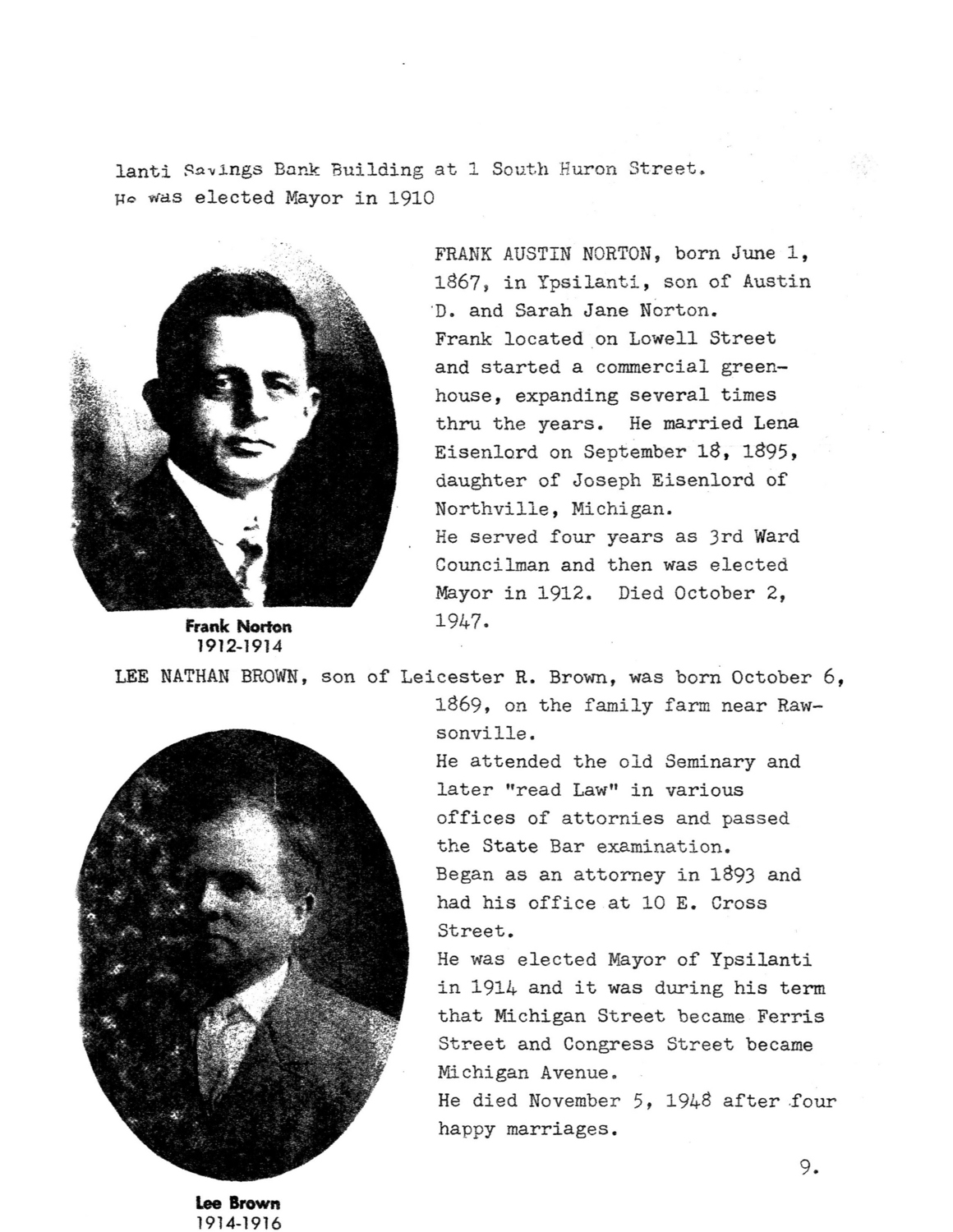 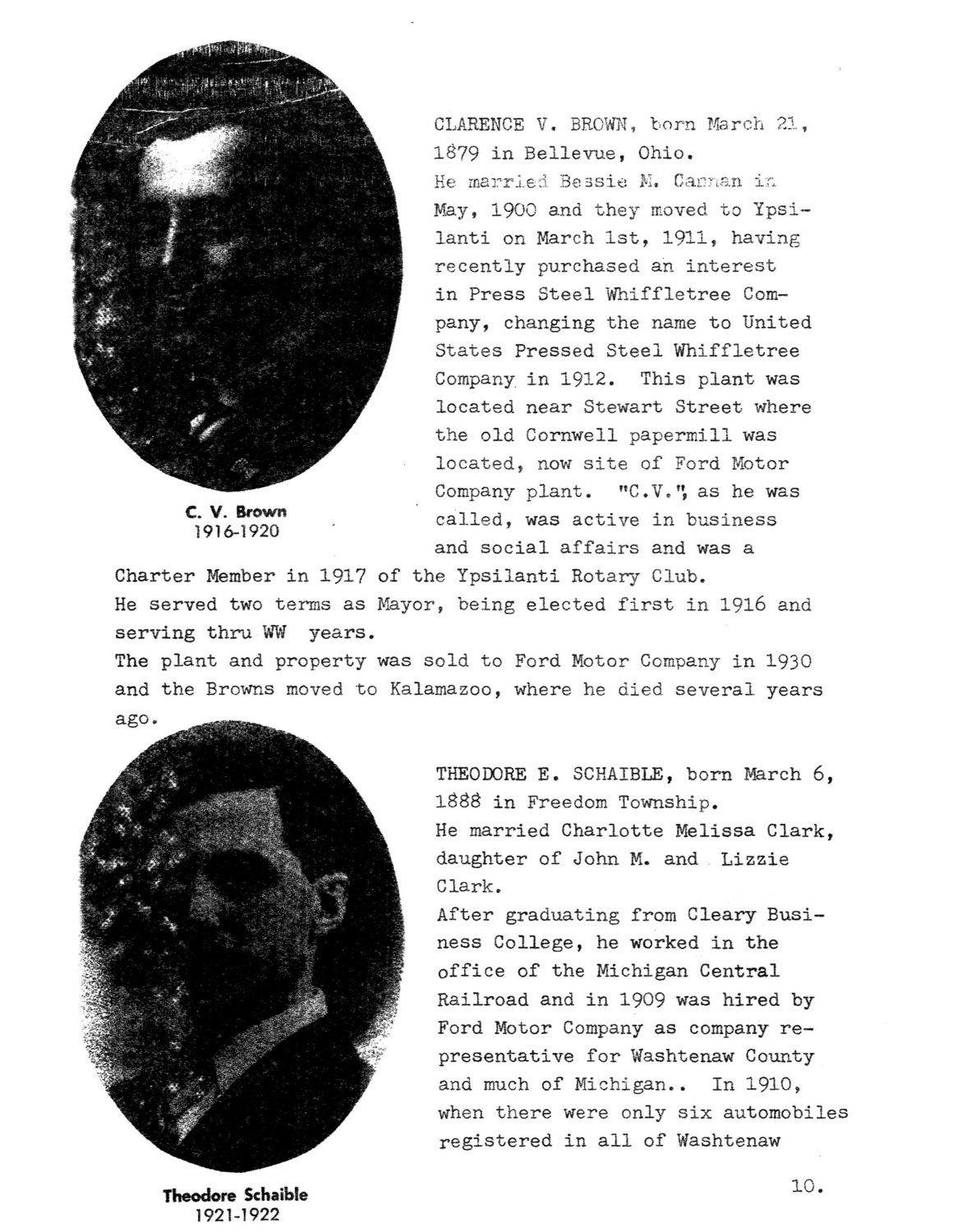 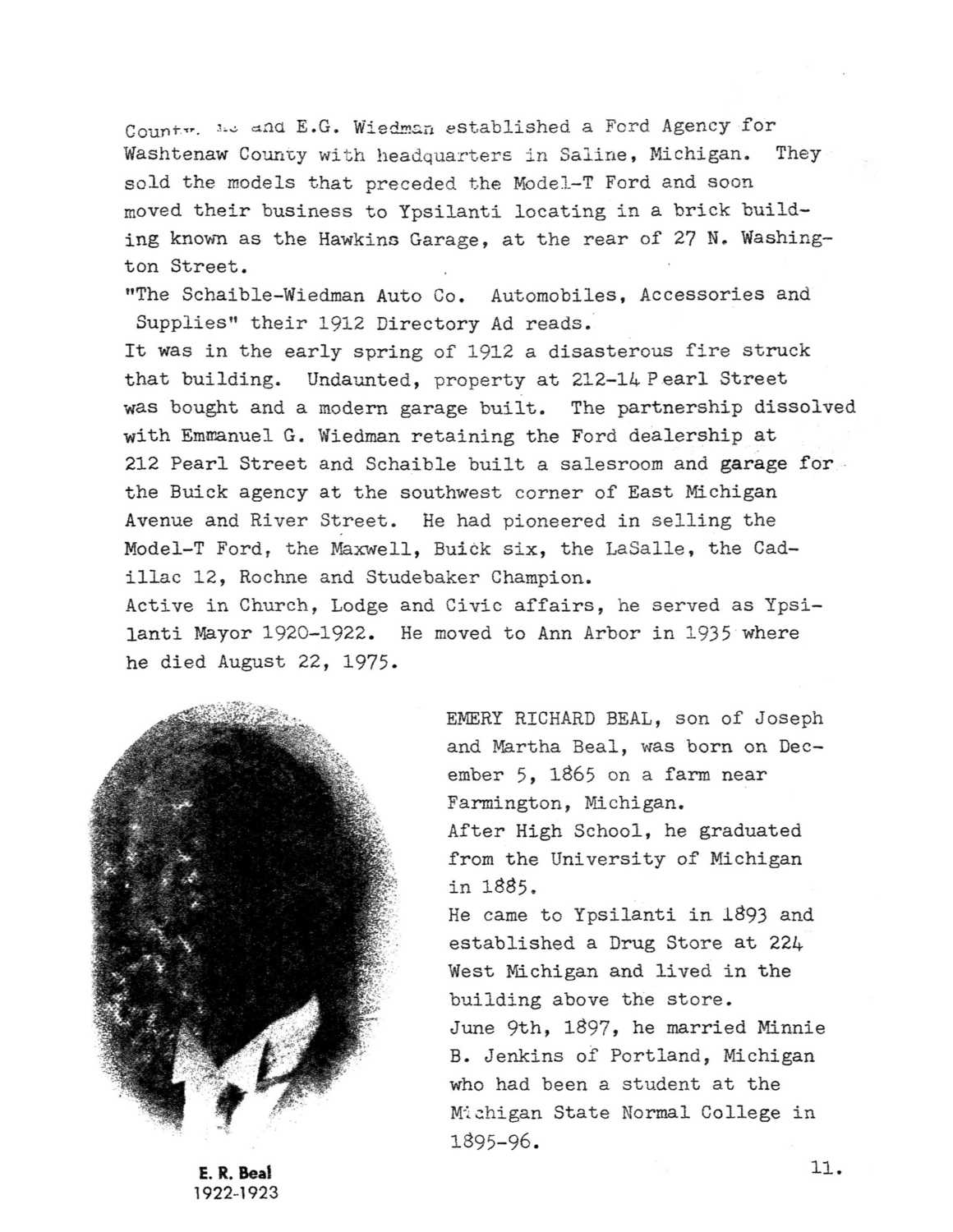 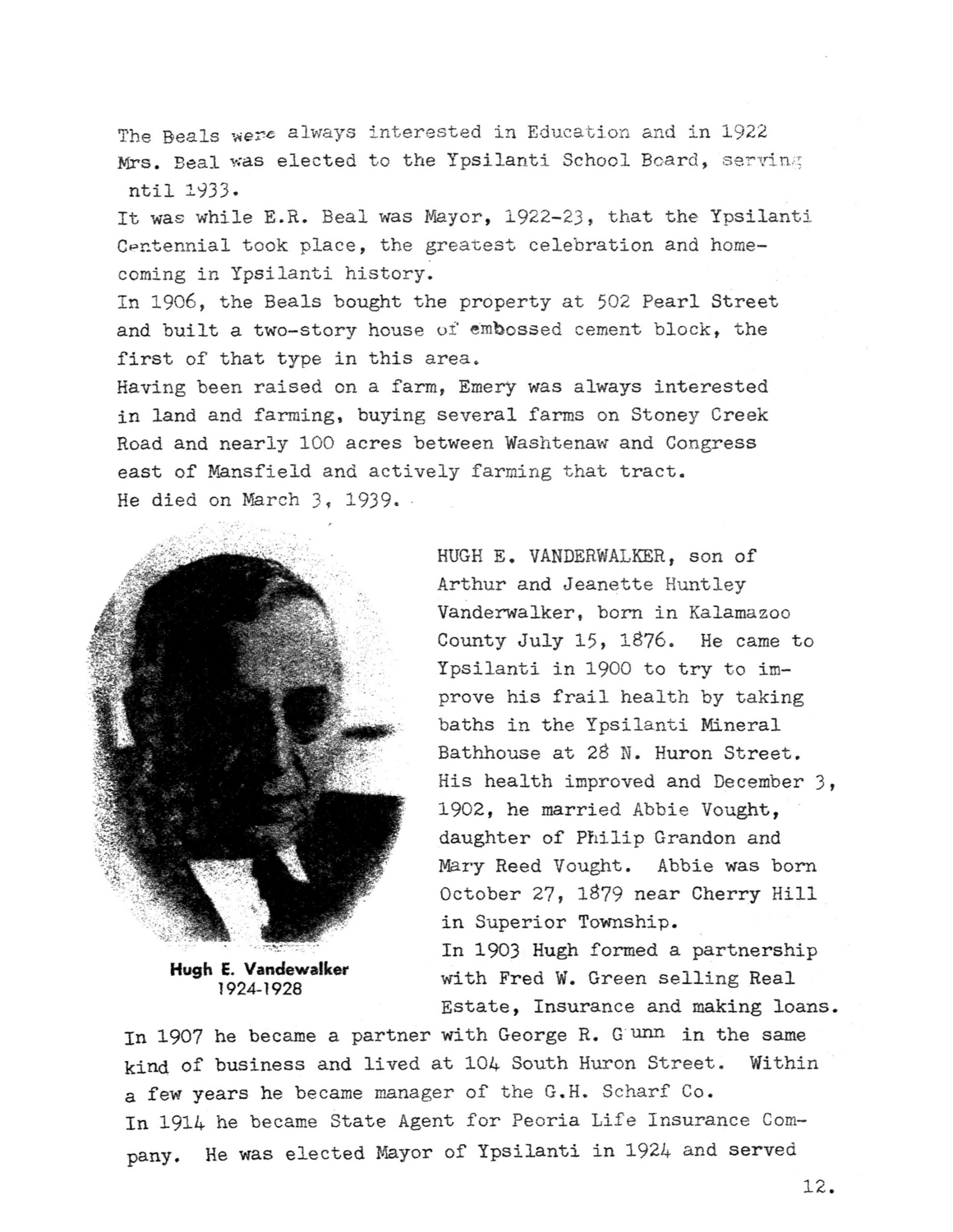 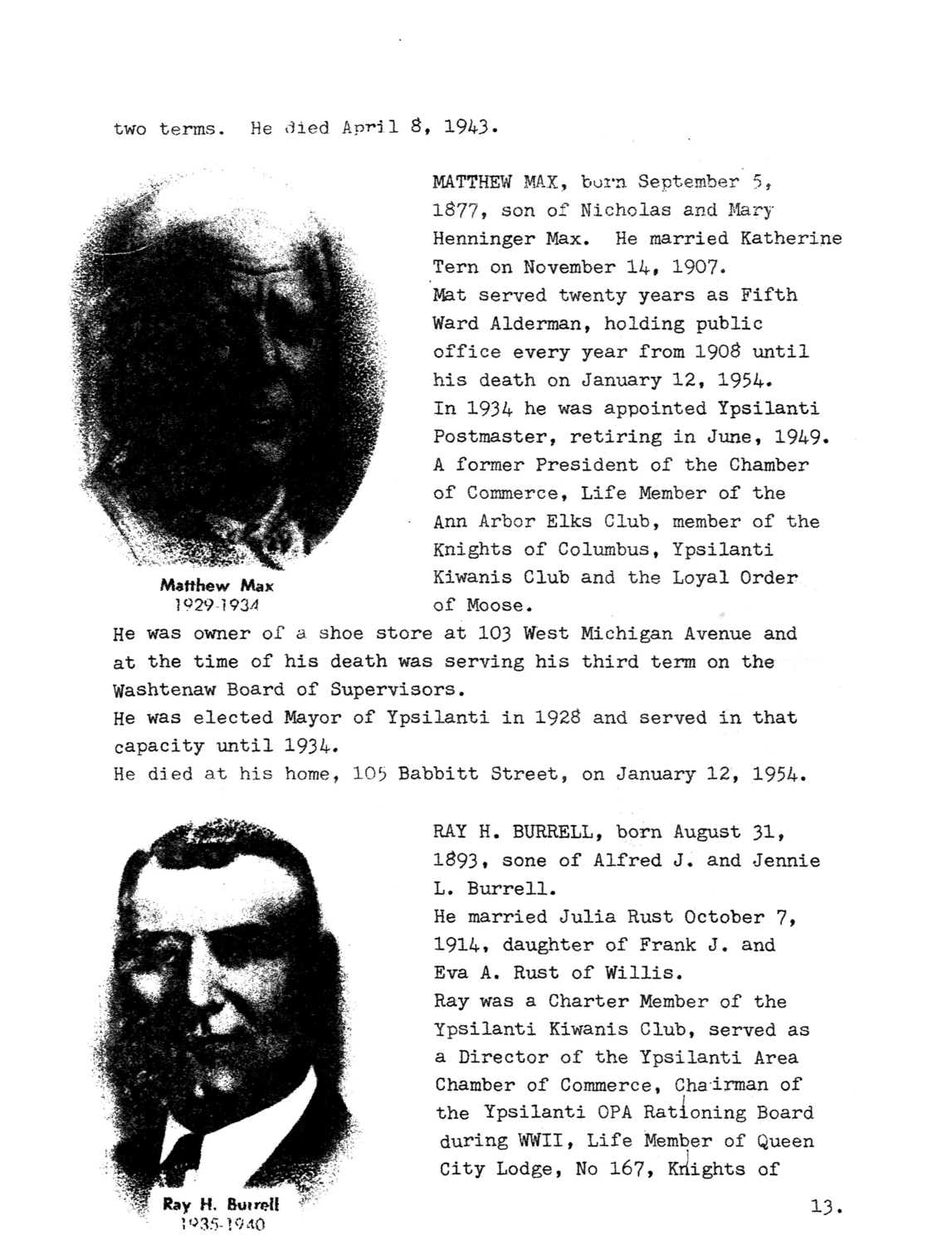 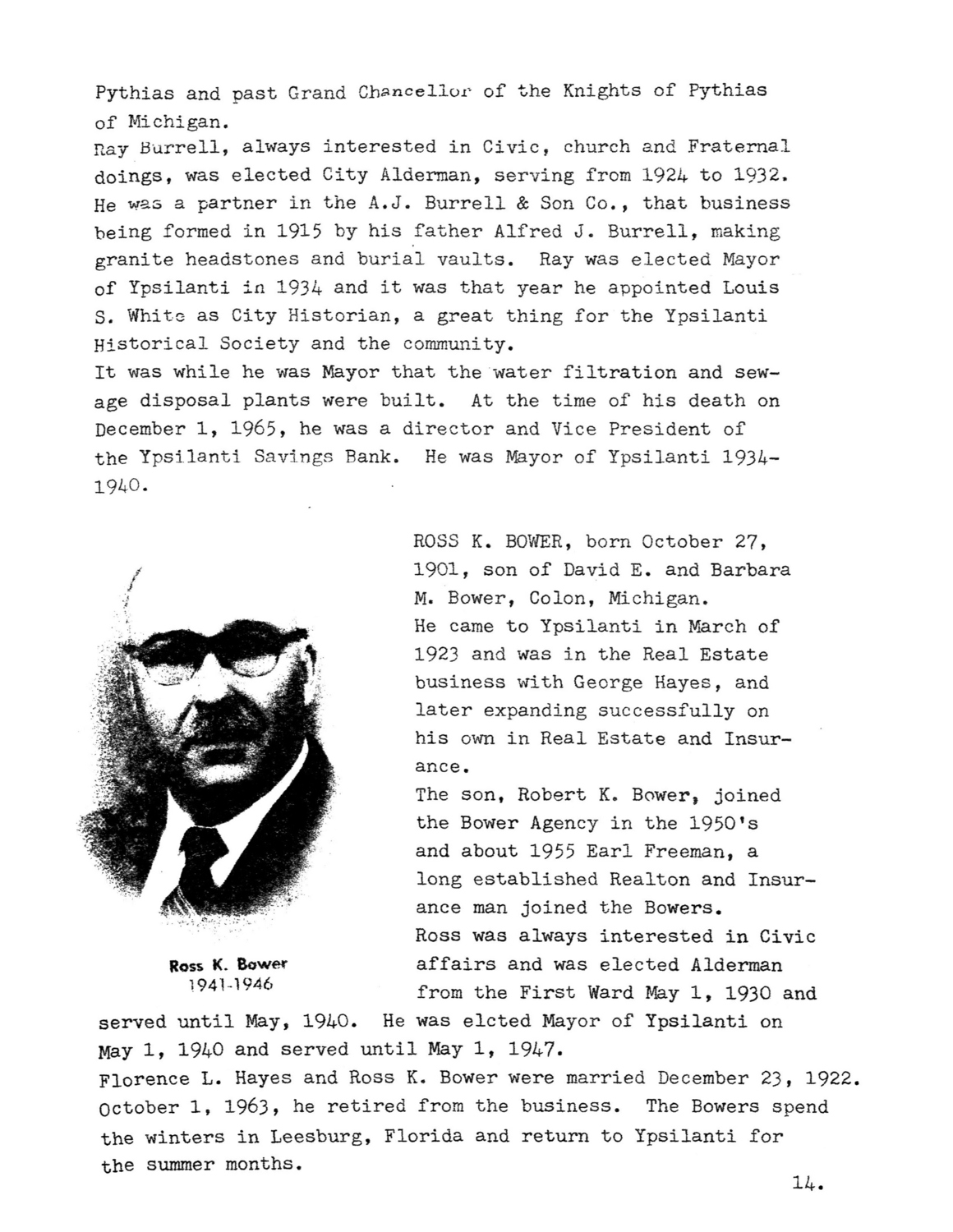 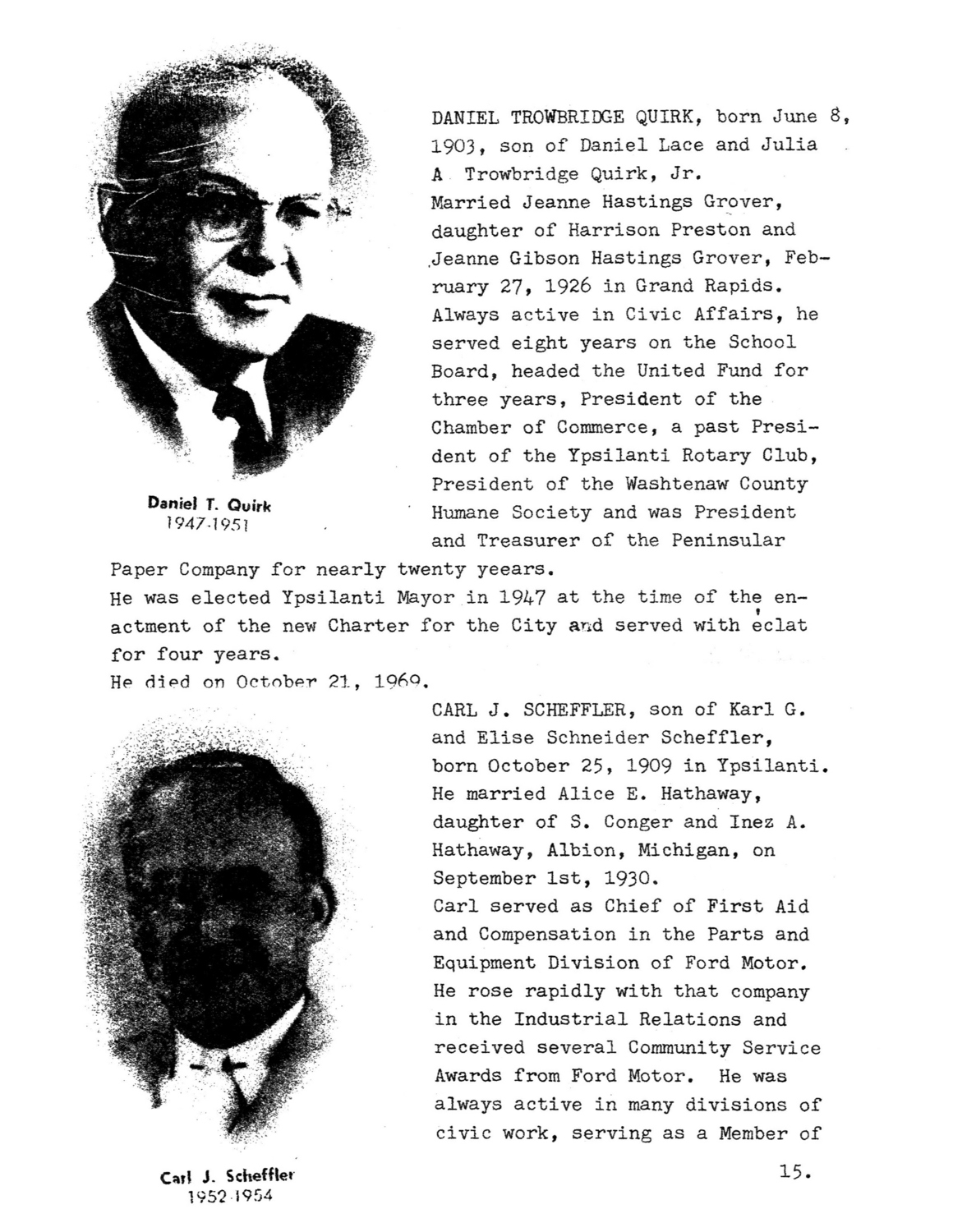 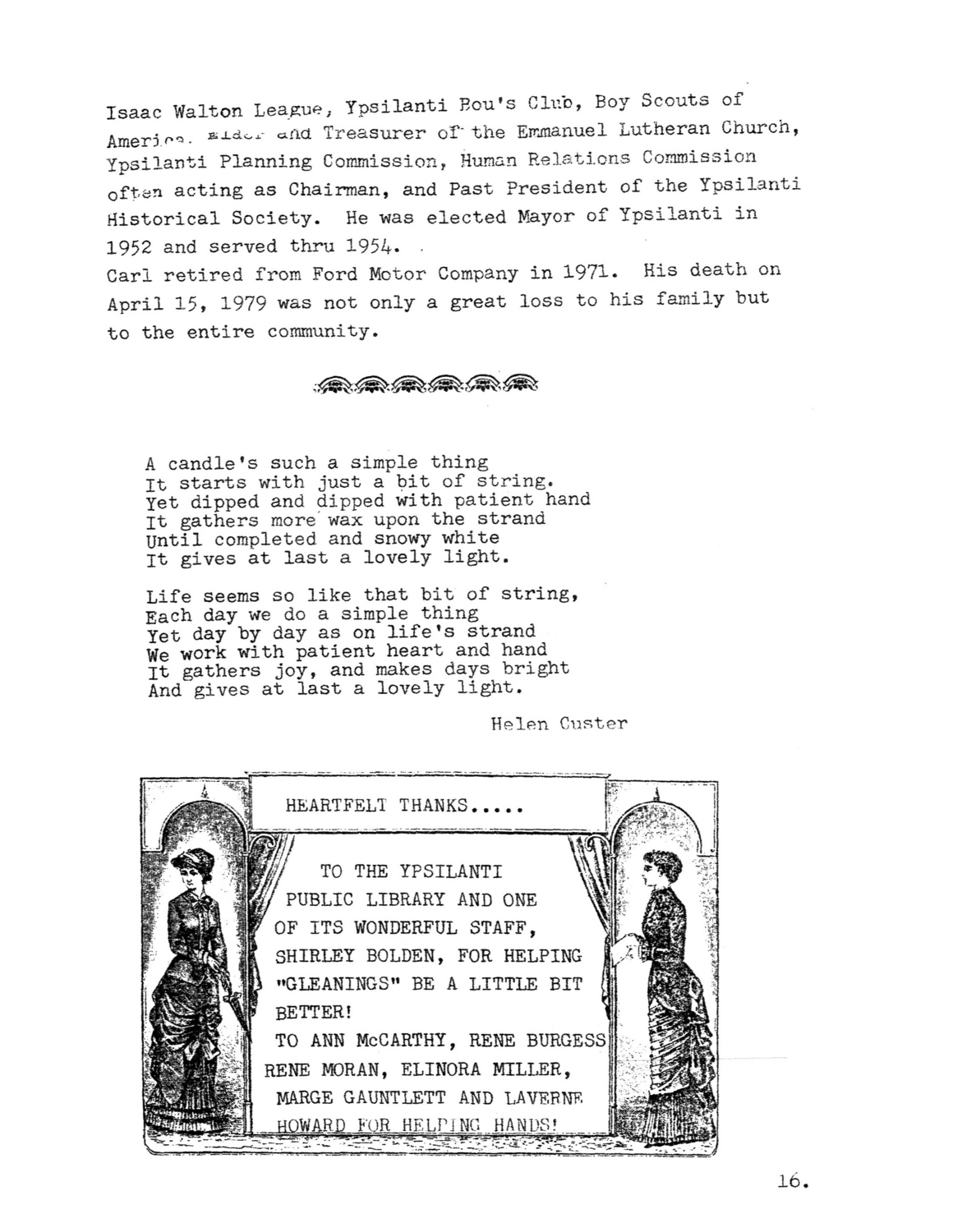 The biographical profiles of the Mayors of Ypsilanti will be presented in “Gleanings” in three segments. The first profiles appeared in the October, 1981 issue. This is the second of the series.

Came to Ypsilanti Township with parents in 1839 and lived on Willis Road just west of Hitchingham Road. At an early age he worked as a clerk in the dry goods store of Hewitt Bros.

Surely one of Ypsilanti's most distinguished citizens.

In 1861 he served as a Commercial traveler and as an Insurance Agent for many years. He served as Alderman from the 3rd Ward and always took an active part in City Affairs. Elected Mayor of Ypsilanti 1893–94. He died in 1916.

Harlow Davis Wells, born January 15, 1855 on a farm in Wayne County. He was the son of Chandler and Eliza Davis Wells.

He married Violette Riggs of Belleville on March 2, 1897. Harlow was born son of Harlow and Eliza Davis but after his father died, his mother married Rev. Chandler Wells and Harlow assumed the name of Wells.

He was a partner with Hiram Fisk in the grocery located at 123 West Michigan. Always active in politics, he was appointed Postmaster in 1900 and served for 4 years. Also Alderman from the 3rd Ward living at 309 West Cross Street and then elected Mayor in 1895. Died February 24, 1913.

He was a graduate of Smithfield Academy, Smithfield, Pa. and the University of West Virginia. In 1887 he went to California for two years and then came to Ypsilanti and entered the hardware business with F.L. Shaefer at 124 West Michigan until his death, July 28, 1906.

He married Mary Elizabeth Robinson in 1875 and they lived at 801 Congress Street.

Active in Ypsilanti politics, he was elected Mayor in 1897–98.

With his father, Parmenio and then with J. Herbert Hopkins, he operated a grocery and general store at 42–44 East Cross in the 1890's as well as a Crockery, Grocery and Bakery at 131–133 West Congress St. (Michigan Ave.) and moving that store to 200 West Congress in 1905 when the First National Bank bought the property at 131–133 Congress.

OLIVER EMERSON THOMPSON, son of Benjamin and Mercy S. Thompson, born in 1838. Married Elizabeth Cooper, who was born on November 17, 1838.

Oliver had several business enterprises in the big brick building at 400–6 River Street. A dealer for agriculture implements, he had an extensive stock of paints, oils, wagons, carriages and other farm items, manufacturing several of them. The Thompson Family had extensive real estate holdings on East Cross Street and extending north to Maple Street.

Always interested in banking and civic affairs, he was elected Mayor of Ypsilanti 1901–2. Died in 1910.

MARTIN DAWSON, born November 11, 1862 in Limerick, Ireland, son of Michael and Bridget Dawson and lived on a farm near Willis, Michigan. Married Mary (Mamie) Fletcher January 6, 1886, daughter of Franklin and Mary Harris Fletcher. In 1892 he moved from Willis to Ypsilanti and became a partner with Clifford R. Huston in Flour, Feed and Farm Implement business located at 14 South Washington Street.

In 1901 the partnership dissolved and Martin Dawson opened an Implement and Feed Store at 213–215 West Michigan. In 1907 he became the Agent for the Overland automobile. He was elected Mayor of Ypsilanti in 1902. His old partner, Clifford R. Huston, became Mayor the next year. He died March 21, 1915.

He graduated from Michigan State Normal College in 1886 and studied law at the University of Michigan. Married Sarah Eudora Fairbain of Detroit on September 10, 1901. He was a business partner with Martin Dawson from 1892 to 1902. Elected Ypsilanti Mayor in 1903 and in 1905 moved to Detroit where he was a grain broker. He died in Detroit on July 9, 1931 and was given a Masonic funeral.

He graduated from Ypsilanti High School in 1886 and the University of Michigan Law School in 1888. On June 8, 1891, he was appointed City Attorney and was a partner in the Law Office of Judge J.W. Babbitt.

John served as 1st Lieutenant, Co. H. Fourth Regiment, Michigan State Troops and became a Colonel at the time of the Spanish-American War, 1898–1899.

TRACY LAY TOWNER, born March 2, 1864, son of Norman and Jeannette Spencer Towner in Ypsilanti. Some of the family came to Ypsilanti in 1835 from New York State and others followed in 1856. Tracy graduated from the old Seminary and from the University of Michigan Law School in 1888, the same class as his close friend, John P. Kirk.

As an attorney and representing five Insurance Companies, he maintained an office in the Ypsilanti Savings Bank Building at 1 South Huron Street. He was elected Mayor in 1910

He attended the old Seminary and later “read Law” in various offices of attorneys and passed the State Bar examination. Began as an attorney in 1893 and had his office at 10 E. Cross Street.

He was elected Mayor of Ypsilanti in 1914 and it was during his term that Michigan Street became Ferris Street and Congress Street became Michigan Avenue.

He married Bessie M. Cannan in May, 1900 and they moved to Ypsilanti on March 1st, 1911, having recently purchased an interest in Press Steel Whiffletree Company, changing the name to United States Pressed Steel Whiffletree Company in 1912. This plant was located near Stewart Street where the old Cornwell papermill was located, now site of Ford Motor Company plant. “C.V.”, as he was called, was active in business and social affairs and was a Charter Member in 1917 of the Ypsilanti Rotary Club.

He served two terms as Mayor, being elected first in 1916 and serving thru WW years.

The plant and property was sold to Ford Motor Company in 1930 and the Browns moved to Kalamazoo, where he died several years ago.

After graduating from Cleary Business College, he worked in the office of the Michigan Central Railroad and in 1909 was hired by Ford Motor Company as company representative for Washtenaw County and much of Michigan. In 1910, when there were only six automobiles registered in all of Washtenaw County, and E.G. Wiedman established a Ford Agency for Washtenaw County with headquarters in Saline, Michigan. They sold the models that preceded the Model-T Ford and soon moved their business to Ypsilanti locating in a brick building known as the Hawkins Garage, at the rear of 27 N. Washington Street.

It was in the early spring of 1912 a disasterous fire struck that building. Undaunted, property at 212–14 Pearl Street was bought and a modern garage built. The partnership dissolved with Emmanuel G. Wiedman retaining the Ford dealership at 212 Pearl Street and Schaible built a salesroom and garage for the Buick agency at the southwest corner of East Michigan Avenue and River Street. He had pioneered in selling the Model-T Ford, the Maxwell, Buick six, the LaSalle, the Cadillac 12, Rochne and Studebaker Champion.

EMERY RICHARD BEAL, son of Joseph and Martha Beal, was born on December 5, 1865 on a farm near Farmington, Michigan.

After High School, he graduated from the University of Michigan in 1885.

He came to Ypsilanti in 1893 and established a Drug Store at 224 West Michigan and lived in the building above the store.

June 9th, 1897, he married Minnie B. Jenkins of Portland, Michigan who had been a student at the Michigan State Normal College in 1895–96.

The Beals were always interested in Education and in 1922 Mrs. Beal was elected to the Ypsilanti School Board, serving until 1933.

It was while E.R. Beal was Mayor, 1922–23, that the Ypsilanti Centennial took place, the greatest celebration and home-coming in Ypsilanti history.

In 1906, the Beals bought the property at 502 Pearl Street and built a two-story house of embossed cement block, the first of that type in this area. Having been raised on a farm, Emery was always interested in land and farming, buying several farms on Stoney Creek Road and nearly 100 acres between Washtenaw and Congress east of Mansfield and actively farming that tract.

HUGH E. VANDERWALKER, son of Arthur and Jeanette Huntley Vanderwalker, born in Kalamazoo County July 15, 1876. He came to Ypsilanti in 1900 to try to improve his frail health by taking baths in the Ypsilanti Mineral Bathhouse at 28 N. Huron Street. His health improved and December 3, 1902, he married Abbie Vought, daughter of Philip Grandon and Mary Reed Vought. Abbie was born October 27, 1879 near Cherry Hill in Superior Township.

In 1907 he became a partner with George R. Gunn in the same kind of business and lived at 104 South Huron Street. Within a few years he became manager of the G.H. Scharf Co.

In 1914 he became State Agent for Peoria Life Insurance Company. He was elected Mayor of Ypsilanti in 1924 and served two terms. He died April 8, 1943.

Mat served twenty years as Fifth Ward Alderman, holding public office every year from 1908 until his death on January 12, 1954.

In 1934 he was appointed Ypsilanti Postmaster, retiring in June, 1949. A former President of the Chamber of Commerce, Life Member of the Ann Arbor Elks Club, member of the Knights of Columbus, Ypsilanti Kiwanis Club and the Loyal Order of Moose.

He was owner of a shoe store at 103 West Michigan Avenue and at the time of his death was serving his third term on the Washtenaw Board of Supervisors.

He was elected Mayor of Ypsilanti in 1928 and served in that capacity until 1934.

Ray Burrell, always interested in Civic, church and Fraternal doings, was elected City Alderman, serving from 1924 to 1932. He was a partner in the A.J. Burrell & Son Co., that business being formed in 1915 by his father Alfred J. Burrell, making granite headstones and burial vaults. Ray was elected Mayor of Ypsilanti in 1934 and it was that year he appointed Louis S. White as City Historian, a great thing for the Ypsilanti Historical Society and the community.

It was while he was Mayor that the water filtration and sewage disposal plants were built. At the time of his death on December 1, 1965, he was a director and Vice President of the Ypsilanti Savings Bank. He was Mayor of Ypsilanti 1934–1940.

He came to Ypsilanti in March of 1923 and was in the Real Estate business with George Hayes, and later expanding successfully on his own in Real Estate and Insurance.

Florence L. Hayes and Ross K. Bower were married December 23, 1922. October 1, 1963, he retired from the business. The Bowers spend the winters in Leesburg, Florida and return to Ypsilanti for the summer months.

Always active in Civic Affairs, he served eight years on the School Board, headed the United Fund for three years, President of the Chamber of Commerce, a past President of the Ypsilanti Rotary Club, President of the Washtenaw County Humane Society and was President and Treasurer of the Peninsular Paper Company for nearly twenty yeears.

He was elected Ypsilanti Mayor in 1947 at the time of the enactment of the new Charter for the City and served with eclat for four years.

Carl served as Chief of First Aid and Compensation in the Parts and Equipment Division of Ford Motor. He rose rapidly with that company in the Industrial Relations and received several Community Service Awards from Ford Motor. He was always active in many divisions of civic work, serving as a Member of Isaac Walton League, Ypsilanti Boy's Club, Boy Scouts of America. and Treasurer of the Emmanuel Lutheran Church, Ypsilanti Planning Commission, Human Relations Commission often acting as Chairman, and Past President of the Ypsilanti Historical Society. He was elected Mayor of Ypsilanti in 1952 and served thru 1954.

Carl retired from Ford Motor Company in 1971. His death on April 15, 1979 was not only a great loss to his family but to the entire community.