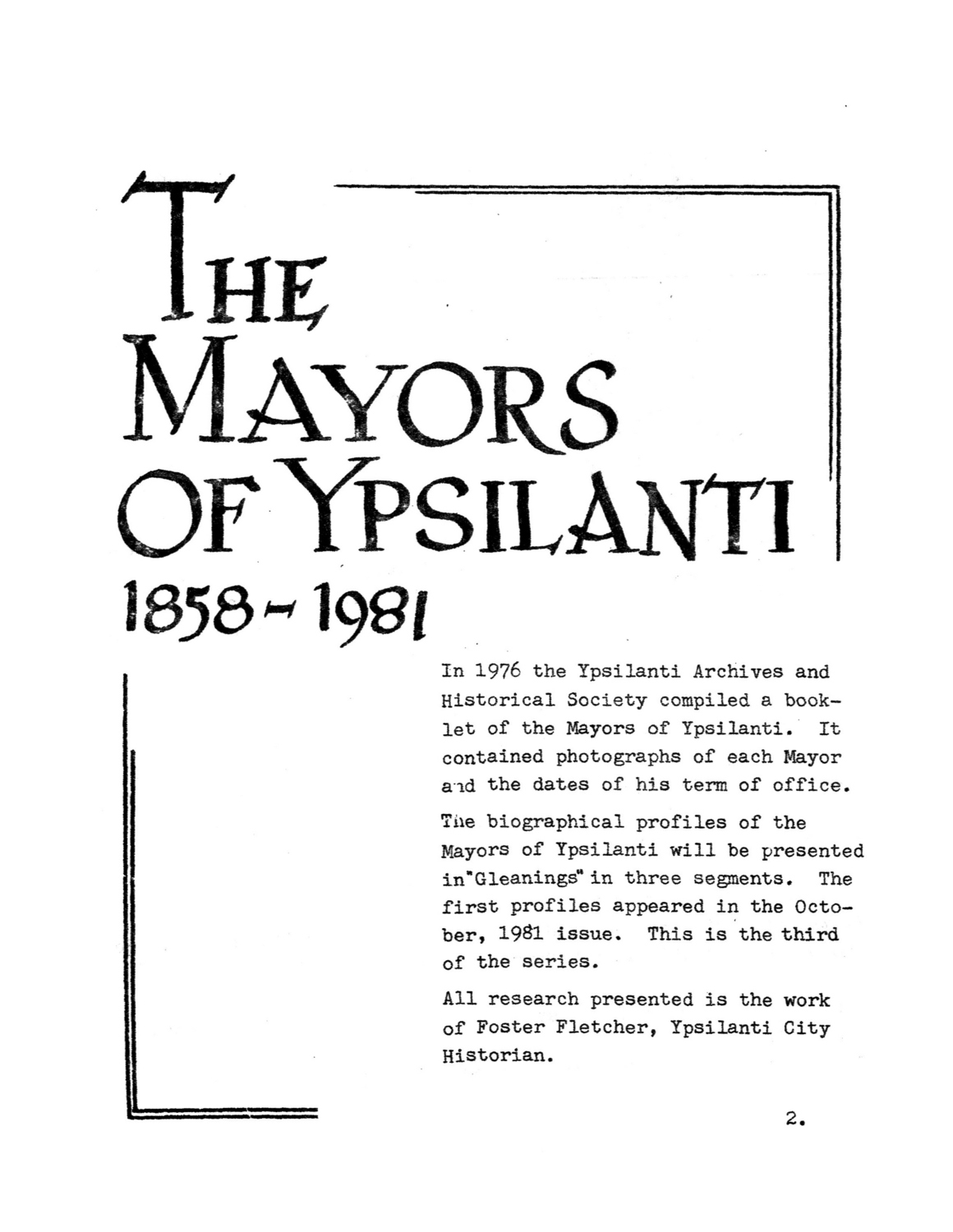 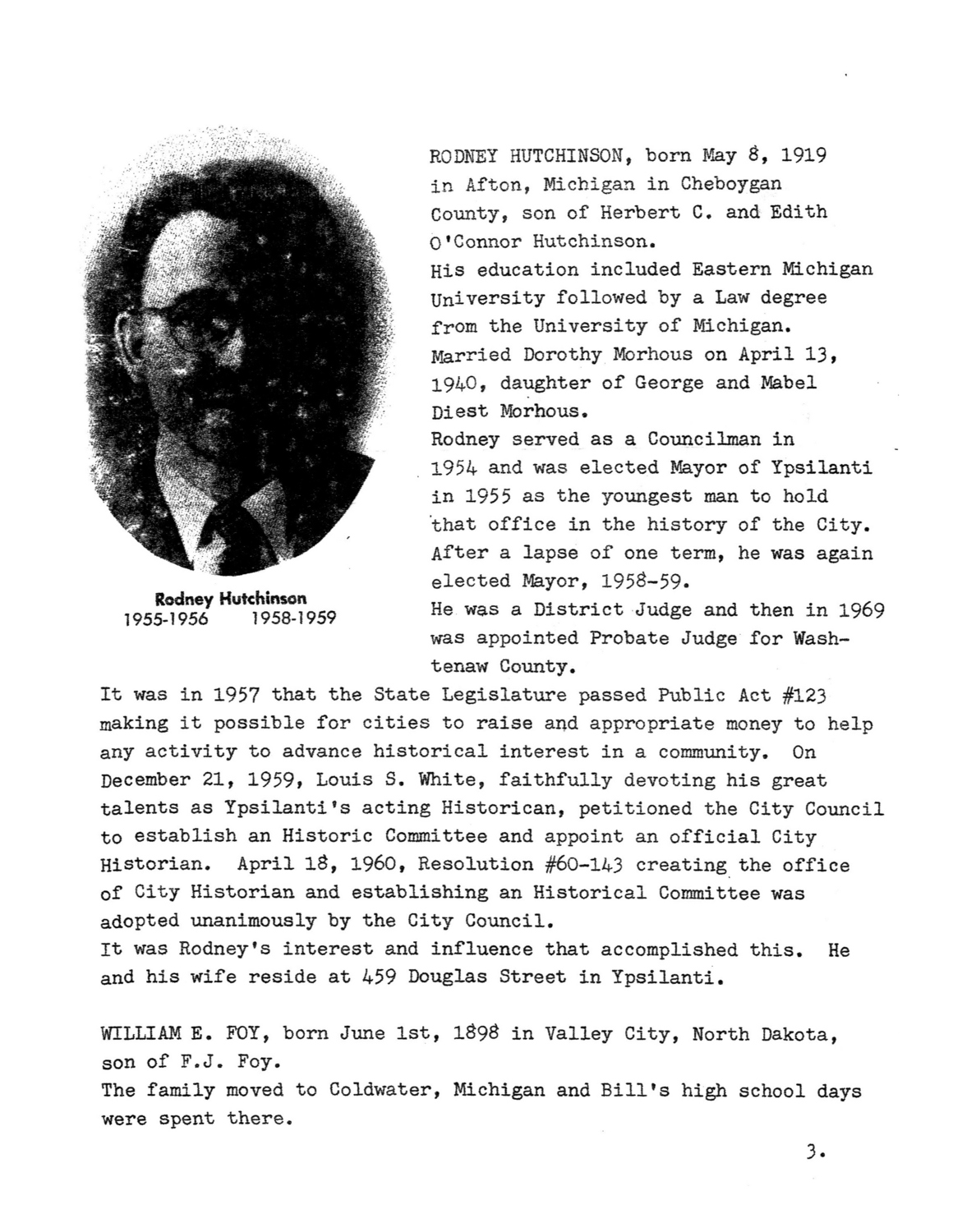 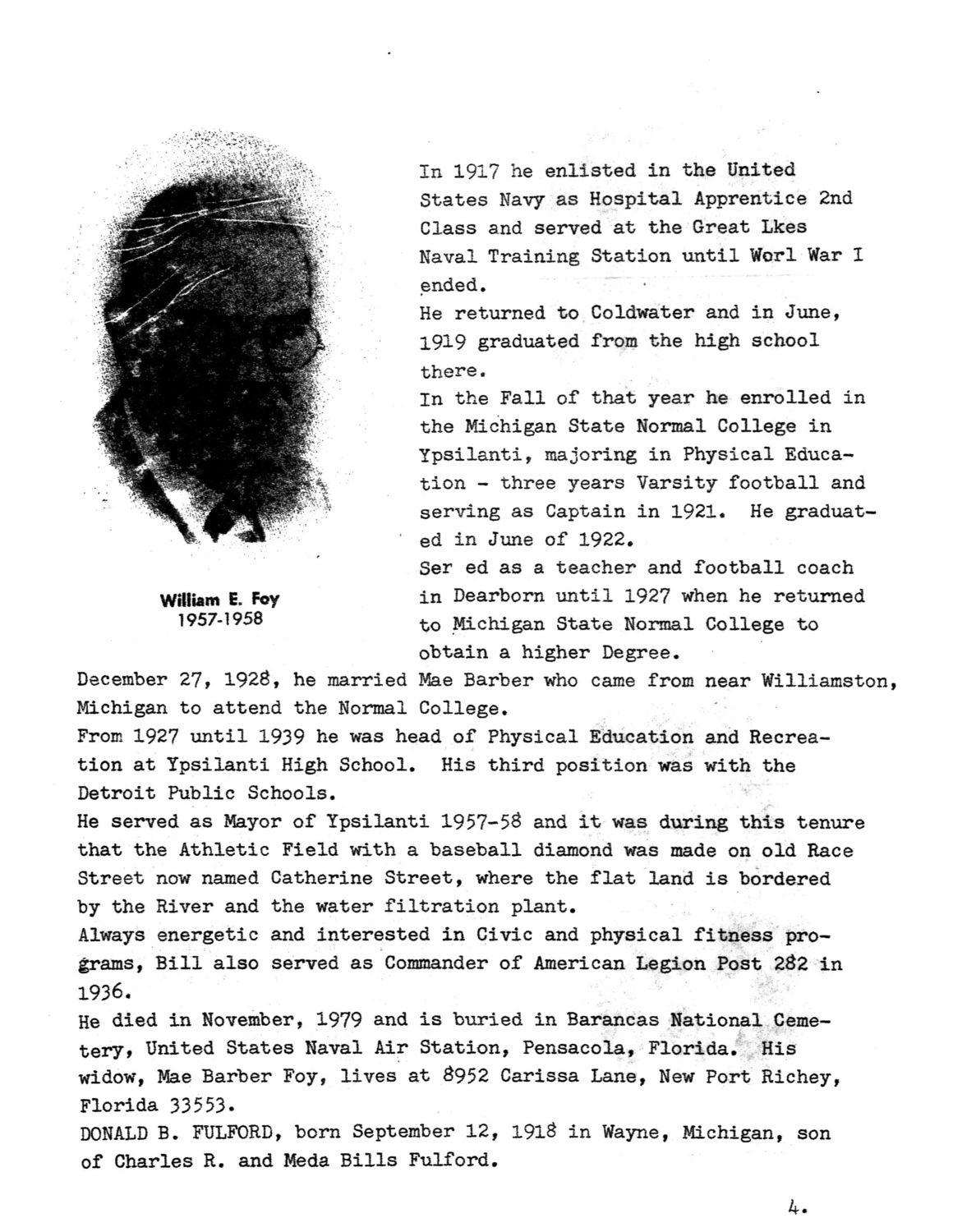 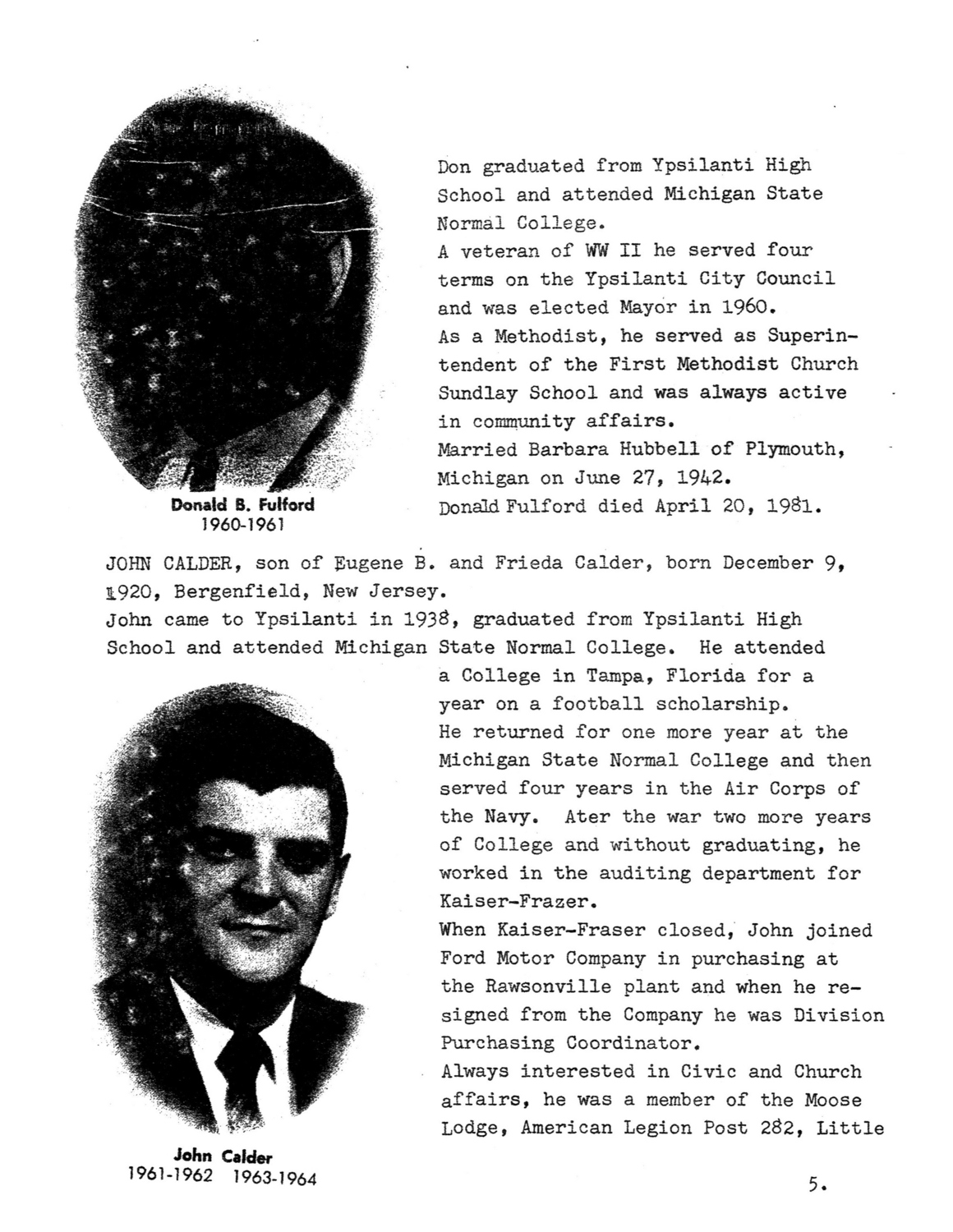 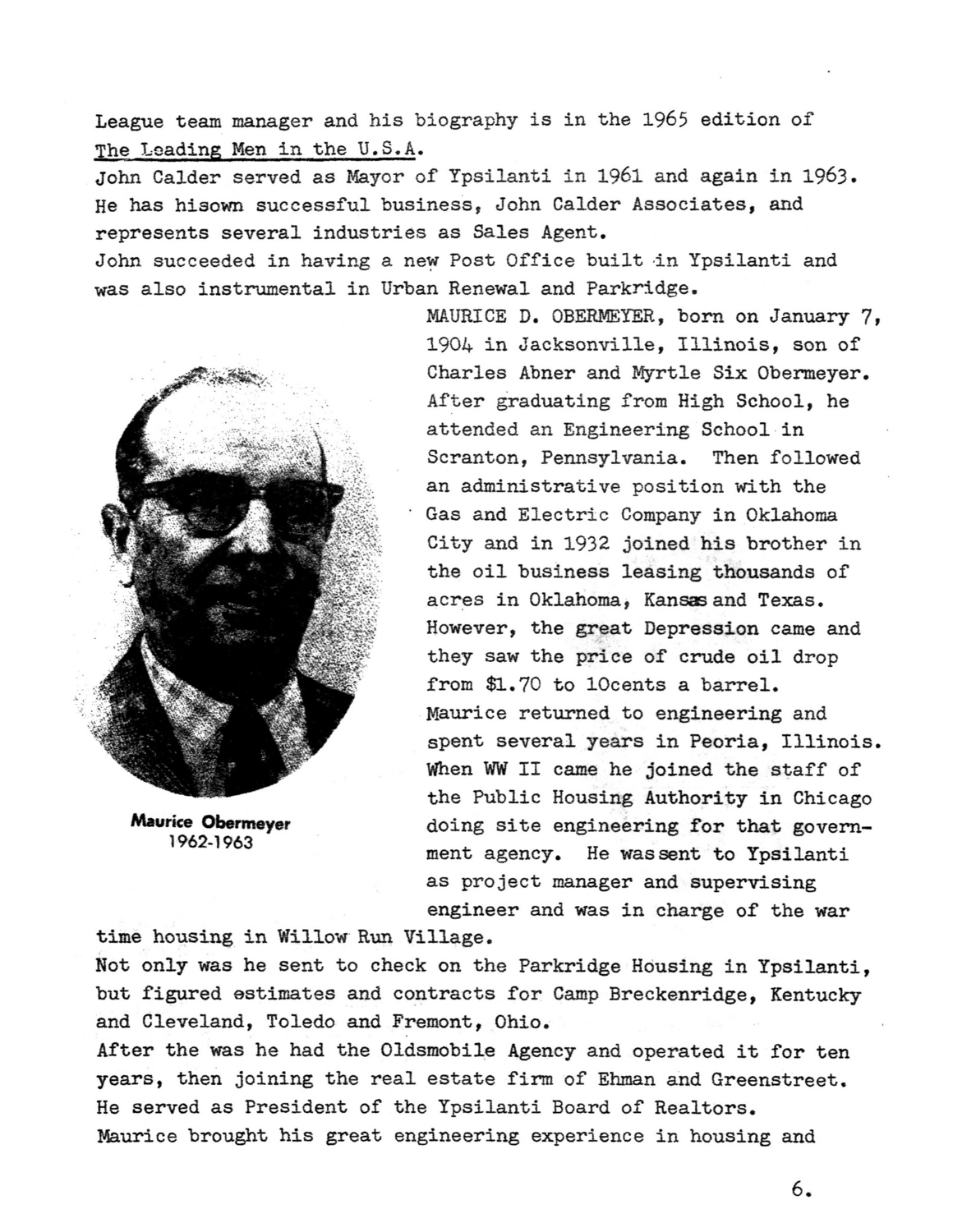 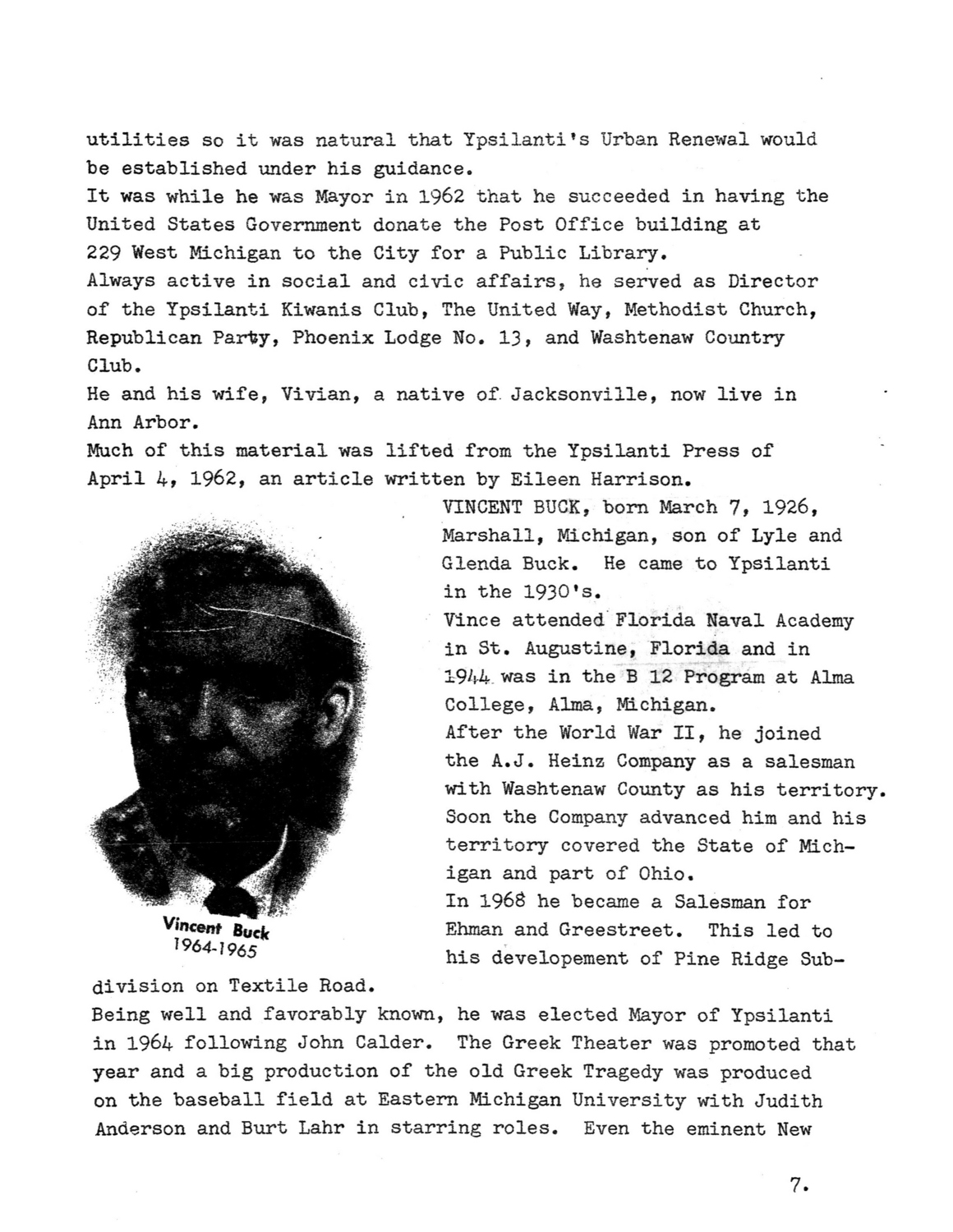 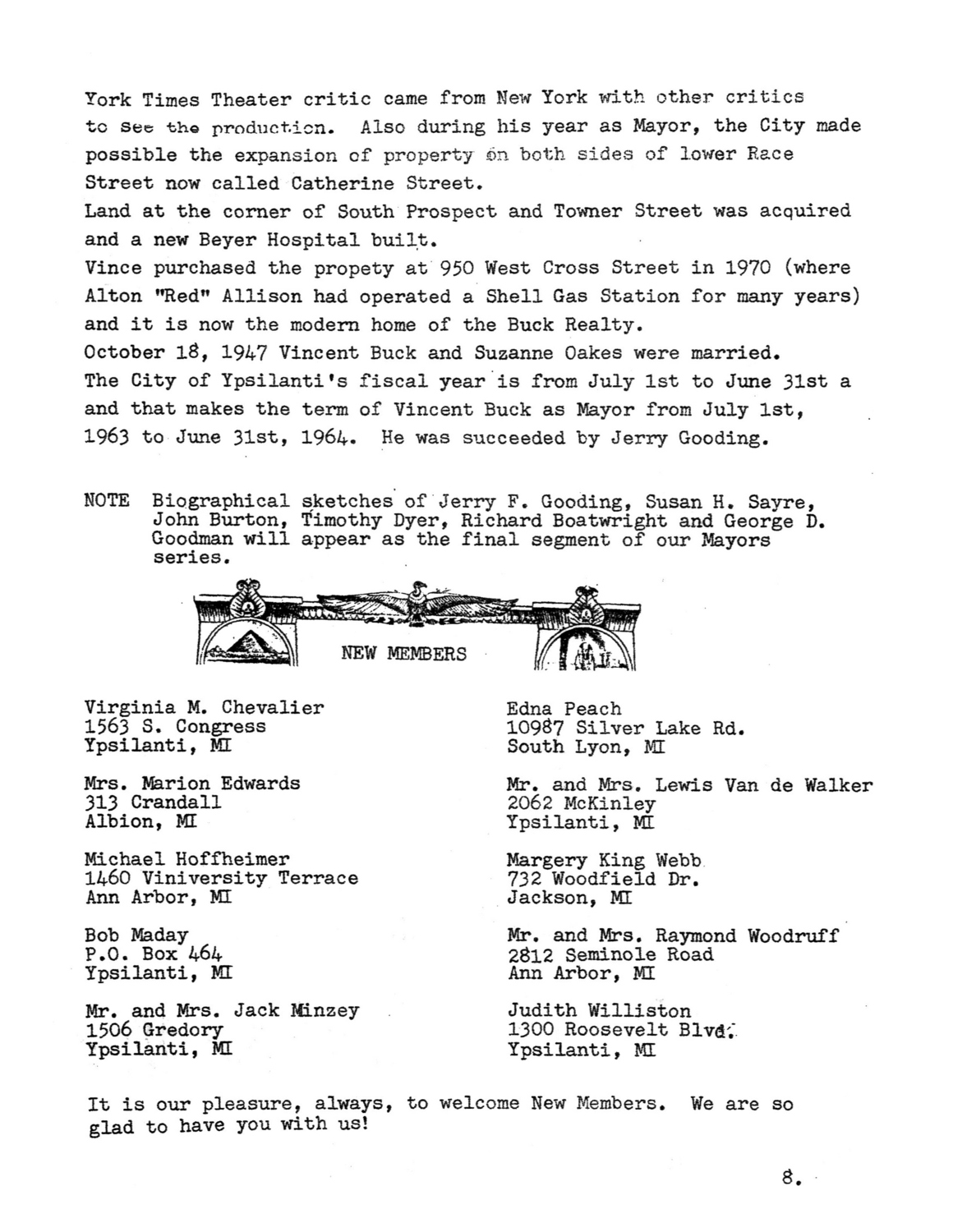 The biographical profiles of the Mayors of Ypsilanti will be presented in “Gleanings” in three segments. The first profiles appeared in the October, 1981 issue. This is the third of the series.

His education included Eastern Michigan University followed by a Law degree from the University of Michigan. Married Dorothy Morhous on April 13, 1940, daughter of George and Mabel Diest Morhous.

Rodney served as a Councilman in 1954 and was elected Mayor of Ypsilanti in 1955 as the youngest man to hold that office in the history of the City. After a lapse of one term, he was again elected Mayor, 1958–59.

He was a District Judge and then in 1969 was appointed Probate Judge for Washtenaw County.

It was in 1957 that the State Legislature passed Public Act #123 making it possible for cities to raise and appropriate money to help any activity to advance historical interest in a community. On December 21, 1959, Louis S. White, faithfully devoting his great talents as Ypsilanti's acting Historian, petitioned the City Council to establish an Historic Committee and appoint an official City Historian. April 18, 1960, Resolution #60–143 creating the office of City Historian and establishing an Historical Committee was adopted unanimously by the City Council.

It was Rodney's interest and influence that accomplished this. He and his wife reside at 459 Douglas Street in Ypsilanti.

The family moved to Coldwater, Michigan and Bill's high school days were spent there.

In 1917 he enlisted in the United States Navy as Hospital Apprentice 2nd Class and served at the Great Lakes Naval Training Station until World War I ended.

He returned to Coldwater and in June, 1919 graduated from the high school there.

In the Fall of that year he enrolled in the Michigan State Normal College in Ypsilanti, majoring in Physical Education--three years Varsity football and serving as Captain in 1921. He graduated in June of 1922.

Served as a teacher and football coach in Dearborn until 1927 when he returned to Michigan State Normal College to obtain a higher Degree.

December 27, 1928, he married Mae Barber who came from near Williamston, Michigan to attend the Normal College.

From 1927 until 1939 he was head of Physical Education and Recreation at Ypsilanti High School. His third position was with the Detroit Public Schools.

He served as Mayor of Ypsilanti 1957–58 and it was during this tenure that the Athletic Field with a baseball diamond was made on old Race Street now named Catherine Street, where the flat land is bordered by the River and the water filtration plant.

Always energetic and interested in Civic and physical fitness programs, Bill also served as Commander of American Legion Post 282 in 1936

A veteran of WW II he served four terms on the Ypsilanti City Council and was elected Mayor in 1960.

As a Methodist, he served as Superintendent of the First Methodist Church Sunday School and was always active in community affairs.

John came to Ypsilanti in 1938, graduated from Ypsilanti High School and attended Michigan State Normal College. He attended a College in Tampa, Florida for a year on a football scholarship. He returned for one more year at the Michigan State Normal College and then served four years in the Air Corps of the Navy. After the war two more years of College and without graduating, he worked in the auditing department for Kaiser-Frazer.

When Kaiser-Fraser closed, John joined Ford Motor Company in purchasing at the Rawsonville plant and when he resigned from the Company he was Division Purchasing Coordinator.

Always interested in Civic and Church affairs, he was a member of the Moose Lodge, American Legion Post 282, Little League team manager and his biography is in the 1965 edition of The Leading Men in the U.S.A.

He has his own successful business, John Calder Associates, and represents several industries as Sales Agent.

John succeeded in having a new Post Office built in Ypsilanti and was also instrumental in Urban Renewal and Parkridge.

MAURICE D. OBERMEYER, born on January 7, 1904 in Jacksonville, Illinois, son of Charles Abner and Myrtle Six Obermeyer. After graduating from High School, he attended an Engineering School in Scranton, Pennsylvania. Then followed an administrative position with the Gas and Electric Company in Oklahoma City and in 1932 joined his brother in the oil business leasing thousands of acres in Oklahoma, Kansas and Texas.

However, the Great Depression came and they saw the price of crude oil drop from &dollar;1.70 to 10 cents a barrel.

Maurice returned to engineering and spent several years in Peoria, Illinois. When WW II came he joined the staff of the Public Housing Authority in Chicago doing site engineering for that government agency. He was sent to Ypsilanti as project manager and supervising engineer and was in charge of the war time housing in Willow Run Village.

Not only was he sent to check on the Parkridge Housing in Ypsilanti, but figured estimates and contracts for Camp Breckenridge, Kentucky and Cleveland, Toledo and Fremont, Ohio.

After the was he had the Oldsmobile Agency and operated it for ten years, then joining the real estate firm of Ehman and Greenstreet. He served as President of the Ypsilanti Board of Realtors.

Maurice brought his great engineering experience in housing and utilities so it was natural that Ypsilanti's Urban Renewal would be established under his guidance.

It was while he was Mayor in 1962 that he succeeded in having the United States Government donate the Post Office building at 229 West Michigan to the City for a Public Library.

Always active in social and civic affairs, he served as Director of the Ypsilanti Kiwanis Club, The United Way, Methodist Church, Republican Party, Phoenix Lodge No. 13, and Washtenaw Country Club.

He and his wife, Vivian, a native of Jacksonville, now live in Ann Arbor.

Much of this material was lifted from the Ypsilanti Press of April 4, 1962, an article written by Eileen Harrison.

Vince attended Florida Naval Academy in St. Augustine, Florida and in 1944 was in the B 12 Program at Alma College, Alma, Michigan.

After the World War II, he joined the A.J. Heinz Company as a salesman with Washtenaw County as his territory. Soon the Company advanced him and his territory covered the State of Michigan and part of Ohio.

In 1968 he became a Salesman for Ehman and Greestreet. This led to his development of Pine Ridge Subdivision on Textile Road.

Being well and favorably known, he was elected Mayor of Ypsilanti in 1964 following John Calder. The Greek Theater was promoted that year and a big production of the old Greek Tragedy was produced on the baseball field at Eastern Michigan University with Judith Anderson and Burt Lahr in starring roles. Even the eminent New York Times Theater critic came from New York with other critics to see the production. Also during his year as Mayor, the City made possible the expansion of property on both sides of lower Race Street now called Catherine Street.

Land at the corner of South Prospect and Towner Street was acquired and a new Beyer Hospital built.

Vince purchased the property at 950 West Cross Street in 1970 (where Alton “Red” Allison had operated a Shell Gas Station for many years) and it is now the modern home of the Buck Realty.