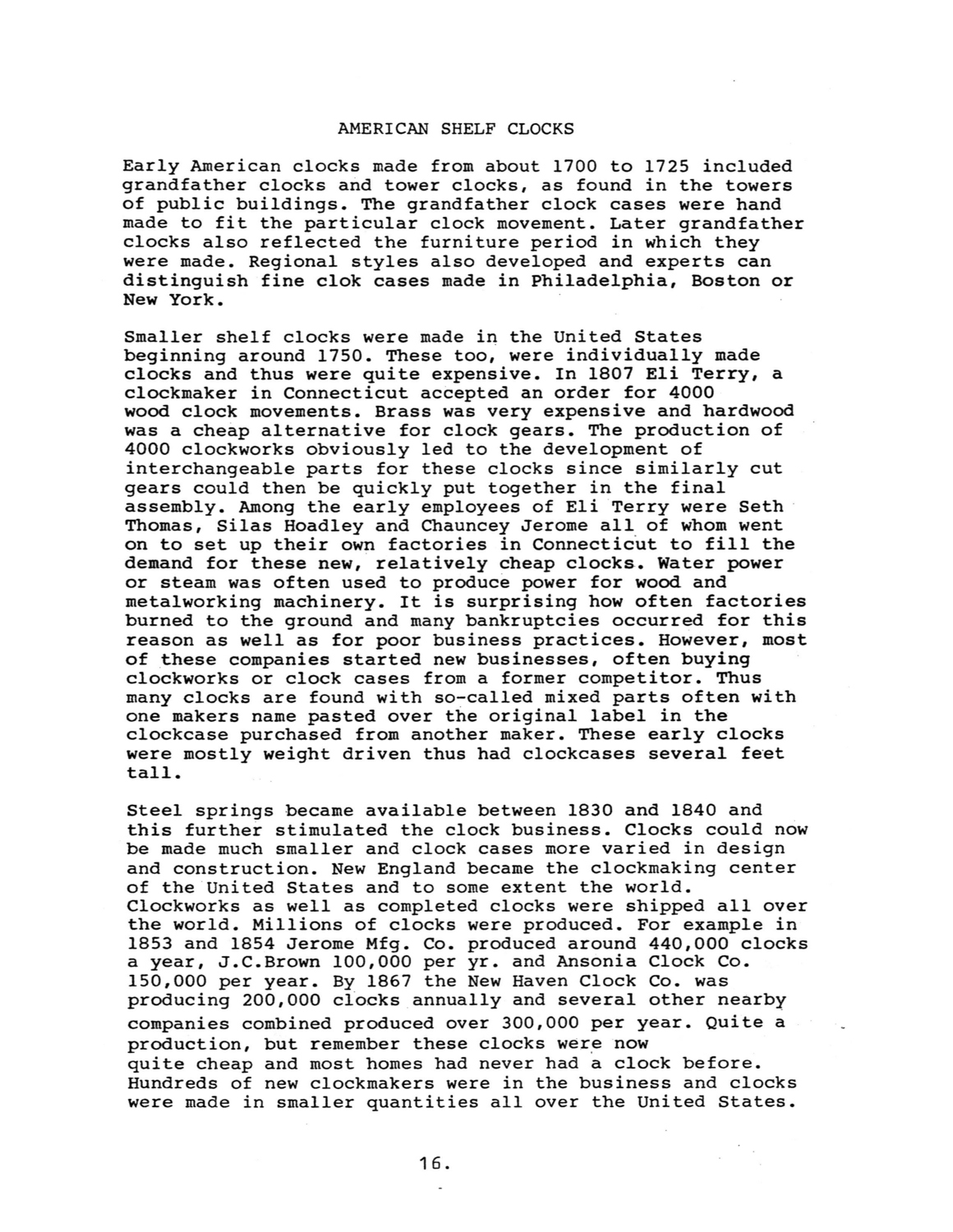 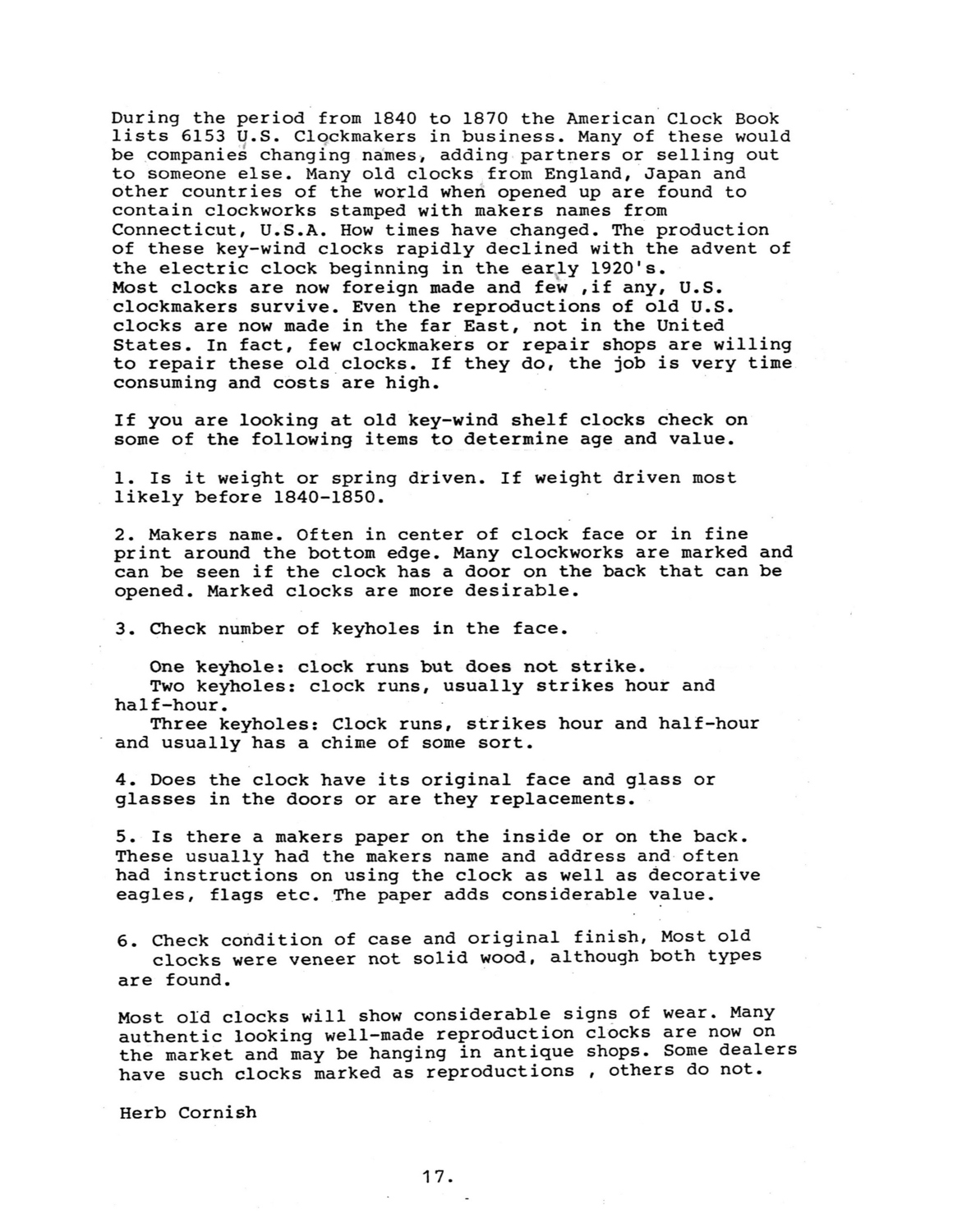 Early American clocks made from about 1700 to 1725 included grandfather clocks and tower clocks, as found in the towers of public buildings. The grandfather clock cases were hand made to fit the particular clock movement. Later grandfather clocks also reflected the furniture period in which they were made. Regional styles also developed and experts can distinguish fine clok cases made in Philadelphia, Boston or New York.

Smaller shelf clocks were made in the United States beginning around 1750. These too, were individually made clocks and thus were quite expensive. In 1807 Eli Terry, a clockmaker in Connecticut accepted an order for 4000 wood clock movements. Brass was very expensive and hardwood was a cheap alternative for clock gears. The production of 4000 clockworks obviously led to the development of interchangeable parts for these clocks since similarly cut gears could then be quickly put together in the final assembly. Among the early employees of Eli Terry were Seth Thomas, Silas Hoadley and Chauncey Jerome all of whom went on to set up their own factories in Connecticut to fill the demand for these new, relatively cheap clocks. Water power or steam was often used to produce power for wood and metalworking machinery. It is surprising how often factories burned to the ground and many bankruptcies occurred for this reason as well as for poor business practices. However, most of these companies started new businesses, often buying clockworks or clock cases from a former competitor. Thus many clocks are found with so-called mixed parts often with one makers name pasted over the original label in the clockcase purchased from another maker. These early clocks were mostly weight driven thus had clockcases several feet tall.

Steel springs became available between 1830 and 1840 and this further stimulated the clock business. Clocks could now be made much smaller and clock cases more varied in design and construction. New England became the clockmaking center of the United States and to some extent the world. Clockworks as well as completed clocks were shipped all over the world. Millions of clocks were produced. For example in 1853 and 1854 Jerome Mfg. Co. produced around 440,000 clocks a year, J.C. Brown 100,000 per yr. and Ansonia Clock Co. 150,000 per year. By 1867 the New Haven Clock Co. was producing 200,000 clocks annually and several other nearby companies combined produced over 300,000 per year. Quite a production, but remember these clocks were now quite cheap and most homes had never had a clock before. Hundreds of new clockmakers were in the business and clocks were made in smaller quantities all over the United States. During the period from 1840 to 1870 the American Clock Book lists 6153 U.S. Clockmakers in business. Many of these would be companies changing names, adding partners or selling out to someone else. Many old clocks from England, Japan and other countries of the world when opened up are found to contain clockworks stamped with makers names from Connecticut, U.S.A. How times have changed. The production of these key-wind clocks rapidly declined with the advent of the electric clock beginning in the early 1920's. Most clocks are now foreign made and few, if any, U.S. clockmakers survive. Even the reproductions of old U.S. clocks are now made in the far East, not in the United States. In fact, few clockmakers or repair shops are willing to repair these old clocks. If they do, the job is very time consuming and costs are high.

If you are looking at old key-wind shelf clocks check on some of the following items to determine age and value.

2. Makers name. Often in center of clock face or in fine print around the bottom edge. Many clockworks are marked and can be seen if the clock has a door on the back that can be opened. Marked clocks are more desirable.

3. Check number of keyholes in the face.

One keyhole: clock runs but does not strike.

Three keyholes: Clock runs, strikes hour and half-hour and usually has a chime of some sort.

4. Does the clock have its original face and glass or glasses in the doors or are they replacements.

5. Is there a makers paper on the inside or on the back. These usually had the makers name and address and often had instructions on using the clock as well as decorative eagles, flags etc. The paper adds considerable value.

6. Check condition of case and original finish, Most old clocks were veneer not solid wood, although both types are found.

Most old clocks will show considerable signs of wear. Many authentic looking well-made reproduction clocks are now on the market and may be hanging in antique shops. Some dealers have such clocks marked as reproductions, others do not.