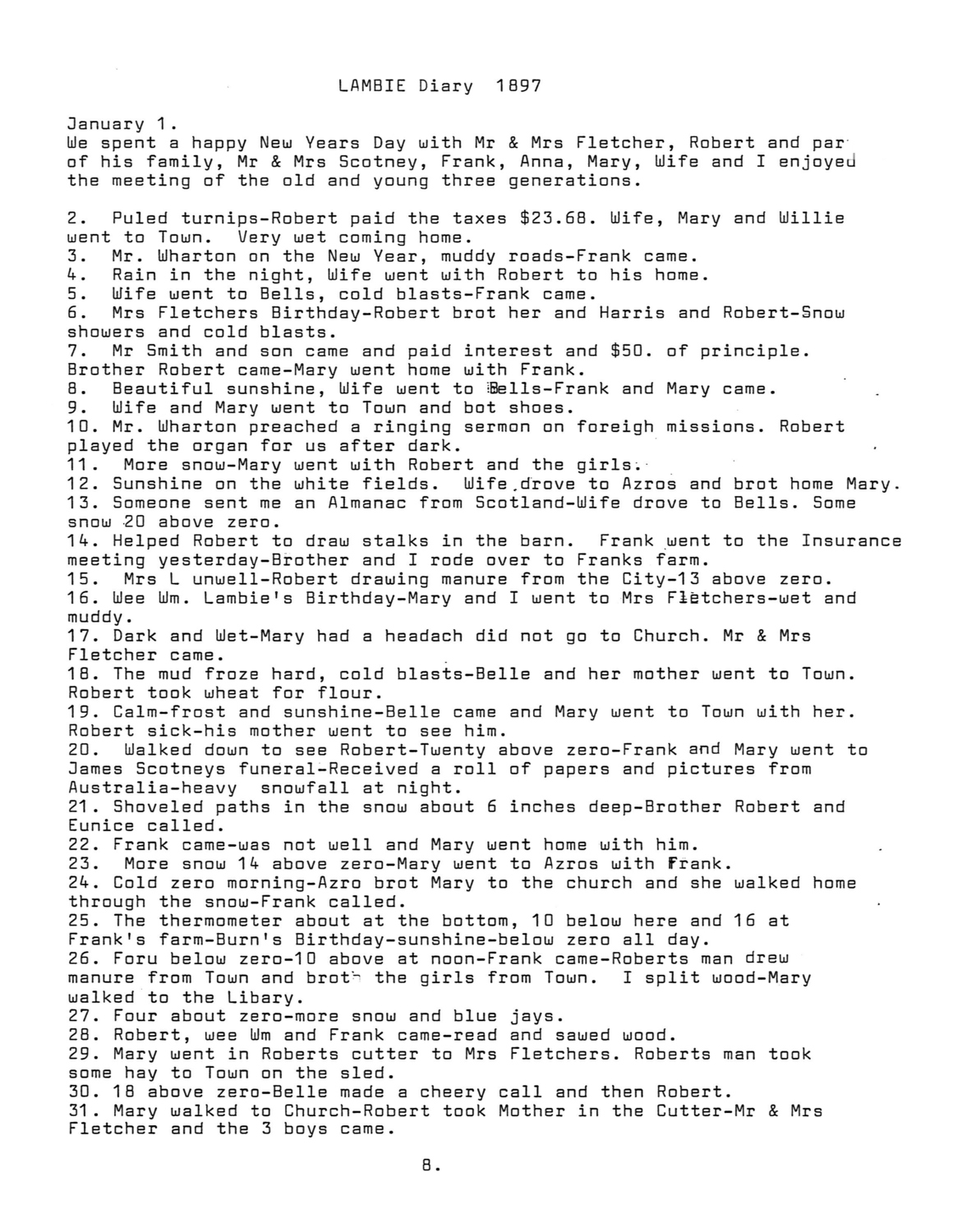 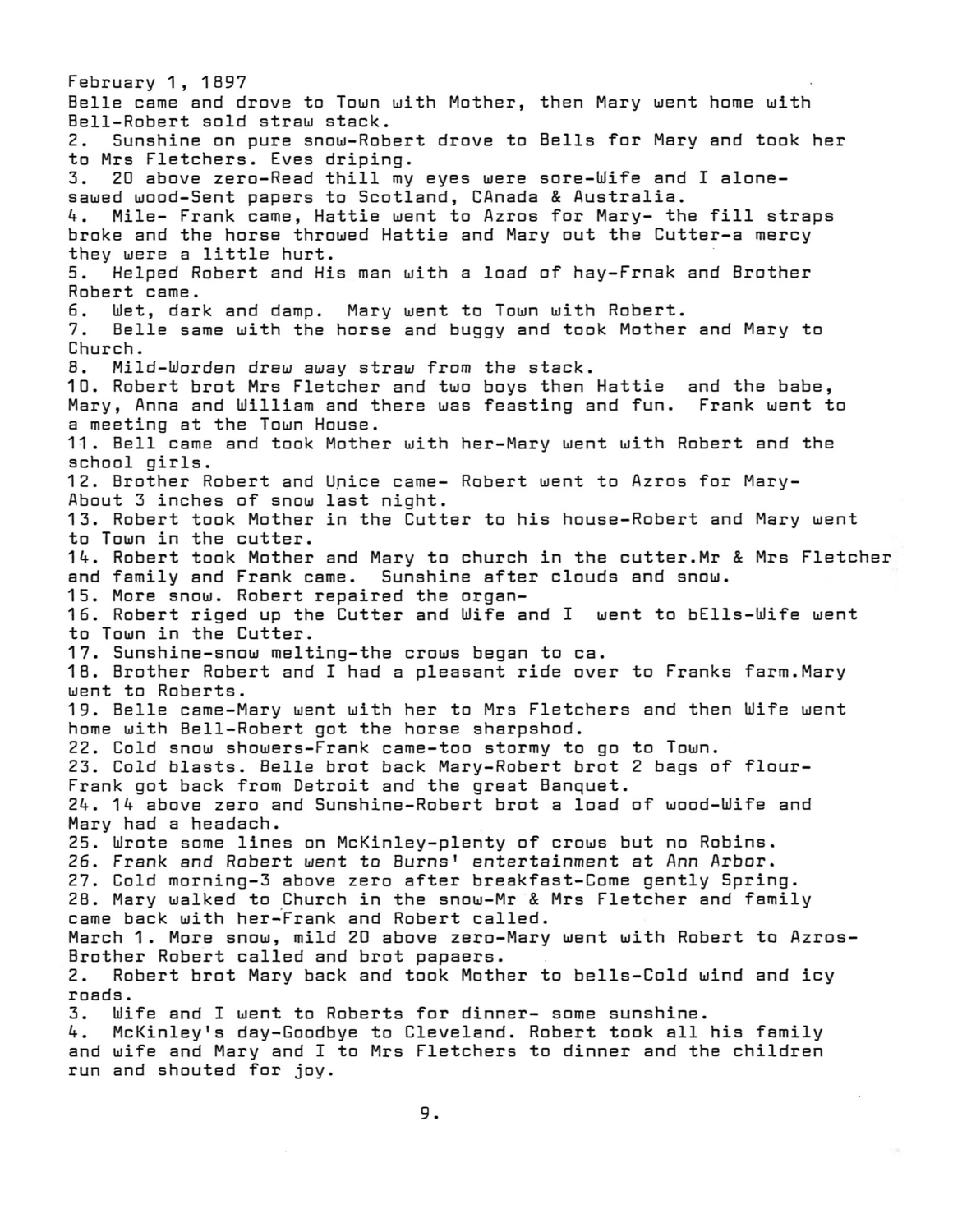 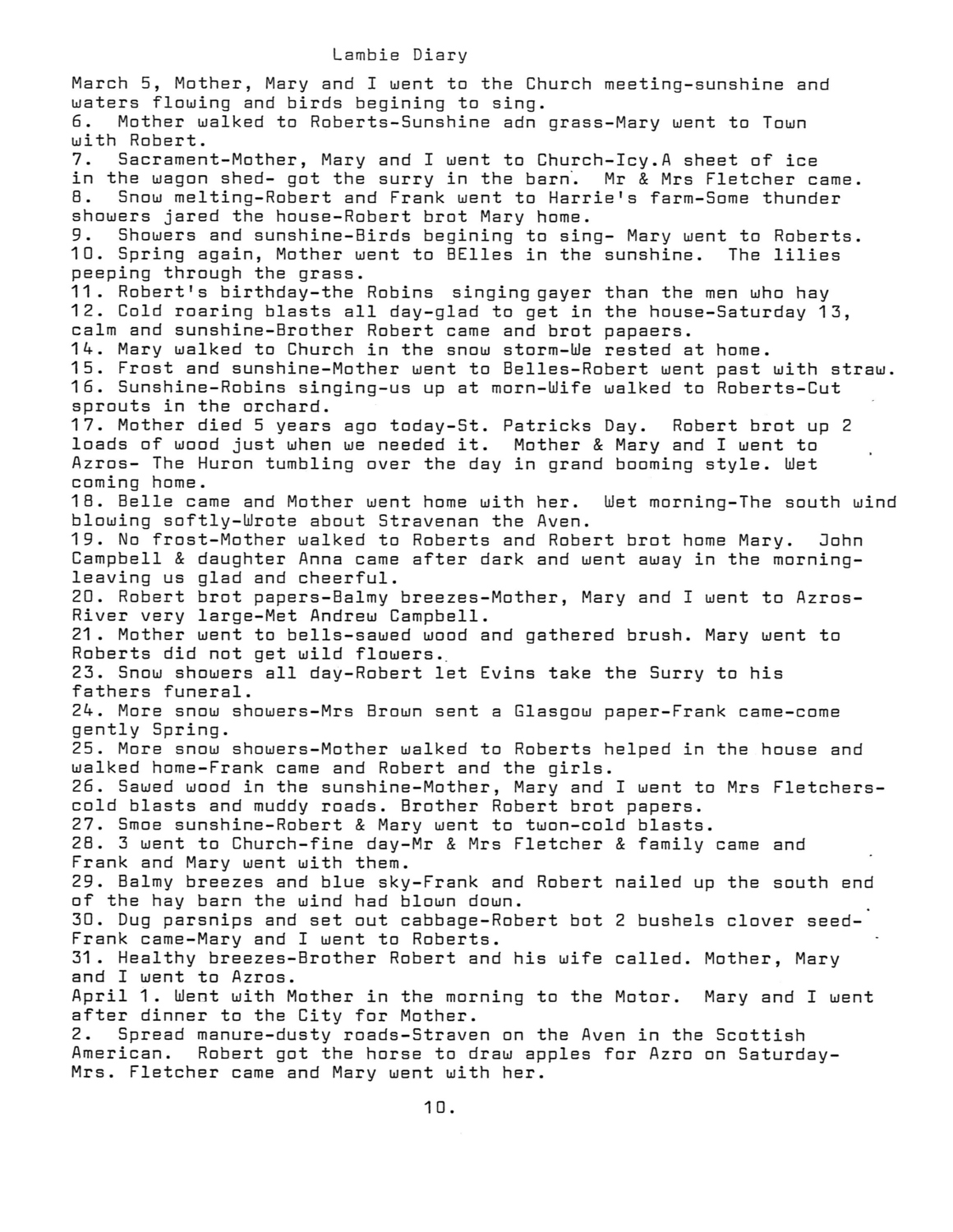 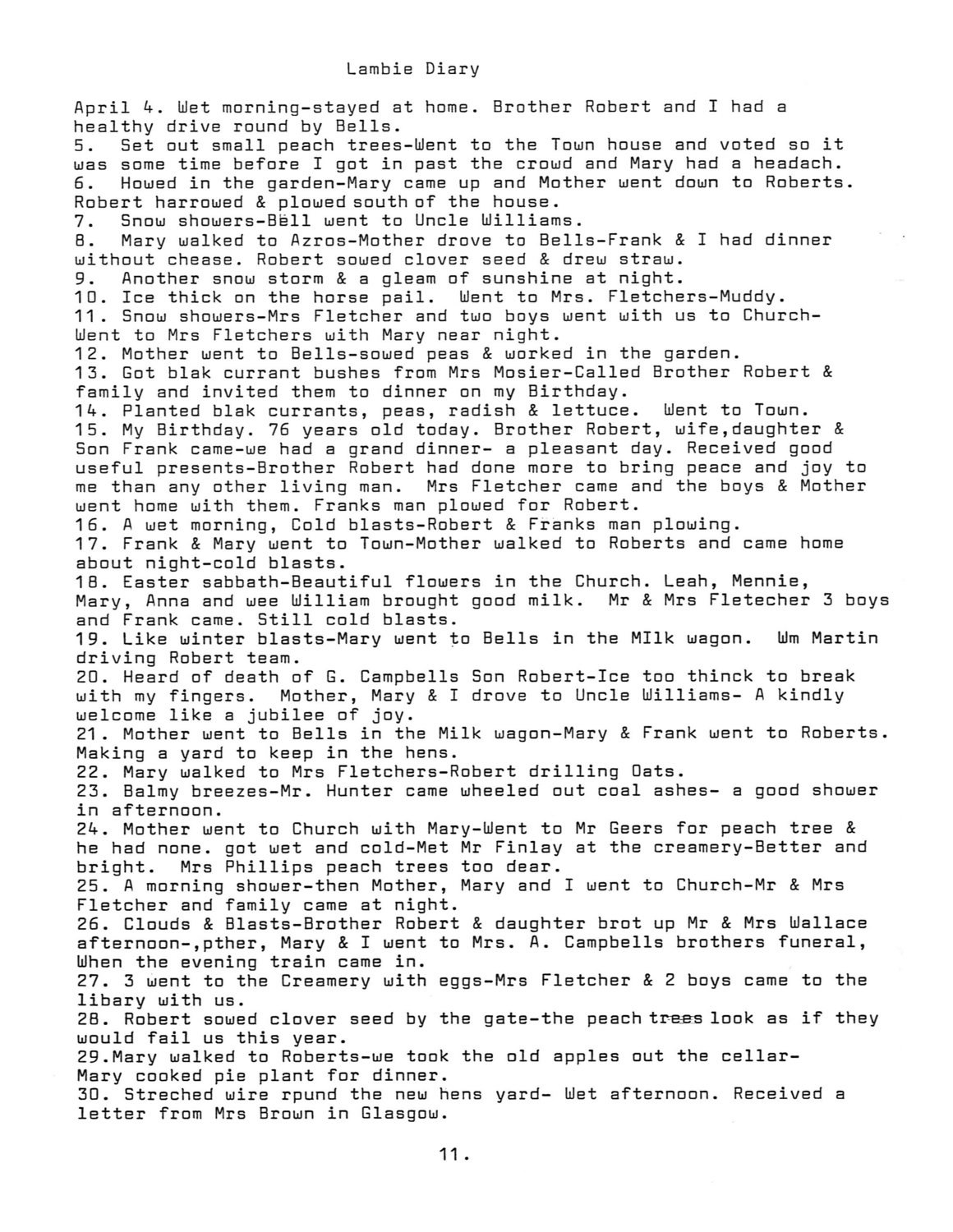 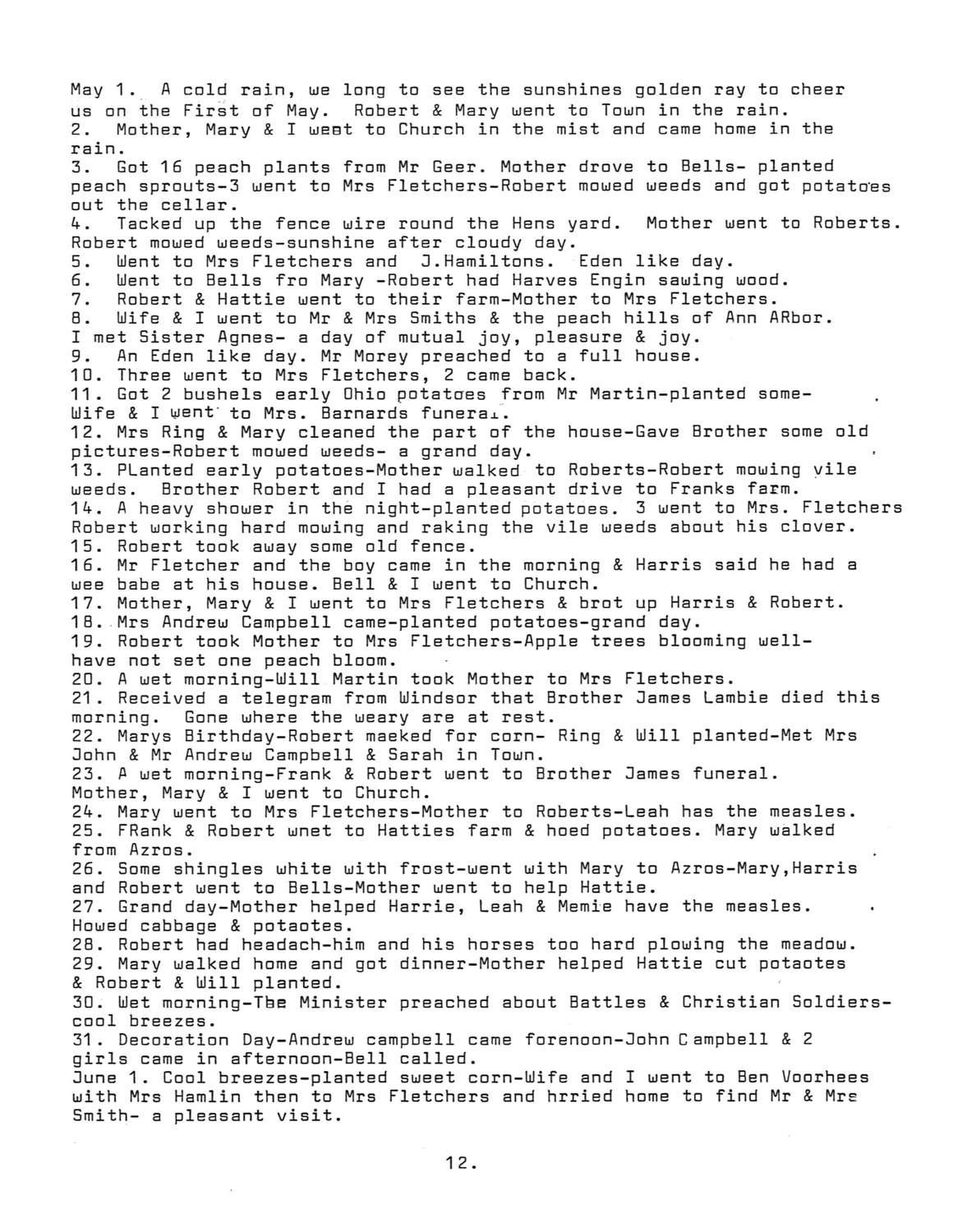 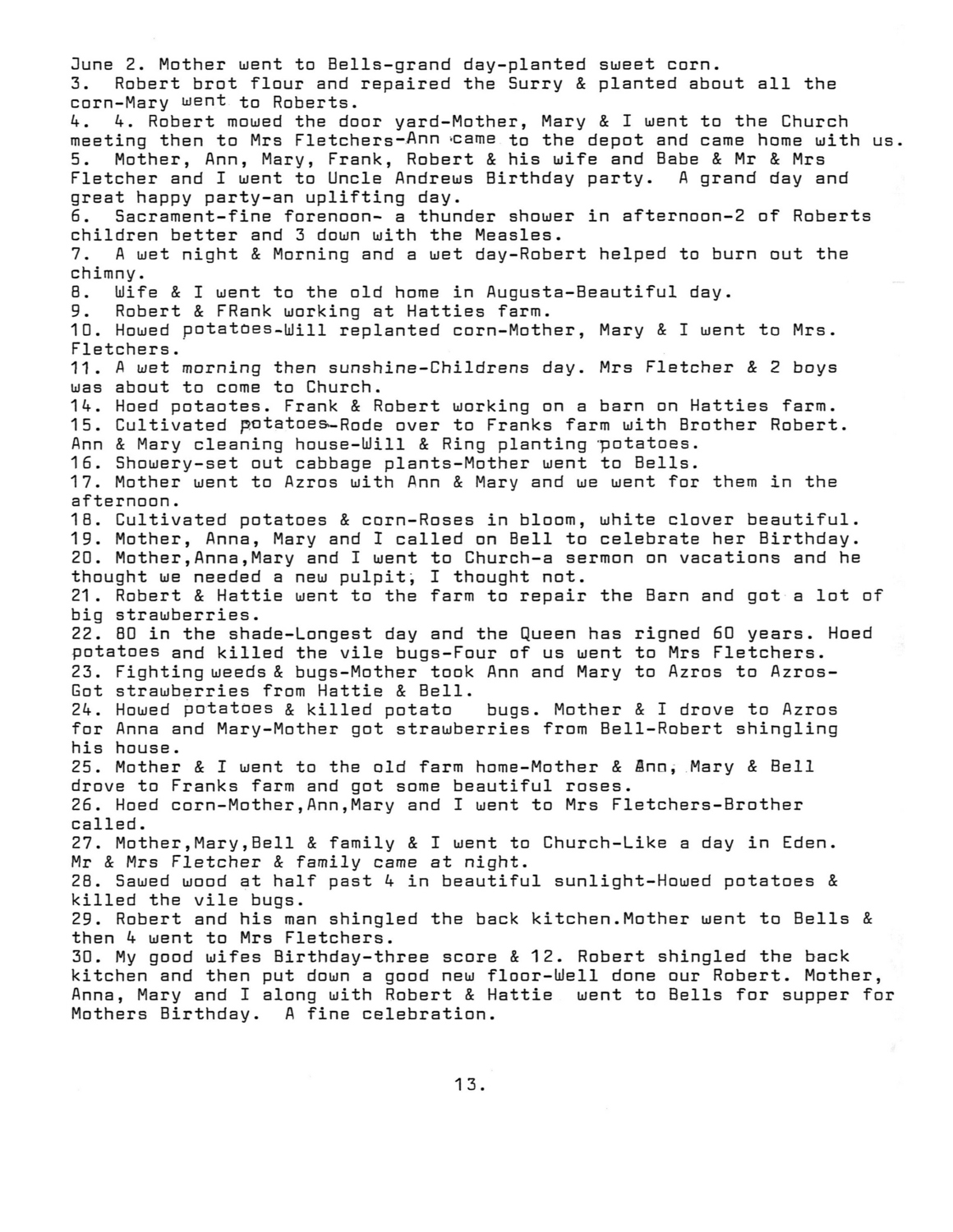 We spent a happy New Years Day with Mr & Mrs Fletcher, Robert and part of his family, Mr & Mrs Scotney, Frank, Anna, Mary, Wife and I enjoyed the meeting of the old and young three generations.

4. Rain in the night, Wife went with Robert to his home.

6. Mrs Fletchers Birthday-Robert brot her and Harris and Robert-Snow showers and cold blasts.

9. Wife and Mary went to Town and bot shoes.

10. Mr. Wharton preached a ringing sermon on foreigh missions. Robert played the organ for us after dark.

11. More snow-Mary went with Robert and the girls.

12. Sunshine on the white fields. Wife drove to Azros and brot home Mary.

13. Someone sent me an Almanac from Scotland-Wife drove to Bells. Some snow 20 above zero.

14. Helped Robert to draw stalks in the barn. Frank went to the Insurance meeting yesterday-Brother and I rode over to Franks farm.

15. Mrs L unwell-Robert drawing manure from the City-13 above zero.

17. Dark and Wet-Mary had a headach did not go to Church. Mr & Mrs Fletcher came.

19. Calm-frost and sunshine-Belle came and Mary went to Town with her. Robert sick-his mother went to see him.

20. Walked down to see Robert-Twenty above zero-Frank and Mary went to James Scotneys funeral-Received a roll of papers and pictures from Australia-heavy snowfall at night.

21. Shoveled paths in the snow about 6 inches deep-Brother Robert and Eunice called.

22. Frank came-was not well and Mary went home with him.

24. Cold zero morning-Azro brot Mary to the church and she walked home through the snow-Frank called.

25. The thermometer about at the bottom, 10 below here and 16 at Frank's farm-Burn's Birthday-sunshine-below zero all day.

26. Foru below zero-10 above at noon-Frank came-Roberts man drew manure from Town and brot the girls from Town. I split wood-Mary walked to the Libary.

29. Mary went in Roberts cutter to Mrs Fletchers. Roberts man took some hay to Town on the sled.

30. 18 above zero-Belle made a cheery call and then Robert.

31. Mary walked to Church-Robert took Mother in the Cutter-Mr & Mrs Fletcher and the 3 boys came.

2. Sunshine on pure snow-Robert drove to Bells for Mary and took her to Mrs Fletchers. Eves driping.

4. Mile-Frank came, Hattie went to Azros for Mary-the fill straps broke and the horse throwed Hattie and Mary out the Cutter-a mercy they were a little hurt.

5. Helped Robert and His man with a load of hay-Frnak and Brother Robert came.

6. Wet, dark and damp. Mary went to Town with Robert.

7. Belle same with the horse and buggy and took Mother and Mary to Church.

8. Mild-Worden drew away straw from the stack.

10. Robert brot Mrs Fletcher and two boys then Hattie and the babe, Mary, Anna and William and there was feasting and fun. Frank went to a meeting at the Town House.

11. Bell came and took Mother with her-Mary went with Robert and the school girls.

13. Robert took Mother and Mary to church in the cutter. Mr & Mrs Fletcher and family and Frank came. Sunshine after clouds and snow.

16. Robert riged up the Cutter and Wife and I went to bElls-Wife went to Town in the Cutter.

18. Brother Robert and I had a pleasant ride over to Franks farm. Mary went to Roberts.

19. Belle came-Mary went with her to Mrs Fletchers and then Wife went home with Bell-Robert got the horse sharpshod.

23. Cold blasts. Belle brot back Mary-Robert brot 2 bags of flour-Frank got back from Detroit and the great Banquet.

24. 14 above zero and Sunshine-Robert brot a load of wood-Wife and Mary had a headach.

25. Wrote some lines on McKinley-plenty of crows but no Robins.

26. Frank and Robert went to Burns' entertainment at Ann Arbor.

28. Mary walked to Church in the snow-Mr & Mrs Fletcher and family came back with her-Frank and Robert called.

2. Robert brot Mary back and took Mother to bells-Cold wind and icy roads.

3. Wife and I went to Roberts for dinner-some sunshine.

4. McKinley's day-Goodbye to Cleveland. Robert took all his family and wife and Mary and I to Mrs Fletchers to dinner and the children run and shouted for joy.

March 5, Mother, Mary and I went to the Church meeting-sunshine and waters flowing and birds begining to sing.

7. Sacrament-Mother, Mary and I went to Church-Icy. A sheet of ice in the wagon shed-got the surry in the barn. Mr & Mrs Fletcher came.

10. Spring again, Mother went to BElles in the sunshine. The lilies peeping through the grass.

11. Robert's birthday-the Robins singing gayer than the men who hay

12. Cold roaring blasts all day-glad to get in the house-Saturday 13, calm and sunshine-Brother Robert came and brot papaers.

14. Mary walked to Church in the snow storm-We rested at home.

15. Frost and sunshine-Mother went to Belles-Robert went past with straw.

17. Mother died 5 years ago today-St. Patricks Day. Robert brot up 2 loads of wood just when we needed it. Mother & Mary and I went to Azros-The Huron tumbling over the day in grand booming style. Wet coming home.

19. No frost-Mother walked to Roberts and Robert brot home Mary. John Campbell & daughter Anna came after dark and went away in the morning-leaving us glad and cheerful.

21. Mother went to bells-sawed wood and gathered brush. Mary went to Roberts did not get wild flowers.

23. Snow showers all day-Robert let Evins take the Surry to his fathers funeral.

25. More snow showers-Mother walked to Roberts helped in the house and walked home-Frank came and Robert and the girls.

26. Sawed wood in the sunshine-Mother, Mary and I went to Mrs Fletchers-cold blasts and muddy roads. Brother Robert brot papers.

28. 3 went to Church-fine day-Mr & Mrs Fletcher & family came and Frank and Mary went with them.

29. Balmy breezes and blue sky-Frank and Robert nailed up the south end of the hay barn the wind had blown down.

30. Dug parsnips and set out cabbage-Robert bot 2 bushels clover seed-Frank came-Mary and I went to Roberts.

31. Healthy breezes-Brother Robert and his wife called. Mother, Mary and I went to Azros.

April 1. Went with Mother in the morning to the Motor. Mary and I went after dinner to the City for Mother.

2. Spread manure-dusty roads-Straven on the Aven in the Scottish American. Robert got the horse to draw apples for Azro on Saturday-Mrs. Fletcher came and Mary went with her.

April 4. Wet morning-stayed at home. Brother Robert and I had a healthy drive round by Bells.

5. Set out small peach trees-Went to the Town house and voted so it was some time before I got in past the crowd and Mary had a headach.

6. Howed in the garden-Mary came up and Mother went down to Roberts. Robert harrowed & plowed south of the house.

9. Another snow storm & a gleam of sunshine at night.

10. Ice thick on the horse pail. Went to Mrs. Fletchers-Muddy.

11. Snow showers-Mrs Fletcher and two boys went with us to Church-Went to Mrs Fletchers with Mary near night.

12. Mother went to Bells-sowed peas & worked in the garden.

13. Got blak currant bushes from Mrs Mosier-Called Brother Robert & family and invited them to dinner on my Birthday.

20. Heard of death of G. Campbells Son Robert-Ice too thinck to break with my fingers. Mother, Mary & I drove to Uncle Williams-A kindly welcome like a jubilee of joy.

21. Mother went to Bells in the Milk wagon-Mary & Frank went to Roberts. Making a yard to keep in the hens.

24. Mother went to Church with Mary-Went to Mr Geers for peach tree & he had none. got wet and cold-Met Mr Finlay at the creamery-Better and bright. Mrs Phillips peach trees too dear.

25. A morning shower-then Mother, Mary and I went to Church-Mr & Mrs Fletcher and family came at night.

27. 3 went to the Creamery with eggs-Mrs Fletcher & 2 boys came to the libary with us.

28. Robert sowed clover seed by the gate-the peach trees look as if they would fail us this year.

29. Mary walked to Roberts-we took the old apples out the cellar-Mary cooked pie plant for dinner.

May 1. A cold rain, we long to see the sunshines golden ray to cheer us on the First of May. Robert & Mary went to Town in the rain.

2. Mother, Mary & I went to Church in the mist and came home in the rain.

3. Got 16 peach plants from Mr Geer. Mother drove to Bells-planted peach sprouts-3 went to Mrs Fletchers-Robert mowed weeds and got potatoes out the cellar.

4. Tacked up the fence wire round the Hens yard. Mother went to Roberts. Robert mowed weeds-sunshine after cloudy day.

5. Went to Mrs Fletchers and J. Hamiltons. Eden like day.

7. Robert & Hattie went to their farm-Mother to Mrs Fletchers.

9. An Eden like day. Mr Morey preached to a full house.

13. PLanted early potatoes-Mother walked to Roberts-Robert mowing vile weeds. Brother Robert and I had a pleasant drive to Franks farm.

14. A heavy shower in the night-planted potatoes. 3 went to Mrs. Fletchers Robert working hard mowing and raking the vile weeds about his clover.

15. Robert took away some old fence.

16. Mr Fletcher and the boy came in the morning & Harris said he had a wee babe at his house. Bell & I went to Church.

21. Received a telegram from Windor that Brother James Lambie died this morning. Gone where the weary are at rest.

24. Mary went to Mrs Fletchers-Mother to Roberts-Leah has the measles.

26. Some shingles white with frost-went with Mary to Azros-Mary, Harris and Robert went to Bells-Mother went to help Hattie.

28. Robert had headach-him and his horses too hard plowing the meadow.

3. Robert brot flour and repaired the Surry & planted about all the corn-Mary went to Roberts.

4. 4. Robert mowed the door yard-Mother, Mary & I went to the Church meeting then to Mrs Fletchers-Ann came to the depot and came home with us.

6. Sacrament-fine forenoon-a thunder shower in afternoon-2 of Roberts children better and 3 down with the Measles.

7. A wet night & Morning and a wet day-Robert helped to burn out the chimny.

8. Wife & I went to the old home in Augusta-Beautiful day.

11. A wet morning then sunshine-Childrens day. Mrs Fletcher & 2 boys was about to come to Church.

17. Mother went to Azros with Ann & Mary and we went for them in the afternoon.

19. Mother, Anna, Mary and I called on Bell to celebrate her Birthday.

20. Mother, Anna, Mary and I went to Church-a sermon on vacations and he thought we needed a new pulpit, I thought not.

21. Robert & Hattie went to the farm to repair the Barn and got a lot of big strawberries.

22. 80 in the shade-Longest day and the Queen has rigned 60 years. Hoed potatoes and killed the vile bugs-Four of us went to Mrs Fletchers.

24. Howed potatoes & killed potato bugs. Mother & I drove to Azros for Anna and Mary-Mother got strawberries from Bell-Robert shingling his house.

25. Mother & I went to the old farm home-Mother & Ann, Mary & Bell drove to Franks farm and got some beautiful roses.

28. Sawed wood at half past 4 in beautiful sunlight-Howed potatoes & killed the vile bugs.

29. Robert and his man shingled the back kitchen. Mother went to Bells & then 4 went to Mrs Fletchers.

30. My good wifes Birthday-three score & 12. Robert shingled the back kitchen and then put down a good new floor-Well done our Robert. Mother, Anna, Mary and I along with Robert & Hattie went to Bells for supper for Mothers Birthday. A fine celebration.