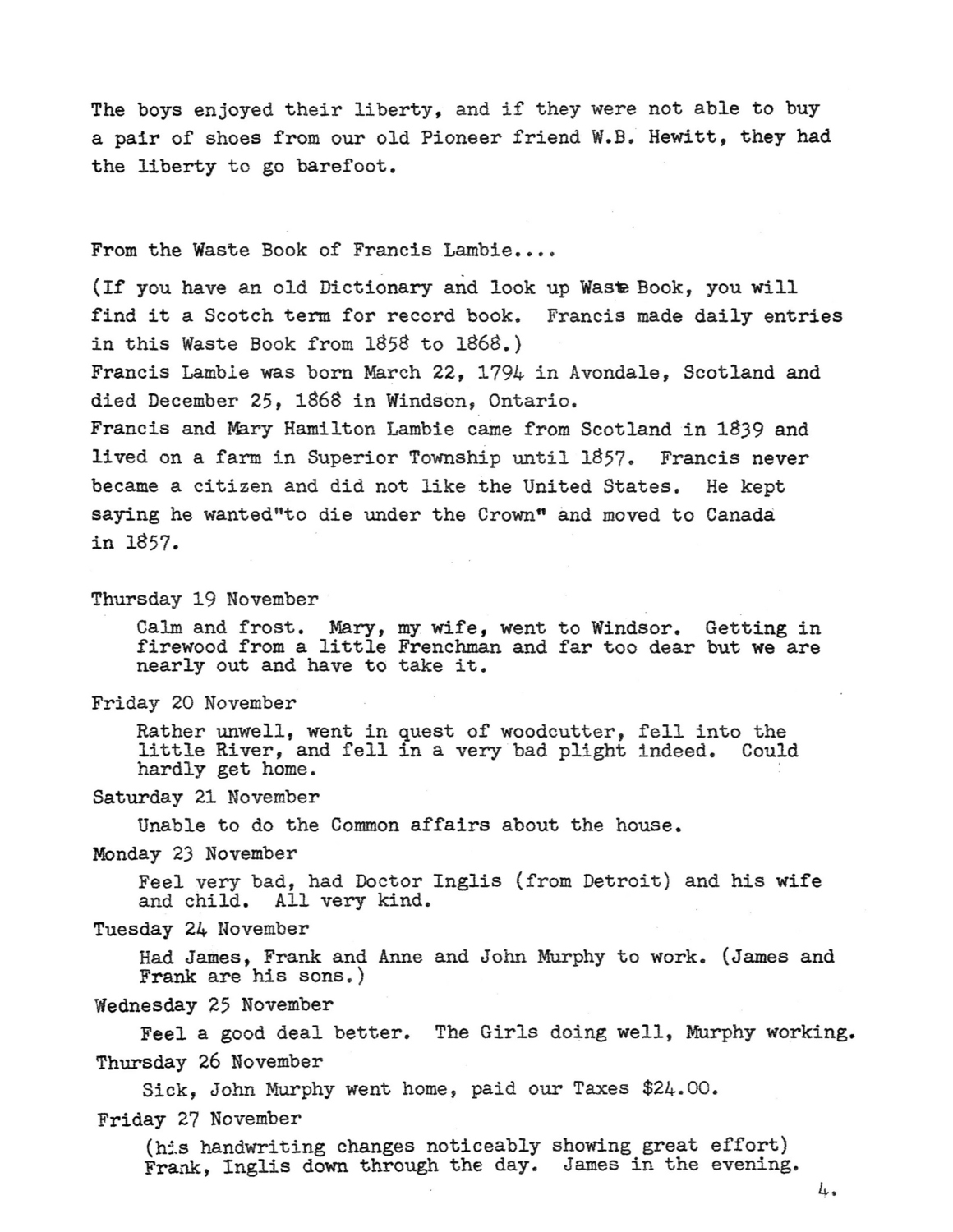 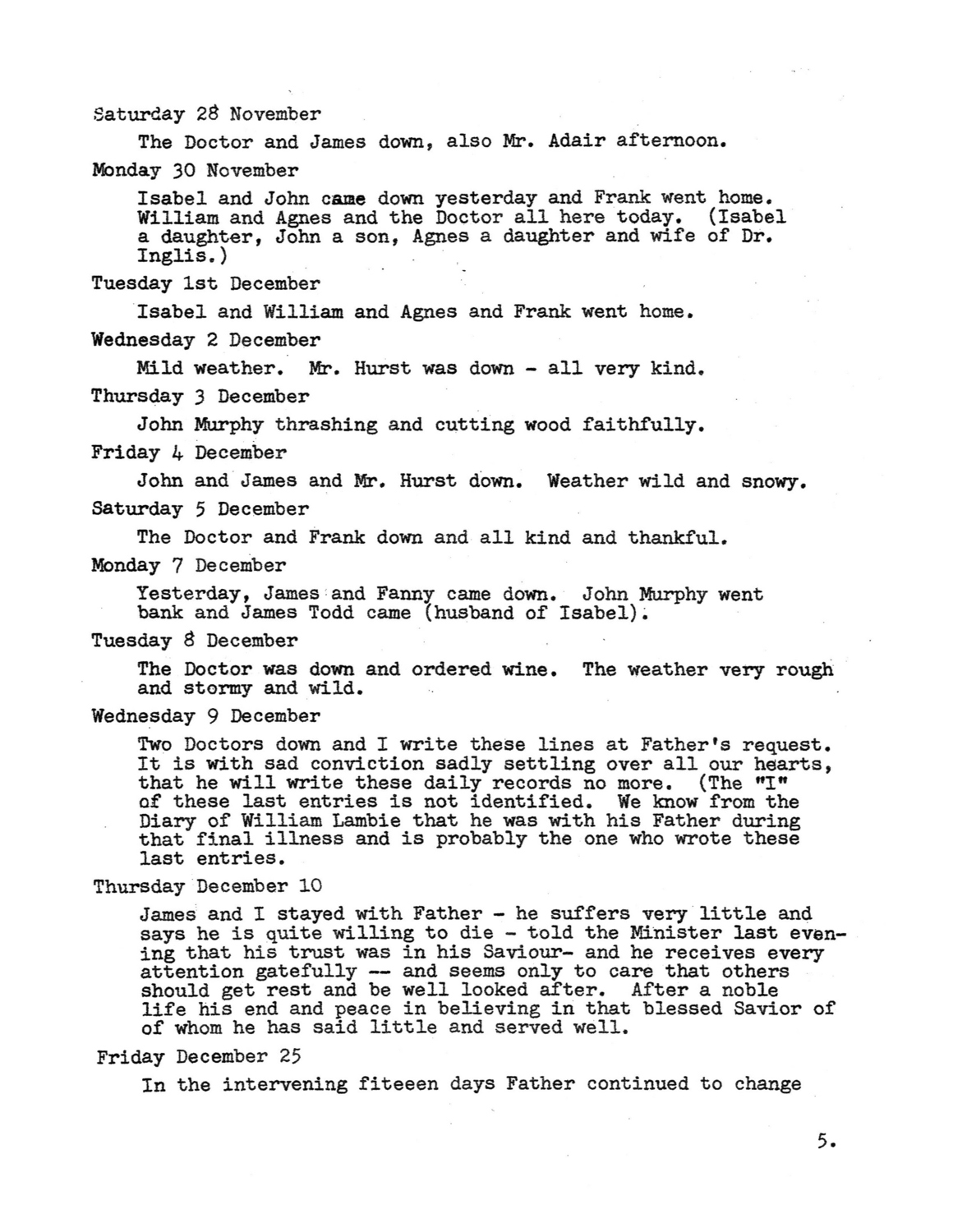 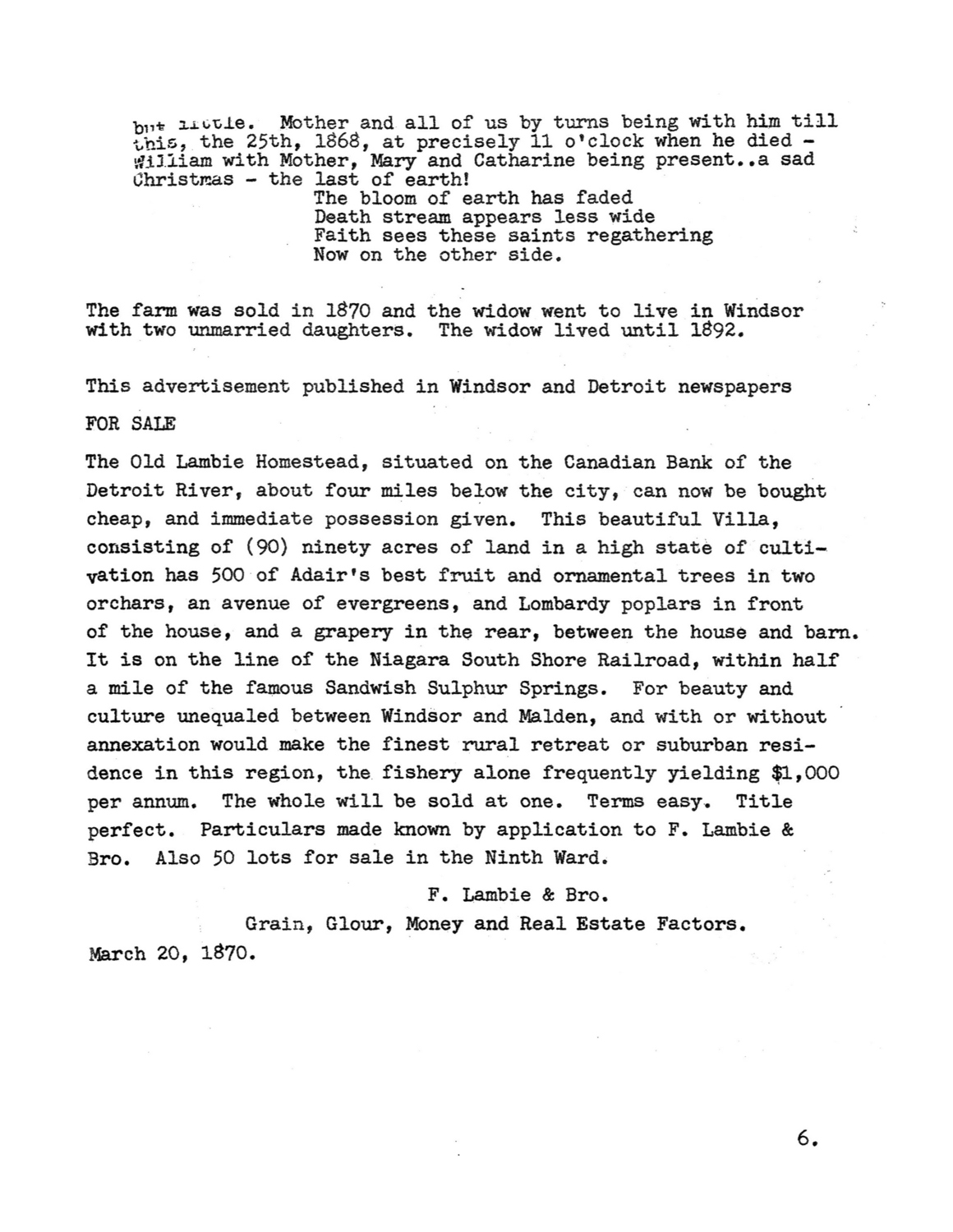 From the Waste Book of Francis Lambie….

(If you have an old Dictionary and look up Waste Book, you will find it a Scotch term for record book. Francis made daily entries in this Waste Book from 1858 to 1868.)

Francis and Mary Hamilton Lambie came from Scotland in 1839 and lived on a farm in Superior Township until 1857. Francis never became a citizen and did not like the United States. He kept saying he wanted “to die under the Crown” and moved to Canada in 1857.

Calm and frost. Mary, my wife, went to Windsor. Getting in firewood from a little Frenchman and far too dear but we are nearly out and have to take it.

Rather unwell, went in quest of woodcutter, fell into the little River, and fell in a very bad plight indeed. Could hardly get home.

Unable to do the Common affairs about the house.

Feel very bad, had Doctor Inglis (from Detroit) and his wife and child. All very kind.

Had James, Frank and Anne and John Murphy to work. (James and Frank are his sons.)

(his handwriting changes noticeably showing great effort) Frank, Inglis down through the day. James in the evening.

The Doctor and James down, also Mr. Adair afternoon.

Isabel and John came down yesterday and Frank went home. William and Agnes and the Doctor all here today. (Isabel a daughter, John a son, Agnes a daughter and wife of Dr. Inglis.)

Isabel and William and Agnes and Frank went home.

John and James and Mr. Hurst down. Weather wild and snowy.

The Doctor and Frank down and all kind and thankful.

The Doctor was down and ordered wine. The weather very rough and stormy and wild.

Two Doctors down and I write these lines at Father's request. It is with sad conviction sadly settling over all our hearts, that he will write these daily records no more. (The “I” of these last entries is not identified. We know from the Diary of William Lambie that he was with his Father during that final illness and is probably the one who wrote these last entries.

James and I stayed with Father--he suffers very little and says he is quite willing to die--told the Minister last evening that his trust was in his Saviour--and he receives every attention gratefully—-and seems only to care that others should get rest and be well looked after. After a noble life his end and peace in believing in that blessed Savior of of whom he has said little and served well.

In the intervening fifteen days Father continued to change but little. Mother and all of us by turns being with him till this, the 25th, 1868, at precisely 11 o'clock when he died--William with Mother, Mary and Catharine being present…a sad Christmas--the last of earth!

The bloom of earth has faded

Now on the other side.

The farm was sold in 1870 and the widow went to live in Windsor with two unmarried daughters. The widow lived until 1892.

This advertisement published in Windsor and Detroit newspapers

The Old Lambie Homestead, situated on the Canadian Bank of the Detroit River, about four miles below the city, can now be bought cheap, and immediate possession given. This beautiful Villa, consisting of (90) ninety acres of land in a high state of cultivation has 500 of Adair's best fruit and ornamental trees in two orchards, an avenue of evergreens, and Lombardy poplars in front of the house, and a grapery in the rear, between the house and barn. It is on the line of the Niagara South Shore Railroad, within half a mile of the famous Sandwich Sulphur Springs. For beauty and culture unequaled between Windsor and Malden, and with or without annexation would make the finest rural retreat or suburban residence in this region, the fishery alone frequently yielding &dollar;1,000 per annum. The whole will be sold at one. Terms easy. Title perfect. Particulars made known by application to F. Lambie & Bro. Also 50 lots for sale in the Ninth Ward.