Notes from the Administration Committee 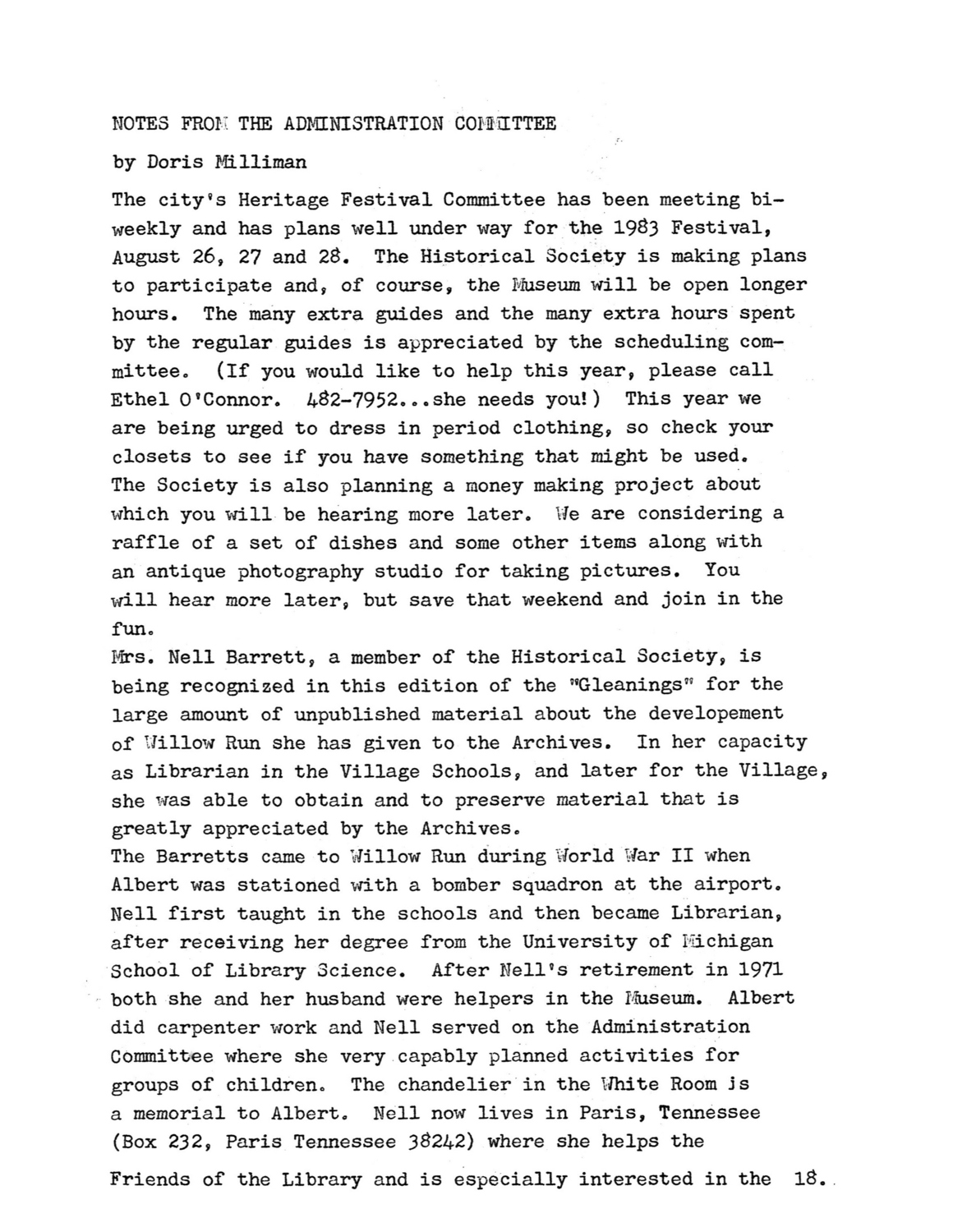 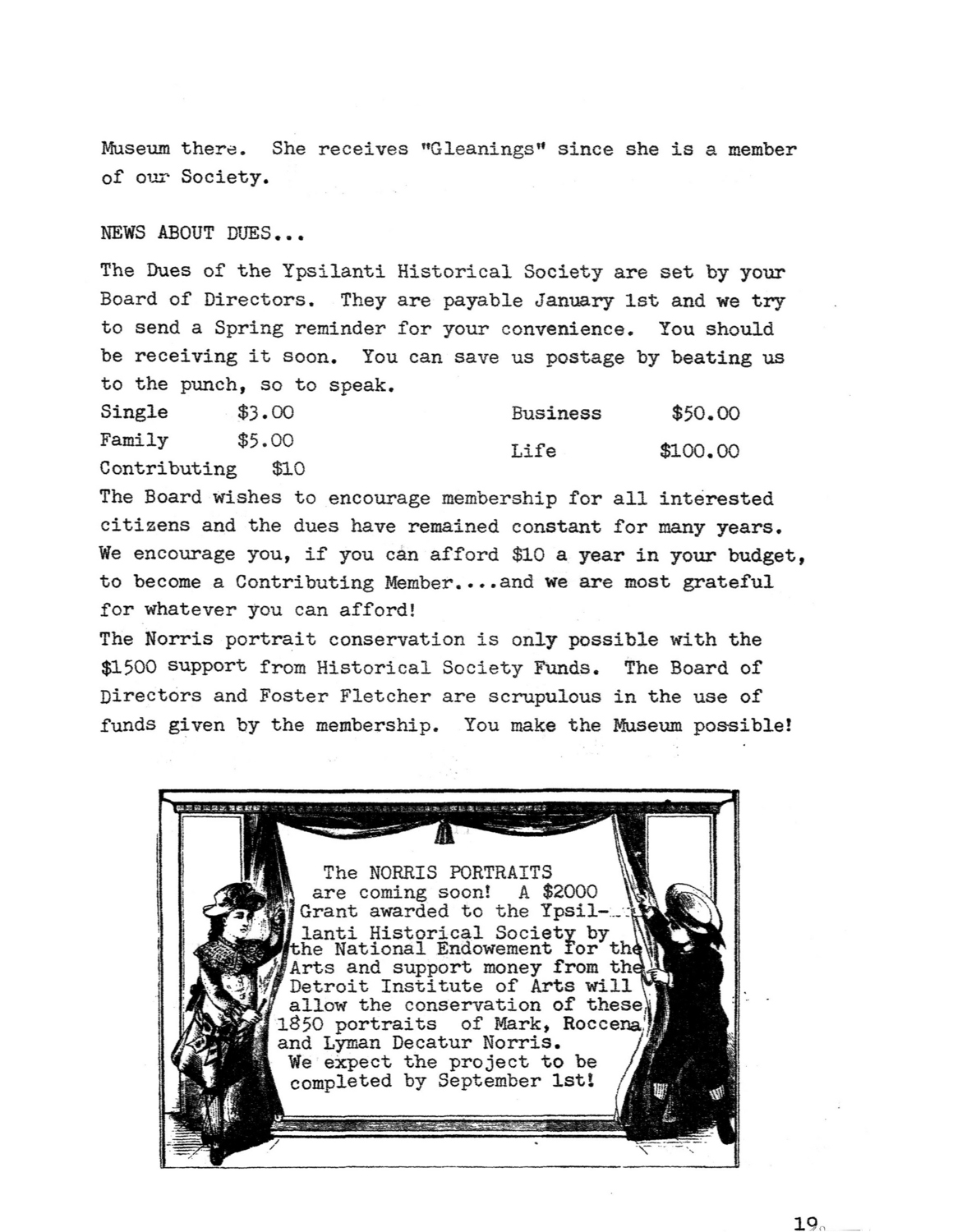 The city's Heritage Festival Committee has been meeting bi-weekly and has plans well under way for the 1983 Festival, August 26, 27 and 28. The Historical Society is making plans to participate and, of course, the Museum will be open longer hours. The many extra guides and the many extra hours spent by the regular guides is appreciated by the scheduling committee. (If you would like to help this year, please call Ethel O'Connor. 482—7952… she needs you!) This year we are being urged to dress in period clothing, so check your closets to see if you have something that might be used. The Society is also planning a money making project about which you will be hearing more later. We are considering a raffle of a set of dishes and some other items along with an antique photography studio for taking pictures. You will hear more later, but save that weekend and join in the fun.

Mrs. Nell Barrett, a member of the Historical Society, is being recognized in this edition of the “Gleanings” for the large amount of unpublished material about the development of Willow Run she has given to the Archives. In her capacity as Librarian in the Village Schools, and later for the Village, she was able to obtain and to preserve material that is greatly appreciated by the Archives.

The Barretts came to Willow Run during World War II when Albert was stationed with a bomber squadron at the airport. Nell first taught in the schools and then became Librarian, after receiving her degree from the University of Michigan School of Library Science. After Nell's retirement in 1971 both she and her husband were helpers in the Museum. Albert did carpenter work and Nell served on the Administration Committee where she very capably planned activities for groups of children. The chandelier in the White Room is a memorial to Albert. Nell now lives in Paris, Tennessee (Box 232, Paris Tennessee 38242) where she helps the Friends of the Library and is especially interested in the Museum there. She receives “Gleanings” since she is a member of our Society.

The Dues of the Ypsilanti Historical Society are set by your Board of Directors. They are payable January 1st and we try to send a Spring reminder for your convenience. You should be receiving it soon. You can save us postage by beating us to the punch, so to speak.

Single $3.00
Business $50.00
Family $5.00
Life $100.00
Contributing $10
The Board wishes to encourage membership for all interested citizens and the dues have remained constant for many years. We encourage you, if you can afford $10 a year in your budget, to become a Contributing Member…. and we are most grateful for whatever you can afford!

The Norris portrait conservation is only possible with the $1500 support from Historical Society Funds. The Board of Directors and Foster Fletcher are scrupulous in the use of funds given by the membership. You make the Museum possible!

The Norris Portraits
are coming soon! A $2000 Grant awarded to the Ypsilanti Historical Society by the National Endowment for the Arts and support money from the Detroit Institute of Arts will allow the conservation of these 1850 portraits of Mark, Roccena and Lyman Decatur Norris. We expect the project to be completed by September 1st!