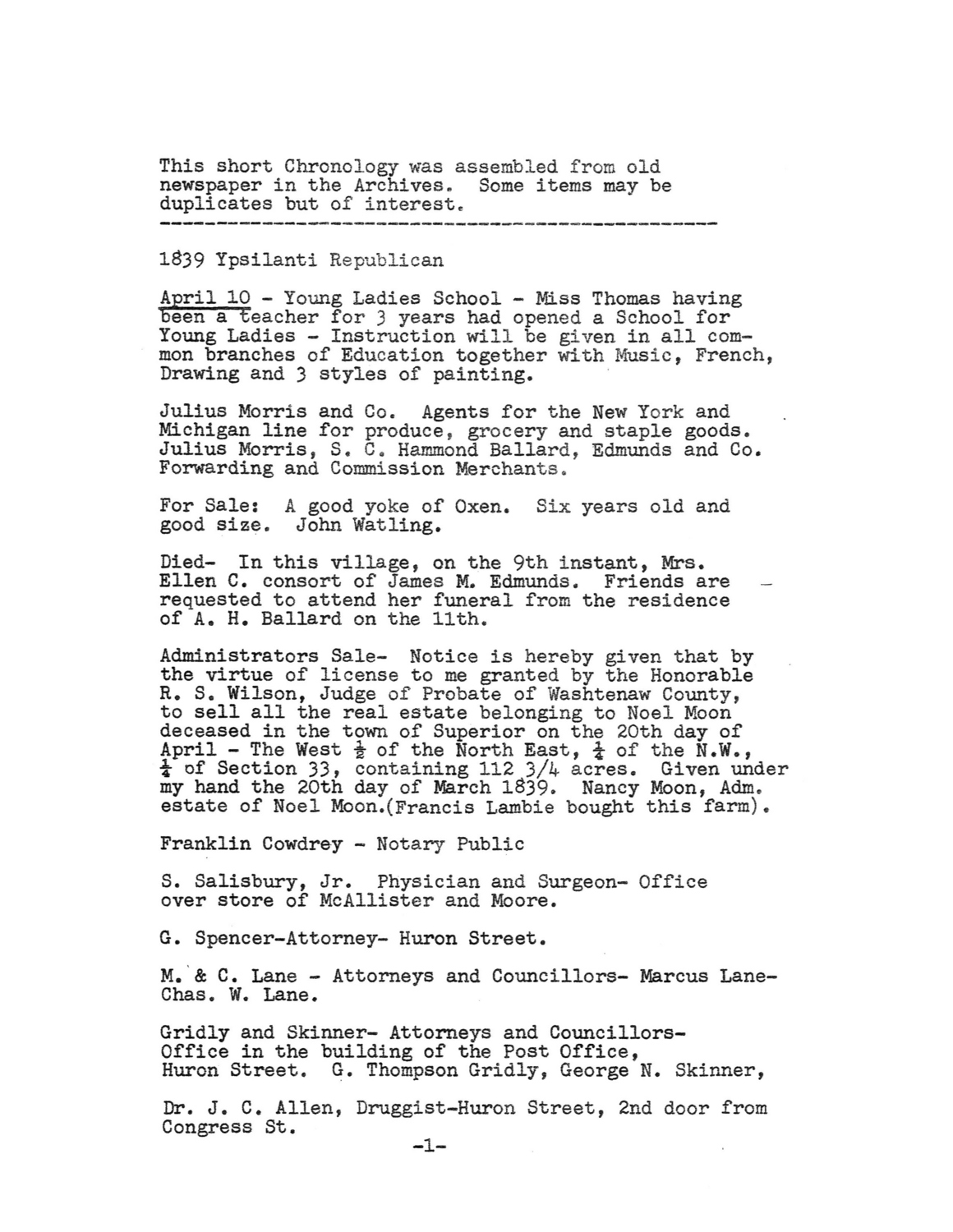 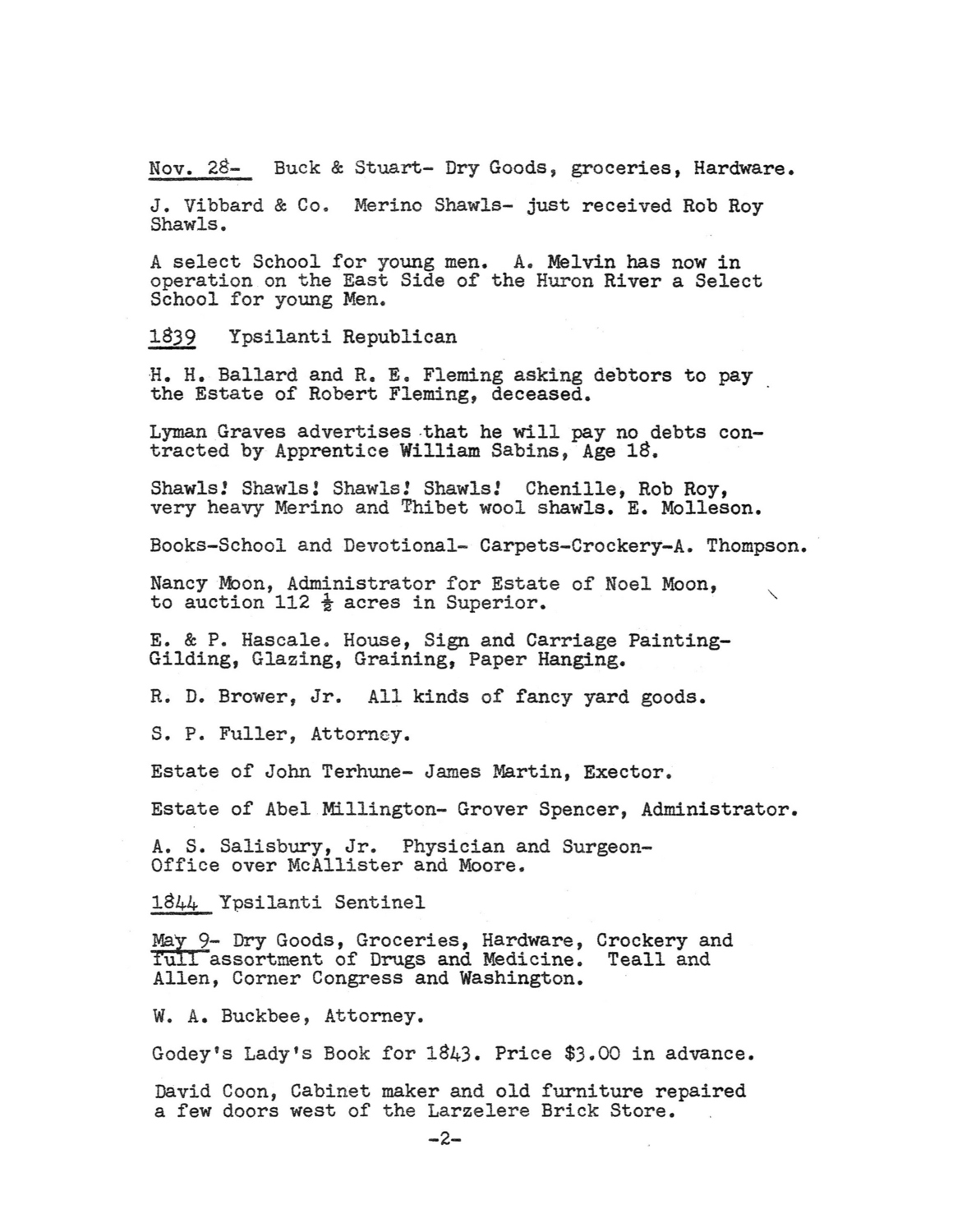 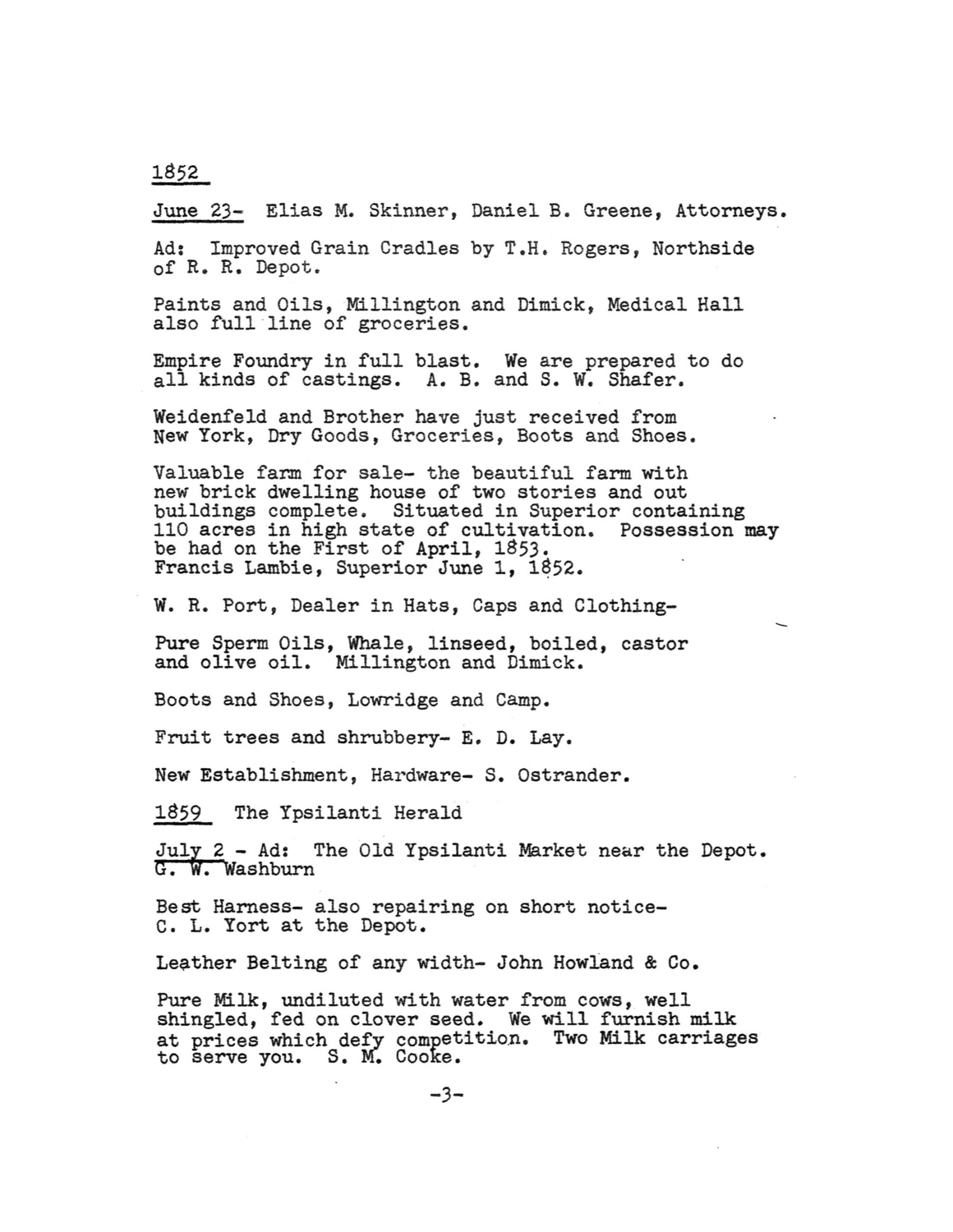 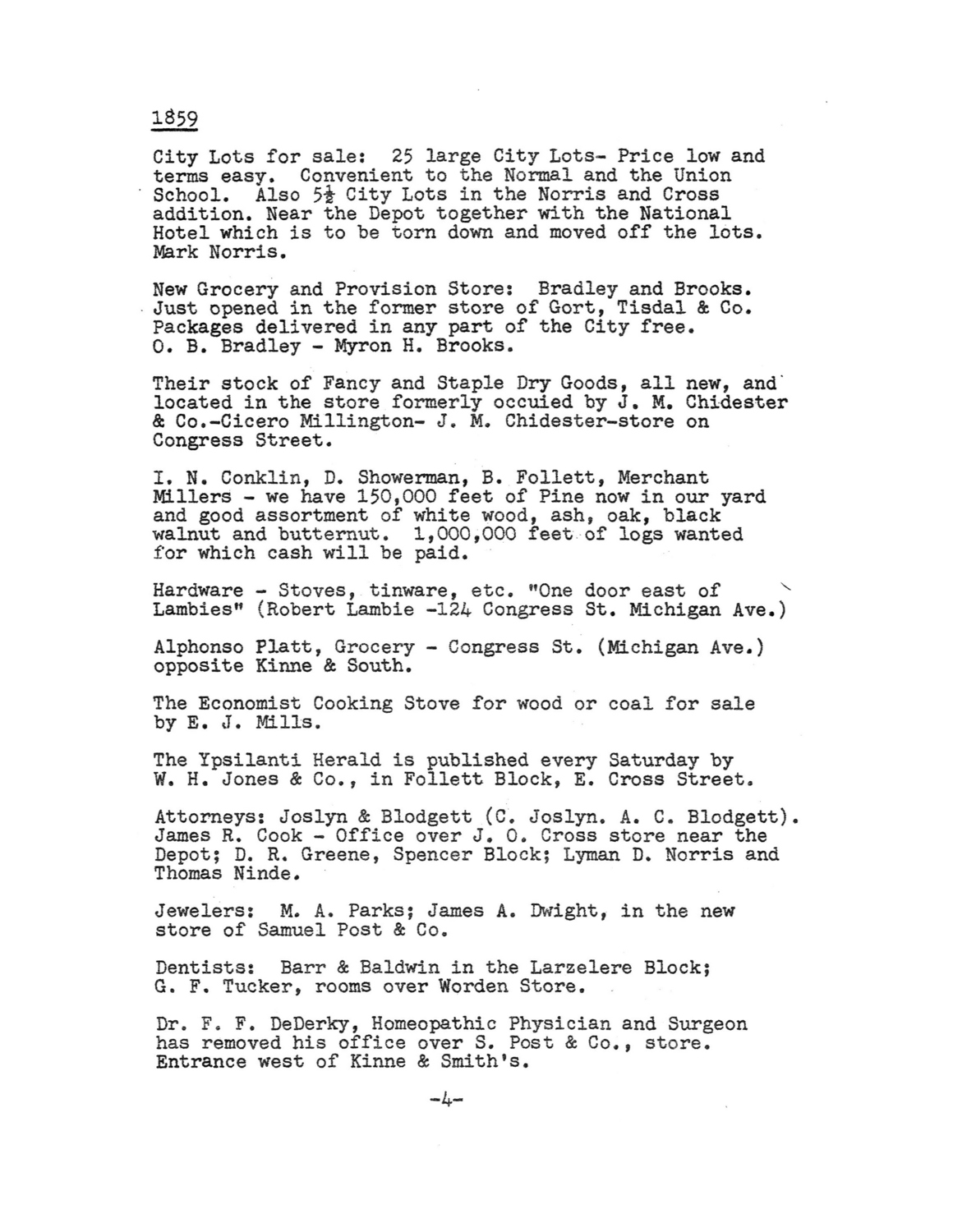 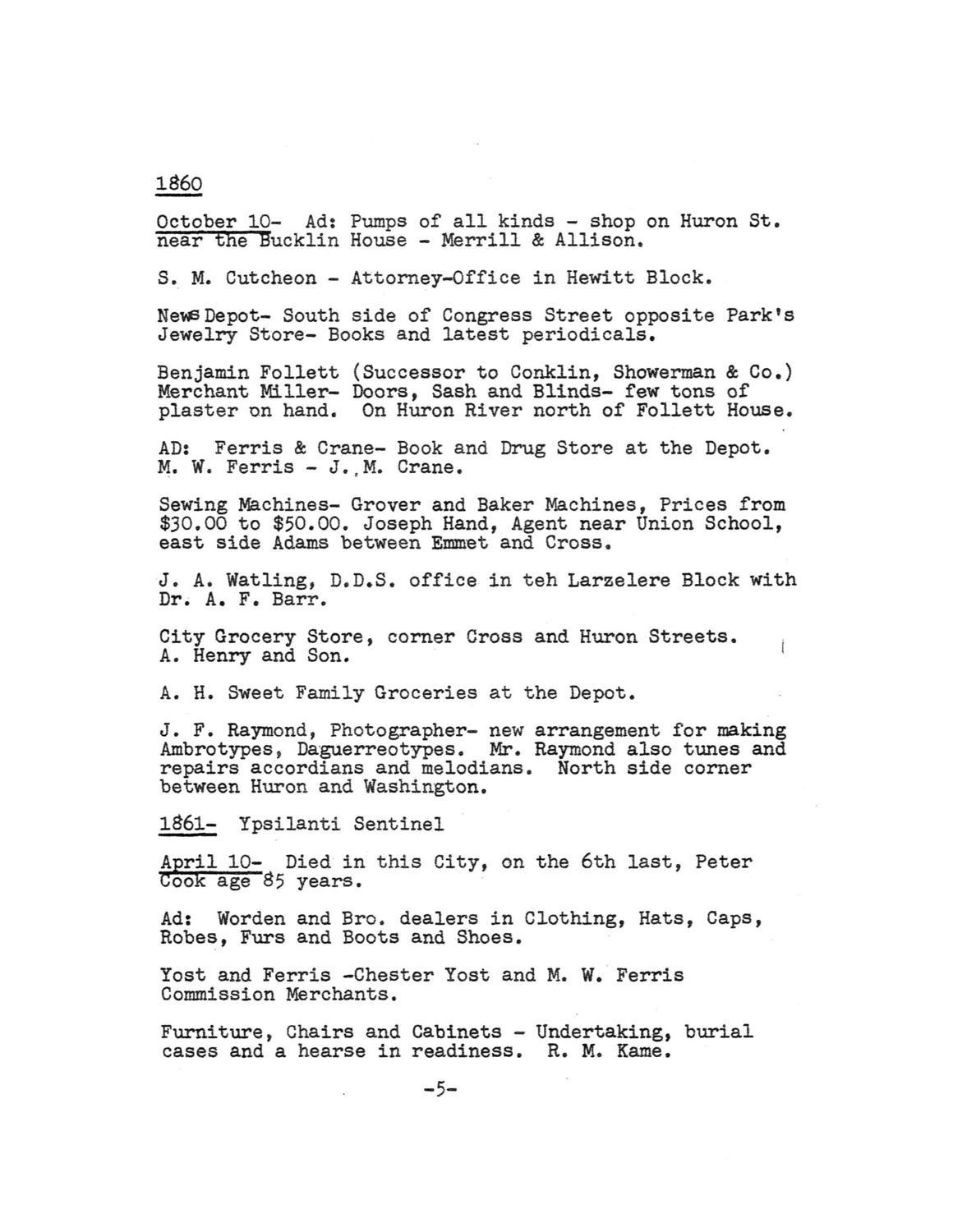 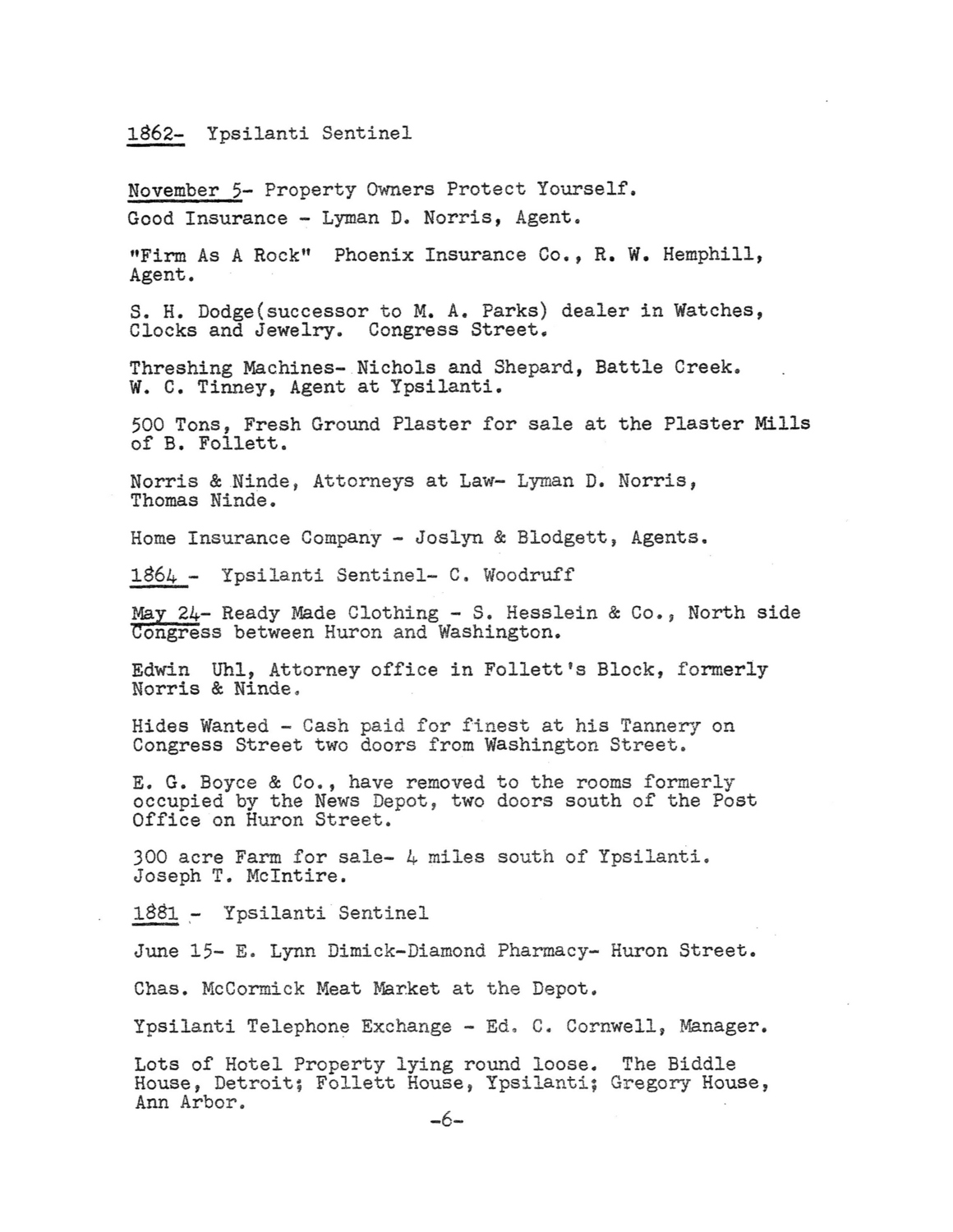 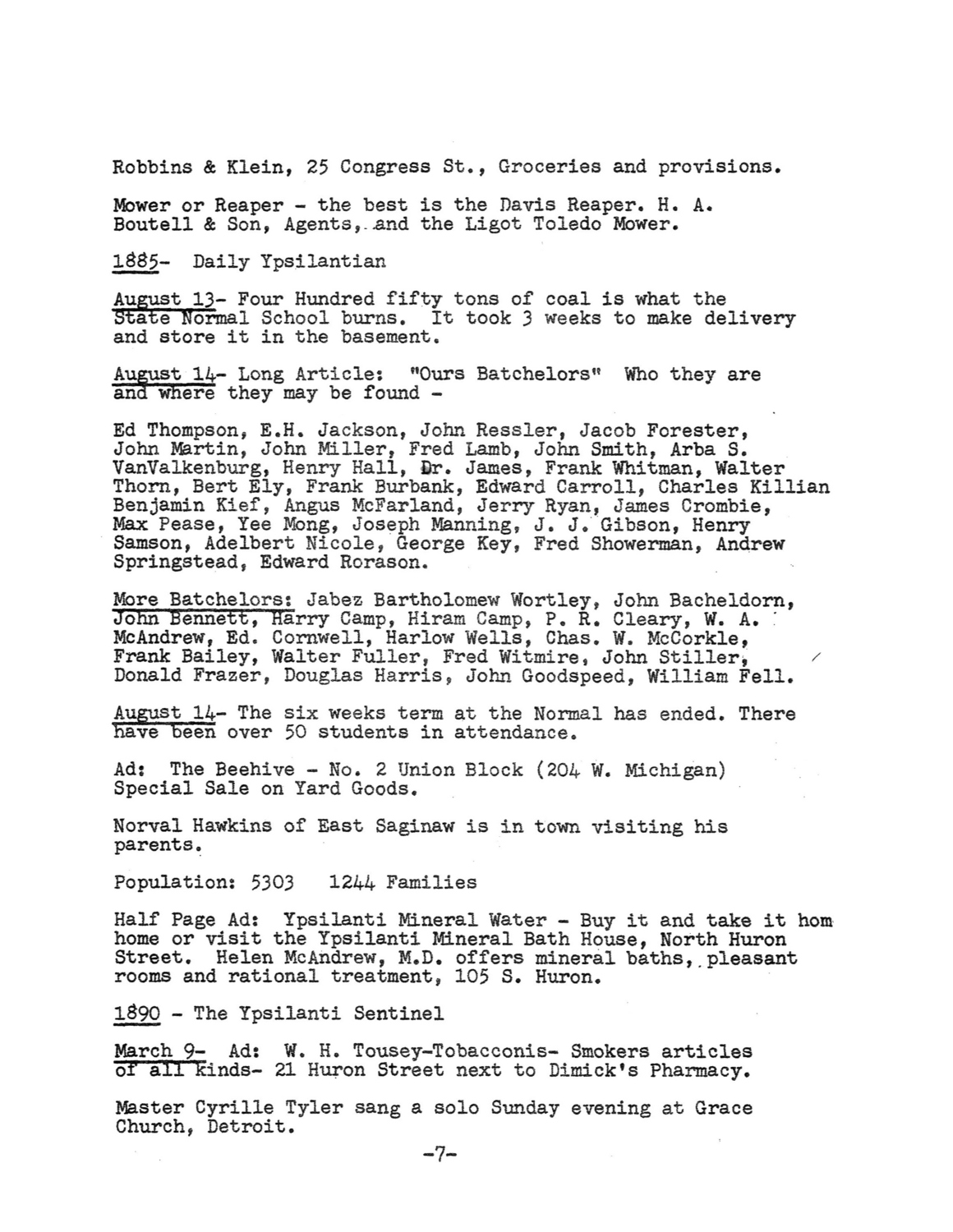 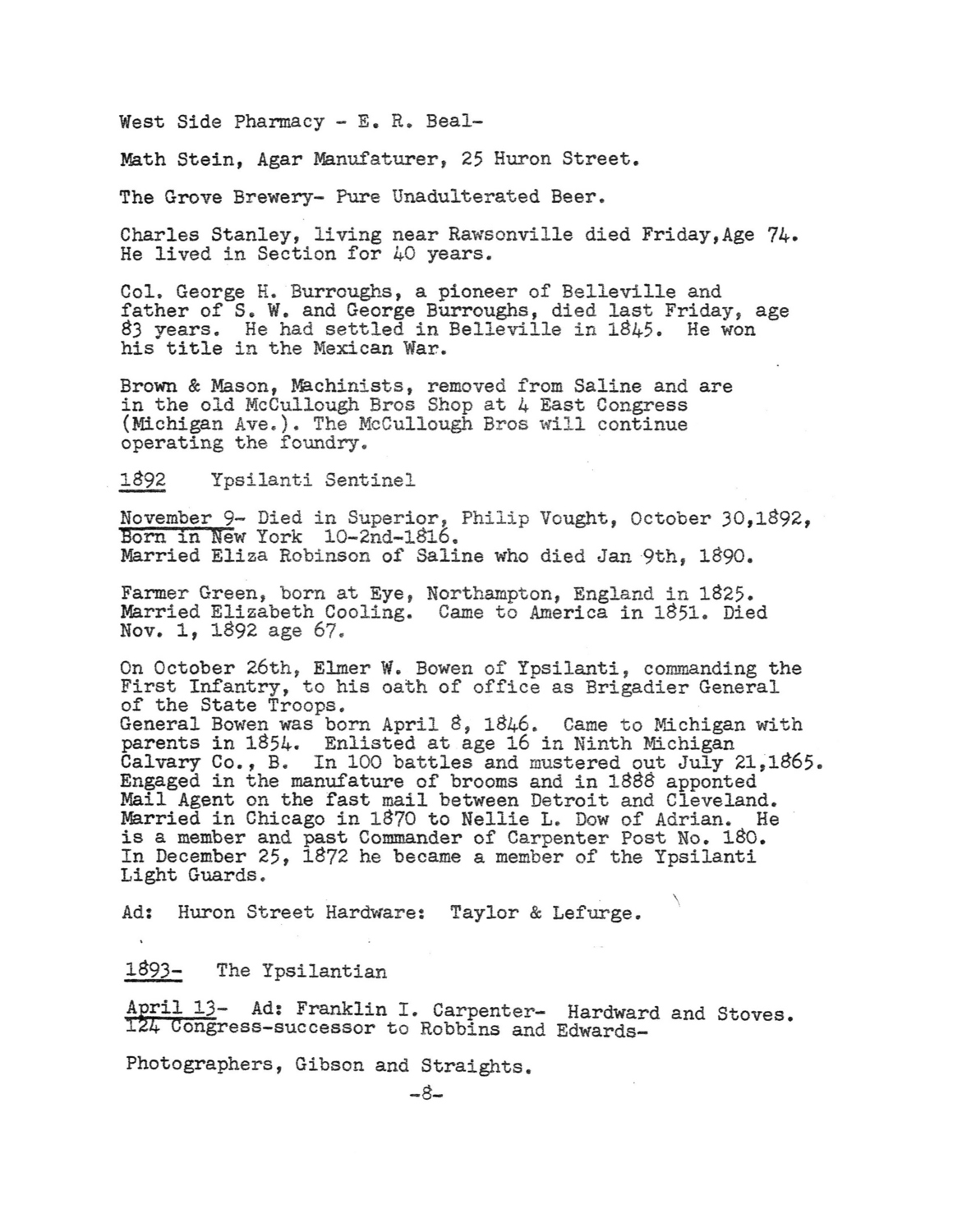 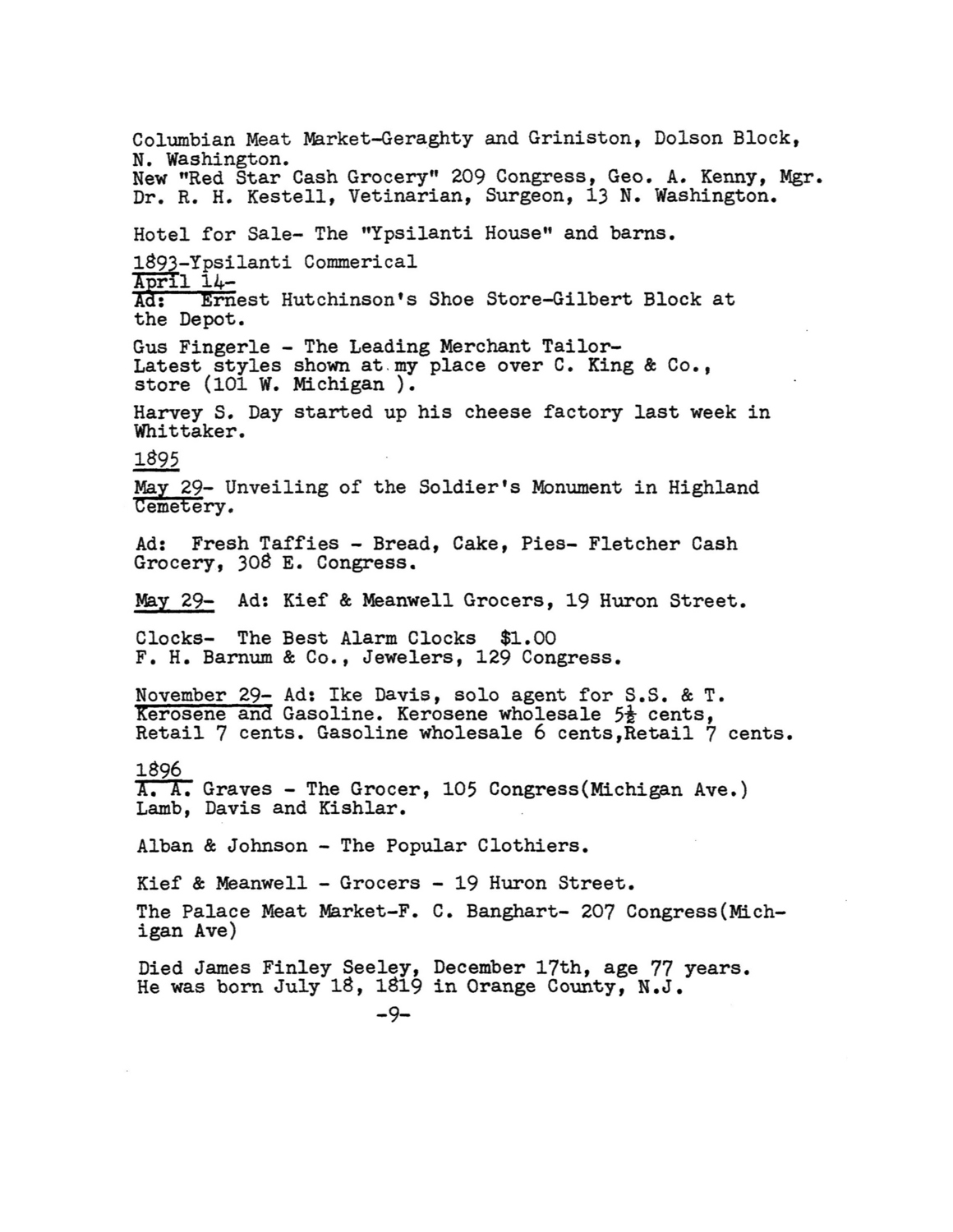 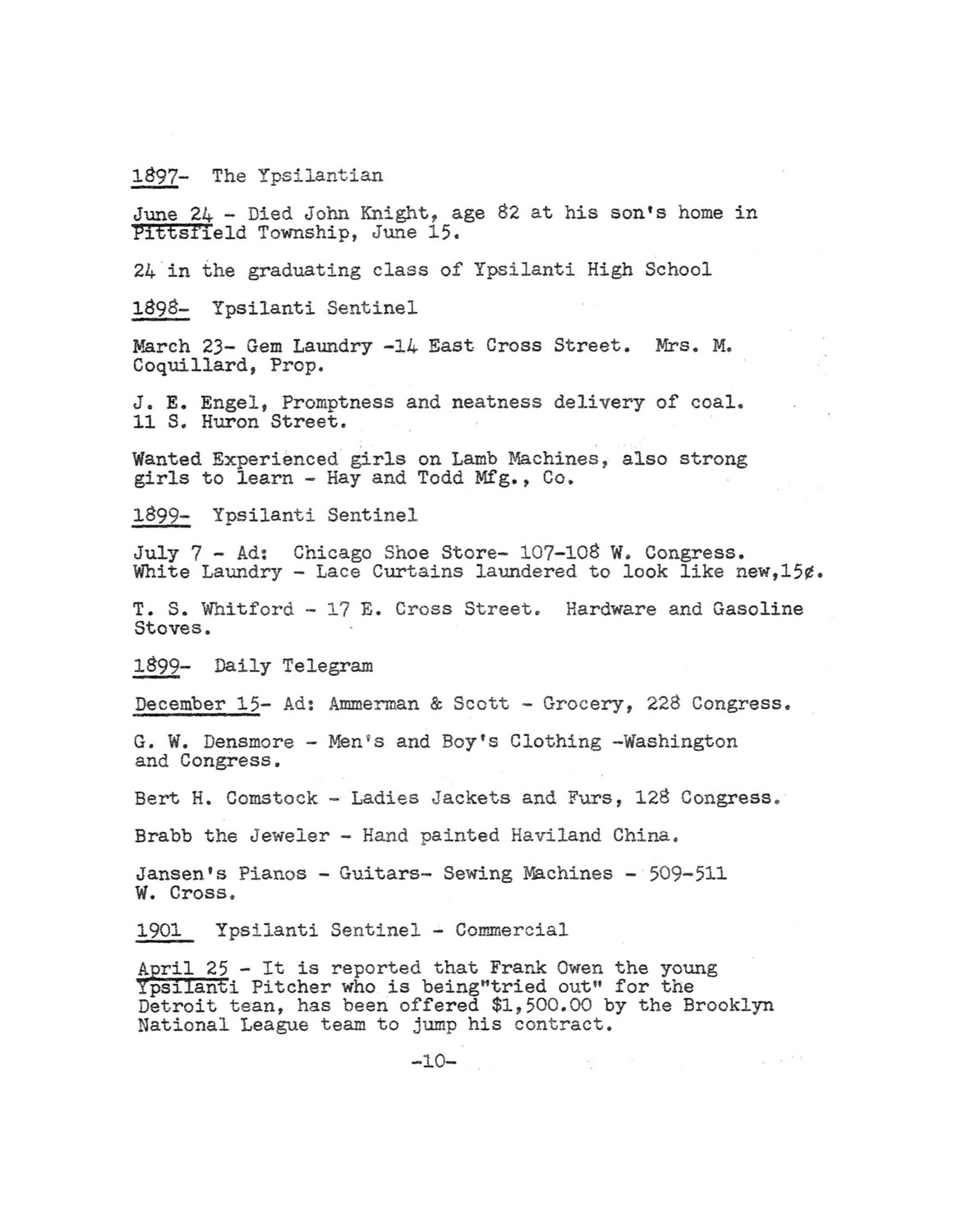 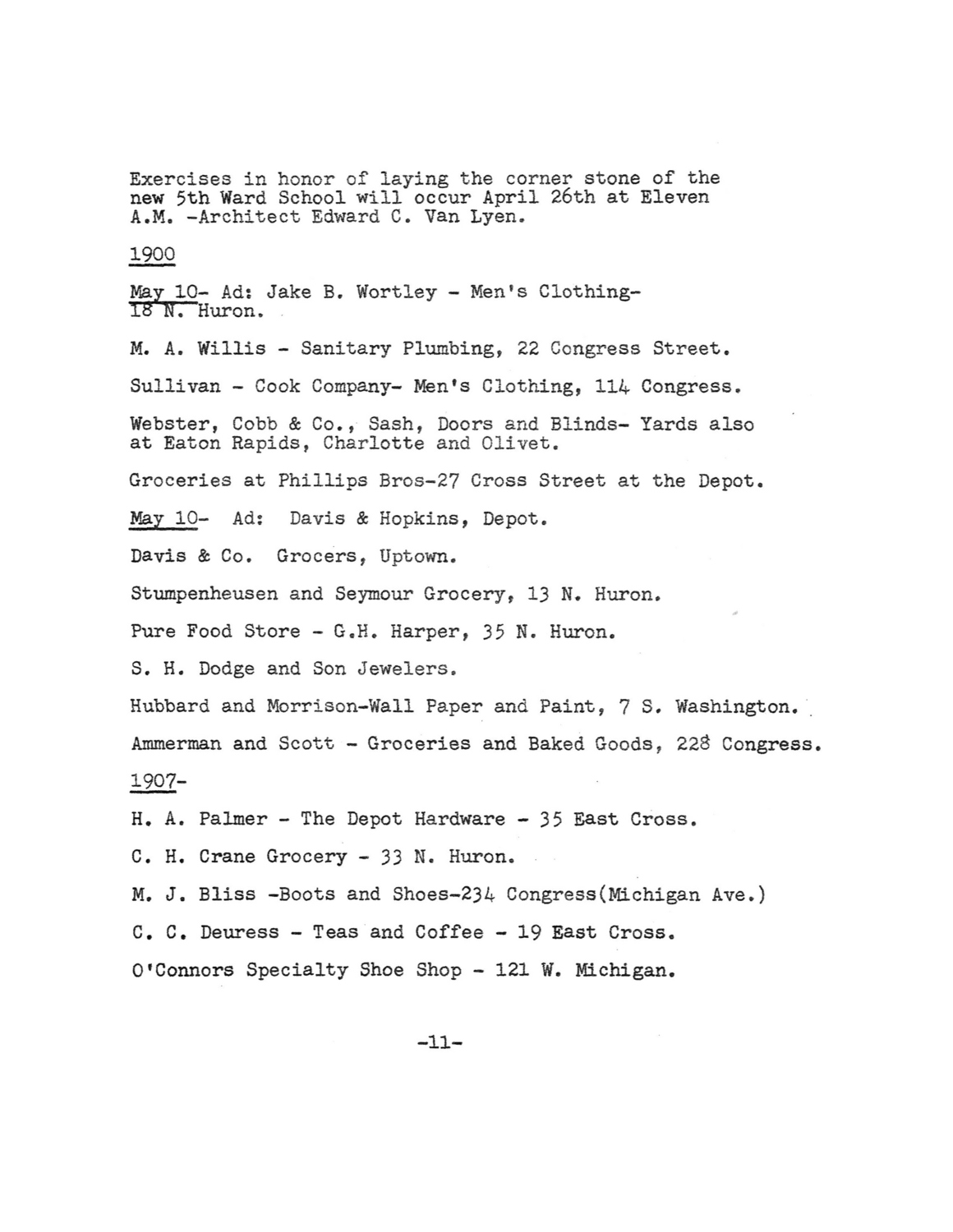 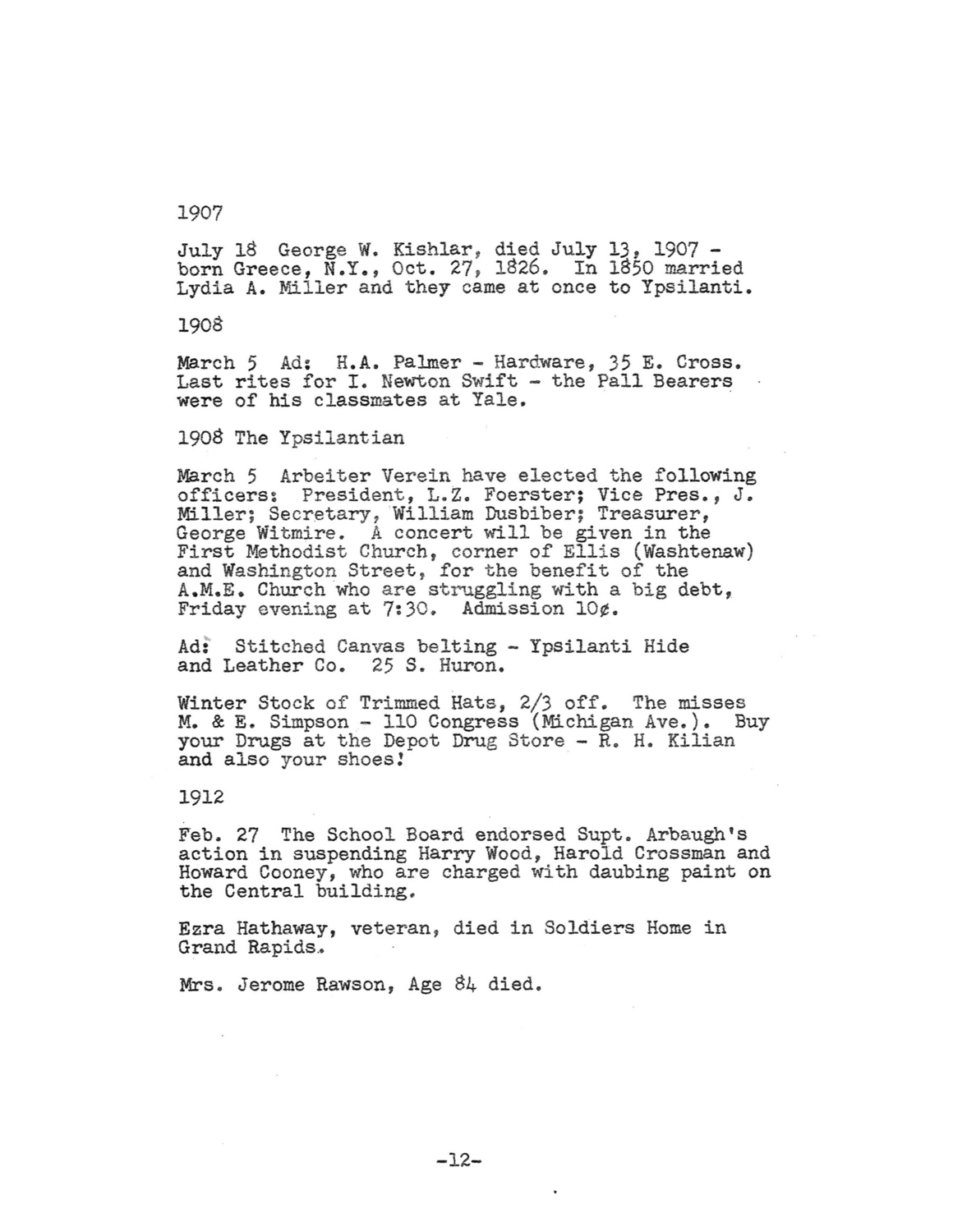 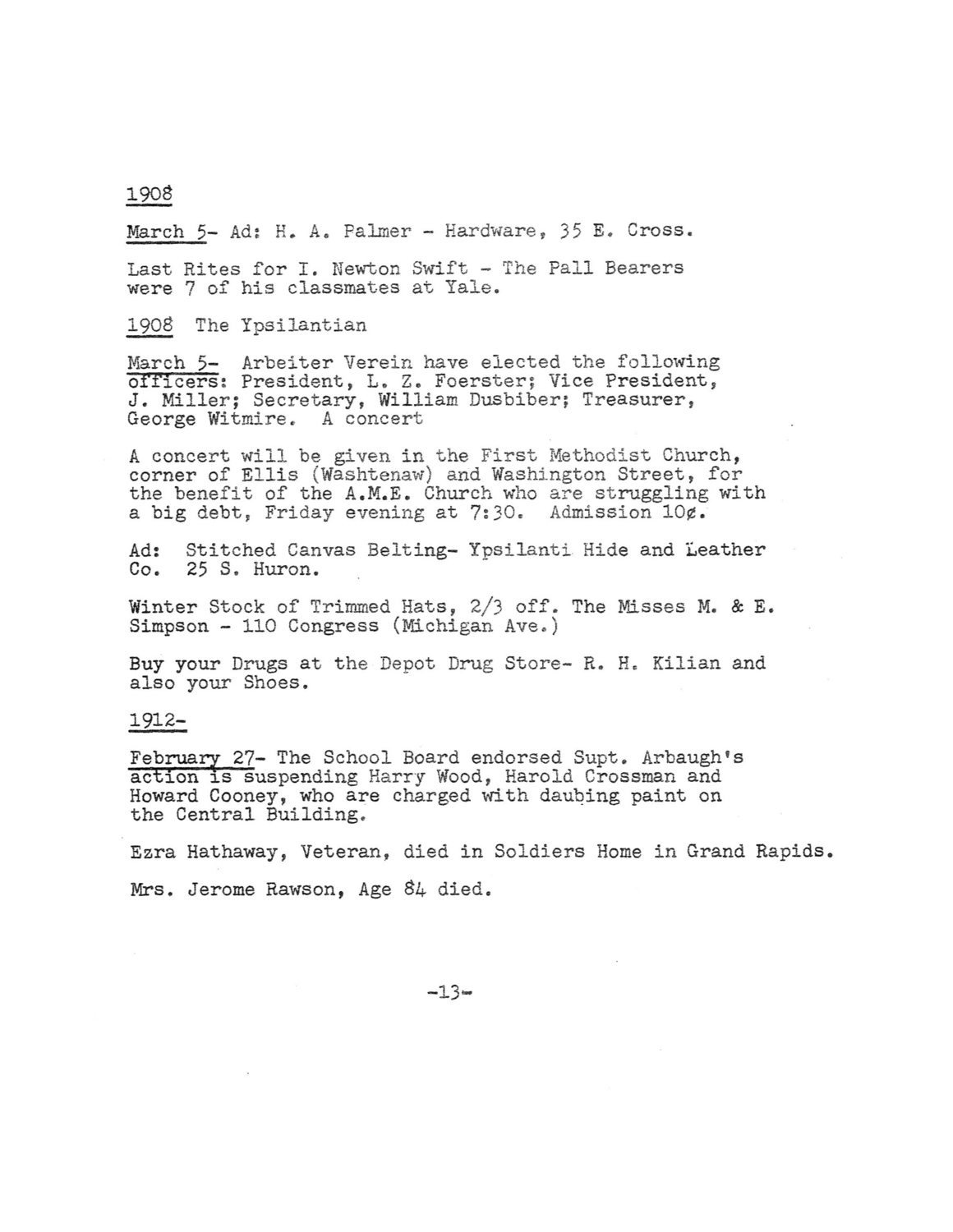 This short Chronology was assembled from old newspaper in the Archives. Some items may be duplicates but of interest.

April 10-Young Ladies School-Miss Thomas having been a teacher for 3 years had opened a School for Young Ladies-Instruction will be given in all common branches of Education together with Music, French, Drawing and 3 styles of painting.

Died-In this village, on the 9th instant, Mrs. Ellen C. consort of James M. Edmunds. Friends are requested to attend her funeral from the residence of A. H. Ballard on the 11th.

Administrators Sale-Notice is hereby given that by the virtue of license to me granted by the Honorable R. S. Wilson, Judge of Probate of Washtenaw County, to sell all the real estate belonging to Noel Moon deceased in the town of Superior on the 20th day of April-The West ½ of the North East, ¼ of the N.W., ¼ of Section 33, containing 112 3/4 acres. Given under my hand the 20th day of March 1839. Nancy Moon, Adm. estate of Noel Moon. (Francis Lambie bought this farm).

S. Salisbury, Jr. Physician and Surgeon-Office over store of McAllister and Moore.

Gridly and Skinner-Attorneys and Councillors-Office in the building of the Post Office, Huron Street. G. Thompson Gridly, George N. Skinner,

Lyman Graves advertises that he will pay no debts contracted by Apprentice William Sabins, Age 18.

Nancy Moon, Administrator for Estate of Noel Moon, to auction 112 ½ acres in Superior.

A. S. Salisbury, Jr. Physician and Surgeon-Office over McAllister and Moore.

May 9-Dry Goods, Groceries, Hardware, Crockery and full assortment of Drugs and Medicine. Teall and Allen, Corner Congress and Washington.

Empire Foundry in full blast. We are prepared to do all kinds of castings. A. B. and S. W. Shafer.

Valuable farm for sale-the beautiful farm with new brick dwelling house of two stories and out buildings complete. Situated in Superior containing 110 acres in high state of cultivation. Possession may be had on the First of April, 1853.

Boots and Shoes, Lowridge and Camp.

City Lots for sale: 25 large City Lots-Price low and terms easy. Convenient to the Normal and the Union School. Also 5½ City Lots in the Norris and Cross addition. Near the Depot together with the National Hotel which is to be torn down and moved off the lots. Mark Norris.

New Grocery and Provision Store: Bradley and Brooks. Just opened in the former store of Gort, Tisdal & Co. Packages delivered in any part of the City free. O. B. Bradley-Myron H. Brooks.

Their stock of Fancy and Staple Dry Goods, all new, and located in the store formerly occupied by J. M. Chidester & Co.-Cicero Millington-J. M. Chidester-store on Congress Street.

I. N. Conklin, D. Showerman, B. Follett, Merchant Millers-we have 150,000 feet of Pine now in our yard and good assortment of white wood, ash, oak, black walnut and butternut. 1,000,000 feet of logs wanted for which cash will be paid.

The Economist Cooking Stove for wood or coal for sale by E. J. Mills.

Jewelers: M. A. Parks; James A. Dwight, in the new store of Samuel Post & Co.

October 10-Ad: Pumps of all kinds-shop on Huron St. near the Bucklin House-Merrill & Allison.

News Depot-South side of Congress Street opposite Park's Jewelry Store-Books and latest periodicals.

Sewing Machines-Grover and Baker Machines, Prices from &dollar;30.00 to &dollar;50.00. Joseph Hand, Agent near Union School, east side Adams between Emmet and Cross.

A. H. Sweet Family Groceries at the Depot.

500 Tons, Fresh Ground Plaster for sale at the Plaster Mills of B. Follett.

May 24-Ready Made Clothing-S. Hesslein & Co., North side Congress between Huron and Washington.

Hides Wanted-Cash paid for finest at his Tannery on Congress Street two doors from Washington Street.

E. G. Boyce & Co., have removed to the rooms formerly occupied by the News Depot, two doors south of the Post Office on Huron Street.

Mower or Reaper-the best is the Davis Reaper. H. A. Boutell & Son, Agents, and the Ligot Toledo Mower.

August 13-Four Hundred fifty tons of coal is what the State Normal School burns. It took 3 weeks to make delivery and store it in the basement.

August 14-Long Article: “Ours Batchelors” Who they are and where they may be found-

August 14-The six weeks term at the Normal has ended. There have been over 50 students in attendance.

Norval Hawkins of East Saginaw is in town visiting his parents.

Col. George H. Burroughs, a pioneer of Belleville and father of S. W. and George Burroughs, died last Friday, age 83 years. He had settled in Belleville in 1845. He won his title in the Mexican War.

Brown & Mason, Machinists, removed from Saline and are in the old McCullough Bros Shop at 4 East Congress (Michigan Ave.). The McCullough Bros will continue operating the foundry.

On October 26th, Elmer W. Bowen of Ypsilanti, commanding the First Infantry, to his oath of office as Brigadier General of the State Troops.

General Bowen was born April 8, 1846. Came to Michigan with parents in 1854. Enlisted at age 16 in Ninth Michigan Calvary Co., B. In 100 battles and mustered out July 21, 1865. Engaged in the manufacture of brooms and in 1888 appointed Mail Agent on the fast mail between Detroit and Cleveland. Married in Chicago in 1870 to Nellie L. Dow of Adrian. He is a member and past Commander of Carpenter Post No. 180. In December 25, 1872 he became a member of the Ypsilanti Light Guards.

April 13-Ad: Franklin I. Carpenter-Hardward and Stoves. 124 Congress-successor to Robbins and Edwards-

May 29- Unveiling of the Soldier's Monument in Highland Cemetery.

24 in the graduating class of Ypsilanti High School

April 25-It is reported that Frank Owen the young Ypsilanti Pitcher who is being “tried out” for the Detroit team, has been offered &dollar;1,500.00 by the Brooklyn National League team to jump his contract.

Groceries at Phillips Bros-27 Cross Street at the Depot.

March 5 Ad: H.A. Palmer-Hardware, 35 E. Cross. Last rites for I. Newton Swift-the Pall Bearers were of his classmates at Yale.

March 5 Arbeiter Verein have elected the following officers: President, L.Z. Foerster; Vice Pres., J. Miller; Secretary, William Dusbiber; Treasurer, George Witmire. A concert will be given in the First Methodist Church, corner of Ellis (Washtenaw) and Washington Street, for the benefit of the A.M.E. Church who are struggling with a big debt, Friday evening at 7:30. Admission 10¢.

Feb. 27 The School Board endorsed Supt. Arbaugh's action in suspending Harry Wood, Harold Crossman and Howard Cooney, who are charged with daubing paint on the Central building.

Last Rites for I. Newton Swift-The Pall Bearers were 7 of his classmates at Yale.

A concert will be given in the First Methodist Church, corner of Ellis (Washtenaw) and Washington Street, for the benefit of the A.M.E. Church who are struggling with a big debt, Friday evening at 7:30. Admission 10¢.

Buy your Drugs at the Depot Drug Store-R. H. Killian and also your Shoes.

February 27-The School Board endorsed Supt. Arbaugh's action is suspending Harry Wood, Harold Crossman and Howard Cooney, who are charged with daubing paint on the Central Building.