Our Cultural Heritage: The Hillside Farm 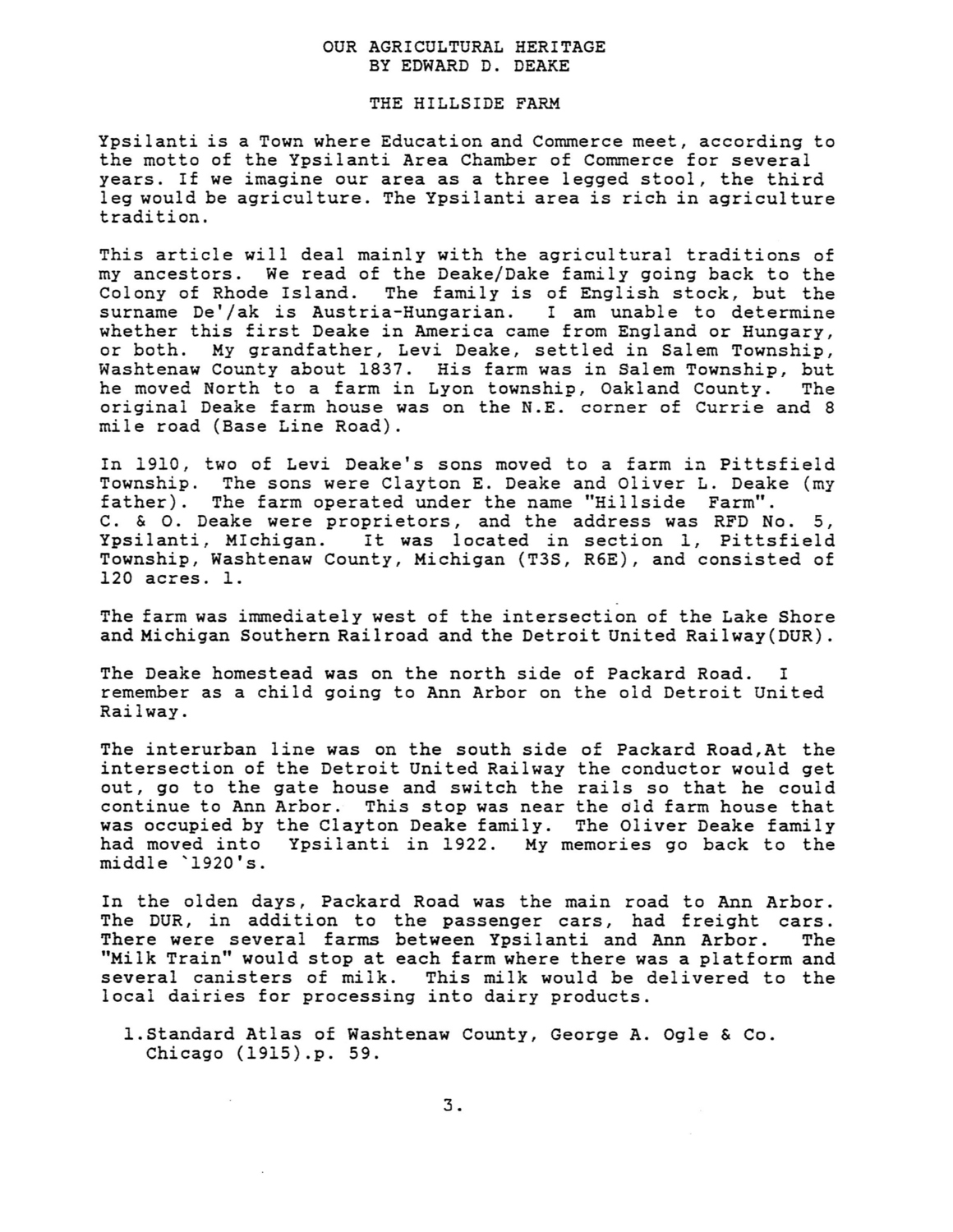 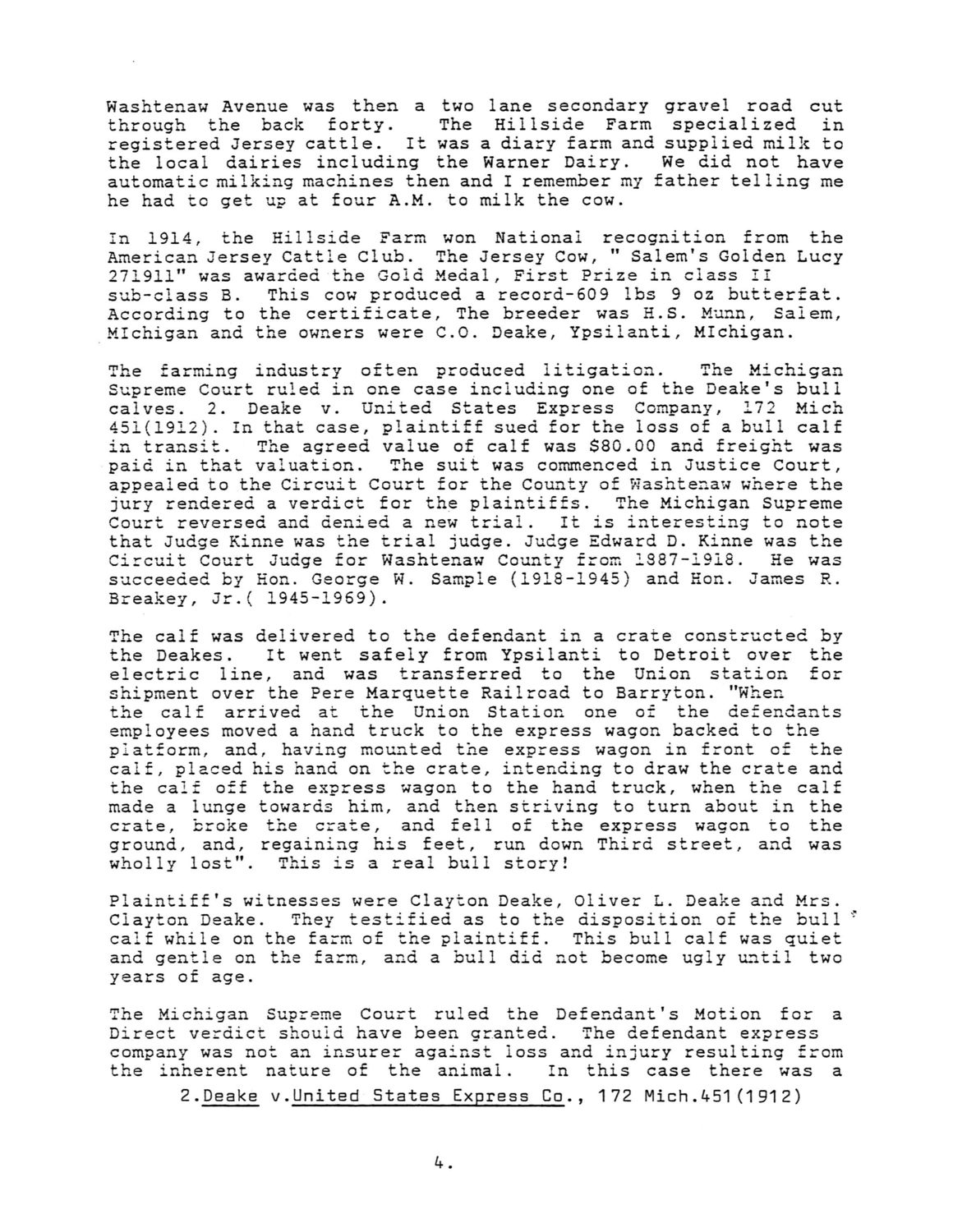 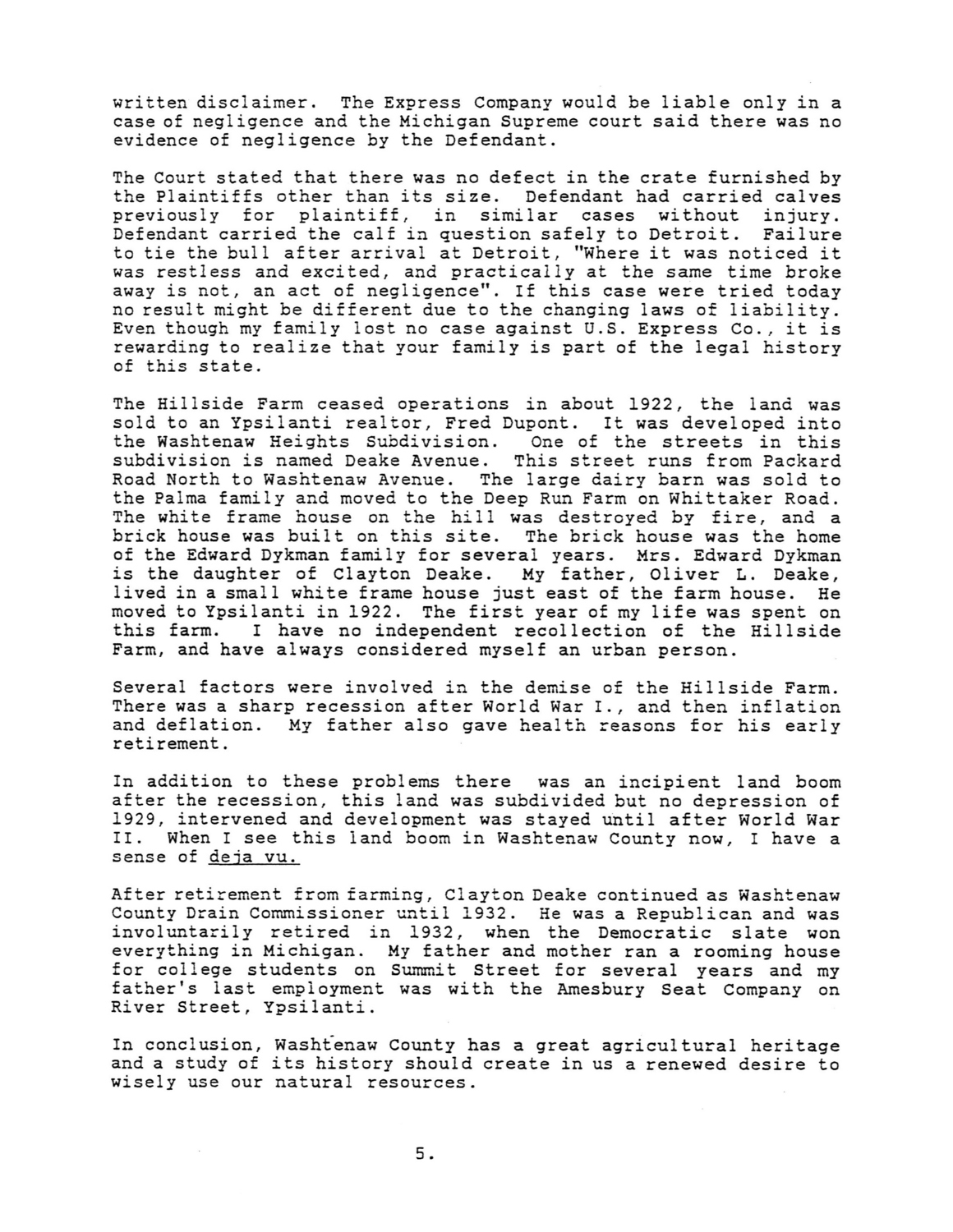 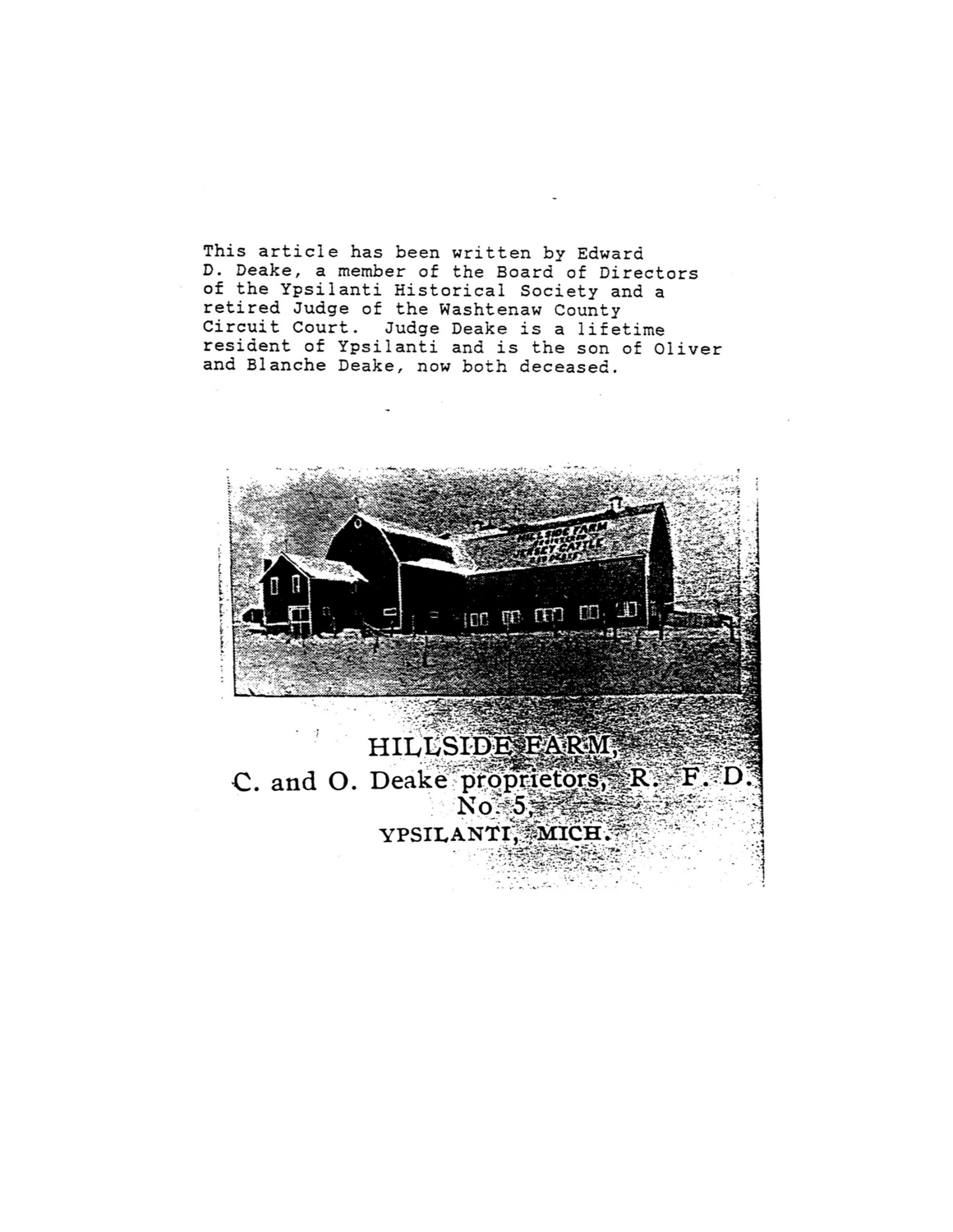 Ypsilanti is a Town where Education and Commerce meet, according to the motto of theYpsilanti Area Chamber of Commerce for several years. If we imagine our area as a three legged stool, the third leg would be agriculture. The Ypsilanti area is rich in agriculture tradition.

This article will deal mainly with the agricultural traditions of my ancestors. We read of the Deake/Dake family going back to the Colony of Rhode Island. The family is of English stock, but the surname De'/ak is Austria-Hungarian. I am unable to determine whether this first Deake in America came from England or Hungary, or both. My grandfather, Levi Deake, settled in Salem Township, Washtenaw County about 1837. His farm was in Salem Township, but he moved North to a farm in Lyon township, Oakland County. The original Deake farm house was on the N.E. corner of Currie and 8 mile road (Base Line Road).

In 1910, two of Levi Deake's sons moved to a farm in Pittsfield Township. The sons were Clayton E. Deake and Oliver L. Deake (my father). The farm operated under the name “Hillside Farm”. C. & O. Deake were proprietors, and the address was RFD No. 5, Ypsilanti, MIchigan. It was located in section 1, Pittsfield Township, Washtenaw County, Michigan (T3S, R6E), and consisted of 120 acres. 1.

The farm was immediately west of the intersection of the Lake Shore and Michigan Southern Railroad and the Detroit United Railway (DUR).

The Deake homestead was on the north side of Packard Road. I remember as a child going to Ann Arbor on the old Detroit United Railway.

The interurban line was on the south side of Packard Road, At the intersection of the Detroit United Railway the conductor would get out, go to the gate house and switch the rails so that he could continue to Ann Arbor. This stop was near the old farm house that was occupied by the Clayton Deake family. The Oliver Deake family had moved into Ypsilanti in 1922. My memories go back to the middle 1920's.

In the olden days, Packard Road was the main road to Ann Arbor. The DUR, in addition to the passenger cars, had freight cars. There were several farms between Ypsilanti and Ann Arbor. The “Milk Train” would stop at each farm where there was a platform and several canisters of milk. This milk would be delivered to the local dairies for processing into dairy products.

Washtenaw Avenue was then a two lane secondary gravel road cut through the back forty. The Hillside Farm specialized in registered Jersey cattle. It was a diary farm and supplied milk to the local dairies including the Warner Dairy. We did not have automatic milking machines then and I remember my father telling me he had to get up at four A.M. to milk the cow.

In 1914, the Hillside Farm won National recognition from the American Jersey Cattle Club. The Jersey Cow, “Salem's Golden Lucy 271911” was awarded the Gold Medal, First Prize in class II sub-class B. This cow produced a record-609 Ibs 9 oz butterfat. According to the certificate. The breeder was H.S. Munn, Salem, MIchigan and the owners were C.O. Deake, Ypsilanti, MIchigan.

The farming industry often produced litigation. The Michigan Supreme Court ruled in one case including one of the Deake's bull calves. 2. Deake v. United States Express Company, 172 Mich 451 (1912). In that case, plaintiff sued for the loss of a bull calf in transit. The agreed value of calf was &dollar;80.00 and freight was paid in that valuation. The suit was commenced in Justice Court, appealed to the Circuit Court for the County of Washtenaw where the jury rendered a verdict for the plaintiffs. The Michigan Supreme Court reversed and denied a new trial. It is interesting to note that Judge Kinne was the trial judge. Judge Edward D. Kinne was the Circuit Court Judge for Washtenaw County from 1887–1918. He was succeeded by Hon. George W. Sample (1918–1945) and Hon. James R. Breakey, Jr. (1945–1969).

The calf was delivered to the defendant in a crate constructed by the Deakes. It went safely from Ypsilanti to Detroit over the electric line, and was transferred to the Union station for shipment over the Pere Marquette Railroad to Barryton. “When the calf arrived at the Union Station one of the defendants employees moved a hand truck to the express wagon backed to the platform, and, having mounted the express wagon in front of the calf, placed his hand on the crate, intending to draw the crate and the calf off the express wagon to the hand truck, when the calf made a lunge towards him, and then striving to turn about in the crate, broke the crate, and fell of the express wagon to the ground, and, regaining his feet, run down Third street, and was wholly lost”. This is a real bull story!

Plaintiff's witnesses were Clayton Deake, Oliver L. Deake and Mrs. Clayton Deake. They testified as to the disposition of the bull calf while on the farm of the plaintiff. This bull calf was quiet and gentle on the farm, and a bull did not become ugly until two years of age.

The Michigan Supreme Court ruled the Defendant's Motion for a Direct verdict should have been granted. The defendant express company was not an insurer against loss and injury resulting from the inherent nature of the animal. In this case there was a

written disclaimer. The Express Company would be liable only in a case of negligence and the Michigan Supreme court said there was no evidence of negligence by the Defendant.

The Court stated that there was no defect in the crate furnished by the Plaintiffs other than its size. Defendant had carried calves previously for plaintiff, in similar cases without injury. Defendant carried the calf in question safely to Detroit. Failure to tie the bull after arrival at Detroit, “Where it was noticed it was restless and excited, and practically at the same time broke away is not, an act of negligence”. If this case were tried today no result might be different due to the changing laws of liability. Even though my family lost no case against U.S. Express Co., it is rewarding to realize that your family is part of the legal history of this state.

The Hillside Farm ceased operations in about 1922, the land was sold to an Ypsilanti realtor, Fred Dupont. It was developed into the Washtenaw Heights Subdivision. One of the streets in this subdivision is named Deake Avenue. This street runs from Packard Road North to Washtenaw Avenue. The large dairy barn was sold to the Palma family and moved to the Deep Run Farm on Whittaker Road. The white frame house on the hill was destroyed by fire, and a brick house was built on this site. The brick house was the home of the Edward Dykman family for several years. Mrs. Edward Dykman is the daughter of Clayton Deake. My father, Oliver L. Deake, lived in a small white frame house just east of the farm house. He moved to Ypsilanti in 1922. The first year of my life was spent on this farm. I have no independent recollection of the Hillside Farm, and have always considered myself an urban person.

Several factors were involved in the demise of the Hillside Farm. There was a sharp recession after World War I., and then inflation and deflation. My father also gave health reasons for his early retirement.

In addition to these problems there was an incipient land boom after the recession, this land was subdivided but no depression of 1929, intervened and development was stayed until after World War II. When I see this land boom in Washtenaw County now, I have a sense of deja vu.

After retirement from farming, Clayton Deake continued as Washtenaw County Drain Commissioner until 1932. He was a Republican and was involuntarily retired in 1932, when the Democratic slate won everything in Michigan. My father and mother ran a rooming house for college students on Summit Street for several years and my father's last employment was with the Amesbury Seat Company on River Street, Ypsilanti.

In conclusion, Washtenaw County has a great agricultural heritage and a study of its history should create in us a renewed desire to wisely use our natural resources.

This article has been written by Edward D. Deake, a member of the Board of Directors of the Ypsilanti Historical Society and a retired Judge of the Washtenaw County Circuit Court. Judge Deake is a lifetime resident of Ypsilanti and is the son of Oliver and Blanche Deake, now both deceased.