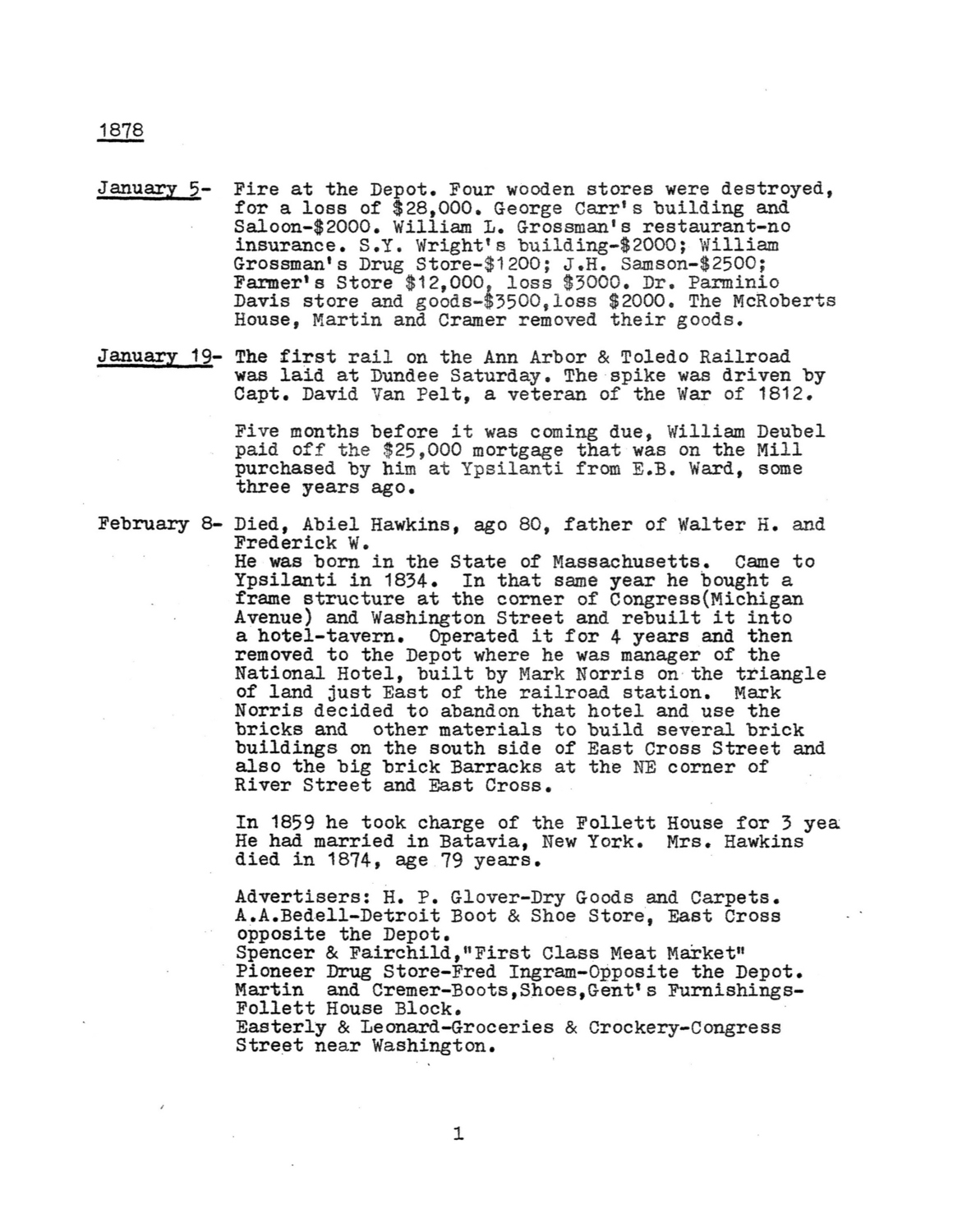 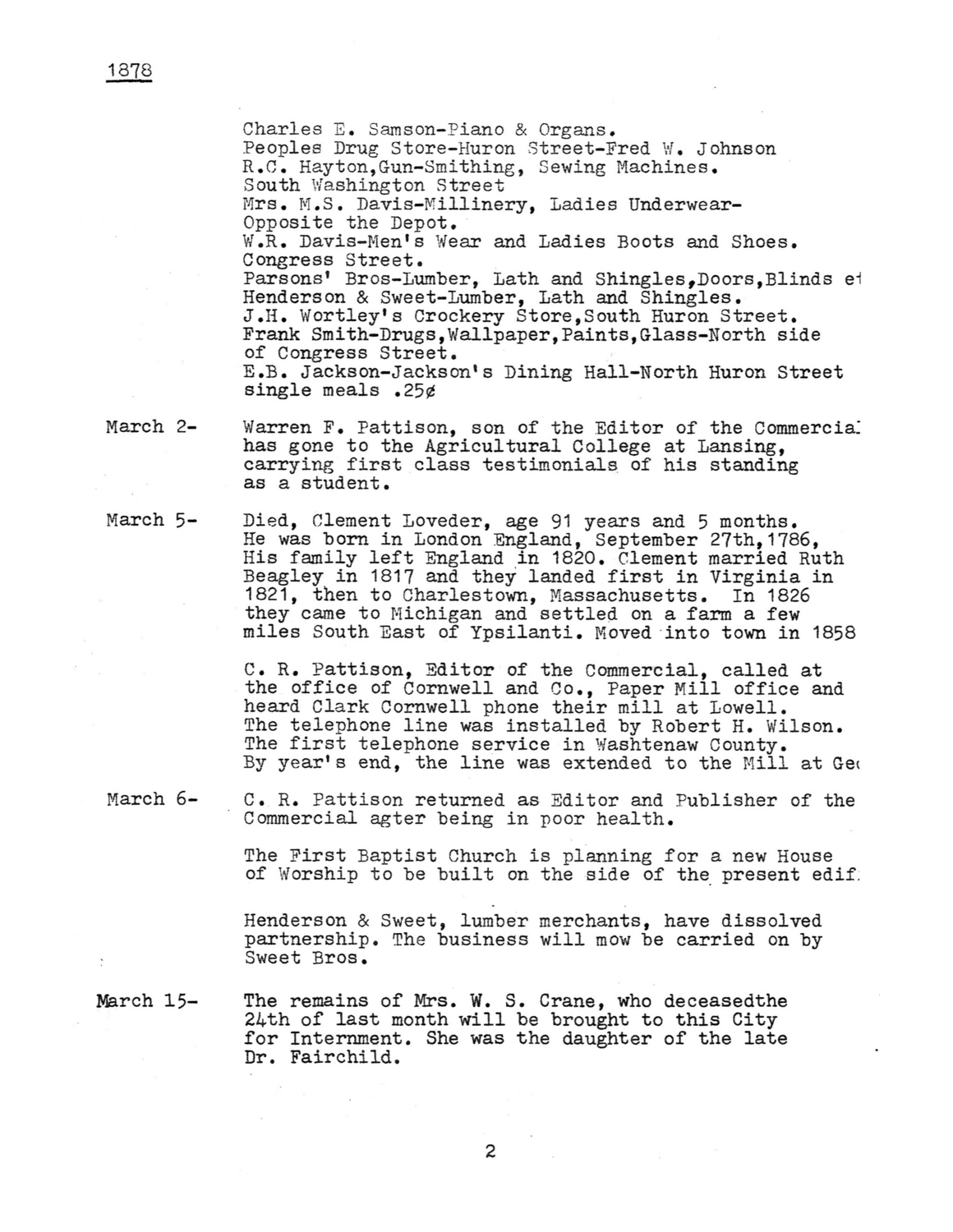 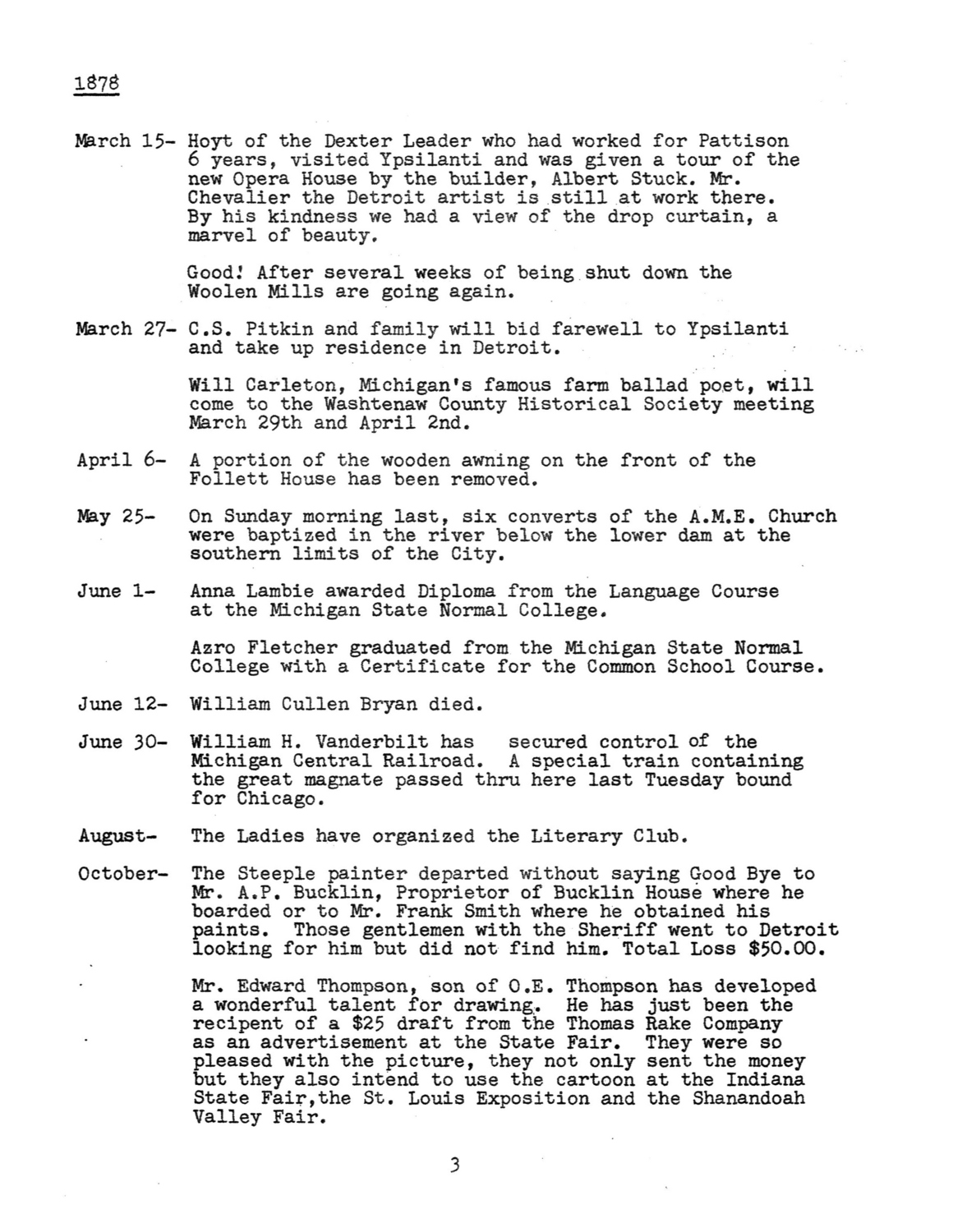 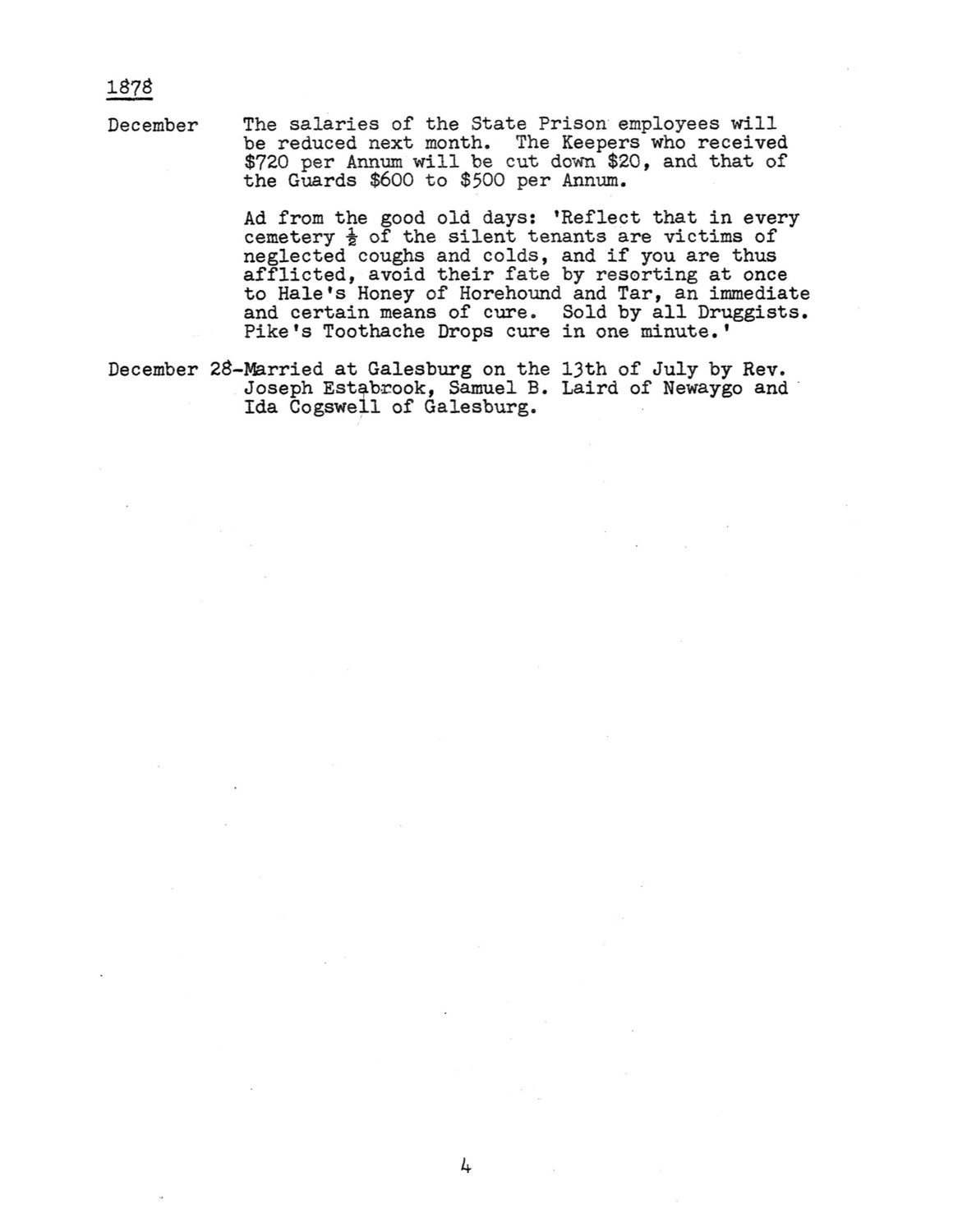 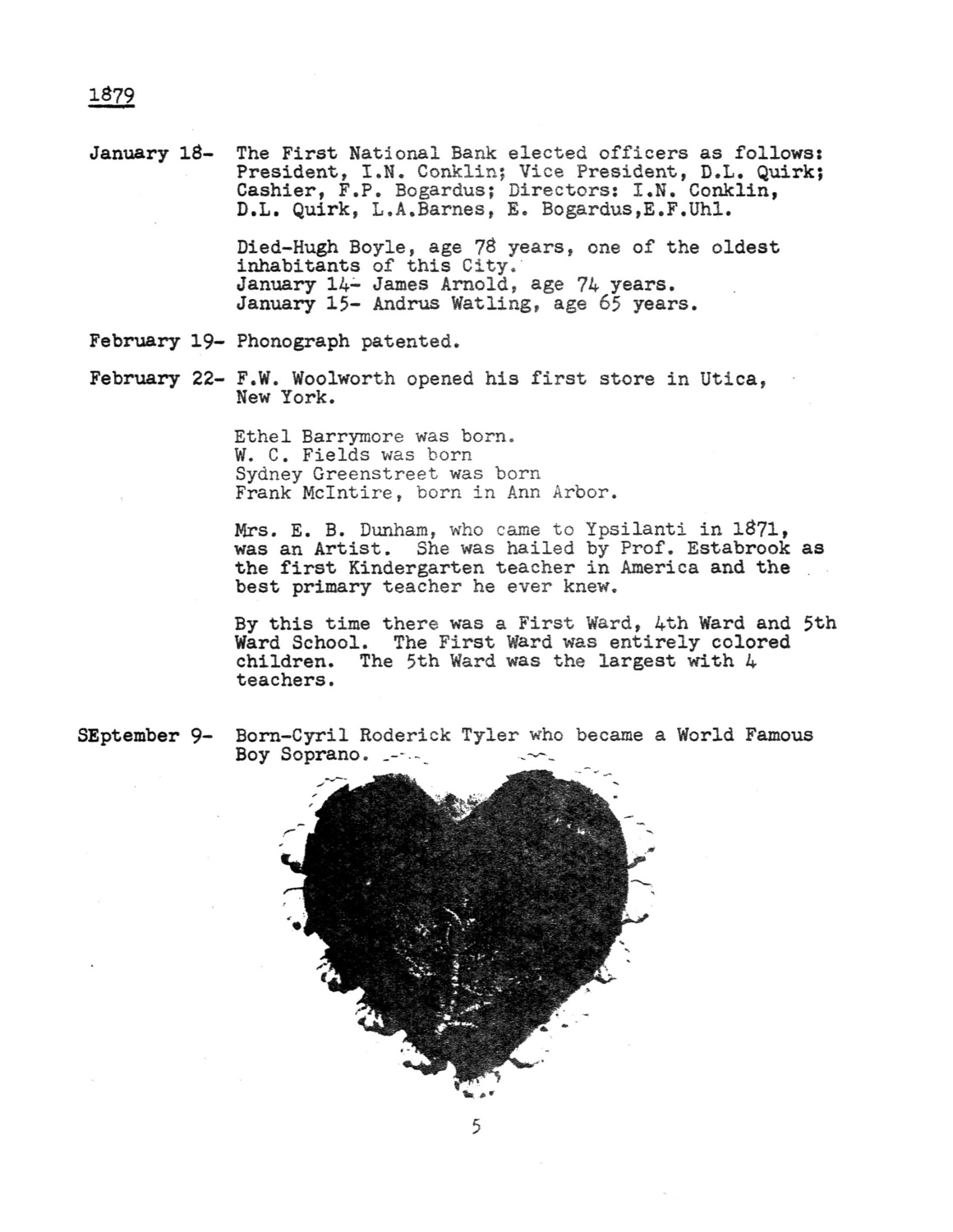 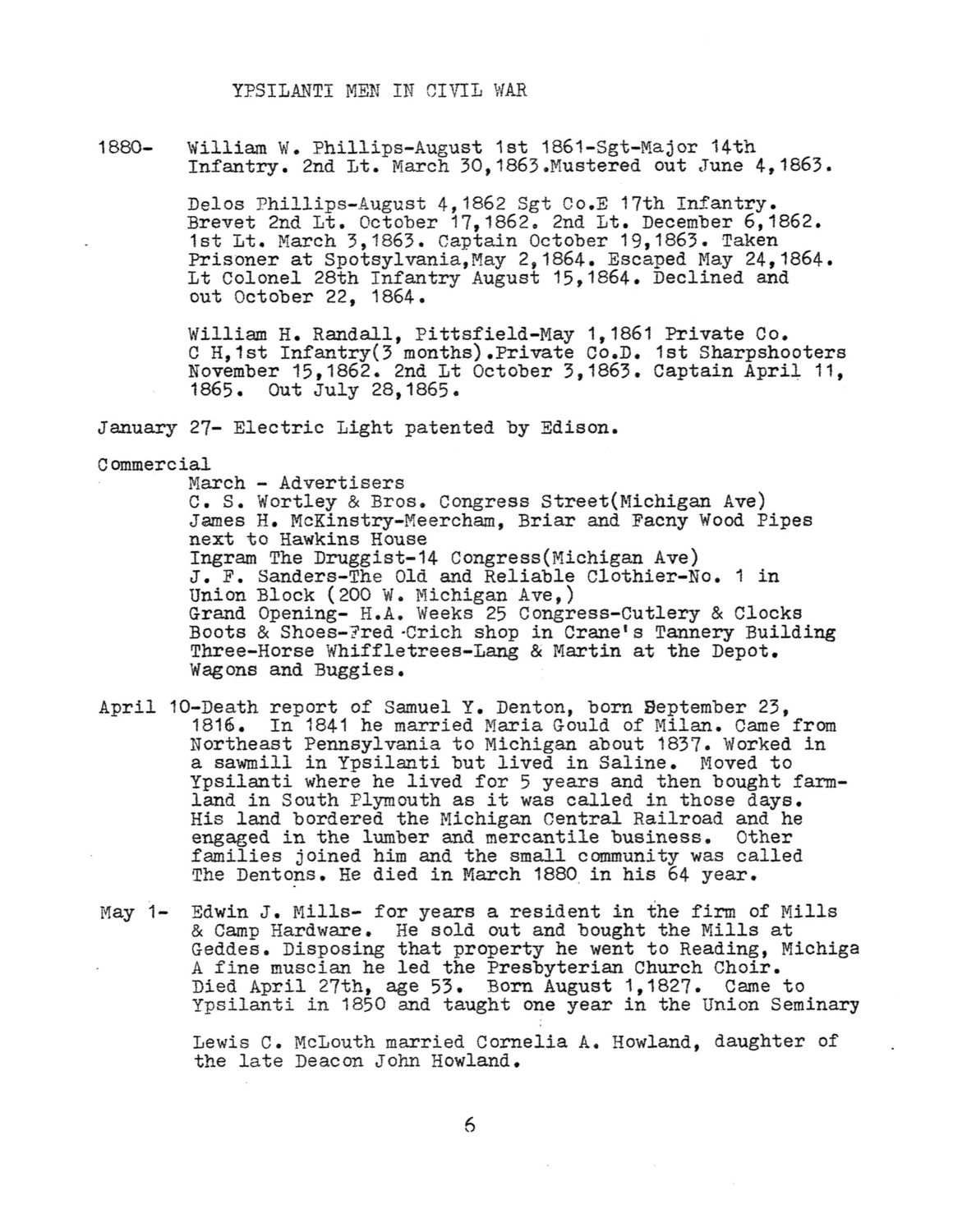 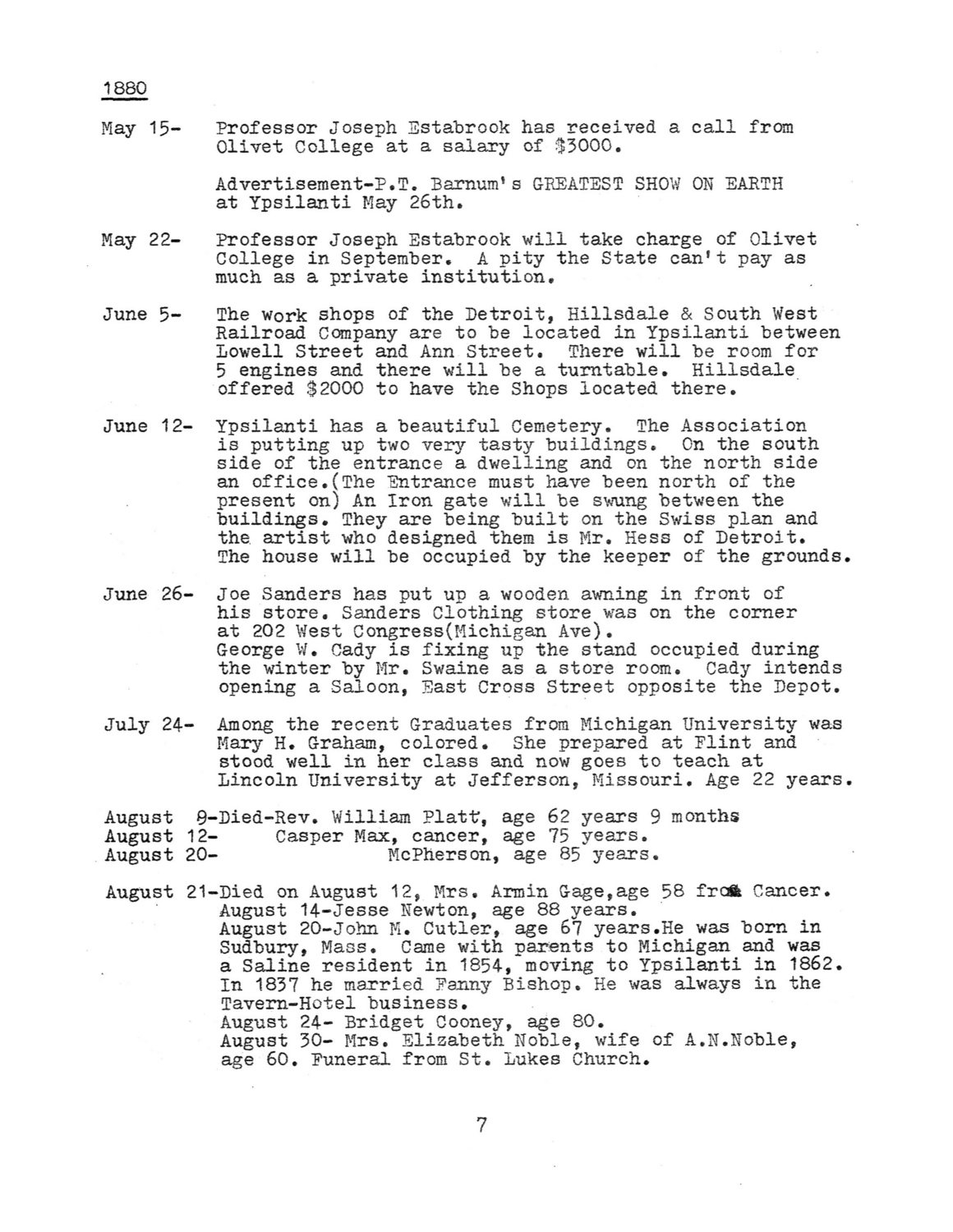 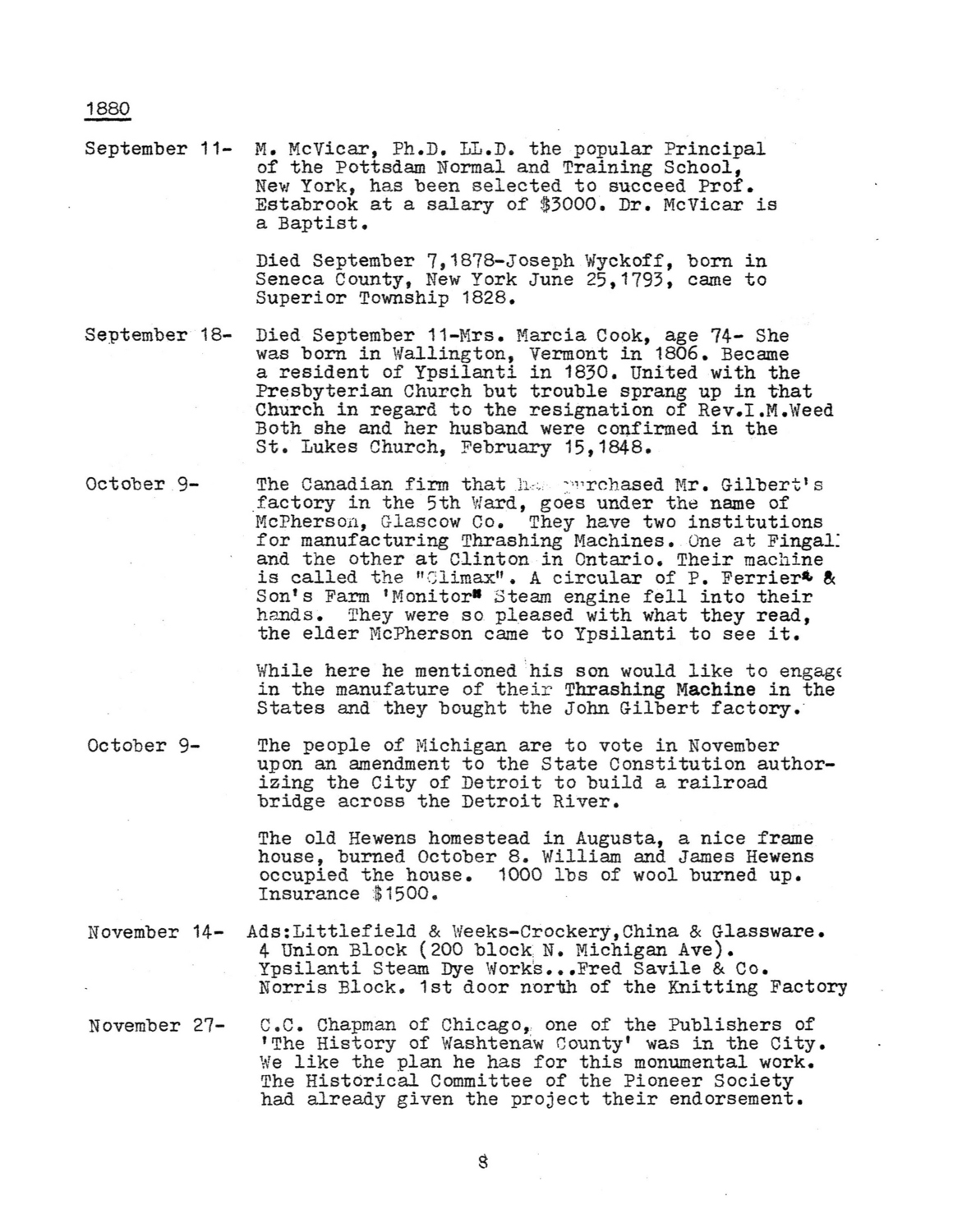 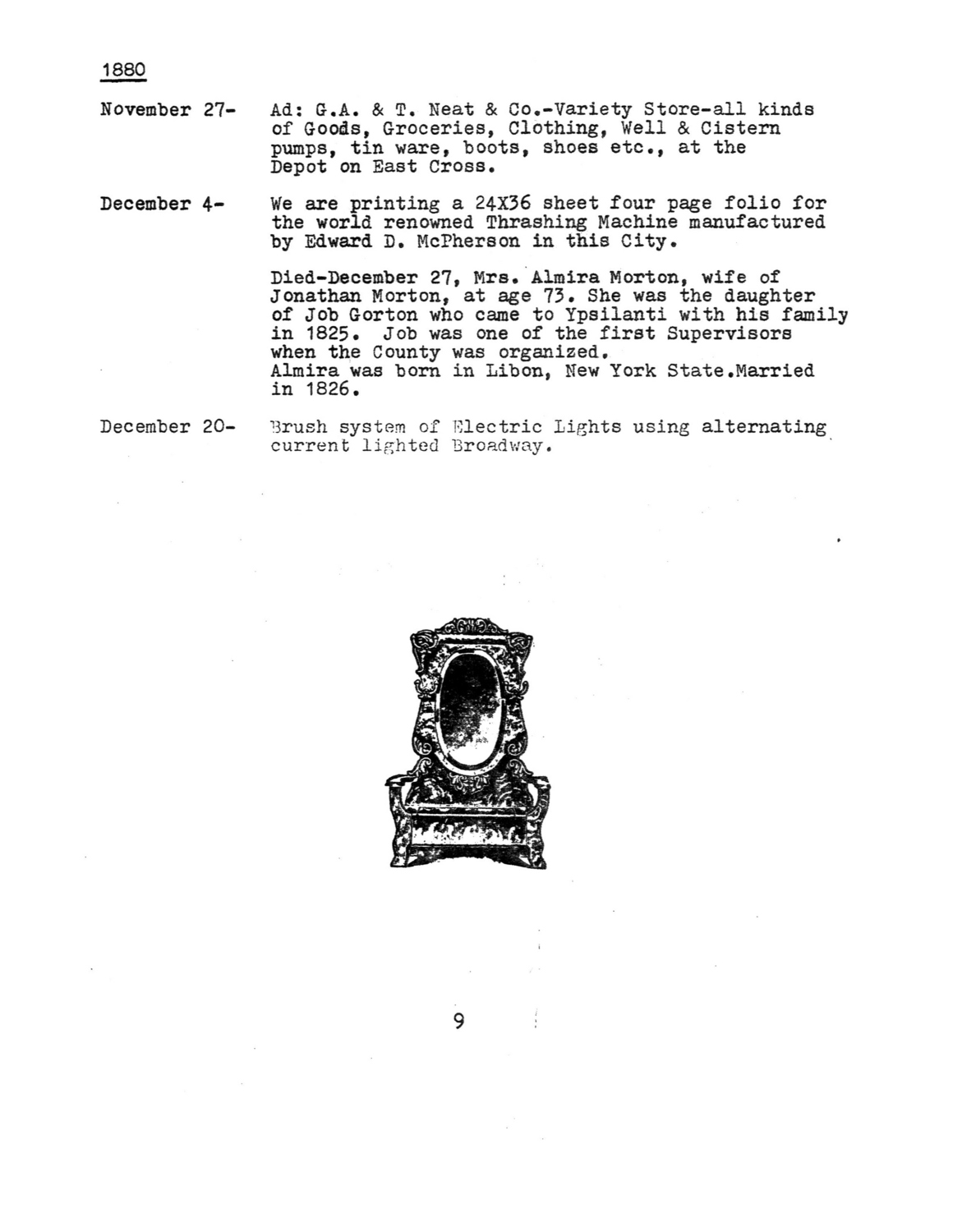 January 19- The first rail on the Ann Arbor & Toledo Railroad was laid at Dundee Saturday. The spike was driven by Capt. David Van Pelt, a veteran of the War of 1812.

Five months before it was coming due, William Deubel paid off the &dollar;25,000 mortgage that was on the Mill purchased by him at Ypsilanti from E.B. Ward, some three years ago.

February 8-Died, Abiel Hawkins, ago 80, father of Walter H. and Frederick W. He was born in the State of Massachusetts. Came to Ypsilanti in 1834. In that same year he bought a frame structure at the corner of Congress (Michigan Avenue) and Washington Street and rebuilt it into a hotel-tavern. Operated it for 4 years and then removed to the Depot where he was manager of the National Hotel, built by Mark Norris on the triangle of land just East of the railroad station. Mark Norris decided to abandon that hotel and use the bricks and other materials to build several brick buildings on the south side of East Cross Street and also the big brick Barracks at the NE corner of River Street and East Cross.

March 2-Warren F. Pattison, son of the Editor of the Commercial has gone to the Agricultural College at Lansing, carrying first class testimonials of his standing as a student.

March 5-Died, Clement Loveder, age 91 years and 5 months. He was born in London England, September 27th, 1786, His family left England in 1820. Clement married Ruth Beagley in 1817 and they landed first in Virginia in 1821, then to Charlestown, Massachusetts. In 1826 they came to Michigan and settled on a farm a few miles South East of Ypsilanti. Moved into town in 1858

C. R. Pattison, Editor of the Commercial, called at the office of Cornwell and Co., Paper Mill office and heard Clark Cornwell phone their mill at Lowell. The telephone line was installed by Robert H. Wilson. The first telephone service in Washtenaw County. By year's end, the line was extended to the Mill at Ge

March 6-C. R. Pattison returned as Editor and Publisher of the Commercial agter being in poor health.

The First Baptist Church is planning for a new House of Worship to be built on the side of the present edif.

Henderson & Sweet, lumber merchants, have dissolved partnership. The business will mow be carried on by Sweet Bros.

March 15-The remains of Mrs. W.S. Crane, who deceased the 24th of last month will be brought to this City for Internment. She was the daughter of the late Dr. Fairchild.

March 15-Hoyt of the Dexter Leader who had worked for Pattison 6 years, visited Ypsilanti and was given a tour of the new Opera House by the builder, Albert Stuck. Mr. Chevalier the Detroit artist is still at work there. By his kindness we had a view of the drop curtain, a marvel of beauty.

Good! After several weeks of being shut down the Woolen Mills are going again.

March 27-C.S. Pitkin and family will bid farewell to Ypsilanti and take up residence in Detroit.

April 6-A portion of the wooden awning on the front of the Follett House has been removed.

May 25-On Sunday morning last, six converts of the A.M.E. Church were baptized in the river below the lower dam at the southern limits of the City.

Azro Fletcher graduated from the Michigan State Normal College with a Certificate for the Common School Course.

October-The Steeple painter departed without saying Good Bye to Mr. A.P. Bucklin, Proprietor of Bucklin House where he boarded or to Mr. Frank Smith where he obtained his paints. Those gentlemen with the Sheriff went to Detroit looking for him but did not find him. Total Loss &dollar;50.00.

Mr. Edward Thompson, son of O.E. Thompson has developed a wonderful talent for drawing. He has just been the recipient of a &dollar;25 draft from the Thomas Rake Company as an advertisement at the State Fair. They were so pleased with the picture, they not only sent the money but they also intend to use the cartoon at the Indiana State Fair, the St. Louis Exposition and the Shanandoah Valley Fair.

December The salaries of the State Prison employees will be reduced next month. The Keepers who received &dollar;720 per Annum will be cut down &dollar;20, and that of the Guards &dollar;600 to &dollar;500 per Annum.

Ad from the good old days: ‘Reflect that in every cemetery 1/2 of the silent tenants are victims of neglected coughs and colds, and if you are thus afflicted, avoid their fate by resorting at once to Hale's Honey of Horehound and Tar, an immediate and certain means of cure. Sold by all Druggists. Pike's Toothache Drops cure in one minute.’

December 28-Married at Galesburg on the 13th of July by Rev. Joseph Estabrook, Samuel B. Laird of Newaygo and Ida Cogswell of Galesburg.

Died-Hugh Boyle, age 78 years, one of the oldest inhabitants of this City.

Mrs. E. B. Dunham, who came to Ypsilanti in 1871, was an Artist. She was hailed by Prof. Estabrook as the first Kindergarten teacher in America and the best primary teacher he ever knew.

By this time there was a First Ward, 4th Ward and 5th Ward School. The First Ward was entirely colored children. The 5th Ward was the largest with 4 teachers.

April 10-Death report of Samuel Y. Denton, born September 23, 1816. In 1841 he married Maria Gould of Milan. Came from Northeast Pennsylvania to Michigan about 1837. Worked in a sawmill in Ypsilanti but lived in Saline. Moved to Ypsilanti where he lived for 5 years and then bought farmland in South Plymouth as it was called in those days. His land bordered the Michigan Central Railroad and he engaged in the lumber and mercantile business. Other families joined him and the small community was called The Dentons. He died in March 1880 in his 64 year.

May 1-Edwin J. Mills-for years a resident in the firm of Mills & Camp Hardware. He sold out and bought the Mills at Geddes. Disposing that property he went to Reading, Michigan. A fine musician, he led the Presbyterian Church Choir. Died April 27th, age 53. Born August 1, 1827. Came to Ypsilanti in 1850 and taught one year in the Union Seminary

May 15-Professor Joseph Estabrook has received a call from Olivet College at a salary of &dollar;3000.

Advertisement-P.T. Barnum's GREATEST SHOW ON EARTH at Ypsilanti May 26th.

May 22-Professor Joseph Estabrook will take charge of Olivet College in September. A pity the State can't pay as much as a private institution.

June 5-The work shops of the Detroit, Hillsdale & South West Railroad Company are to be located in Ypsilanti between Lowell Street and Ann Street. There will be room for 5 engines and there will be a turntable. Hillsdale offered &dollar;2000 to have the Shops located there.

June 12-Ypsilanti has a beautiful Cemetery. The Association is putting up two very tasty buildings. On the south side of the entrance a dwelling and on the north side an office. (The Entrance must have been north of the present on) An Iron gate will be swung between the buildings. They are being built on the Swiss plan and the artist who designed them is Mr. Hess of Detroit. The house will be occupied by the keeper of the grounds.

June 26-Joe Sanders has put up a wooden awning in front of his store. Sanders Clothing store was on the corner at 202 West Congress (Michigan Ave).

July 24-Among the recent Graduates from Michigan University was Mary H. Graham, colored. She prepared at Flint and stood well in her class and now goes to teach at Lincoln University at Jefferson, Missouri. Age 22 years.

September 11-M. McVicar, Ph.D. LL.D. the popular Principal of the Pottsdam Normal and Training School, New York, has been selected to succeed Prof. Estabrook at a salary of &dollar;3000. Dr. McVicar is a Baptist.

September 18-Died September 11-Mrs. Marcia Cook, age 74-She was born in Wallington, Vermont in 1806. Became a resident of Ypsilanti in 1830. United with the Presbyterian Church but trouble sprang up in that Church in regard to the resignation of Rev. I.M.Weed Both she and her husband were confirmed in the St. Lukes Church, February 15, 1848.

October 9-The Canadian firm that has purchased Mr. Gilbert's factory in the 5th Ward, goes under the name of McPherson, Glascow Co. They have two institutions for manufacturing Thrashing Machines. One at Fingal and the other at Clinton in Ontario. Their machine is called the “Climax”. A circular of P. Ferrier & Son's Farm ‘Monitor’ Steam engine fell into their hands. They were so pleased with what they read, the elder McPherson came to Ypsilanti to see it.

While here he mentioned his son would like to engage in the manufacture of their Thrashing Machine in the States and they bought the John Gilbert factory.

October 9-The people of Michigan are to vote in November upon an amendment to the State Constitution authorizing the City of Detroit to build a railroad bridge across the Detroit River.

November 27-C.C. Chapman of Chicago, one of the Publishers of ‘The History of Washtenaw County’ was in the City. We like the plan he has for this monumental work. The Historical Committee of the Pioneer Society had already given the project their endorsement.

December 4-We are printing a 24 × 36 sheet four page folio for the world renowned Thrashing Machine manufactured by Edward D. McPherson in this City.

Died-December 27, Mrs. Almira Morton, wife of Jonathan Morton, at age 73. She was the daughter of Job Gorton who came to Ypsilanti with his family in 1825. Job was one of the first Supervisors when the County was organized.

Almira was born in Libon, New York State. Married in 1826.