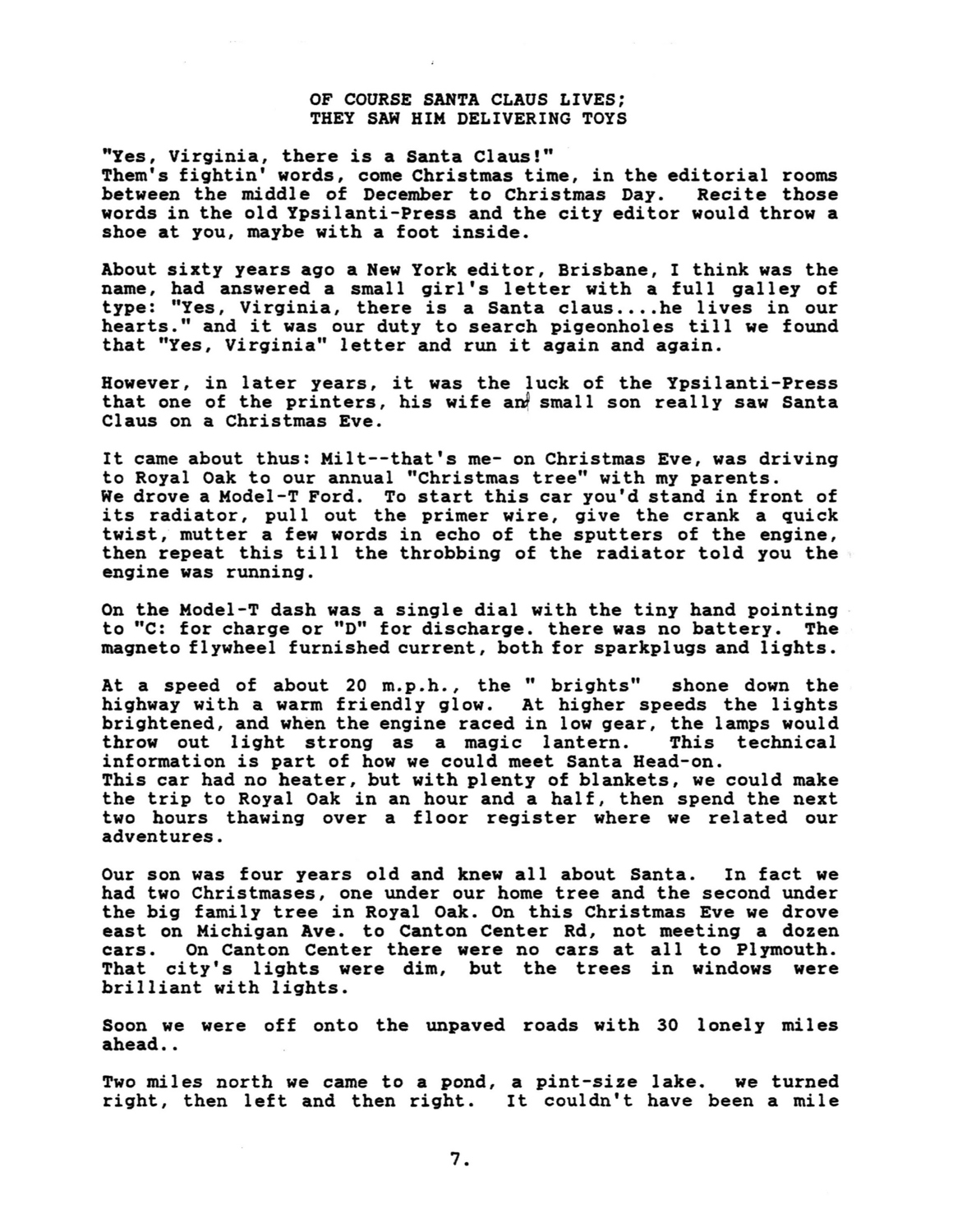 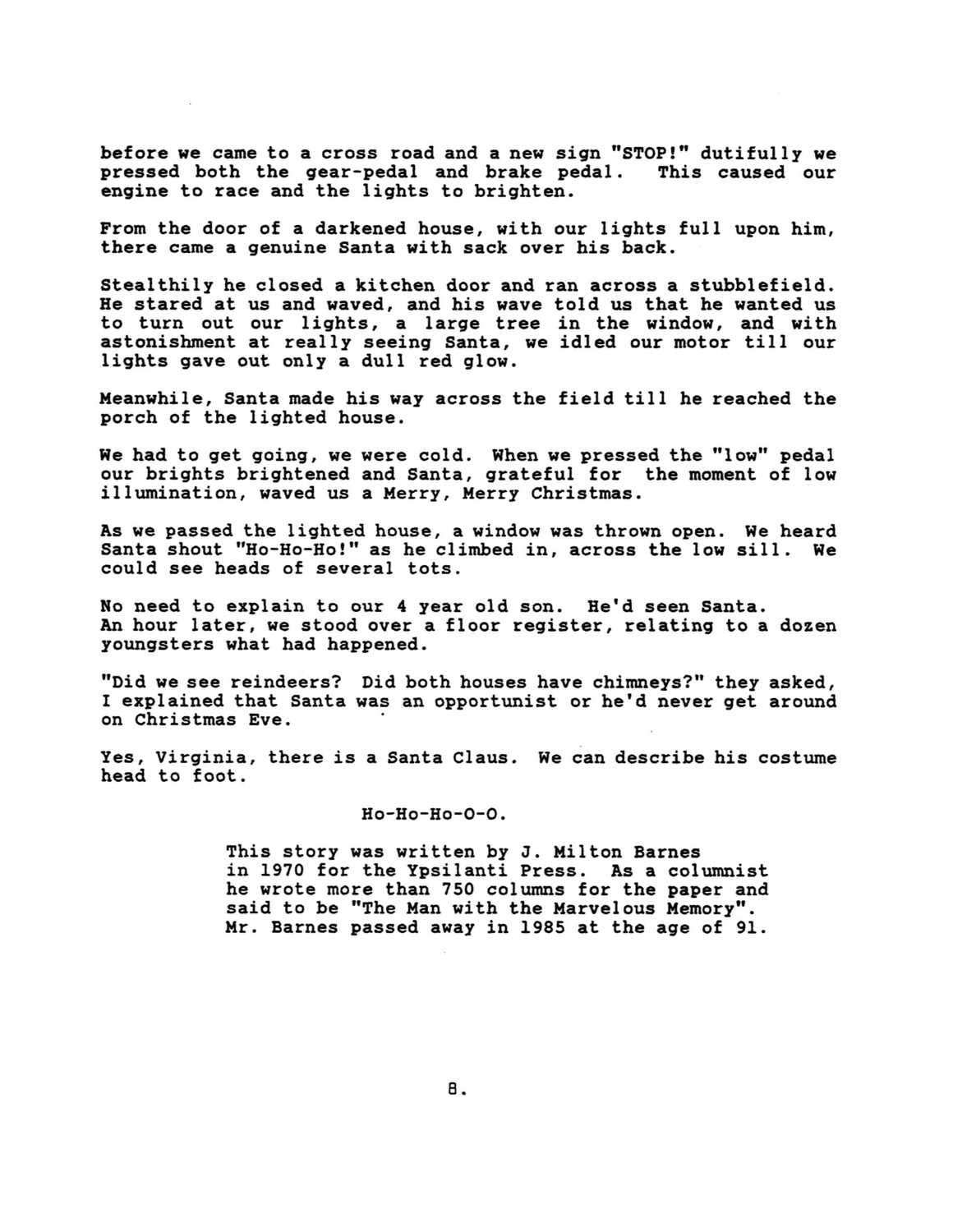 Of Course Santa Claus Lives; they saw him delivering toys

“Yes, Virginia, there is a Santa Claus!” Them's fightin' words, come Christmas time, in the editorial rooms between the middle of December to Christmas Day. Recite those words in the old Ypsilanti-Press and the city editor would throw a shoe at you, maybe with a foot inside.

About sixty years ago a New York editor, Brisbane, I think was the name, had answered a small girl's letter with a full galley of type: “Yes, Virginia, there is a Santa claus….he lives in our hearts.” and it was our duty to search pigeonholes till we found that “Yes, Virginia” letter and run it again and again.

However, in later years, it was the luck of the Ypsilanti-Press that one of the printers, his wife and small son really saw Santa Claus on a Christmas Eve.

It came about thus: Milt—that's me-on Christmas Eve, was driving to Royal Oak to our annual “Christmas tree” with my parents. We drove a Model-T Ford. To start this car you'd stand in front of its radiator, pull out the primer wire, give the crank a quick twist, mutter a few words in echo of the sputters of the engine, then repeat this till the throbbing of the radiator told you the engine was running.

On the Model-T dash was a single dial with the tiny hand pointing to “C: for charge or “D” for discharge, there was no battery. The magneto flywheel furnished current, both for sparkplugs and lights.

At a speed of about 20 m.p.h., the “brights” shone down the highway with a warm friendly glow. At higher speeds the lights brightened, and when the engine raced in low gear, the lamps would throw out light strong as a magic lantern. This technical information is part of how we could meet Santa Head-on.

This car had no heater, but with plenty of blankets, we could make the trip to Royal Oak in an hour and a half, then spend the next two hours thawing over a floor register where we related our adventures.

Our son was four years old and knew all about Santa. In fact we had two Christmases, one under our home tree and the second under the big family tree in Royal Oak. On this Christmas Eve we drove east on Michigan Ave. to Canton Center Rd, not meeting a dozen cars. On Canton Center there were no cars at all to Plymouth. That city's lights were dim, but the trees in windows were brilliant with lights.

Soon we were off onto the unpaved roads with 30 lonely miles ahead.

Two miles north we came to a pond, a pint-size lake. we turned right, then left and then right. It couldn't have been a mile before we came to a cross road and a new sign “STOP!” dutifully we pressed both the gear-pedal and brake pedal. This caused our engine to race and the lights to brighten.

From the door of a darkened house, with our lights full upon him, there came a genuine Santa with sack over his back.

Stealthily he closed a kitchen door and ran across a stubblefield. He stared at us and waved, and his wave told us that he wanted us to turn out our lights, a large tree in the window, and with astonishment at really seeing Santa, we idled our motor till our lights gave out only a dull red glow.

Meanwhile, Santa made his way across the field till he reached the porch of the lighted house.

We had to get going, we were cold. When we pressed the “low” pedal our brights brightened and Santa, grateful for the moment of low illumination, waved us a Merry, Merry Christmas.

As we passed the lighted house, a window was thrown open. We heard Santa shout “Ho-Ho-Ho!” as he climbed in, across the low sill. We could see heads of several tots.

No need to explain to our 4 year old son. He'd seen Santa. An hour later, we stood over a floor register, relating to a dozen youngsters what had happened.

“Did we see reindeers? Did both houses have chimneys?” they asked, I explained that Santa was an opportunist or he'd never get around on Christmas Eve.

Yes, Virginia, there is a Santa Claus. We can describe his costume head to foot.

This story was written by J. Milton Barnes in 1970 for the Ypsilanti Press. As a columnist he wrote more than 750 columns for the paper and said to be “The Man with the Marvelous Memory”. Mr. Barnes passed away in 1985 at the age of 91.