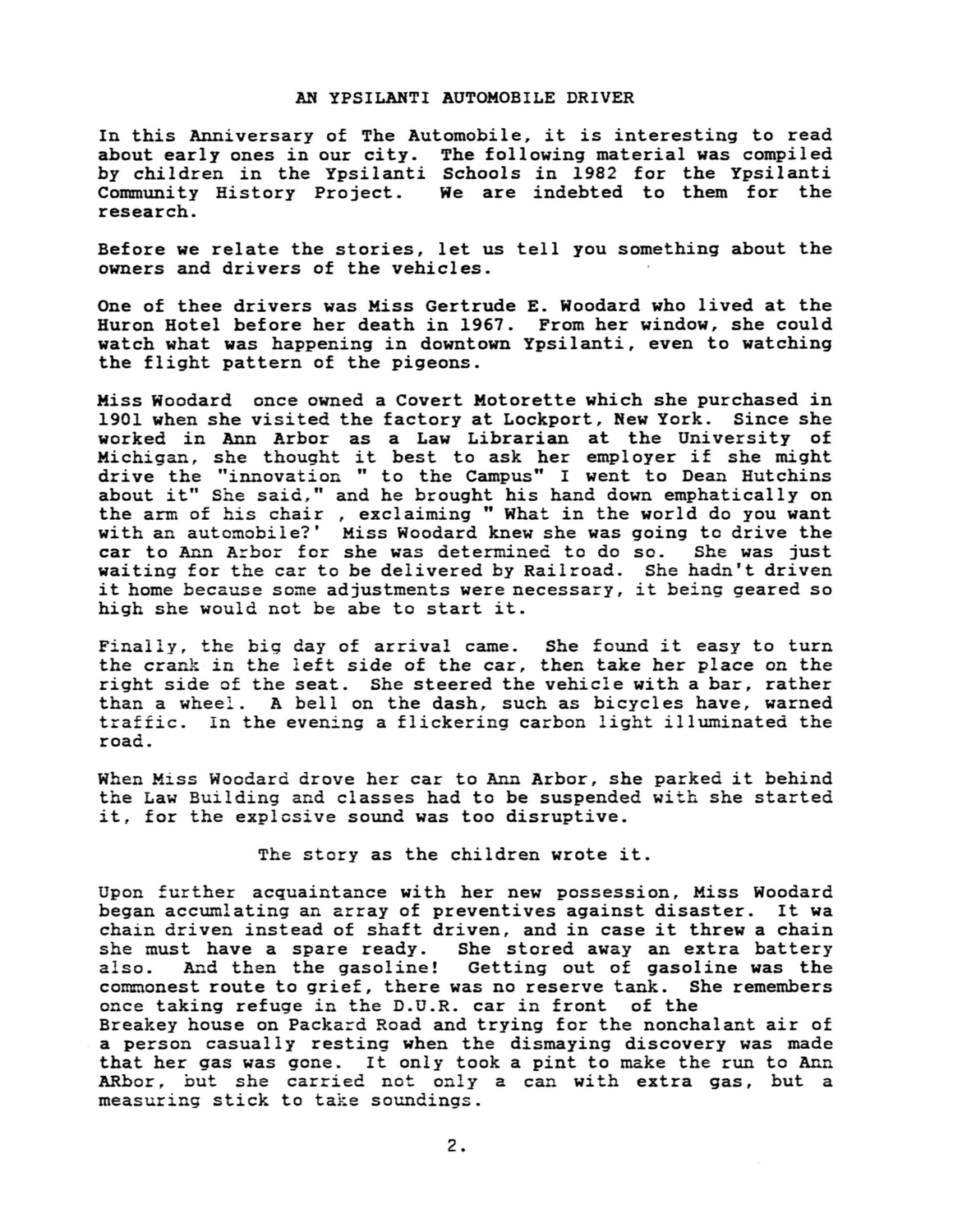 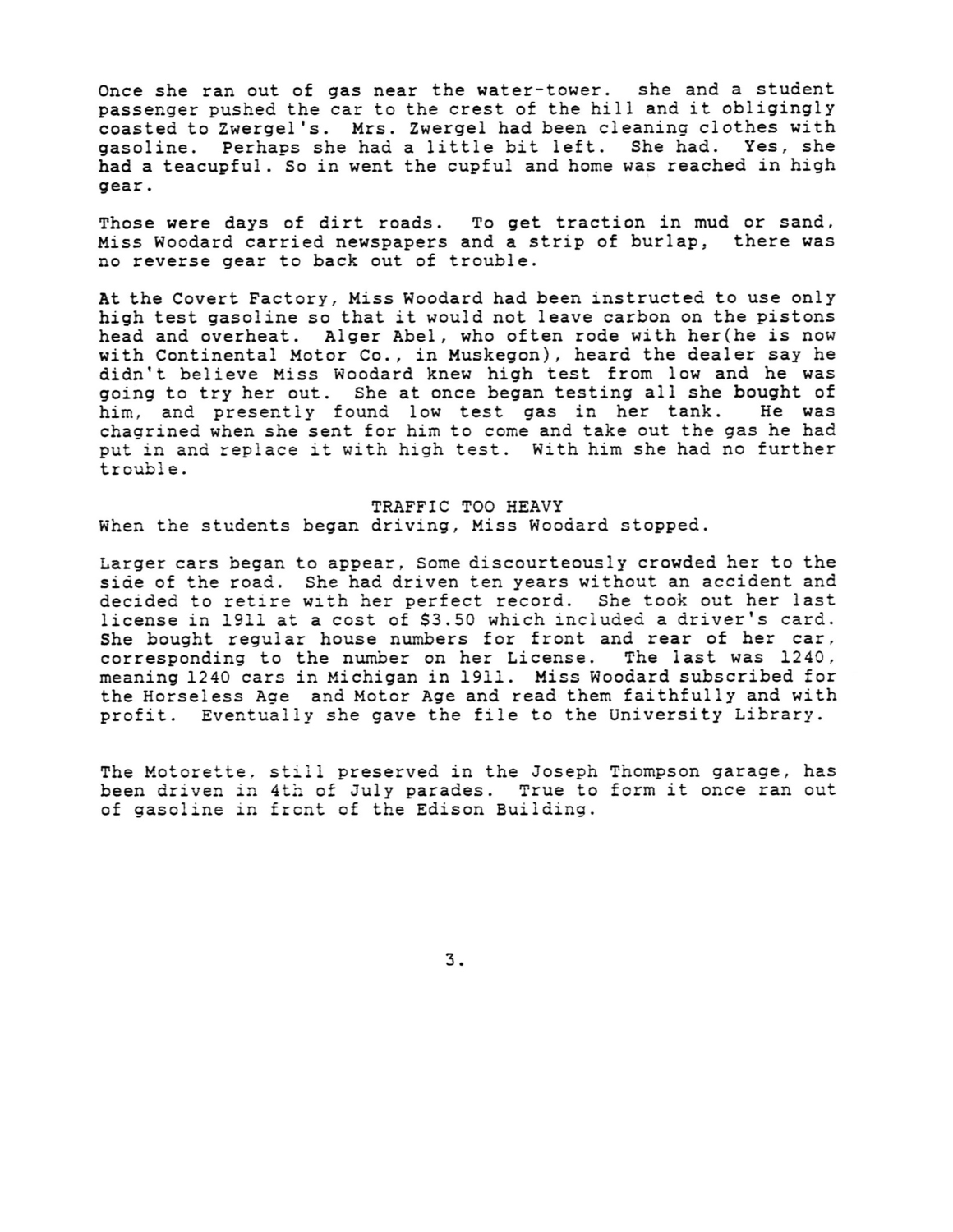 In this Anniversary of The Automobile, it is interesting to read about early ones in our city. The following material was compiled by children in the Ypsilanti Schools in 1982 for the Ypsilanti Community History Project. We are indebted to them for the research.

Before we relate the stories, let us tell you something about the owners and drivers of the vehicles.

One of thee drivers was Miss Gertrude E. Woodard who lived at the Huron Hotel before her death in 1967. From her window, she could watch what was happening in downtown Ypsilanti, even to watching the flight pattern of the pigeons.

Miss Woodard once owned a Covert Motorette which she purchased in 1901 when she visited the factory at Lockport, New York. Since she worked in Ann Arbor as a Law Librarian at the University of Michigan, she thought it best to ask her employer if she might drive the “innovation “to the Campus” I went to Dean Hutchins about it” She said,” and he brought his hand down emphatically on the arm of his chair, exclaiming “ What in the world do you want with an automobile?' Miss Woodard knew she was going to drive the car to Ann Arbor for she was determined to do so. She was just waiting for the car to be delivered by Railroad. She hadn't driven it home because some adjustments were necessary, it being geared so high she would not be abe to start it.

Finally, the big day of arrival came. She found it easy to turn the crank in the left side of the car, then take her place on the right side of the seat. She steered the vehicle with a bar, rather than a wheel. A bell on the dash, such as bicycles have, warned traffic. In the evening a flickering carbon light illuminated the road.

When Miss Woodard drove her car to Ann Arbor, she parked it behind the Law Building and classes had to be suspended with she started it, for the explosive sound was too disruptive.

The story as the children wrote it.

Upon further acquaintance with her new possession, Miss Woodard began accumlating an array of preventives against disaster. It wa chain driven instead of shaft driven, and in case it threw a chain she must have a spare ready. She stored away an extra battery also. And then the gasoline! Getting out of gasoline was the commonest route to grief, there was no reserve tank. She remembers once taking refuge in the D.U.R. car in front of the Breakey house on Packard Road and trying for the nonchalant air of a person casually resting when the dismaying discovery was made that her gas was gone. It only took a pint to make the run to Ann ARbor, but she carried not only a can with extra gas, but a measuring stick to take soundings.

Once she ran out of gas near the water-tower. she and a student passenger pushed the car to the crest of the hill and it obligingly coasted to Zwergel's. Mrs. Zwergel had been cleaning clothes with gasoline. Perhaps she had a little bit left. She had. Yes, she had a teacupful. So in went the cupful and home was reached in high gear.

Those were days of dirt roads. To get traction in mud or sand, Miss Woodard carried newspapers and a strip of burlap, there was no reverse gear to back out of trouble.

At the Covert Factory, Miss Woodard had been instructed to use only high test gasoline so that it would not leave carbon on the pistons head and overheat. Alger Abel, who often rode with her (he is now with Continental Motor Co., in Muskegon), heard the dealer say he didn't believe Miss Woodard knew high test from low and he was going to try her out. She at once began testing all she bought of him, and presently found low test gas in her tank. He was chagrined when she sent for him to come and take out the gas he had put in and replace it with high test. With him she had no further trouble.

Larger cars began to appear, Some discourteously crowded her to the side of the road. She had driven ten years without an accident and decided to retire with her perfect record. She took out her last license in 1911 at a cost of &dollar;3.50 which included a driver's card. She bought regular house numbers for front and rear of her car, corresponding to the number on her License. The last was 1240, meaning 1240 cars in Michigan in 1911. Miss Woodard subscribed for the Horseless Age and Motor Age and read them faithfully and with profit. Eventually she gave the file to the University Library.

The Motorette, still preserved in the Joseph Thompson garage, has been driven in 4th of July parades. True to form it once ran out of gasoline in front of the Edison Building.