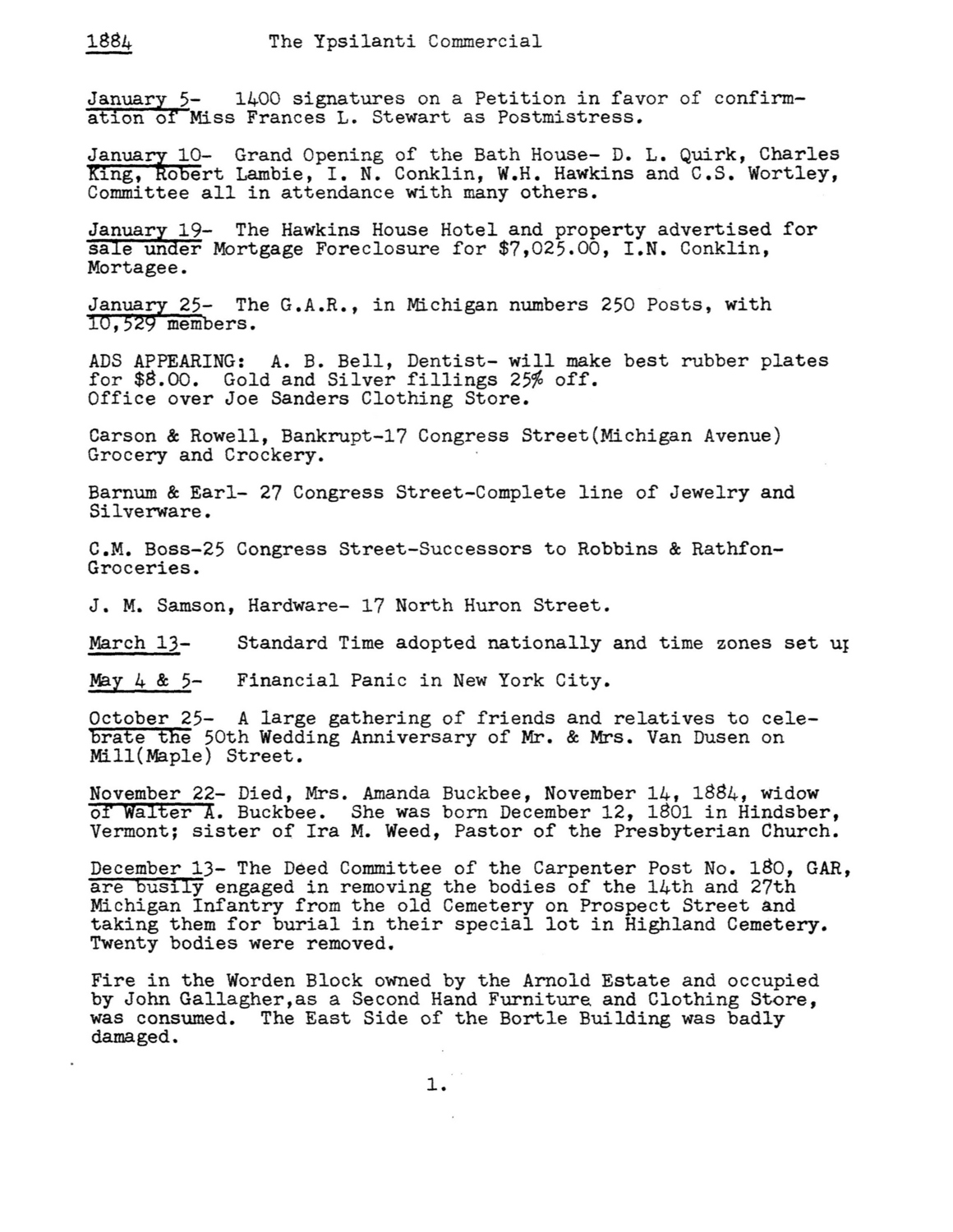 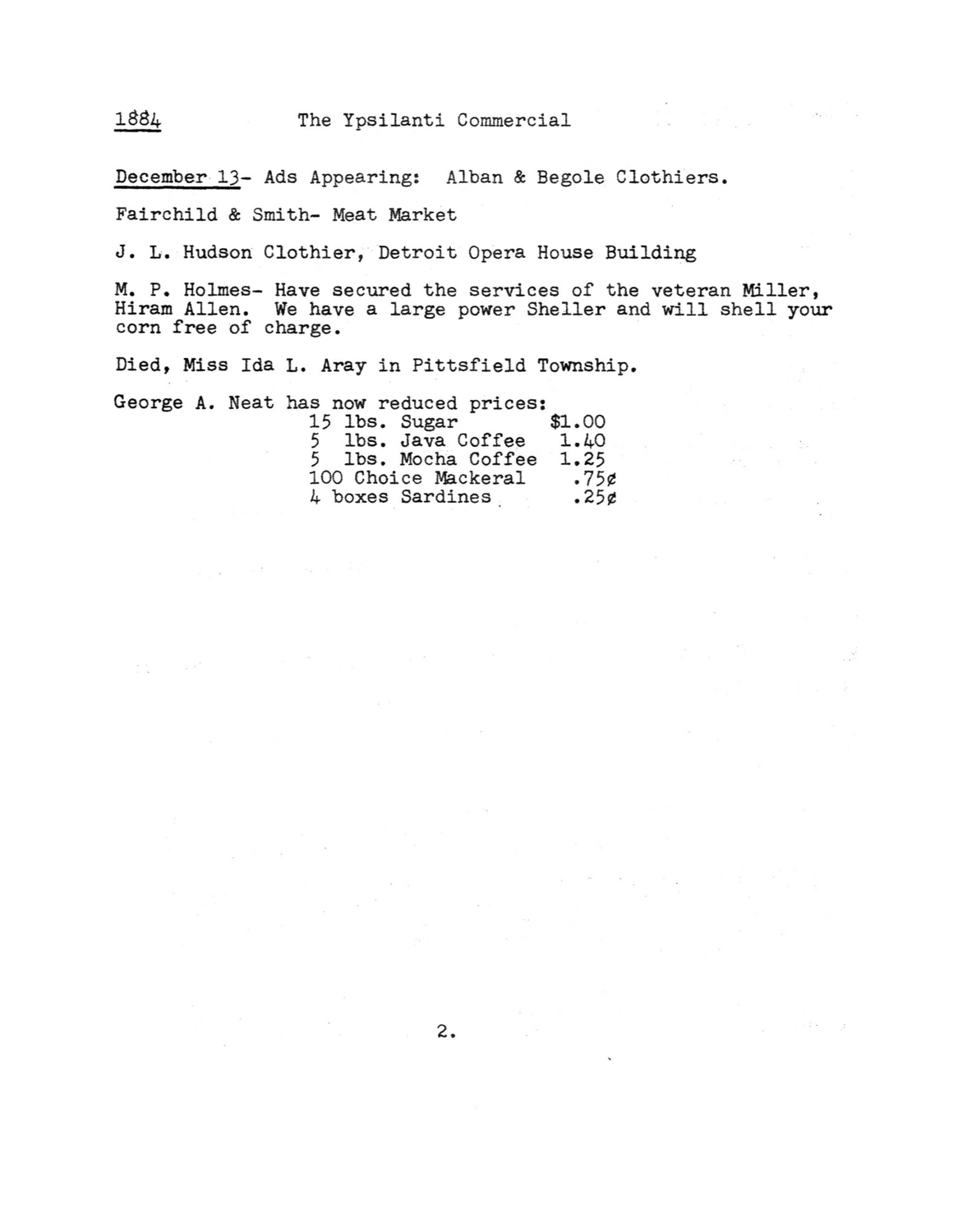 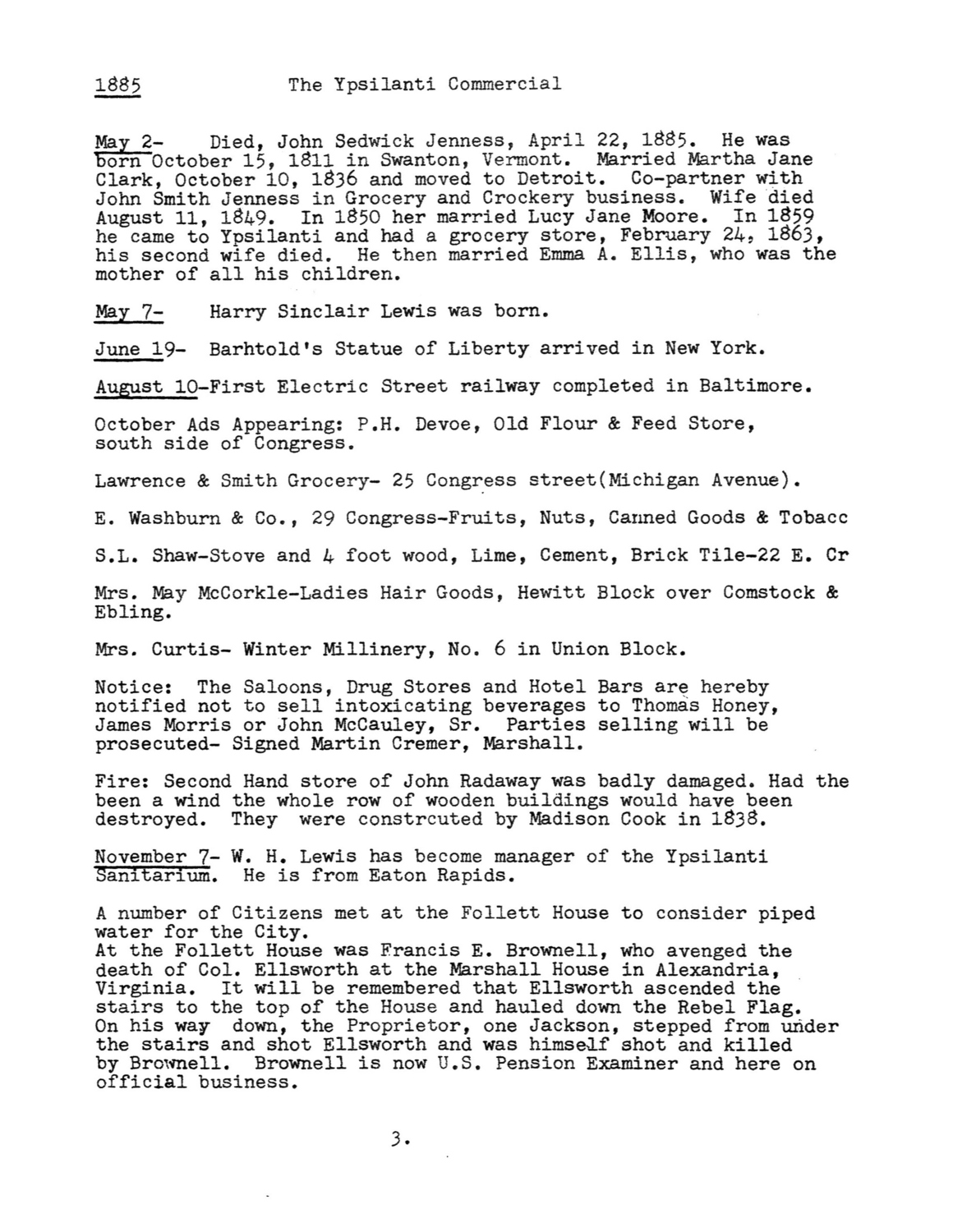 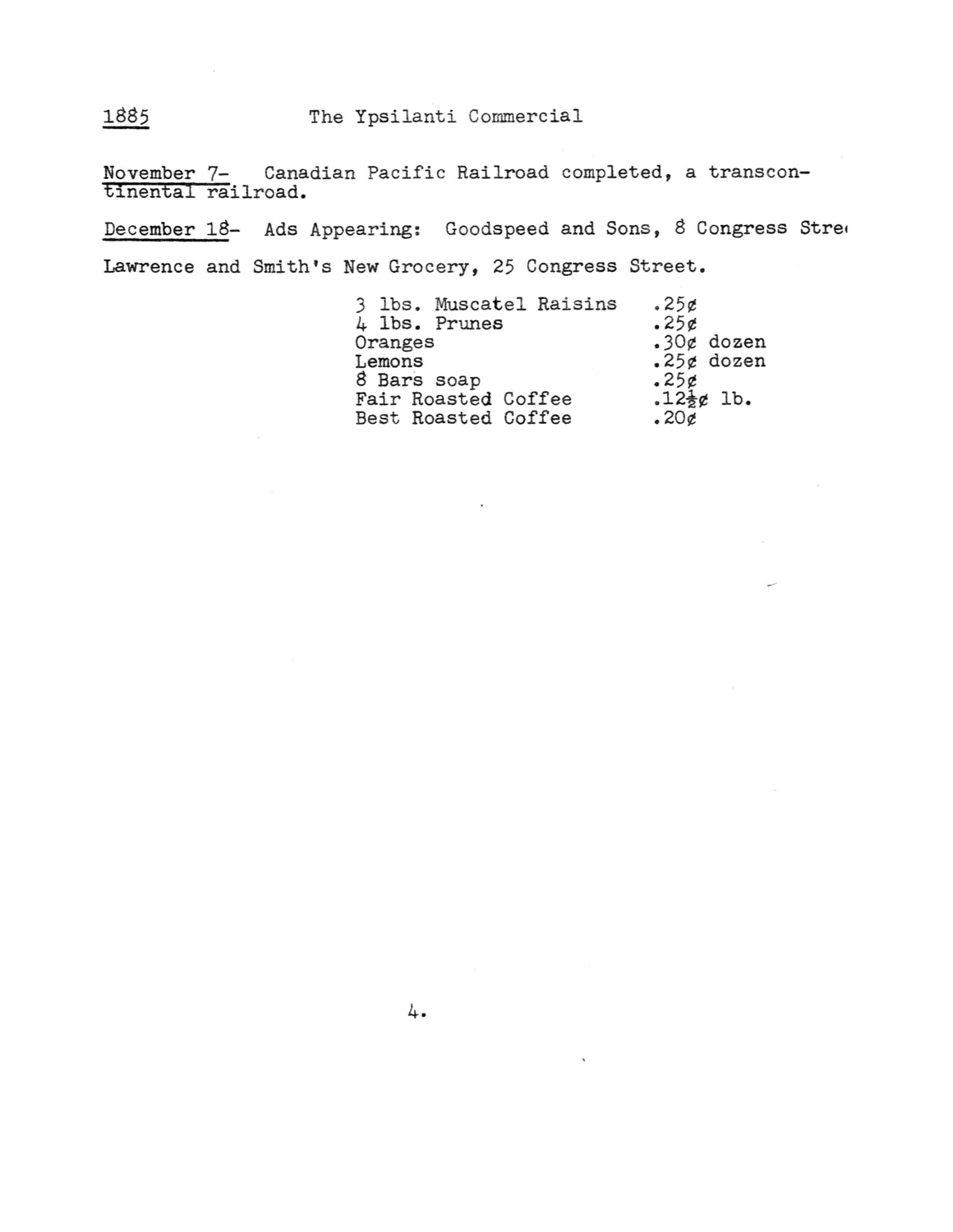 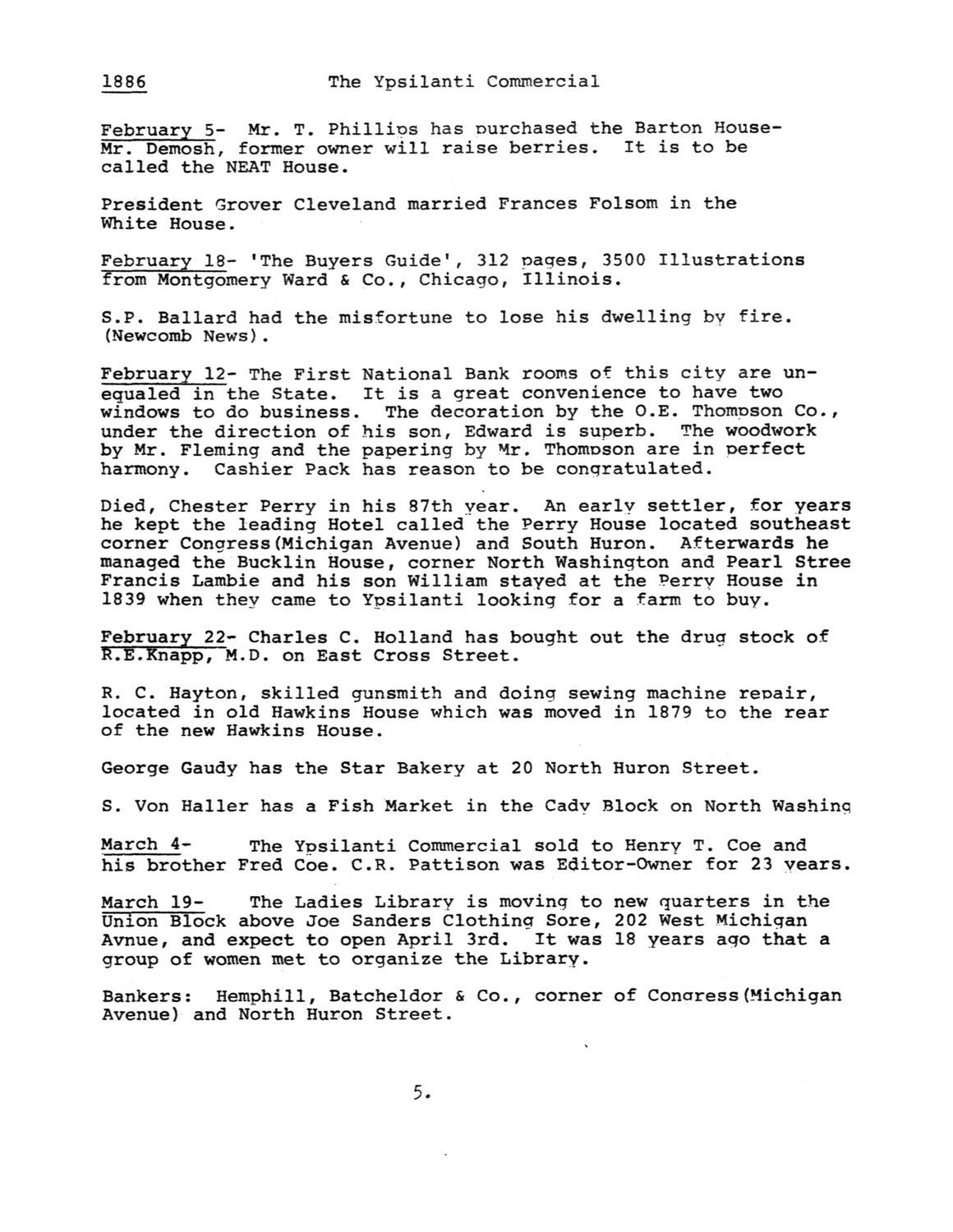 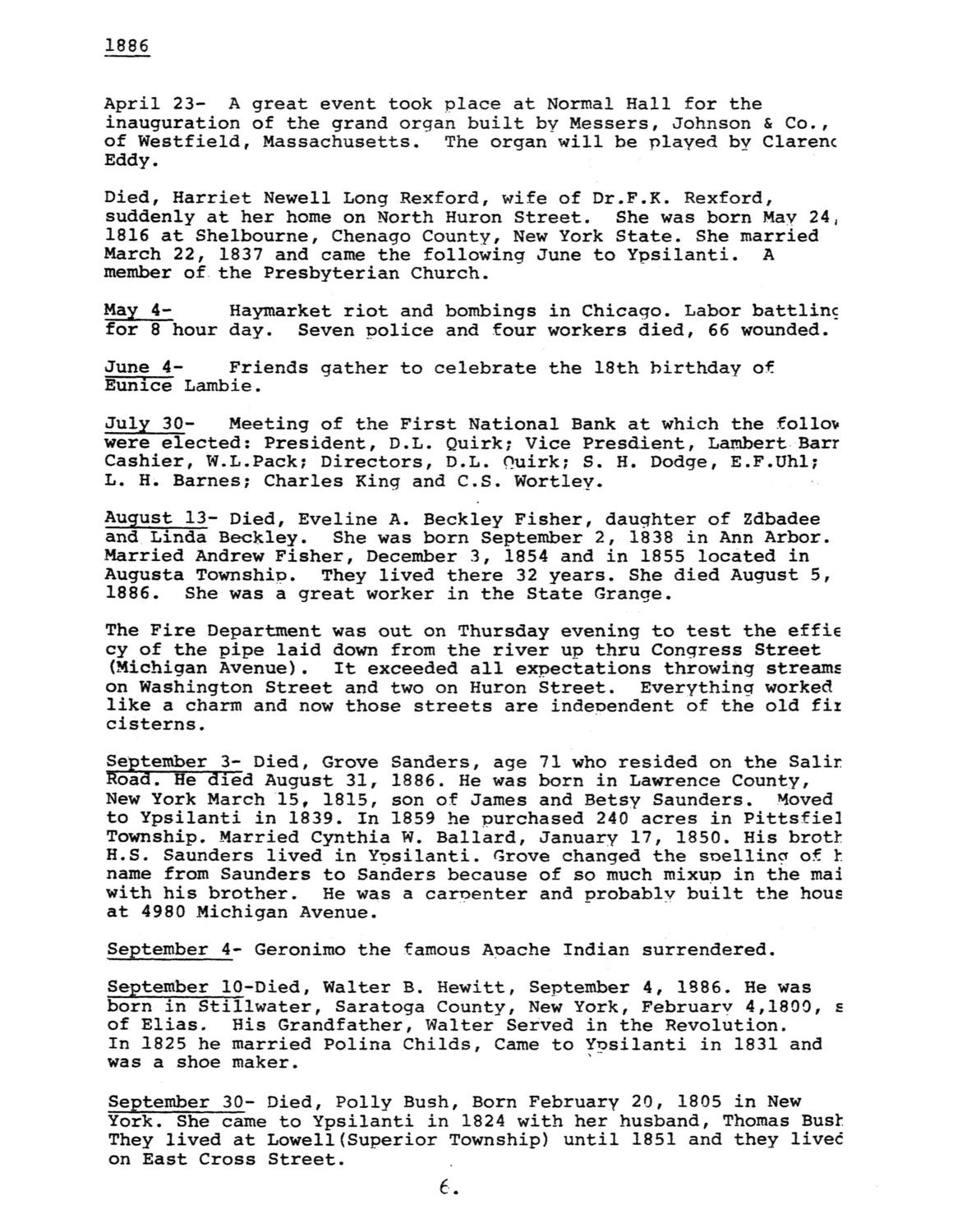 January 5- 1400 signatures on a Petition in favor of confirmation of Miss Frances L. Stewart as Postmistress.

January 10- Grand Opening of the Bath House-D. L. Quirk, Charles King, Robert Lambie, I. N. Conklin, W. H. Hawkins and C.S. Wortley, Committee all in attendance with many others.

October 25- A large gathering of friends and relatives to celebrate the 50th Wedding Anniversary of Mr. & Mrs. Van Dusen on Mill (Maple) Street.

December 13- The Deed Committee on the Carpenter Post No. 180, GAR, are busily engaged in removing the bodies of the 14th and 27th Michigan Infantry from the old Cemetery on Prospect Street and taking them for burial in their special lot in Highland Cemetery. Twenty bodies were removed.

Fire in the Worden Block owned by the Arnold Estate and occupied by John Gallagher, as a Second Hand Furniture and Clothing Store, was consumed. The East Side of the Bortle Building was badly damaged.

M. P. Holmes-Have secured the services of the veteran Miller, Hiram Allen. We have a large power Sheller and will shell your corn free of charge.

May 7- Harry Sinclair Lewis was born.

Fire: Second Hand store of John Radaway was badly damaged. Had the been a wind the whole row of wooden buildings would have been destroyed. They were constructed by Madison Cook in 1838.

November 7- W. H. Lewis has become manager of the Ypsilanti Sanitarium. He is from Eaton Rapids.

A number of Citizens met at the Follett House to consider piped water for the City.

At the Follett House was Francis E. Brownell, who avenged the death of Col. Ellsworth at the Marshall House in Alexandria, Virginia. It will be remembered that Ellsworth ascended the stairs to the top of the House and hauled down the Rebel Flag. On his way down, the Proprietor, one Jackson, stepped from under the stairs and shot Ellsworth and was himself shot and killed by Brownell. Brownell is now U.S. Pension Examiner and here on official business.

February 5- Mr. T. Phillips has purchased the Barton House-Mr. Demosh, former owner will raise berries. It is to be called the NEAT House.

S. P. Ballard had the misfortune to lose his dwelling by fire. (Newcomb News).

February 12- The First National Bank rooms of this city are unequaled in the State. It is a great convenience to have two windows to do business. The decoration by the O.E. Thompson Co., under the direction of his son, Edward is superb. The woodwork by Mr. Fleming and the papering by Mr. Thompson are in perfect harmony. Cashier Pack has reason to be congratulated.

Died, Chester Perry in his 87th year. An early settler, for years he kept the leading Hotel called the Perry House located southeast corner Congress (Michigan Avenue) and South Huron. Afterwards he managed the Bucklin House, corner North Washington and Pearl Stree Francis Lambie and his son William stayed at the Perry House in 1839 when they came to Ypsilanti looking for a farm to buy.

R. C. Hayton, skilled gunsmith and doing sewing machine repair, located in old Hawkins House which was moved in 1879 to the rear of the new Hawkins House.

George Gaudy has the Star Bakery at 20 North Huron Street.

S. Von Haller has a Fish Market in the Cady Block on North Washing

March 19- The Ladies Library is moving to new quarters in the Union Block above Joe Sanders Clothing Sore, 202 West Michigan Avnue, and expect to open April 3rd. It was 18 years ago that a group of women met to organize the Library.

April 23-A great event took place at Normal Hall for the inauguration of the grand organ built by Messers, Johnson & Co., of Westfield, Massachusetts. The organ will be played by Clarenc Eddy.

Died, Harriet Nawell Long Rexford, wife of Dr. F. K. Rexford, suddenly at her home on North Huron Street. She was born May 24, 1816 at Shelbourne, Chenago County, New York State. She married March 22, 1837 and came the following June to Ypsilanti. A member of the Presbyterian Church.

August 13- Died, Eveline A. Beckley fisher, daughter of Zdbadee and Linda Beckley. She was born September 2, 1838 in Ann Arbor. Married Andrew Fisher, December 3, 1854 and in 1855 located in Augusta Township. They lived there 32 years. She died August 5, 1886. She was a great worker in the State Grange.

The fire Department was out on Thursday evening to test the effiecy of the pipe laid down from the river up thru Congress Street (Michigan Avenue). It exceeded all expectations throwing streams on Washington Street and two on Huron Street. Everything worked like a charm and now those streets are independent of the old fir cisterns.

September 3- Died, Grove Sanders, age 71 who resided on the Salin Road. He died August 31, 1886. He was born in Lawrence County, New York March 15, 1815, son of James and Betsy Saunders. Moved to Ypsilanti in 1839. In 1859 he purchased 240 acres in Pittsfiel Township. Married Cynthia W. Ballard, January 17, 1850. His broth H.S. Saunders lived in Ypsilanti. Grove changed the spelling of h name from Saunders to Sanders because of so much mixup in the mai with his brother. He was a carpenter and probably built the house at 4980 Michigan Avenue.

September 10-Died, Walter B. Hewitt, September 4, 1886. He was born in Stillwater, Saratoga County, New York, February 4, 1800, s of Elias. His Grandfather, Walter Served in the Revolution. In 1825 he married Polina Childs, Came to Ypsilanti in 1831 and was a shoe maker.

September 30- Died, Polly Bush, Born February 20, 1805 in New York. She came to Ypsilanti in 1824 with her husband, Thomas Bush They lived at Lowell (Superior Township) until 1851 and they lived on East Cross Street.

November 12- Trim & McGregor of Detroit have bought out Born & Mapes.

Died, Samuel Robbins. He was born October 20, 1806 in Harvard, Worchester County, Massachusetts. Came to Michigan in 1869. He was a Presbyterian but turned to the Methodists during a Revival Meeting. Married Rachael Mersereau in 1829. She died in 1862 and he then married Rebecca Swift in 1864.

December 3- Stevenson, the Photographer, has photographed Demetrius Ypsilanti and printed the pictures in various sizes. The Commercial Editor thinks every home in Ypsilanti should have one.

Banghart & Clark-South side of Congress

“Finest Meats of all kinds”