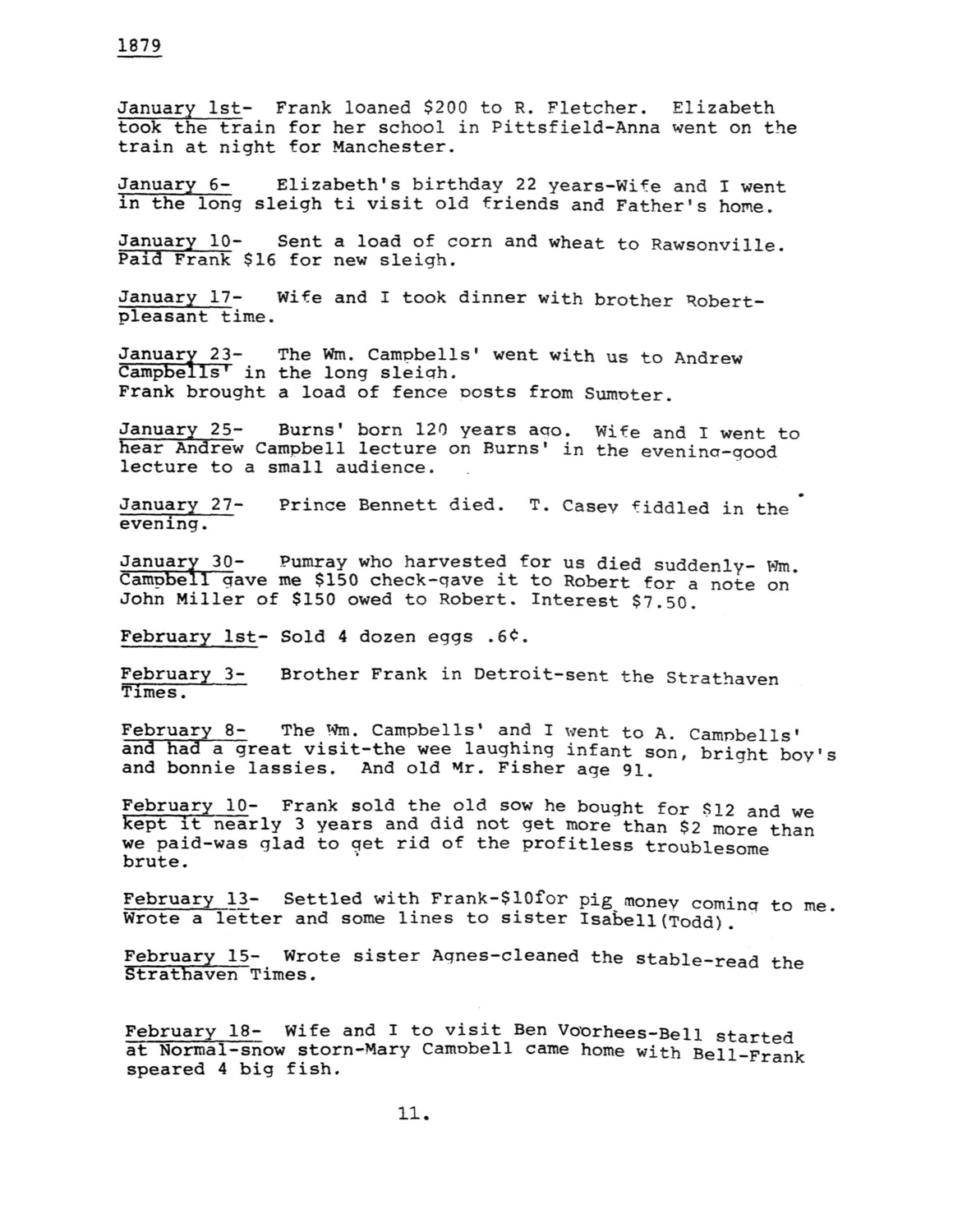 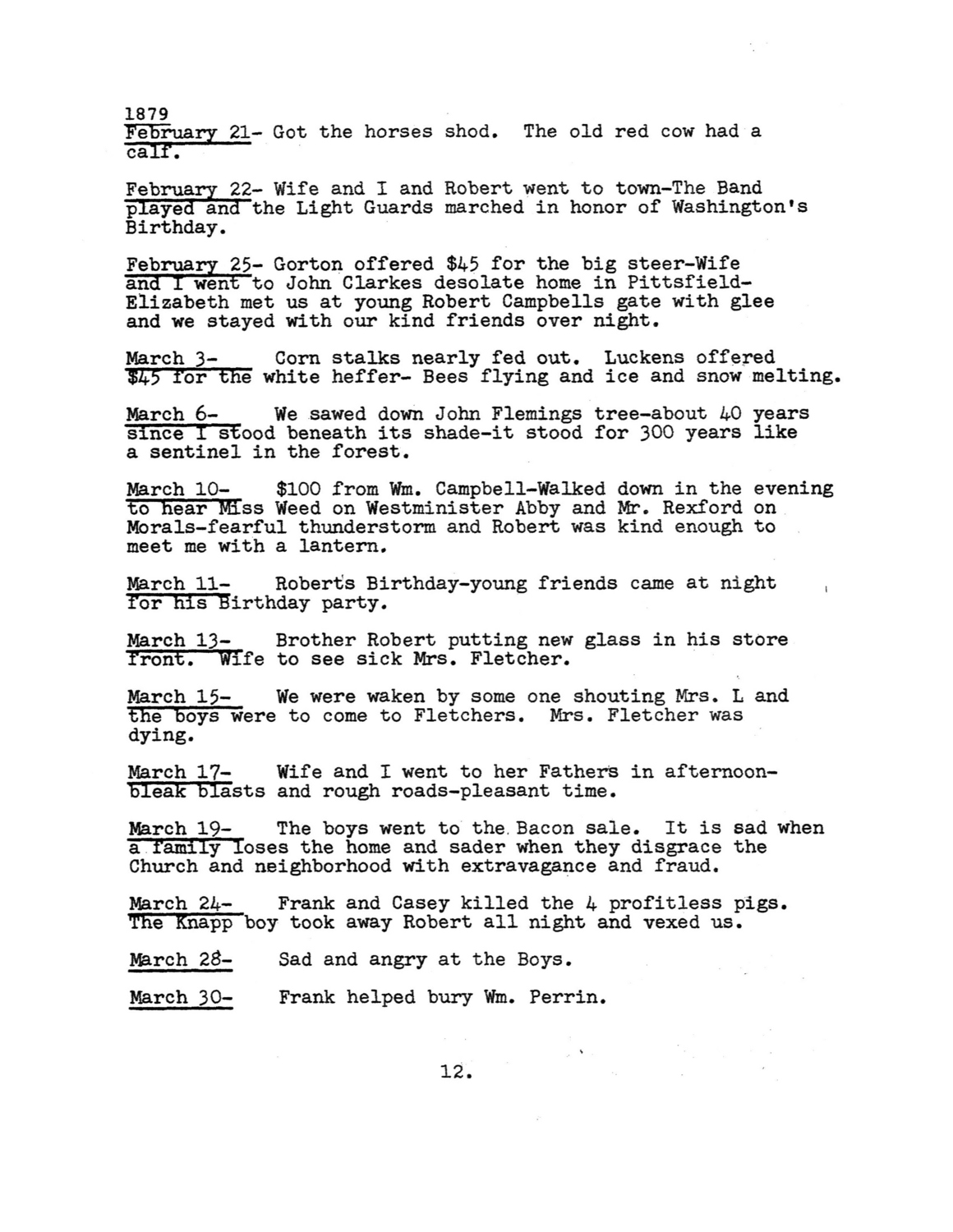 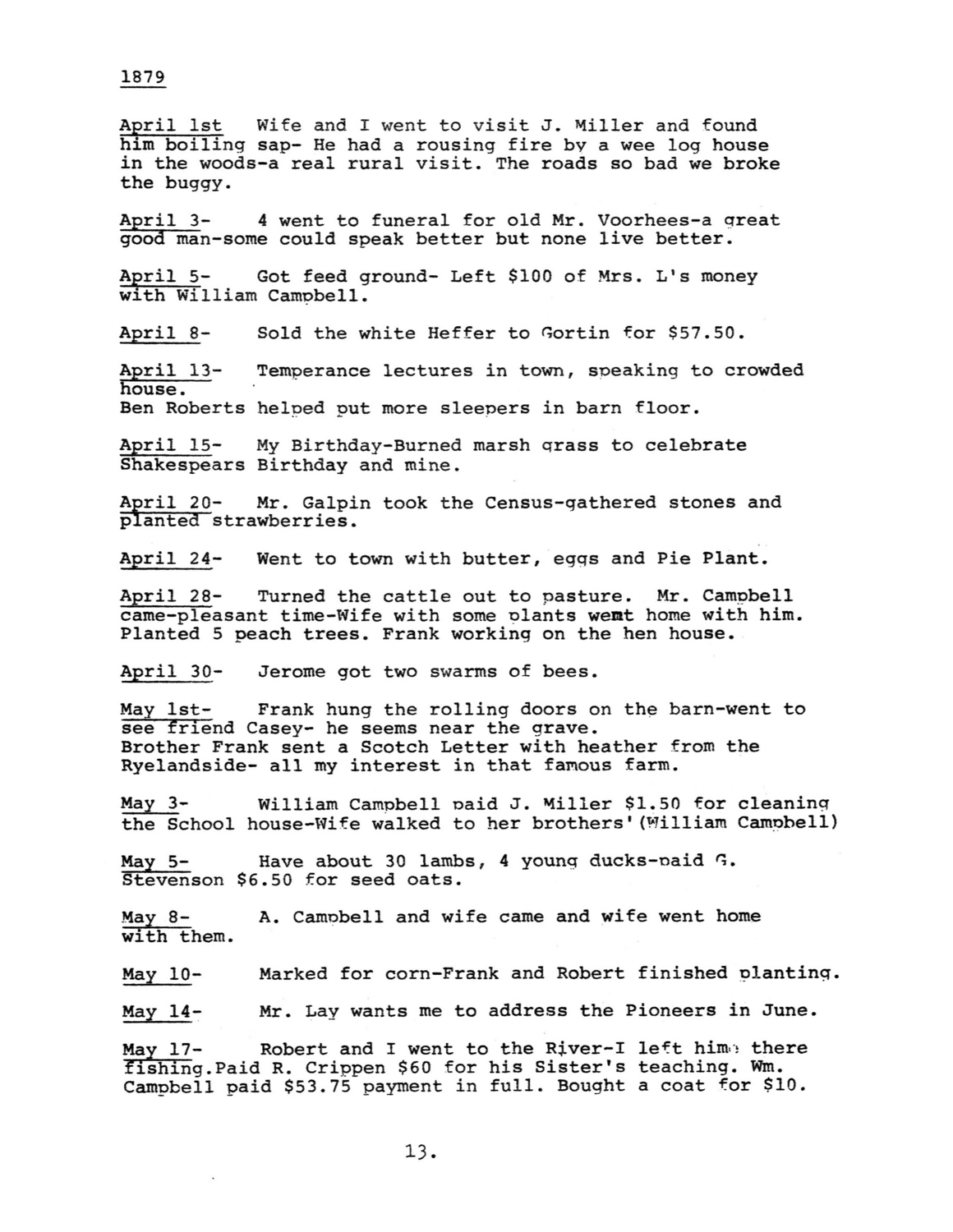 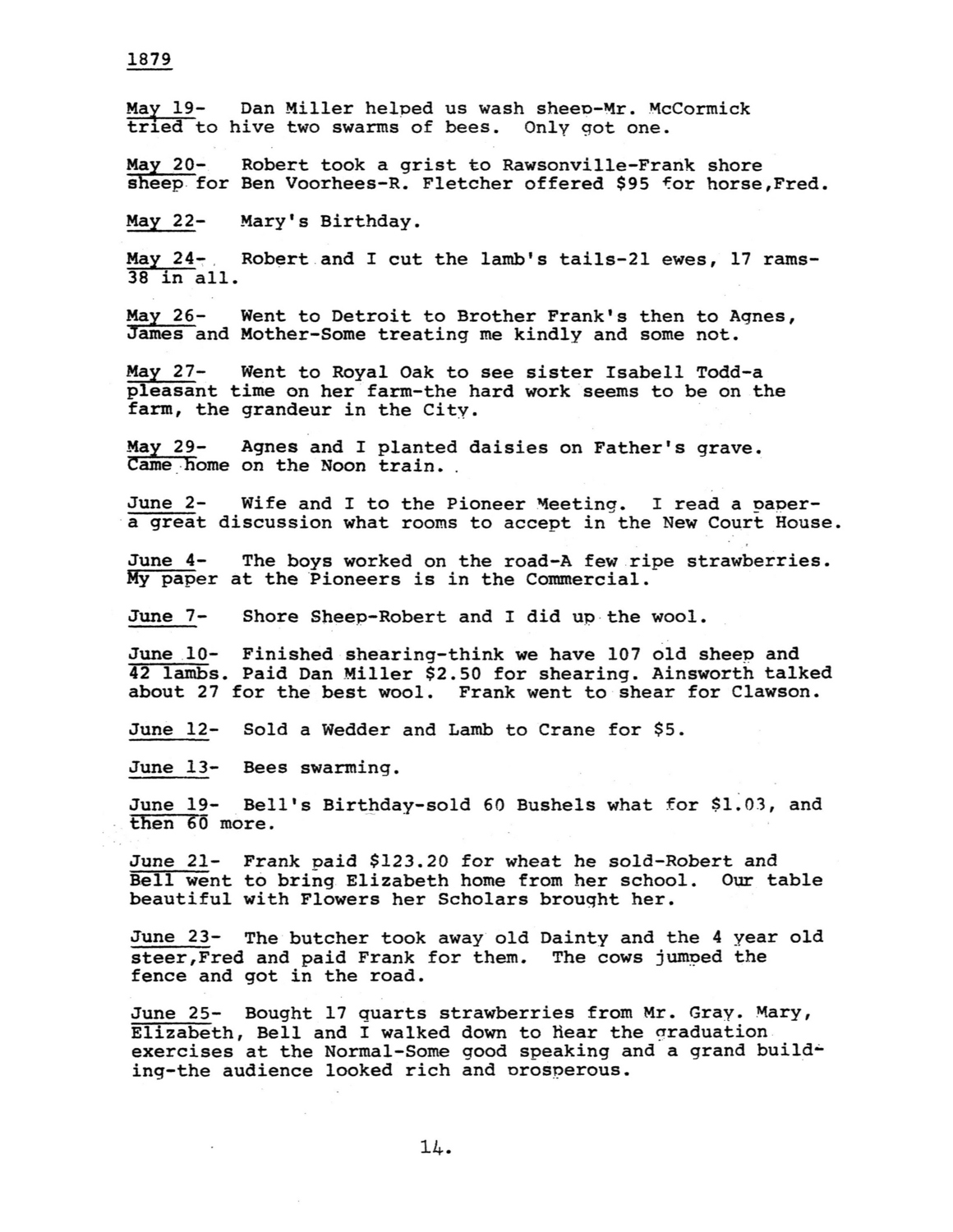 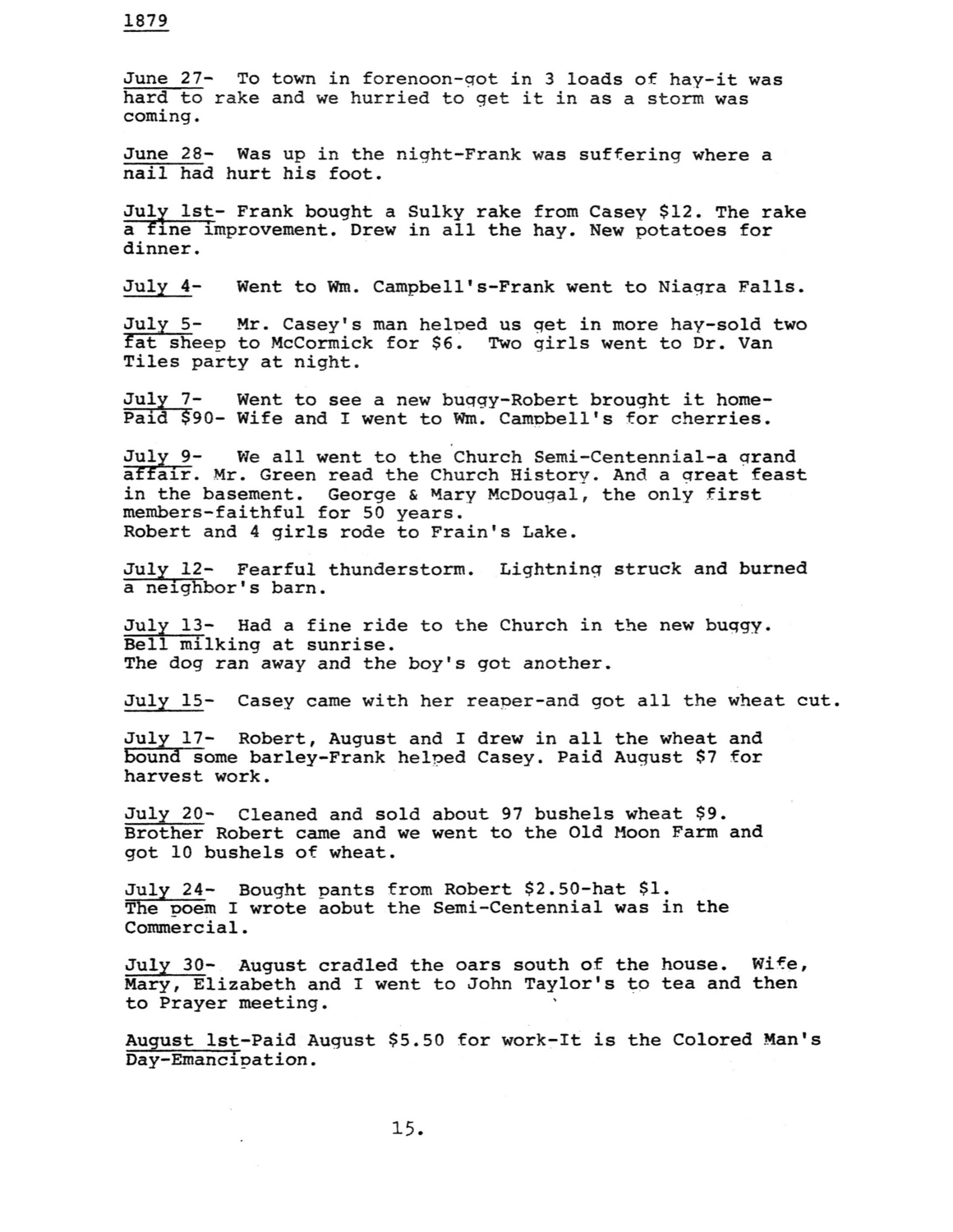 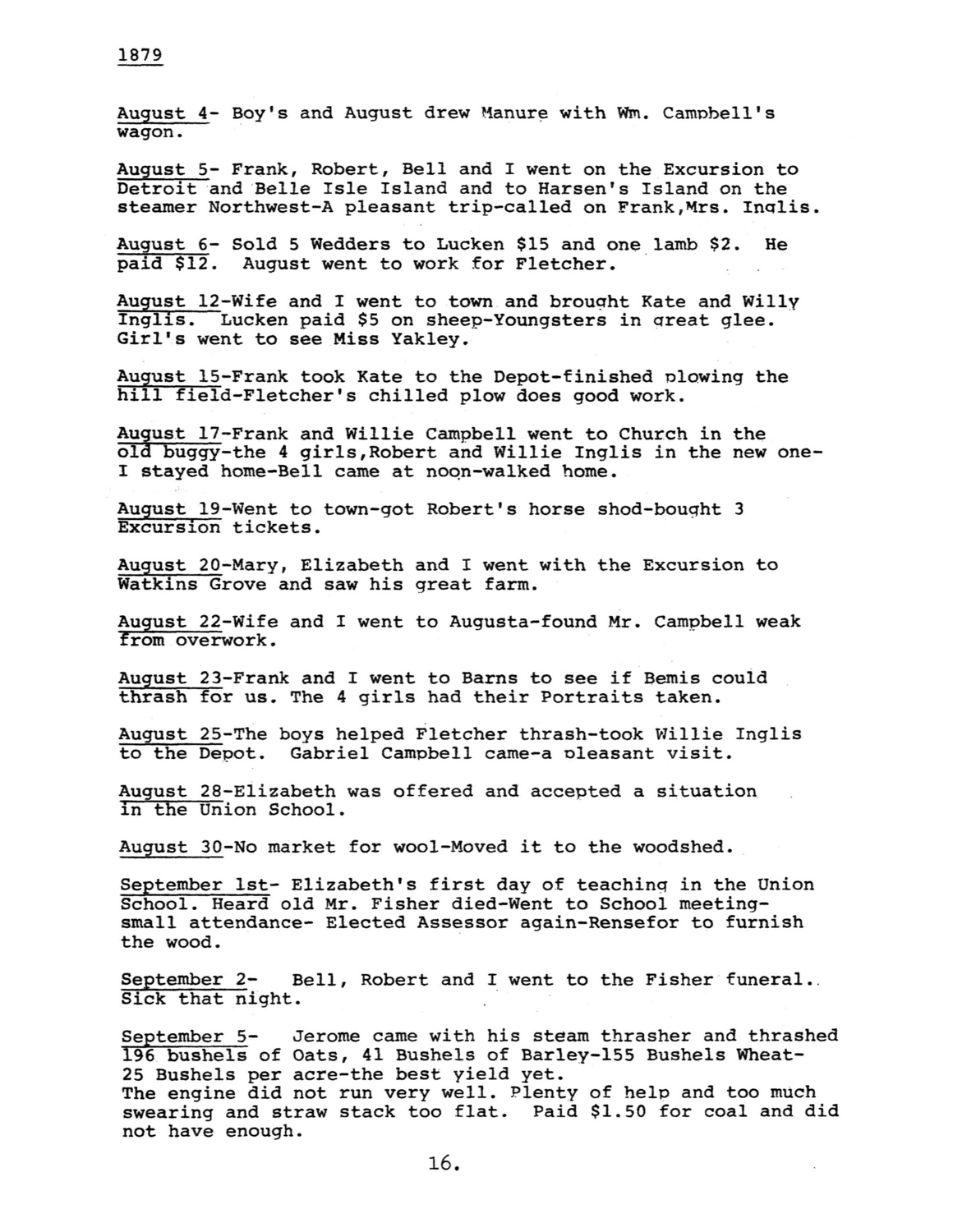 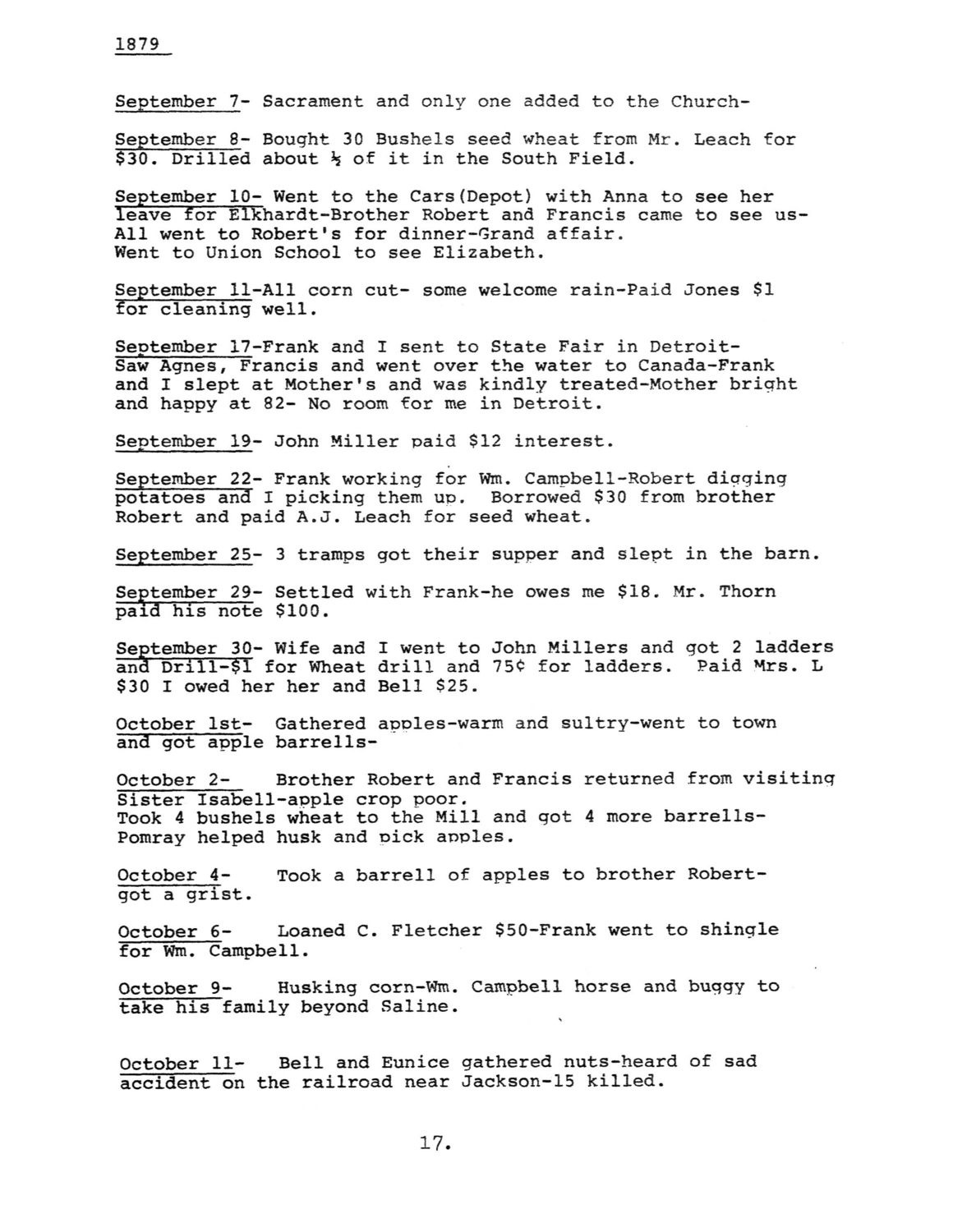 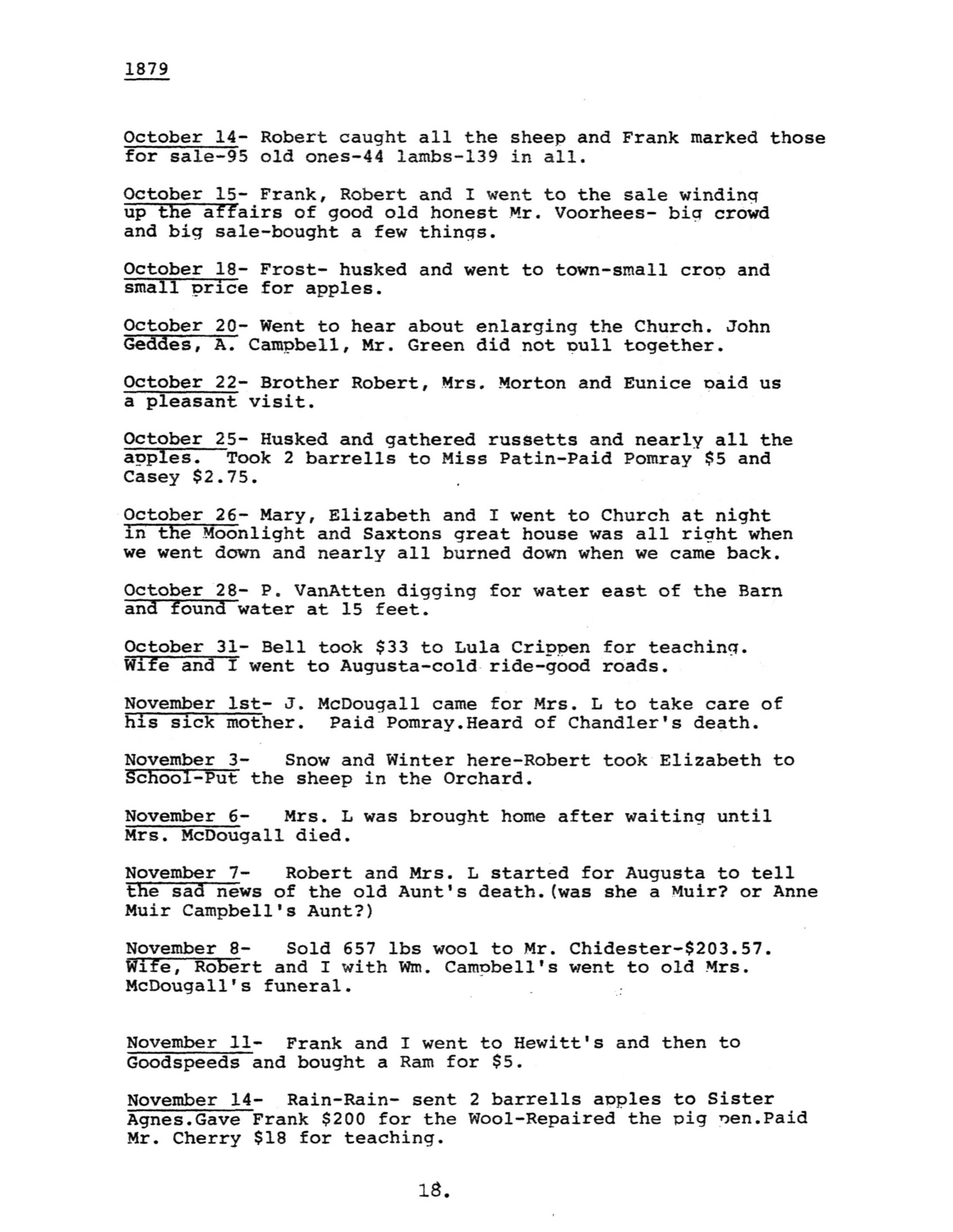 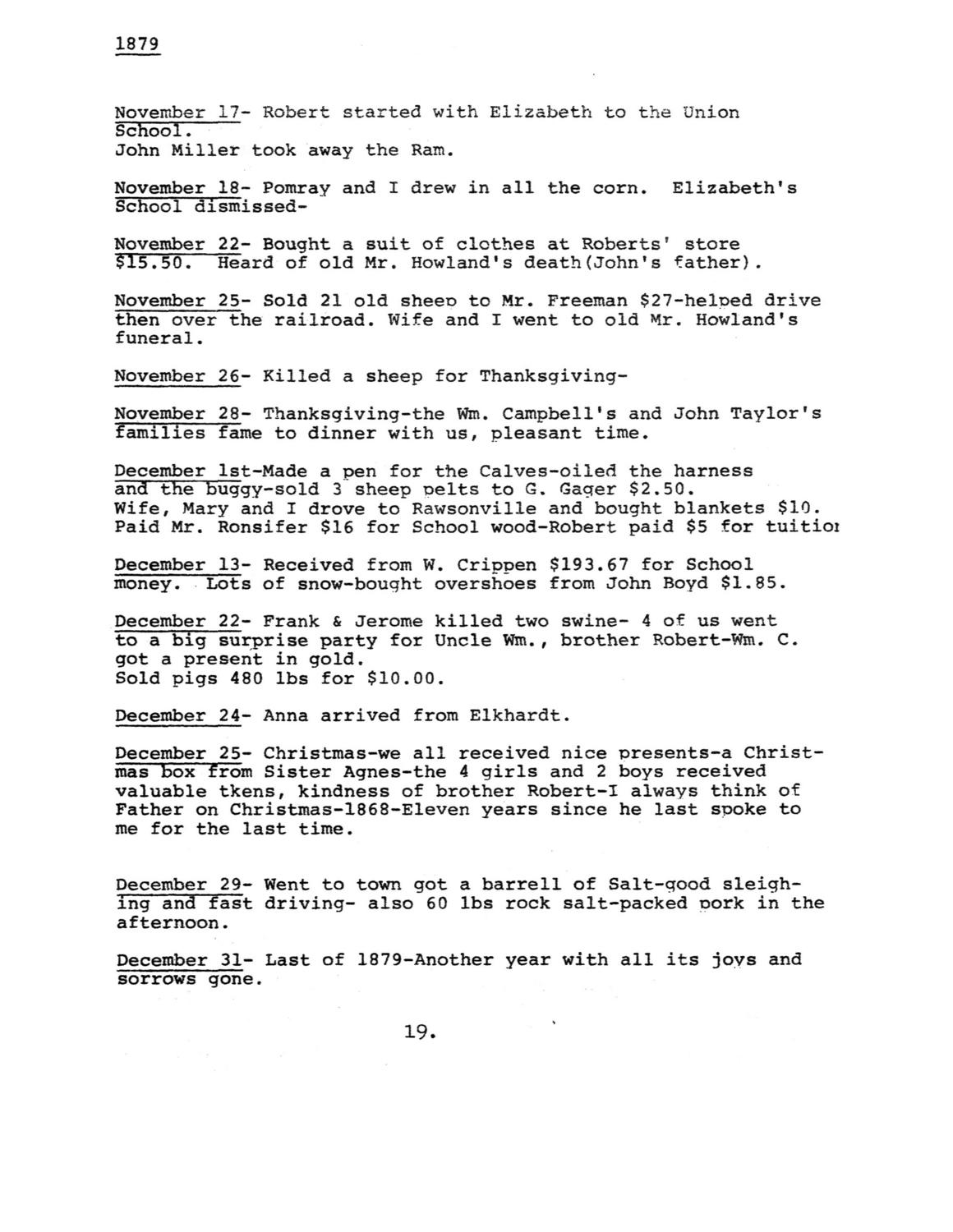 January 1st- Frank loaned &dollar;200 to R. Fletcher. Elizabeth took the train for her school in Pittsfield-Anna went on the train at night for Manchester.

January 10- Sent a load of corn and wheat to Rawsonville. Paid Frank &dollar;16 for new sleigh.

January 17- Wife and I took dinner with brother Robert-pleasant time.

January 23- The Wm. Campbells' went with us to Andrew Campbells' in the long sleigh.

Frank brought a load of fence posts from Sumoter.

January 25- Burns' born 120 years ago. Wife and I went to hear Andrew Campbell lecture on Burns' in the evening-good lecture to a small audience.

January 30- Pumray who harvested for us died suddenly-Wm. Campbell gave me &dollar;150 check-gave it to Robert for a note on John Miller of &dollar;150 owed to Robert. Interest &dollar;7.50.

February 8- The Wm. Campbells' and I went to A. Campbells' and had a great visit-the wee laughing infant son, bright boy's and bonnie lassies. And old Mr. Fisher age 91.

February 10- Frank sold the old sow he bought for &dollar;12 and we kept it nearly 3 years and did not get more than &dollar;2 more than we paid-was glad to get rid of the profitless troublesome brute.

February 13- Settled with Frank-&dollar;10 for pig money coming to me. Wrote a letter and some lines to sister Isabell (Todd).

February 21- Got the horses shod. The old red cow had a calf.

February 22- Wife and I and Robert went to town-The Band played and the Light Guards marched in honor of Washington's Birthday.

February 25- Gorton offered &dollar;45 for the big steer-Wife and I went to John Clarkes desolate home in Pittsfield-Elizabeth met us at young Robert Campbells gate with glee and we stayed with our kind friends over night.

March 6- We sawed down John Flemings tree-about 40 years since I stood beneath its shade-it stood for 300 years like a sentinel in the forest.

March 10- &dollar;100 from Wm. Campbell-Walked down in the evening to hear Miss Weed on Westminster Abby and Mr. Rexford on Morals-fearful thunderstorm and Robert was kind enough to meet me with a lantern.

March 15- We were waken by some one shouting Mrs. L and the boys were to come to Fletchers. Mrs. Fletcher was dying.

March 17- Wife and I went to her Fathers in afternoon-bleak blasts and rough roads-pleasant time.

March 19- The boys went to the Bacon sale. It is sad when a family loses the home and sader when they disgrace the Church and neighborhood with extravagance and fraud.

March 24- Frank and Casey killed the 4 profitless pigs. The Knapp boy took away Robert all night and vexed us.

April 1st Wife and I went to visit J. Miller and found him boiling sap-He had a rousing fire by a wee log house in the woods-a real rural visit. The roads so bad we broke the buggy.

April 15- My Birthday-Burned marsh grass to celebrate Shakespeare's Birthday and mine.

April 24- Went to town with butter, eggs and Pie Plant.

April 28- Turned the cattle out to pasture. Mr. Campbell came-pleasant time-Wife with some plants went home with him. Planted 5 peach trees. Frank working on the hen house.

May 1st- Frank hung the rollings doors on the barn-went to see friend Casey-he seems near the grave.

Brother Frank sent a Scotch Letter with heather from the Ryelandside-all my interest in that famous farm.

May 8- A. Campbell and wife came and wife went home with them.

May 10- Marked for corn-Frank and Robert finished planting.

May 14- Mr. Lay wants me to address the Pioneers in June.

May 17- Robert and I went to the River-I left him there fishing. Paid R. Crippen &dollar;60 for his Sister's teaching. Wm. Campbell paid &dollar;53.75 payment in full. Bought a coat for &dollar;10.

May 19- Dan Miller helped us wash sheep-Mr. McCormick tried to hive two swarms of bees. Only got one.

May 26- Went to Detroit to Brother Frank's then to Agnes, James and Mother-Some treating me kindly and some not.

May 27- Went to Royal Oak to see sister Isabell Todd-a pleasant time on her farm-the hard work seems to be on the farm, the grandeur in the City.

May 29- Agnes and I planted daisies on Father's grave.

Came home on the Noon train.

June 2- Wife and I to the Pioneer Meeting. I read a paper-a great discussion what rooms to accept in the New Court House.

June 4- The boys worked on the road-A few ripe strawberries. My paper at the Pioneers is in the Commercial.

June 7- Shore Sheep-Robert and I did up the wool.

June 10- Finished shearing-think we have 107 old sheep and 42 lambs. Paid Dan Miller &dollar;2.50 for shearing. Ainsworth talked about 27 for the best wool. Frank went to shear for Clawson.

June 21- Frank paid &dollar;123.20 for wheat he sold-Robert and Bell went to bring Elizabeth home from her school. Our table beautiful with Flowers her Scholars brought her.

June 23- The butcher took away old Dainty and the 4 year old steer, Fred and paid Frank for them. The cows jumped the fence and got in the road.

June 25- Bought 17 quarts strawberries from Mr. Gray. Mary, Elizabeth, Bell and I walked down to hear the graduation exercises at the Normal-Some good speaking and a grand building-the audience looked rich and prosperous.

June 27- To town in forenoon-got in 3 loads of hay-it was hard to rake and we hurried to get it in as a storm was coming.

June 28- Was up in the night-Frank was suffering where a nail had hurt his foot.

July 1st- Frank bought a Sulky rake from Casey &dollar;12. The rake a fine improvement. Drew in all the hay. New Potatoes for dinner.

July 7- Went to see a new buggy-Robert brought it home-Paid &dollar;90-Wife and I went to Wm. Campbell's for cherries.

July 9- We all went to the Church Semi-Centennial-a grand affair. Mr. Green read the Church History. And a great feast members-faithful for 50 years.

July 13- Had a fine ride to the Church in the new buggy. Bell milking at sunrise.

The dog ran away and the boy's got another.

July 15- Casey came with her reaper-and got all the wheat cut.

July 17- Robert, August and I drew in all the wheat and bound some barley-Frank helped Casey. Paid August &dollar;7 for harvest work.

July 20- Cleaned and sold about 97 bushels wheat &dollar;9. Brother Robert came and we went to the Old Moon Farm and got 10 bushels of wheat.

July 24- Bought pants from Robert &dollar;2.50-hat &dollar;1. The poem I wrote about the Semi-Centennial was in the Commercial.

July 30- August cradled the oars south of the house. Wife, Mary, Elizabeth and I went to John Taylor's to tea and then to Prayer meeting.

August 5- Frank, Robert, Bell and I went on the Excursion to Detroit and Belle Isle Island and to Harsen's Island on the steamer Northwest-A pleasant trip-called on Frank, Mrs. Inglis.

August 20- Mary, Elizabeth and I went with the Excursion to Watkins Grove and saw his great farm.

August 22- Wife and I went to Augusta-found Mr. Campbell weak from overwork.

August 23- Frank and I went to Barns to see if Bemis could thrash for us. The 4 girls had their Portraits taken.

August 28- Elizabeth was offered and accepted a situation in the Union School.

August 30- No market for wool-Moved it to the woodshed.

September 2- Bell, Robert and I went to the Fisher funeral. Sick that night.

September 5- Jerome came with his steam thrasher and thrashed 196 bushels of Oats, 41 Bushels of Barley-155 Bushels Wheat-25 Bushels per acre-the best yield yet.

The engine did no run very well. Plenty of help and too much swearing and straw stack too flat. Paid &dollar;1.50 for coal and did not have enough.

September 7- Sacrament and only one added to the Church-

September 8- Bought 30 Bushels seed wheat from Mr. Leach for &dollar;30. Drilled about 1/2 of it in the South Field.

September 10- Went to the Cars (Depot) with Anna to see her leave for Elkhardt-Brother Robert and Francis came to see us-All went to Robert's for dinner-Grand a affair.

September 17- Frank and I sent to State Fair in Detroit-Saw Agnes, Francis and went over the water to Canada-Frank and I slept at Mother's and was kindly treated-Mother bright and happy at 82-No room for me in Detroit.

September 22- Frank working for Wm. Campbell-Robert digging potatoes and I picking them up. Borrowed &dollar;30 from brother Robert and paid A.J. Leach for seed wheat.

September 25- 3 tramps got their supper and slept in the barn.

Took 4 bushels wheat to the Mill and got 4 more barrels-Pomray helped husk and pick apples.

October 4- Took a barrel of apples to brother Robert-got a grist.

October 9- Husking corn-Wm. Campbell horse and buggy to take his family beyond Saline.

October 11- Bell and Eunice gathered nuts-heard of sad accident on the railroad near Jackson-15 killed.

October 14- Robert caught all the sheep and Frank marked those for sale-95 old ones-44 lambs-139 in all.

October 15- Frank, Robert and I went to the sale winding up the affairs of good old honest Mr. Voorhees-big crowd and big sale-bought a few things.

October 18- Frost-husked and went to town-small crop and small price for apples.

October 20- Went to hear about enlarging the Church. John Geddes, A. Campbell, Mr. Green did not pull together.

October 25- Husked and gathered russets and nearly all the apples. Took 2 barrels to Miss Patin-Paid Pomray &dollar;5 and Casey &dollar;2.75.

October 26- Mary, Elizabeth and I went to Church at night in the Moonlight and Saxtons great house was all right when we went down and nearly all burned down when we came back.

October 28- P. VanAtten digging for water east of the Barn and found water at 15 feet.

November 3- Snow and Winter here-Robert took Elizabeth to School-Put the sheep in the Orchard.

November 7- Robert and Mrs. L started for Augusta to tell the sad news of the old Aunt's death. (was she a Muir? or Anne Muir Campbell's Aunt?)

November 11- Frank and I went to Hewitt's and then to Goodspeeds and bought a Ram for &dollar;5.

November 17- Robert started with Elizabeth to the Union School.

John Miller took away the Ram.

November 18- Pomray and I drew in all the corn. Elizabeth's School dismissed-

November 25- Sold 21 old sheep to Mr. Freeman &dollar;27-helped drive then over the railroad. Wife and I went to old Mr. Howland's funeral.

November 26- Killed a sheep for Thanksgiving-

December 1st- Made a pen for the Calves-oiled the harness and the buggy-sold 3 sheep pelts to G. Gager &dollar;2.50.

December 22- Frank & Jerome killed two swine-4 of us went to a big surprise party for Uncle Wm., brother Robert-Wm. C. got a present in gold.

December 25- Christmas-we all received nice presents-a Christmas box from Sister Agnes-the 4 girls and 2 boys received valuable tkens, kindness of brother Robert-I always think of Father on Christmas-1868-Eleven years since he last spoke to me for the last time.

December 29- Went to town got a barrel of Salt-good sleighing the fast driving-also 60 1bs rock salt-packed pork in the afternoon.

December 31- Last of 1879-Another year with all its joys and sorrows gone.

View a photo of the The Lambie family in our Gleanings image gallery.