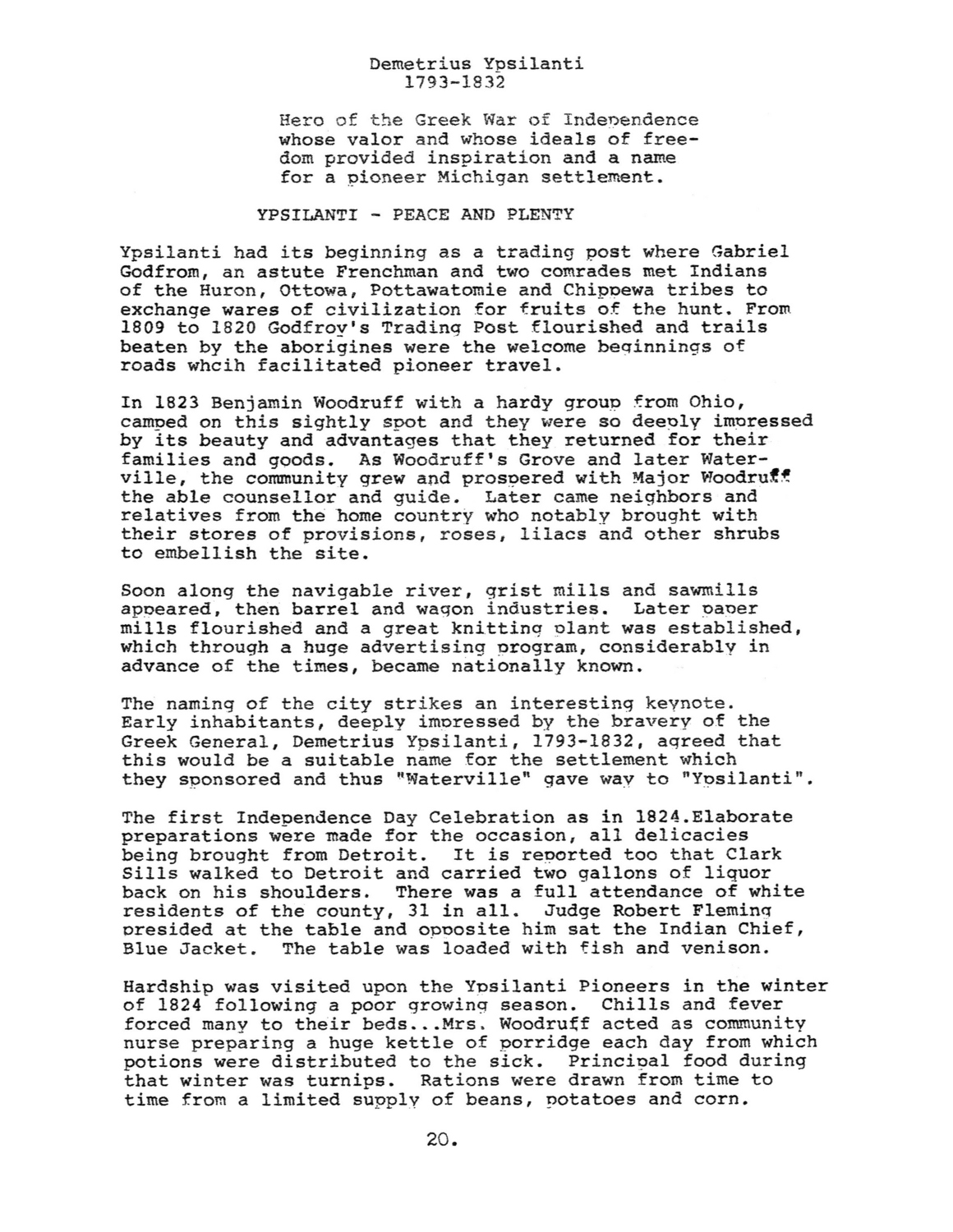 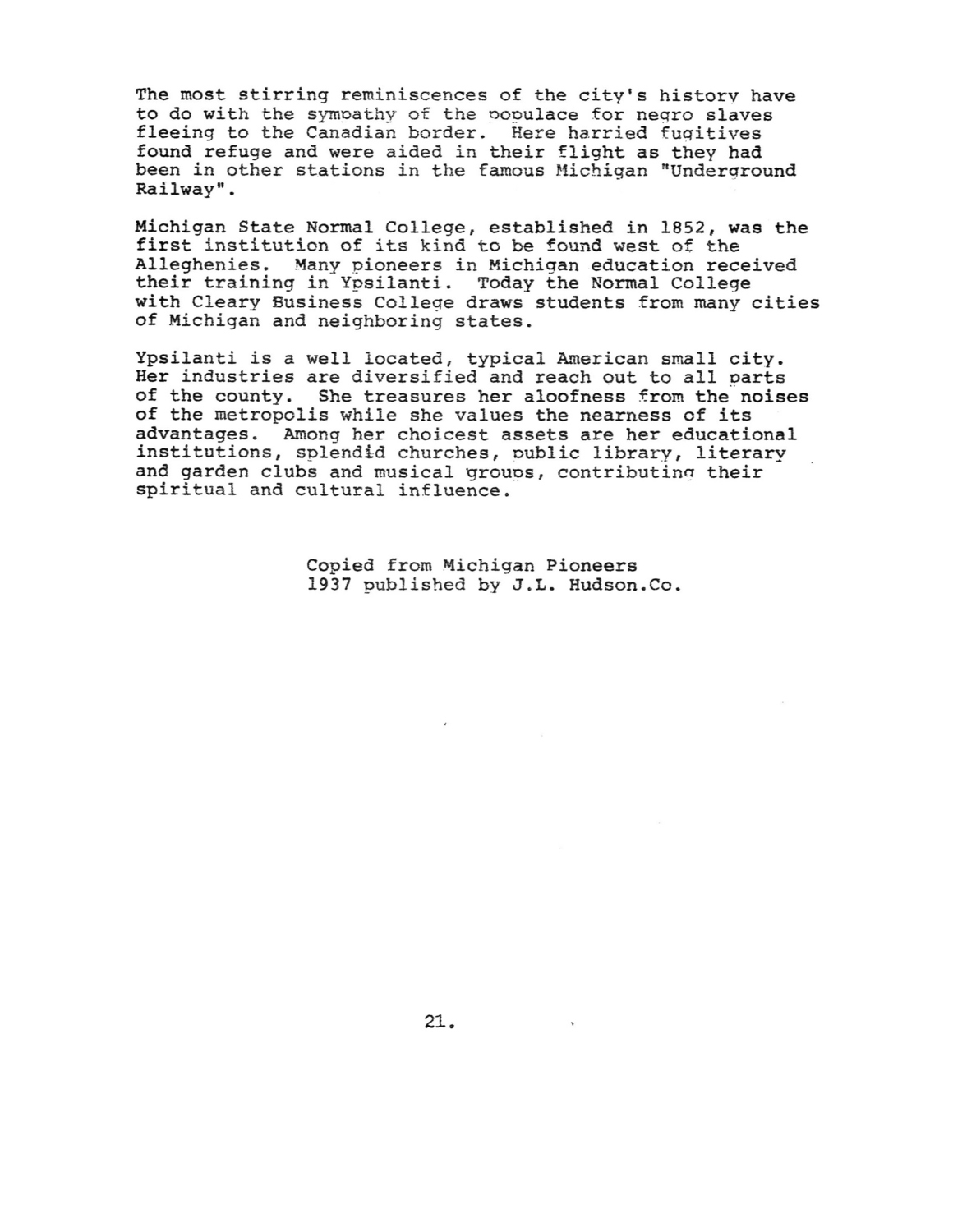 Hero of the Greek War of Independence whose valor and whose ideals of freedom provided inspiration and a name for a pioneer Michigan settlement.

Ypsilanti had its beginning as a trading post where Gabriel Godfrom, an astute Frenchman and two comrades met Indians of the Huron, Ottawa, Pottawatomie and Chippewa tribes to exchange wares of civilization for fruits of the hunt. From 1809 to 1820 Godfroy's Trading Post flourished and trails beaten by the aborigines were the welcome beginnings of roads whcih facilitated pioneer travel.

In 1823 Benjamin Woodruff with a hardy group from Ohio, camped on this sightly spot and they were so deeply impressed by its beauty and advantages that they returned for their families and goods. As Woodruff's Grove and later Waterville, the community grew and prospered with Major Woodruff the able counselor and guide. Later came neighbors and relatives from the home country who notably brought with their stores of provisions, roses, lilacs and other shrubs to embellish the site.

Soon along the navigable river, grist mills and sawmills appeared, then barrel and wagon industries. Later paper mills flourished and a great knitting plant was established, which through a huge advertising program, considerably in advance of the times, became nationally known.

The naming of the city strikes an interesting keynote. Early inhabitants, deeply impressed by the bravery of the Greek General, Demetrius Ypsilanti, 1793–1832, agreed that this would be a suitable name for the settlement which they sponsored and thus “Waterville” gave way to “Ypsilanti”.

The first Independence Day Celebration as in 1824. Elaborate preparations were made for the occasion, all delicacies being brought from Detroit. It is reported too that Clark Sills walked to Detroit and carried two gallons of liquor back on his shoulders. There was a full attendance of white residents of the county, 31 in all. Judge Robert Fleming presided at the table and opposite him sat the Indian Chief, Blue Jacket. The table was loaded with fish and venison.

Hardship was visited upon he Ypsilanti Pioneers in the winter of 1824 following a poor growing season. Chills and fever forced many to their beds… Mrs. Woodruff acted as community nurse preparing a huge kettle of porridge each day from which potions were distributed to the sick. Principal food during that winter was turnips. Rations were drawn from time to time from a limited supply of beans, potatoes and corn.

The most stirring reminiscences of the city's history have to do with the sympathy of the populace for negro slaves fleeing to the Canadian border. Here harried fugitives found refuge and were aided in their flight as they had been in other stations in the famous Michigan “Underground railway”.

Michigan State Normal College, established in 1852, was the first institution of its kind to be found west of the Alleghenies. Many pioneers in Michigan education received their training in Ypsilanti. Today the Normal College with Cleary Business College draws students from many cities of Michigan and neighboring states.

Ypsilanti is a well located, typical American small city. Her industries are diversified and reach out to all parts of the county. She treasures her aloofness from the noises of the metropolis while she values the nearness of its advantages. Among her choicest assets are her educational institutions, splendid churches, public library, literary and garden clubs and musical groups, contributing their spiritual and cultural influence.