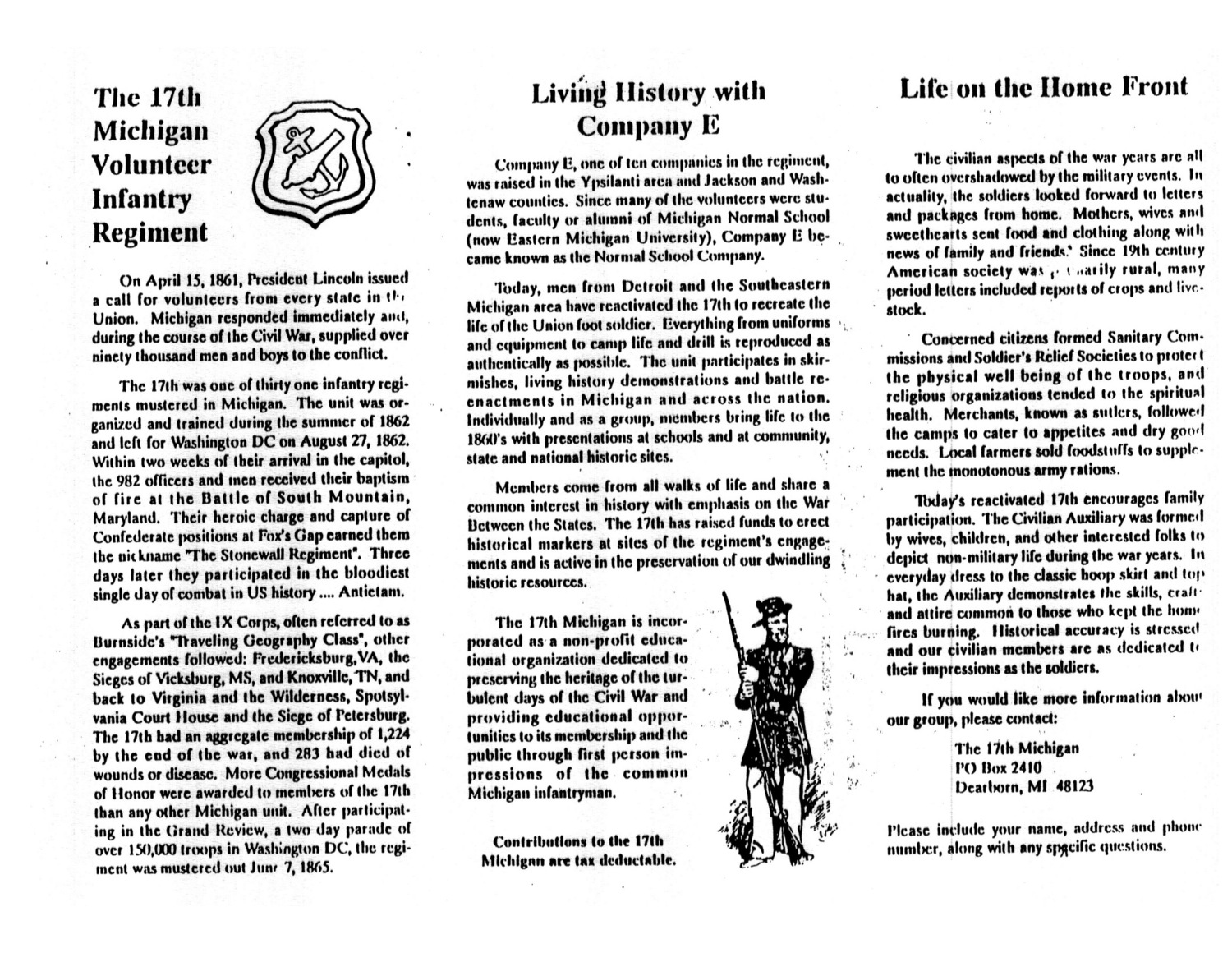 On April 15, 1861, President Lincoln issued a call for volunteers from every state in the Union. Michigan responded immediately and, during the course of the Civil War, supplied over ninety thousand men and boys to the conflict.

The 17th was one of thirty one infantry regiments mustered in Michigan. The unit was organized and trained during the summer of 1862 and left for Washington DC on August 27, 1862. Within two weeks of their arrival in the capitol, the 982 officers and men received their baptism of fire at the Battle of South Mountain, Maryland. Their heroic charge and capture of Confederate positions at Fox's Gap earned them the nickname “The Stonewall Regiment”. Three days later they participated in the bloodiest single day of combat in US history...Antietem.

As part of the IX Corps, often referred to as Burnside's “Thaveling Geography Class”, other engagements followed: Fredericksburg, VA, the Sieges of Vicksburg, MS, and Knoxville, TN, and back to Virginia and the Wilderness, Spotsylvania Court House and the Siege of Petersburg. The 17th had an aggregate membership of 1,224 by the end of the war, and 283 had died of wounds or disease. More Congressional Medals of Honor were awarded to members of the 17th than any other Michigan unit. After participating in the Grand Review, a two day parade of over 150,000 troops in Washington DC, the regiment was mustered out June 7, 1865.

Company E, one of ten companies in the regiment, was raised in the Ypsilanti area and Jackson and Washtenaw counties. Since many of the volunteers were students, faculty or alumni of Michigan Normal School (now Eastern Michigan University), Company E became known as the Normal School Company.

Today, men from Detroit and the Southeastern Michigan area have reactivated the 17th to recreate the life of the Union foot soldier. Everything from uniforms and equipment to camp life and drill is reproduced as authentically as possible. The unit participates in skirmishes, living history demonstrations and battle reenactments in Michigan and across the nation. Individually and as a group, members bring life to the 1860's with presentations at schools and at community, state and national historic sites.

Members come from all walks of life and share a common interest in history with emphasis on the War Between the States. The 17th has raised funds to erect historical markers at sites of the regiment's engagements and is active in the preservation of our dwindling historic resources.

The 17th Michigan is incorporated as a non-profit educational organization dedicated to preserving the heritage of the turbulent days of the Civil War and providing educational opportunities to its membership and the public through first person impressions of the common Michigan infantryman.

Contributions to the 17th Michigan are tax deductable.

Life on the Home Front

The civilian aspects of the war years are all to often overshadowed by the military events. In actuality, the soldiers looked forward to letters and packages from home. Mothers, wives and sweethearts sent food and clothing along with news of family and friends. Since 19th century American society was arily rural, many period letters included reports of crops and livestock.

Concerned citizens formed Sanitary Commissions and Soldier's Relief Societies to prote the physical well being of the troops, and religious organizations tended to the spiritual health. Merchants, known as sutlers, followed the camps to cater to appetites and dry good needs. Local farmers sold foodstuffs to supplement the monotonous army rations.

Today's reactivated 17th encourages family participation. The Civilian Auxiliary was formed by wives, children, and other interested folks to depict non-military life during the war years. In everyday dress to the classic hoop skirt and top hat, the Auxiliary demonstrates the skills, craft and attire common to those who kept the home fires burning. Historical accuracy is stressed and our civilian members are as dedicated to their impressions as the soldiers.

Please include your name, address and phone number, along with any specific questions.