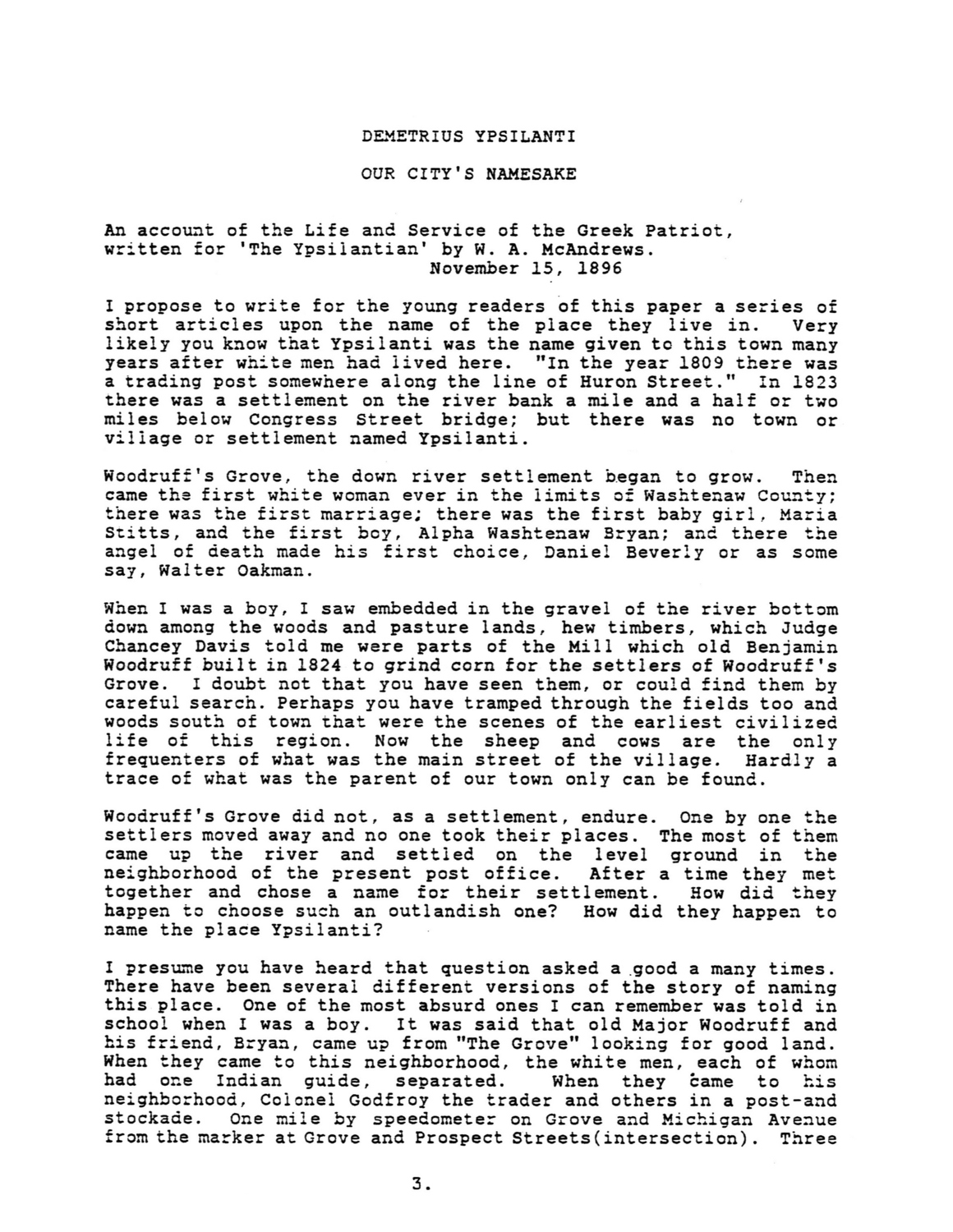 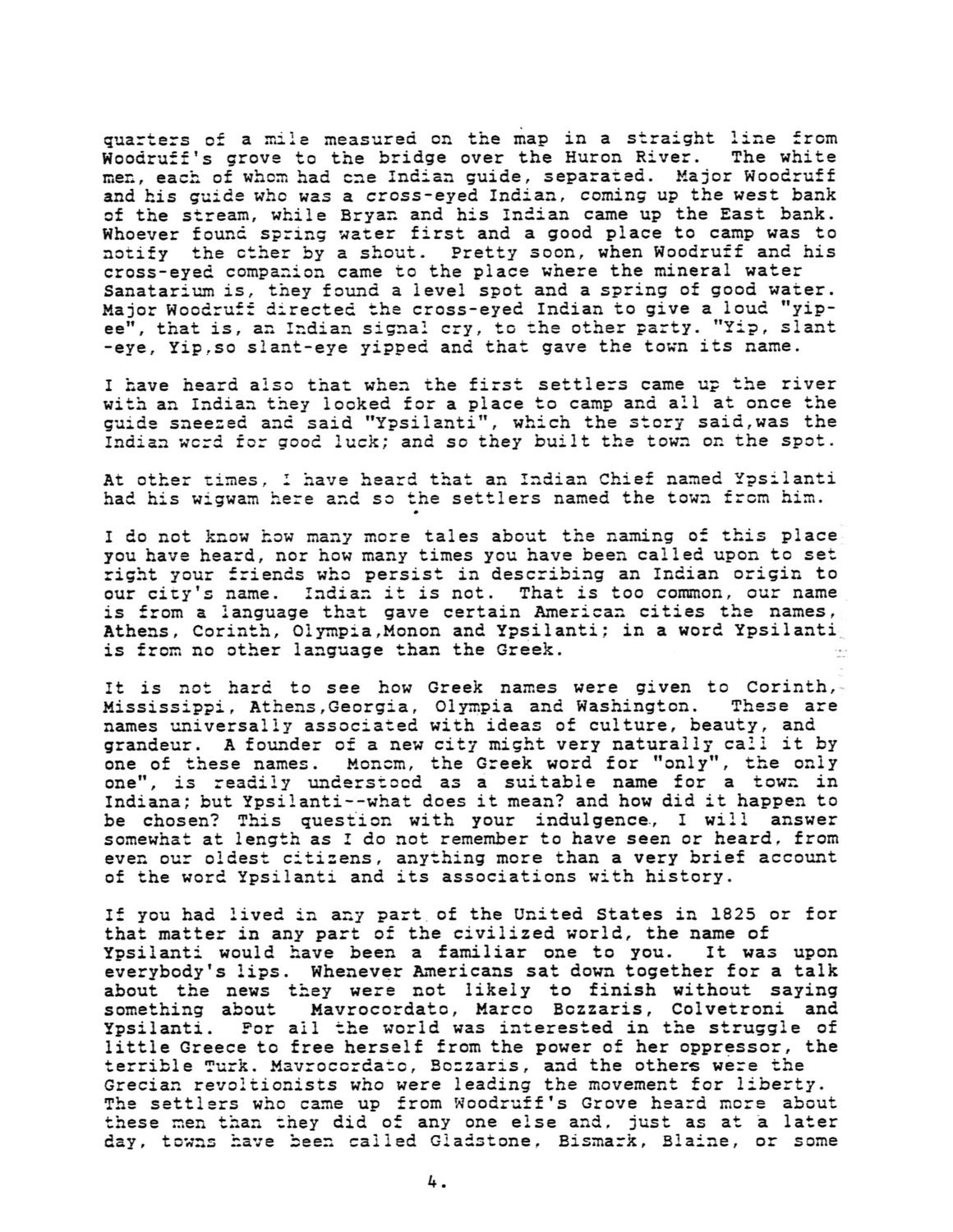 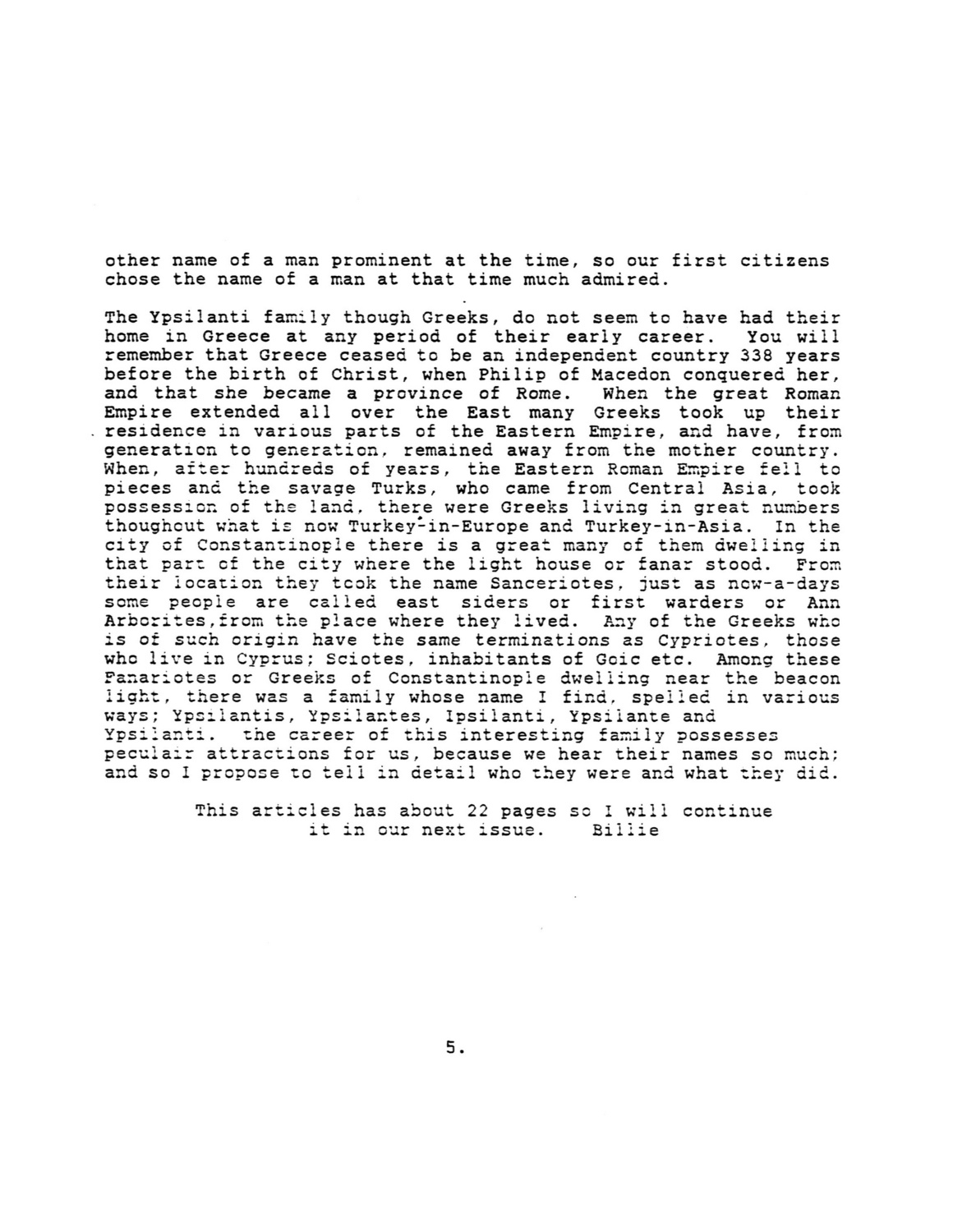 An account of the Life and Service of the Greek Patriot, written for ‘The Ypsilantian’ by W. A. McAndrews.

I propose to write for the young readers of this paper a series of short articles upon the name of the place they live in. Very likely you know that Ypsilanti was the name given to this town many years after white men had lived here. “In the year 1809 there was a trading post somewhere along the line of Huron Street.” In 1823 there was a settlement on the river bank a mile and a half or two miles below Congress Street bridge; but there was no town or village or settlement named Ypsilanti.

When I was a boy, I saw embedded in the gravel of the river bottom down among the woods and pasture lands, hew timbers, which Judge Chancey Davis told me were parts of the Mill which old Benjamin Woodruff built in 1824 to grind corn for the settlers of Woodruff's Grove. I doubt not that you have seen them, or could find them by careful search. Perhaps you have tramped through the fields too and woods south of town that were the scenes of the earliest civilized life of this region. Now the sheep and cows are the only frequenters of what was the main street of the village. Hardly a trace of what was the parent of our town only can be found.

Woodruff's Grove did not, as a settlement, endure. One by one the settlers moved away and no one took their places. The most of them came up the river and settled on the level ground in the neighborhood of the present post office. After a time they met together and chose a name for their settlement. How did they happen to choose such an outlandish one? How did they happen to name the place Ypsilanti?

I presume you have heard that question asked a good a many times. There have been several different versions of the story of naming this place. One of the most absurd ones I can remember was told in school when I was a boy. It was said that old Major Woodruff and his friend, Bryan, came up from “The Grove” looking for good land. When they came to this neighborhood, the white men, each of whom had one Indian guide, separated. When they came to his neighborhood, Colonel Godfrey the trader and others in a post-and stockade. One mile by speedometer on Grove and Michigan Avenue from the marker at Grove and Prospect Streets(intersection). Three quarters of a mile measured on the map in a straight line from Woodruff's grove to the bridge over the Huron River. The white men, each of whom had one Indian guide, separated. Major Woodruff and his guide who was a cross-eyed Indian, coming up the west bank of the stream, while Bryan and his Indian came up the East bank. Whoever found spring water first and a good place to camp was to notify the other by a shout. Pretty soon, when Woodruff and his cross-eyed companion came to the place where the mineral water Sanatarium is, they found a level spot and a spring of good water. Major Woodruff directed the cross-eyed Indian to give a loud “yipee”, that is, an Indian signal cry, to the other party. “Yip, slant-eye, Yip, so slant-eye yipped and that gave the town its name.

I have heard also that when the first settlers came up the river with an Indian they looked for a place to camp and all at once the guide sneezed and said “Ypsilanti”, which the story said, was the Indian word for good luck; and so they built the town on the spot.

At other times, I have heard that an Indian Chief named Ypsilanti had his wigwam here and so the settlers named the town from him.

I do not know how many more tales about the naming of this place you have heard, nor how many times you have been called upon to set right your friends who persist in describing an Indian origin to our city's name. Indian it is not. That is too common, our name is from a language that gave certain American cities the names, Athens, Corinth, Olympia, Monon and Ypsilanti; in a word Ypsilanti is from no other language than the Greek.

It is not hard to see how Greek names were given to Corinth, Mississippi, Athens, Georgia, Olympia and Washington. These are names universally associated with ideas of culture, beauty, and grandeur. A founder of a new city might very naturally call it by one of these names. Monom, the Greek word for “only”, the only one”, is readily understood as a suitable name for a town in Indiana; but Ypsilanti–what does it mean? and how did it happen to be chosen? This question with your indulgence, I will answer somewhat at length as I do not remember to have seen or heard, from even our oldest citizens, anything more than a very brief account of the word Ypsilanti and its associations with history.

If you had lived in any part of the United States in 1825 or for that matter in any part of the civilized world, the name of Ypsilanti would have been a familiar one to you. It was upon everybody's lips. Whenever Americans sat down together for a talk about the news they were not likely to finish without saying something about Mavrocordato, Marco Bozzaris, Colvetroni and Ypsilanti. For all the world was interested in the struggle of little Greece to free herself from the power of her oppressor, the terrible Turk. Mavrocordato, Bozzaris, and the others were the Grecian revoltionists who were leading the movement for liberty. The settlers who came up from Woodruff's Grove heard more about these men than they did of any one else and. just as at a later day, towns have been called Gladstone, Bismark, Blaine, or some other name of a man prominent at the time, so our first citizens chose the name of a man at that time much admired.

The Ypsilanti family though Greeks, do not seem to have had their home in Greece at any period of their early career. You will remember that Greece ceased to be an independent country 338 years before the birth of Christ, when Philip of Macedon conquered her, and that she became a province of Rome. When the great Roman Empire extended all over the East many Greeks took up their residence in various parts of the Eastern Empire, and have, from generation to generation, remained away from the mother country. When, after hundreds of years, the Eastern Roman Empire fell to pieces and the savage Turks, who came from Central Asia, took possession of the land, there were Greeks living in great numbers thoughout what is now Turkey-in-Europe and Turkey-in-Asia. In the city of Constantinople there is a great many of them dwelling in that part of the city where the light house or fanar stood. From their location they took the name Sanceriotes, just as now-a-days some people are called east siders or first warders or Ann Arborites, from the place where they lived. Any of the Greeks who is of such origin have the same terminations as Cypriotes, those who live in Cyprus; Sciotes, inhabitants of Goic etc. Among these Fanariotes or Greeks of Constantinople dwelling near the beacon light, there was a family whose name I find, spelled in various ways; Ypsilantis, Ypsilantes, Ipsilanti, Ypsilante and Ypsilanti. the career of this interesting family possesses peculair attractions for us, because we hear their names so much; and so I propose to tell in detail who they were and what they did.

This articles has about 22 pages so I will continue it in our next issue.