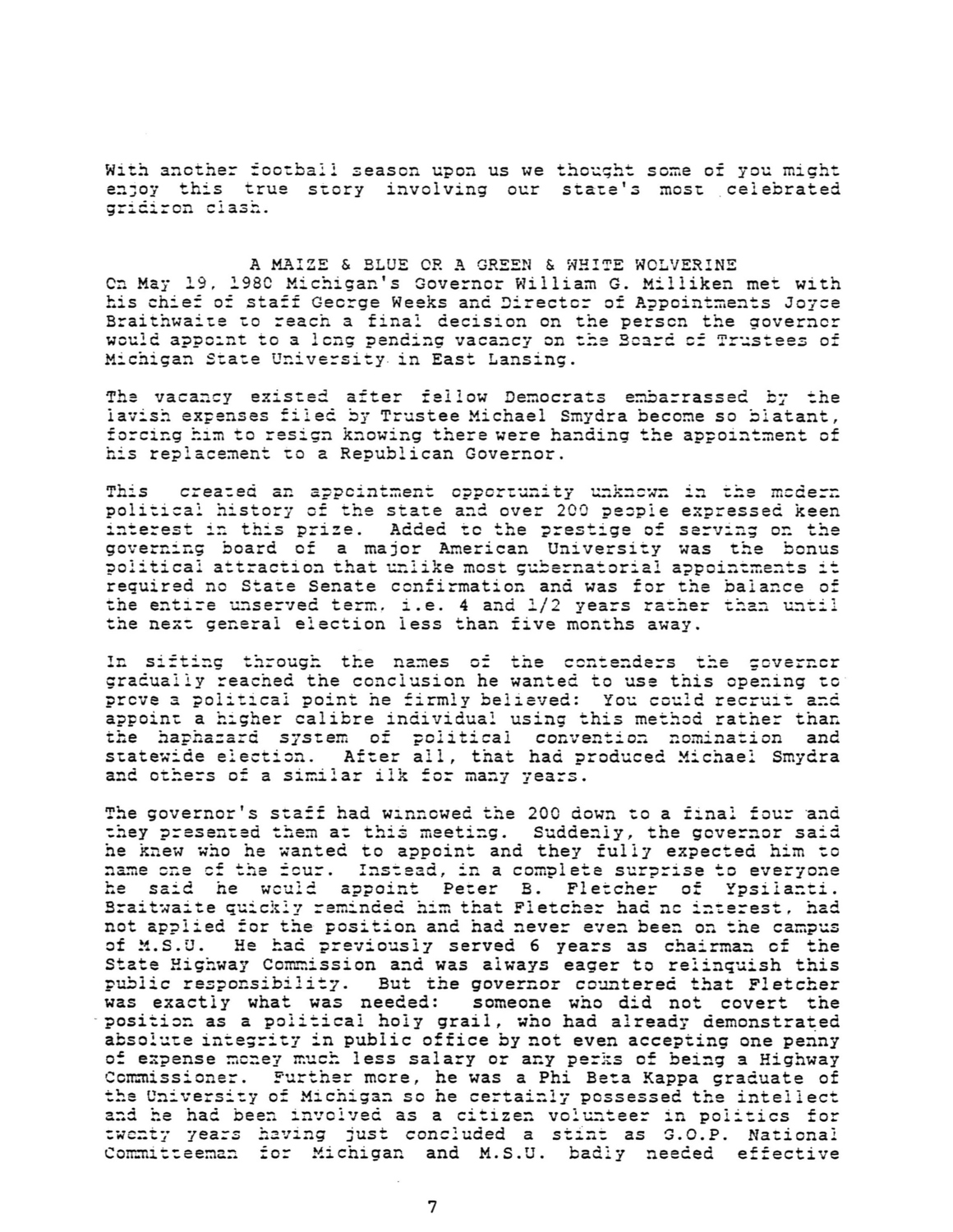 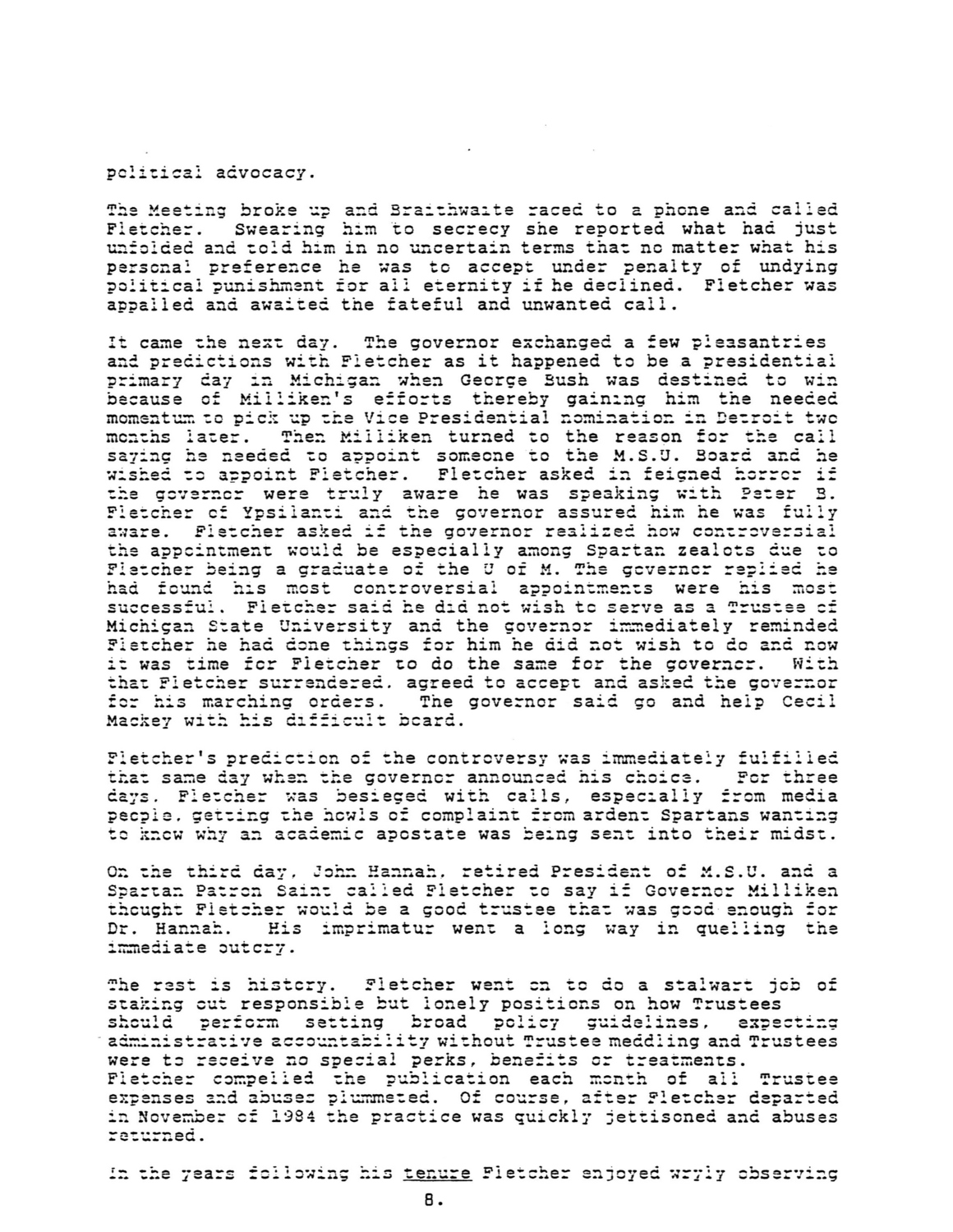 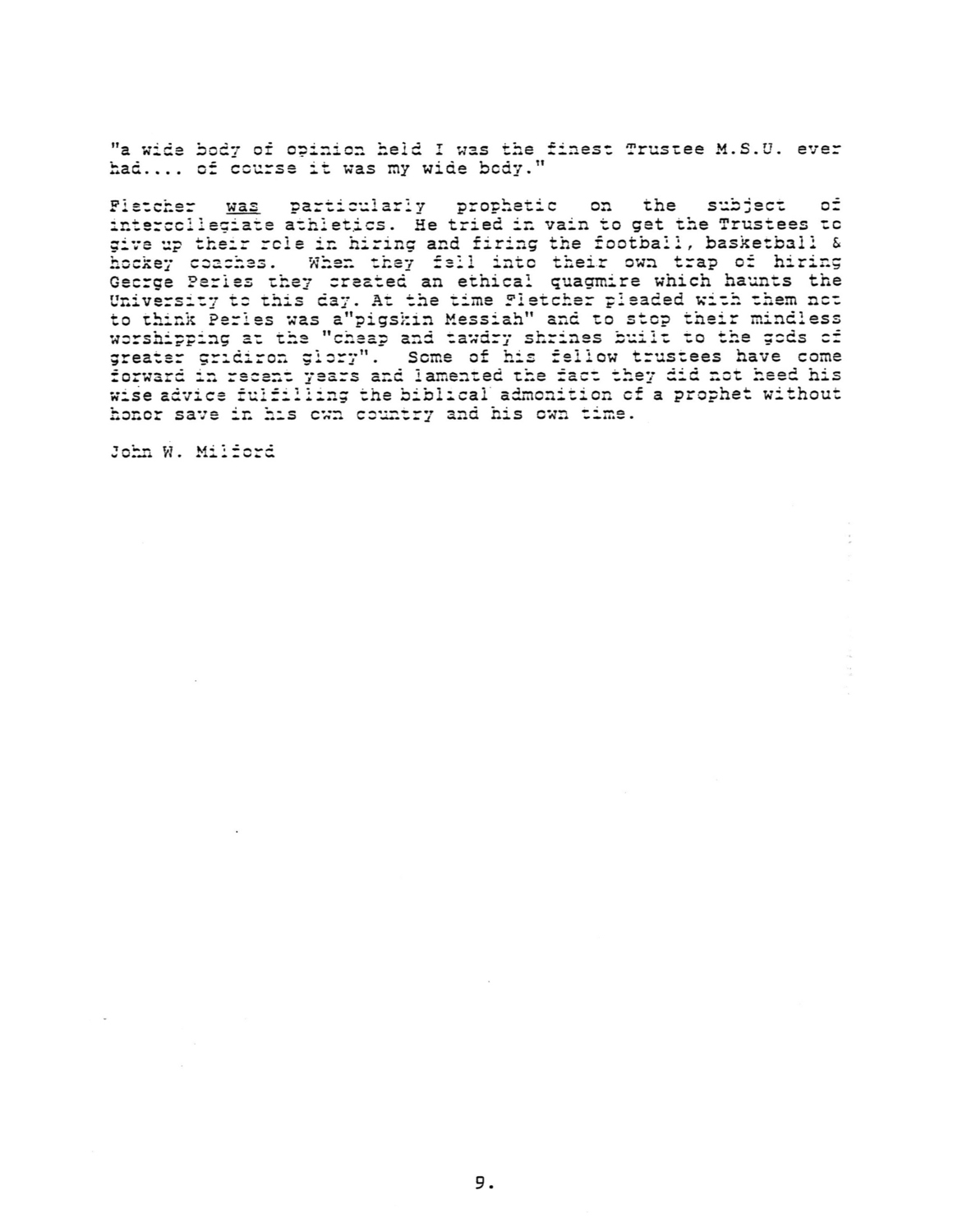 With another football season upon us we thought some of you might enjoy this true story involving our state's most celebrated gridiron clash.

A MAIZE & BLUE OR A GREEN & WHITE WOLVERINE

On May 19, 1980 Michigan's Governor William G. Milliken met with his chief of staff George Weeks and Director of Appointments Joyce Braithwaite to reach a final decision on the person the governor would appoint to a long pending vacancy on the Board of Trustees of Michigan State University in East Lansing.

The vacancy existed after fellow Democrats embarrassed by the lavish expenses filed by Trustee Michael Smydra become so blatant, forcing him to resign knowing there were handing the appointment of his replacement to a Republican Governor.

This created an appointment opportunity unknown in the modern political history of the state and over 200 people expressed keen interest in this prize. Added to the prestige of serving on the governing board of a major American University was the bonus political attraction that unlike most gubernatorial appointments it required no State Senate confirmation and was for the balance of the entire unserved term. i.e. 4 and 1/2 years rather than until the next general election less than five months away.

In sifting through the names of the contenders the governor gradually reached the conclusion he wanted to use this opening to prove a political point he firmly believed: You could recruit and appoint a higher calibre individual using this method rather than the haphazard system of political convention nomination and statewide election. After all, that had produced Michael Smydra and others of a similar ilk for many years.

The governor's staff had winnowed the 200 down to a final four and they presented them at this meeting. Suddenly, the governor said he knew who he wanted to appoint and they fully expected him to name one of the four. Instead, in a complete surprise to everyone he said he would appoint Peter B. Fletcher of Ypsilanti. Braitwaite quickly reminded him that Fletcher had no interest, had not applied for the position and had never even been on the campus of M.S.U. He had previously served 6 years as chairman of the State Highway Commission and was always eager to relinquish this public responsibility. But the governor countered that Fletcher was exactly what was needed: someone who did not covert the position as a political holy grail, who had already demonstrated absolute integrity in public office by not even accepting one penny of expense money much less salary or any perks of being a Highway Commissioner. Further more, he was a Phi Beta Kappa graduate of the University of Michigan so he certainly possessed the intellect and he had been involved as a citizen volunteer in politics for twenty years having just concluded a stint as G.O.P. National Committeeman for Michigan and M.S.U. badly needed effective political advocacy.

The Meeting broke up and Braithwaite raced to a phone and called Fletcher. Swearing him to secrecy she reported what had just unfolded and cold him in no uncertain terms that no matter what his personal preference he was to accept under penalty of undying political punishment for all eternity if he declined. Fletcher was appalled and awaited the fateful and unwanted call.

It came the next day. The governor exchanged a few pleasantries and predictions with Fletcher as it happened to be a presidential primary day in Michigan when George Bush was destined to win because of Milliken's efforts thereby gaining him the needed momentum to pick up the Vice Presidential nomination in Detroit two months later. Then Milliken turned to the reason for the call saying he needed to appoint someone to the M.S.U. Board and he wished to appoint Fletcher. Fletcher asked in feigned horror if the governor were truly aware he was speaking with Peter B. Fletcher of Ypsilanti and the governor assured him he was fully aware. Fletcher asked if the governor realized how controversial the appointment would be especially among Spartan zealots due to Fletcher being a graduate of the U of M. The governor replied he had found his most controversial appointments were his most successful. Fletcher said he did not wish to serve as a Trustee of Michigan State University and the governor immediately reminded Fletcher he had done things for him he did not wish to do and now it was time for Fletcher to do the same for the governor. With that Fletcher surrendered, agreed to accept and asked the governor for his marching orders. The governor said go and help Cecil Mackey with his difficult board.

Fletcher's prediction of the controversy was immediately fulfilled that same day when the governor announced his choice. For three days. Fletcher was besieged with calls, especially from media people, getting the howls of complaint from ardent Spartans wanting to know why an academic apostate was being sent into their midst.

On the third day, John Hannah, retired President of M.S.U. and a Spartan Patron Saint called Fletcher to say if Governor Milliken thought Fletcher would be a good trustee that was good enough for Dr. Hannah. His imprimatur went a long way in quelling the immediate outcry.

The rest is history. Fletcher went on to do a stalwart job of staking out responsible but lonely positions on how Trustees should perform setting broad policy guidelines, expecting administrative accountability without Trustee meddling and Trustees were to receive no special perks, benefits or treatments.

Fletcher compelled the publication each month of all Trustee expenses and abuses plummeted. Of course, after Fletcher departed in November of 1984 the practice was quickly jettisoned and abuses returned.

In the years following his tenure Fletcher enjoyed wryly observing “a wide body of opinion held I was the finest Trustee M.S.U. ever had…. of course it was my wide body.”

Fletcher was particularly prophetic on the subject of intercollegiate athletics. He tried in vain to get the Trustees to give up their role in hiring and firing the football, basketball & hockey coaches. When they fell into their own trap of hiring George Perles they created an ethical quagmire which haunts the University to this day. At the time Fletcher pleaded with them not to think Perles was a “Pigskin Messiah” and to stop their mindless worshipping at the “cheap and tawdry shrines built to the gods of greater gridiron glory”. Some of his fellow trustees have come forward in recent years and lamented the fact they did not heed his wise advice fulfilling the biblical admonition of a prophet without honor save in his own country and his own time.