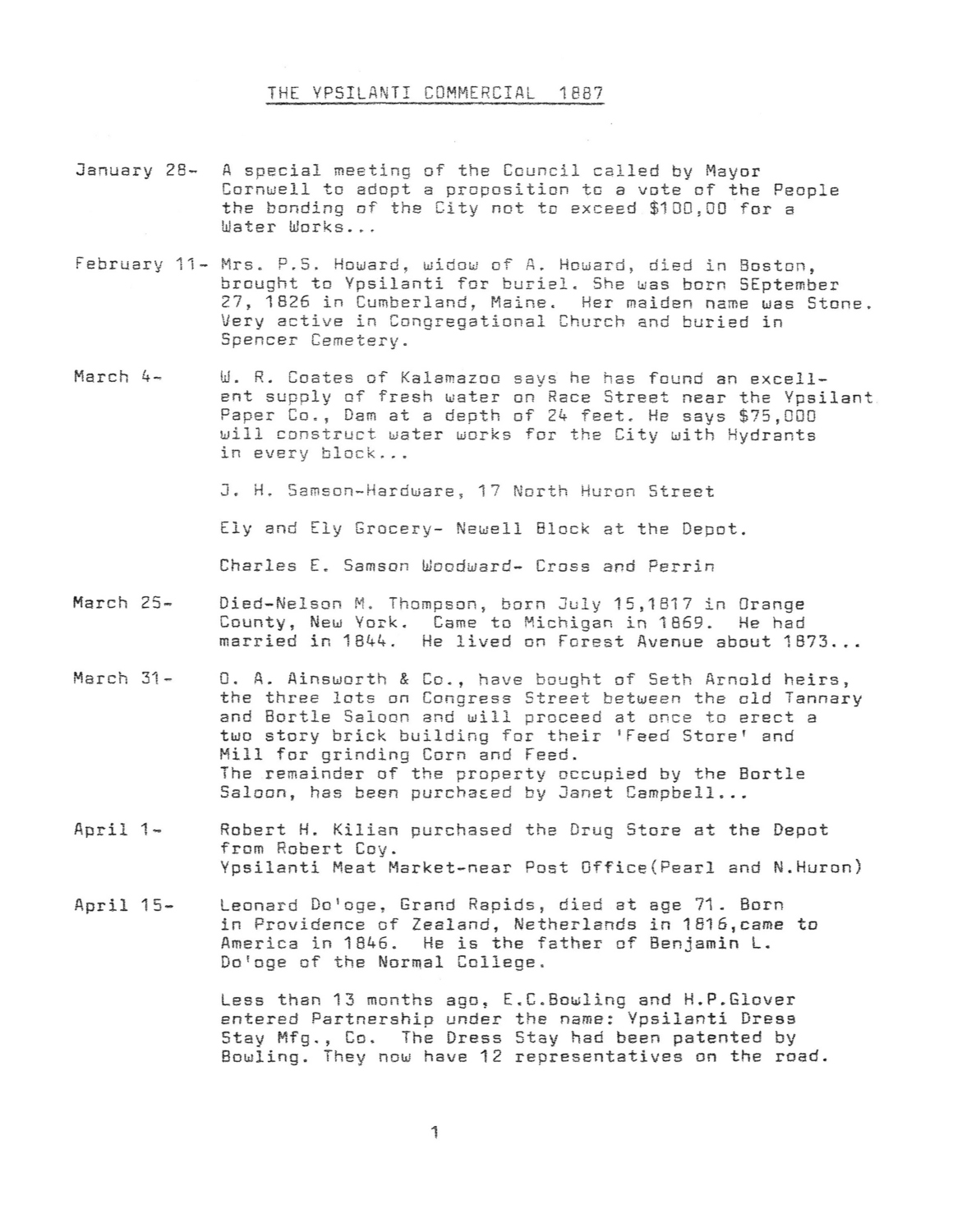 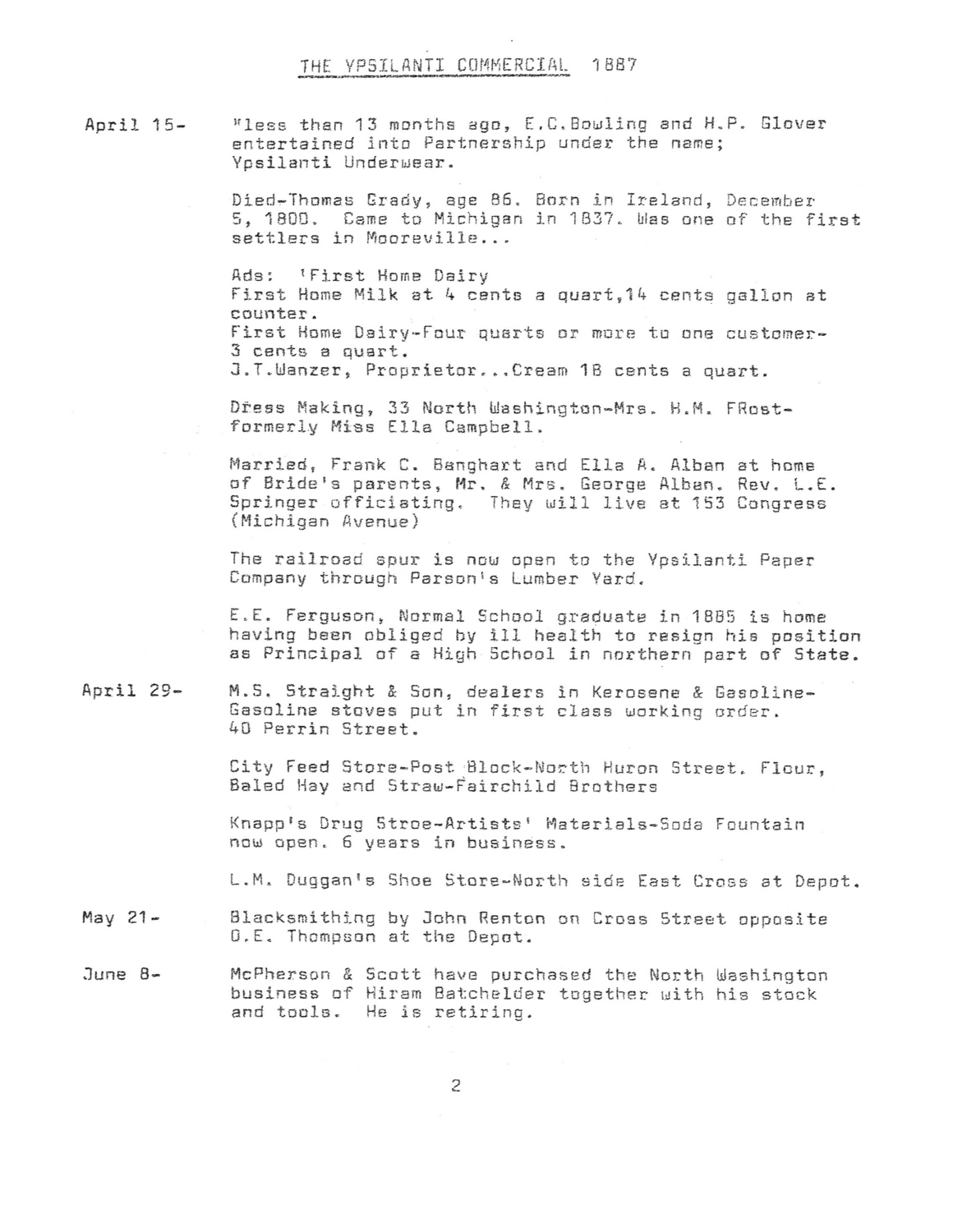 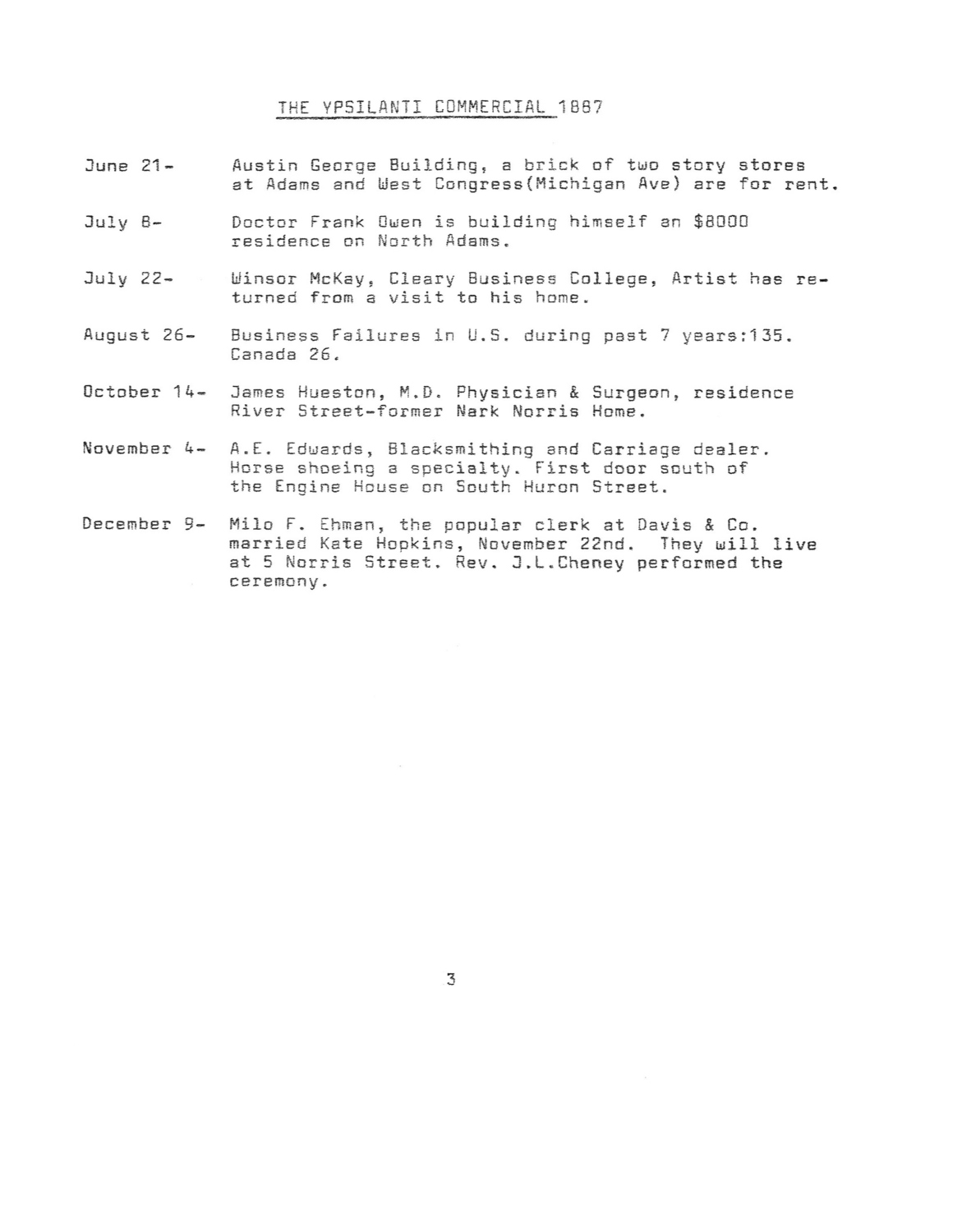 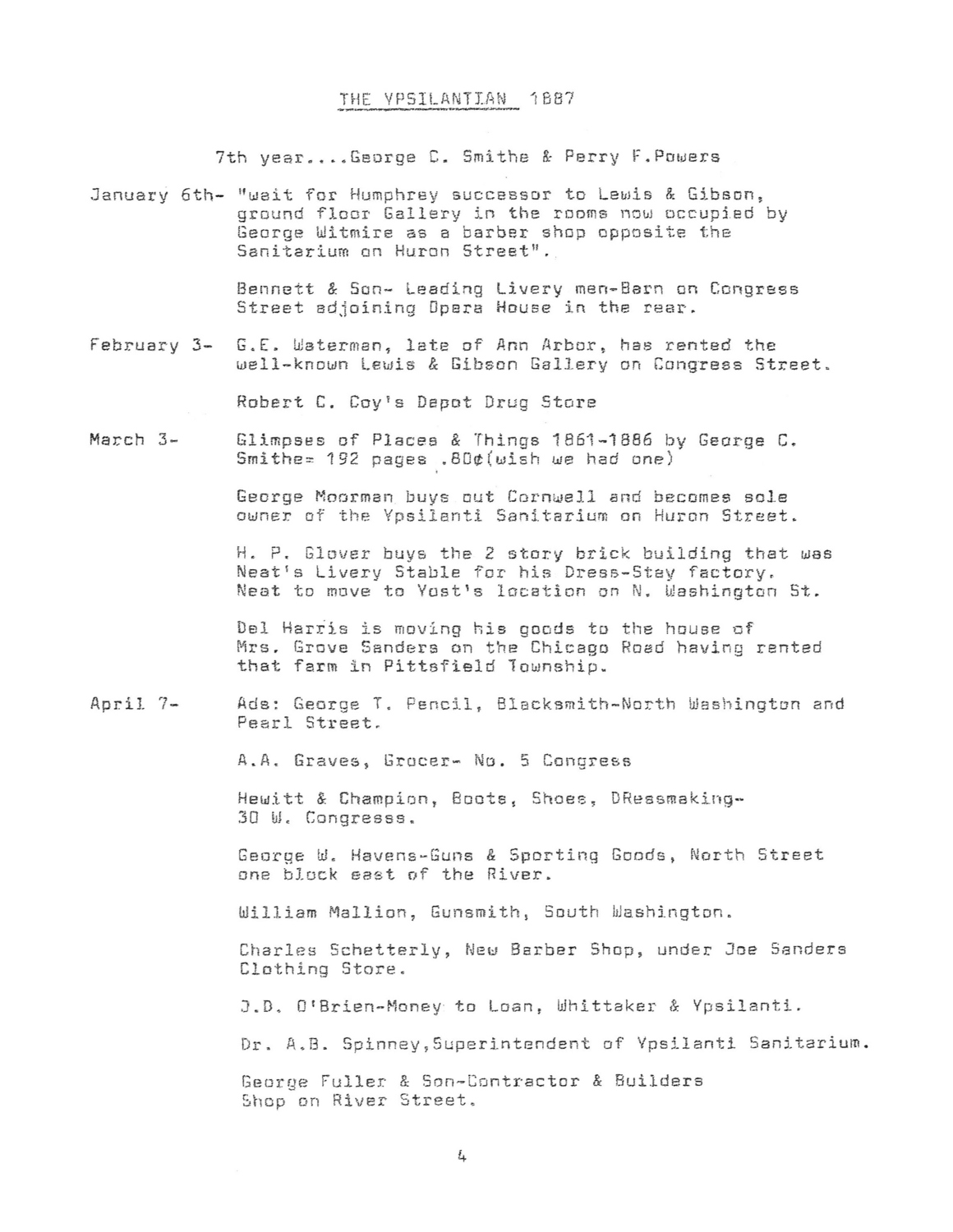 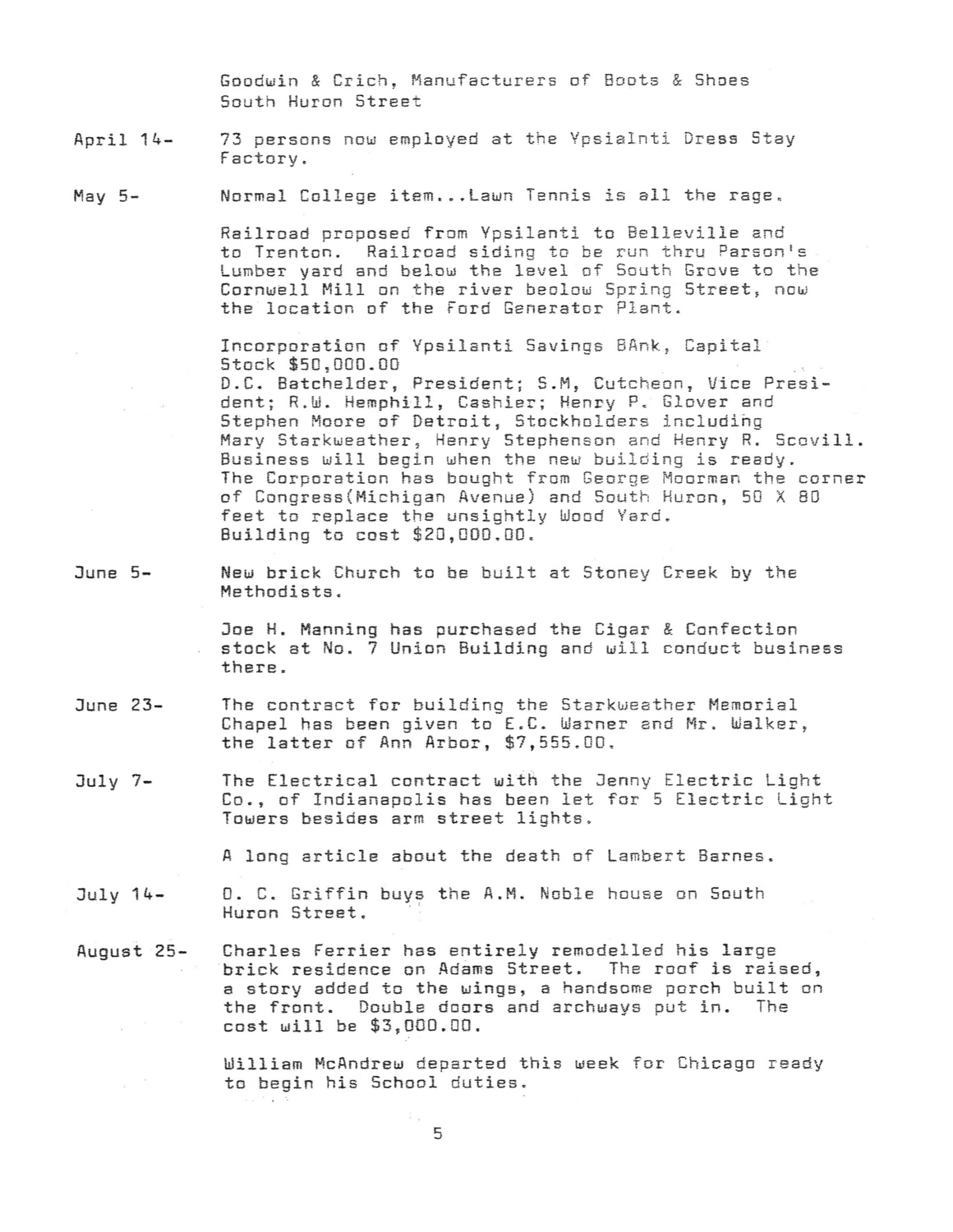 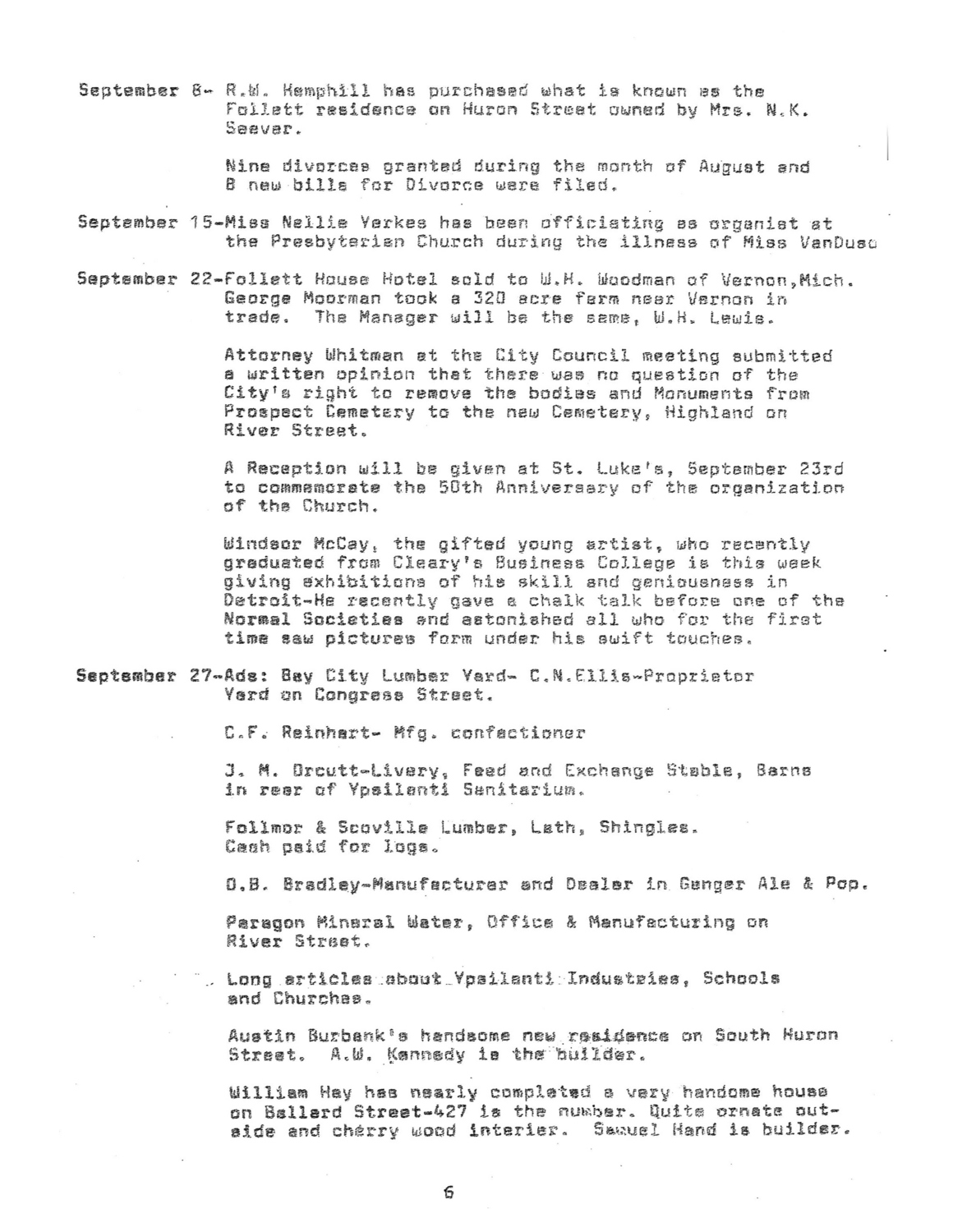 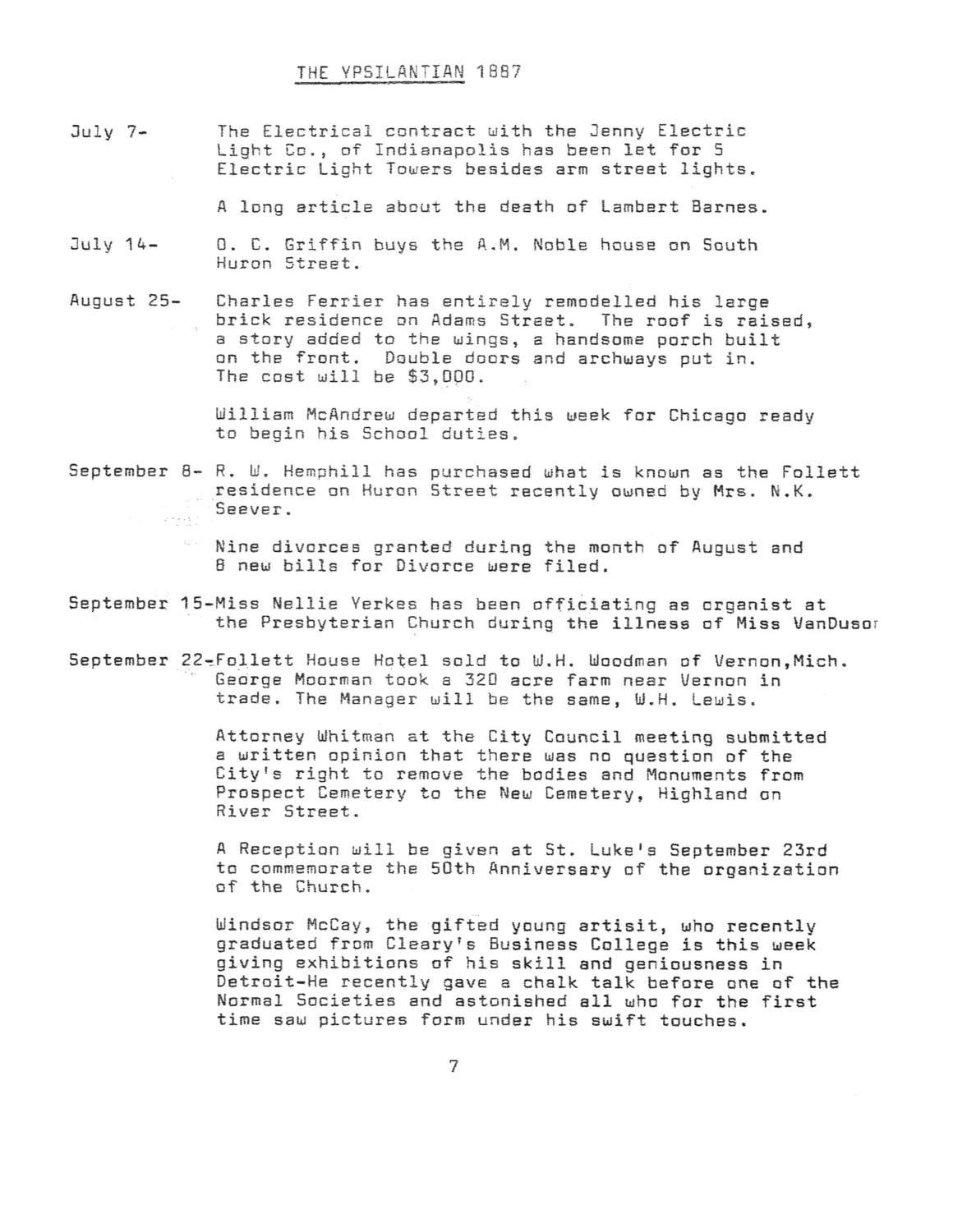 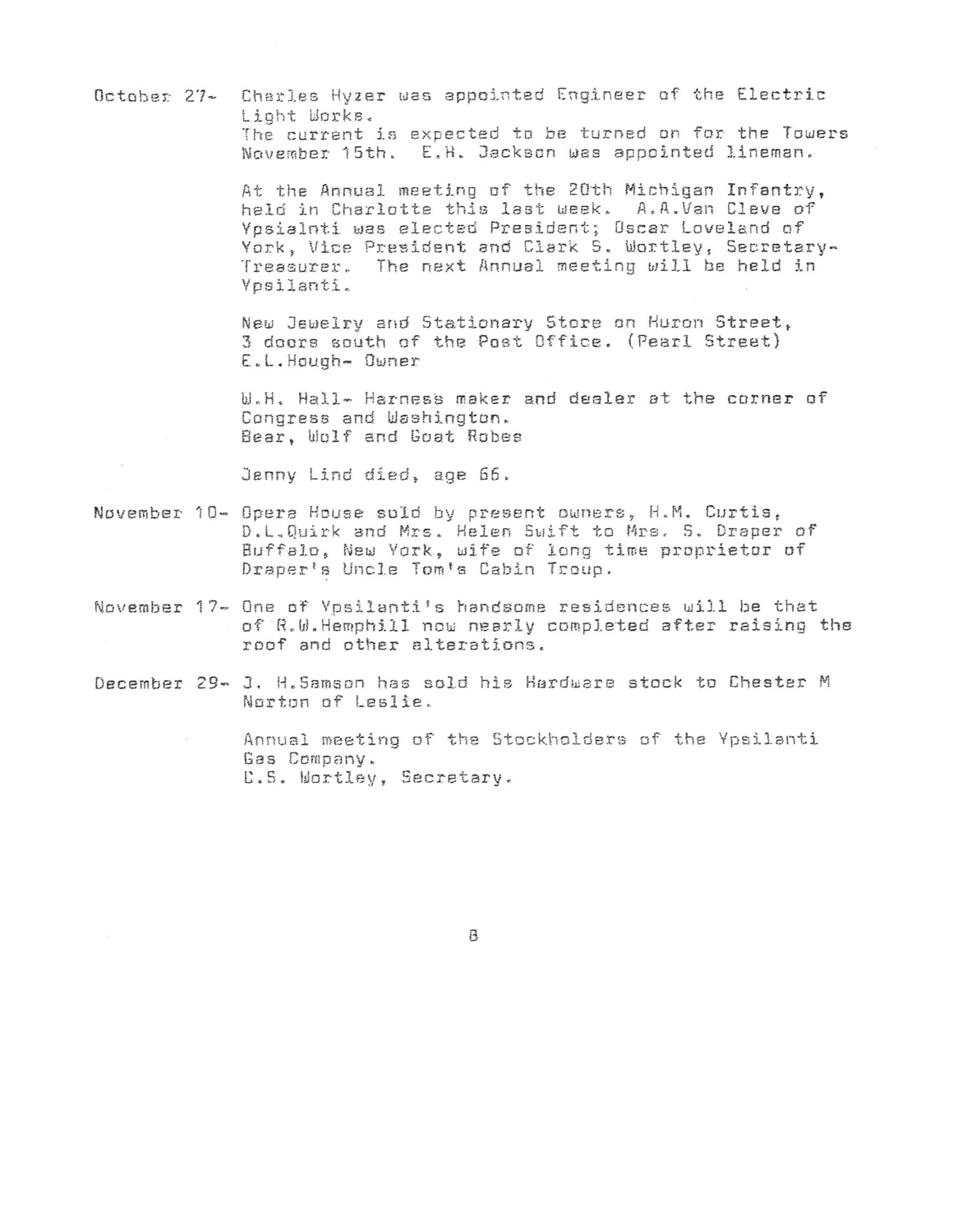 January 28-
A special meeting of the Council called by Mayor Cornwell to adopt a proposition to a vote of the People the bonding of the City not to exceed &dollar;100,00 for a Water Works…

February 11-
Mrs. P.S. Howard, widow of A. Howard, died in Boston, brought to Ypsilanti for buriel. She was born September 27, 1826 in Cumberland, Maine. Her maiden name was Stone. Very active in Congregational Church and buried in Spencer Cemetery.

March 4-
W. R. Coates of Kalamazoo says he has found an excellent supply of fresh water on Race Street near the Ypsilanti Paper Co., Dam at a depth of 24 feet. He says &dollar;75,000 will construct water works for the City with Hydrants in every block…

Ely and Ely Grocery-Newell Block at the Depot.

March 31-
O. A. Ainsworth & Co., have bought of Seth Arnold heirs, the three lots on Congress Street between the old Tannary and Bortle Saloon and will proceed at once to erect a two story brick building for their ‘Feed Store’ and Mill for grinding Corn and Feed.
The remainder of the property occupied by the Bortle Saloon, has been purchased by Janet Campbell…

April 15-
Leonard Do'oge, Grand Rapids, died at age 71. Born in Providence of Zealand, Netherlands in 1816, came to America in 1846. He is the father of Benjamin L. Do'oge of the Normal College.

Less than 13 months ago, E.C. Bowling and H.P. Glover entered Partnership under the name: Ypsilanti Dress Stay Mfg., Co. The Dress Stay had been patented by Bowling. They now have 12 representatives on the road.

April 15-
“less than 13 months ago, E.C. Bowling and H.P. Glover entertained into Partnership under the name; Ypsilanti Underwear.

The railroad spur is now open to the Ypsilanti Paper Company through Parson's Lumber Yard.

E. E. Ferguson, Normal School graduate in 1885 is home having been obliged by ill health to resign his position as Principal of a High School in northern part of State.

May 21-
Blacksmithing by John Renton on Cross Street opposite O. E. Thompson at the Depot.

June 8-
McPherson & Scott have purchased the North Washington business of Hiram Batchelder together with his stock and tools. He is retiring.

June 21-
Austin George Building, a brick of two story stores at Adams and West Congress (Michigan Ave) are for rent.

July 8-
Doctor Frank Owen is building himself an &dollar;8000 residence on North Adams.

July 22-
Winsor McKay, Cleary Business College, Artist has returned from a visit to his home.

January 6th-
“wait for Humphrey successor to Lewis & Gibson, ground floor Gallery in the rooms now occupied by George Witmire as a barber shop opposite the Sanitarium on Huron Street”.

George Moorman buys out Cornwell and becomes sole owner of the Ypsilanti Sanitarium on Huron Street.

Del Harris is moving his goods to the house of Mrs. Grove Sanders on the Chicago Road having rented that farm in Pittsfield Township.

Dr. A. B. Spinney, Superintendent of Ypsilanti Sanitarium.

May 5-
Normal College item… Lawn Tennis is all the rage.

Railroad proposed from Ypsilanti to Belleville and to Trenton. Railroad siding to be run thru Parson's Lumber yard and below the level of South Grove to the Cornwell Mill on the river beolow Spring Street, now the location of the Ford Generator Plant.

June 5-
New brick Church to be built at Stoney Creek by the Methodists.

Joe H. Manning has purchased the Cigar & Confection stock at No. 7 Union Building and will conduct business there.

June 23-
The contract for building the Starkweather Memorial Chapel has been given to E. C. Warner and Mr. Walker, the latter of Ann Arbor, &dollar;7,555.00

July 7-
The Electrical contract with the Jenny Electric Light Co., of Indianapolis has been let for 5 Electric Light Towers besides arm street lights.

A long article about the death of Lambert Barnes.

August 25-
Charles Ferrier has entirely remodeled his large brick residence on Adams Street. The roof is raised, a story added to the wings, a handsome porch built on the front. Double doors and archways put in. The cost will be &dollar;3,000.00.

William McAndrew departed this week for Chicago ready to begin his School duties.

September 8-
R. M. Hemphill has purchased what is known as the Follett residence on Huron Street owned by Mrs. N. K. Seever.

Nine divorces granted during the month of August and B new bills for Divorce were filed.

Attorney Whitman at the City Council meeting submitted a written opinion that there was no question of the City's right to remove the bodies and Monuments from Prospect Cemetery to the new Cemetery, Highland on River Street.

A Reception will be given at St. Luke's, September 23rd to commemorate the 50th Anniversary of the organization of the Church.

Windsor McCay, the gifted young artist, who recently graduated from Cleary's Business College is this week giving exhibitions of his skill and geniousness in Detroit-He recently gave a chalk talk before one of the Normal Societies and astonished all who for the first time saw pictures form under his swift touches.

William Hay has nearly completed a very handsome house on Ballerd Street-427 is the number. Quite ornate outside and cherry wood interior. Samuel Hand is builder.

The currant is expected to be turned on for the Towers November 15th. E.H. Jackson was appointed lineman.

At the Annual meeting of the 20th Michigan Infantry, held in Charlotte this last weak. A. A. Van Cleve of Ypsilanti was elected President; Oscar Loveland of York, Vice President and Clark S. Wortley, Secretary-Treasurer. The next Annual meeting will be held in Ypsilanti.

W.H. Hall-Harness maker and dealer at the corner of Congress and Washington.
Bear, Wolf and Goat Robes

November 17-
One of Ypsilanti's handsome residences will be that of R.W. Hemphill now nearly completed after raising the roof and other alterations.

Annual meeting of the Stockholders of the Ypsilanti Gas Company.
C.S. Wortley, Secretary.