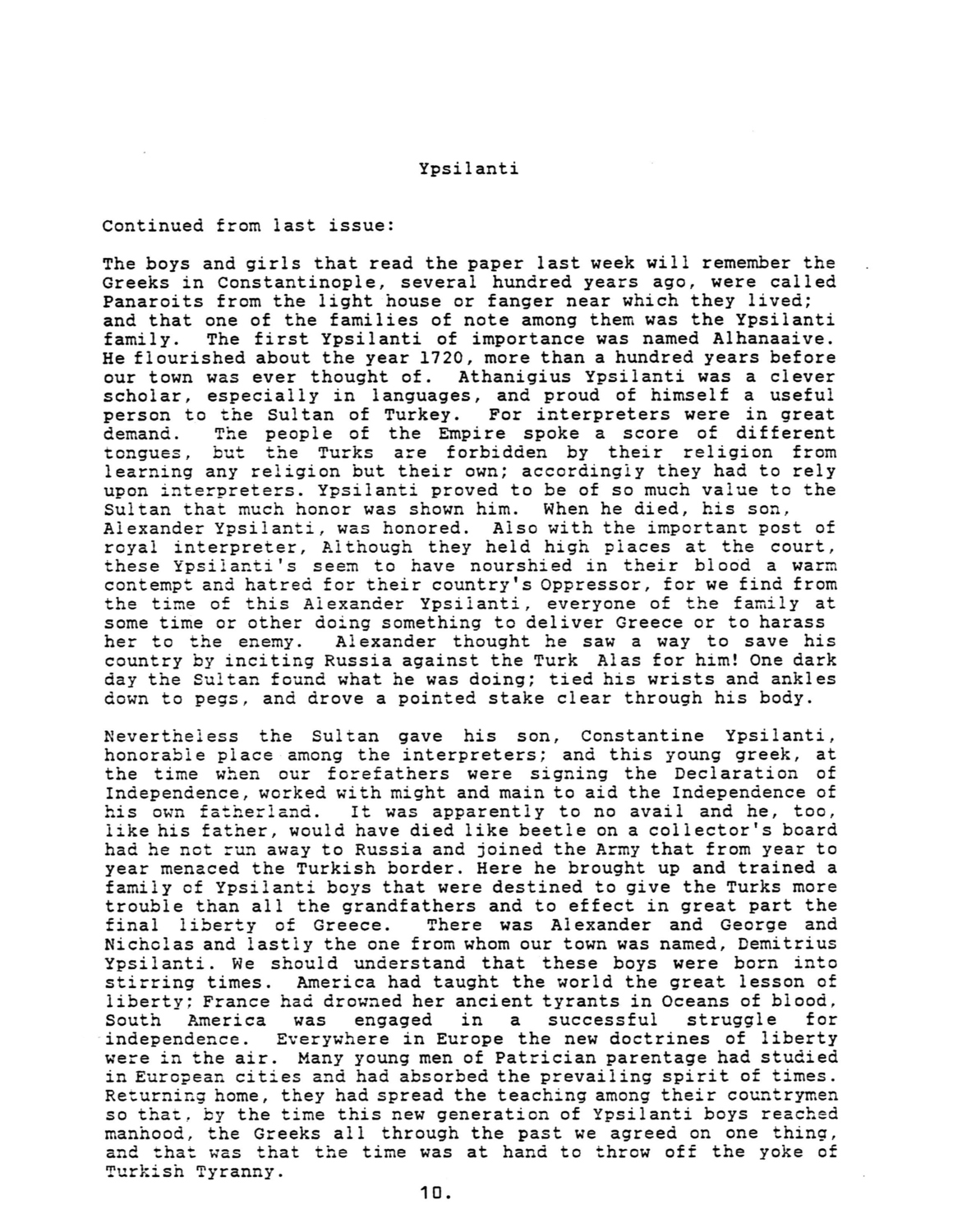 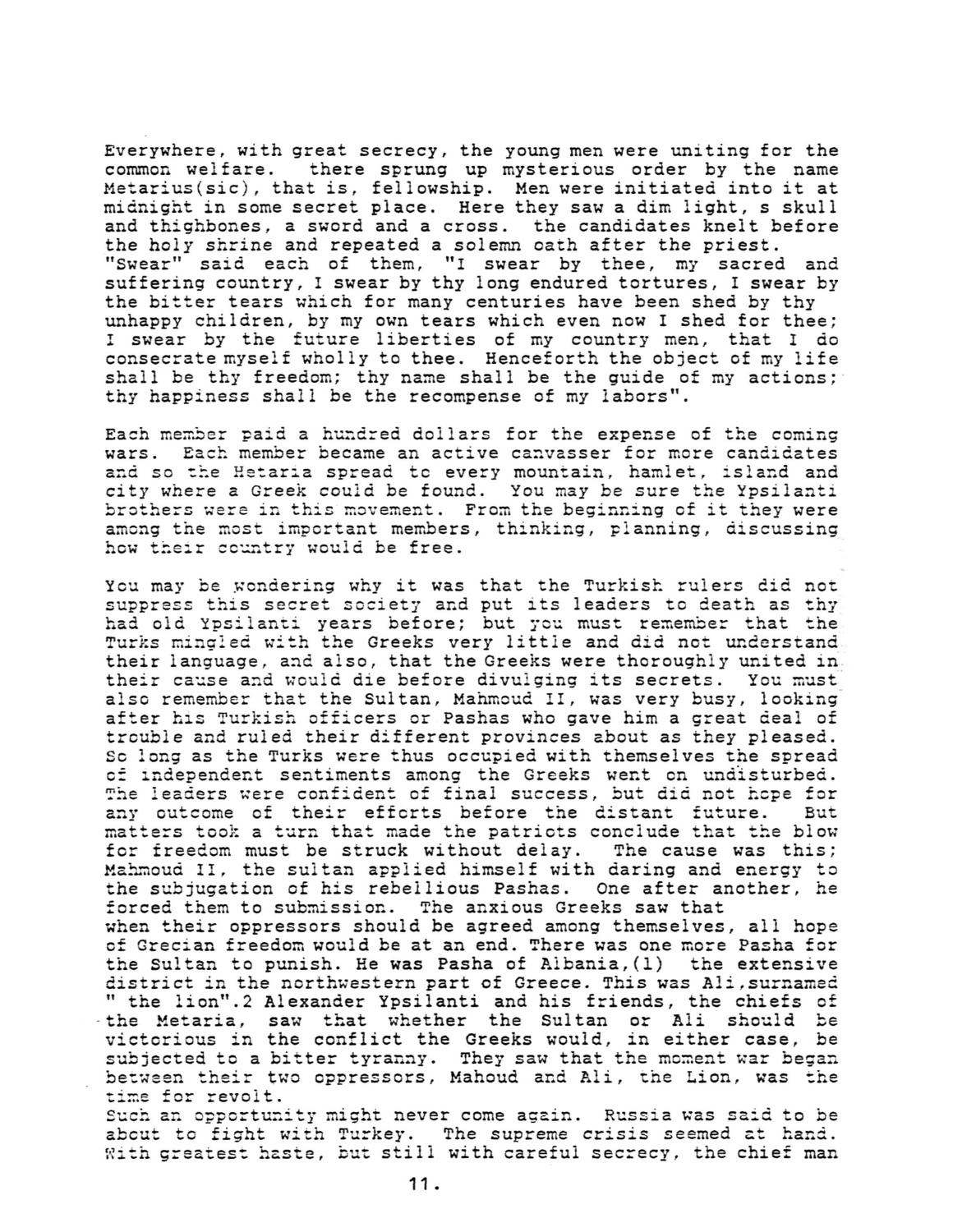 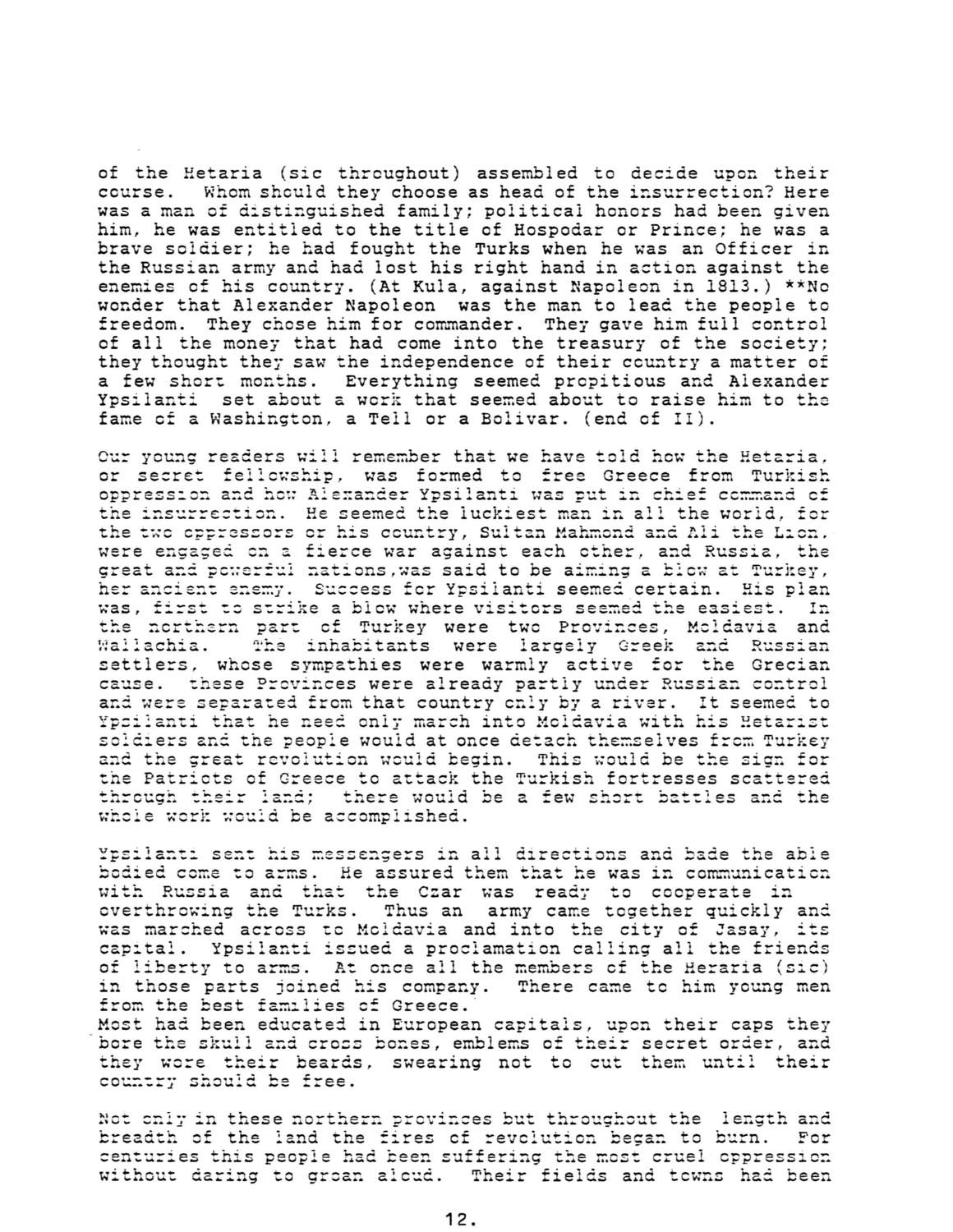 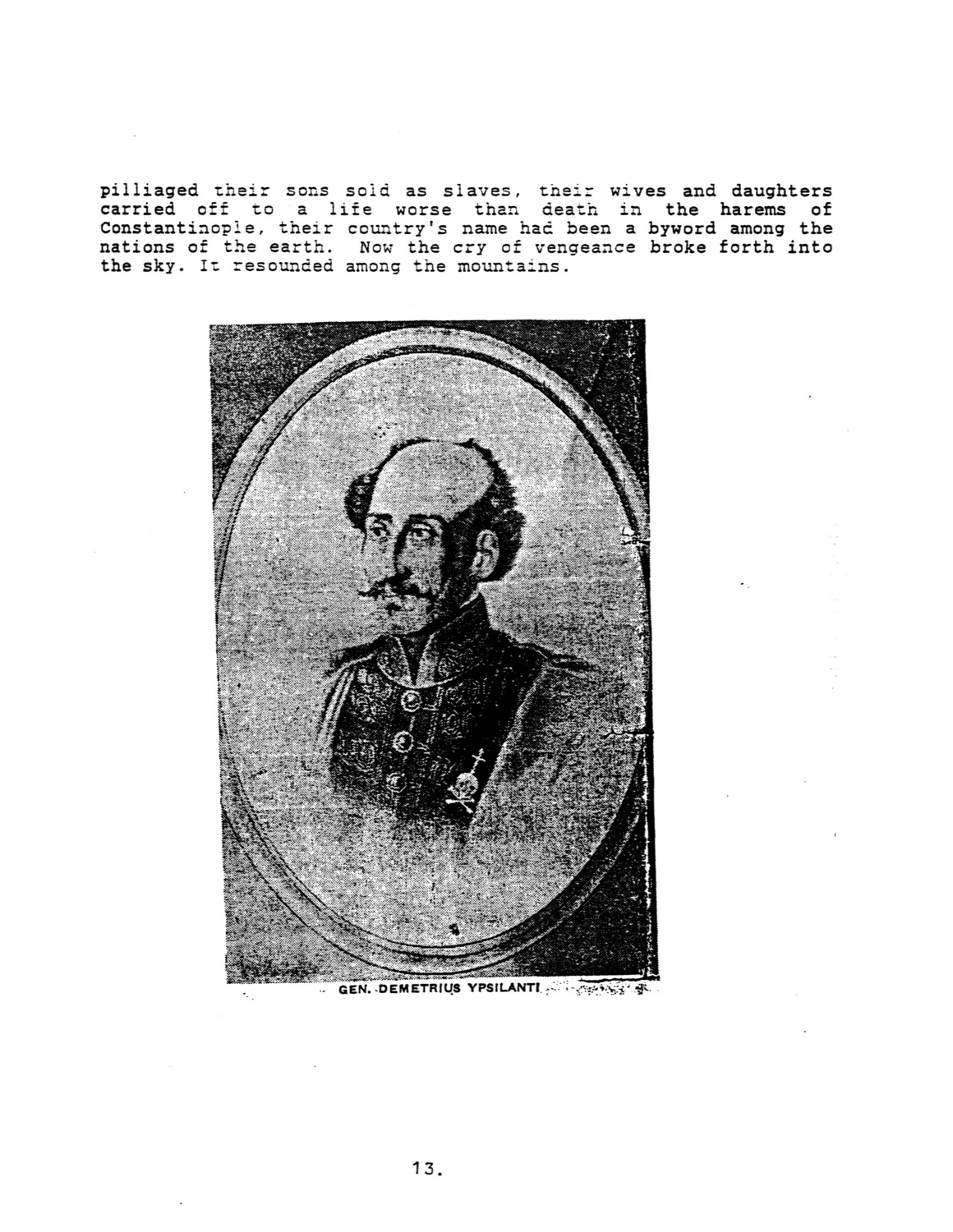 The boys and girls that read the paper last week will remember the Greeks in Constantinople, several hundred years ago, were called Panaroits from the light house or fanger near which they lived; and that one of the families of note among them was the Ypsilanti family. The first Ypsilanti of importance was named Alhanaaive. He flourished about the year 1720, more than a hundred years before our town was ever thought of. Athanigius Ypsilanti was a clever scholar, especially in languages, and proud of himself a useful person to the Sultan of Turkey. For interpreters were in great demand. The people of the Empire spoke a score of different tongues, but the Turks are forbidden by their religion from learning any religion but their own; accordingly they had to rely upon interpreters. Ypsilanti proved to be of so much value to the Sultan that much honor was shown him. When he died, his son, Alexander Ypsilanti, was honored. Also with the important post of royal interpreter, Although they held high places at the court, these Ypsilanti's seem to have nourshied in their blood a warm contempt and hatred for their country's Oppressor, for we find from the time of this Alexander Ypsilanti, everyone of the family at some time or other doing something to deliver Greece or to harass her to the enemy. Alexander thought he saw a way to save his country by inciting Russia against the Turk Alas for him! One dark day the Sultan found what he was doing; tied his wrists and ankles down to pegs, and drove a pointed stake clear through his body.

Nevertheless the Sultan gave his son, Constantine Ypsilanti, honorable place among the interpreters; and this young greek, at the time when our forefathers were signing the Declaration of Independence, worked with might and main to aid the Independence of his own fatherland. It was apparently to no avail and he, too, like his father, would have died like beetle on a collector's board had he not run away to Russia and joined the Army that from year to year menaced the Turkish border. Here he brought up and trained a family of Ypsilanti boys that were destined to give the Turks more trouble than all the grandfathers and to effect in great part the final liberty of Greece. There was Alexander and George and Nicholas and lastly the one from whom our town was named, Demitrius Ypsilanti. We should understand that these boys were born into stirring times. America had taught the world the great lesson of liberty; France had drowned her ancient tyrants in Oceans of blood, South America was engaged in a successful struggle for independence. Everywhere in Europe the new doctrines of liberty were in the air. Many young men of Patrician parentage had studied in European cities and had absorbed the prevailing spirit of times. Returning home, they had spread the teaching among their countrymen so that, by the time this new generation of Ypsilanti boys reached manhood, the Greeks all through the past we agreed on one thing, and that was that the time was at hand to throw off the yoke of Turkish Tyranny.

Everywhere, with great secrecy, the young men were uniting for the common welfare, there sprung up mysterious order by the name Metarius(sic), that is, fellowship. Men were initiated into it at midnight in some secret place. Here they saw a dim light, s skull and thighbones, a sword and a cross. the candidates knelt before the holy shrine and repeated a solemn oath after the priest.

“Swear” said each of them, “I swear by thee, my sacred and suffering country, I swear by thy long endured tortures, I swear by the bitter tears which for many centuries have been shed by thy unhappy children, by my own tears which even now I shed for thee; I swear by the future liberties of my country men, that I do consecrate myself wholly to thee. Henceforth the object of my life shall be thy freedom; thy name shall be the guide of my actions; thy happiness shall be the recompense of my labors”.

Each member paid a hundred dollars for the expense of the coming wars. Each member became an active canvasser for more candidates and so the Hetaria spread to every mountain, hamlet, island and city where a Greek could be found. You may be sure the Ypsilanti brothers were in this movement. From the beginning of it they were among the most important members, thinking, planning, discussing how their country would be free.

You may be wondering why it was that the Turkish rulers did not suppress this secret society and put its leaders to death as thy had old Ypsilanti years before; but you must remember that the Turks mingled with the Greeks very little and did not understand their language, and also, that the Greeks were thoroughly united in their cause and would die before divulging its secrets. You must also remember that the Sultan, Mahmoud II, was very busy, looking after his Turkish officers or Pashas who gave him a great deal of trouble and ruled their different provinces about as they pleased. So long as the Turks were thus occupied with themselves the spread of independent sentiments among the Greeks went on undisturbed. The leaders were confident of final success, but did not hope for any outcome of their efforts before the distant future. But matters took a turn that made the patriots conclude that the blow for freedom must be struck without delay. The cause was this; Mahmoud II, the sultan applied himself with daring and energy to the subjugation of his rebellious Pashas. One after another, he forced them to submission. The anxious Greeks saw that when their oppressors should be agreed among themselves, all hope of Grecian freedom would be at an end. There was one more Pasha for the Sultan to punish. He was Pasha of Albania, (1) the extensive district in the northwestern part of Greece. This was Ali, surnamed “the lion”.2 Alexander Ypsilanti and his friends, the chiefs of the Metaria, saw that whether the Sultan or Ali should be victorious in the conflict the Greeks would, in either case, be subjected to a bitter tyranny. They saw that the moment war began between their two oppressors, Mahoud and Ali, the Lion, was the time for revolt.

Such an opportunity might never come again. Russia was said to be about to fight with Turkey. The supreme crisis seemed at hand. With greatest haste, but still with careful secrecy, the chief man of the Hetaria (sic throughout) assembled to decide upon their course. Whom should they choose as head of the insurrection? Here was a man of distinguished family; political honors had been given him, he was entitled to the title of Hospodar or Prince; he was a brave soldier; he had fought the Turks when he was an Officer in the Russian army and had lost his right hand in action against the enemies of his country. (At Kula, against Napoleon in 1813.) **No wonder that Alexander Napoleon was the man to lead the people to freedom. They chose him for commander. They gave him full control of all the money that had come into the treasury of the society; they thought they saw the independence of their country a matter of a few short months. Everything seemed propitious and Alexander Ypsilanti set about a work that seemed about to raise him to the fame of a Washington, a Tell or a Bolivar. (end of II).

Our young readers will remember that we have told how the Hetaria, or secret fellowship, was formed to free Greece from Turkish oppression and how Alexander Ypsilanti was put in chief command of the insurrection. He seemed the luckiest man in all the world, for the two oppressors or his country, Sultan Mahmond and Ali the Lion, were engaged on a fierce war against each other, and Russia, the great and powerful nations, was said to be aiming a blow at Turkey, her ancient enemy. Success for Ypsilanti seemed certain. His plan was, first to strike a blow where visitors seemed the easiest. In the northern part of Turkey were two Provinces, Moldavia and Wallachia. The inhabitants were largely Greek and Russian settlers, whose sympathies were warmly active for the Grecian cause, these Provinces were already partly under Russian control and were separated from that country only by a river. It seemed to Ypsilanti that he need only march into Moldavia with his Hetarist soldiers and the people would at once detach themselves from Turkey and the great revolution would begin. This would be the sign for the Patriots of Greece to attack the Turkish fortresses scattered through their land; there would be a few short battles and the whole work would be accomplished.

Ypsilanti sent his messengers in all directions and bade the able bodied come to arms. He assured them that he was in communication with Russia and that the Czar was ready to cooperate in overthrowing the Turks. Thus an army came together quickly and was marched across to Moldavia and into the city of Jasay, its capital. Ypsilanti issued a proclamation calling all the friends of liberty to arms. At once all the members of the Heraria (sic) in those parts joined his company. There came to him young men from the best families of Greece.

Most had been educated in European capitals, upon their caps they bore the skull and cross bones, emblems of their secret order, and they wore their beards, swearing not to out them until their country should be free.

Not only in these northern provinces but throughout the length and breadth of the land the fires of revolution began to burn. For centuries this people had been suffering the most cruel oppression without daring to groan aloud. Their fields and towns had been pilliaged their sons sold as slaves, their wives and daughters carried off to a life worse than death in the harems of Constantinople, their country's name had been a byword among the nations of the earth. Now the cry of vengeance broke forth into the sky. It resounded among the mountains.