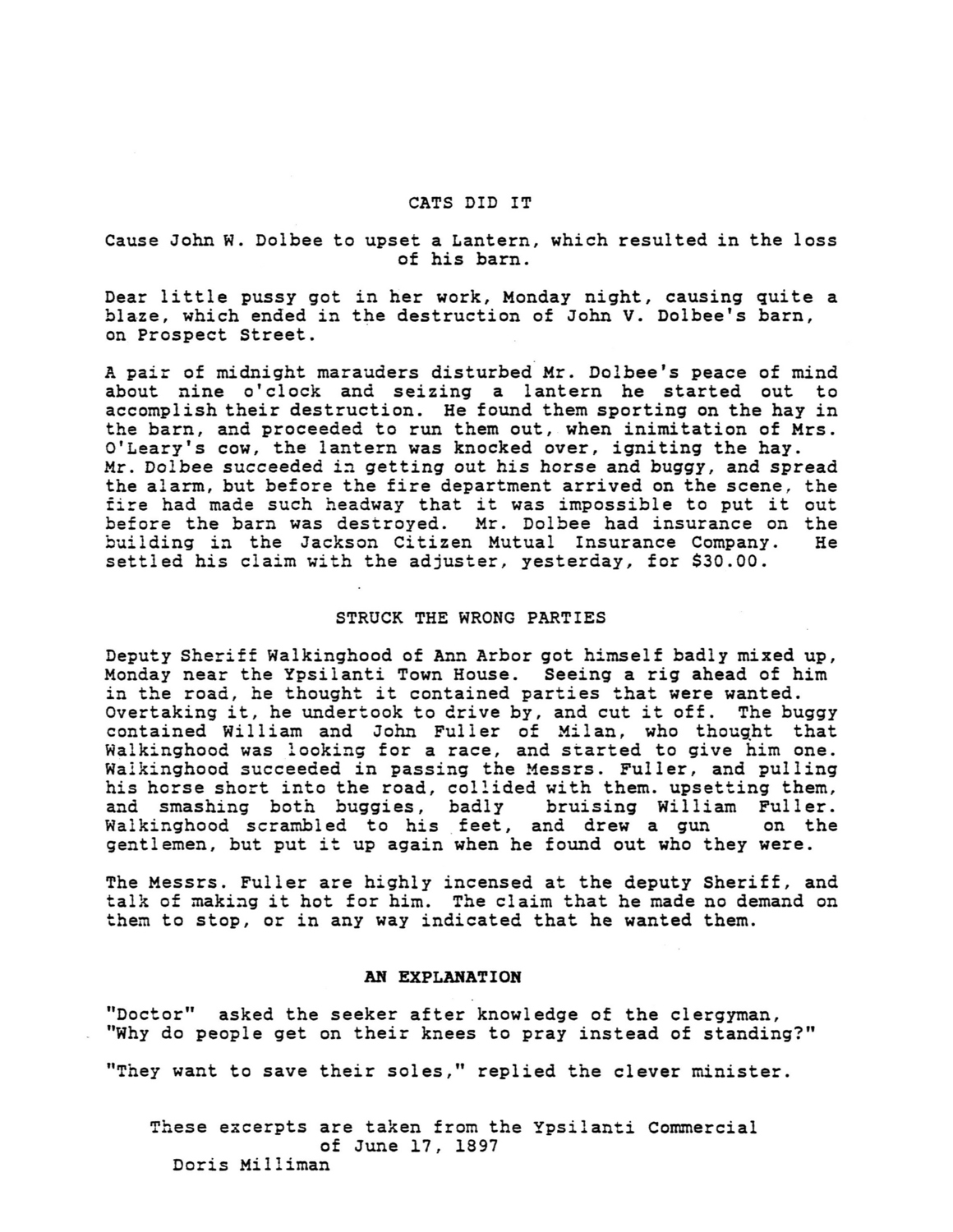 Cause John W. Dolbee to upset a Lantern, which resulted in the loss
of his barn.

Dear little pussy got in her work, Monday night, causing quite a blaze, which ended in the destruction of John V. Dolbee's barn, on Prospect Street.

A pair of midnight marauders disturbed Mr. Dolbee's peace of mind about nine o'clock and seizing a lantern he started out to accomplish their destruction. He found them sporting on the hay in the barn, and proceeded to run them out, when inimitation of Mrs. O'Leary's cow, the lantern was knocked over, igniting the hay. Mr. Dolbee succeeded in getting out his horse and buggy, and spread the alarm, but before the fire department arrived on the scene, the fire had made such headway that it was impossible to put it out before the barn was destroyed. Mr. Dolbee had insurance on the building in the Jackson Citizen Mutual Insurance Company. He settled his claim with the adjuster, yesterday, for $30.00.

Deputy Sheriff Walkinghood of Ann Arbor got himself badly mixed up, Monday near the Ypsilanti Town House. Seeing a rig ahead of him in the road, he thought it contained parties that were wanted. Overtaking it, he undertook to drive by, and cut it off. The buggy contained William and John Fuller of Milan, who thought that Walkinghood was looking for a race, and started to give him one. Walkinghood succeeded in passing the Messrs. Fuller, and pulling his horse short into the road, collided with them, upsetting them, and smashing both buggies, badly bruising William Fuller. Walkinghood scrambled to his feet, and drew a gun on the gentlemen, but put it up again when he found out who they were.

The Messrs. Fuller are highly incensed at the deputy Sheriff, and talk of making it hot for him. The claim that he made no demand on them to stop, or in any way indicated that he wanted them.

“Doctor” asked the seeker after knowledge of the clergyman.

“Why do people get on their knees to pray instead of standing?”

“They want to save their soles,” replied the clever minister.

These excerpts are taken from the Ypsilanti Commercial
of June 17, 1897