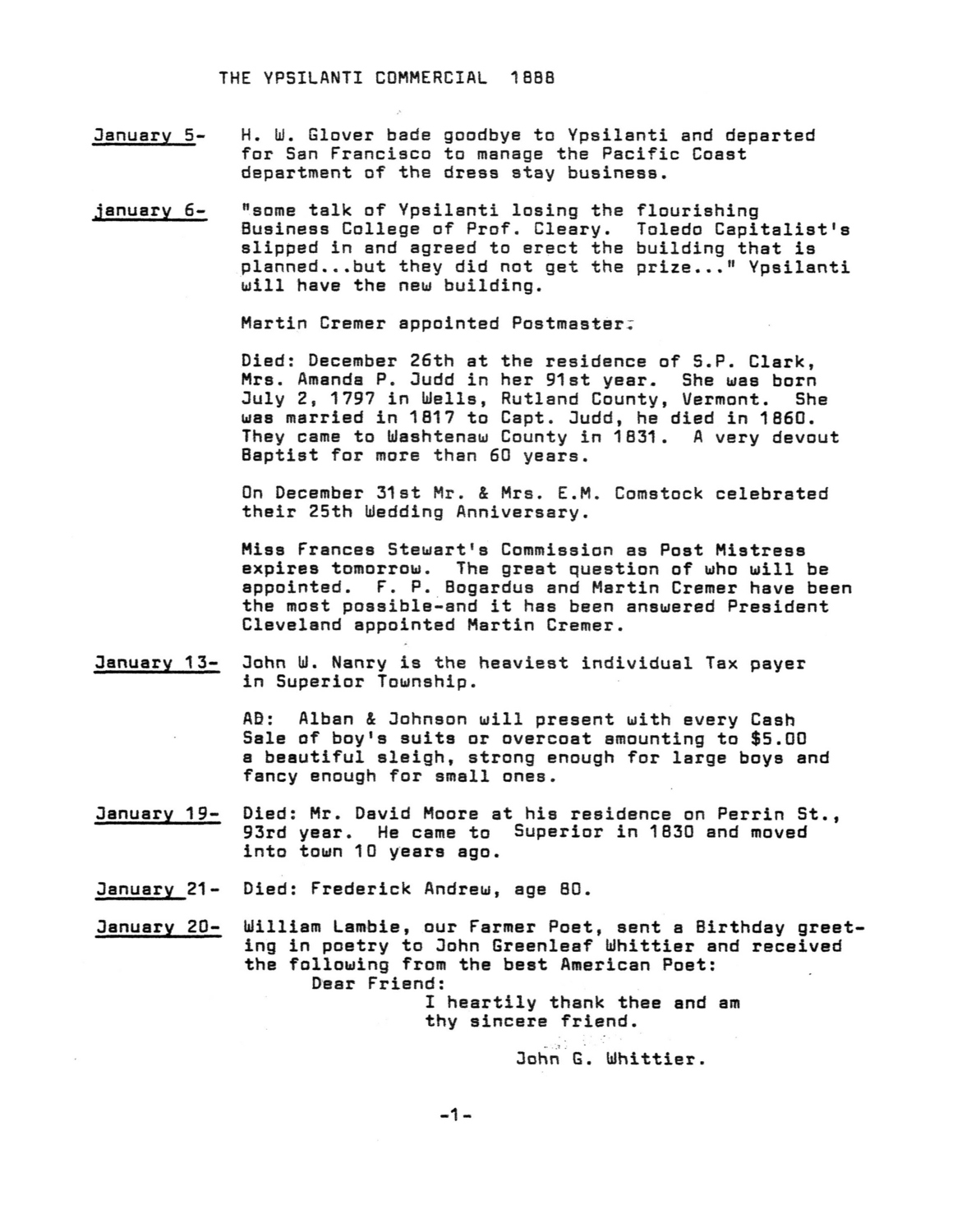 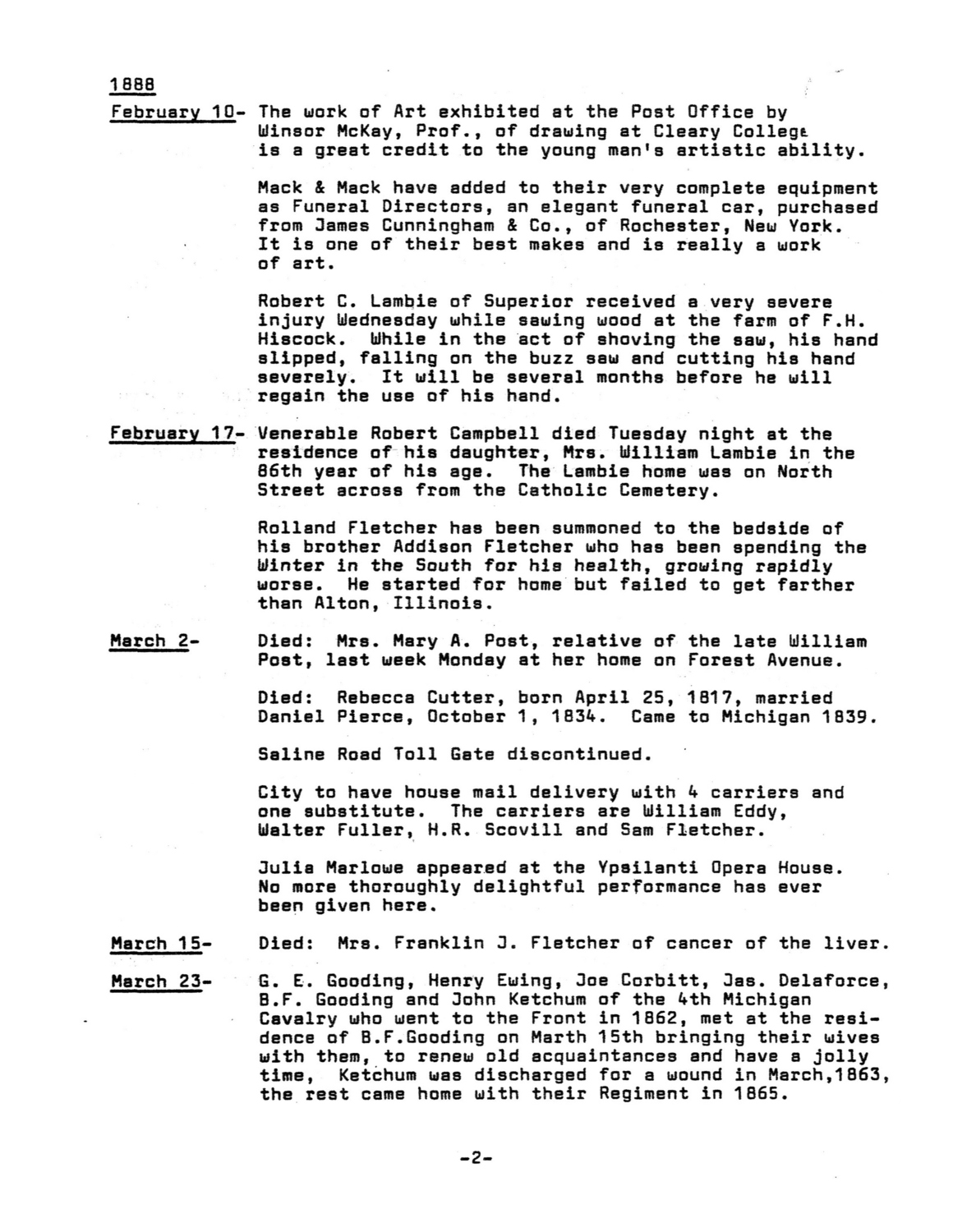 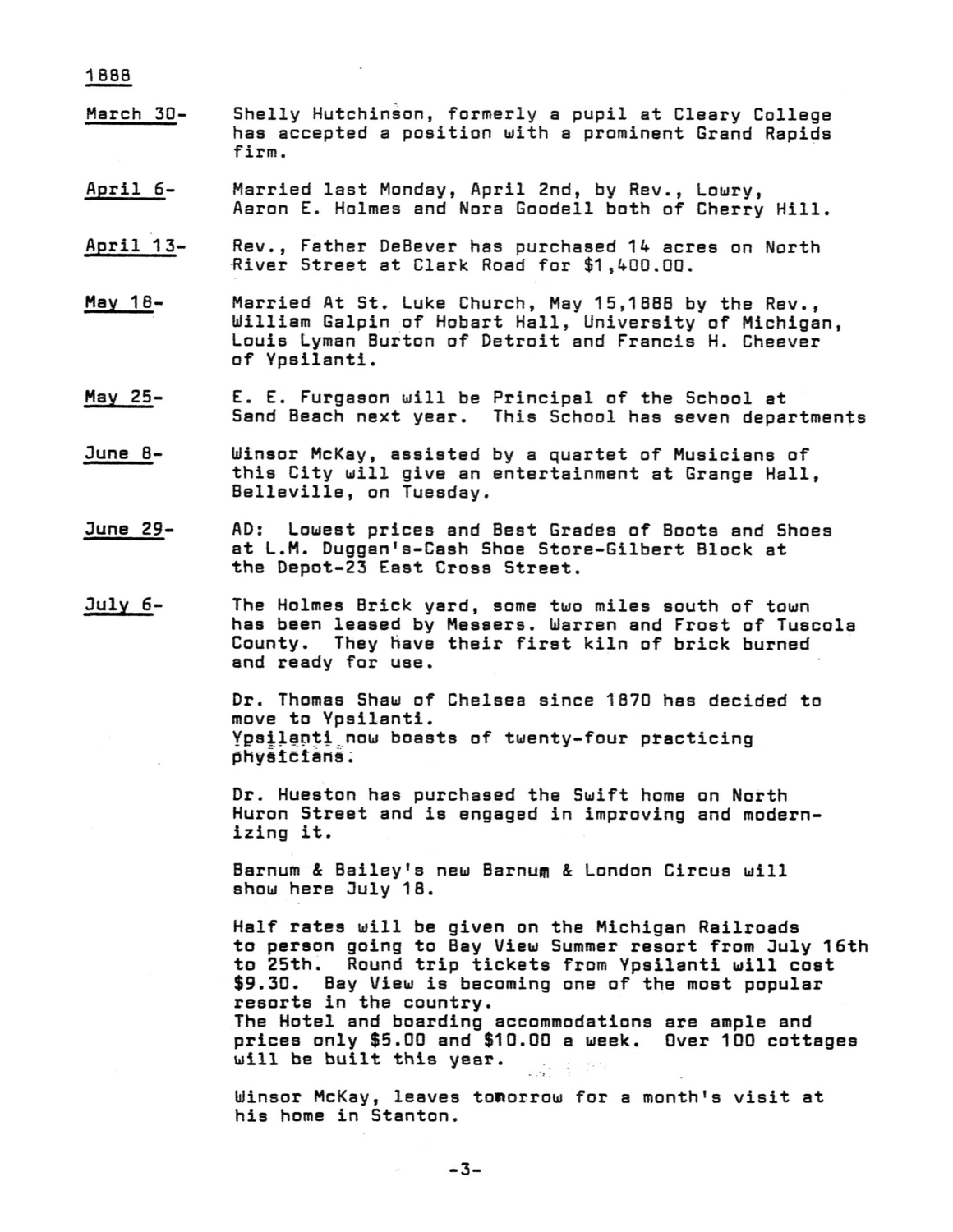 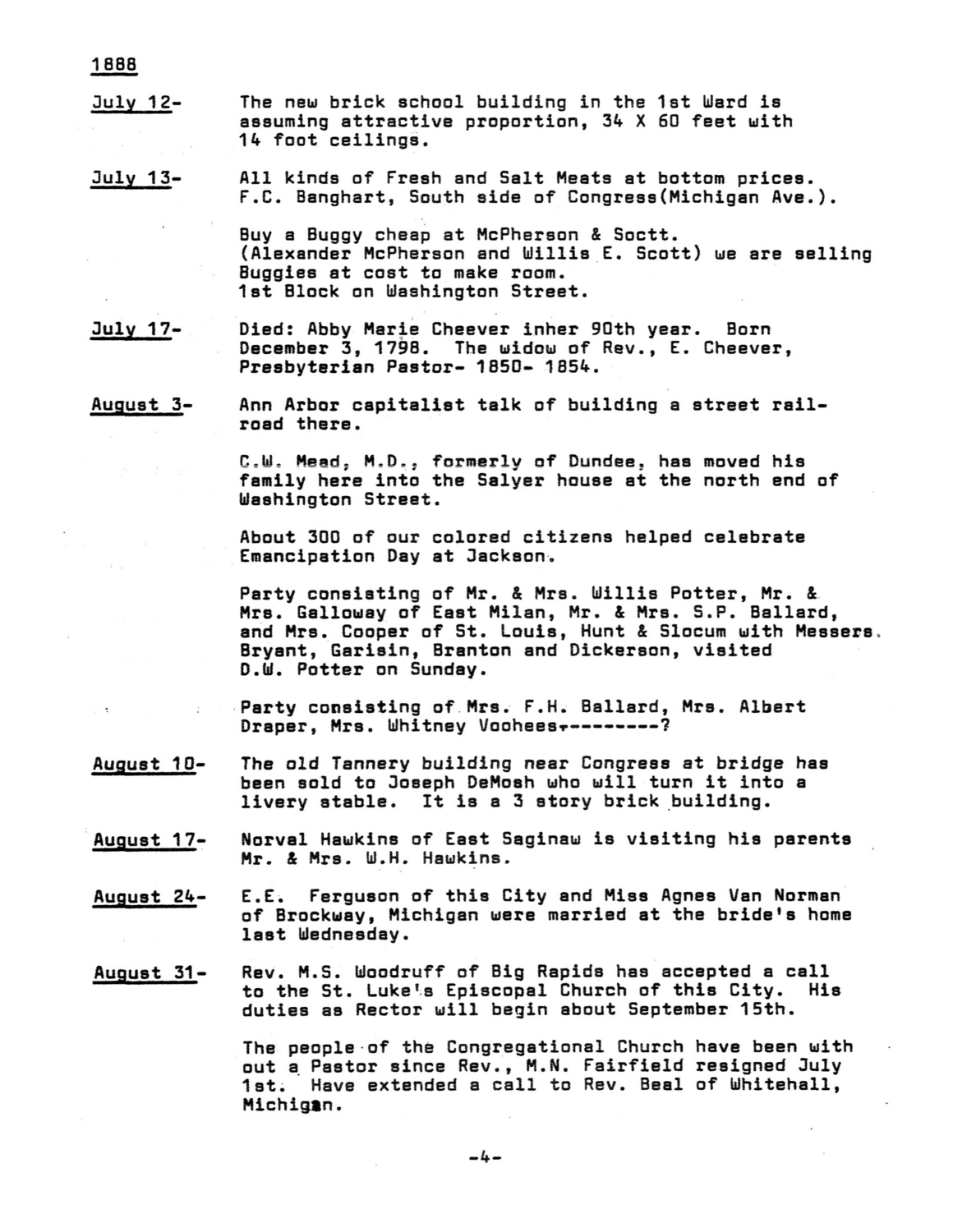 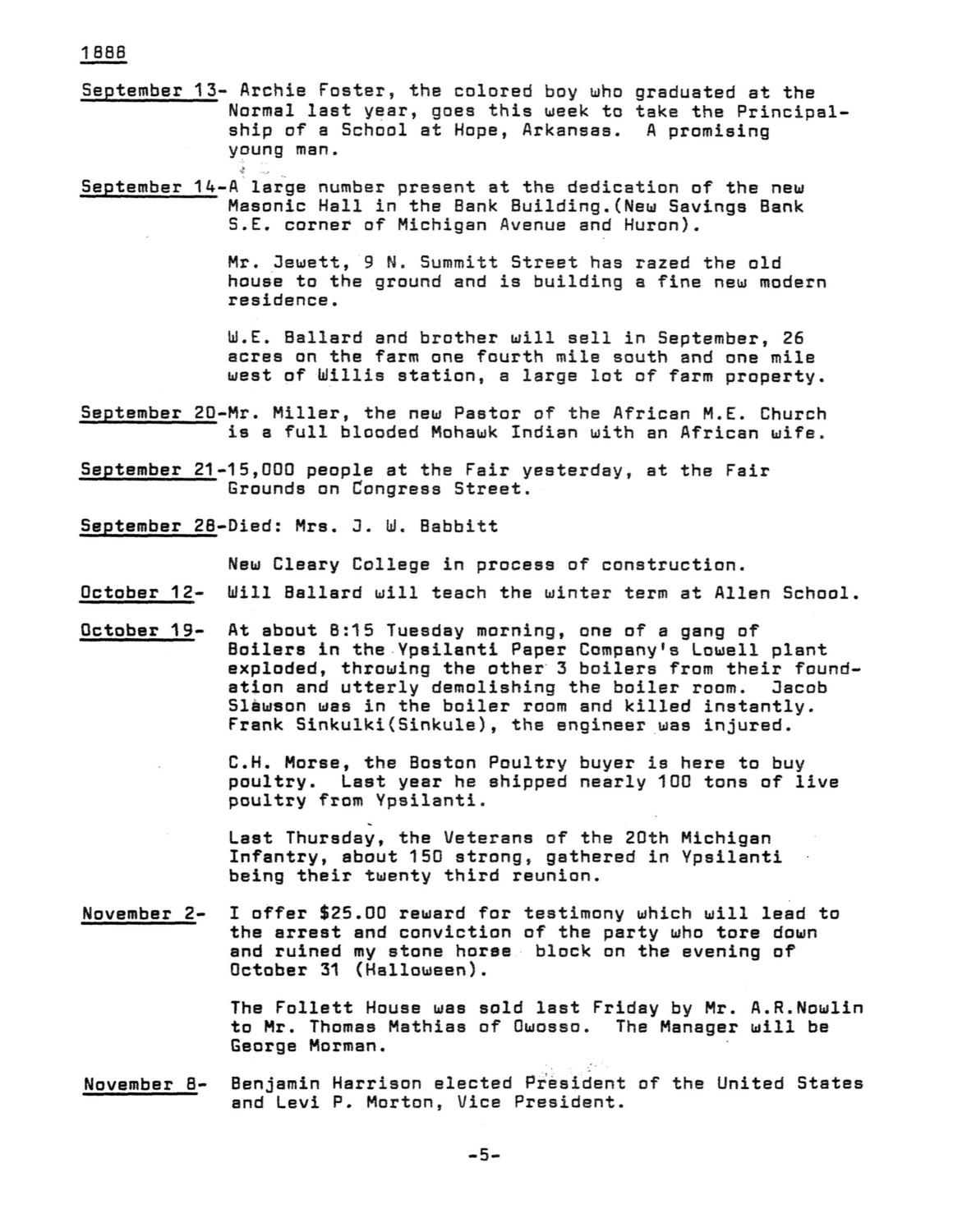 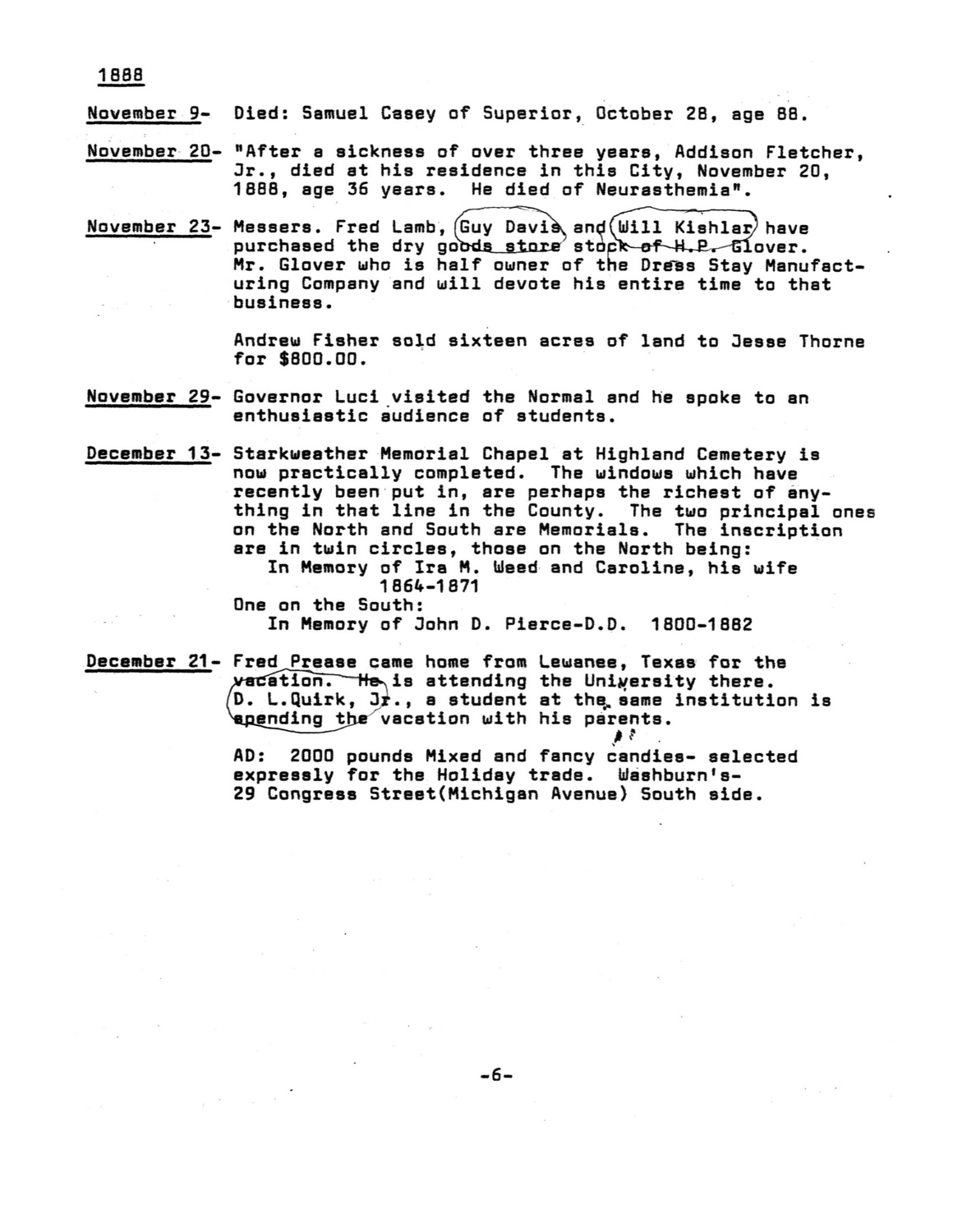 H. W. Glover bade goodbye to Ypsilanti and departed for San Francisco to manage the Pacific Coast department of the dress stay business.

"some talk of Ypsilanti losing the flourishing Business College of Prof. Cleary. Toledo Capitalist's slipped in and agreed to erect the building that is planned...but they did not get the prize..." Ypsilanti will have the new building.

Miss Frances Stewart's Commission as Post Mistress expires tomorrow. The great question of who will be appointed. F. P. Bogardus and Martin Cremer have been the most possible-and it has been answered President Cleveland appointed Martin Cremer.

AD: Alban & Johnson will present with every Cash Sale of boy's suits or overcoat amounting to $5.00 a beautiful sleigh, strong enough for large boys and fancy enough for small ones.

William Lambie, our Farmer Poet, sent a Birthday greeting in poetry to John Greenleaf Whittier and received the following from the best American Post:
Dear Friend:
I heartily thank thee and am thy sincere friend.
John G. Whittier.

The work of Art exhibited at the Post Office by Winsor McKay, Prof., of drawing at Cleary College is a great credit to the young man's artistic ability.

Mack & Mack have added to their very complete equipment as Funeral Directors, an elegant funeral car, purchased from James Cunningham & Co., of Rochester, New York. It is one of their best makes and is really a work of art.

Robert C. Lambie of Superior received a very severe injury Wednesday while sawing wood at the farm of F.H. Hiscock. While in the act of shoving the saw, his hand slipped, falling on the buzz saw and cutting his hand severely. It will be several months before he will regain the use of his hand.

Venerable Robert Campbell died Tuesday night at the residence of his daughter, Mrs. William Lambie in the 86th year of his age. The Lambie home was on North Street across from the Catholic Cemetery.

Rolland Fletcher has been summoned to the bedside of his brother Addison Fletcher who has been spending the Winter in the South for his health, growing rapidly worse. He started for home but failed to get farther than Alton, Illinois.

Died: Mrs. Mary A. Post, relative of the late William Post, last week Monday at her home on Forest Avenue.

City to have house mail delivery with 4 carriers and one substitute. The carriers are William Eddy, Walter Fuller, H.R. Scovill and Sam Fletcher.

Julia Marlowe appeared at the Ypsilanti Opera House. No more thoroughly delightful performance has ever been given here.

Died: Mrs. Franklin J. Fletcher of cancer of the liver.

G. E. Gooding, Henry Ewing, Joe Corbitt, Jas. Delaforce, B.F. Gooding and John Ketchum of the 4th Michigan Cavalry who went to the Front in 1862, met at the residence of B.F. Gooding on Marth 15th bringing their wives with them, to renew old acquaintances and have a jolly time, Ketchum was discharged for a wound in March, 1863, the rest came home with their Regiment in 1865.

Shelly Hutchinson, formerly a pupil at Cleary College has accepted a position with a prominent Grand Rapids firm.

Married At St. Luke Church, May 15, 1888 by the Rev., William Galpin of Hobart Hall, University of Michigan, Louis Lyman Burton of Detroit and Francis H. Cheever of Ypsilanti.

E. E. Furgason will be Principal of the School at Sand Beach next year. This School has seven departments

Winsor McKay, assisted by a quartet of Musicians of this City will give an entertainment at Grange Hall, Belleville, on Tuesday.

The Holmes Brick yard, some two miles south of town has been leased by Messers. Warren and Frost of Tuscola County. They have their first kiln of brick burned and ready for use.

Dr. Thomas Shaw of Chelsea since 1870 has decided to move to Ypsilanti.

Dr. Hueston has purchased the Swift home on North Huron Street and is engaged in improving and modernizing it.

Half rates will be given on the Michigan Railroads to person going to Bay View Summer resort from July 16th to 25th. Round trip tickets from Ypsilanti will cost $9.30. Bay View is becoming one of the most popular resorts in the country.

The Hotel and boarding accommodations are ample and prices only $5.00 and $10.00 a week. Over 100 cottages will be built this year.

Winsor McKay, leaves tomorrow for a month's visit at his home in Stanton.

All kinds of Fresh and Salt Meats at bottom prices. F.C. Banghart, South side of Congress (Michigan Ave.).

Buy a Buggy cheap at McPherson & Scott. (Alexander McPherson and Willis E. Scott) we are selling Buggies at cost to make room.

Ann Arbor capitalist talk of building a street railroad there.

C.W. Mead, M.D., formerly of Dundee, has moved his family here into the Salyer house at the north end of Washington Street.

About 300 of our colored citizens helped celebrate Emancipation Day at Jackson.

The old Tannery building near Congress at bridge has been sold to Joseph DeMosh who will turn it into a livery stable. It is a 3 story brick building.

E.E. Ferguson of this City and Miss Agnes Van Norman of Brockway, Michigan were married at the bride's home last Wednesday.

Rev. M.S. Woodruff of Big Rapids has accepted a call to the St. Luke's Episcopal Church of this City. His duties as Rector will begin about September 15th.

The people of the Congregational Church have been with out a Pastor since Rev., M.N. Fairfield resigned July 1st. Have extended a call to Rev. Beal of Whitehall, Michigan.

Archie Foster, the colored boy who graduated at the Normal last year, goes this week to take the Principalship of a School at Hope, Arkansas. A promising young man.

A large number present at the dedication of the new Masonic Hall in the Bank Building. (New Savings Bank S.E. corner of Michigan Avenue and Huron).

Mr. Jewett, 9 N. Summitt Street has razed the old house to the ground and is building a fine new modern residence.

W.E. Ballard and brother will sell in September, 26 acres on the farm one fourth mile south and one mile west of Willis station, a large lot of farm property.

Mr. Miller, the new Pastor of the African M.E. Church is a full blooded Mohawk Indian with an African wife.

Will Ballard will teach the winter term at Allen School.

At about 8:15 Tuesday morning, one of a gang of Boilers in the Ypsilanti Paper Company's Lowell plant exploded, throwing the other 3 boilers from their foundation and utterly demolishing the boiler room. Jacob Slawson was in the boiler room and killed instantly. Frank Sinkulki (Sinkule), the engineer was injured.

Last Thursday, the Veterans of the 20th Michigan Infantry, about 150 strong, gathered in Ypsilanti being their twenty third reunion.

I offer $25.00 reward for testimony which will lead to the arrest and conviction of the party who tore down and ruined my stone horse block on the evening of October 31 (Halloween).

The Follett House was sold last Friday by Mr. A.R. Nowlin to Mr. Thomas Mathias of Owosso. The Manager will be George Morman.

"After a sickness of over three years, Addison Fletcher, Jr., died at his residence in this City, November 20, 1888, age 36 years. He died of Neurasthemia".

Messers. Fred Lamb, Guy Davis and Will Kishlar have purchased the dry goods store stock of H.P. Glover. Mr. Glover who is half owner of the Dress Stay Manufacturing Company and will devote his entire time to that business.

Governor Luci visited the Normal and he spoke to an enthusiastic audience of students.

Starkweather Memorial Chapel at Highland Cemetery is now practically completed. The windows which have recently been put in, are perhaps the richest of anything in that line in the County. The two principal ones on the North and South are Memorials. The inscription are in twin circles, those on the North being:

One on the South:

Fred Prease came home from Lewanee, Texas for the vacation. He is attending the University there. D. L. Quirk, Jr., a student at the same institution is apending the vacation with his parents.