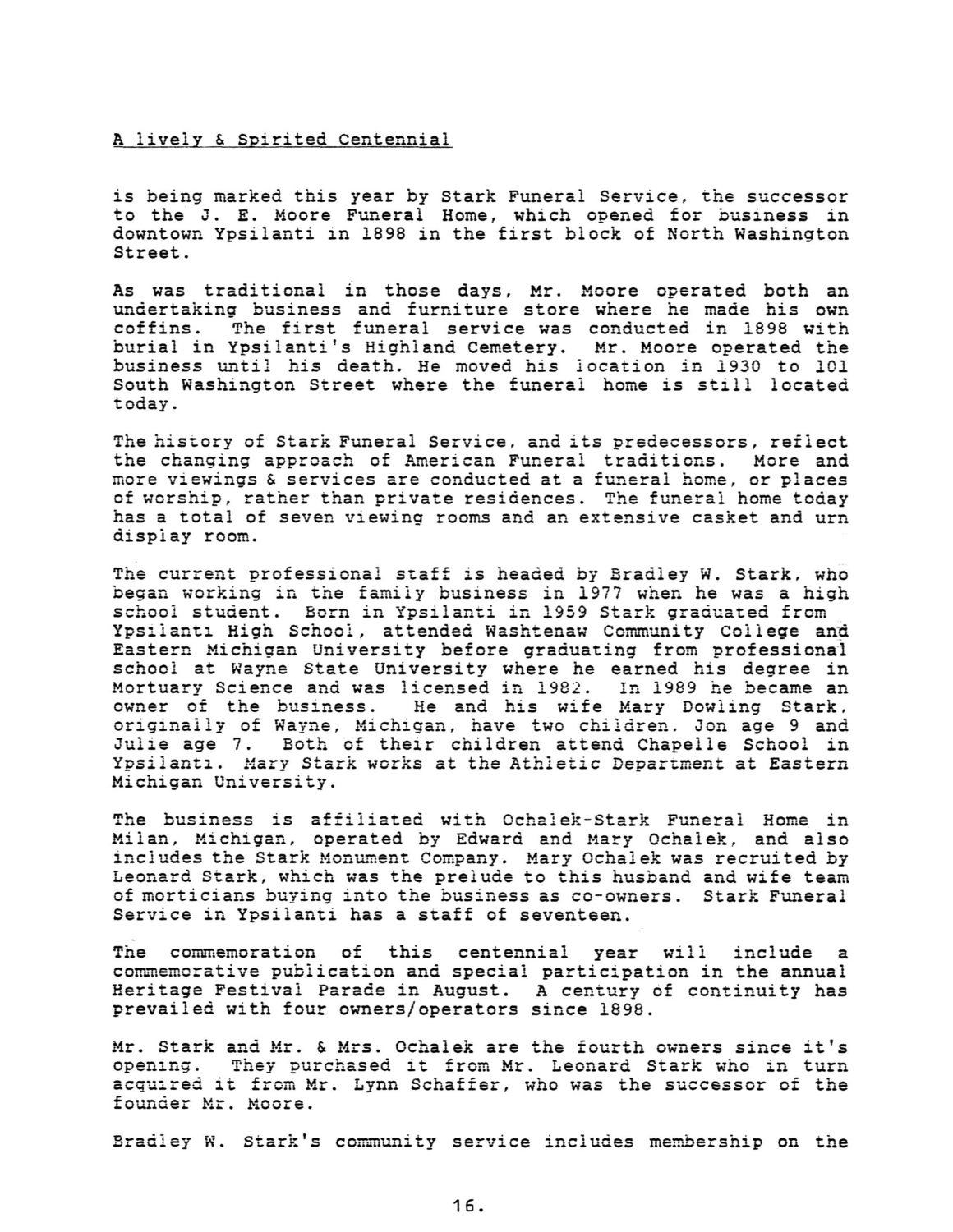 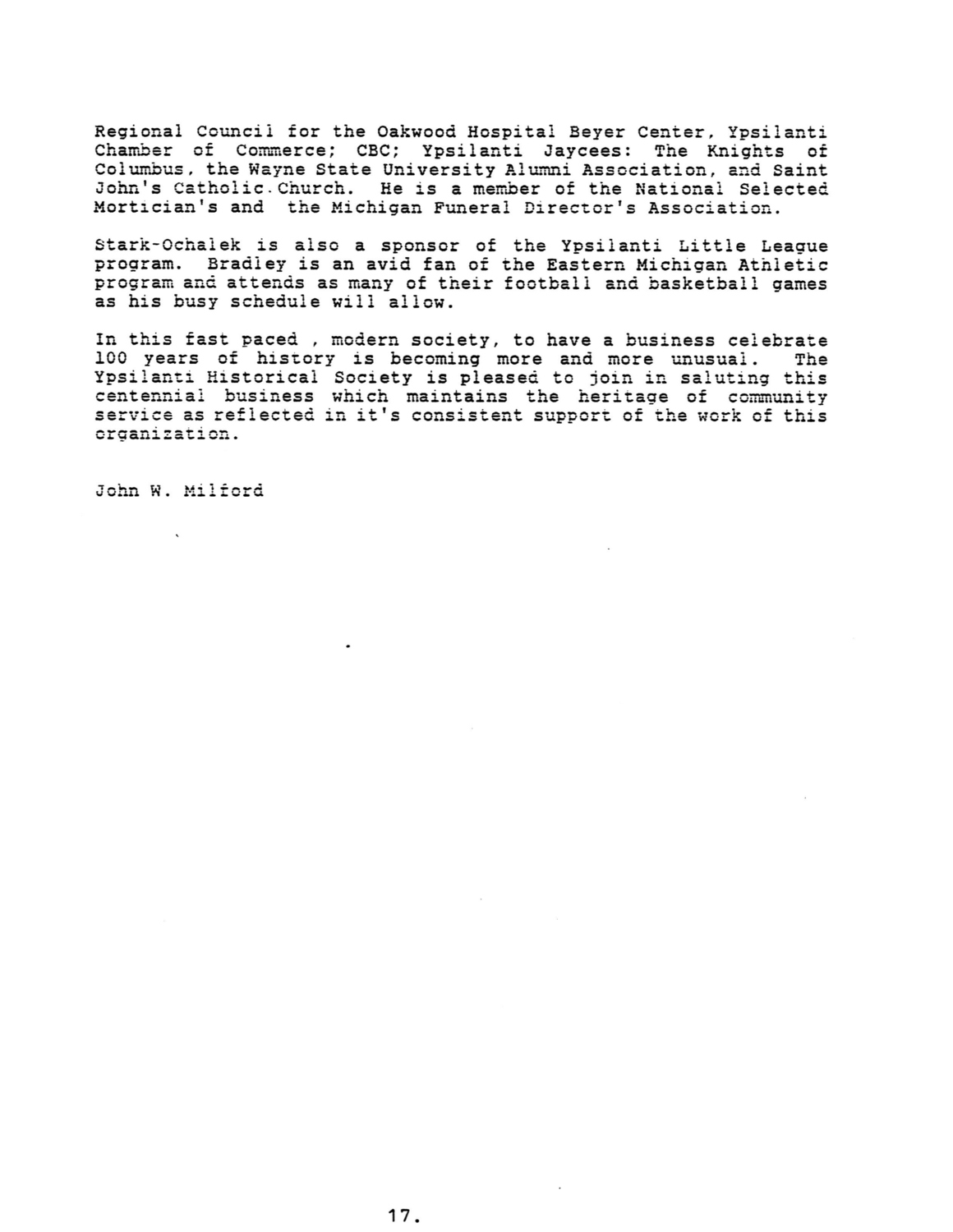 is being marked this year by Stark Funeral Service, the successor to the J. E. Moore Funeral Home, which opened for business in downtown Ypsilanti in 1898 in the first block of North Washington Street.

As was traditional in those days, Mr. Moore operated both an undertaking business and furniture store where he made his own coffins. The first funeral service was conducted in 1898 with burial in Ypsilanti's Highland Cemetery. Mr. Moore operated the business until his death. He moved his location in 1930 to 101 South Washington Street where the funeral home is still located today.

The history of Stark Funeral Service, and its predecessors, reflect the changing approach of American Funeral traditions. More and more viewings & services are conducted at a funeral home, or places of worship, rather than private residences. The funeral home today has a total of seven viewing rooms and an extensive casket and urn display room.

The current professional staff is headed by Bradley W. Stark, who began working in the family business in 1977 when he was a high school student. Born in Ypsilanti in 1959 Stark graduated from Ypsilanti High School, attended Washtenaw Community College and Eastern Michigan University before graduating from professional school at Wayne State University where he earned his degree in Mortuary Science and was licensed in 1982. In 1989 he became an owner of the business. He and his wife Mary Dowling Stark, originally of Wayne, Michigan, have two children. Jon age 9 and Julie age 7. Both of their children attend Chapelle School in Ypsilanti. Mary Stark works at the Athletic Department at Eastern Michigan University.

The business is affiliated with Ochalek-Stark Funeral Home in Milan, Michigan, operated by Edward and Mary Ochalek, and also includes the Stark Monument Company. Mary Ochalek was recruited by Leonard Stark, which was the prelude to this husband and wife team of morticians buying into the business as co-owners. Stark Funeral Service in Ypsilanti has a staff of seventeen.

The commemoration of this centennial year will include a commemorative publication and special participation in the annual Heritage Festival Parade in August. A century of continuity has prevailed with four owners/operators since 1898.

Mr. Stark and Mr. & Mrs. Ochalek are the fourth owners since it's opening. They purchased it from Mr. Leonard Stark who in turn acquired it from Mr. Lynn Schaffer, who was the successor of the founder Mr. Moore.

Bradley W. Stark's community service includes membership on the Regional Council for the Oakwood Hospital Beyer Center, Ypsilanti Chamber of Commerce; CBC; Ypsilanti Jaycees: The Knights of Columbus, the Wayne State University Alumni Association, and Saint John's Catholic.Church. He is a member of the National Selected Mortician's and the Michigan Funeral Director's Association.

Stark-Ochalek is also a sponsor of the Ypsilanti Little League program. Bradley is an avid fan of the Eastern Michigan Athletic program and attends as many of their football and basketball games as his busy schedule will allow.

In this fast paced, modern society, to have a business celebrate 100 years of history is becoming more and more unusual. The Ypsilanti Historical Society is pleased to join in saluting this centennial business which maintains the heritage of community service as reflected in it's consistent support of the work of this organization.

It is now the First of May so if anyone has missed.paying their dues please send them soon as they were due January 1st.