Explanation of Names and Dates in Lambie Diary 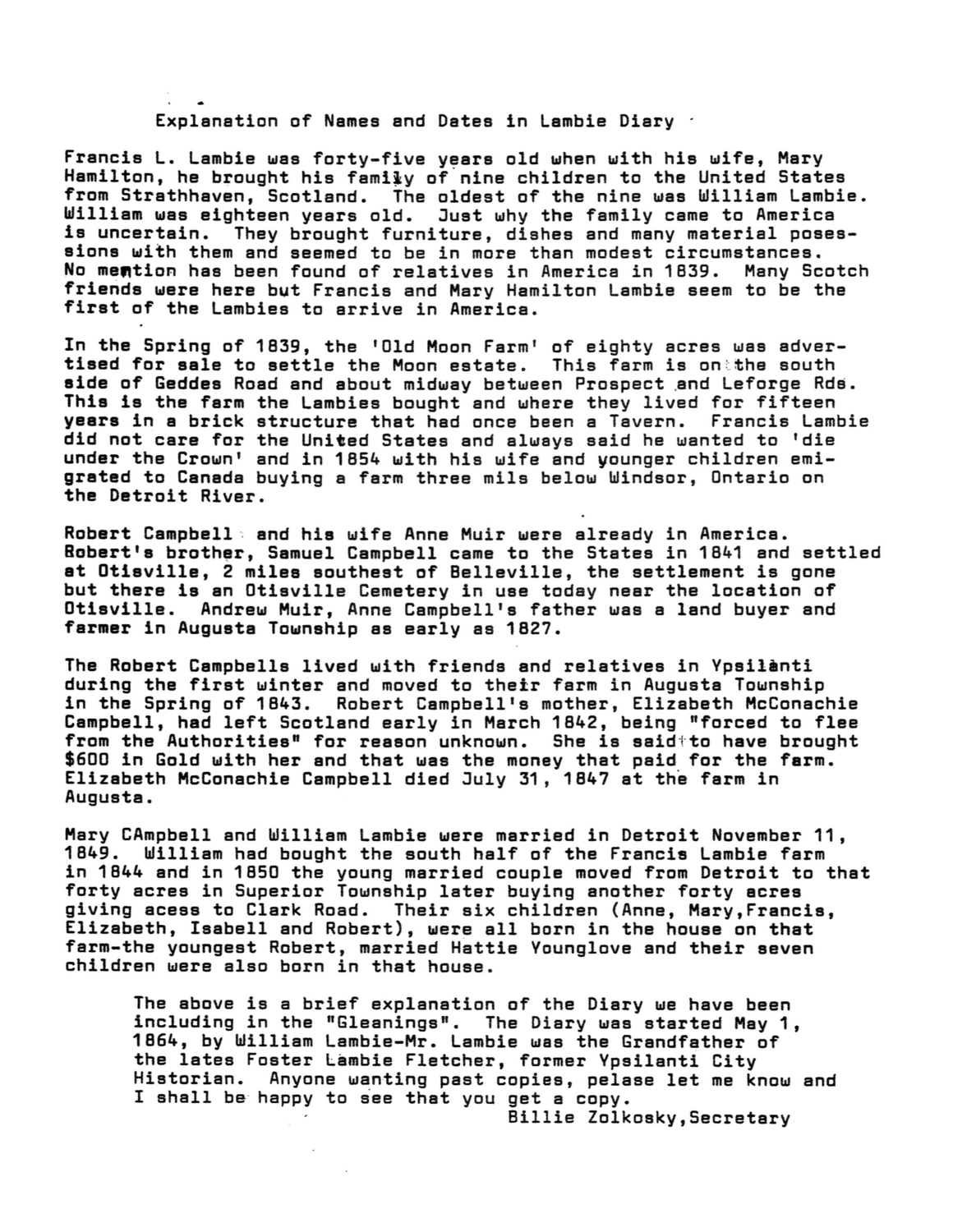 Francis L. Lambie was forty-five years old when with his wife, Mary Hamilton, he brought his family of nine children to the United States from Strathhaven, Scotland. The oldest of the nine was William Lambie. William was eighteen years old. Just why the family came to America is uncertain. They brought furniture, dishes and many material possessions with them and seemed to be in more than modest circumstances. No mention has been found of relatives in America in 1839. Many Scotch friends were here but Francis and Mary Hamilton Lambie seem to be the first of the Lambies to arrive in America.

In the Spring of 1839, the ‘Old Moon Farm’ of eighty acres was advertised for sale to settle the Moon estate. This farm is on the south side of Geddes Road and about midway between Prospect and Leforge Rds. This is the farm the Lambies bought and where they lived for fifteen years in a brick structure that had once been a Tavern. Francis Lambie did not care for the United States and always said he wanted to ‘die under the Crown’ and in 1854 with his wife and younger children emigrated to Canada buying a farm three miles below Windsor, Ontario on the Detroit River.

Robert Campbell and his wife Anne Muir were already in America. Robert's brother, Samuel Campbell came to the States in 1841 and settled at Otisville, 2 miles southest of Belleville, the settlement is gone but there is an Otisville Cemetery in use today near the location of Otisville. Andrew Muir, Anne Campbell's father was a land buyer and farmer in Augusta Township as early as 1827.

The Robert Campbells lived with friends and relatives in Ypsilanti during the first winter and moved to their farm in Augusta Township in the Spring of 1843. Robert Campbell's mother, Elizabeth McConachie Campbell, had left Scotland early in March 1842, being “forced to flee from the Authorities” for reason unknown. She is said to have brought &dollar;600 in Gold with her and that was the money that paid for the farm. Elizabeth McConachie Campbell died July 31, 1847 at the farm in Augusta.

Mary Campbell and William Lambie were marrie in Detroit November 11, 1849. William had bought the south half of the Francis Lambie farm in 1844 and in 1850 the young married couple moved from Detroit to that forty acres in Superior Township later buying another forty acres giving acess to Clark Road. Their six children (Anne, Mary, Francis, Elizabeth, Isabell and Robert), were all born in the house on that farm-the youngest Robert, married Hattie Younglove and their seven children were also born in that house.

The above is a brief explanation of the Diary we have been including in the “Gleanings”. The Diary was started May 1, 1864, by William Lambie-Mr. Lambie was the Grandfather of the lates Foster Lambie Fletcher, former Ypsilanti City Historian. Anyone wanting past copies, pelase let me know and I shall be happy to see that you get a copy.