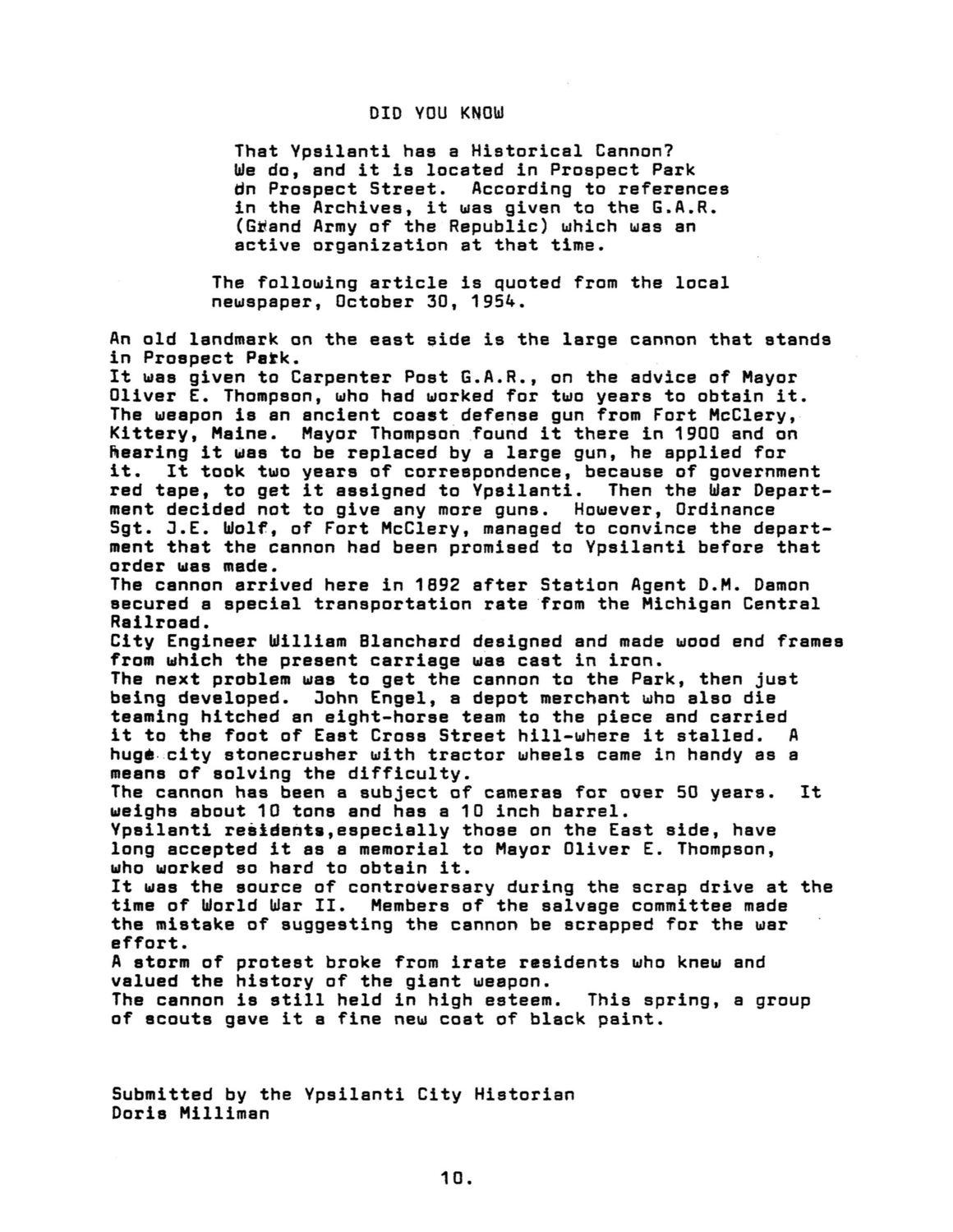 That Ypsilanti has a Historical Cannon? We do, and it is located in Prospect Park on Prospect Street. According to references in the Archives, it was given to the G.A.R. (Grand Army of the Republic) which was an active organization at that time.

The following article is quoted from the local newspaper, October 30, 1954.

An old landmark on the east side is the large cannon that stands in Prospect Park.

It was given to Carpenter Post G.A.R., on the advice of Mayor Oliver E. Thompson, who had worked for two years to obtain it. The weapon is an ancient coast defense gun from Fort McClery, Kittery, Maine. Mayor Thompson found it there in 1900 and on hearing it was to be replaced by a large gun, he applied for it. It took two years of correspondence, because of government red tape, to get it assigned to Ypsilanti. Then the War Department decided not to give any more guns. However, Ordinance Sgt. J.E. Wolf, of Fort McClery, managed to convince the department that the cannon had been promised to Ypsilanti before that order was made.

The cannon arrived here in 1892 after Station Agent D.M. Damon secured a special transportation rate from the Michigan Central Railroad.

City Engineer William Blanchard designed and made wood end frames from which the present carriage was cast in iron.

The next problem was to get the cannon to the Park, then just being developed. John Engel, a depot merchant who also die teaming hitched an eight-horse team to the piece and carried it to the foot of East Cross Street hill-where it stalled. A huge city stonecrusher with tractor wheels came in handy as a means of solving the difficulty.

The cannon has been a subject of cameras for over 50 year. It weighs about 10 tons and has a 10 inch barrel.

Ypsilanti residents, especially those on the East side, have long accepted it as a memorial to Mayor Oliver E. Thompson, who worked so hard to obtain it.

It was the source of controversy during the scrap drive at the time of World War II. Members of the salvage committee made the mistake of suggesting the cannon be scrapped for the war effort.

A storm of protest broke from irate residents who knew and valued the history of the giant weapon.

The cannon is still held in high esteem. This spring, a group of scouts gave it a fine new coat of black paint.