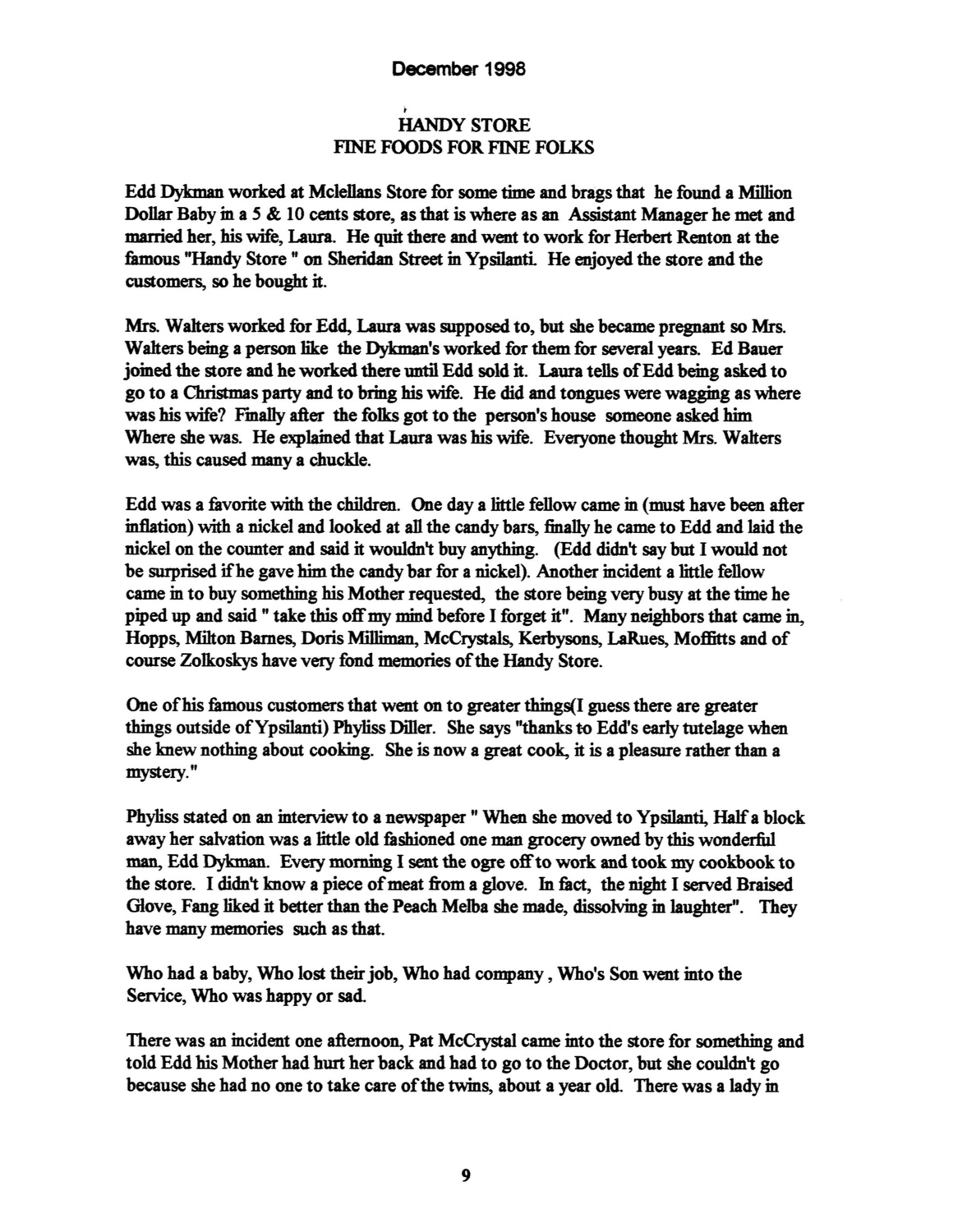 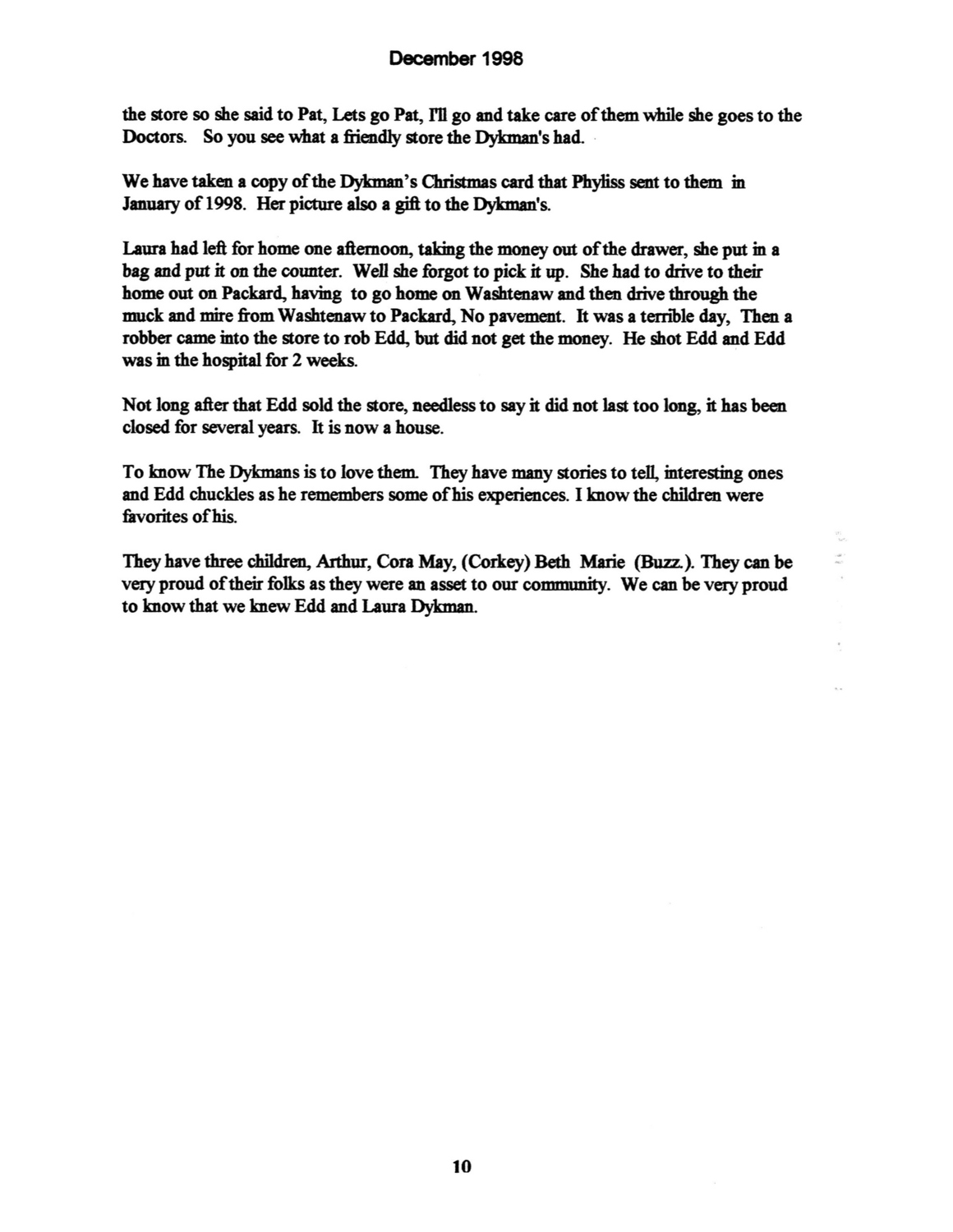 Edd Dykman worked at Mclellans Store for some time and brags that he found a Million Dollar Baby in a 5 & 10 cents store, as that is where as an Assistant Manager he met and married her, his wife, Laura. He quit there and went to work for Herbert Renton at the famous “Handy Store” on Sheridan Street in Ypsilanti. He enjoyed the store and the customers, so he bought it.

Mrs. Walters worked for Edd, Laura was supposed to, but she became pregnant so Mrs. Walters being a person like the Dykman's worked for them for several years. Ed Bauer joined the store and he worked there until Edd sold it. Laura tells of Edd being asked to go to a Christmas party and to bring his wife. He did and tongues were wagging as where was his wife? Finally after the folks got to the person's house someone asked him Where she was. He explained that Laura was his wife. Everyone thought Mrs. Walters was, this caused many a chuckle.

Edd was a favorite with the children. One day a little fellow came in (must have been after inflation) with a nickel and looked at all the candy bars, finally he came to Edd and laid the nickel on the counter and said it wouldn't buy anything. (Edd didn't say but I would not be surprised if he gave him the candy bar for a nickel). Another incident a little fellow came in to buy something his Mother requested, the store being very busy at the time he piped up and said “take this off my mind before I forget it”. Many neighbors that came in, Hopps, Milton Barnes, Doris Milliman, McCrystals, Kerbysons, LaRues, Moffitts and of course Zolkoskys have very fond memories of the Handy Store.

One of his famous customers that went on to greater things(I guess there are greater things outside of Ypsilanti) Phyliss Diller. She says “thanks to Edd's early tutelage when she knew nothing about cooking. She is now a great cook, it is a pleasure rather than a mystery.”

Phyliss stated on an interview to a newspaper “When she moved to Ypsilanti, Half a block away her salvation was a little old fashioned one man grocery owned by this wonderful man, Edd Dykman. Every morning I sent the ogre off to work and took my cookbook to the store. I didn't know a piece of meat from a glove. In fact, the night I served Braised Gove, Fang liked it better than the Peach Melba she made, dissolving in laughter”. They have many memories such as that

Who had a baby, Who lost their job, Who had company, Who's Son went into the Service, Who was happy or sad.

There was an incident one afternoon, Pat McCrystal came into the store for something and told Edd his Mother had hurt her back and had to go to the Doctor, but she couldn't go because she had no one to take care of the twins, about a year old. There was a lady in the store so she said to Pat, Lets go Pat, go and take care of them while she goes to the Doctors. So you see what a friendly store the Dykman's had.

We have taken a copy of the Dykman's Christmas card that Phyliss sent to them in January of 1998. Her picture also a gift to the Dykman's.

Laura had left for home one afternoon, taking the money out of the drawer, she put in a bag and put it on the counter. Well she forgot to pick it up. She had to drive to their home out on Packard, having to go home on Washtenaw and then drive through the muck and mire from Washtenaw to Packard, No pavement. It was a terrible day, Then a robber came into the store to rob Edd, but did not get the money. He shot Edd and Edd was in the hospital for 2 weeks.

Not long after that Edd sold the store, needless to say it did not last too long, it has been closed for several years. It is now a house.

To know The Dykmans is to love them. They have many stories to tell, interesting ones and Edd chuckles as he remembers some of his experiences. I know the children were favorites of his.

They have three children, Arthur, Cora May, (Corkey) Beth Marie (Buzz.). They can be very proud of their folks as they were an asset to our community. We can be very proud to know that we knew Edd and Laura Dykman.