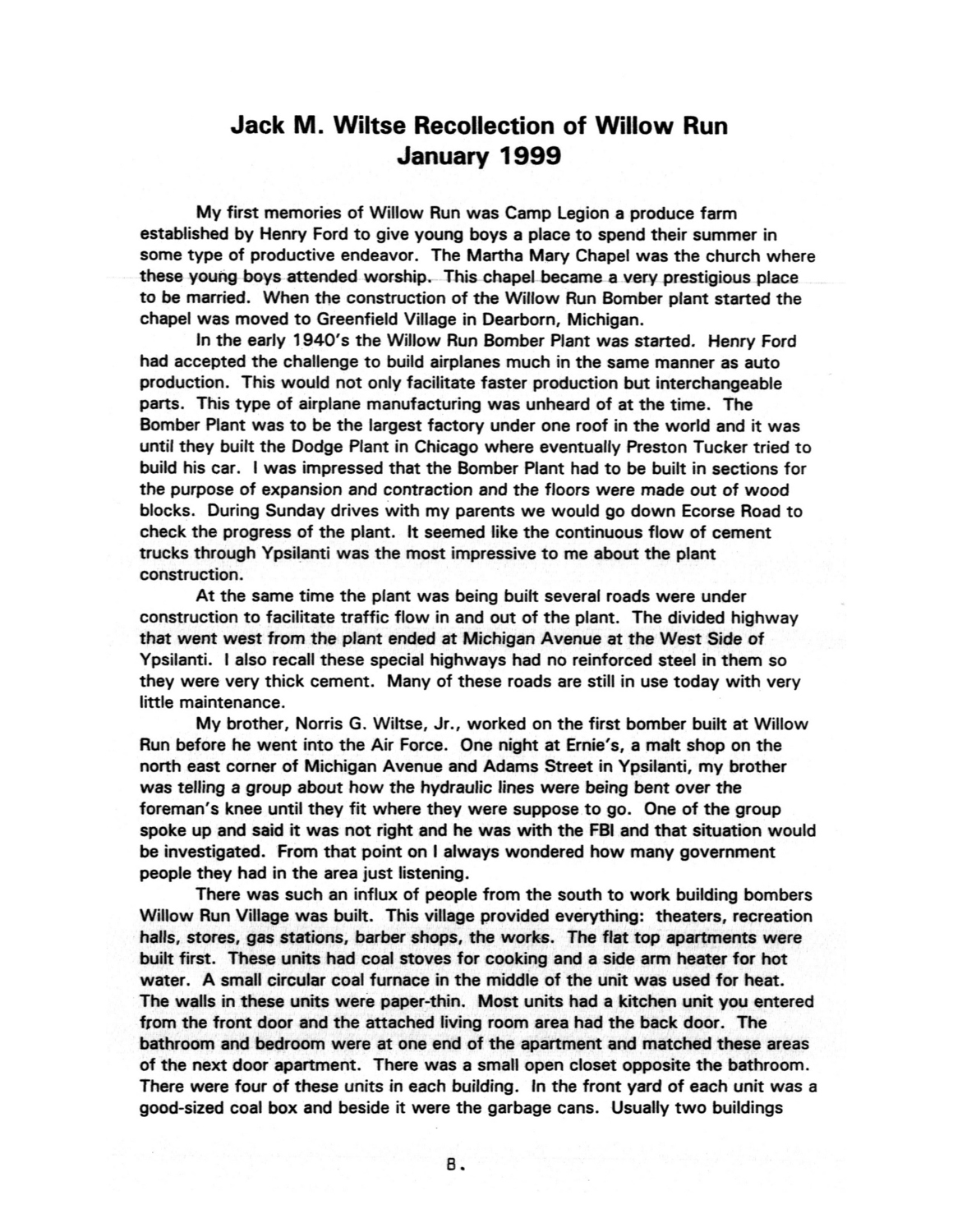 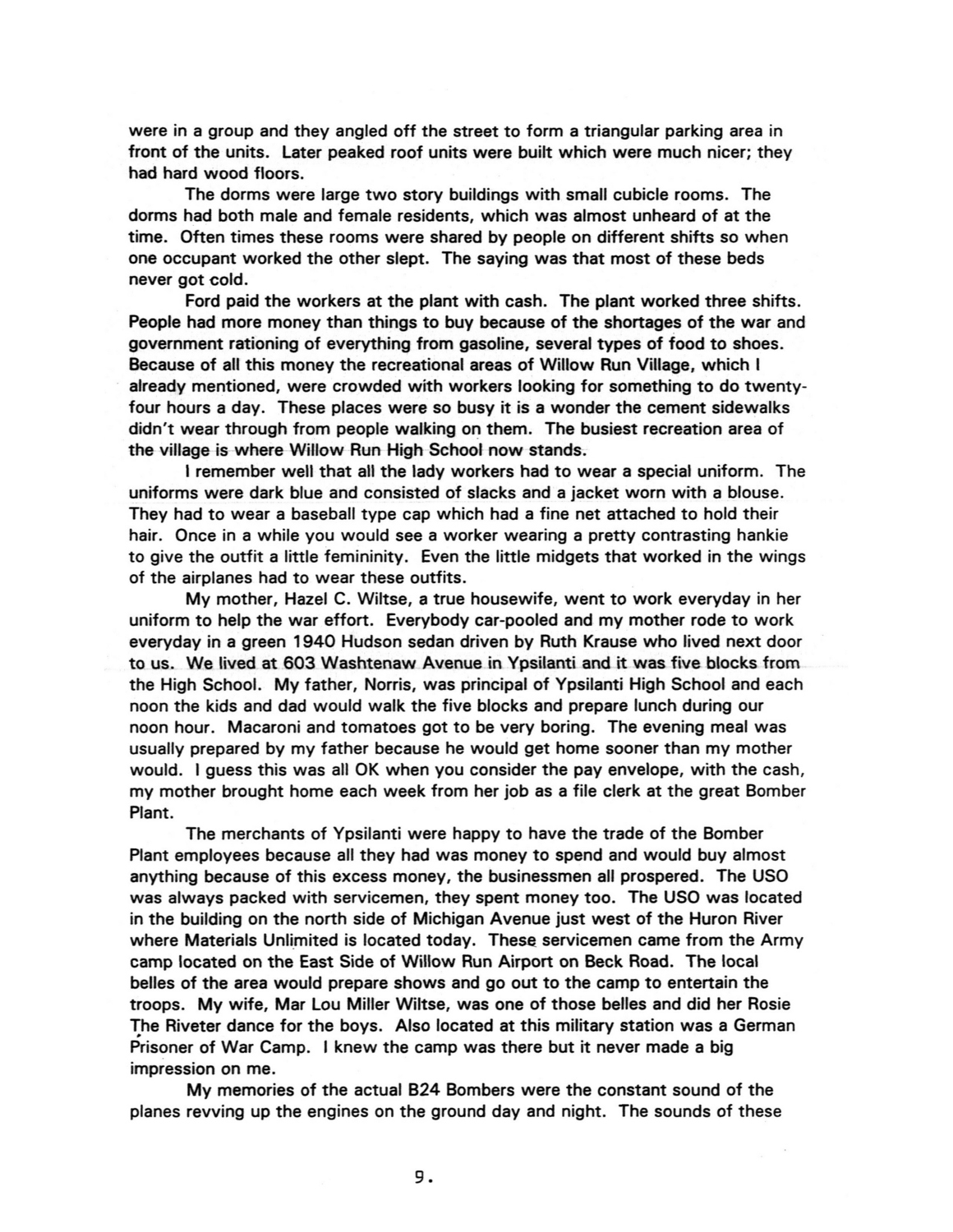 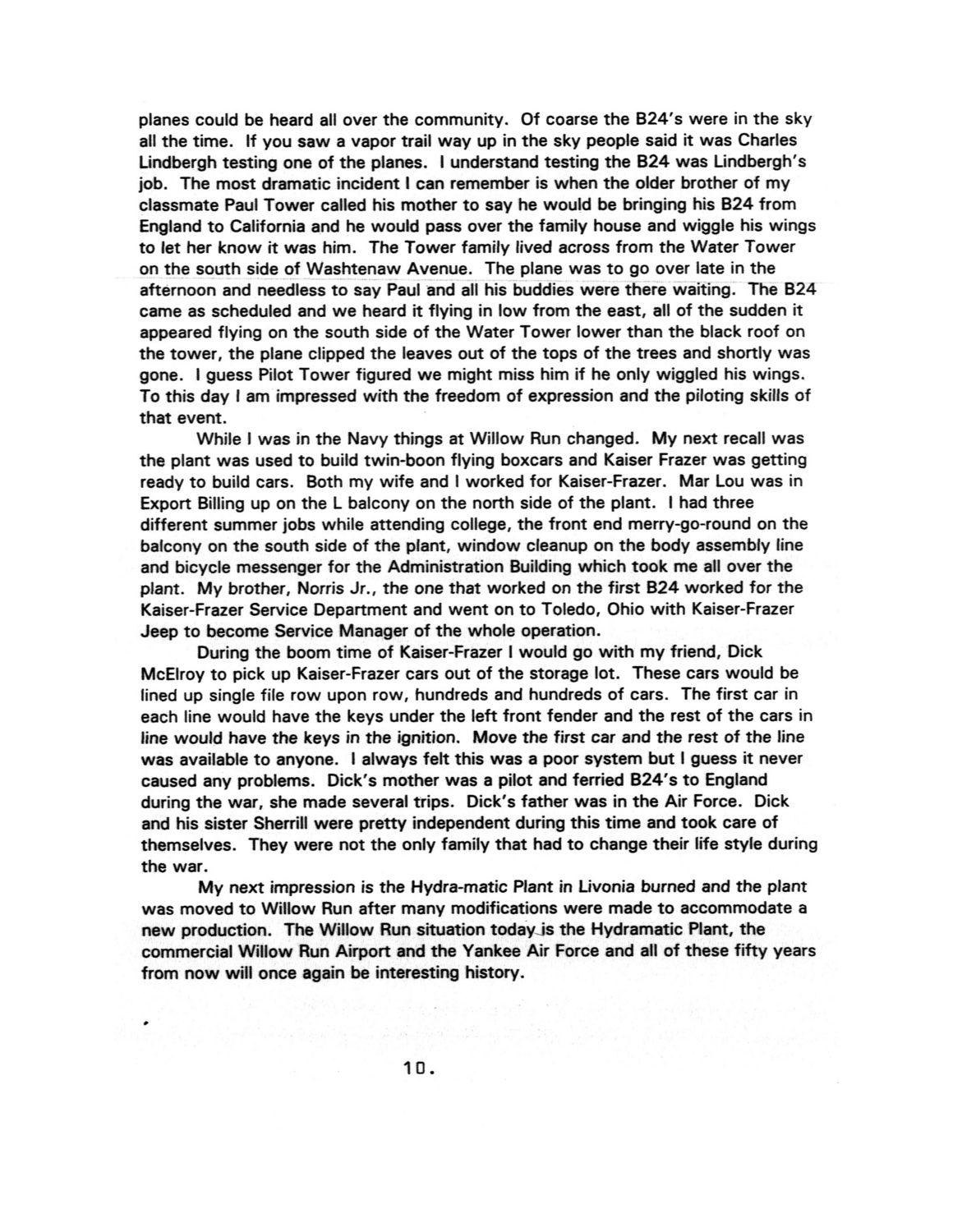 My first memories of Willow Run was Camp Legion a produce farm established by Henry Ford to give young boys a place to spend their summer in some type of productive endeavor. The Martha Mary Chapel was the church where these young boys attended worship. This chapel became a very prestigious place to be married. When the construction of the Willow Run Bomber plant started the chapel was moved to Greenfield Village in Dearborn, Michigan.

In the early 1940's the Willow Run Bomber Plant was started. Henry Ford had accepted the challenge to build airplanes much in the same manner as auto production. This would not only facilitate faster production but interchangeable parts. This type of airplane manufacturing was unheard of at the time. The Bomber Plant was to be the largest factory under one roof in the world and it was until they built the Dodge Plant in Chicago where eventually Preston Tucker tried to build his car. I was impressed that the Bomber Plant had to be built in sections for the purpose of expansion and contraction and the floors were made out of wood blocks. During Sunday drives with my parents we would go down Ecorse Road to check the progress of the plant. It seemed like the continuous flow of cement trucks through Ypsilanti was the most impressive to me about the plant construction.

At the same time the plant was being built several roads were under construction to facilitate traffic flow in and out of the plant. The divided highway that went west from the plant ended at Michigan Avenue at the West Side of Ypsilanti. I also recall these special highways had no reinforced steel in them so they were very thick cement. Many of these roads are still in use today with very little maintenance.

My brother, Norris G. Wiltse, Jr., worked on the first bomber built at Willow Run before he went into the Air Force. One night at Ernie's, a malt shop on the north east corner of Michigan Avenue and Adams Street in Ypsilanti, my brother was telling a group about how the hydraulic lines were being bent over the foreman's knee until they fit where they were suppose to go. One of the group spoke up and said it was not right and he was with the FBI and that situation would be investigated. From that point on I always wondered how many government people they had in the area just listening.

There was such an influx of people from the south to work building bombers Willow Run Village was built. This village provided everything: theaters, recreation halls, stores, gas stations, barber shops, the works. The flat top apartments were built first. These units had coal stoves for cooking and a side arm heater for hot water. A small circular coal furnace in the middle of the unit was used for heat. The walls in these units were paper-thin. Most units had a kitchen unit you entered from the front door and the attached living room area had the back door. The bathroom and bedroom were at one end of the apartment and matched these areas of the next door apartment. There was a small open closet opposite the bathroom. There were four of these units in each building. In the front yard of each unit was a good-sized coal box and beside it were the garbage cans. Usually two buildings were in a group and they angled off the street to form a triangular parking area in front of the units. Later peaked roof units were built which were much nicer; they had hard wood floors.

The dorms were large two story buildings with small cubicle rooms. The dorms had both male and female residents, which was almost unheard of at the time. Often times these rooms were shared by people on different shifts so when one occupant worked the other slept. The saying was that most of these beds never got cold.

Ford paid the workers at the plant with cash. The plant worked three shifts. People had more money than things to buy because of the shortages of the war and government rationing of everything from gasoline, several types of food to shoes. Because of all this money the recreational areas of Willow Run Village, which I already mentioned, were crowded with workers looking for something to do twenty-four hours a day. These places were so busy it is a wonder the cement sidewalks didn't wear through from people walking on them. The busiest recreation area of the village is where Willow Run High School now stands.

I remember well that all the lady workers had to wear a special uniform. The uniforms were dark blue and consisted of slacks and a jacket worn with a blouse. They had to wear a baseball type cap which had a fine net attached to hold their hair. Once in a while you would see a worker wearing a pretty contrasting hankie to give the outfit a little femininity. Even the little midgets that worked in the wings of the airplanes had to wear these outfits.

My mother, Hazel C. Wiltse, a true housewife, went to work everyday in her uniform to help the war effort. Everybody car-pooled and my mother rode to work everyday in a green 1940 Hudson sedan driven by Ruth Krause who lived next door to us. We lived at 603 Washtenaw Avenue in Ypsilanti and it was five blocks from the High School. My father, Norris, was principal of Ypsilanti High School and each noon the kids and dad would walk the five blocks and prepare lunch during our noon hour. Macaroni and tomatoes got to be very boring. The evening meal was usually prepared by my father because he would get home sooner than my mother would. I guess this was all OK when you consider the pay envelope, with the cash, my mother brought home each week from her job as a file clerk at the great Bomber Plant.

The merchants of Ypsilanti were happy to have the trade of the Bomber Plant employees because all they had was money to spend and would buy almost anything because of this excess money, the businessmen all prospered. The USO was always packed with servicemen, they spent money too. The USO was located in the building on the north side of Michigan Avenue just west of the Huron River where Materials Unlimited is located today. These servicemen came from the Army camp located on the East Side of Willow Run Airport on Beck Road. The local belles of the area would prepare shows and go out to the camp to entertain the troops. My wife, Mar Lou Miller Wiltse, was one of those belles and did her Rosie The Riveter dance for the boys. Also located at this military station was a German Prisoner of War Camp. I knew the camp was there but it never made a big impression on me.

My memories of the actual B24 Bombers were the constant sound of the planes revving up the engines on the ground day and night. The sounds of these planes could be heard all over the community. Of coarse the B24's were in the sky all the time. If you saw a vapor trail way up in the sky people said it was Charles Lindbergh testing one of the planes. I understand testing the B24 was Lindbergh's job. The most dramatic incident I can remember is when the older brother of my classmate Paul Tower called his mother to say he would be bringing his B24 from England to California and he would pass over the family house and wiggle his wings to let her know it was him. The Tower family lived across from the Water Tower on the south side of Washtenaw Avenue. The plane was to go over late in the afternoon and needless to say Paul and all his buddies were there waiting. The B24 came as scheduled and we heard it flying in low from the east, all of the sudden it appeared flying on the south side of the Water Tower lower than the black roof on the tower, the plane clipped the leaves out of the tops of the trees and shortly was gone. I guess Pilot Tower figured we might miss him if he only wiggled his wings. To this day I am impressed with the freedom of expression and the piloting skills of that event.

While I was in the Navy things at Willow Run changed. My next recall was the plant was used to build twin-boon flying boxcars and Kaiser Frazer was getting ready to build cars. Both my wife and I worked for Kaiser-Frazer. Mar Lou was in Export Billing up on the L balcony on the north side of the plant. I had three different summer jobs while attending college, the front end merry-go-round on the balcony on the south side of the plant, window cleanup on the body assembly line and bicycle messenger for the Administration Building which took me all over the plant. My brother, Norris Jr., the one that worked on the first B24 worked for the Kaiser-Frazer Service Department and went on to Toledo, Ohio with Kaiser-Frazer Jeep to become Service Manager of the whole operation.

During the boom time of Kaiser-Frazer I would go with my friend, Dick McElroy to pick up Kaiser-Frazer cars out of the storage lot. These cars would be lined up single file row upon row, hundreds and hundreds of cars. The first car in each line would have the keys under the left front fender and the rest of the cars in line would have the keys in the ignition. Move the first car and the rest of the line was available to anyone. I always felt this was a poor system but I guess it never caused any problems. Dick's mother was a pilot and ferried B24's to England during the war, she made several trips. Dick's father was in the Air Force. Dick and his sister Sherrill were pretty independent during this time and took care of themselves. They were not the only family that had to change their life style during the war.

My next impression is the Hydra-matic Plant in Livonia burned and the plant was moved to Willow Run after many modifications were made to accommodate a new production. The Willow Run situation today is the Hydramatic Plant, the commercial Willow Run Airport and the Yankee Air Force and all of these fifty years from now will once again be interesting history.