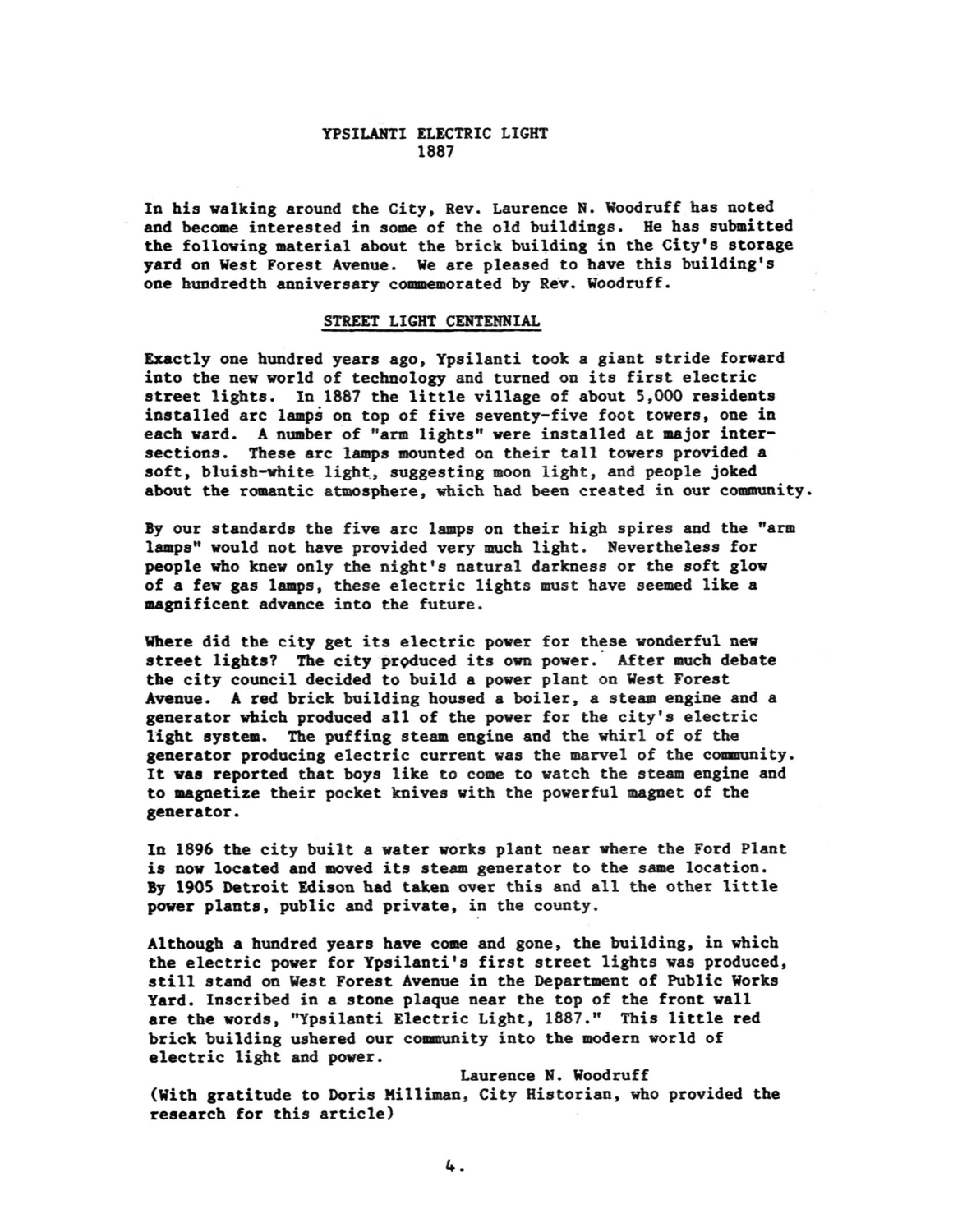 In his walking around the City, Rev. Laurence N. Woodruff has noted and become interested in some of the old buildings. He has submitted the following material about the brick building in the City's storage yard on West Forest Avenue. We are pleased to have this building's one hundredth anniversary commemorated by Rev. Woodruff.

Exactly one hundred years ago, Ypsilanti took a giant stride forward into the new world of technology and turned on its first electric street lights. In 1887 the little village of about 5,000 residents installed are lamps on top of five seventy-five foot towers, one in each ward. A number of “arm lights” were installed at major inter-sections. These are lamps mounted on their tall towers provided a soft, bluish-white light, suggesting moon light, and people joked about the romantic atmosphere, which had been created in our community.

By our standards the five arc lamps on their high spires and the “arm lamps” would not have provided very much light. Nevertheless for people who knew only the night's natural darkness or the soft glow of a few gas lamps, these electric lights must have seemed like a magnificent advance into the future.

Where did the city get its electric power for these wonderful new street lights? The city produced its own power. After much debate the city council decided to build a power plant on West Forest Avenue. A red brick building housed a boiler, a steam engine and a generator which produced all of the power for the city's electric light system. The puffing steam engine and the whirl of of the generator producing electric current was the marvel of the community. It was reported that boys like to come to watch the steam engine and to magnetize their pocket knives with the powerful magnet of the generator.

In 1896 the city built a water works plant near where the Ford Plant is now located and moved its steam generator to the same location. By 1905 Detroit Edison had taken over this and all the other little power plants, public and private, in the county.

Although a hundred years have come and gone, the building, in which the electric power for Ypsilanti's first street lights was produced, still stand on West Forest Avenue in the Department of Public Works Yard. Inscribed in a stone plaque near the top of the front wall are the words, “Ypsilanti Electric Light, 1887.” This little red brick building ushered our community into the modern world of electric light and power.

(With gratitude to Doris Milliman, City Historian, who provided the research for this article)