The House at 220 North Huron Street 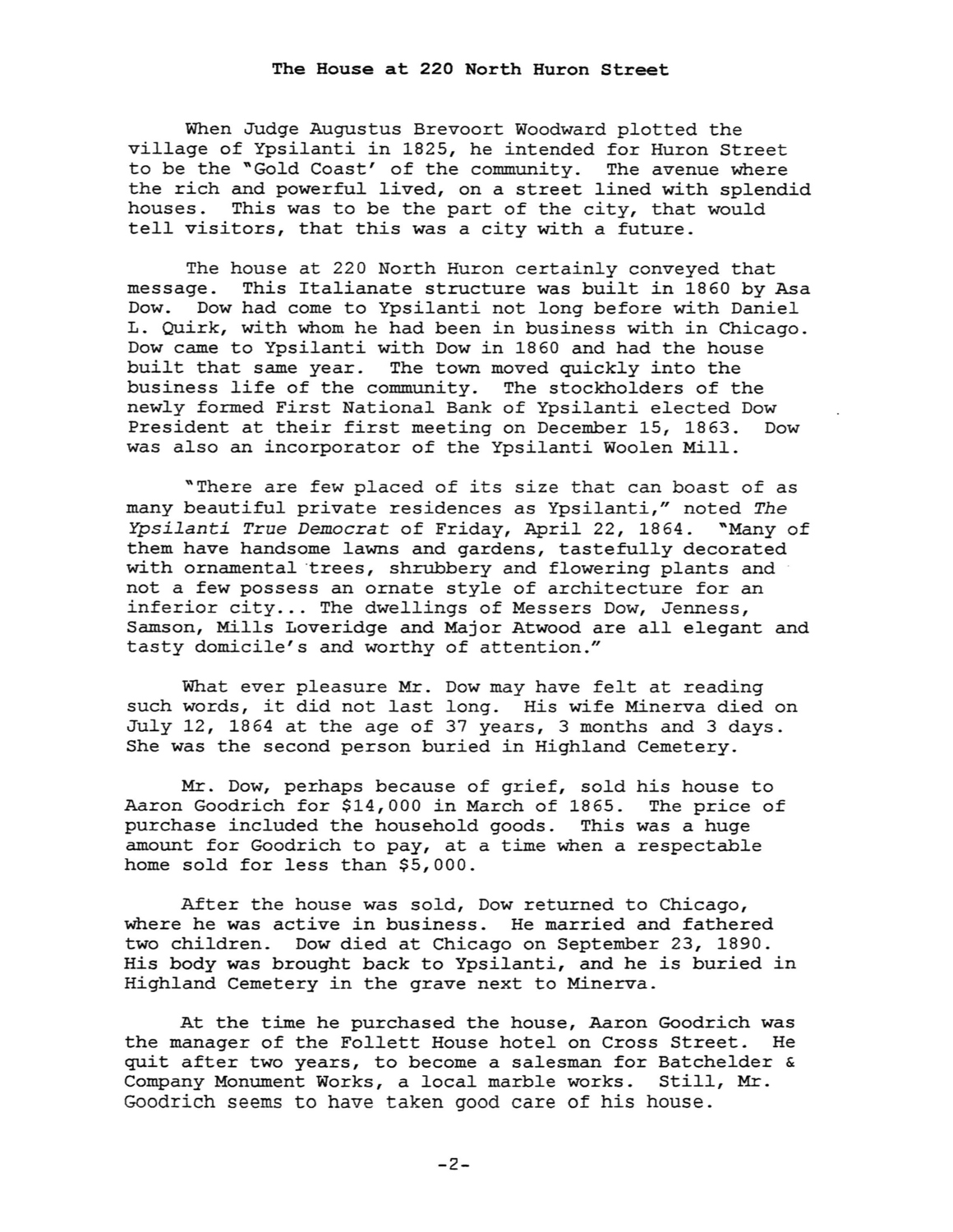 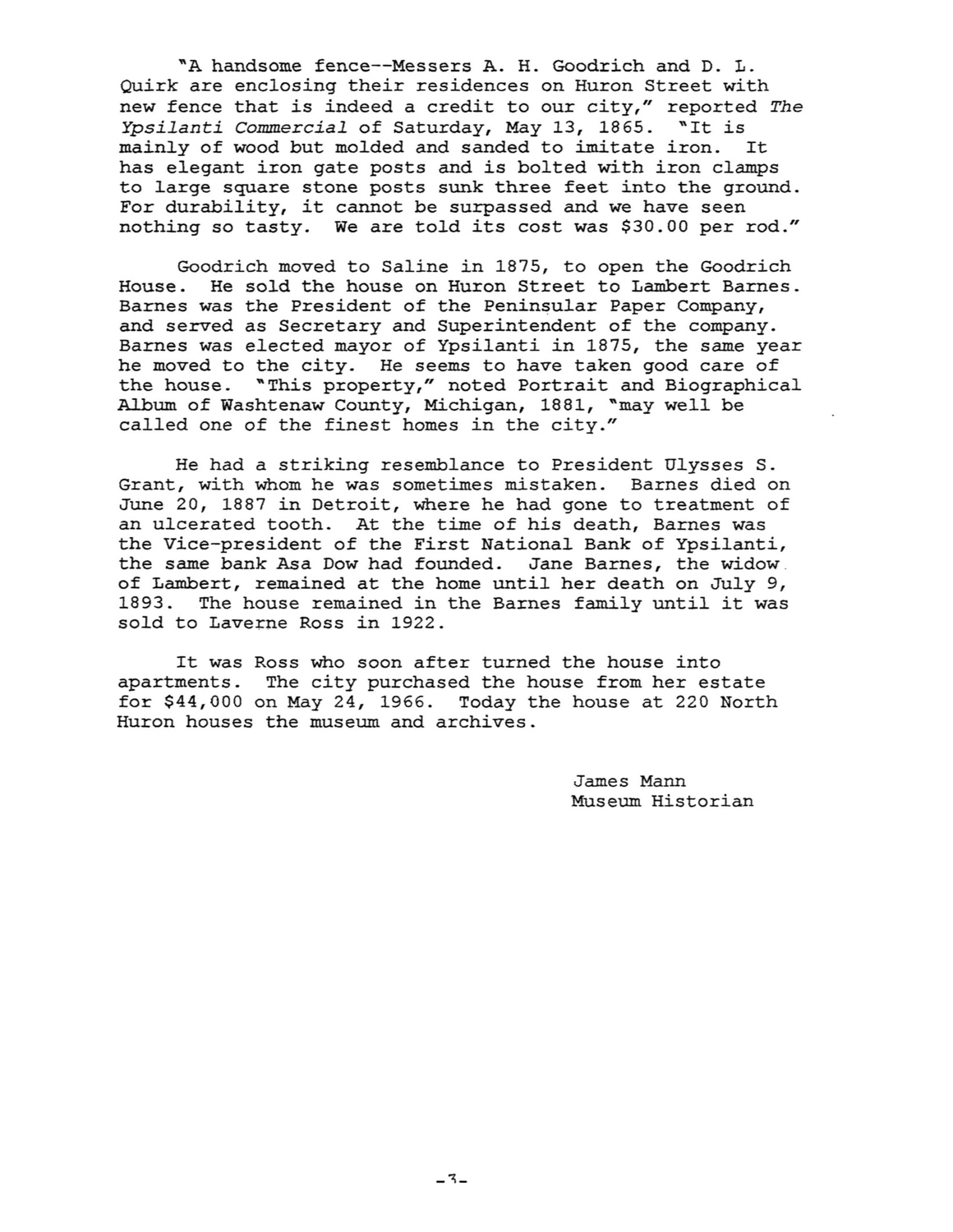 When Judge Augustus Brevoort Woodward plotted the village of Ypsilanti in 1825, he intended for Huron Street to be the ‘Gold Coast’ of the community. The avenue where the rich and powerful lived, on a street lined with splendid houses. This was to be the part of the city, that would tell visitors, that this was a city with a future.

The house at 220 North Huron certainly conveyed that message. This Italianate structure was built in 1860 by Asa Dow. Dow had come to Ypsilanti not long before with Daniel L. Quirk, with whom he had been in business with in Chicago. Dow came to Ypsilanti with Dow in 1860 and had the house built that same year. The town moved quickly into the business life of the community. The stockholders of the newly formed First National Bank of Ypsilanti elected Dow President at their first meeting on December 15, 1863. Dow was also an incorporator of the Ypsilanti Woolen Mill.

“There are few placed of its size that can boast of as many beautiful private residences as Ypsilanti,” noted The Ypsilanti True Democrat of Friday, April 22, 1864. “Many of them have handsome lawns and gardens, tastefully decorated with ornamental trees, shrubbery and flowering plants and not a few possess an ornate style of architecture for an inferior city… The dwellings of Messers Dow, Jenness, Samson, Mills Loveridge and Major Atwood are all elegant and tasty domicile's and worthy of attention.”

What ever pleasure Mr. Dow may have felt at reading such words, it did not last long. His wife Minerva died on July 12, 1864 at the age of 37 years, 3 months and 3 days. She was the second person buried in Highland Cemetery.

Mr. Dow, perhaps because of grief, sold his house to Aaron Goodrich for $14,000 in March of 1865. The price of purchase included the household goods. This was a huge amount for Goodrich to pay, at a time when a respectable home sold for less than $5,000.

After the house was sold, Dow returned to Chicago, where he was active in business. He married and fathered two children. Dow died at Chicago on September 23, 1890. His body was brought back to Ypsilanti, and he is buried in Highland Cemetery in the grave next to Minerva.

At the time he purchased the house, Aaron Goodrich was the manager of the Follett House hotel on Cross Street. He quit after two years, to become a salesman for Batchelder & Company Monument Works, a local marble works. Still, Mr. Goodrich seems to have taken good care of his house.

“A handsome fence—Messers A. H. Goodrich and D. L. Quirk are enclosing their residences on Huron Street with new fence that is indeed a credit to our city,” reported The Ypsilanti Commercial of Saturday, May 13, 1865. “It is mainly of wood but molded and sanded to imitate iron. It has elegant iron gate posts and is bolted with iron clamps to large square stone posts sunk three feet into the ground. For durability, it cannot be surpassed and we have seen nothing so tasty. We are told its cost was $30.00 per rod.”

Goodrich moved to Saline in 1875, to open the Goodrich House. He sold the house on Huron Street to Lambert Barnes. Barnes was the President of the Peninsular Paper Company, and served as Secretary and Superintendent of the company. Barnes was elected mayor of Ypsilanti in 1875, the same year he moved to the city. He seems to have taken good care of the house. “This property,” noted Portrait and Biographical Album of Washtenaw County, Michigan, 1881, “may well be called one of the finest homes in the city.”

He had a striking resemblance to President Ulysses S. Grant, with whom he was sometimes mistaken. Barnes died on June 20, 1887 in Detroit, where he had gone to treatment of an ulcerated tooth. At the time of his death, Barnes was the Vice-president of the First National Bank of Ypsilanti, the same bank As a Dow had founded. Jane Barnes, the widow of Lambert, remained at the home until her death on July 9, 1893. The house remained in the Barnes family until it was sold to Laverne Ross in 1922.

It was Ross who soon after turned the house into apartments. The city purchased the house from her estate for $44,000 on May 24, 1966. Today the house at 220 North Huron houses the museum and archives.