Memories of the Kitchen Stove 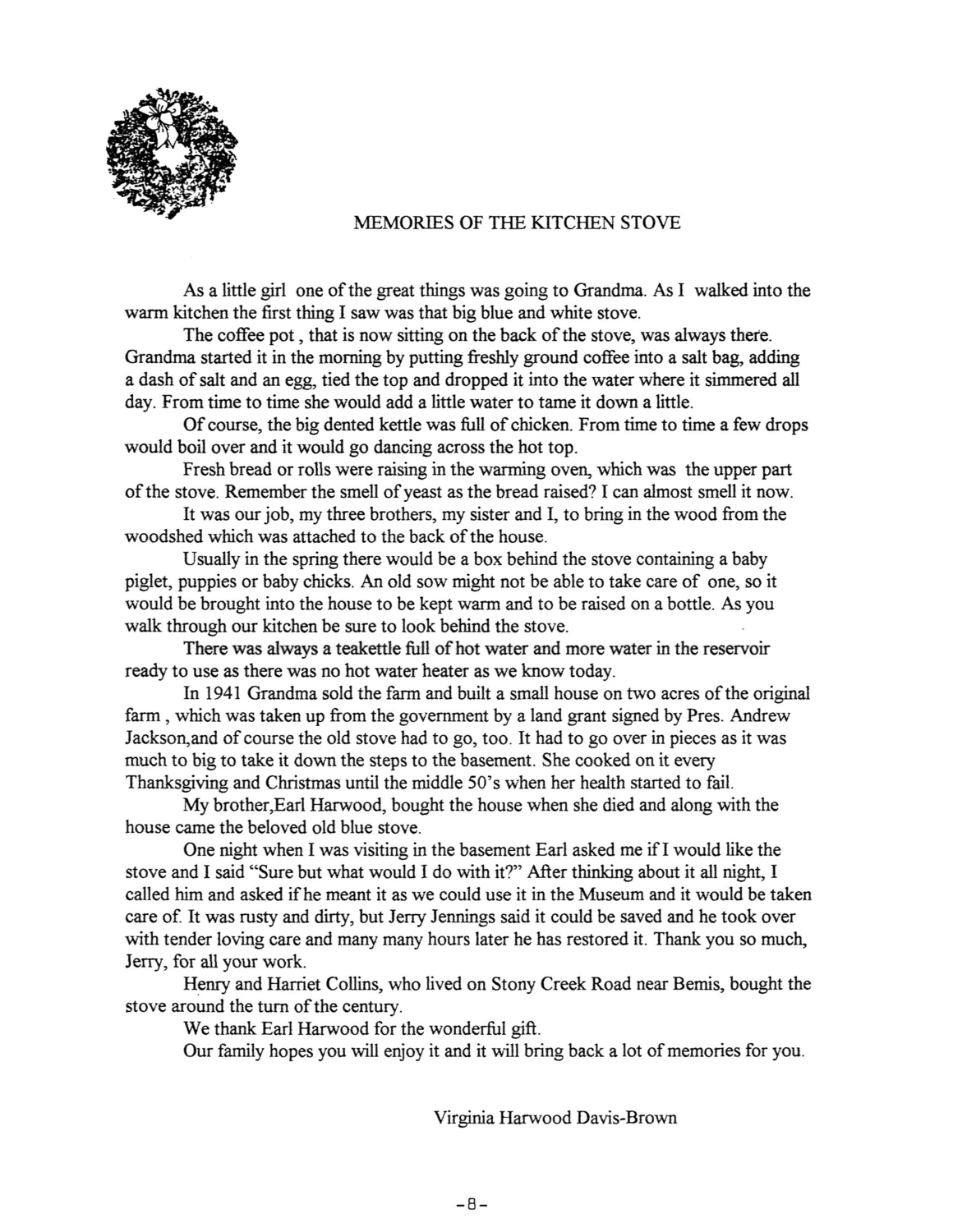 As a little girl one of the great things was going to Grandma. As I walked into the warm kitchen the first thing I saw was that big blue and white stove.

The coffee pot, that is now sitting on the back of the stove, was always there. Grandma started it in the morning by putting freshly ground coffee into a salt bag, adding a dash of salt and an egg, tied the top and dropped it into the water where it simmered all day. From time to time she would add a little water to tame it down a little.

Of course, the big dented kettle was full of chicken. From time to time a few drops would boil over and it would go dancing across the hot top.

Fresh bread or rolls were raising in the warming oven, which was the upper part of the stove. Remember the smell of yeast as the bread raised? I can almost smell it now.

It was our job, my three brothers, my sister and I, to bring in the wood from the woodshed which was attached to the back of the house.

Usually in the spring there would be a box behind the stove containing a baby piglet, puppies or baby chicks. An old sow might not be able to take care of one, so it would be brought into the house to be kept warm and to be raised on a bottle. As you walk through our kitchen be sure to look behind the stove.

There was always a teakettle full of hot water and more water in the reservoir ready to use as there was no hot water heater as we know today.

In 1941 Grandma sold the farm and built a small house on two acres of the original farm, which was taken up from the government by a land grant signed by Pres. Andrew Jackson, and of course the old stove had to go, too. It had to go over in pieces as it was much to big to take it down the steps to the basement. She cooked on it every Thanksgiving and Christmas until the middle 50's when her health started to fail.

My brother, Earl Harwood, bought the house when she died and along with the house came the beloved old blue stove.

One night when I was visiting in the basement Earl asked me if I would like the stove and I said “Sure but what would I do with it?” After thinking about it all night, I called him and asked if he meant it as we could use it in the Museum and it would be taken care of. It was rusty and dirty, but Jerry Jennings said it could be saved and he took over with tender loving care and many many hours later he has restored it. Thank you so much, Jerry, for all your work.

Henry and Harriet Collins, who lived on Stony Creek Road near Bemis, bought the stove around the turn of the century.

We thank Earl Harwood for the wonderful gift.

Our family hopes you will enjoy it and it will bring back a lot of memories for you.