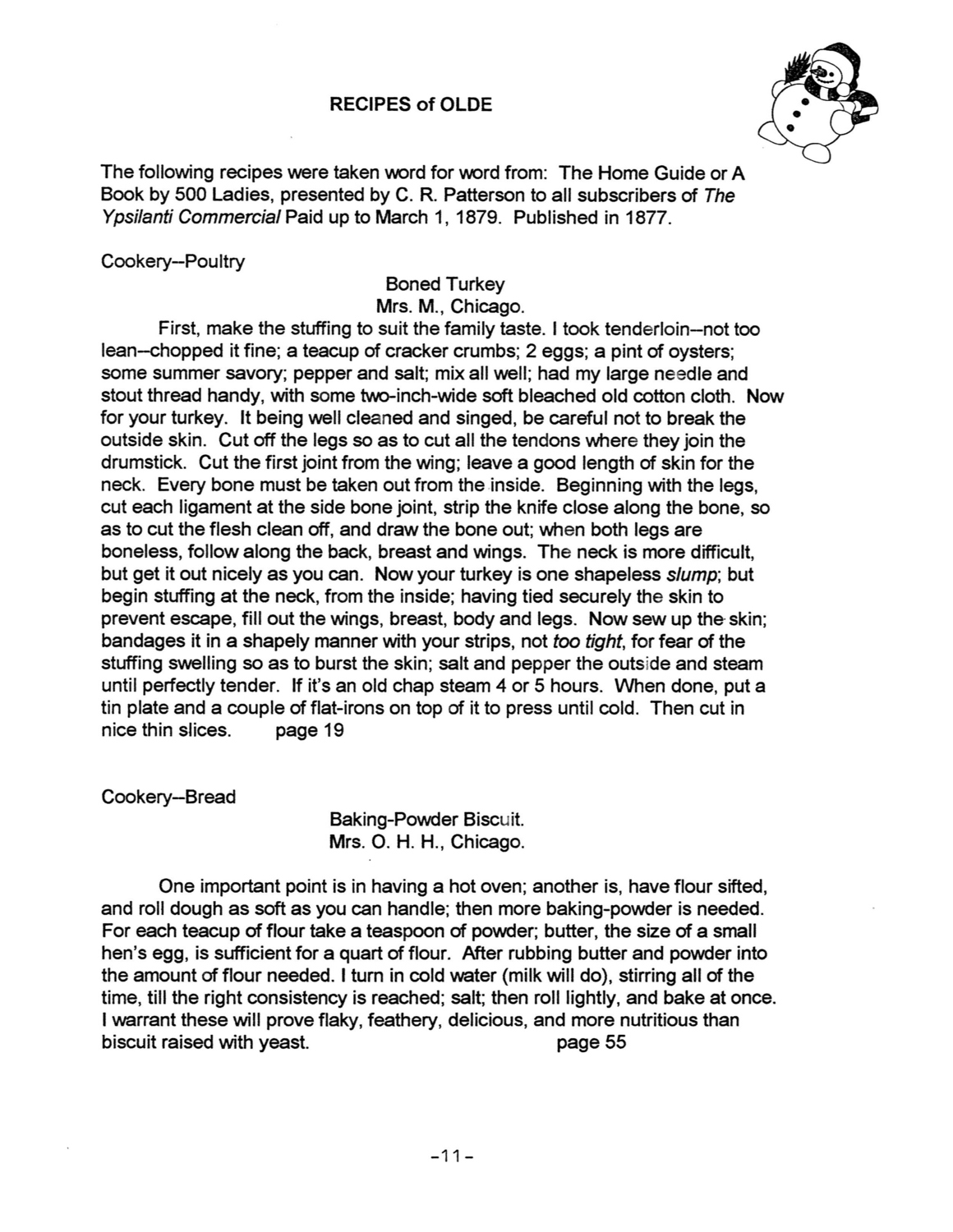 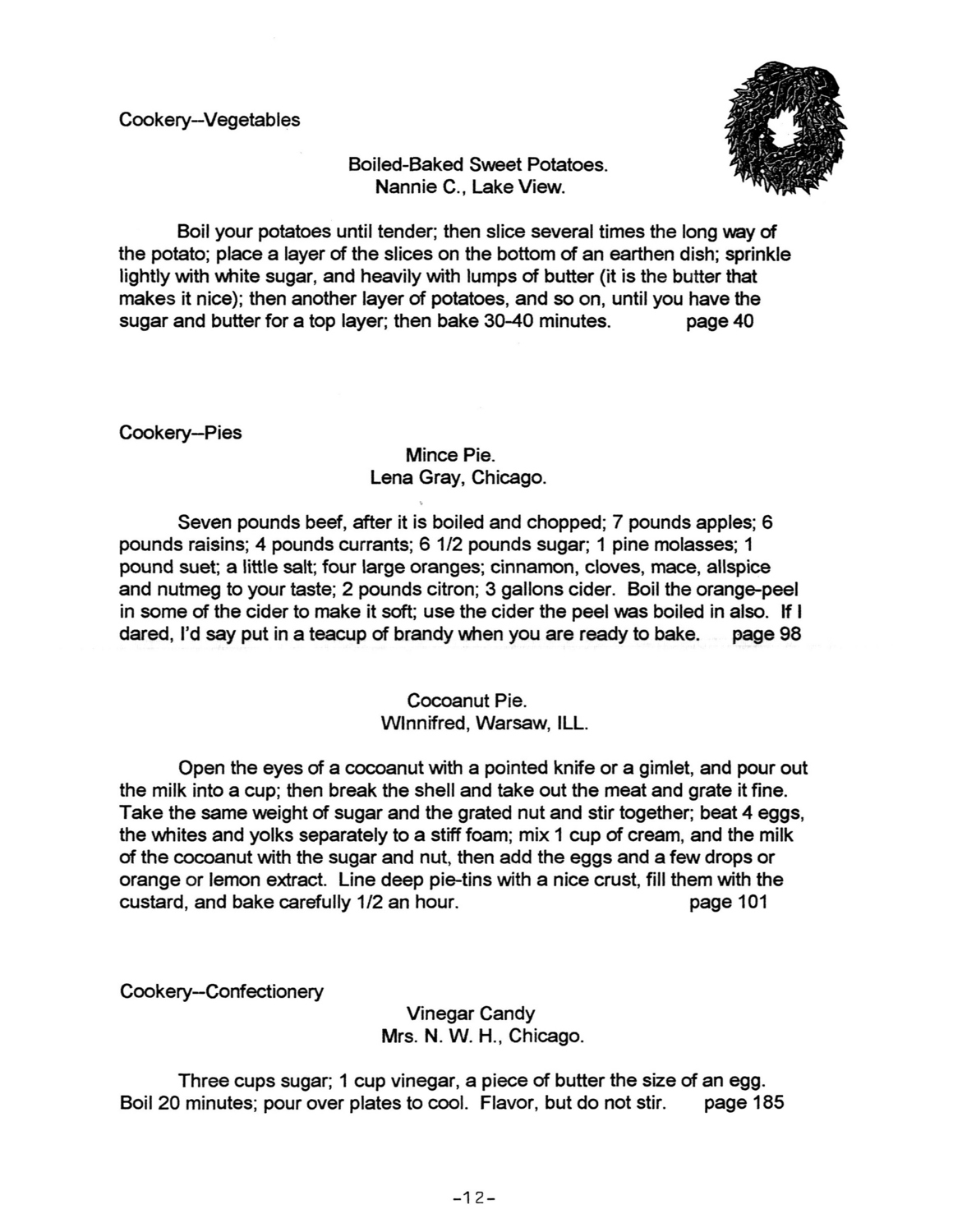 The following recipes were taken word for word from: The Home Guide or A Book by 500 Ladies, presented by C. R. Patterson to all subscribers of The Ypsilanti Commercial Paid up to March 1, 1879. Published in 1877.

First, make the stuffing to suit the family taste. I took tenderloin–not too lean–chopped it fine; a teacup of cracker crumbs; 2 eggs; a pint of oysters; some summer savory; pepper and salt; mix all well; had my large needle and stout thread handy, with some two-inch-wide soft bleached old cotton cloth. Now for your turkey. It being well cleaned and singed, be careful not to break the outside skin. Cut off the legs so as to cut all the tendons where they join the drumstick. Cut the first joint from the wing; leave a good length of skin for the neck. Every bone must be taken out from the inside. Beginning with the legs, cut each ligament at the side bone joint, strip the knife close along the bone, so as to cut the flesh clean off, and draw the bone out; when both legs are boneless, follow along the back, breast and wings. The neck is more difficult, but get it out nicely as you can. Now your turkey is one shapeless slump; but begin stuffing at the neck, from the inside; having tied securely the skin to prevent escape, fill out the wings, breast, body and legs. Now sew up the skin; bandages it in a shapely manner with your strips, not too tight, for fear of the stuffing swelling so as to burst the skin; salt and pepper the outside and steam until perfectly tender. If it's an old chap steam 4 or 5 hours. When done, put a tin plate and a couple of flat-irons on top of it to press until cold. Then cut in nice thin slices.

One important point is in having a hot oven; another is, have flour sifted, and roll dough as soft as you can handle; then more baking-powder is needed. For each teacup of flour take a teaspoon of powder; butter, the size of a small hen's egg, is sufficient for a quart of flour. After rubbing butter and powder into the amount of flour needed. I turn in cold water (milk will do), stirring all of the time, till the right consistency is reached; salt; then roll lightly, and bake at once. I warrant these will prove flaky, feathery, delicious, and more nutritious than biscuit raised with yeast.

Boil your potatoes until tender; then slice several times the long way of the potato; place a layer of the slices on the bottom of an earthen dish; sprinkle lightly with white sugar, and heavily with lumps of butter (it is the butter that makes it nice); then another layer of potatoes, and so on, until you have the sugar and butter for a top layer; then bake 30-40 minutes.

Seven pounds beef, after it is boiled and chopped; 7 pounds apples; 6 pounds raisins; 4 pounds currants; 6 1/2 pounds sugar; 1 pine molasses; 1 pound suet; a little salt; four large oranges; cinnamon, cloves, mace, allspice and nutmeg to your taste; 2 pounds citron; 3 gallons cider. Boil the orange-peel in some of the cider to make it soft; use the cider the peel was boiled in also. If I dared, I'd say put in a teacup of brandy when you are ready to bake.

Open the eyes of a cocoanut with a pointed knife or a gimlet, and pour out the milk into a cup; then break the shell and take out the meat and grate it fine. Take the same weight of sugar and the grated nut and stir together; beat 4 eggs, the whites and yolks separately to a stiff foam; mix 1 cup of cream, and the milk of the cocoanut with the sugar and nut, then add the eggs and a few drops or orange or lemon extract. Line deep pie-tins with a nice crust, fill them with the custard, and bake carefully 1/2 an hour.

Three cups sugar; 1 cup vinegar, a piece of butter the size of an egg. Boil 20 minutes; pour over plates to cool. Flavor, but do not stir.