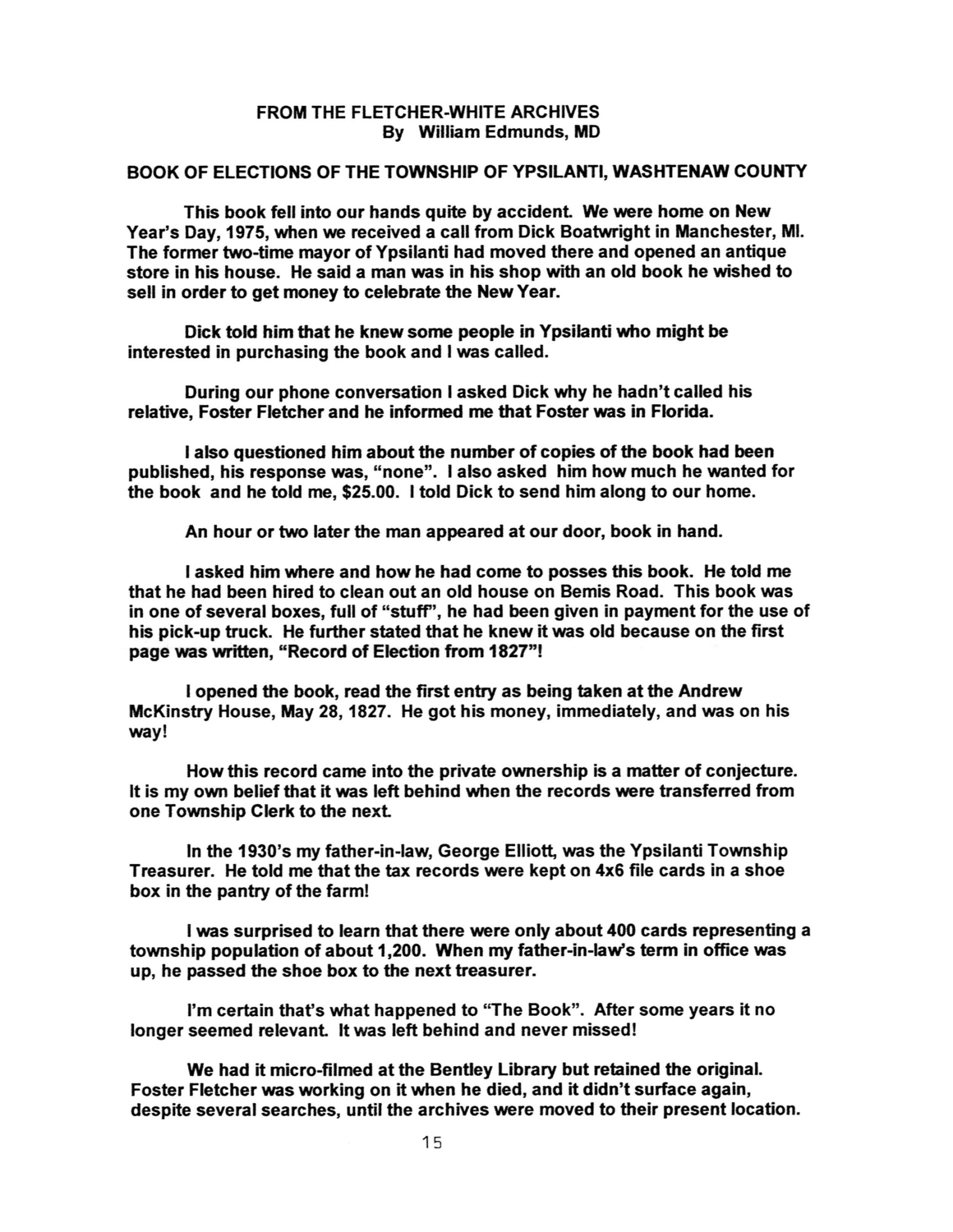 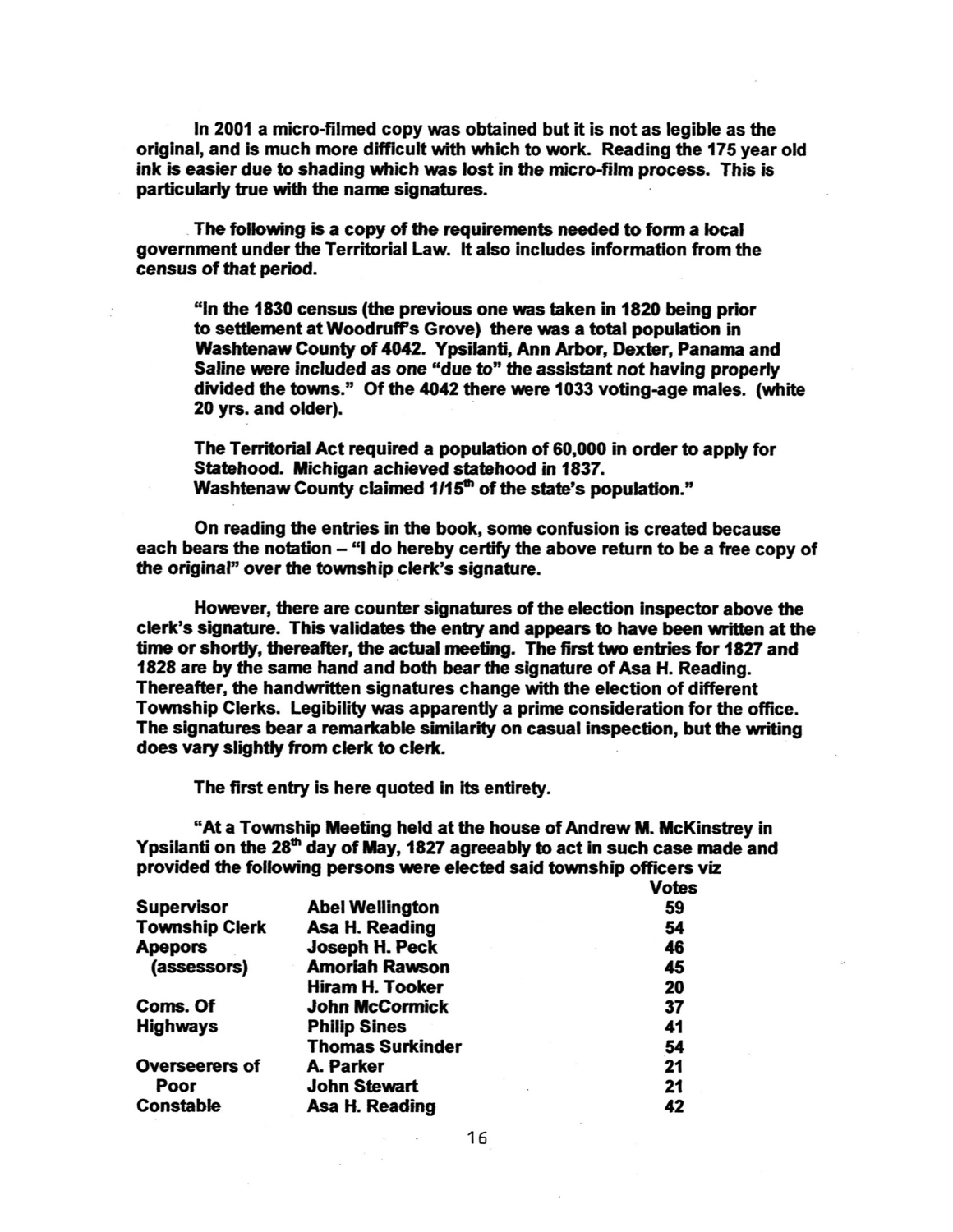 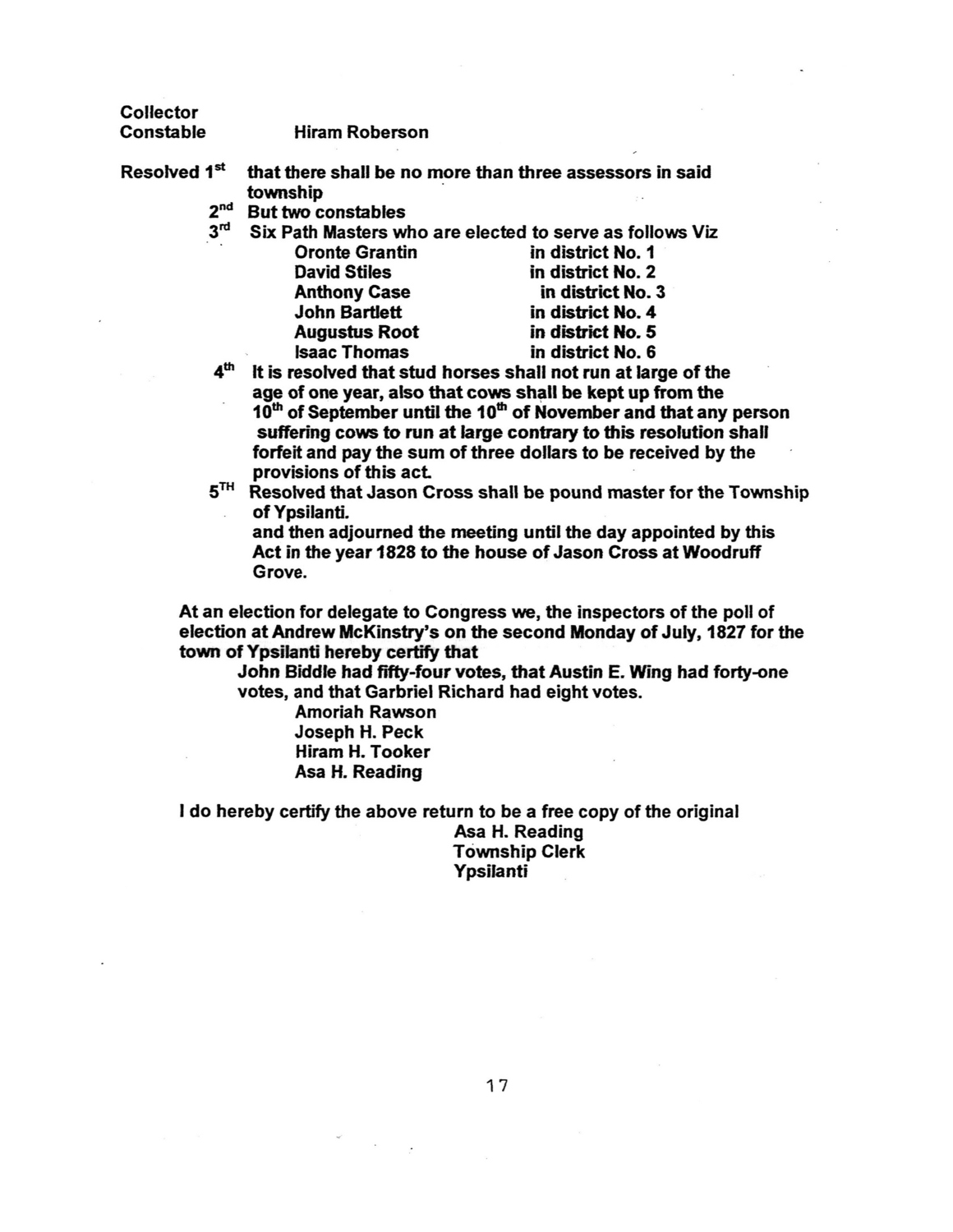 FROM THE FLETCHER-WHITE ARCHIVES
By William Edmunds, MD

BOOK OF ELECTIONS OF THE TOWNSHIP OF YPSILANTI, WASHTENAW COUNTY

This book fell into our hands quite by accident. We were home on New Year's Day, 1975, when we received a call from Dick Boatwright in Manchester, MI. The former two-time mayor of Ypsilanti had moved there and opened an antique store in his house. He said a man was in his shop with an old book he wished to sell in order to get money to celebrate the New Year.

Dick told him that he knew some people in Ypsilanti who might be interested in purchasing the book and I was called.

During our phone conversation I asked Dick why he hadn't called his relative, Foster Fletcher and he informed me that Foster was in Florida.

I also questioned him about the number of copies of the book had been published, his response was, “none”. I also asked him how much he wanted for the book and he told me, &dollar;25.00. I told Dick to send him along to our home.

An hour or two later the man appeared at our door, book in hand.

I asked him where and how he had come to posses this book. He told me that he had been hired to clean out an old house on Bemis Road. This book was in one of several boxes, full of “stuff”, he had been given in payment for the use of his pick-up truck. He further stated that he knew it was old because on the first page was written, “Record of Election from 1827”!

I opened the book, read the first entry as being taken at the Andrew McKinstry House, May 28, 1827. He got his money, immediately, and was on his way!

How this record came into the private ownership is a matter of conjecture. It is my own belief that it was left behind when the records were transferred from one Township Clerk to the next.

In the 1930's my father-in-law, George Elliott, was the Ypsilanti Township Treasurer. He told me that the tax records were kept on 4×6 file cards in a shoe box in the pantry of the farm!

I was surprised to learn that there were only about 400 cards representing a township population of about 1,200. When my father-in-law's term in office was up, he passed the shoe box to the next treasurer.

I'm certain that's what happened to “The Book”. After some years it no longer seemed relevant. It was left behind and never missed!

We had it micro-filmed at the Bentley Library but retained the original. Foster Fletcher was working on it when he died, and it didn't surface again, despite several searches, until the archives were moved to their present location.

In 2001 a micro-filmed copy was obtained but it is not as legible as the original, and is much more difficult with which to work. Reading the 175 year old ink is easier due to shading which was lost in the micro-film process. This is particularly true with the name signatures.

The following is a copy of the requirements needed to form a local government under the Territorial Law. It also includes information from the census of that period.

“In the 1830 census (the previous one was taken in 1820 being prior to settlement at Woodruff's Grove) there was a total population in Washtenaw County of 4042. Ypsilanti, Ann Arbor, Dexter, Panama and Saline were included as one “due to” the assistant not having properly divided the towns.” Of the 4042 there were 1033 voting-age males. (white 20 yrs. and older).

The Territorial Act required a population of 60,000 in order to apply for Statehood. Michigan achieved statehood in 1837.

On reading the entries in the book, some confusion is created because each bears the notation-“I do hereby certify the above return to be a free copy of the original” over the township clerk's signature.

However, there are counter signatures of the election inspector above the clerk's signature. This validates the entry and appears to have been written at the time or shortly, thereafter, the actual meeting. The first two entries for 1827 and 1828 are by the same hand and both bear the signature of Asa H. Reading. Thereafter, the handwritten signatures change with the election of different Township Clerks. Legibility was apparently a prime consideration for the office. The signatures bear a remarkable similarity on casual inspection, but the writing does vary slightly from clerk to clerk.

The first entry is here quoted in its entirety.

“At a Township Meeting held at the house of Andrew M. McKinstrey in Ypsilanti on the 28th day of May, 1827 agreeably to act in such case made and provided the following persons were elected said township officers viz

and then adjourned the meeting until the day appointed by this Act in the year 1828 to the house of Jason Cross at Woodruff Grove.

At an election for delegate to Congress we, the inspectors of the poll of election at Andrew McKinstry's on the second Monday of July, 1827 for the town of Ypsilanti hereby certify that

John Biddle had fifty-four votes, that Austin E. Wing had forty-one votes, and that Garbriel Richard had eight votes.