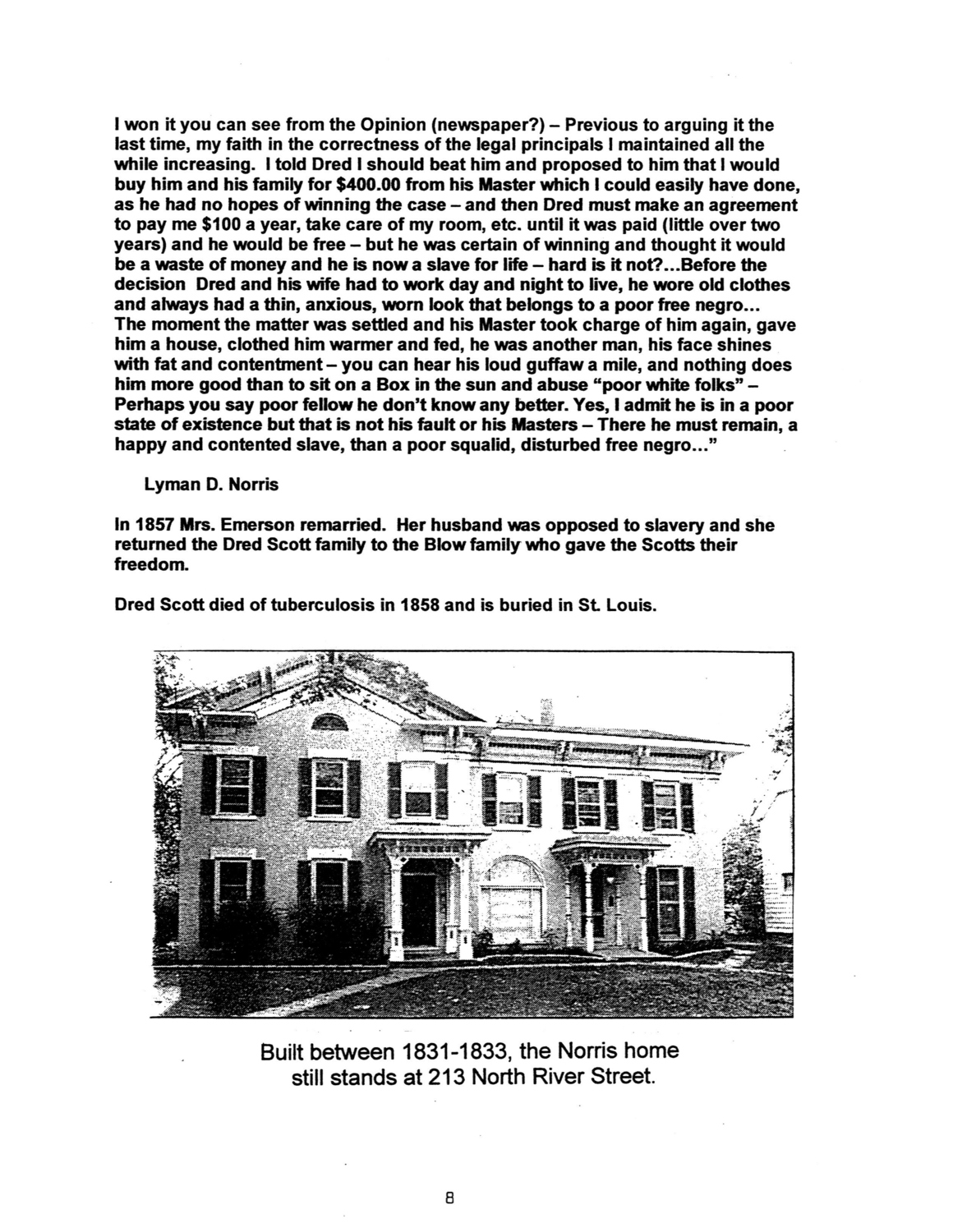 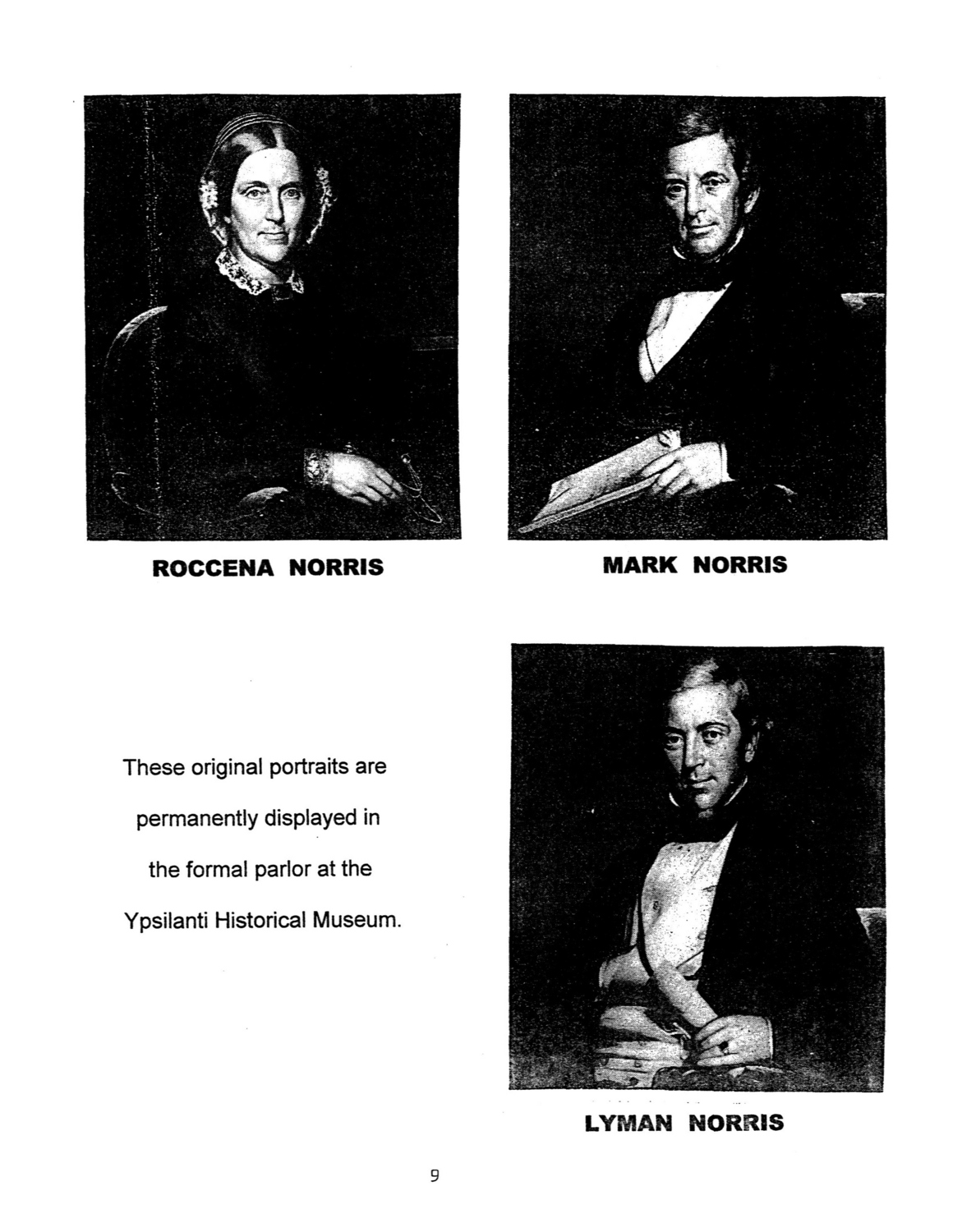 Dred Scott's greatest dream was to be a free man. He was born in Virginia in 1799 as a slave of the Peter Blow family and he remained a slave for most of the rest of his life.

The Blow family moved to St. Louis where Scott was sold to Dr. John Emerson, a military surgeon.

Scott accompanied Dr. Emerson to posts in the Illinois and the Wisconsin Territories where slavery was prohibited. While posted in the north with Dr. Emerson, Scott met and married Harriet Robinson, a free negro, and together they had two children.

In 1842 the Scott family and Dr. and Mrs. Emerson returned to St. Louis. Dr. Emerson died in 1843 and Mrs. Emerson hired out Dred, Harriet and their children to work for other families in St Louis. The Scotts did not like this arrangement.

Dred and his wife sued Mrs. Emerson for their freedom in the Circuit Court in 1846 and the Court ruled in favor of Mrs. Emerson but allowed the Scotts to refile their suit and the Scotts continued their case.

In 1850 the jury decided that the Scotts deserved to be free. This decision was based on their years of residence in the non-slave territories of Illinois and Wisconsin.

Once again, in 1852, the State Supreme Court overruled the Circuit Court and the Scotts returned to slavery. Dred Scott continued to fight for his freedom for the next four years, hiring attorneys as he could afford them.

The case had lingered on and on and the defense lawyers, many of whom worked little and made Scott pay dearly, finally passed the case over to a young lawyer from Ypsilanti.

Lyman Norris, son of Mark and Roccena Norris, became the Scott Family's lawyer for a fifty cent retainer fee, and an agreement that if a positive decision was achieved, a reward of $400.00 would be forthcoming to Norris.

In a letter that Lyman wrote from St. Louis to his mother in Ypsilanti, on March 31st, 1852 he says: (The following is a part of his letter, in his own written words, and may be a bit difficult to translate into today's language.)

“I went into it (the trial) On full investigation I argued it twice before the old Bench of Justice.

I won it you can see from the Opinion (newspaper?)-Previous to arguing it the last time, my faith in the correctness of the legal principals I maintained all the while increasing. I told Dred I should beat him and proposed to him that I would buy him and his family for $400.00 from his Master which I could easily have done, as he had no hopes of winning the case-and then Dred must make an agreement to pay me $100 a year, take care of my room, etc. until it was paid (little over two years) and he would be free-but he was certain of winning and thought it would be a waste of money and he is now a slave for life-hard is it not?…Before the decision Dred and his wife had to work day and night to live, he wore old clothes and always had a thin, anxious, worn look that belongs to a poor free negro… The moment the matter was settled and his Master took charge of him again, gave him a house, clothed him warmer and fed, he was another man, his face shines with fat and contentment-you can hear his loud guffaw a mile, and nothing does him more good than to sit on a Box in the sun and abuse “poor white folks”-Perhaps you say poor fellow he don't know any better. Yes, I admit he is in a poor state of existence but that is not his fault or his Masters-There he must remain, a happy and contented slave, than a poor squalid, disturbed free negro…”

In 1857 Mrs. Emerson remarried. Her husband was opposed to slavery and she returned the Dred Scott family to the Blow family who gave the Scotts their freedom.

Dred Scott died of tuberculosis in 1858 and is buried in St. Louis.