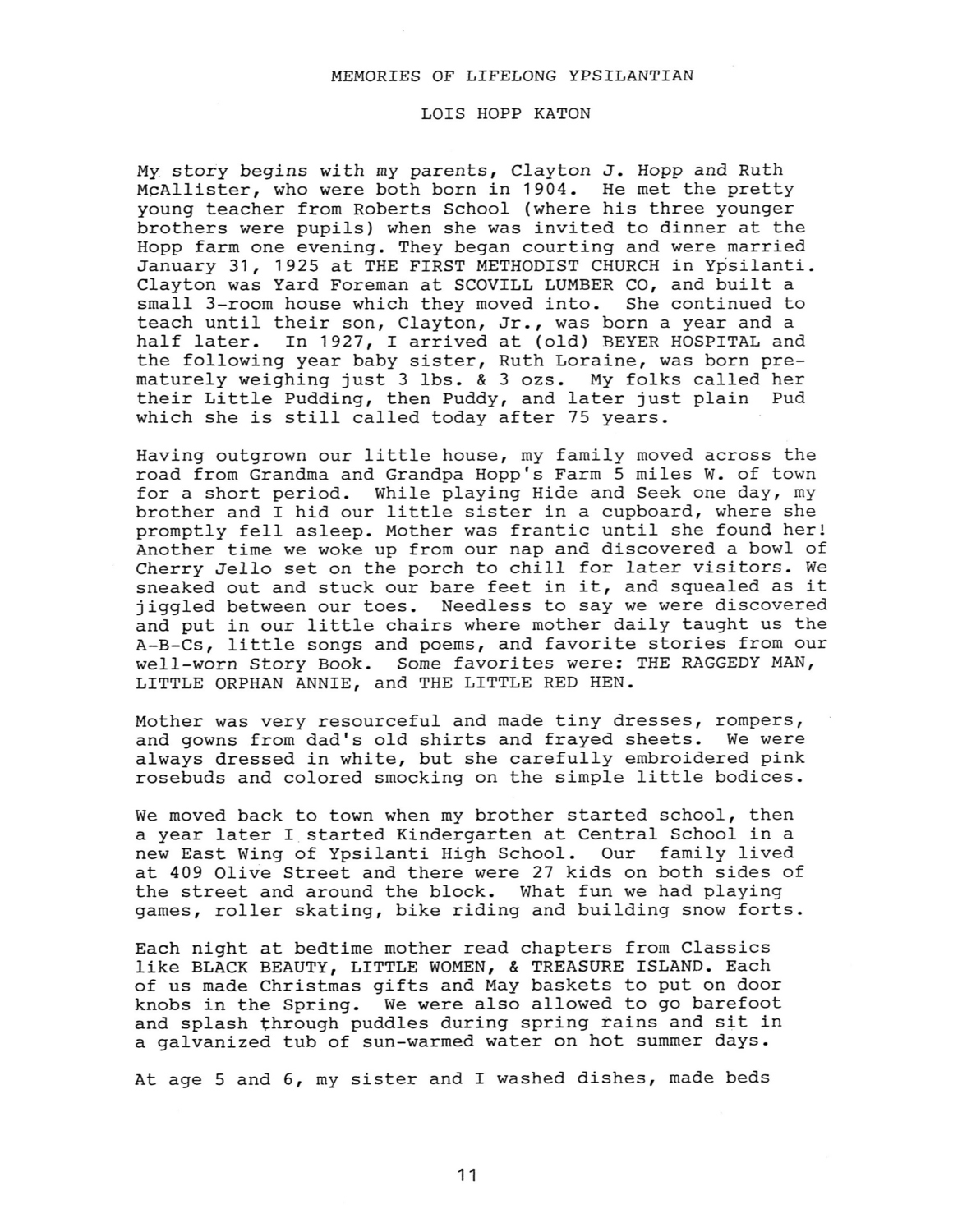 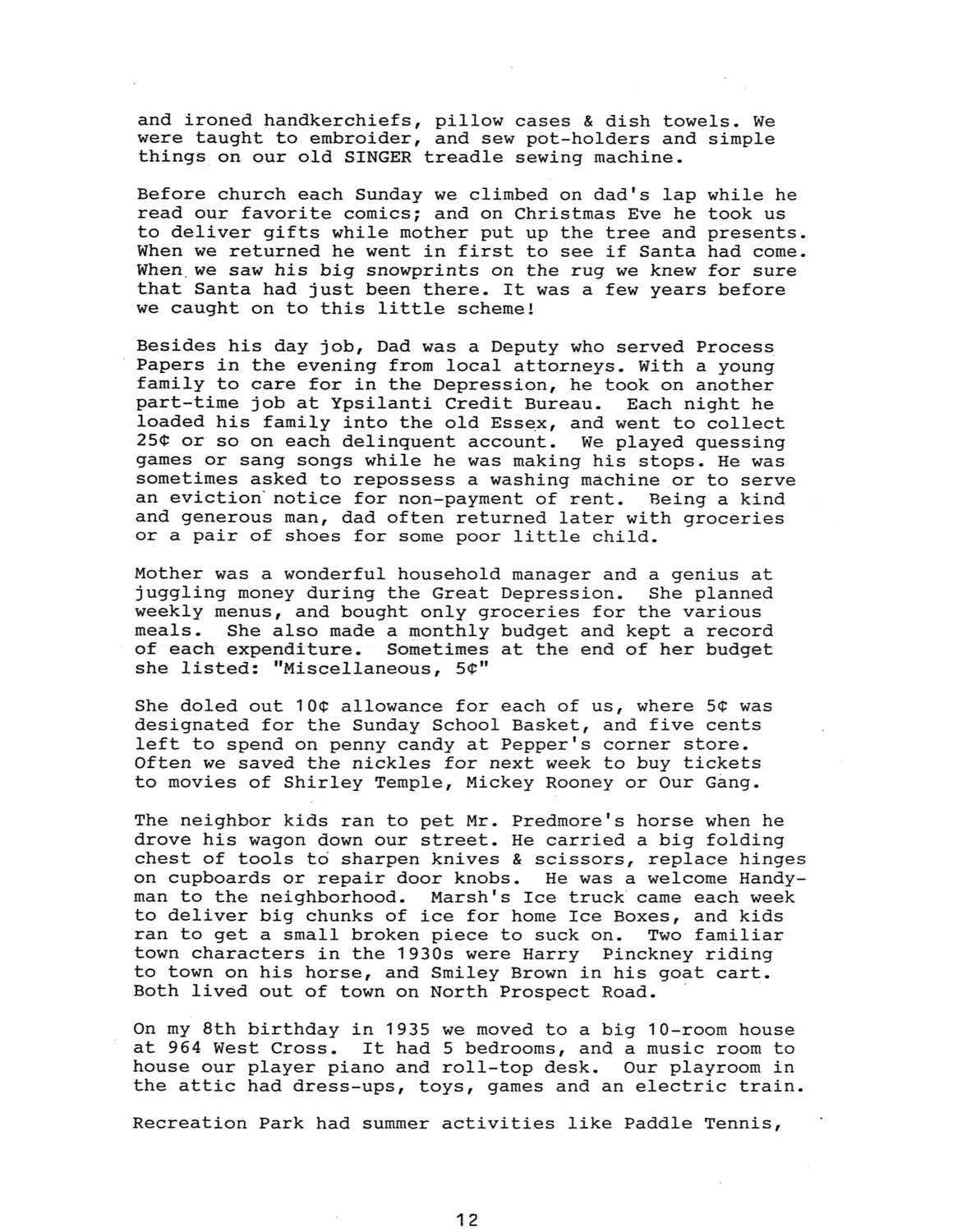 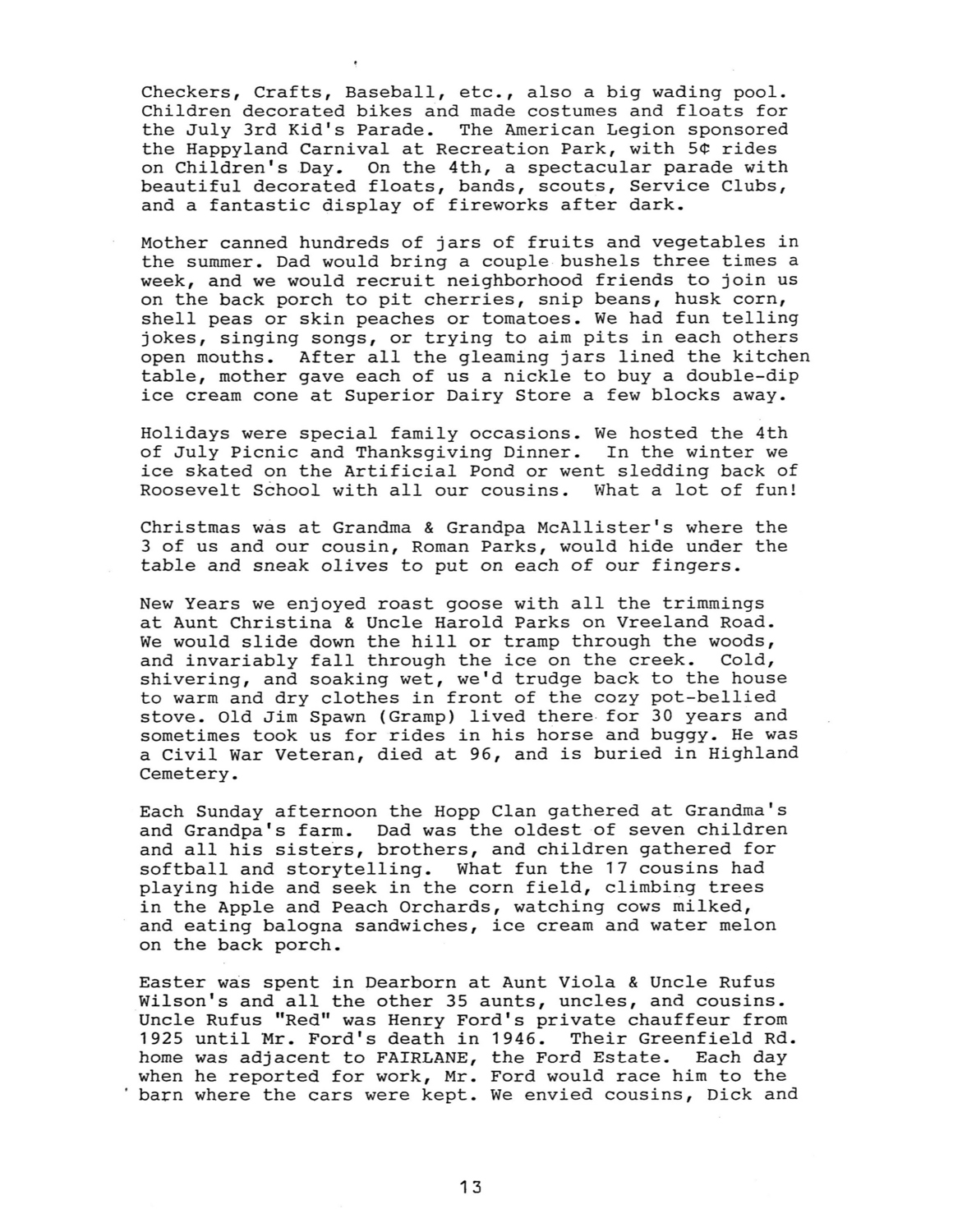 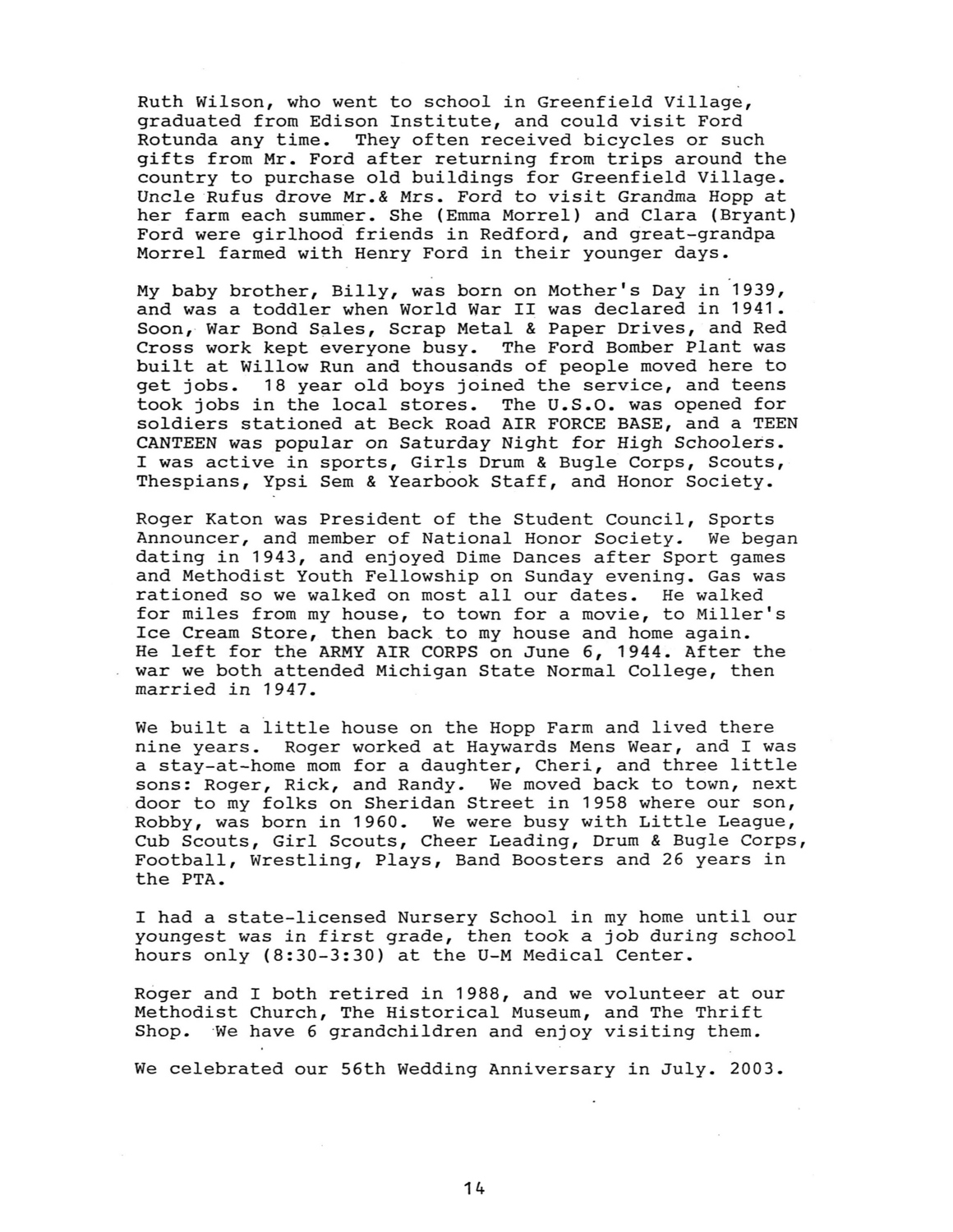 My story begins with my parents, Clayton J. Hopp and Ruth McAllister, who were both born in 1904. He met the pretty young teacher from Roberts School (where his three younger brothers were pupils) when she was invited to dinner at the Hopp farm one evening. They began courting and were married January 31, 1925 at THE FIRST METHODIST CHURCH in Ypsilanti. Clayton was Yard Foreman at SCOVILL LUMBER CO, and built a small 3-room house which they moved into. She continued to teach until their son, Clayton, Jr., was born a year and a half later. In 1927, I arrived at (old) BEYER HOSPITAL and the following year baby sister, Ruth Loraine, was born prematurely weighing just 3 lbs. & 3 ozs. My folks called her their Little Pudding, then Puddy, and later just plain Pud which she is still called today after 75 years.

Having outgrown our little house, my family moved across the road from Grandma and Grandpa Hopp's Farm 5 miles W. of town for a short period. While playing Hide and Seek one day, my brother and I hid our little sister in a cupboard, where she promptly fell asleep. Mother was frantic until she found her! Another time we woke up from our nap and discovered a bowl of Cherry Jello set on the porch to chill for later visitors. We sneaked out and stuck our bare feet in it, and squealed as it jiggled between our toes. Needless to say we were discovered and put in our little chairs where mother daily taught us the A-B-Cs, little songs and poems, and favorite stories from our well-worn Story Book. Some favorites were: THE RAGGEDY MAN, LITTLE ORPHAN ANNIE, and THE LITTLE RED HEN.

Mother was very resourceful and made tiny dresses, rompers, and gowns from dad's old shirts and frayed sheets. We were always dressed in white, but she carefully embroidered pink rosebuds and colored smocking on the simple little bodices.

We moved back to town when my brother started school, then a year later I started Kindergarten at Central School in a new East Wing of Ypsilanti High School. Our family lived at 409 Olive Street and there were 27 kids on both sides of the street and around the block. What fun we had playing games, roller skating, bike riding and building snow forts.

Each night at bedtime mother read chapters from Classics like BLACK BEAUTY, LITTLE WOMEN, & TREASURE ISLAND. Each of us made Christmas gifts and May baskets to put on door knobs in the Spring. We were also allowed to go barefoot and splash through puddles during spring rains and sit in a galvanized tub of sun-warmed water on hot summer days.

At age 5 and 6, my sister and I washed dishes, made beds and ironed handkerchiefs, pillow cases & dish towels. We were taught to embroider, and sew pot-holders and simple things on our old SINGER treadle sewing machine.

Before church each Sunday we climbed on dad's lap while he read our favorite comics; and on Christmas Eve he took us to deliver gifts while mother put up the tree and presents. When we returned he went in first to see if Santa had come. When we saw his big snowprints on the rug we knew for sure that Santa had just been there. It was a few years before we caught on to this little scheme!

Besides his day job, Dad was a Deputy who served Process Papers in the evening from local attorneys. With a young family to care for in the Depression, he took on another part-time job at Ypsilanti Credit Bureau. Each night he loaded his family into the old Essex, and went to collect 25¢ or so on each delinquent account. We played guessing games or sang songs while he was making his stops. He was sometimes asked to repossess a washing machine or to serve an eviction notice for non-payment of rent. Being a kind and generous man, dad often returned later with groceries or a pair of shoes for some poor little child.

Mother was a wonderful household manager and a genius at juggling money during the Great Depression. She planned weekly menus, and bought only groceries for the various meals. She also made a monthly budget and kept a record of each expenditure. Sometimes at the end of her budget she listed: “Miscellaneous, 5¢”

She doled out 10¢ allowance for each of us, where 5¢ was designated for the Sunday School Basket, and five cents left to spend on penny candy at Pepper's corner store. Often we saved the nickles for next week to buy tickets to movies of Shirley Temple, Mickey Rooney or Our Gang.

The neighbor kids ran to pet Mr. Predmore's horse when he drove his wagon down our street. He carried a big folding chest of tools to sharpen knives & scissors, replace hinges on cupboards or repair door knobs. He was a welcome Handyman to the neighborhood. Marsh's Ice truck came each week to deliver big chunks of ice for home Ice Boxes, and kids ran to get a small broken piece to suck on. Two familiar town characters in the 1930s were Harry Pinckney riding to town on his horse, and Smiley Brown in his goat cart. Both lived out of town on North Prospect Road.

On my 8th birthday in 1935 we moved to a big 10-room house at 964 West Cross. It had 5 bedrooms, and a music room to house our player piano and roll-top desk. Our playroom in the attic had dress-ups, toys, games and an electric train.

Recreation Park had summer activities like Paddle Tennis, Checkers, Crafts, Baseball, etc., also a big wading pool. Children decorated bikes and made costumes and floats for the July 3rd Kid's Parade. The American Legion sponsored the Happyland Carnival at Recreation Park, with 5¢ rides on Children's Day. On the 4th, a spectacular parade with beautiful decorated floats, bands, scouts, Service Clubs, and a fantastic display of fireworks after dark.

Mother canned hundreds of jars of fruits and vegetables in the summer. Dad would bring a couple bushels three times a week, and we would recruit neighborhood friends to join us on the back porch to pit cherries, snip beans, husk corn, shell peas or skin peaches or tomatoes. We had fun telling jokes, singing songs, or trying to aim pits in each others open mouths. After all the gleaming jars lined the kitchen table, mother gave each of us a nickle to buy a double-dip ice cream cone at Superior Dairy Store a few blocks away.

Holidays were special family occasions. We hosted the 4th of July Picnic and Thanksgiving Dinner. In the winter we ice skated on the Artificial Pond or went sledding back of Roosevelt School with all our cousins. What a lot of fun!

Christmas was at Grandma & Grandpa McAllister's where the 3 of us and our cousin, Roman Parks, would hide under the table and sneak olives to put on each of our fingers.

New Years we enjoyed roast goose with all the trimmings at Aunt Christina & Uncle Harold Parks on Vreeland Road. We would slide down the hill or tramp through the woods, and invariably fall through the ice on the creek. Cold, shivering, and soaking wet, we'd trudge back to the house to warm and dry clothes in front of the cozy pot-bellied stove. Old Jim Spawn (Gramp) lived there for 30 years and sometimes took us for rides in his horse and buggy. He was a Civil War Veteran, died at 96, and is buried in Highland Cemetery.

Each Sunday afternoon the Hopp Clan gathered at Grandma's and Grandpa's farm. Dad was the oldest of seven children and all his sisters, brothers, and children gathered for softball and storytelling. What fun the 17 cousins had playing hide and seek in the corn field, climbing trees in the Apple and Peach Orchards, watching cows milked, and eating bologna sandwiches, ice cream and water melon on the back porch.

Easter was spent in Dearborn at Aunt Viola & Uncle Rufus Wilson's and all the other 35 aunts, uncles, and cousins. Uncle Rufus “Red” was Henry Ford's private chauffeur from 1925 until Mr. Ford's death in 1946. Their Greenfield Rd. home was adjacent to FAIRLANE, the Ford Estate. Each day when he reported for work, Mr. Ford would race him to the barn where the cars were kept. We envied cousins, Dick and Ruth Wilson, who went to school in Greenfield Village, graduated from Edison Institute, and could visit Ford Rotunda any time. They often received bicycles or such gifts from Mr. Ford after returning from trips around the country to purchase old buildings for Greenfield Village. Uncle Rufus drove Mr. & Mrs. Ford to visit Grandma Hopp at her farm each summer. She (Emma Morrel) and Clara (Bryant) Ford were girlhood friends in Redford, and great-grandpa Morrel farmed with Henry Ford in their younger days.

My baby brother, Billy, was born on Mother's Day in 1939, and was a toddler when World War II was declared in 1941. Soon, War Bond Sales, Scrap Metal & Paper Drives, and Red Cross work kept everyone busy. The Ford Bomber Plant was built at Willow Run and thousands of people moved here to get jobs. 18 year old boys joined the service, and teens took jobs in the local stores. The U.S.O. was opened for soldiers stationed at Beck Road AIR FORCE BASE, and a TEEN CANTEEN was popular on Saturday Night for High Schoolers. I was active in sports, Girls Drum & Bugle Corps, Scouts, Thespians, Ypsi Sem & Yearbook Staff, and Honor Society.

Roger Katon was President of the Student Council, Sports Announcer, and member of National Honor Society. We began dating in 1943, and enjoyed Dime Dances after Sport games and Methodist Youth Fellowship on Sunday evening. Gas was rationed so we walked on most all our dates. He walked for miles from my house, to town for a movie, to Miller's Ice Cream Store, then back to my house and home again. He left for the ARMY AIR CORPS on June 6, 1944. After the war we both attended Michigan State Normal College, then married in 1947.

We built a little house on the Hopp Farm and lived there nine years. Roger worked at Haywards Mens Wear, and I was a stay-at-home mom for a daughter, Cheri, and three little sons: Roger, Rick, and Randy. We moved back to town, next door to my folks on Sheridan Street in 1958 where our son, Robby, was born in 1960. We were busy with Little League, Cub Scouts, Girl Scouts, Cheer Leading, Drum & Bugle Corps, Football, Wrestling, Plays, Band Boosters and 26 years in the PTA.

I had a state-licensed Nursery School in my home until our youngest was in first grade, then took a job during school hours only (8:30-3:30) at the U-M Medical Center.

Roger and I both retired in 1988, and we volunteer at our Methodist Church, The Historical Museum, and The Thrift Shop. We have 6 grandchildren and enjoy visiting them.

We celebrated our 56th Wedding Anniversary in July. 2003.