What is the Archives? 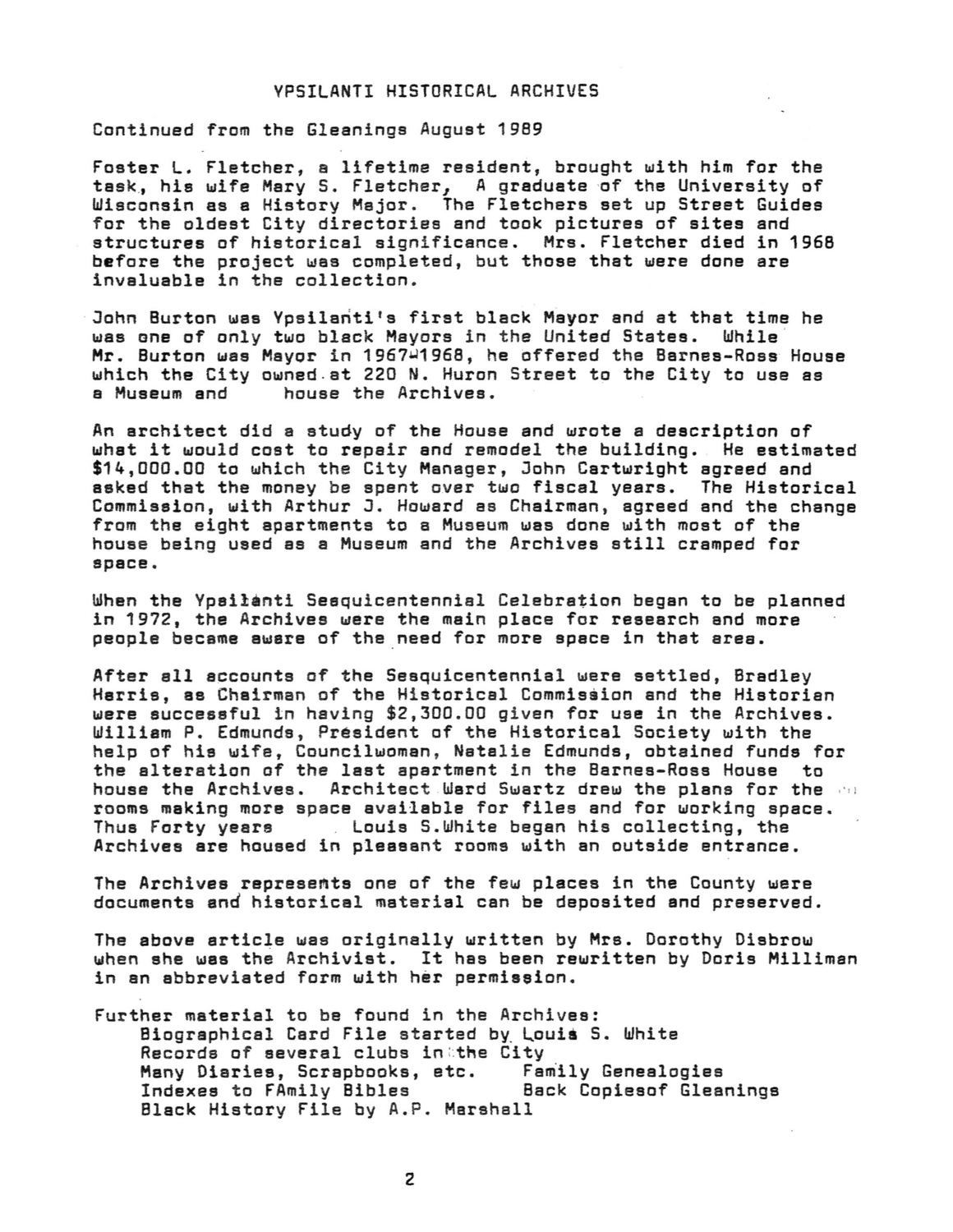 Continued from the Gleanings August 1989

Foster L. Fletcher, a lifetime resident, brought with him for the task, his wife Mary S. Fletcher, A graduate of the University of Wisconsin as a History Major. The Fletchers set up Street Guides for the oldest City directories and took pictures of sites and structures of historical significance. Mrs. Fletcher died in 1968 before the project was completed, but those that were done are invaluable in the collection.

John Burton was Ypsilanti's first black Mayor and at that time he was one of only two black Mayors in the United States. While Mr. Burton was Mayor in 1967–1968, he offered the Barnes-Ross House which the City owned at 220 N. Huron Street to the City to use as a Museum and house the Archives.

An architect did a study of the House and wrote a description of what it would cost to repair and remodel the building. He estimated &dollar;14,000.00 to which the City Manager, John Cartwright agreed and asked that the money be spent over two fiscal years. The Historical Commission, with Arthur J. Howard as Chairman, agreed and the change from the eight apartments to a Museum was done with most of the house being used as a Museum and the Archives still cramped for space.

When the Ypsilanti Seaquicentennial Celebration began to be planned in 1972, the Archives were the main place for research and more people became aware of the need for more space in that area.

After all accounts of the Seaquicentennial were settled, Bradley Harris, as Chairman of the Historical Commission and the Historian were successful in having &dollar;2,300.00 given for use in the Archives. William P. Edmunds, President of the Historical Society with the help of his wife, Councilwoman, Natalie Edmunds, obtained funds for the alteration of the last apartment in the Barnes-Ross House to house the Archives. Architect Ward Swartz drew the plans for the rooms making more space available for files and for working space. Thus Forty years Louis S. White began his collecting, the Archives are housed in pleasant rooms with an outside entrance.

The Archives represents one of the few places in the County were documents and historical material can be deposited and preserved.

The above article was originally written by Mrs. Dorothy Disbrow when she was the Archivist. It has been rewritten by Doris Milliman in an abbreviated form with her permission.

Further material to be found in the Archives: