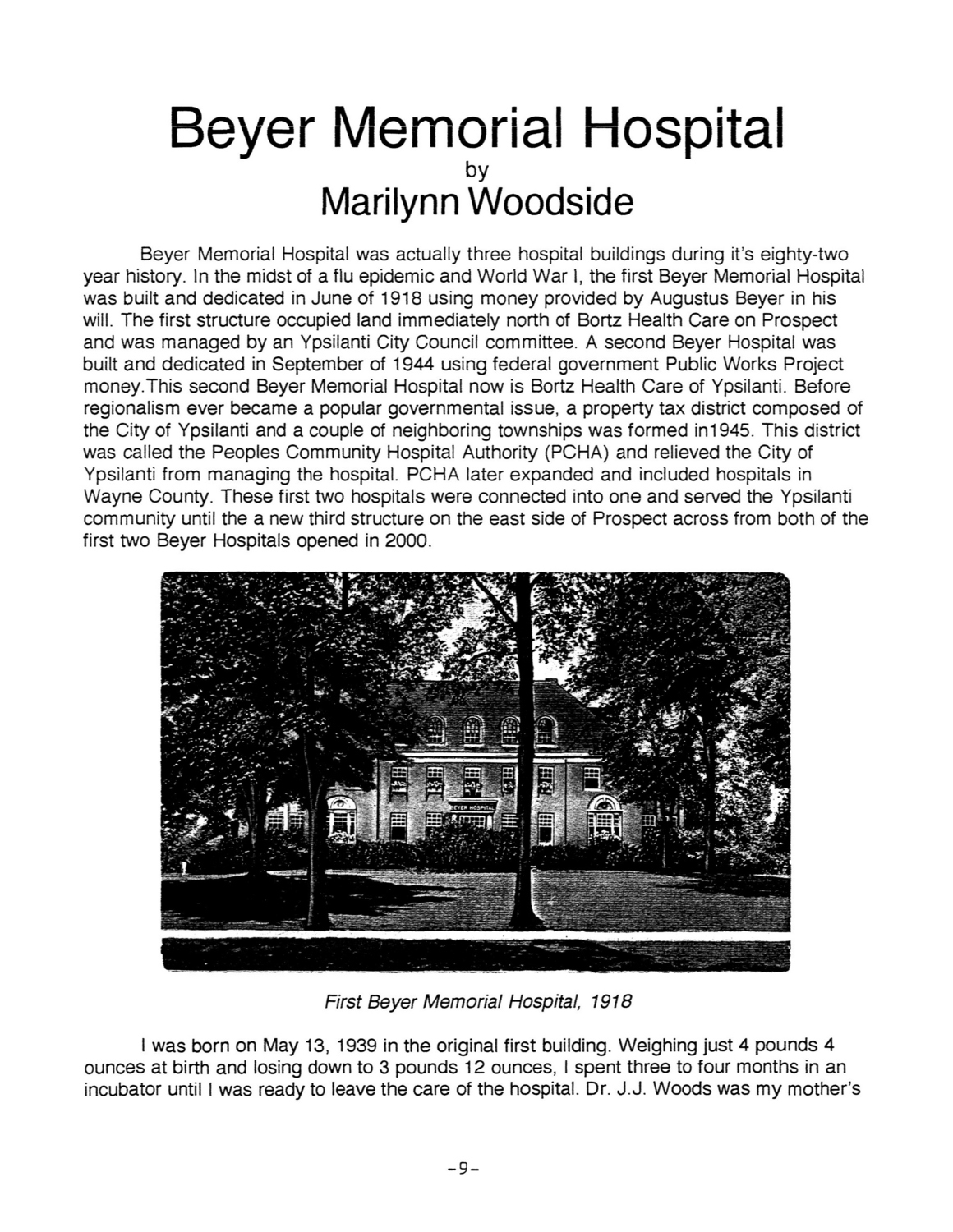 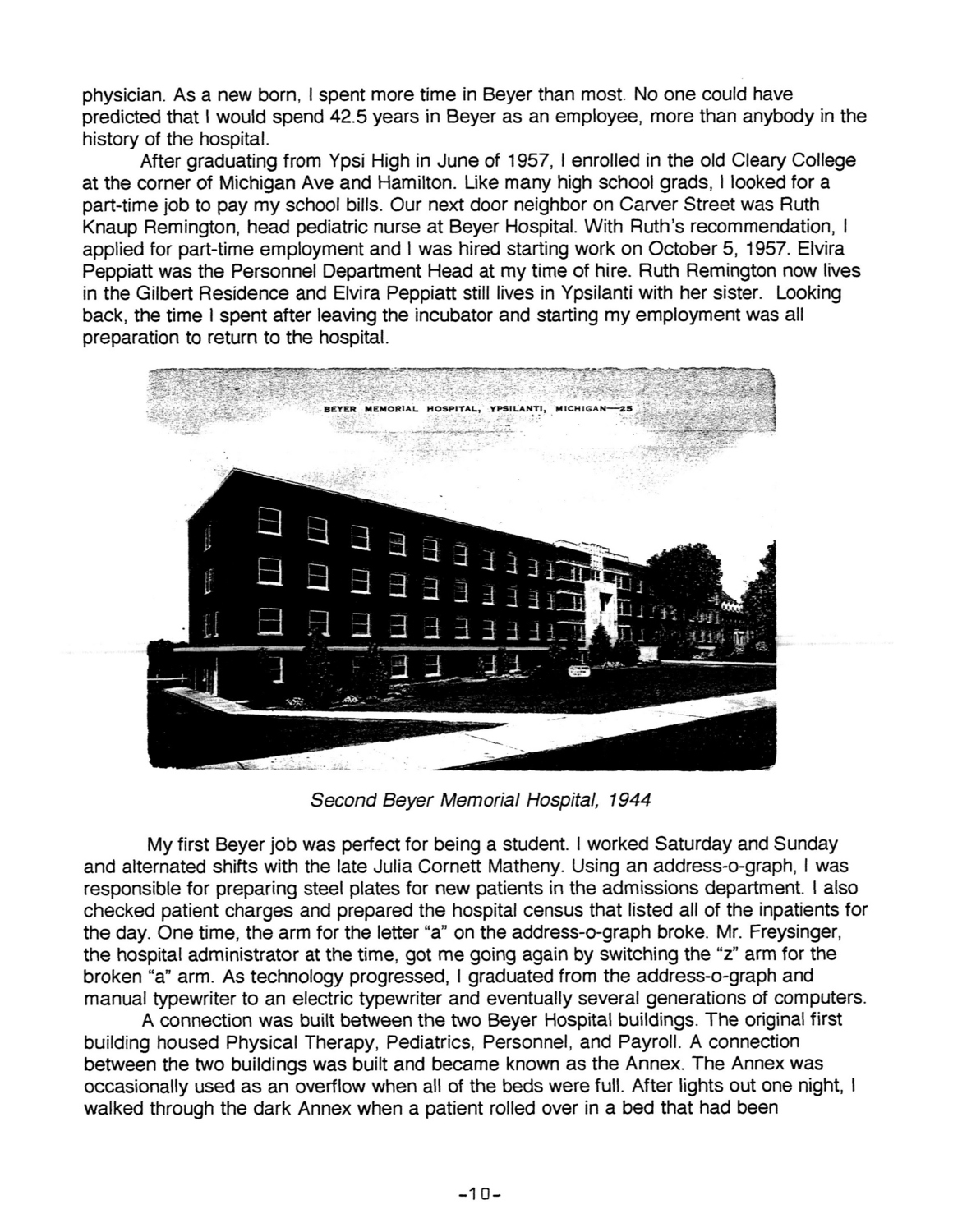 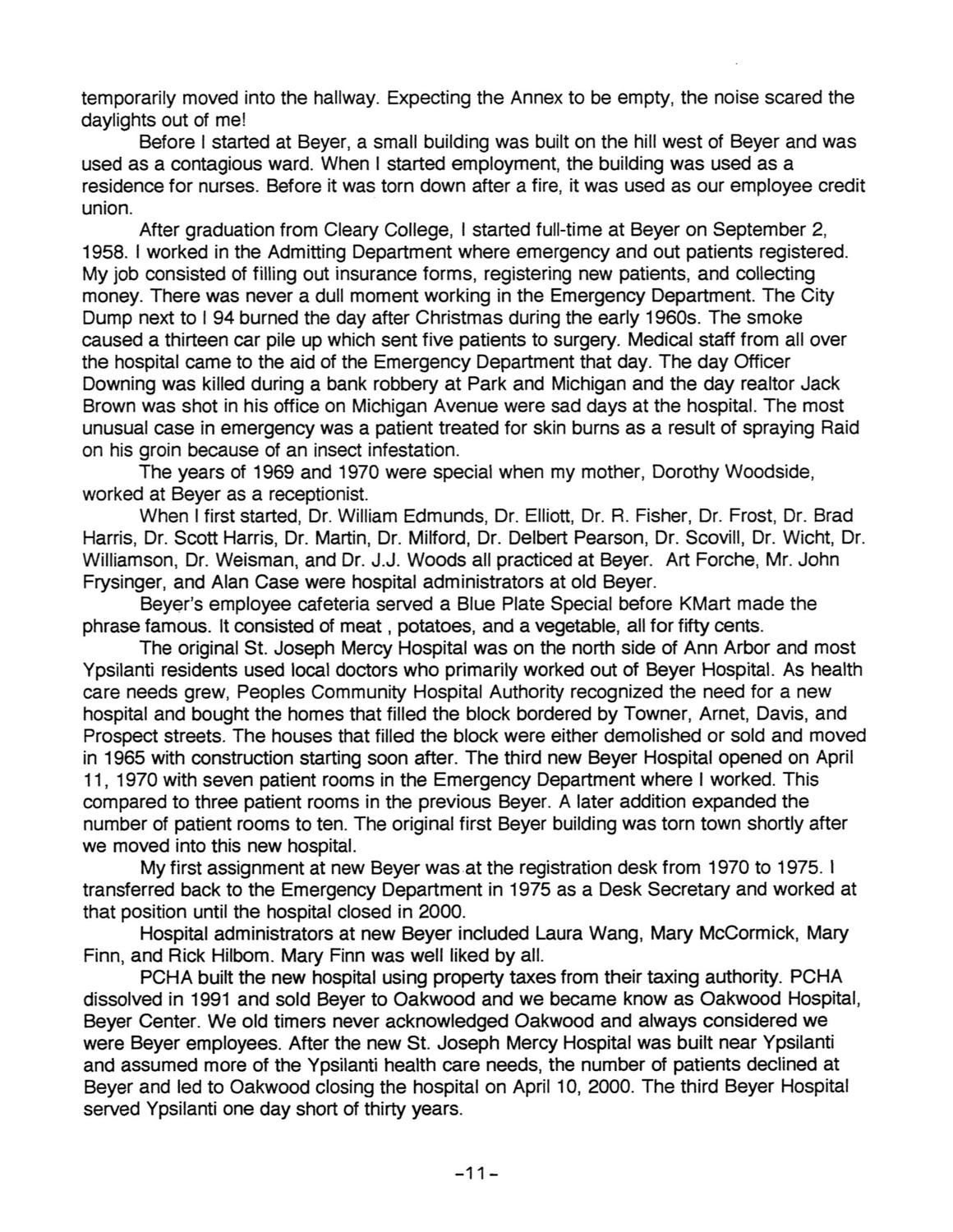 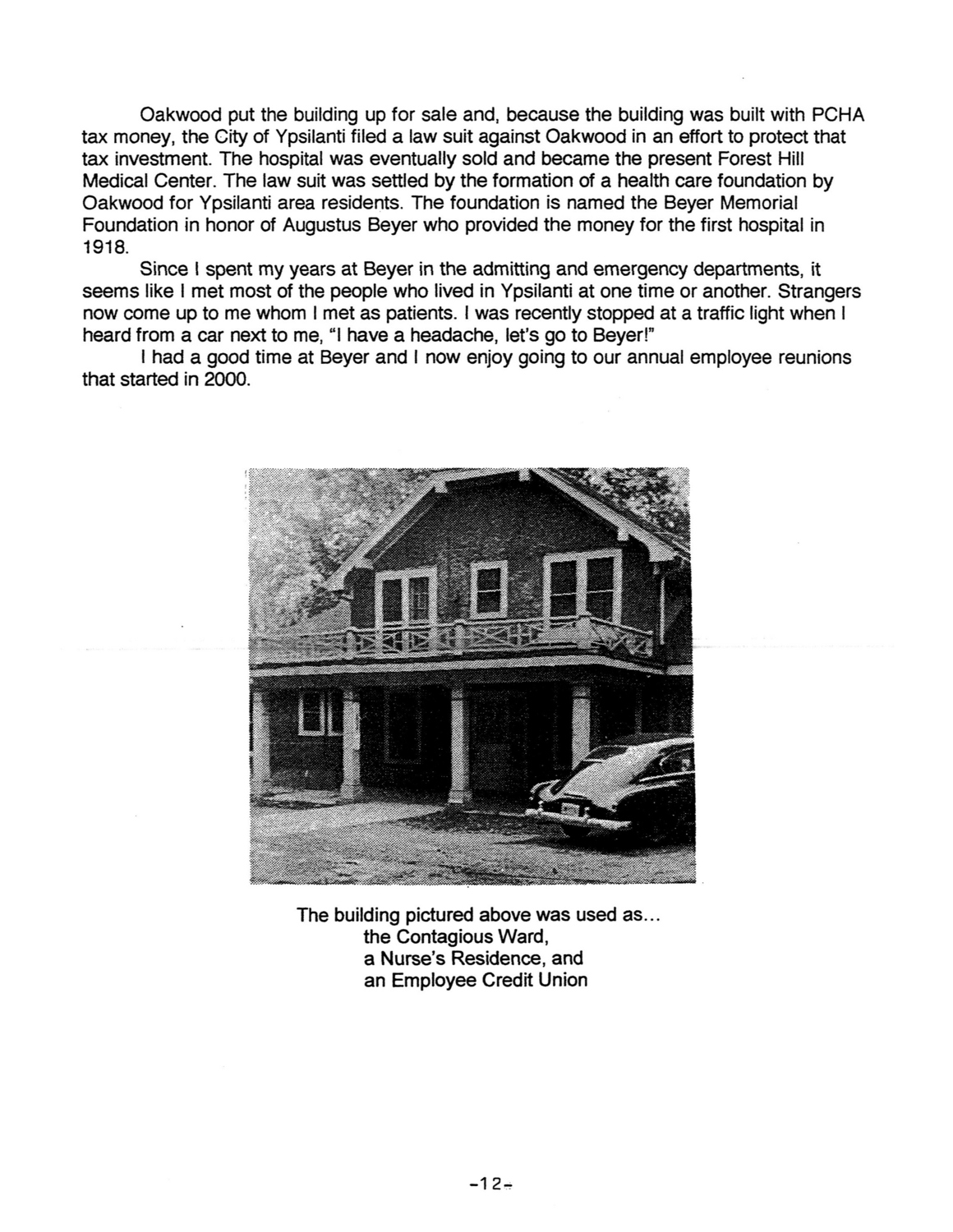 Beyer Memorial Hospital was actually three hospital buildings during it's eighty-two year history. In the midst of a flu epidemic and World War I, the first Beyer Memorial Hospital was built and dedicated in June of 1918 using money provided by Augustus Beyer in his will. The first structure occupied land immediately north of Bortz Health Care on Prospect and was managed by an Ypsilanti City Council committee. A second Beyer Hospital was built and dedicated in September of 1944 using federal government Public Works Project money. This second Beyer Memorial Hospital now is Bortz Health Care of Ypsilanti. Before regionalism ever became a popular governmental issue, a property tax district composed of the City of Ypsilanti and a couple of neighboring townships was formed in 1945. This district was called the Peoples Community Hospital Authority (PCHA) and relieved the City of Ypsilanti from managing the hospital. PCHA later expanded and included hospitals in Wayne County. These first two hospitals were connected into one and served the Ypsilanti community until the a new third structure on the east side of Prospect across from both of the first two Beyer Hospitals opened in 2000.

I was born on May 13, 1939 in the original first building. Weighing just 4 pounds 4 ounces at birth and losing down to 3 pounds 12 ounces, I spent three to four months in an incubator until I was ready to leave the care of the hospital. Dr. J. J. Woods was my mother's physician. As a new born, I spent more time in Beyer than most. No one could have predicted that I would spend 42.5 years in Beyer as an employee, more than anybody in the history of the hospital.

After graduating from Ypsi High in June of 1957. I enrolled in the old Cleary College at the corner of Michigan Ave and Hamilton. Like many high school grads, I looked for a part-time job to pay my school bills. Our next door neighbor on Carver Street was Ruth Knaup Remington, head pediatric nurse at Beyer Hospital. With Ruth's recommendation, I applied for part-time employment and I was hired starting work on October 5, 1957. Elvira Peppiatt was the Personnel Department Head at my time of hire. Ruth Remington now lives in the Gilbert Residence and Elvira Peppiatt still lives in Ypsilanti with her sister. Looking back, the time I spent after leaving the incubator and starting my employment was all preparation to return to the hospital.

My first Beyer job was perfect for being a student. I worked Saturday and Sunday and alternated shifts with the late Julia Cornett Matheny. Using an address-o-graph, I was responsible for preparing steel plates for new patients in the admissions department. I also checked patient charges and prepared the hospital census that listed all of the inpatients for the day. One time, the arm for the letter “a” on the address-o-graph broke. Mr. Freysinger, the hospital administrator at the time, got me going again by switching the “z” arm for the broken “a” arm. As technology progressed, I graduated from the address-o-graph and manual typewriter to an electric typewriter and eventually several generations of computers.

A connection was built between the two Beyer Hospital buildings. The original first building housed Physical Therapy, Pediatrics, Personnel, and Payroll. A connection between the two buildings was built and became known as the Annex. The Annex was occasionally used as an overflow when all of the beds were full. After lights out one night, I walked through the dark Annex when a patient rolled over in a bed that had been temporarily moved into the hallway. Expecting the Annex to be empty, the noise scared the daylights out of me!

After graduation from Cleary College, I started full-time at Beyer on September 2, 1958. I worked in the Admitting Department where emergency and out patients registered. My job consisted of filling out insurance forms, registering new patients, and collecting money. There was never a dull moment working in the Emergency Department. The City Dump next to I 94 burned the day after Christmas during the early 1960s. The smoke caused a thirteen car pile up which sent five patients to surgery. Medical staff from all over the hospital came to the aid of the Emergency Department that day. The day Officer Downing was killed during a bank robbery at Park and Michigan and the day realtor Jack Brown was shot in his office on Michigan Avenue were sad days at the hospital. The most unusual case in emergency was a patient treated for skin burns as a result of spraying Raid on his groin because of an insect infestation.

The years of 1969 and 1970 were special when my mother, Dorothy Woodside, worked at Beyer as a receptionist.

Beyer's employee cafeteria served a Blue Plate Special before KMart made the phrase famous. It consisted of meat, potatoes, and a vegetable, all for fifty cents.

The original St. Joseph Mercy Hospital was on the north side of Ann Arbor and most Ypsilanti residents used local doctors who primarily worked out of Beyer Hospital. As health care needs grew, Peoples Community Hospital Authority recognized the need for a new hospital and bought the homes that filled the block bordered by Towner, Arnet, Davis, and Prospect streets. The houses that filled the block were either demolished or sold and moved in 1965 with construction starting soon after. The third new Beyer Hospital opened on April 11, 1970 with seven patient rooms in the Emergency Department where I worked. This compared to three patient rooms in the previous Beyer. A later addition expanded the number of patient rooms to ten. The original first Beyer building was torn town shortly after we moved into this new hospital.

My first assignment at new Beyer was at the registration desk from 1970 to 1975. I transferred back to the Emergency Department in 1975 as a Desk Secretary and worked at that position until the hospital closed in 2000.

PCHA built the new hospital using property taxes from their taxing authority. PCHA dissolved in 1991 and sold Beyer to Oakwood and we became know as Oakwood Hospital, Beyer Center. We old timers never acknowledged Oakwood and always considered we were Beyer employees. After the new St. Joseph Mercy Hospital was built near Ypsilanti and assumed more of the Ypsilanti health care needs, the number of patients declined at Beyer and led to Oakwood closing the hospital on April 10, 2000. The third Beyer Hospital served Ypsilanti one day short of thirty years.

Oakwood put the building up for sale and, because the building was built with PCHA tax money, the City of Ypsilanti filed a law suit against Oakwood in an effort to protect that tax investment. The hospital was eventually sold and became the present Forest Hill Medical Center. The law suit was settled by the formation of a health care foundation by Oakwood for Ypsilanti area residents. The foundation is named the Beyer Memorial Foundation in honor of Augustus Beyer who provided the money for the first hospital in 1918.

Since I spent my years at Beyer in the admitting and emergency departments, it seems like I met most of the people who lived in Ypsilanti at one time or another. Strangers now come up to me whom I met as patients. I was recently stopped at a traffic light when I heard from a car next to me, “I have a headache, let's go to Beyer!”

I had a good time at Beyer and I now enjoy going to our annual employee reunions that started in 2000.

The building pictured above was used as… the Contagious Ward, a Nurse's Residence, and an Employee Credit Union