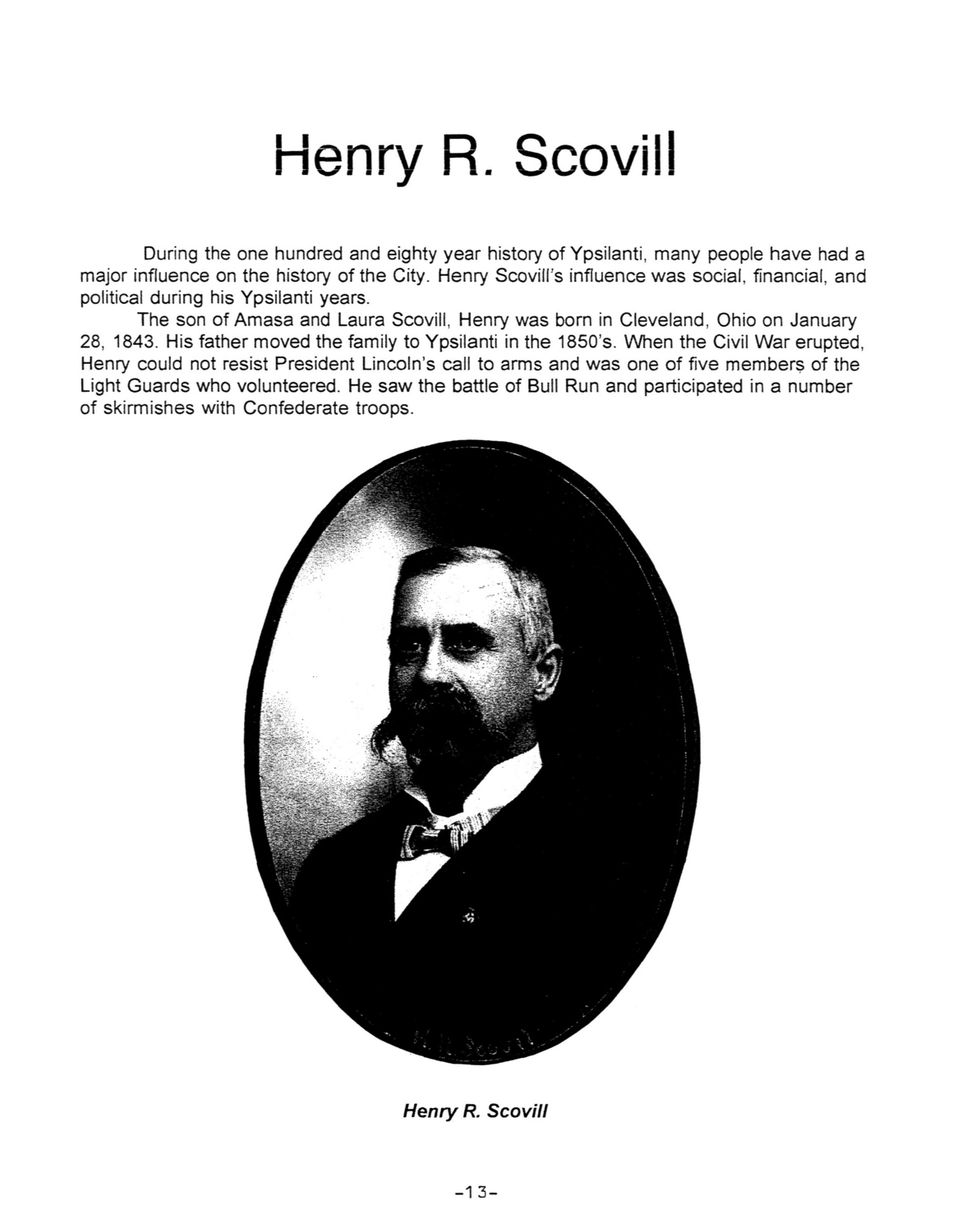 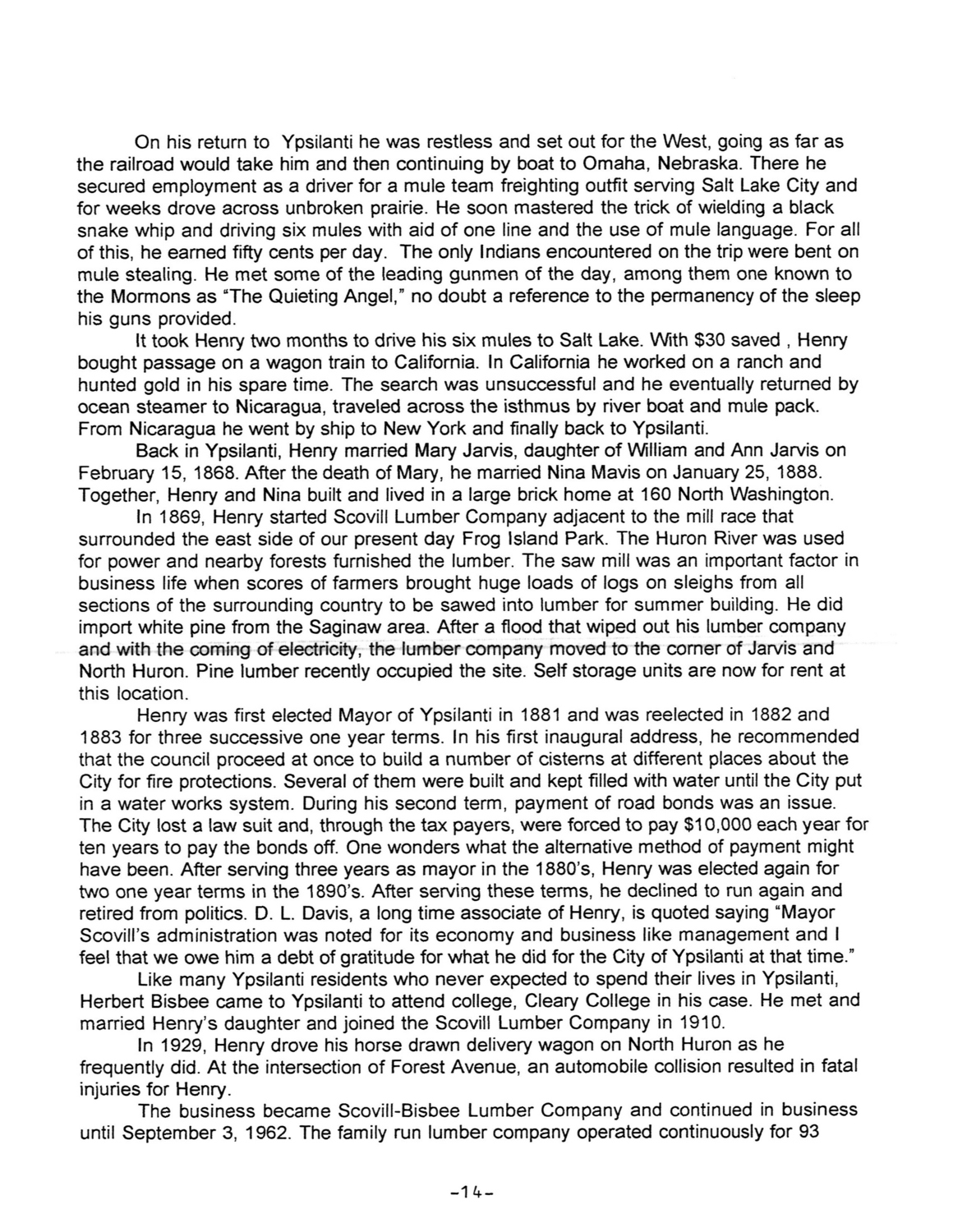 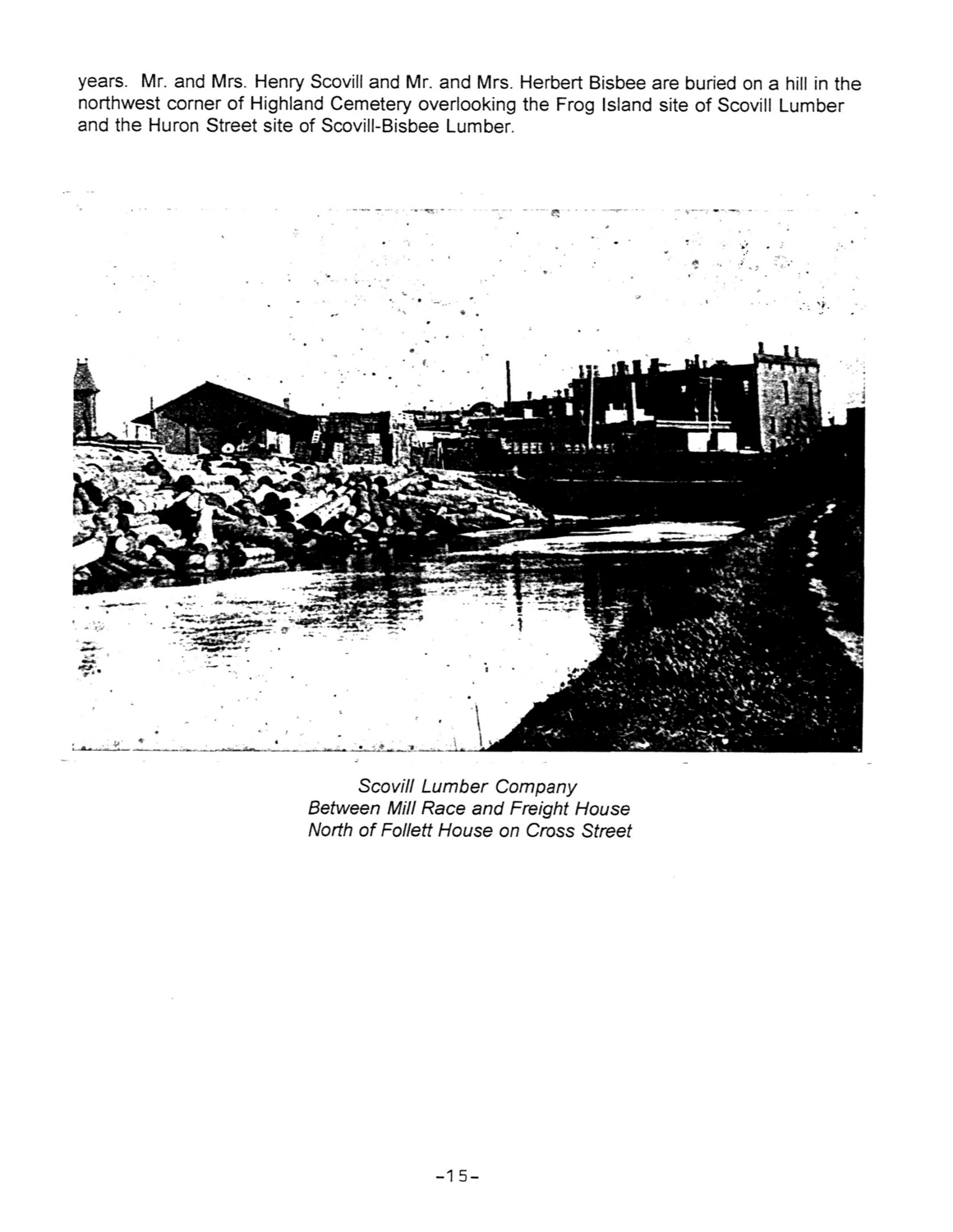 During the one hundred and eighty year history of Ypsilanti, many people have had a major influence on the history of the City. Henry Scovill's influence was social, financial, and political during his Ypsilanti years.

The son of Amasa and Laura Scovill, Henry was born in Cleveland, Ohio on January 28, 1843. His father moved the family to Ypsilanti in the 1850's. When the Civil War erupted, Henry could not resist President Lincoln's call to arms and was one of five members of the Light Guards who volunteered. He saw the battle of Bull Run and participated in a number of skirmishes with Confederate troops.

On his return to Ypsilanti he was restless and set out for the West, going as far as the railroad would take him and then continuing by boat to Omaha, Nebraska. There he secured employment as a driver for a mule team freighting outfit serving Salt Lake City and for weeks drove across unbroken prairie. He soon mastered the trick of wielding a black snake whip and driving six mules with aid of one line and the use of mule language. For all of this, he earned fifty cents per day. The only Indians encountered on the trip were bent on mule stealing. He met some of the leading gunmen of the day, among them one known to the Mormons as “The Quieting Angel,” no doubt a reference to the permanency of the sleep his guns provided.

It took Henry two months to drive his six mules to Salt Lake. With &dollar;30 saved, Henry bought passage on a wagon train to California. In California he worked on a ranch and hunted gold in his spare time. The search was unsuccessful and he eventually returned by ocean steamer to Nicaragua, traveled across the isthmus by river boat and mule pack. From Nicaragua he went by ship to New York and finally back to Ypsilanti.

Back in Ypsilanti, Henry married Mary Jarvis, daughter of William and Ann Jarvis on February 15, 1868. After the death of Mary, he married Nina Mavis on January 25, 1888. Together, Henry and Nina built and lived in a large brick home at 160 North Washington.

In 1869, Henry started Scovill Lumber Company adjacent to the mill race that surrounded the east side of our present day Frog Island Park. The Huron River was used for power and nearby forests furnished the lumber. The saw mill was an important factor in business life when scores of farmers brought huge loads of logs on sleighs from all sections of the surrounding country to be sawed into lumber for summer building. He did import white pine from the Saginaw area. After a flood that wiped out his lumber company and with the coming of electricity, the lumber company moved to the corner of Jarvis and North Huron. Pine lumber recently occupied the site. Self storage units are now for rent at this location.

Henry was first elected Mayor of Ypsilanti in 1881 and was reelected in 1882 and 1883 for three successive one year terms. In his first inaugural address, he recommended that the council proceed at once to build a number of cisterns at different places about the City for fire protections. Several of them were built and kept filled with water until the City put in a water works system. During his second term, payment of road bonds was an issue. The City lost a law suit and, through the tax payers, were forced to pay &dollar;10,000 each year for ten years to pay the bonds off. One wonders what the alternative method of payment might have been. After serving three years as mayor in the 1880's, Henry was elected again for two one year terms in the 1890's. After serving these terms, he declined to run again and retired from politics. D. L. Davis, a long time associate of Henry, is quoted saying “Mayor Scovill's administration was noted for its economy and business like management and I feel that we owe him a debt of gratitude for what he did for the City of Ypsilanti at that time.”

Like many Ypsilanti residents who never expected to spend their lives in Ypsilanti, Herbert Bisbee came to Ypsilanti to attend college, Cleary College in his case. He met and married Henry's daughter and joined the Scovill Lumber Company in 1910.

In 1929, Henry drove his horse drawn delivery wagon on North Huron as he frequently did. At the intersection of Forest Avenue, an automobile collision resulted in fatal injuries for Henry.

The business became Scovill-Bisbee Lumber Company and continued in business until September 3, 1962. The family run lumber company operated continuously for 93 years. Mr. and Mrs. Henry Scovill and Mr. and Mrs. Herbert Bisbee are buried on a hill in the northwest corner of Highland Cemetery overlooking the Frog Island site of Scovill Lumber and the Huron Street site of Scovill-Bisbee Lumber.