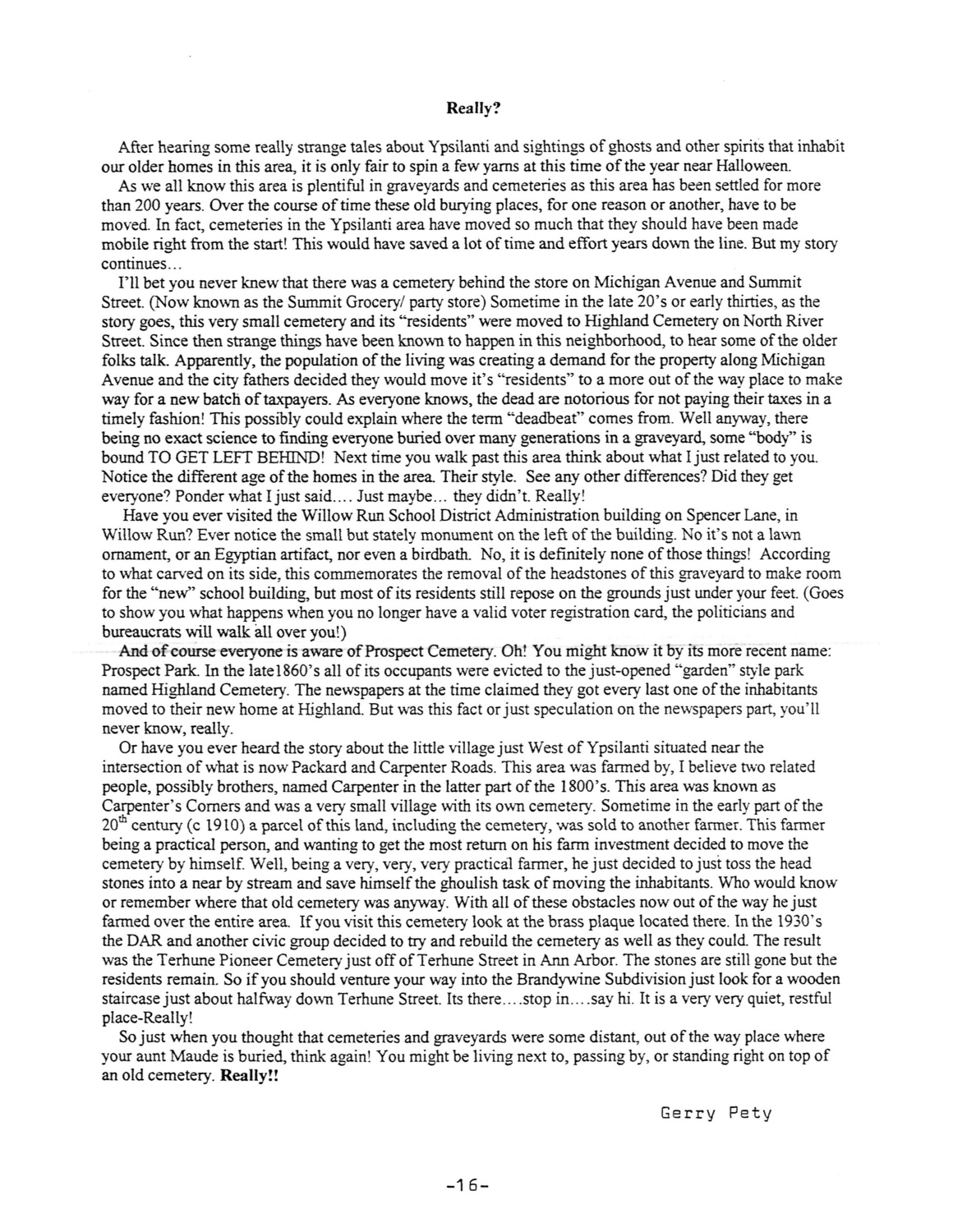 After hearing some really strange tales about Ypsilanti and sightings of ghosts and other spirits that inhabit our older homes in this area, it is only fair to spin a few yarns at this time of the year near Halloween.

As we all know this area is plentiful in graveyards and cemeteries as this area has been settled for more than 200 years. Over the course of time these old burying places, for one reason or another, have to be moved. In fact, cemeteries in the Ypsilanti area have moved so much that they should have been made mobile right from the start! This would have saved a lot of time and effort years down the line. But my story continues…

I'll bet you never knew that there was a cemetery behind the store on Michigan Avenue and Summit Street. (Now known as the Summit Grocery/ party store) Sometime in the late 20's or early thirties, as the story goes, this very small cemetery and its “residents” were moved to Highland Cemetery on North River Street. Since then strange things have been known to happen in this neighborhood, to hear some of the older folks talk. Apparently, the population of the living was creating a demand for the property along Michigan Avenue and the city fathers decided they would move it's “residents” to a more out of the way place to make way for a new batch of taxpayers. As everyone knows, the dead are notorious for not paying their taxes in a timely fashion! This possibly could explain where the term “deadbeat” comes from. Well anyway, there being no exact science to finding everyone buried over many generations in a graveyard, some “body” is bound TO GET LEFT BEHIND! Next time you walk past this area think about what I just related to you. Notice the different age of the homes in the area. Their style. See any other differences? Did they get everyone? Ponder what I just said…. Just maybe… they didn't. Really!

Have you ever visited the Willow Run School District Administration building on Spencer Lane, in Willow Run? Ever notice the small but stately monument on the left of the building. No it's not a lawn ornament, or an Egyptian artifact, nor even a birdbath. No, it is definitely none of those things! According to what carved on its side, this commemorates the removal of the headstones of this graveyard to make room for the “new” school building, but most of its residents still repose on the grounds just under your feet. (Goes to show you what happens when you no longer have a valid voter registration card, the politicians and bureaucrats will walk all over you!)

And of course everyone is aware of Prospect Cemetery. Oh! You might know it by its more recent name: Prospect Park. In the late 1860's all of its occupants were evicted to the just-opened “garden” style park named Highland Cemetery. The newspapers at the time claimed they got every last one of the inhabitants moved to their new home at Highland. But was this fact or just speculation on the newspapers part, you'll never know, really.

Or have you ever heard the story about the little village just West of Ypsilanti situated near the intersection of what is now Packard and Carpenter Roads. This area was farmed by, I believe two related people, possibly brothers, named Carpenter in the latter part of the 1800's. This area was known as Carpenter's Corners and was a very small village with its own cemetery. Sometime in the early part of the 20 & century (c 1910) a parcel of this land, including the cemetery, was sold to another farmer. This farmer being a practical person, and wanting to get the most return on his farm investment decided to move the cemetery by himself. Well, being a very, very, very practical farmer, he just decided to just toss the head stones into a near by stream and save himself the ghoulish task of moving the inhabitants. Who would know or remember where that old cemetery was anyway. With all of these obstacles now out of the way he just farmed over the entire area. If you visit this cemetery look at the brass plaque located there. In the 1930's the DAR and another civic group decided to try and rebuild the cemetery as well as they could. The result was the Terhune Pioneer Cemetery just off of Terhune Street in Ann Arbor. The stones are still gone but the residents remain. So if you should venture your way into the Brandywine Subdivision just look for a wooden staircase just about halfway down Terhune Street. Its there… stop in… say hi. It is a very very quiet, restful place-Really!

So just when you thought that cemeteries and graveyards were some distant, out of the way place where your aunt Maude is buried, think again! You might be living next to, passing by, or standing right on top of an old cemetery. Really!!