A Christmas Surprise for Grandma 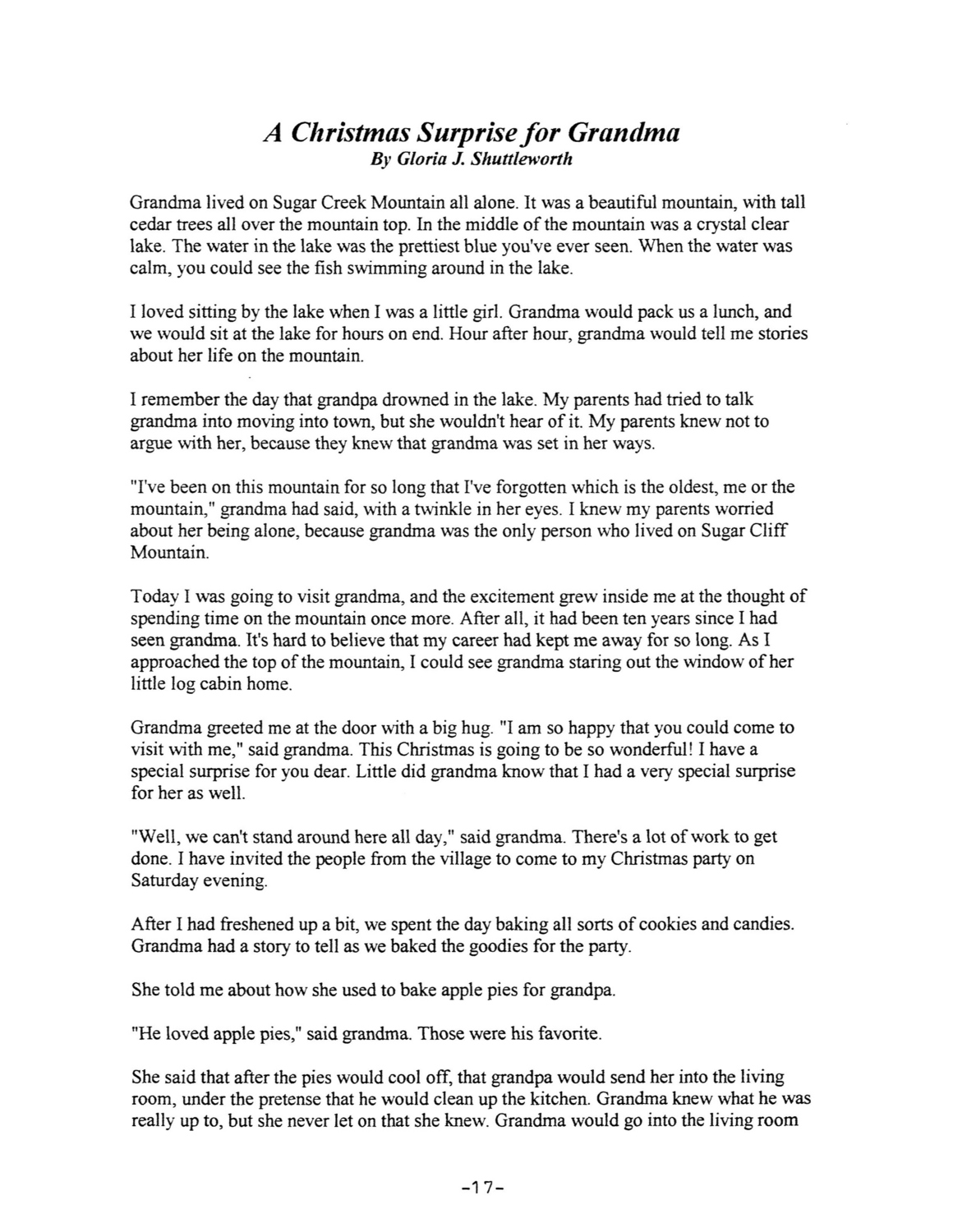 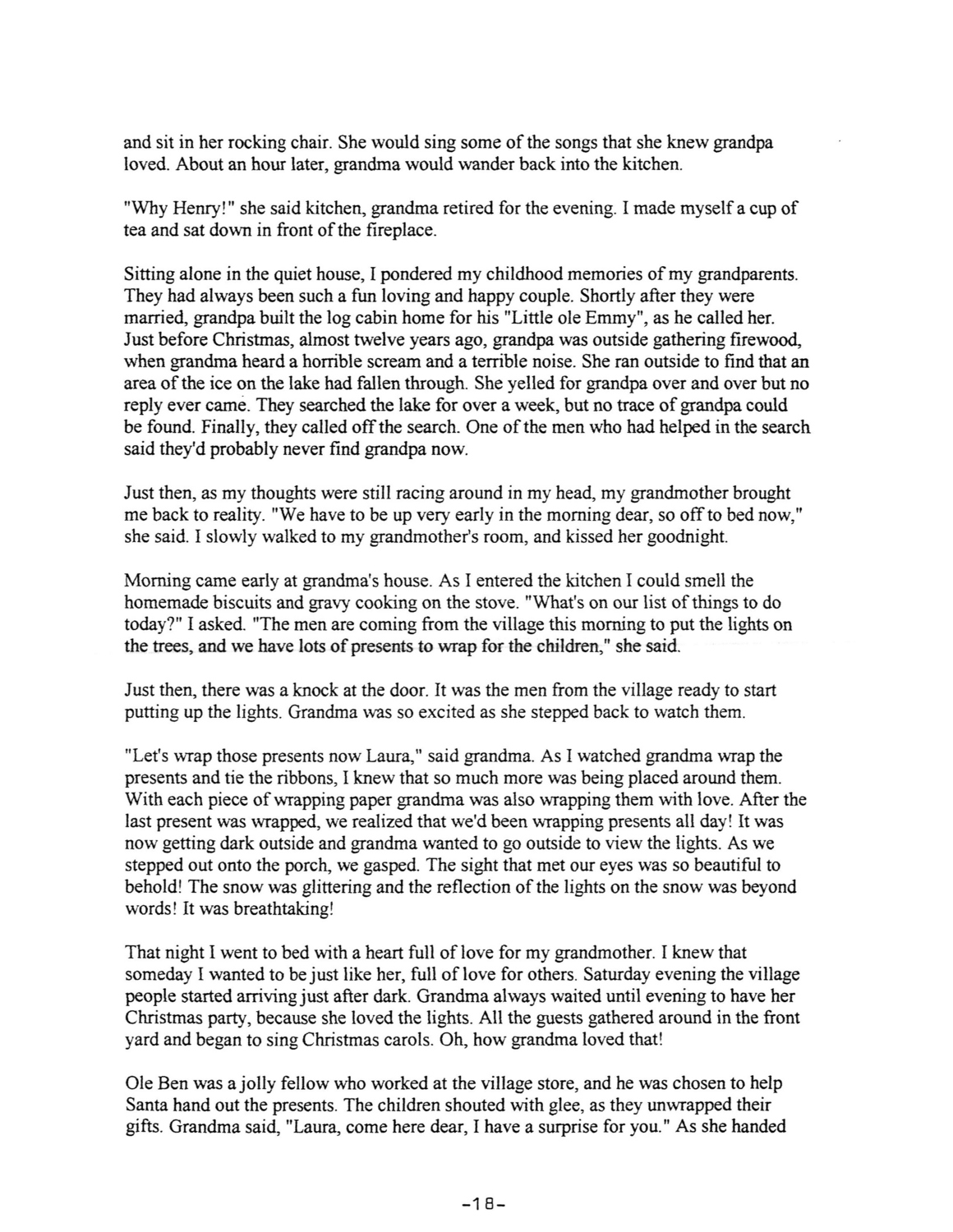 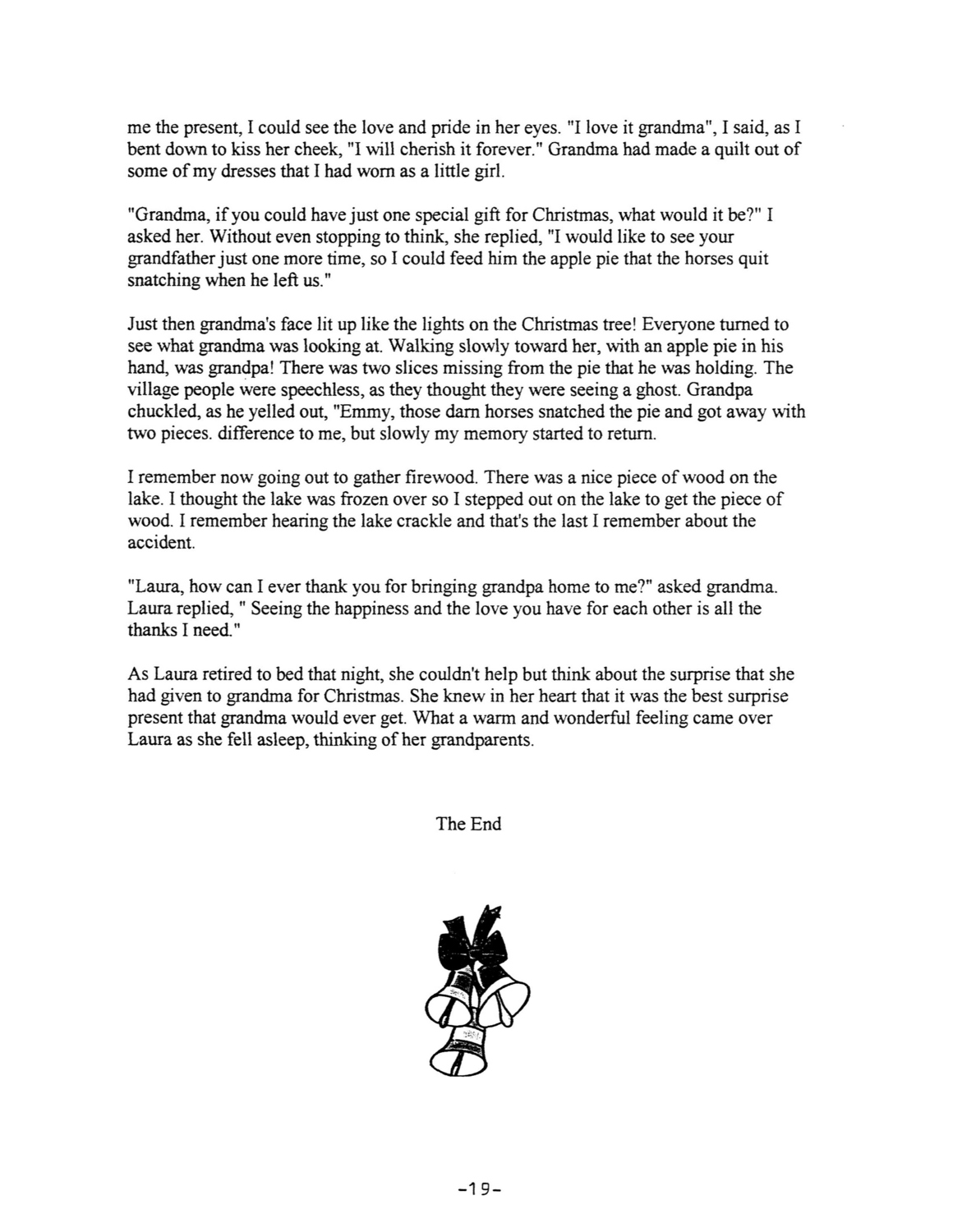 Grandma lived on Sugar Creek Mountain all alone. It was a beautiful mountain, with tall cedar trees all over the mountain top. In the middle of the mountain was a crystal clear lake. The water in the lake was the prettiest blue you've ever seen. When the water was calm, you could see the fish swimming around in the lake.

I loved sitting by the lake when I was a little girl. Grandma would pack us a lunch, and we would sit at the lake for hours on end. Hour after hour, grandma would tell me stories about her life on the mountain.

I remember the day that grandpa drowned in the lake. My parents had tried to talk grandma into moving into town, but she wouldn't hear of it. My parents knew not to argue with her, because they knew that grandma was set in her ways.

“I've been on this mountain for so long that I've forgotten which is the oldest, me or the mountain,” grandma had said, with a twinkle in her eyes. I knew my parents worried about her being alone, because grandma was the only person who lived on Sugar Cliff Mountain.

Today I was going to visit grandma, and the excitement grew inside me at the thought of spending time on the mountain once more. After all, it had been ten years since I had seen grandma. It's hard to believe that my career had kept me away for so long. As I approached the top of the mountain, I could see grandma staring out the window of her little log cabin home.

“Well, we can't stand around here all day,” said grandma. There's a lot of work to get done. I have invited the people from the village to come to my Christmas party on Saturday evening.

After I had freshened up a bit, we spent the day baking all sorts of cookies and candies. Grandma had a story to tell as we baked the goodies for the party.

She told me about how she used to bake apple pies for grandpa.

“He loved apple pies,” said grandma. Those were his favorite.

She said that after the pies would cool off, that grandpa would send her into the living room, under the pretense that he would clean up the kitchen. Grandma knew what he was really up to, but she never let on that she knew. Grandma would go into the living room and sit in her rocking chair. She would sing some of the songs that she knew grandpa loved. About an hour later, grandma would wander back into the kitchen.

“Why Henry!” she said kitchen, grandma retired for the evening. I made myself a cup of tea and sat down in front of the fireplace.

Sitting alone in the quiet house, I pondered my childhood memories of my grandparents. They had always been such a fun loving and happy couple. Shortly after they were married, grandpa built the log cabin home for his “Little ole Emmy”, as he called her. Just before Christmas, almost twelve years ago, grandpa was outside gathering firewood, when grandma heard a horrible scream and a terrible noise. She ran outside to find that an area of the ice on the lake had fallen through. She yelled for grandpa over and over but no reply ever came. They searched the lake for over a week, but no trace of grandpa could be found. Finally, they called off the search. One of the men who had helped in the search said they'd probably never find grandpa now.

Just then, as my thoughts were still racing around in my head, my grandmother brought me back to reality. “We have to be up very early in the morning dear, so off to bed now,” she said. I slowly walked to my grandmother's room, and kissed her goodnight.

Morning came early at grandma's house. As I entered the kitchen I could smell the homemade biscuits and gravy cooking on the stove. “What's on our list of things to do today?” I asked. “The men are coming from the village this morning to put the lights on the trees, and we have lots of presents to wrap for the children,” she said.

Just then, there was a knock at the door. It was the men from the village ready to start putting up the lights. Grandma was so excited as she stepped back to watch them.

“Let's wrap those presents now Laura,” said grandma. As I watched grandma wrap the presents and tie the ribbons, I knew that so much more was being placed around them. With each piece of wrapping paper grandma was also wrapping them with love. After the last present was wrapped, we realized that we'd been wrapping presents all day! It was now getting dark outside and grandma wanted to go outside to view the lights. As we stepped out onto the porch, we gasped. The sight that met our eyes was so beautiful to behold! The snow was glittering and the reflection of the lights on the snow was beyond words! It was breathtaking!

That night I went to bed with a heart full of love for my grandmother. I knew that someday I wanted to be just like her, full of love for others. Saturday evening the village people started arriving just after dark. Grandma always waited until evening to have her Christmas party, because she loved the lights. All the guests gathered around in the front yard and began to sing Christmas carols. Oh, how grandma loved that!

Ole Ben was a jolly fellow who worked at the village store, and he was chosen to help Santa hand out the presents. The children shouted with glee, as they unwrapped their gifts. Grandma said, “Laura, come here dear, I have a surprise for you.” As she handed me the present, I could see the love and pride in her eyes. “I love it grandma”, I said, as I bent down to kiss her cheek, “I will cherish it forever.” Grandma had made a quilt out of some of my dresses that I had worn as a little girl.

“Grandma, if you could have just one special gift for Christmas, what would it be?” I asked her. Without even stopping to think, she replied, “I would like to see your grandfather just one more time, so I could feed him the apple pie that the horses quit snatching when he left us.”

Just then grandma's face lit up like the lights on the Christmas tree! Everyone turned to see what grandma was looking at. Walking slowly toward her, with an apple pie in his hand, was grandpa! There was two slices missing from the pie that he was holding. The village people were speechless, as they thought they were seeing a ghost. Grandpa chuckled, as he yelled out, “Emmy, those darn horses snatched the pie and got away with two pieces, difference to me, but slowly my memory started to return.

“Laura, how can I ever thank you for bringing grandpa home to me?” asked grandma. Laura replied,” Seeing the happiness and the love you have for each other is all the thanks I need.”

As Laura retired to bed that night, she couldn't help but think about the surprise that she had given to grandma for Christmas. She knew in her heart that it was the best surprise present that grandma would ever get. What a warm and wonderful feeling came over Laura as she fell asleep, thinking of her grandparents.