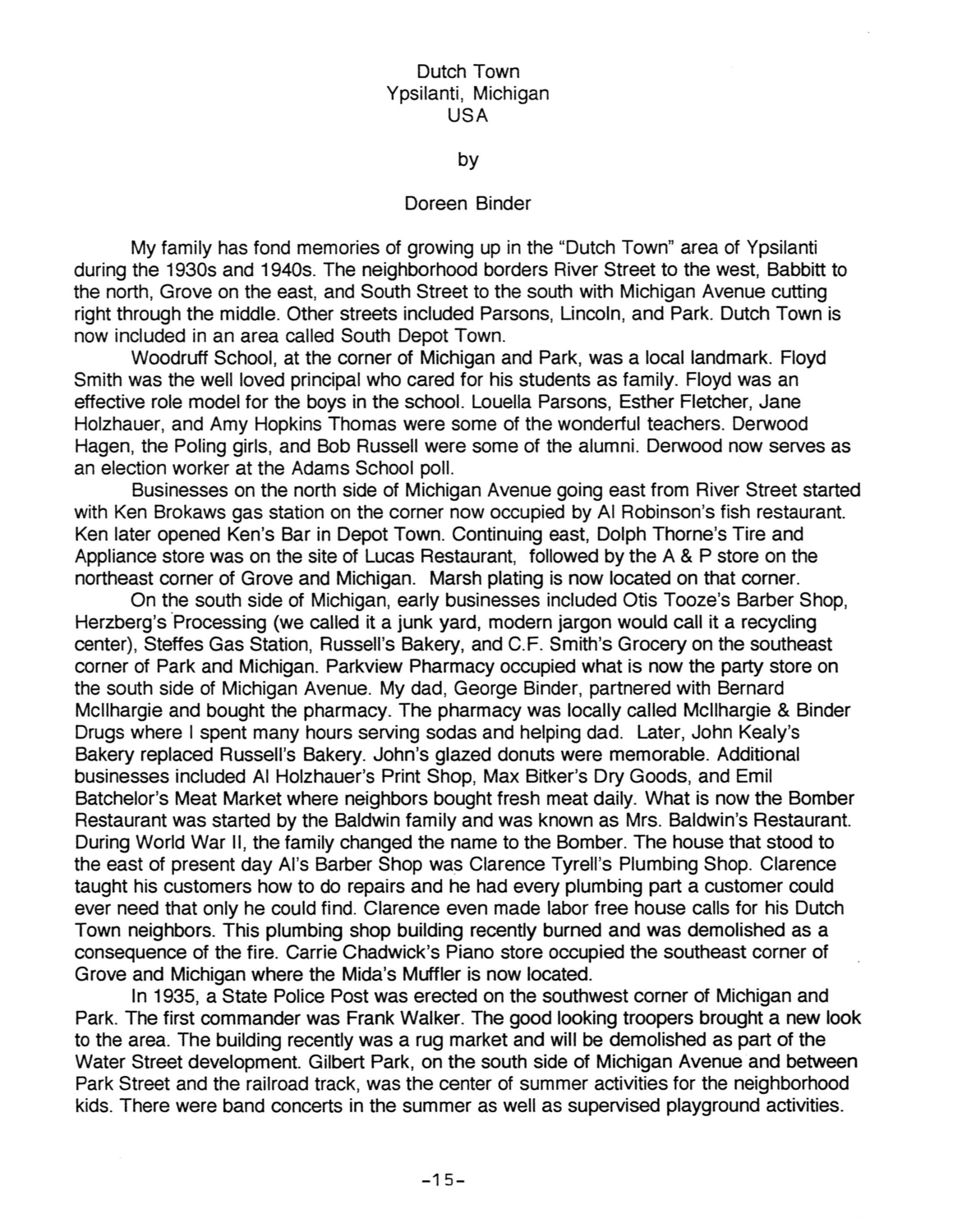 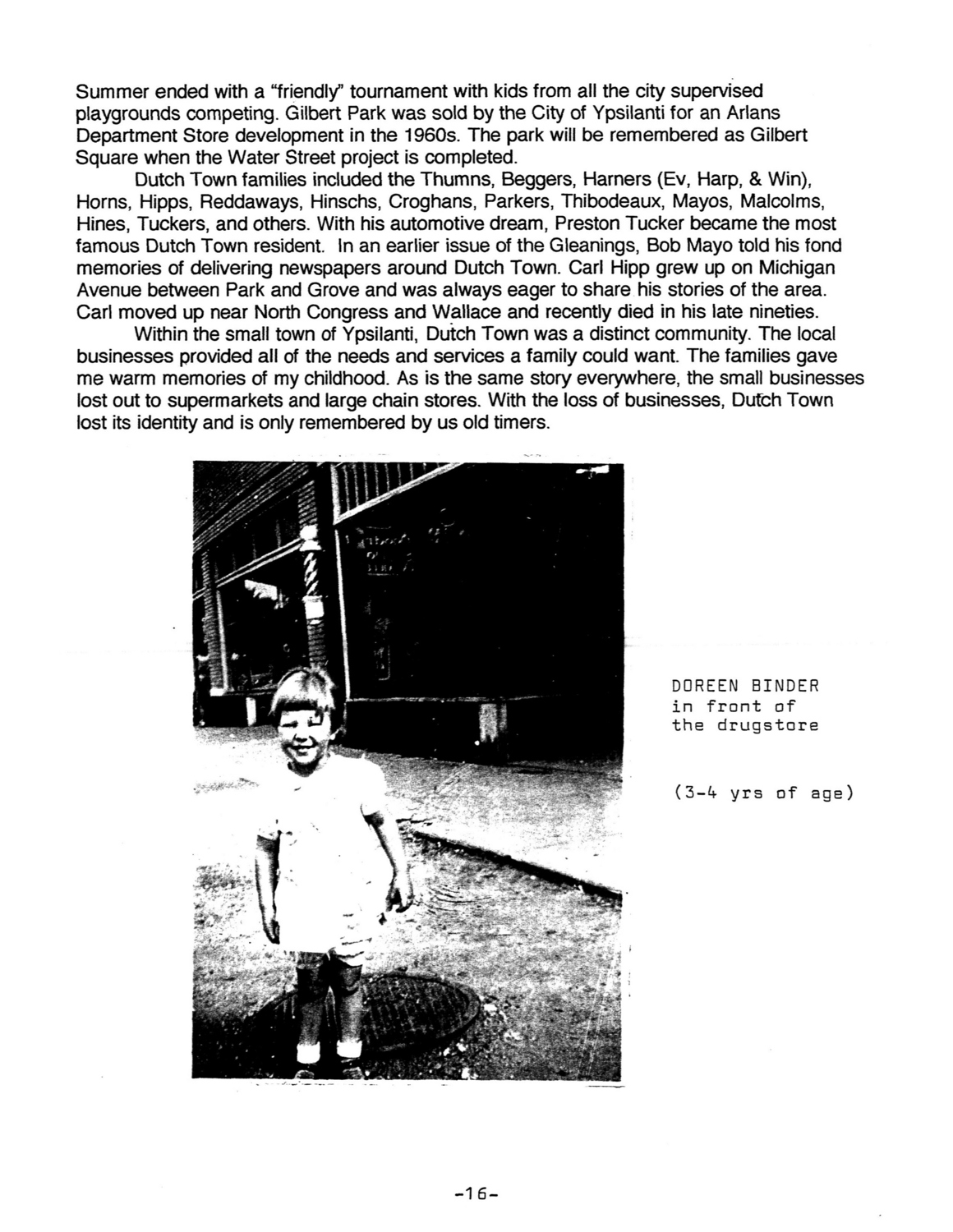 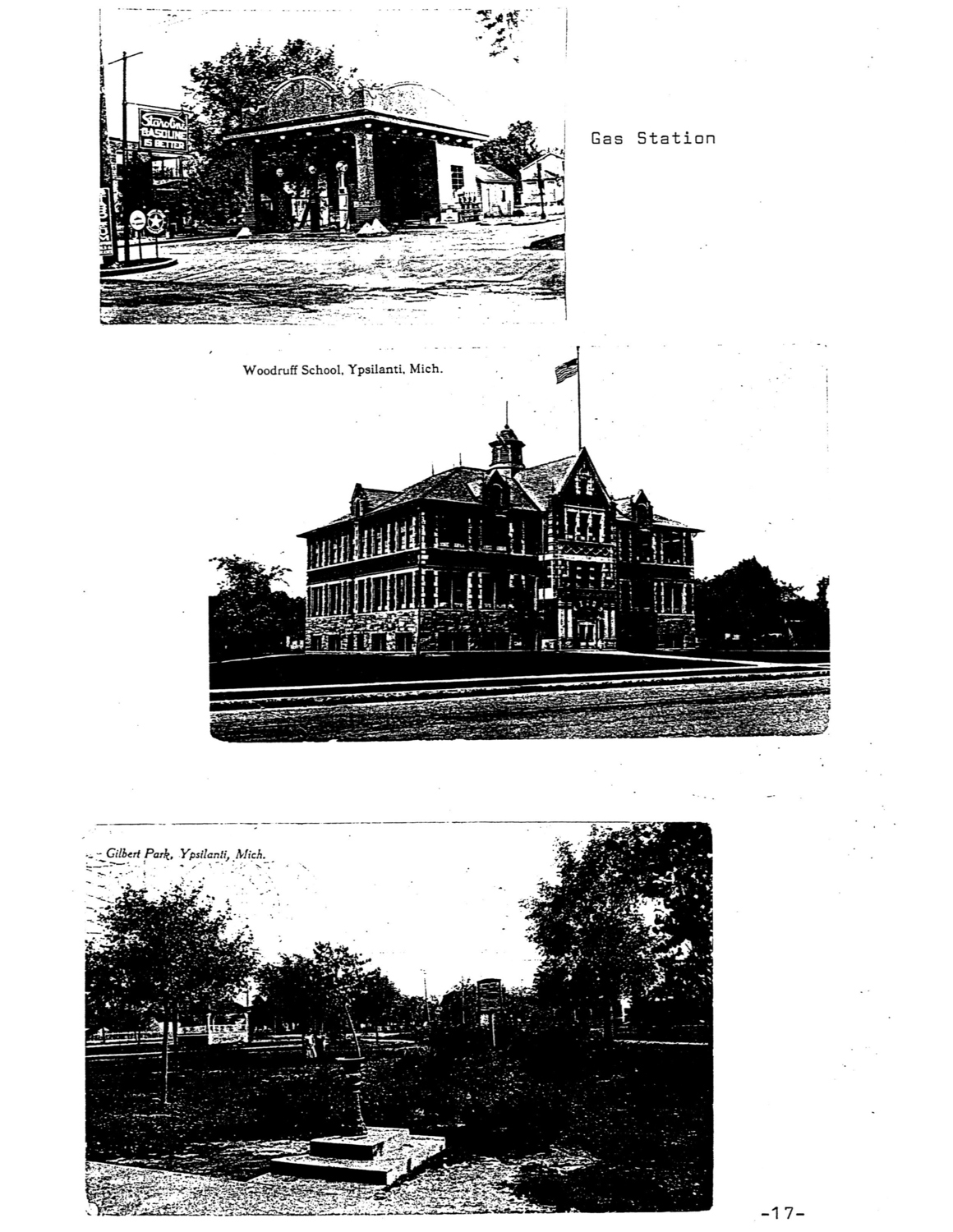 My family has fond memories of growing up in the “Dutch Town” area of Ypsilanti during the 1930s and 1940s. The neighborhood borders River Street to the west, Babbitt to the north, Grove on the east, and South Street to the south with Michigan Avenue cutting right through the middle. Other streets included Parsons, Lincoln, and Park. Dutch Town is now included in an area called South Depot Town.

Woodruff School, at the corner of Michigan and Park, was a local landmark. Floyd Smith was the well loved principal who cared for his students as family. Floyd was an effective role model for the boys in the school. Louella Parsons, Esther Fletcher, Jane Holzhauer, and Amy Hopkins Thomas were some of the wonderful teachers. Derwood Hagen, the Poling girls, and Bob Russell were some of the alumni. Derwood now serves as an election worker at the Adams School poll.

Businesses on the north side of Michigan Avenue going east from River Street started with Ken Brokaws gas station on the corner now occupied by Al Robinson's fish restaurant. Ken later opened Ken's Bar in Depot Town. Continuing east, Dolph Thorne's Tire and Appliance store was on the site of Lucas Restaurant, followed by the A & P store on the northeast corner of Grove and Michigan. Marsh plating is now located on that corner.

On the south side of Michigan, early businesses included Otis Tooze's Barber Shop, Herzberg's Processing (we called it a junk yard, modern jargon would call it a recycling center), Steffes Gas Station, Russell's Bakery, and C.F. Smith's Grocery on the southeast corner of Park and Michigan. Parkview Pharmacy occupied what is now the party store on the south side of Michigan Avenue. My dad, George Binder, partnered with Bernard Mcllhargie and bought the pharmacy. The pharmacy was locally called Mcllhargie & Binder Drugs where I spent many hours serving sodas and helping dad. Later, John Kealy's Bakery replaced Russell's Bakery. John's glazed donuts were memorable. Additional businesses included Al Holzhauer's Print Shop, Max Bitker's Dry Goods, and Emil Batchelor's Meat Market where neighbors bought fresh meat daily. What is now the Bomber Restaurant was started by the Baldwin family and was known as Mrs. Baldwin's Restaurant. During World War II, the family changed the name to the Bomber. The house that stood to the east of present day Al's Barber Shop was Clarence Tyrell's Plumbing Shop. Clarence taught his customers how to do repairs and he had every plumbing part a customer could ever need that only he could find. Clarence even made labor free house calls for his Dutch Town neighbors. This plumbing shop building recently burned and was demolished as a consequence of the fire. Carrie Chadwick's Piano store occupied the southeast corner of Grove and Michigan where the Mida's Muffler is now located.

In 1935, a State Police Post was erected on the southwest corner of Michigan and Park. The first commander was Frank Walker. The good looking troopers brought a new look to the area. The building recently was a rug market and will be demolished as part of the Water Street development. Gilbert Park, on the south side of Michigan Avenue and between Park Street and the railroad track, was the center of summer activities for the neighborhood kids. There were band concerts in the summer as well as supervised playground activities.

Summer ended with a “friendly” tournament with kids from all the city supervised playgrounds competing. Gilbert Park was sold by the City of Ypsilanti for an Arlans Department Store development in the 1960s. The park will be remembered as Gilbert Square when the Water Street project is completed.

Dutch Town families included the Thumns, Beggers, Harners (Ev, Harp, & Win), Horns, Hipps, Reddaways, Hinschs, Croghans, Parkers, Thibodeaux, Mayos, Malcolms, Hines, Tuckers, and others. With his automotive dream, Preston Tucker became the most famous Dutch Town resident. In an earlier issue of the Gleanings, Bob Mayo told his fond memories of delivering newspapers around Dutch Town. Carl Hipp grew up on Michigan Avenue between Park and Grove and was always eager to share his stories of the area. Carl moved up near North Congress and Wallace and recently died in his late nineties.

Within the small town of Ypsilanti, Dutch Town was a distinct community. The local businesses provided all of the needs and services a family could want. The families gave me warm memories of my childhood. As is the same story everywhere, the small businesses lost out to supermarkets and large chain stores. With the loss of businesses, Dutch Town lost its identity and is only remembered by us old timers.