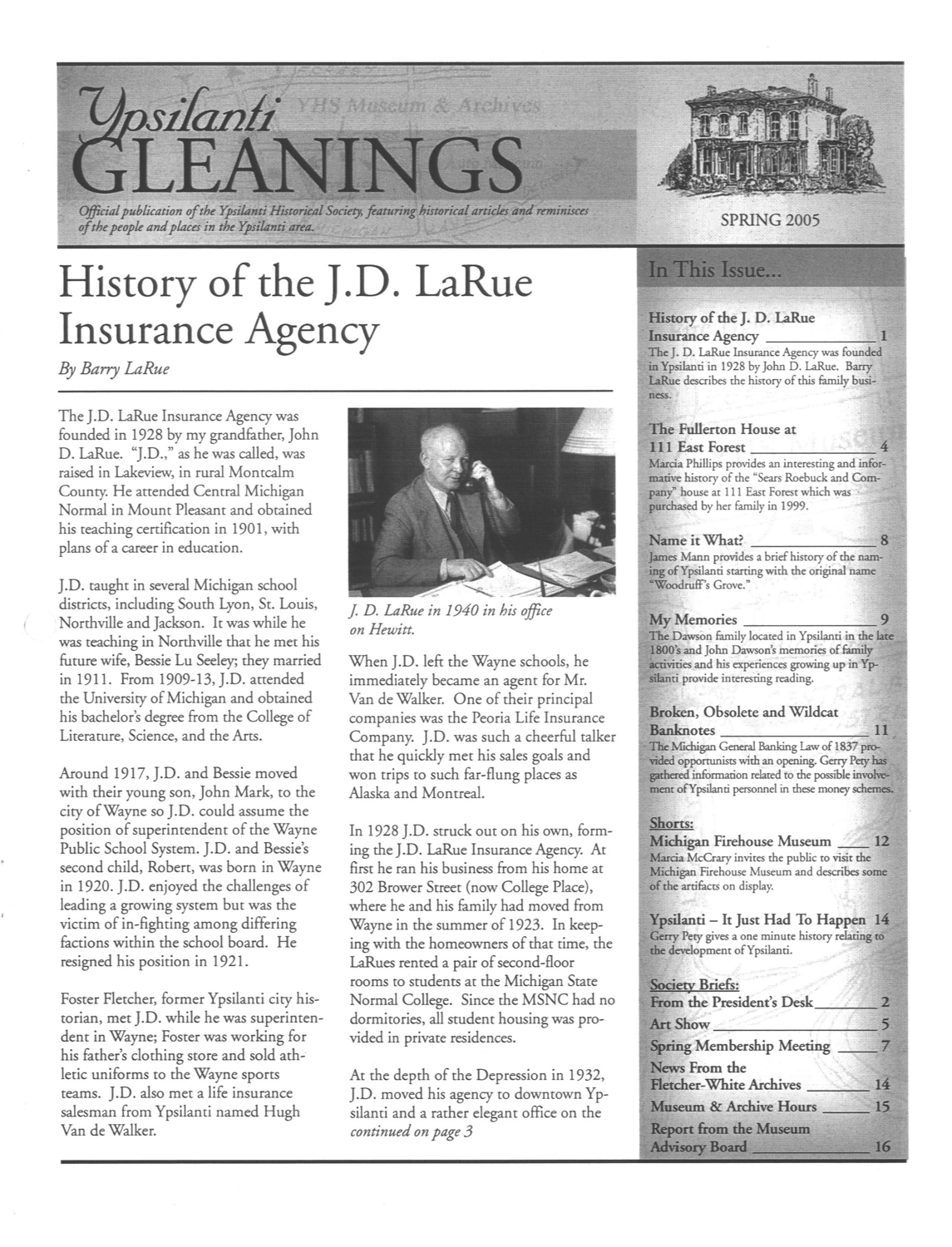 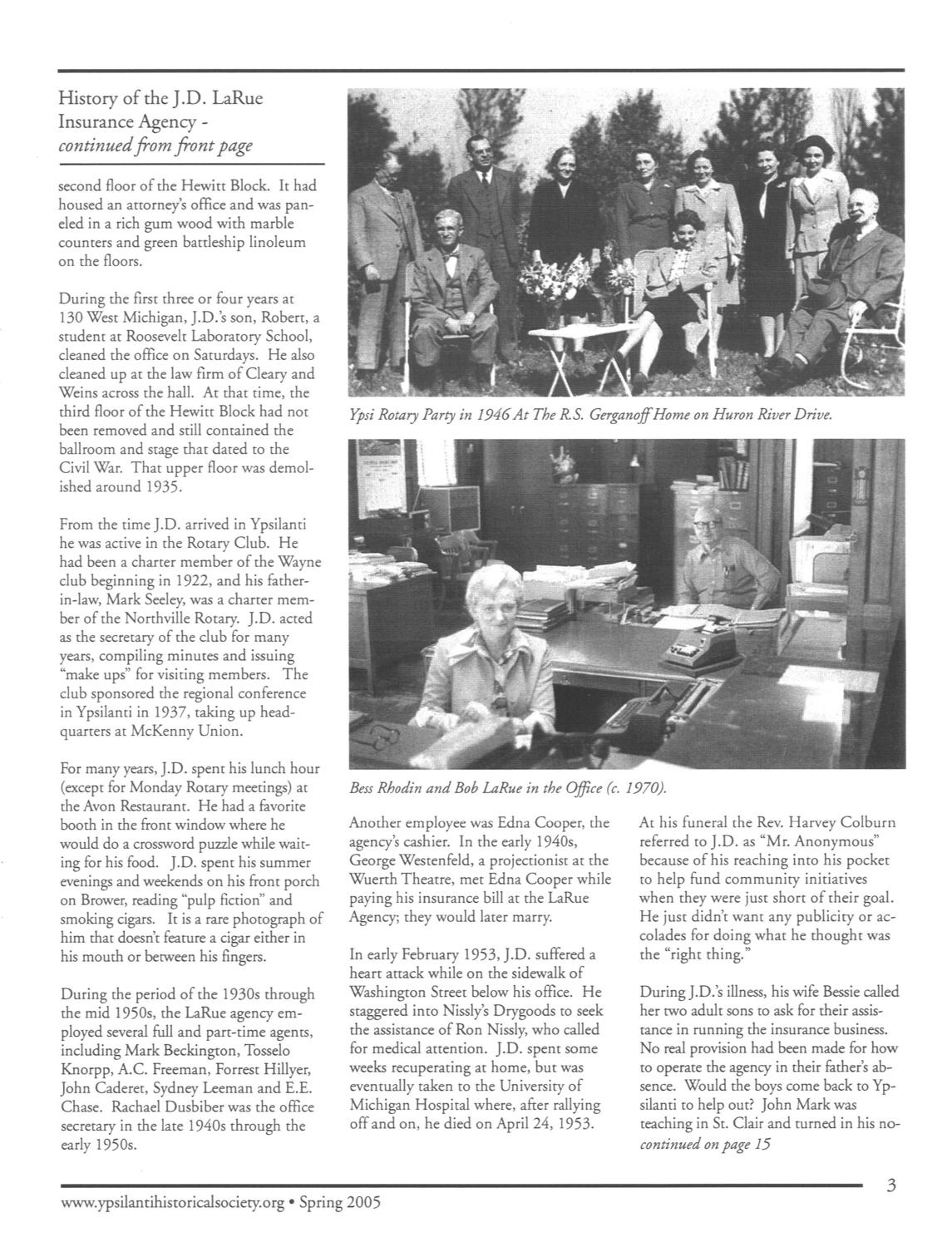 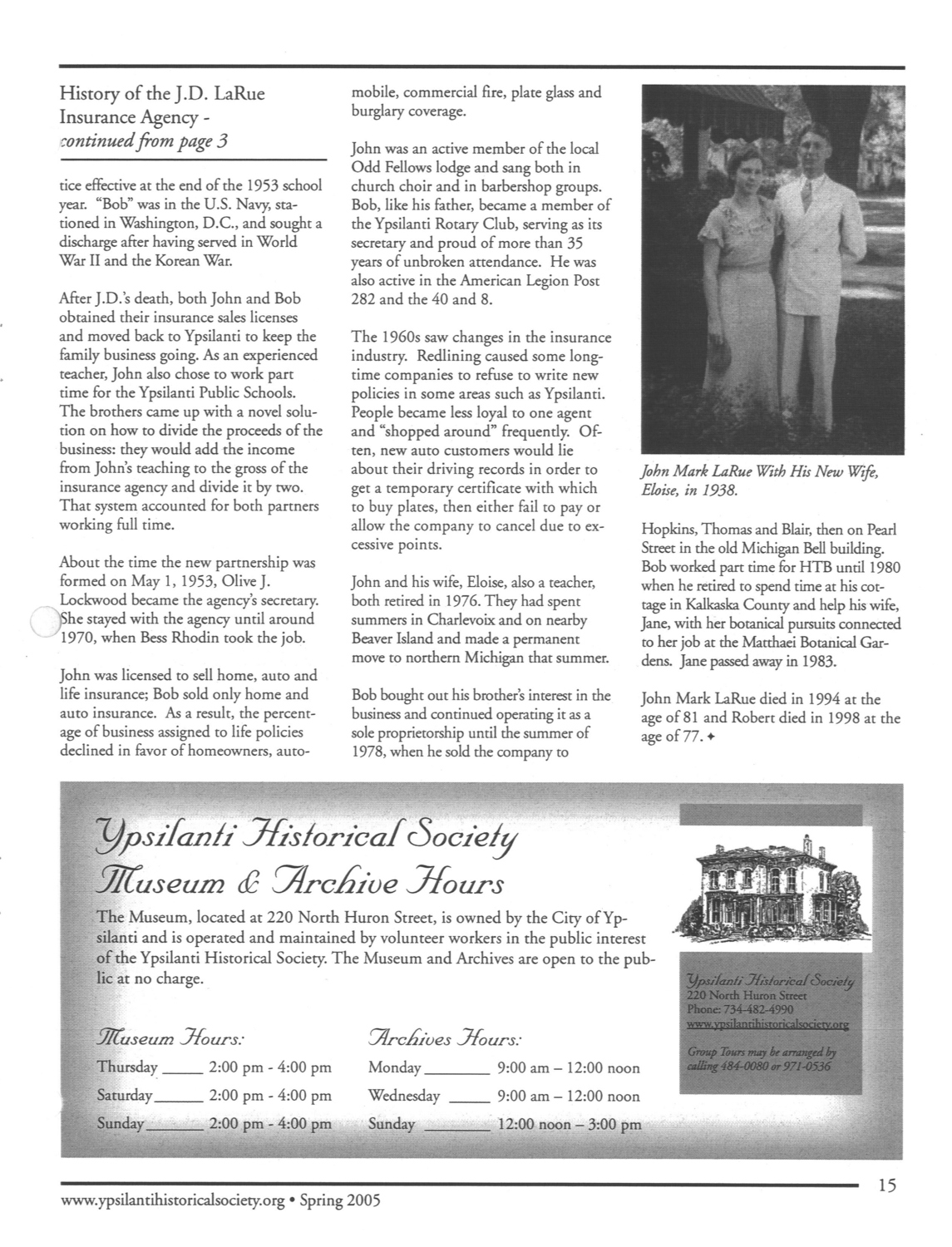 The J.D. LaRue Insurance Agency was founded in 1928 by my grandfather, John D. LaRue. “J.D.,” as he was called, was raised in Lakeview, in rural Montcalm County. He attended Central Michigan Normal in Mount Pleasant and obtained his teaching certification in 1901, with plans of a career in education.

J.D. taught in several Michigan school districts, including South Lyon, St. Louis, Northville and Jackson. It was while he was teaching in Northville that he met his future wife, Bessie Lu Seeley; they married in 1911. From 1909–13, J.D. attended the University of Michigan and obtained his bachelor's degree from the College of Literature, Science, and the Arts.

Around 1917, J.D. and Bessie moved with their young son, John Mark, to the city of Wayne so J.D. could assume the position of superintendent of the Wayne Public School System. J.D. and Bessie's second child, Robert, was born in Wayne in 1920. J.D. enjoyed the challenges of leading a growing system but was the victim of in-fighting among differing factions within the school board. He resigned his position in 1921.

When J.D. left the Wayne schools, he immediately became an agent for Mr. Van de Walker. One of their principal companies was the Peoria Life Insurance Company. J.D. was such a cheerful talker that he quickly met his sales goals and won trips to such far-flung places as Alaska and Montreal.

In 1928 J.D. struck out on his own, forming the J.D. LaRue Insurance Agency. At first he ran his business from his home at 302 Brower Street (now College Place), where he and his family had moved from Wayne in the summer of 1923. In keeping with the homeowners of that time, the LaRues rented a pair of second-floor rooms to students at the Michigan State Normal College. Since the MSNC had no dormitories, all student housing was provided in private residences.

At the depth of the Depression in 1932, J.D. moved his agency to downtown Ypsilanti and a rather elegant office on the second floor of the Hewitt Block. It had housed and attorney's office and was paneled in a rich gum wood with marble counters and green battleship linoleum on the floors.

During the first three or four years at 130 West Michigan, J.D.'s son, Robert, a student at Roosevelt Laboratory School, cleaned the office on Saturdays. He also cleaned up at the law firm of Cleary and Weins across the hall. At that time, the third floor of the Hewitt Block had not been removed and still contained the ballroom and stage that dated to the Civil War. That upper floor was demolished around 1935.

From the time J.D. arrived in Ypsilanti he was active in the Rotary Club. He had been a charter member of the Wayne club beginning in 1922, and his father-in-law, Mark Seeley, was a charter member of the Northville Rotary. J.D. acted as the secretary of the club for many years, compiling minutes and issuing “make ups” for visiting members. The club sponsored the regional conference in Ypsilanti in 1937, taking up headquarters at McKenny Union.

For many years, J.D. spent his lunch hour (except for Monday Rotary meetings) at the Avon Restaurant. He had a favorite booth in the front window where he would do a crossword puzzle while waiting for his food. J.D. spent his summer evenings and weekends on his front porch on Brower, reading “pulp fiction” and smoking cigars. It is a rare photograph of him that doesn't feature a cigar either in his mouth or between his fingers.

During the period of the 1930s through the mid 1950s, the LaRue agency employed several full and part-time agents, including Mark Beckington, Tosselo Knorpp, A.C. Freeman, Forrest Hillyer, John Caderet, Sydney Leeman and E.E. Chase. Rachael Dusbiber was the office secretary in the late 1940s through the early 1950s.

Ypsi Rotary Party in 1946 At The R.S Gerganoff Home on Huron River Drive.
Bess Rhodin and Bob LaRue in the Office (c. 1970).

Another employee was Edna Cooper, the agency's cashier. In the early 1940s, George Westenfeld, a projectionist at the Wuerth Theatre, met Edna Cooper while paying his insurance bill at the LaRue Agency; they would later marry.

In early February 1953, J.D. suffered a heart attack while on the sidewalk of Washington Street below his office. He staggered into Nissly's Drygoods to seek the assistance of Ron Nissly, who called for medical attention. J.D. spent some weeks recuperating at home, but was eventually taken to the University of Michigan Hospital where, after rallying off and on, he died on April 24, 1953.

At his funeral the Rev. Harvey Colburn referred to J.D. as “Mr. Anonymous” because of his reaching into his pocket to help fund community initiatives when they were just short of their goal. He just didn't want any publicity or accolades for doing what he thought was the “right thing.”

During J.D.'s illness, his wife Bessie called her two adult sons to ask for their assistance in running the insurance business. No real provision had been made for how to operate the agency in their father's absence. Would the boys come back to Ypsilanti to help out? John Mark was teaching in St. Clair and turned in his notice effective at the end of the 1953 school year. “Bob” was in the U.S. Navy, stationed in Washington, D.C., and sought a discharge after having served in World War II and the Korean War.

After J.D.'s death, both John and Bob obtained their insurance sales licenses and moved back to Ypsilanti to keep the family business going. As an experienced teacher, John also chose to work part time for the Ypsilanti Public Schools. The brothers came up with a novel solution on how to divide the proceeds of the business: they would add the income from John's teaching to the gross of the insurance agency and divide it by two. That system accounted for both partners working full time.

About the time the new partnership was formed on May 1, 1953, Olive J. Lockwood became the agency's secretary. She stayed with the agency until around 1970, when Bess Rhodin took the job.

John was licensed to sell home, auto and life insurance; Bob sold only home and auto insurance. As a result, the percentage of business assigned to life policies declined in favor of homeowners, automobile, commercial fire, plate glass and burglary coverage.

John was an active member of the local Odd Fellows lodge and sang both in church choir and in barbershop groups. Bob, like his father, became a member of the Ypsilanti Rotary Club, serving as its secretary and proud of more than 35 years of unbroken attendance. He was also active in the American Legion Post 282 and the 40 and 8.

The 1960s saw changes in the insurance industry. Redlining caused some long-time companies to refuse to write new policies in some areas such as Ypsilanti. People became less loyal to one agent and “shopped around” frequently. Often, new auto customers would lie about their driving records in order to get a temporary certificate with which to buy plates, then either fail to pay or allow the company to cancel due to excessive points.

John and his wife, Eloise, also a teacher, both retired in 1976. They had spent summers in Charlevoix and on nearby Beaver Island and made a permanent move to northern Michigan that summer.

Bob bought out his brother's interest in the business and continued operating it as a sole proprietorship until the summer of 1978, when he sold the company to Hopkins, Thomas and Blair, then on Pearl Street in the old Michigan Bell building. Bob worked part time for HTB until 1980 when he retired to spend time at his cottage in Kalkaska County and help his wife, Jane, with her botanical pursuits connected to her job at the Matthaei Botanical Gardens. Jane passed away in 1983.